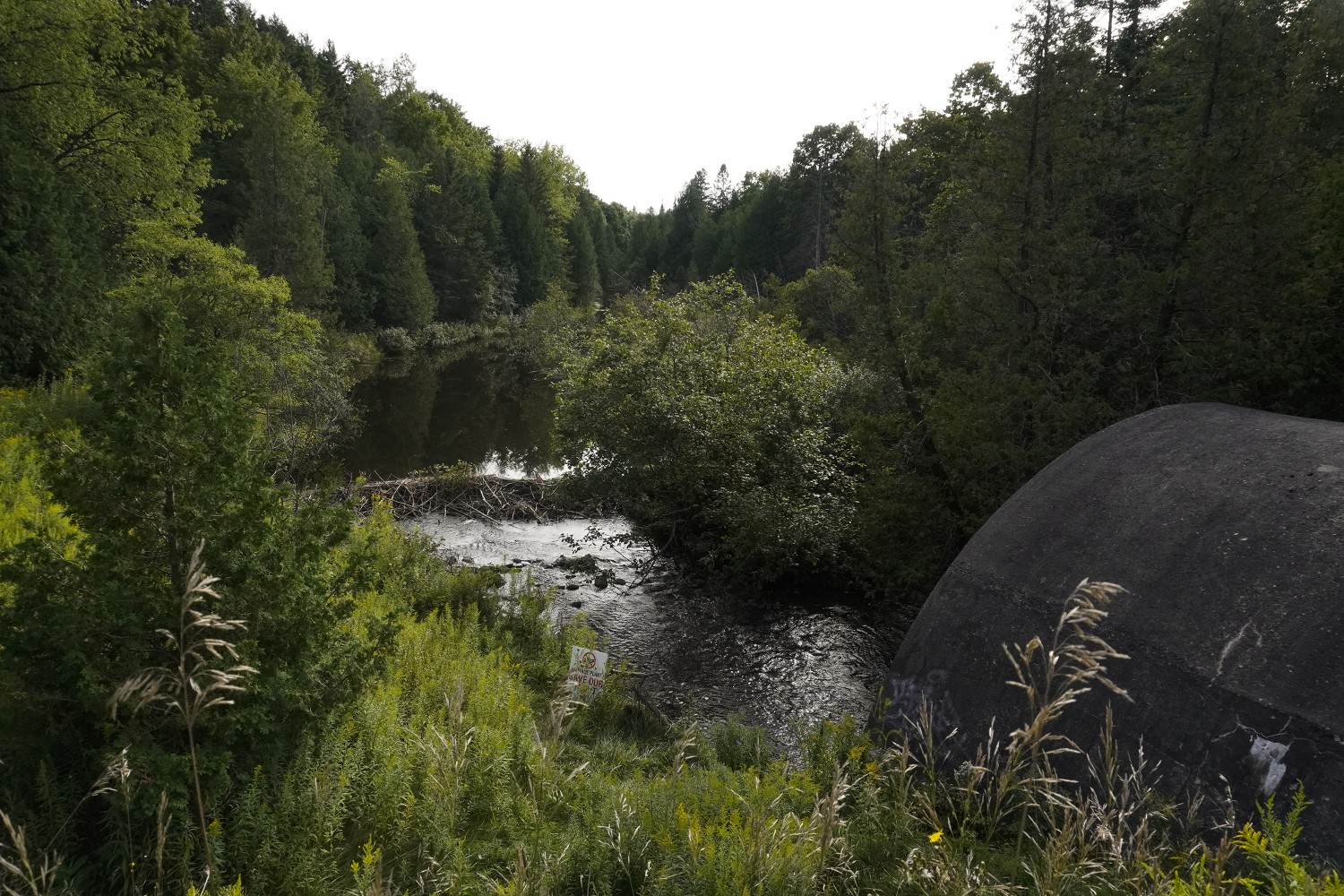 By 2051, the population of the Greater Golden Horseshoe is expected to reach 15 million people, an increase of about 50 percent.

The greatest test for cities in Ontario’s most populous region will be puzzling out how to accommodate this unprecedented surge in growth. The answer? It depends who you ask. Some development companies want to turn Ontario’s remaining luscious greenspaces into sprawling subdivisions. Smart growth proponents want to see the opposite; dense, walkable, green cities that exemplify what has increasingly become known as the “complete community”. Others land somewhere in the middle, claiming the crux lies in finding a balance between the need for environmental conservation in the face of climate change; meeting the market demand for single-family homes; and solving the existing affordable housing crisis that may only get worse as more people flood to the region. According to Hemson, forecasts show that the Greater-Toronto-Hamilton area population will reach nearly 11.2 million by 2051, when the outer ring is added, the figure will be almost 15 million. 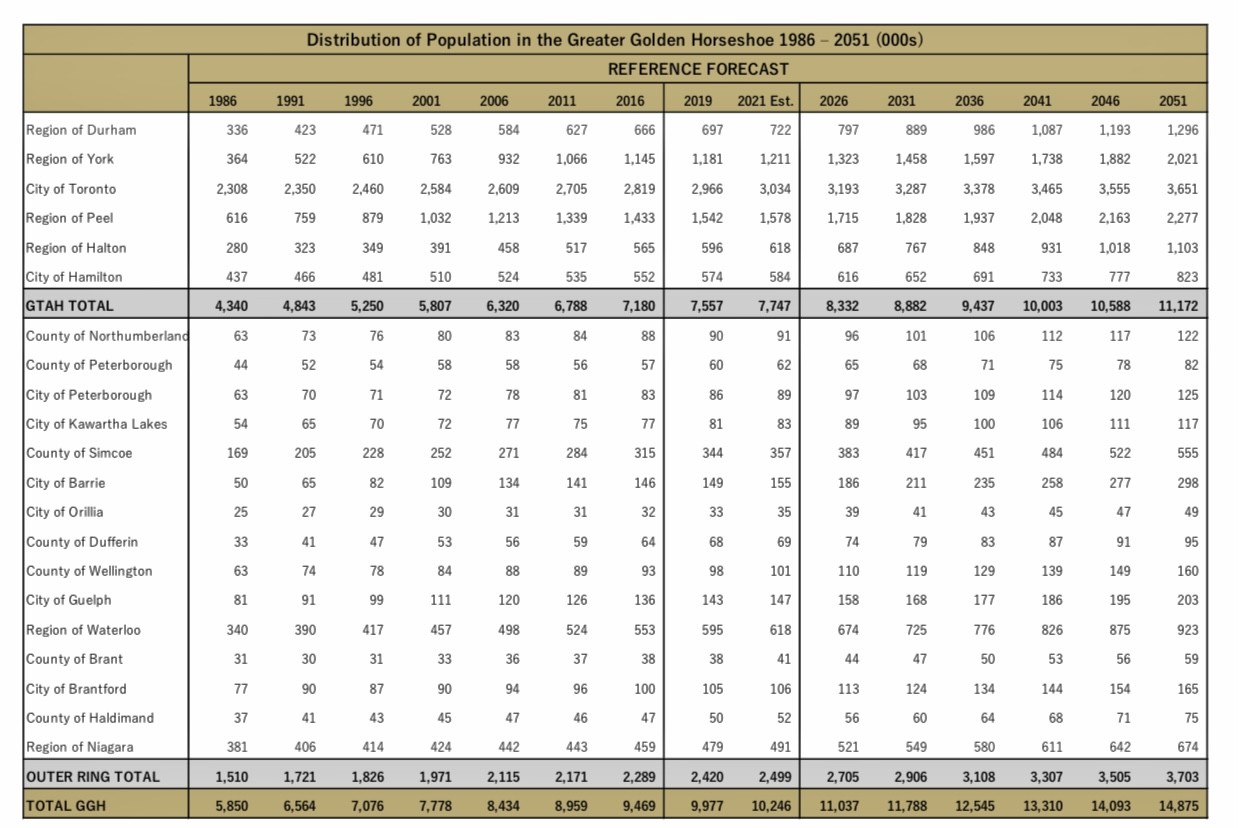 A new tool is looking to help decision makers with this most existential of questions, analyzing the remaining land left in the GTA, a space it has labelled the “contested countryside”, and using different growth scenarios in an attempt to predict what Ontario could look like over the next three decades.

Andrew McCammon, executive director of the Ontario Headwaters Institute, worked with students at Fleming College to create a tool that compares these different growth scenarios—full urban buildout, a maximum conservation approach and a balanced approach—in an attempt to provide insight into their potential outcomes.

“Without getting into the finite details, this is, to our way of mind, really irresponsible,” McCammon said. 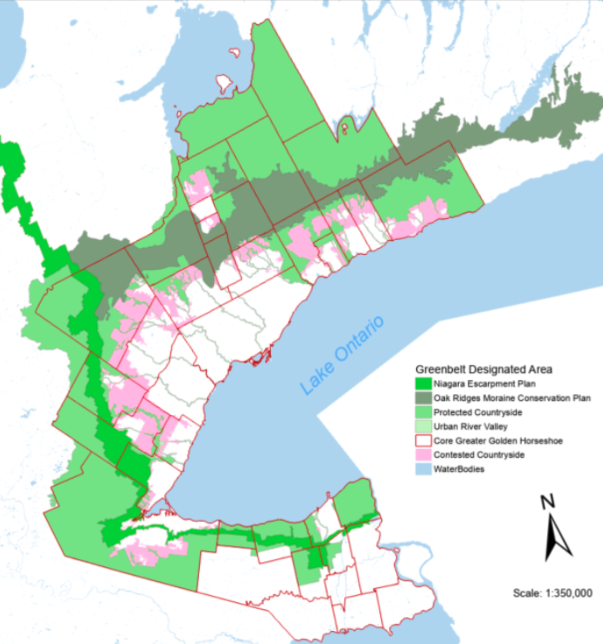 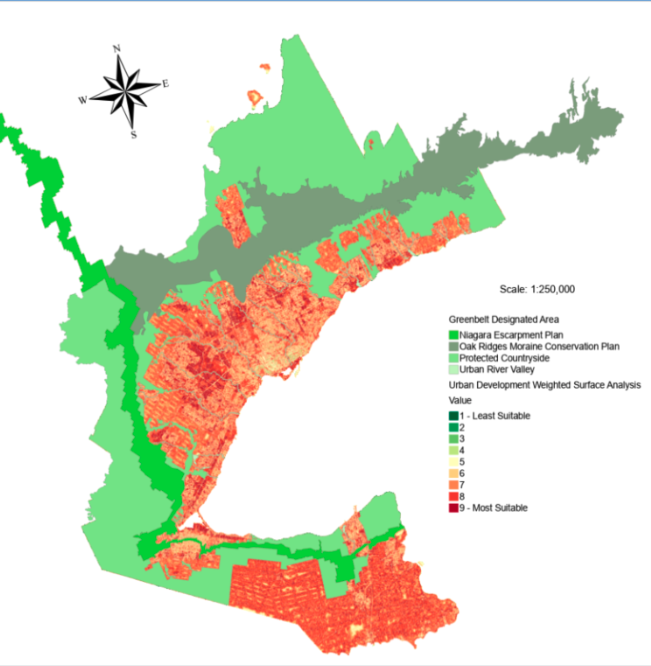 Top: the GTHA as it is today with the “contested countryside” highlighted in pink. Above: A maximum urban buildout would see all of the remaining space to the edges of the Greenbelt fully developed.

The second scenario is the maximum conservation scenario, which would only leave 1.57 percent of the “contested countryside”open for development. McCammon admits this is also not a reasonable approach to accommodating growth.

The final scenario is the balanced approach, which leaves approximately eight percent of the “contested countryside” for development. 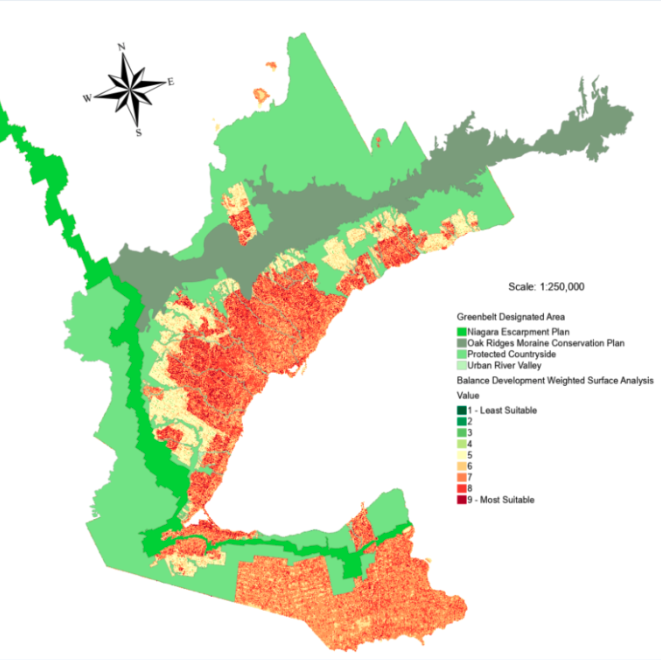 The balanced approach to growth would allow for natural heritage to be protected while accommodating a large portion of Ontario’s future growth within the existing urban boundaries.

McCammon said he plans to share these maps with newly elected municipal councils in November. But his real hope is that the maps will be used by citizens who want to hold elected leaders accountable for their decision making around development and growth—particularly when a large majority of municipal councillors are receiving donations from developers to fund their election campaigns.

"This tool is for the people who fight locally,” McCammon says. “Our primary audience is the local groups that will be wading into these discussions…Our tool has been designed to pass this off to the groups that have local credibility, who might know the councillors first name, and can give her a call.”

Development and questions about growth have dominated discussions around many municipal council chambers over the last four years in the GTHA. Whether it’s urban boundary expansion in Peel, or Highway 413 and the urban sprawl it will bring along with it, or which developers should receive assistance to get their projects off the ground in Niagara Region, McCammon hopes these maps can provide a bit of a crystal ball into the future for municipal decision makers to see the potential consequences of their decisions.

With the Province forcing municipalities to plan using a 30 year horizon—something urban planning experts have described as “unprecedented”—McCammon says the need to consider the degradation to our natural systems is crucial, but admits that can be next to impossible when plans are created to last a three-decade span.

“If they want to go beyond short term bursts of development, based on now 10-year-old planning protocols, then they really need to figure out how to address the natural heritage strategies, biodiversity strategy, the green development standards and climate change,” he said. “So if they don't want to do that, that tells you where we're headed.”

The PC vision for Ontario’s future was made clear before Premier Doug Ford was elected in 2018. A leaked video of the soon-to-be premier went viral where he promised a room full of developers that he would open up large chunks of the Greenbelt for growth. It was a statement he later walked back, but over the last four years, the PCs have done everything in their power to weaken environmental legislation and create a planning regime that favours developers looking to carpet Ontario’s remaining farmland and greenspace with unsustainable sprawling subdivisions.

“The government’s “sprawl recipe” mirrors and checks off the elements found in industry’s multi-year efforts. First, reinstitute old developer friendly OMB rules, increase campaign contribution limits and fee for appearance fundraisers. Second, significantly weaken the Growth Plan intensification and greenfield density targets—reduced by 20 percent and 40 percent, respectively. Third, increase the planning horizon to 2051—a 30 percent increase from 20 years to an unprecedented three decades. Fourth, issue population forecasts which direct 1 million more people to suburban municipalities from more urban ones. Fifth, release a housing forecast which substantially increases projected single-detached houses and decreases apartments for each and every year for the next 30 years contrary to trends of the last 10-15 years and the fact most households cannot afford single detached houses. Sixth, issue a Land Needs Methodology directing municipalities to use these metrics,” wrote Victor Doyle in an op-ed published in The Pointer in June. Doyle is the former provincial Manager of Planning for Central Ontario and Lead Planner of the Greenbelt Plan.

Peel is currently seeing the fruits of this PC labour, with subdivision applications flooding in. For example, the Southfields development along Kennedy Road between Old School Road and Mayfield Road is crammed with single family dwellings with two car garages, but contains no grocery stores or drug stores. This means families have to own cars to travel to get what they need, often travelling south into Brampton.

“We have a critical mass of intellectual inertia stuck in the 1960s to grow the way we've always grown,” said McCammon. “Let's allow for some growth, but not to 2051 over 11,000 acres in Peel. Let's let some development happen, but let's start developing the long term protocols.”

The long term protocols McCammon is talking about have to do with protecting critical greenspaces. Peel is home to some of the most fertile soil in Ontario and yet the region is facing a food security crisis. In the last year, the Mississauga Food Bank saw a 50 percent increase in visits to its 50 plus locations and there was a 22 percent increase in the amount of food distributed. The volume of food the organization distributes annually has increased 400 percent since 2014. According to the Statistics Canada Consumer Price Index for May, consumers paid 9.7 percent more for food over the past year. The less food that can be grown locally, the costlier it will be when buyers pull it off the shelves, as they must also cover rising distribution and fuel prices in order to get that carrot, apple or packet of strawberries from the farm to the shelf.

Food security is only one of the issues that McCammon recognizes could be exacerbated by increased development. Another major issue is the effect on our watersheds.

“We really need to protect long term food security, make sure the watersheds don't pass tipping points of pollution and flash floods that threaten infrastructure, and that provide a basis through their wetlands and forests for climate resiliency.”

The threat of urban growth to Ontario’s natural spaces was a recent topic of discussion at the Great Lakes Forum, held from September 27 to 29 in Niagara Falls.  The Forum, which is held every three years, brings together stakeholders, government agencies, First Nations and members of the public from the United States and Canada to discuss progress on protecting the Great Lakes.

Scientists have known for years about the negative effects of urban centres on lakes Huron, Ontario, Superior Michigan and Erie, including chemical contaminants, erosion and habitat loss. These consequences will only amass with a continued growth in population.

According to the 2021 State of the Great Lakes Report, the number of people living in the Great Lakes basin has increased by 26 percent since the 1970s. A large portion of this growth is happening around Lake Ontario. 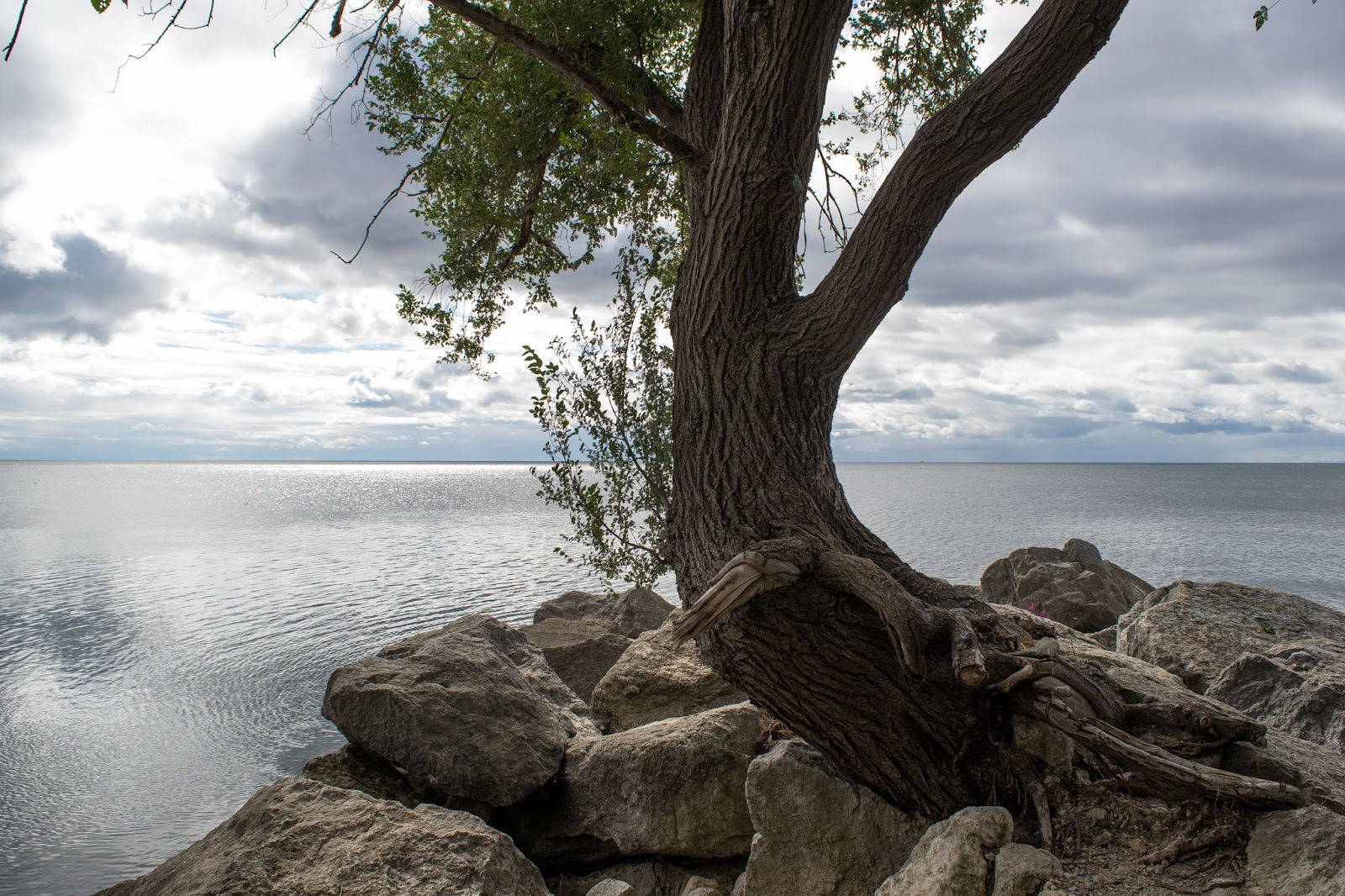 Lake Ontario is expected to see the number of people living along its coastline surge over the next two decades.

A major concern for McCammon is what will happen to the watersheds as development encroaches further upstream and away from the Great Lakes.

“Everything downstream has polluted water. The agriculture is pretty much gone, and the natural heritage is fragmented. And so species can't migrate or interbreed or have enough of a footprint of natural space to live and survive for more than a few years. So we really believe that the protocols of land development need to change.”

While much of the GTHA’s northern reaches remain green and healthy—providing critical support to the southern, less health areas—the harbingers of rapid urban growth have arrived, with key infrastructure projects underway that could accelerate urban expansion exponentially.

In Erin a new wastewater treatment facility is being built. It’s billed as a necessity to support the population growth over the next two decades. The effluent from this plant will be dumped directly into the Credit River. There is a fear that warming water will affect brook trout populations. According to the Town of Erin and the engineering company WSP, effluent will be cooled to a maximum of 19 degrees which was declared suitable for the health of brook trout, but many are still concerned this will not be enough to completely protect the fish. 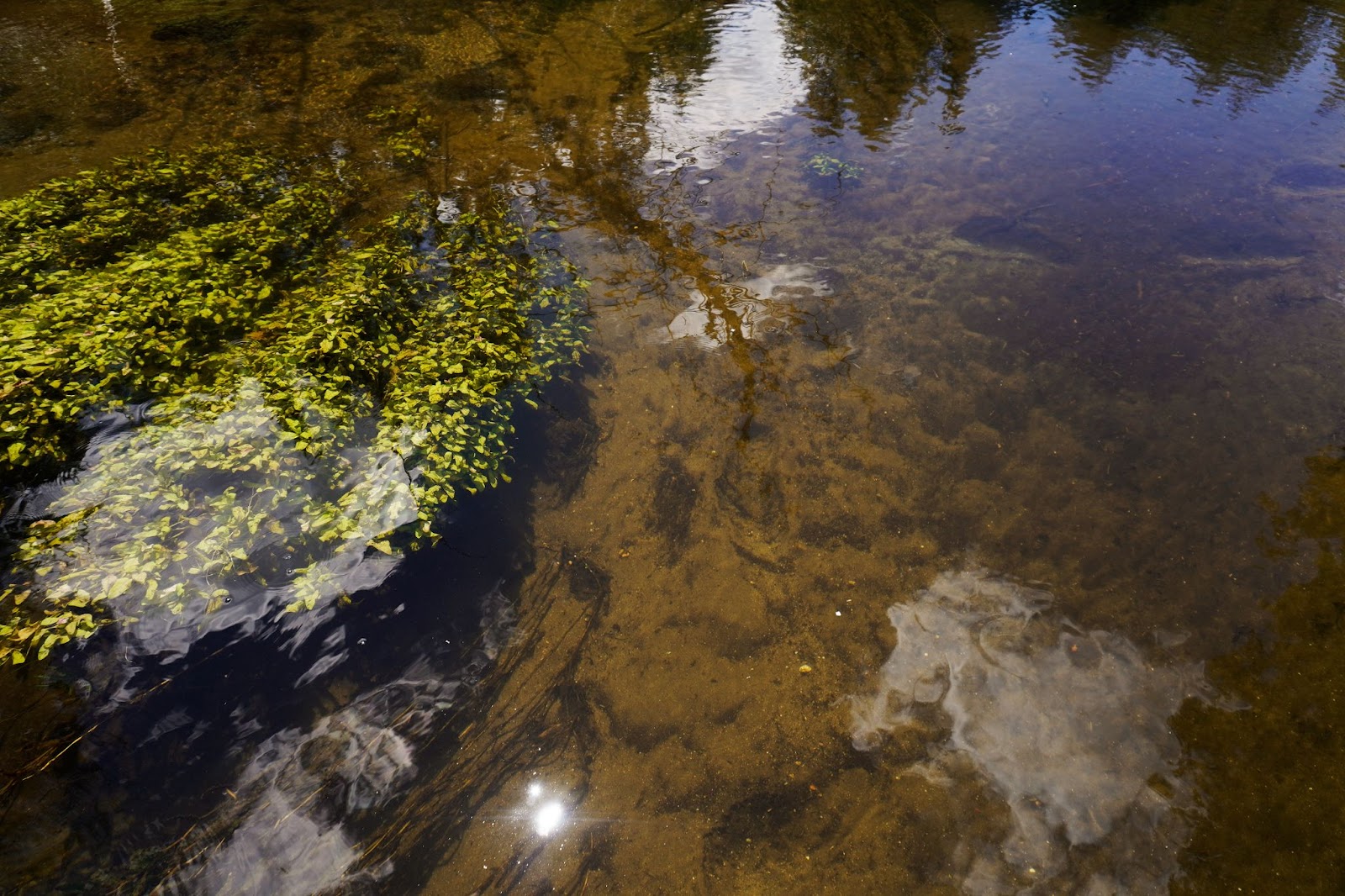 The Credit River is the last remaining spawning grounds for the Brook Trout, which need cold water temperatures to be able to lay their eggs, survive, and then hatch. The West Credit is their preferred route—as the east branch has faster currents and is impassable by a waterfall.

“We appear to have a government that is overly concerned about using development as an economic lever, rather than using wise judgment to predict and steward our natural heritage for future generations,” McCammon said

“[Ford’s] government just wants to move ahead with limited consultation, and using the executive authority for minister zoning orders to approve developments that haven't had proper appraisal, proper public consultation, and they've passed a law that says they can force a conservation authority to issue a permit, even if it is to pave a provincially significant wetland.”

McCammon cautions against being enticed by the economic benefits of development.

“We're in such a dangerous moment of economic uncertainty,” he said. “There's this speed, this juggernaut of development that we're facing right now…But we can't eat money, and this will push lots of our watersheds past tipping points.”