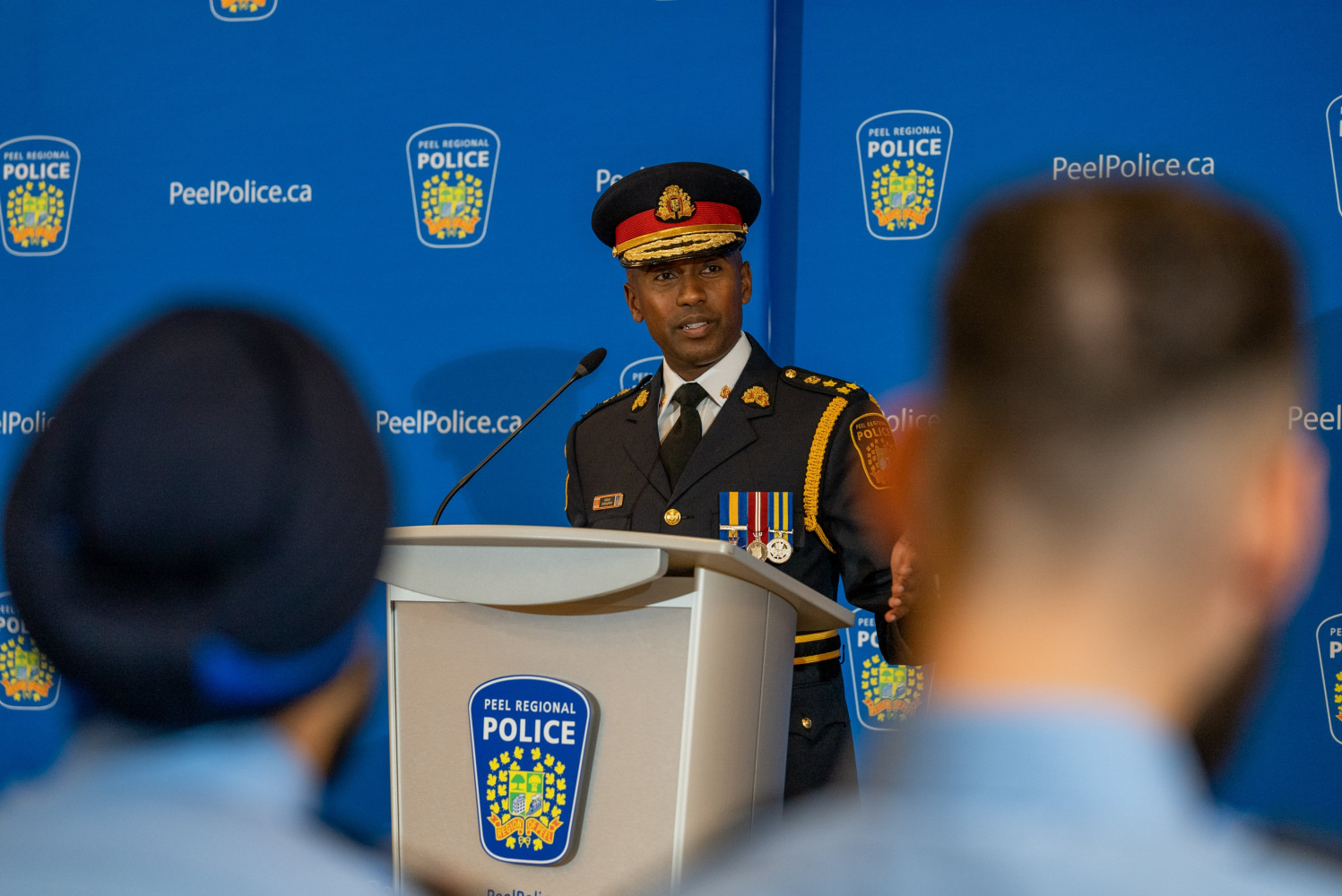 Addressing the Peel Police Services Board on Friday, Chief Nishan Duraiappah talked a lot about change.

Peel’s changing population—projected to increase 24 percent over the next decade. The region’s changing criminal landscape, which has seen a spike in many types of crime over the last five years, including shootings, up 59 percent; assaults, up 33 percent; frauds, up 44 percent; and car thefts, up 170 percent.

He stressed the need to expand the reach of Peel Regional Police by creating a new division in Brampton’s north end—PRP have been operating a four-division model since 1981, while the population of the two cities they serve has increased 227 percent over that time period. Duraiappah minced no words when detailing how the existing divisions were in need of a helping hand, especially the dilapidated Sir Robert Peel Centre.

“To say poor condition is an understatement,” he said.

Dealing with all of this change will not come cheap, and for some long-time Peel councillors, the 8.2 percent increase the PRP is requesting to its base budget for 2023 may not be the type of change they want to see. The request is almost double the status quo, as the PRP budget has increased, on average, by 4.4 percent between 2009 and 2020.

Since his arrival in Peel in late 2019, Chief Duraiappah has managed to keep budget increases fairly easy for regional councillors to swallow. The PRP has routinely taken up more than a quarter of the entire Region of Peel budget, but for the last two years, Duraiappah has kept his demands for funding below previous projections. The police saw a 5.4 percent increase in 2021 and a 4.8 percent jump in 2022. Both years saw Duraiappah scale back the number of new uniformed officers hired, while he has attempted to modernize the force with new technologies to streamline certain police processes, like evidence management, and transition certain roles away from sworn officers to civilians in order to put more uniforms on the frontlines and save money.

But the bill has apparently come due.

Speaking to the board on Friday, Duraiappah said the “conservative” requests over the last two years have put the organization behind and unable to keep up with the demands of Peel’s growing population. According to data from PRP, the number of calls to 911 have increased 45 percent over the last five years, along with increases to other priority calls like emergencies requiring an immediate dispatch (6 percent) and mental health calls (7 percent).

In order to push the PRP closer to accommodating the growing workload and the complex police response required to address these calls, Duraiappah is asking for an 8.2 percent increase to the police budget—it sat at about $485 million last year—which will result in 70 new officers and 50 new civilian positions. These new positions will help reduce the wait times for the public after calling for an officer to attend a crime scene, as well as reducing the number of people put on hold when they call 911, the chief says.

“This year’s ask represents a real need,” Duraiappah told the board. 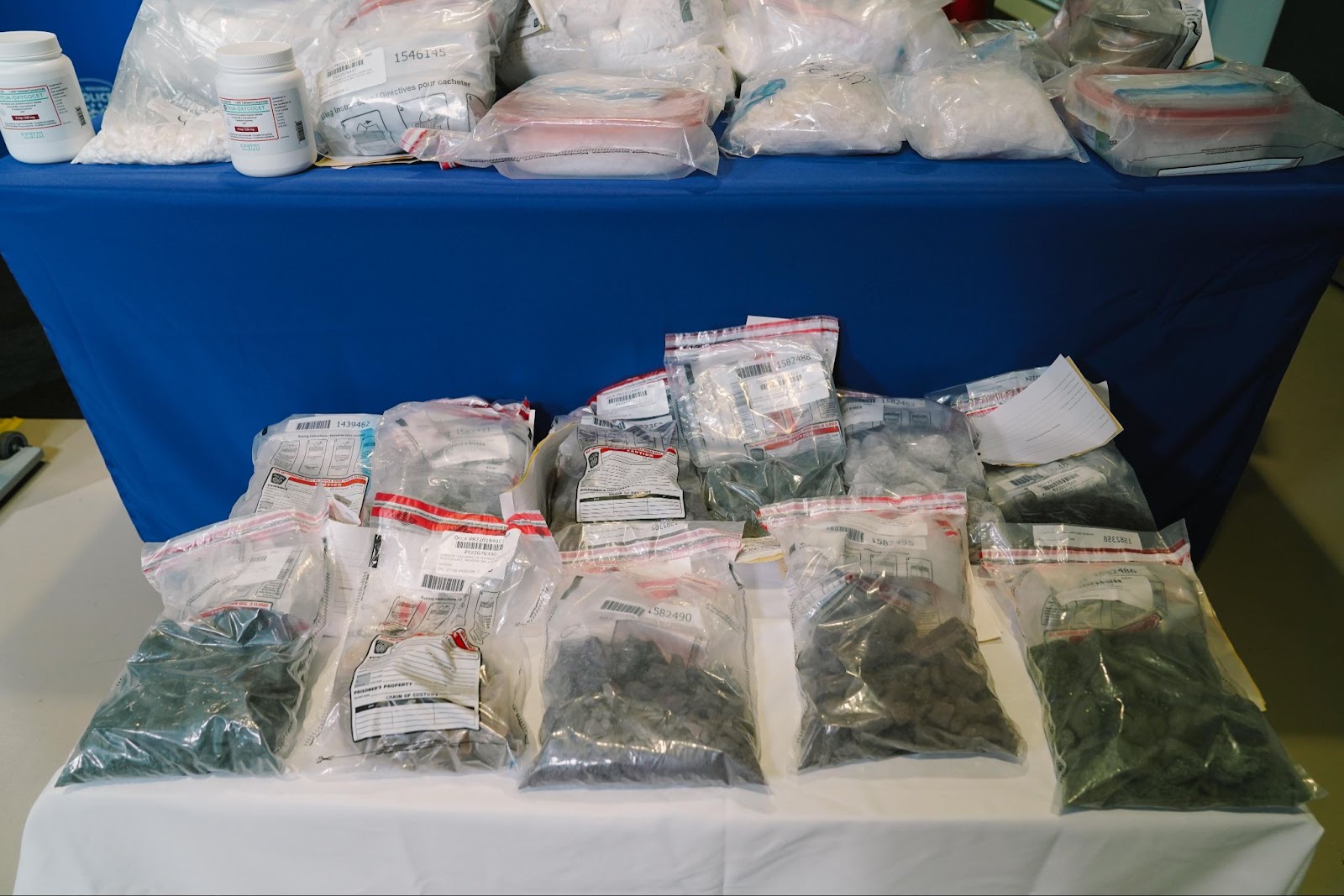 While attempting to manage the increase in daily calls for service, Peel Regional Police must also prioritize complex investigations into things like drug trafficking and organized crime.

It’s unclear how this request will sit with regional councillors who will have the final say on any increase when the police budget comes before them in the coming months. The requests granted in 2021 and 2022 were much lower, but still received pushback from elected officials who wanted to see things scaled back further. Now, after two years of pandemic impacts, which have put significant pressure on regional coffers, combined with the significant revenue hit projected from the approval of Bill 23—the PC’s much-maligned housing legislation that received Third Reading today—councillors are sure to take an even more conservative budget approach than in years past.

But there could be very little wiggle room for Duraiappah to scale back, as he stressed to the board that any reduction in the number of new officers, or investments in new infrastructure, could impact the ability of PRP to effectively police the growing population. He said that the additional 70 officers for 2023 is already a scaled back request. In a perfect world, Duraiappah said the force would need to hire 303 new officers next year to keep up with the day-to-day demands of the region.

“The time is now and upon us to really ensure that we invest in our people as well as in our critical infrastructure,” he said.

The vast majority of the operating budget for the Peel Regional Police is locked into salaries and benefits.

A full list of the investments for 2023 is unavailable as the full 2023 draft budget for the Peel police has yet to be made public on its website.

But for councillors looking to slash that 8.2 percent increase, the new hires are really the only place reductions can be found with the operating budget. The largest chunk of the budget increase—4.1 percent—is required to fund the base budget, 94 percent of which goes to non-negotiable salaries and benefits, meaning neither Duraiappah, nor councillors, can touch it. The remaining 4.1 percent of the increase will go to hiring the new officers and civilian positions.  The current contract for officers sees a first class constable start at $100,420, which represents a 41 percent increase from the $71,400 starting salary in 2006. Duraiappah does not have the power to simply freeze police salaries; a decision that would need to be made by the provincial government. 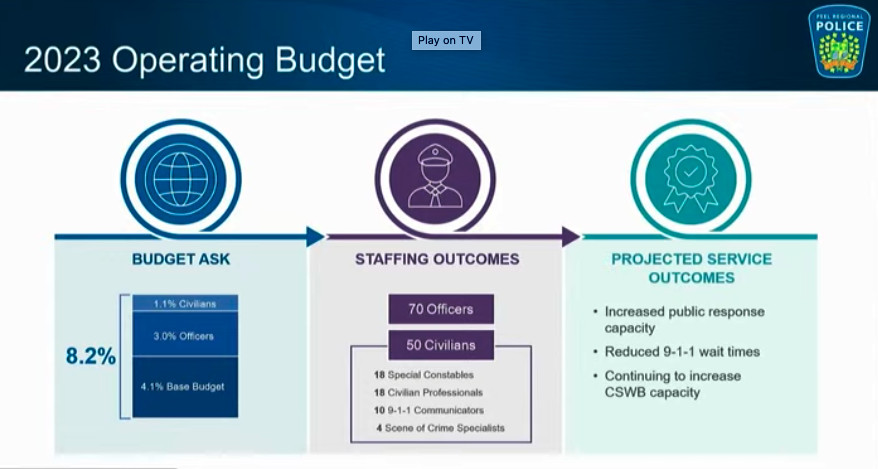 During his budget presentation to the police services board, Chief Nishan Duraiappah said the 8.2 percent budget increase, which would result in 70 new officers hired in 2023, is absolutely necessary to improve critical functions and prevent delays in emergency responses.

The draft budget received unanimous support from members of the Peel Police Services Board who asked no questions of the chief during the public session.

Regional Chair Nando Iannicca, who also sits on the police services board, said “bold action” is required in order to assist the police force with addressing the region’s needs.

“We need this many officers just to stand still,” he said.

Alan Boughton, who also chairs the board’s finance committee, characterized the increased investments as “necessary” and hoped it would be approved “enthusiastically” by all members.

When the budget goes before regional council—the first budget meeting is scheduled for January 19—it is sure to receive heavy scrutiny from members of the public who have been waiting to see significant change to the way PRP operates under the leadership of Chief Duraiappah. The chief promised significant transformation to the organization following years of stagnant leadership from past chiefs that saw years of systemic discrimination and a widening disconnect between a force that is largely white policing a community that is largely non-white.

This dynamic has created many harmful realities, including repeated instances of racial profiling — either in the form of carding, known as random street checks, or the shackling of a 6-year-old Black girl — discrimination, and the inability on the part of police officers to understand the nuances and struggles of the communities they are tasked with serving. This is particularly evident in the police’s treatment of Peel’s Black communities.

Use of force data show Black residents are more than three times as likely to have force used on them during interactions with PRP than any other racial group. Compared to their overall population in Mississauga and Brampton they are far over-represented in statistics that show how often use of force is used against residents by officers.

In 2020, PRP officers used force — which along with using physical force, includes drawing or pointing any type of weapon — in 1,092 incidents. In cases where officers were able to determine the person's race, 35 percent of those individuals were Black, despite Black residents accounting for only nine percent of the population.  In 2021, there was a small decrease in this statistic, with Black residents representing 32 percent of use of force incidents where race was recorded, but it was a sign for many community members that there had been limited action to address the harm being done by officers to Black residents. In October of 2020, the PRP entered into an agreement with the Ontario Human Rights Commission (OHRC) “to examine and address existing and longstanding discriminatory practices within the service.” However, this project has been criticized by members of the public for a lack of transparency and a glacial pace to any progress. A set of recommendations are scheduled to be released in the Spring of 2023, according to the PRP website.

When Duraiappah appears before regional council, he will be tasked with convincing residents that this increase will result in real change for their community, something he has so far failed to do. In 2020, when the PRP fast-tracked implementation of body-worn cameras for officers—something the force marketed as a key step forward in transparency and officer accountability—community members criticized the move as a band-aid solution that would do nothing to address the real issues of systemic discrimination that exist within the organization.

“We urge you to use our tax dollars to invest in care, not cops,” one Peel resident wrote to the board in 2020. “Instead of pumping more tax dollars into ineffective and harmful systems, I’m calling for us to be bold in imagining new ways to support victims,” wrote another.