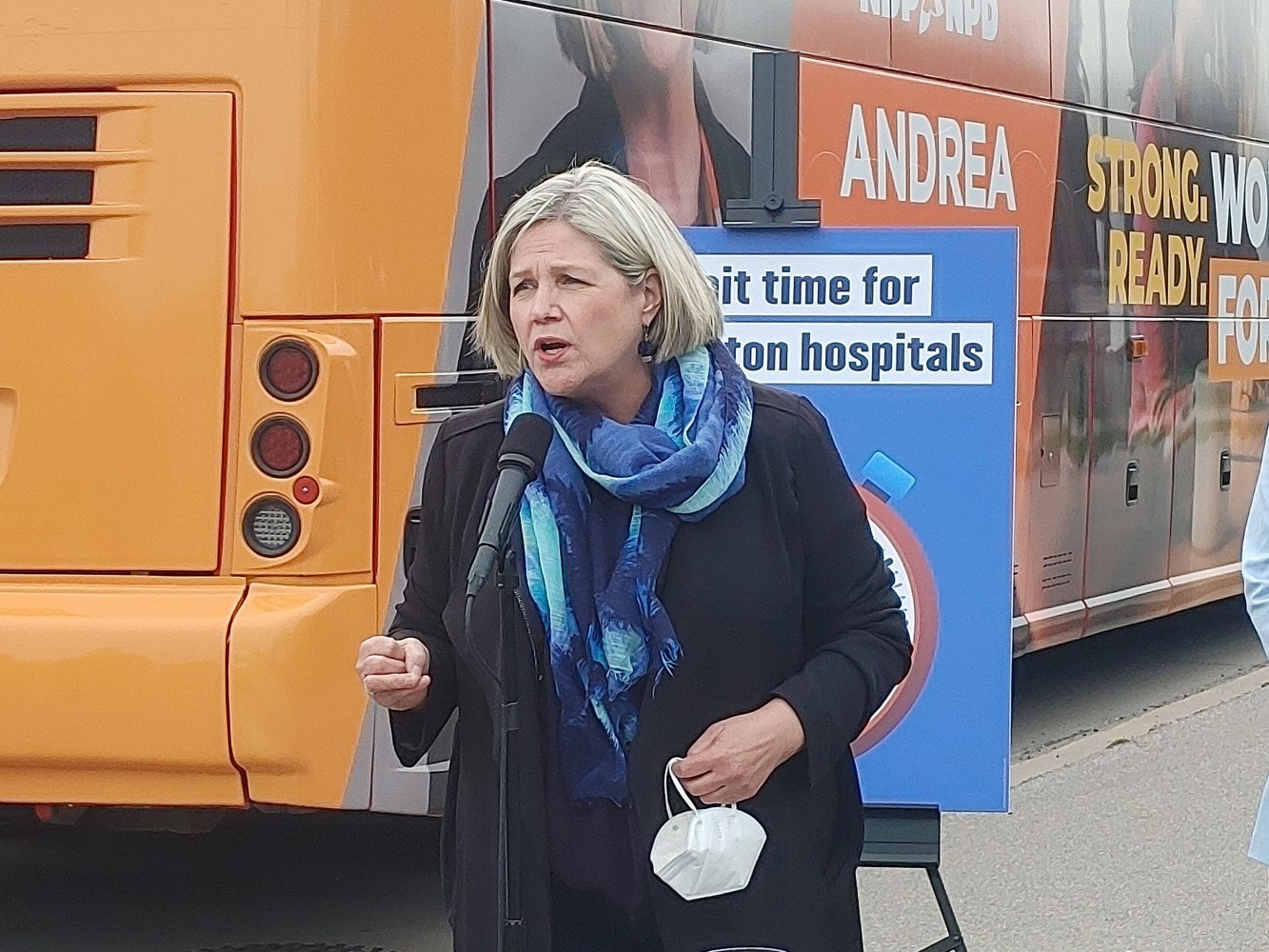 Both the PCs and NDP promise to have the solution to Brampton’s hallway healthcare catastrophe.

Hallway healthcare was made notorious inside Brampton Civic Hospital, the term coined with patients waiting for a hospital bed in an unconventional or unexpected location like a hallway. Civic operates 96 beds per 100,000 residents, less than half the provincial per-capita average of 220 beds per 100,000 people.

In Ontario, healthcare funding is provincial, but with capital projects Queen’s Park demands a local share contribution. Currently, under the PC commitment, the William Osler Health Network and the City of Brampton are both required to contribute $125 million each to expand Peel Memorial to an inpatient facility. The PCs have not provided an official agreement detailing what exactly the expansion will include, but have repeatedly said its plan is to turn Memorial into a hospital with a 24/7 emergency department. It is currently an outpatient facility that has an urgent care department open daily from 8 a.m. to 9 p.m.

The local-share amount the PCs have asked for is at least 25 percent of the estimated cost to build the Phase-2 expansion of Memorial, an increase from the provincial standard of 10 percent of capital costs the local municipality and hospital organization are usually expected to contribute.

At an announcement on May 6, Andrea Horwath, Leader of the Ontario NDP, promised to allocate an unspecified amount of funding to turn Peel Memorial into a full-service hospital with a 24/7 emergency department, build an additional, third hospital in the high-growth community, as well as add a dedicated cancer centre in Brampton.

The budget details are expected to be released with the NDP’s official, fully costed plan expected this week, but Horwath said the local share commitment of the funds required to go forward with a hospital in Brampton would be 10 percent, a major reduction from the 25 percent, $250 million the PC government is asking of the City and William Osler to fund before moving forward with the expansion.

It means Brampton taxpayers and those contributing to Osler’s local fundraising would be responsible for $150 million less if the NDP form government. 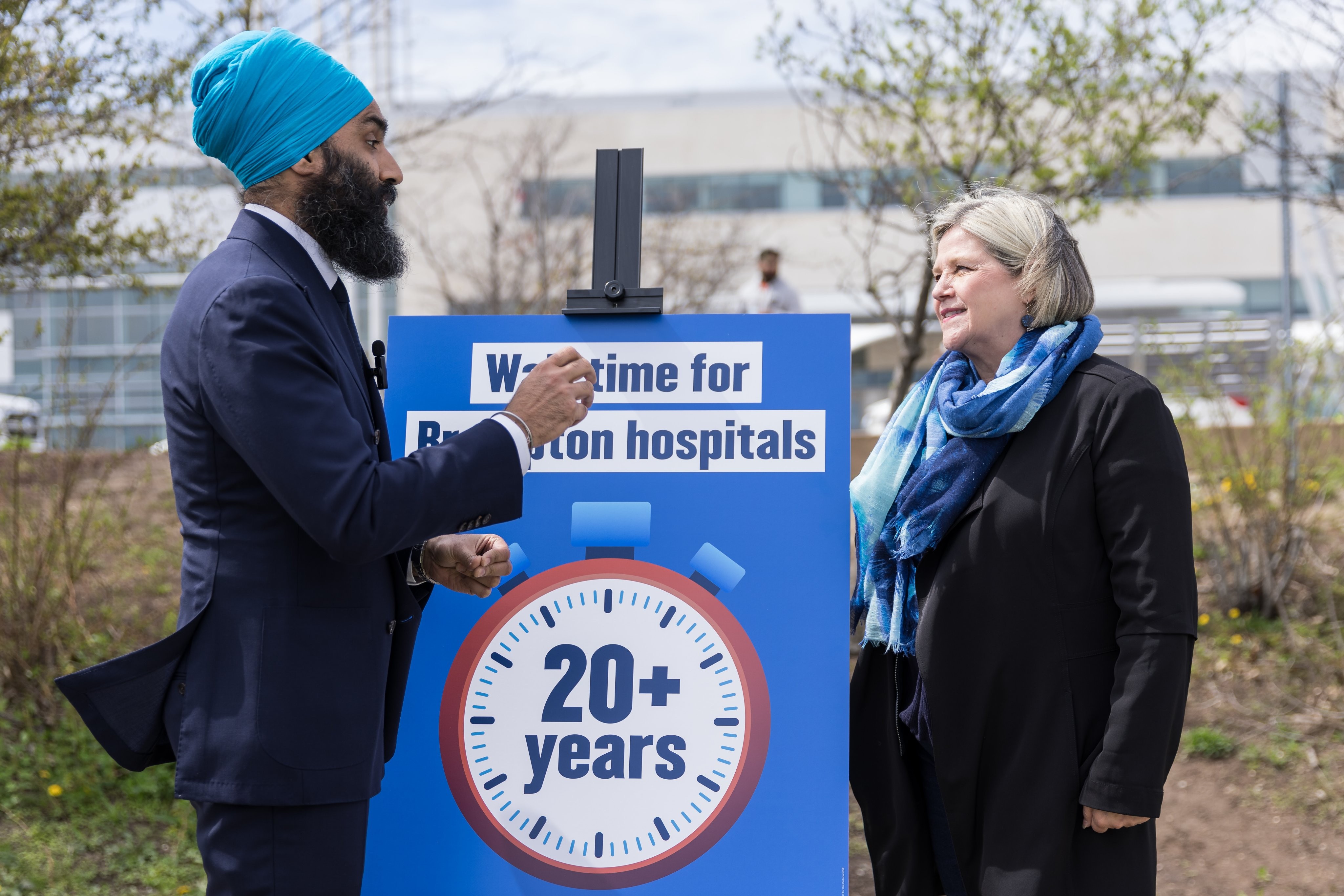 “We know that most communities are at about 10 percent, so we’ve made that commitment. We’re making that commitment to Brampton,” Horwath told a crowd of reporters outside Brampton Civic. “You will be paying exactly what other communities are expected to pay, we won’t rip you off, we won’t treat you differently, we’ll make sure you have the equity of access because you’re not having to pay more than anyone else.”

Horwath called the 25 percent requirement imposed by the PCs “completely wrong” and said under an NDP government the City of Brampton won’t have to pay anything over the provincial average.

“We are saying today, with an NDP government you will be guaranteed to finally have your healthcare needs taken care of. We’re going to fix the healthcare and access to healthcare crisis you have in this community.”

They were similar sentiments to what the Ontario NDP has been platforming for the last year.

In November, 2021, the PCs crushed an NDP motion asking the Ford government to increase its funding commitment for Peel Memorial to ensure 850 hospital beds, an actual full-service emergency department in the facility as well as a third hospital in Brampton.

This would have been a drastic increase from the 250 non-acute care beds promised by the PC government. Currently Peel Memorial has no in-patient beds.

The vote failed 45 to 23, with votes against from MPPs including Brampton PC representatives Prabmeet Sarkaria and Amarjot Sandhu.

In April, Ford’s PCs announced $21 million toward the planning of Memorial’s expansion and a new cancer centre at Brampton Civic; $3 million for the cancer facility and $18 million slated for a grant “to allow the planning” of Memorial’s Phase-2 expansion.

Details on how the PC plan will be fully funded have not been shared and it remains unclear how an emergency department can be created without the types of diagnostic, surgical, ICU and other acute care supports a fully operational ER requires in a hospital that can admit patients who need intensive and acute care after being triaged in the emergency area.

Peel’s hospitals have traditionally been underfunded, receiving one of the lowest per capita levels in the province. In 2013, a review was completed by public sector health representatives, studying three years' worth of funding data, which showed Peel as the lowest of all health units in Ontario with per capita funding of only $29.83, compared to Toronto which received about $45 per capita, and a half-dozen units that received more than $60 per capita.

The underfunding also impacts psychiatric care, with Brampton and Mississauga receiving only about seven percent of the psychiatric resources compared to some other parts of the province.

Raising the money to cover the 25 percent local-share funding demand for Memorial’s expansion has been a challenge for the City of Brampton.

The City had previously secured $62.5 million out of the $125 million required, with the remainder to be funded by property owners through a special levy.

In recent months, Mayor Patrick Brown unsuccessfully opposed a special one percent levy as he campaigns for the federal Conservative leadership on a platform that boasts about freezing taxes in the city during his term as mayor. The levy passed without his support, costing the average property owner $53 annually until it is removed.

Initial estimates suggest Peel Memorial’s expansion will be ready in 2027, after breaking ground in 2023.