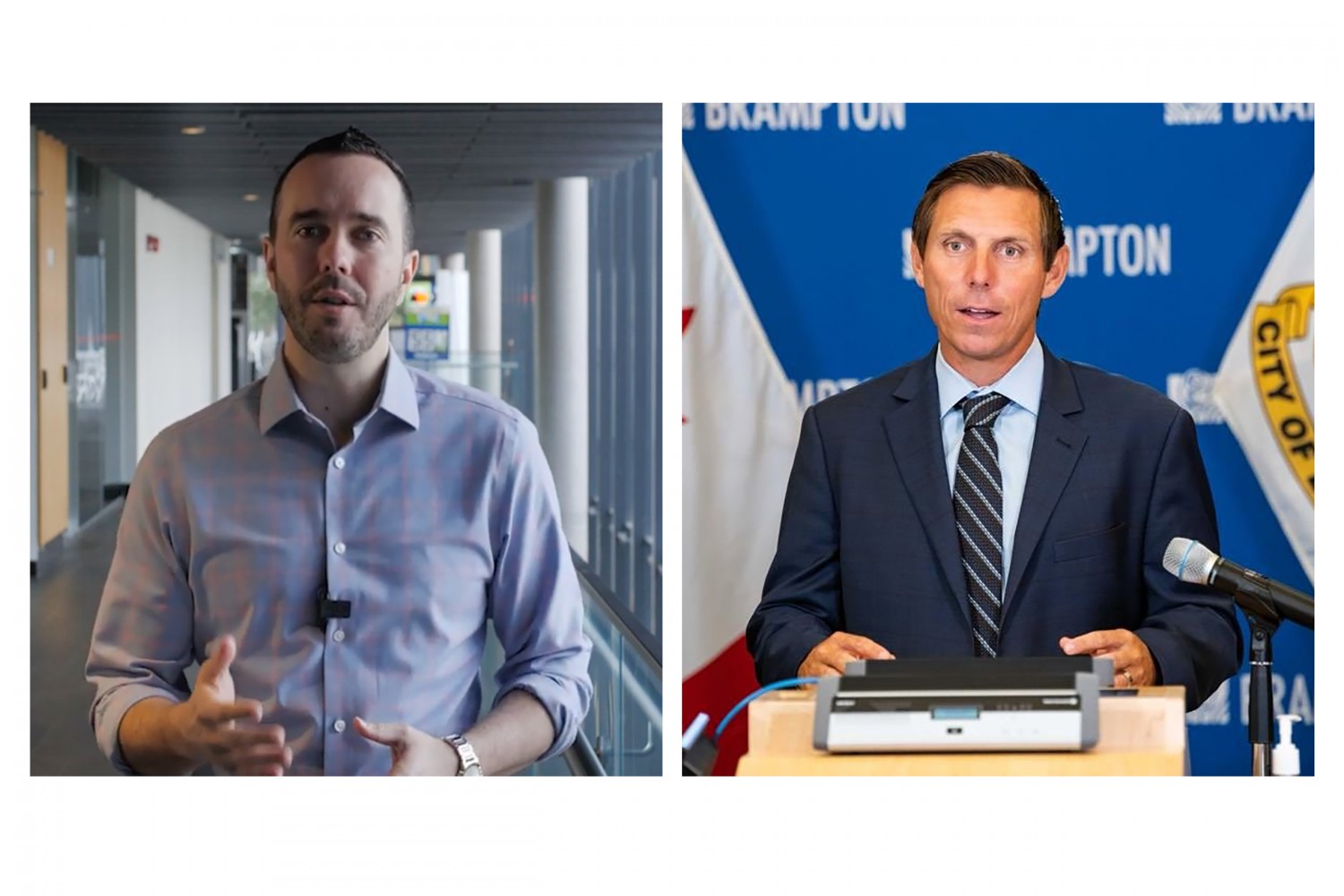 Feature images from City of Brampton

A bloc of six Brampton councillors has made good on its promise—David Barrick is no longer the City’s Chief Administrative Officer.

It’s unclear if the controversial former CAO stepped down on his own Friday; an announcement was released by the City four hours after a special council meeting was held in the morning, called by the six-member group who vowed in a blistering statement Wednesday that bold action would be taken to restore democracy and trust in local government.

Following a public power struggle between Mayor Patrick Brown, who orchestrated Barrick’s hiring following a series of scandals he was implicated in while working in Niagara Region, council unanimously voted to replace him with Paul Morrison, temporarily, until a hiring process is completed for a permanent CAO.

Barrick’s employment with the City of Brampton was ended immediately.

“Our Council thanks and acknowledges David Barrick as he moves on to new opportunities, for his contributions to our organization and community,” a statement from the City of Brampton reads.

It is unclear if Barrick will receive any severance payments funded by Brampton taxpayers. He earned $322,000 in salary and taxable benefits in 2020, according to the Ontario public sector salary disclosure list.

Morrison seems like an ideal candidate to restore confidence and trust in City Hall, after three years of chaos since Brown was elected mayor in late 2018. Brampton’s director of enforcement and bylaw services is used to protecting the rules that govern the city, and seems like the perfect person for the job, after Barrick ran roughshod over the policies and procedures that are supposed to protect taxpayers from abuse.

Brown stood behind the disgraced former CAO who had a checkered past in Niagara where citizens were outraged over his conduct there, as a regional councillor and a top bureaucrat at the local conservation authority.

But it became clear this week that a majority of councillors were outraged by Brown’s irresponsible conduct, as he allegedly subverted voting rules to prevent the other members from taking action to clean up City Hall.

“Paul has held leadership roles at the City as Director of Bylaw & Enforcement and Acting Legislative Services Commissioner, and was a former Superintendent with the Hamilton Police Service. Paul has been a steady hand in leading the Bylaw team during this challenging period of COVID-19,” Friday’s statement said. 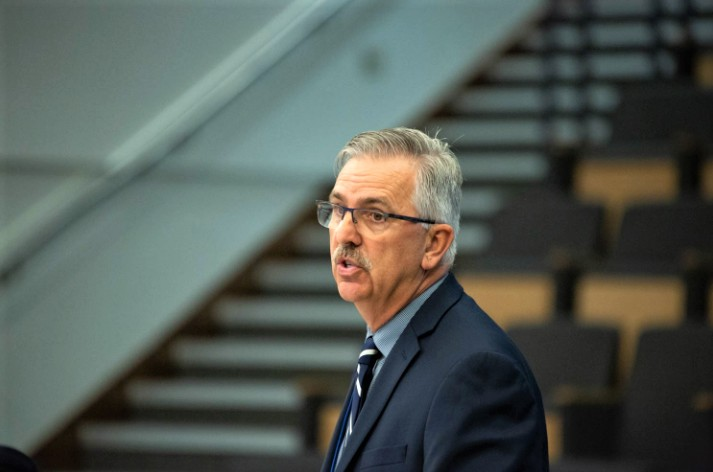 Barrick’s departure is the first step in a push by Charmaine Williams, Jeff Bowman, Gurpreet Dhillon, Pat Fortini, Martin Medeiros and Doug Whillans, the six members who released the stunning statement Wednesday, which said democracy in Brampton was “under siege”.

The six councillors, who have aligned to vote against Brown and his allies on council, allege that the will of the majority has been ignored in previous meetings. They said, in the scathing statement released Wednesday, that senior staff (led by Barrick) and some councillors (led by Brown) are taking “a blowtorch to the rules that are supposed to govern our city”.

The replacement of the former CAO could be the first big step to extinguish the flames they say have ravaged City Hall.

“I can’t speak to the decision that we made in camera, but certainly I think today is a reflection of us wanting to move forward as a municipality and to ensure that we restore confidence by our residents into City Hall,” Medeiros told The Pointer.

It was Brown who orchestrated Barrick’s hiring and helped place him at the top of the City’s administration. The two men are linked through conservative circles.

Brown presented a motion in August 2019 that gave his office the power to choose the recruitment firm that would hire the CAO, with the mayor chairing the hiring committee. The firm originally considered to find the next CAO was dropped and replaced with another without explanation. 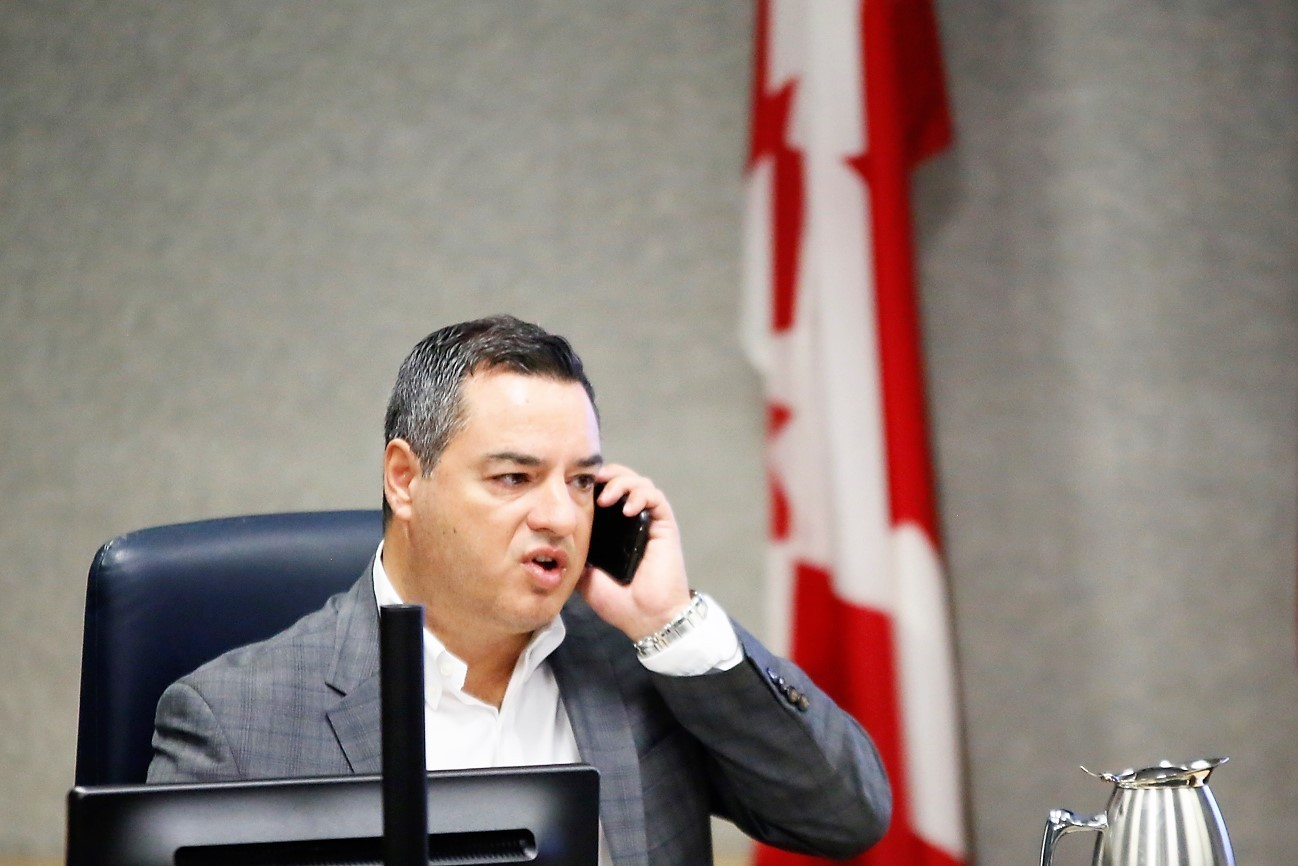 The new firm, Feldman Daxon Partners Inc., carbon copied Brown’s chief of staff into emails regarding the CAO’s recruitment. Interviews for the role of CAO took place at the Hilton Garden Inn in Brampton on October 17 and 18, 2019. According to documents obtained by The Pointer, the interview process concluded at 5 p.m. on Friday, October 18; on the same day the City announced Barrick’s hiring.

The firm hand-picked by Brown failed to inform the hiring committee, comprised of council members, about any of Barrick’s past conduct, and recommended him despite having zero experience.

It has been made clear in public meetings this week that Brown had been frustrating the democratic process in an attempt to protect his man. In a lengthy and tense special council meeting Tuesday evening, councillors asked what they could do if Brown, as chair, would not listen to a majority of councillors telling him his decisions to block motions were wrong.

During the discussion, Brown jumped in to defend his actions while running meetings, making it clear the accusations were being levelled at him. “I try my best as chair to administer our procedural bylaw,” he said.

It is also clear that at least part of the issue around how meetings are conducted is related to Barrick. A motion to amend the procedure bylaw brought forward Friday explicitly tackles how to deal with discussions around the CAO.

“Where the confidential matter relates to the Chief Administrative Officer, City Council shall determine which staff members may be present during a closed session,” a suggested amendment reads.

Councillors alleged Brown blocked them from bringing votes forward to address the ongoing problems at City Hall. He did not respond to questions from The Pointer earlier in the week. 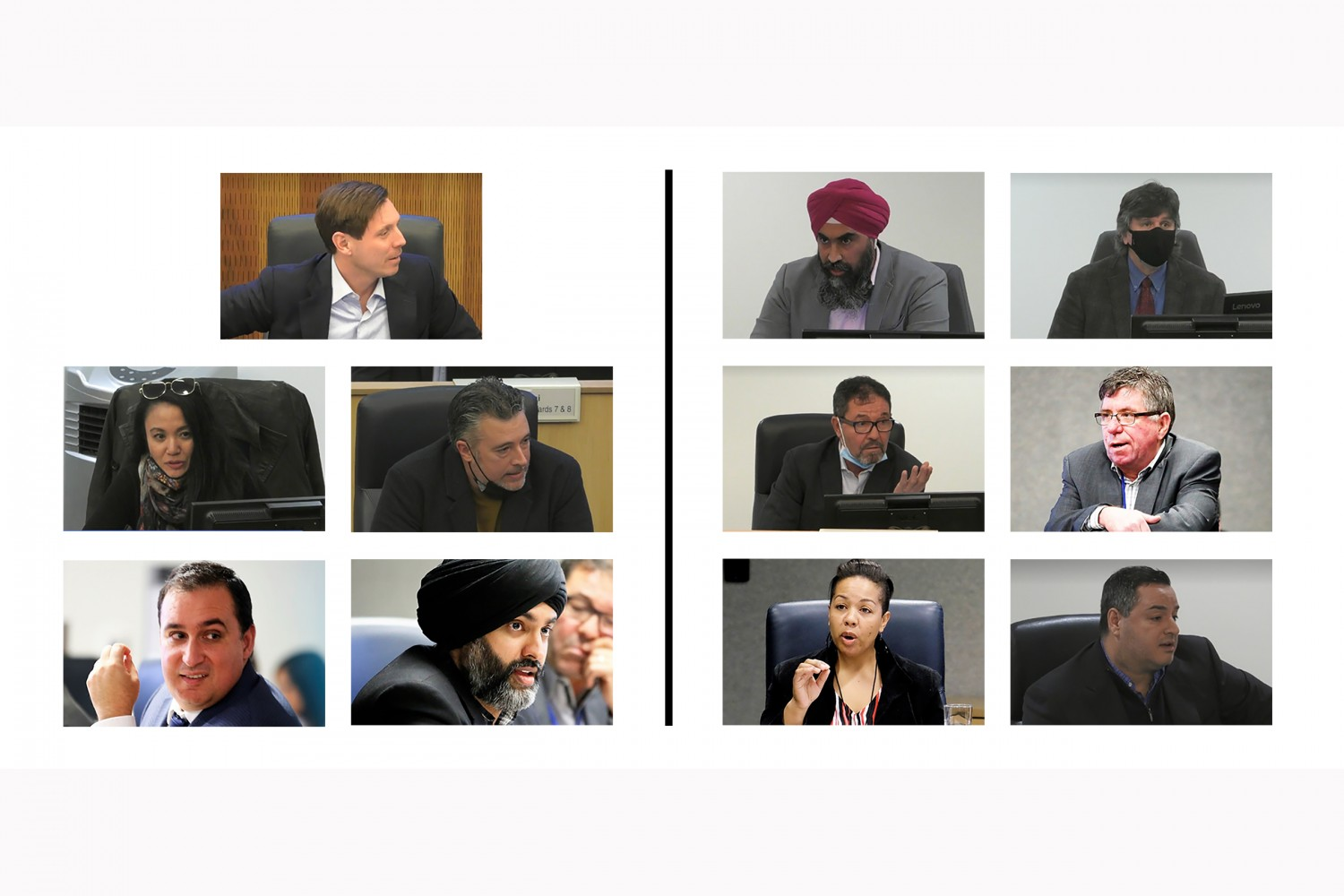 There has been a clear split on Brampton City Council.

Barrick's departure from his job at the top of Brampton’s municipal bureaucracy marks his second abrupt departure during a short, controversial municipal career.

He was implicated in a shocking 2019 investigation by the Ontario Ombudsman and the “Inside Job” report that was produced. It probed allegations of corrupt behaviour and delinquent hiring in a Niagara Region CAO search. The investigation revealed Barrick pressured a senior staffer to support his boss at the conservation agency during the Region’s hiring process, and promised the employee that he would have influence with the new CAO if he supported the scheme.

Jason Tamming, a senior communications staffer at the Region during the hiring, behaved corruptly when he gave the preferred candidate the questions and answers for the interview process in advance.

Tamming is currently the head of communications in Brampton City Hall, after both he and Barrick were recruited from Niagara by Brown (who is directly linked to both through Conservative political circles) following their firing from positions they held there.

“The Regional Municipality of Niagara’s 2016 CAO hiring process was an inside job, tainted by the improper disclosure of confidential information to a candidate – a candidate who was ultimately successful and became the region’s most senior administrator,” Ombudsman Paul Dubé wrote in his 2019 investigation report.

It’s unclear if Tamming will continue to hold the position in Brampton, now that Barrick is gone, and with Brown suddenly unable to control council, as he has for most of his term in office.

Tamming is the head of strategic communications, culture and events, for a city he has little familiarity with. Barrick also had never lived or worked in Brampton before.

As media reports detailed the anger in Port Colborne, which Barrick represented on Niagara Council, over his behaviour, including widespread mismanagement of the conservation authority which he briefly took over after his boss there got the Niagara CAO job, Barrick did not seek re-election in 2018. After news broke of the hiring scandal and following a series of controversies at the conservation authority, he was fired by its board.

Then, in a bizarre twist, he was briefly rehired before walking away in 2019. A damning report by the Ontario Auditor General Bonnie Lysyk, concluded that his original hiring at the agency was not handled properly.

Over the past two years, Barrick has padded the bureaucracy that runs City Hall with allies and associates. Under Brown, Brampton hired three men tainted by the Niagara scandal: Barrick, Tamming and Robert D’Amboise, who works under Barrick.

An investigation by Deloitte into allegations of irresponsible hiring, improper procurement and bullying that centred around Barrick also revealed the former CAO was propelling unqualified staff into key positions. Investigators laid out, in detail, how Barrick subverted the hiring process for two directors in charge of key infrastructure files to allow his preferred candidates to take the jobs. Candidates were supposed to be engineers, should have had seven to ten years of management experience and five years working in project management and construction. The two men Barrick put in the position, changing the rules to suit his agenda as he went about it, did not even have engineering degrees.

“Deloitte did not identify any indications of construction experience on either candidate’s CV," the investigation report stated. Investigators said there was little they could do, as Barrick had changed the rules on the fly, even replacing policies to justify his alarming actions, when the allegations were levelled against him.

Over more than two years, Barrick enjoyed a position as the most powerful employee working for the City of Brampton. Reversing his most alarming actions and getting to the bottom of what was done behind the scenes over the last few years will likely keep councillors and Morrison, their new CAO, busy for months.

“I expect changes to be made if they have to be made,” Medeiros said. “I will leave that to the determination of the CAO, I have my thoughts... and I certainly continue to do my job to look at some of those things that were touched upon in the [Deloitte] investigation.”

The Pointer will be doing more reporting on the actions being taken to restore trust inside City Hall.