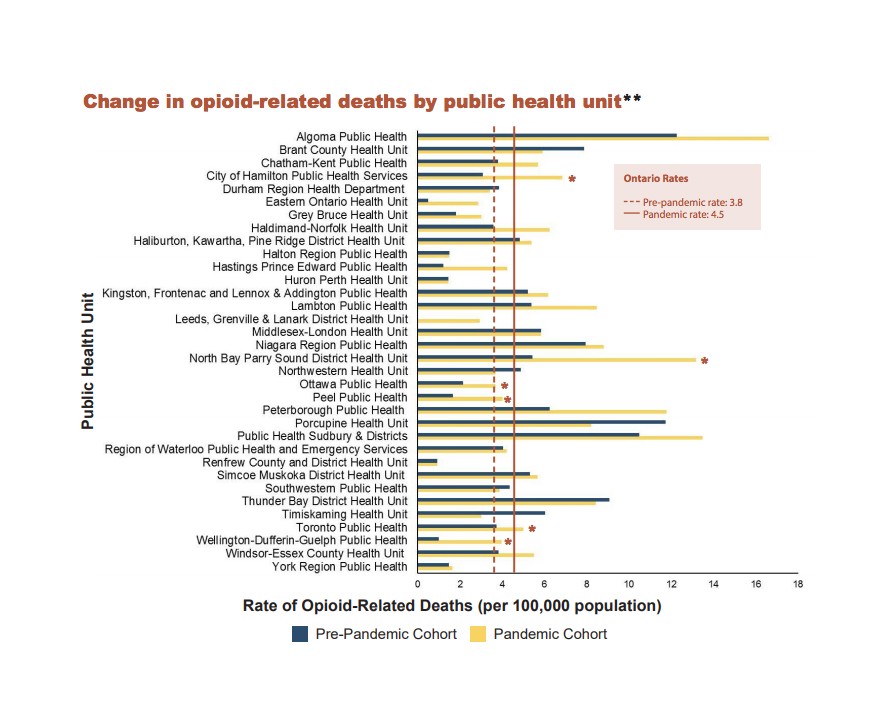 Opioid overdoses killed more Peel residents in 2020 than ever before

Nearly two years ago, Peel’s associate medical officer of health made a prophecy.

Dr. Kate Bingham spoke with The Pointer in June 2019 about the disturbing rise in opioid-related deaths and hospitalizations occurring in Peel.

At that time, data showed more people were dying and more were being admitted to hospital as a result of opioid use, a byproduct of an opioid crisis that has been unfolding on city streets across the country for the better part of two decades. Between 2005 and 2017, overdose deaths jumped 252 percent from 23 to 81. Hospital visits related to suspected overdoses spiked 520 percent compared to 2003.

Dr. Bingham didn’t think the concerning rise in deaths was over.

“It’s probably going to get worse before it gets better,” she said.

Nobody could have known how tragically accurate that prediction would turn out to be. 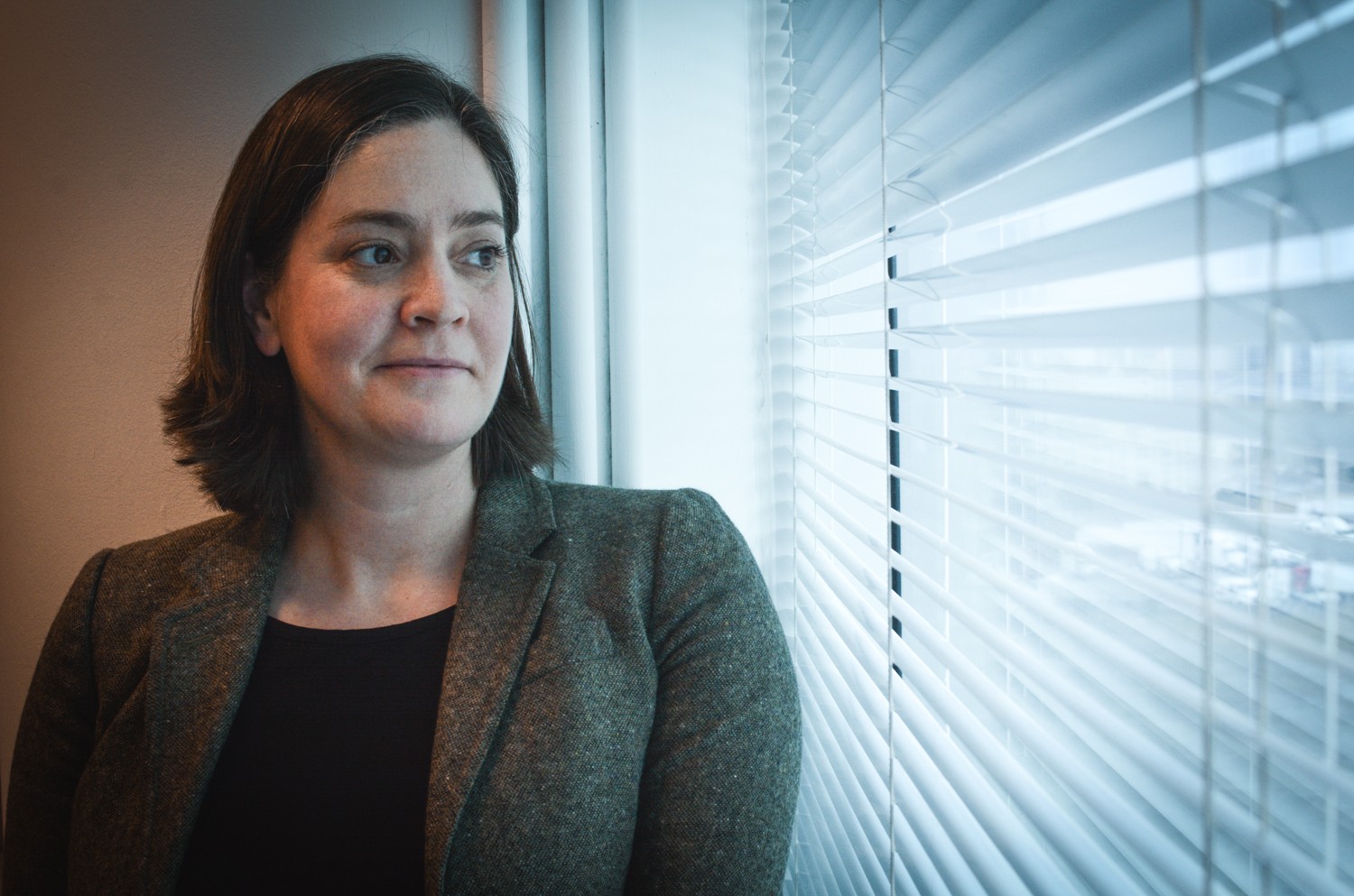 Then the pandemic struck.

Despite pouring more efforts into life-saving harm reduction measures to help Peel’s drug using population, the region saw more opioid overdoses in 2020 than any previous year on record.  To make matters worse, the death toll for all of last year has yet to be finalized, but deadly overdoses in the first 10 months of the year were enough to surpass all of 2019 with 121 people dying between January and October 2020. 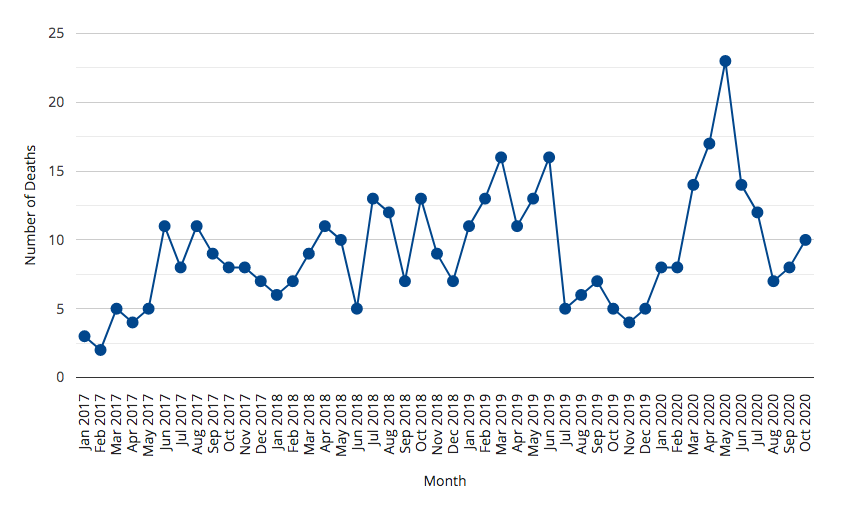 Opioid overdoses spiked in May, three months into the pandemic, killing 23 people, the region’s deadliest month on record.

Tragically, Peel is not alone in this trend, which is being seen on city streets and in local hospitals across the province. But, a November 2020 report from Public Health Ontario (PHO) found Peel has experienced one of the highest spikes in opioid-related deaths of any public health unit over the last year with the region’s overdose rate per 100,000 residents nearly doubling.

“The geographic analysis of opioid-related deaths across Ontario shows that, while there has been a rising trend of opioid-related deaths across most regions of Ontario during the pandemic, some areas – particularly larger urban centres like Hamilton, Toronto, Ottawa and Peel regions – are exhibiting the largest increases in rates and absolute number of cases,” the report states. “Therefore, while local governments across the province should consider how to provide adequate services and supports to people who use drugs during the COVID-19 pandemic, this need is most urgent in larger urban centres across the province.” 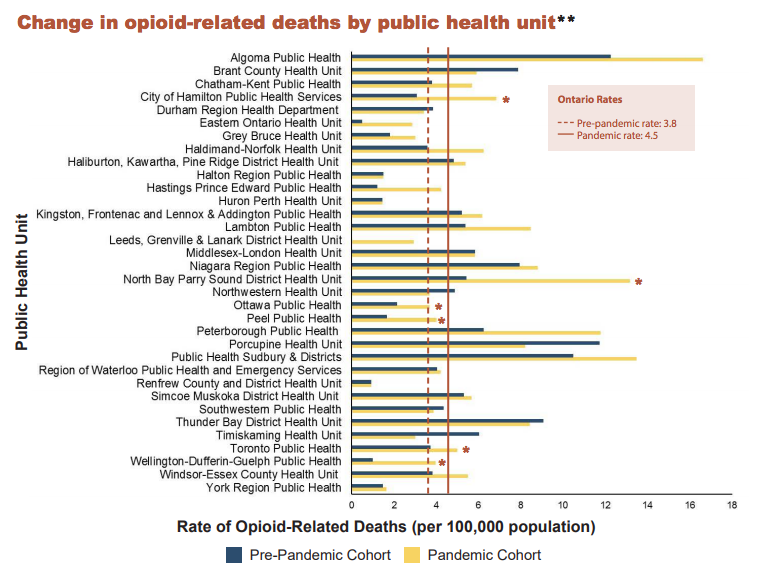 When comparing overdose data over a three month period before and during the pandemic, Peel’s overdose rate per 100,000 nearly doubled.

COVID-19 forced people apart, stressed people out, and turned the unregulated “street” drug supply into an increasingly deadly game of Russian roulette, as black market supply chains became disrupted, and drugs became laced with deadlier substances in an effort to boost the high.

Between March and May 2020, 54 Peel residents died by overdose, a 35 percent increase over the same time period the year before. Across Ontario, the province experienced a 38 percent increase in deaths linked to opioids in the first 15 weeks of the pandemic. Over that time, 695 people died, or 46 per week. PHO also found that opioid-related deaths increased disproportionately in low income areas and diverse neighbourhoods.

“The findings of this report broadly suggest a need for policies and programs designed to urgently address the increase in opioid mortality, such as to provide access to harm reduction services, a range of low-barrier opioid agonist treatment options, a safer supply of drugs, other health and social supports, and integration of these services into hotels used to house people during the pandemic,” the PHO report reads.  “These recommendations align with those made by national organizations and reflect the need to act quickly to provide adequate support for people who use drugs during current and anticipated future waves of this pandemic.” 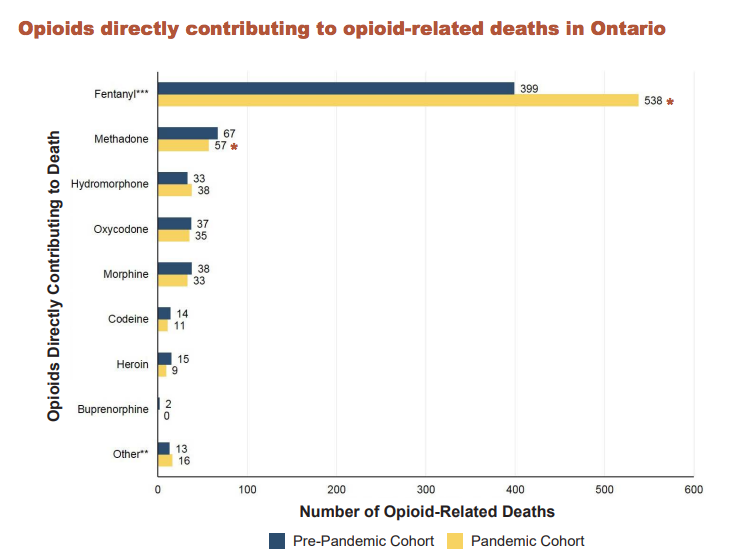 During the pandemic, fentanyl has continued to be a major cause of overdose deaths.

While the PHO stresses the need for urgent action, the public health units that make up their membership are struggling to keep their heads above water. In Peel, a COVID-19 hotspot for much of the pandemic, key efforts as part of its Opioid Strategy — a broad directive that aims to mitigate the impacts of the ongoing crisis as well as address upstream problems — have been on hold for months.

As The Pointer previously reported, 80 percent of public health staff were redeployed to fight COVID-19, meaning “many public health programs and strategic initiatives are paused,” Peel Public Health told The Pointer. That remains the case today as the vaccination rollout, combined with the continued need to contact trace new cases of the novel coronavirus, keeps PPH occupied.

In November, Dr. Lawrence Loh Peel’s medical officer of health told regional council that his staff was at a tipping point. They were burnt out, run down, and without assistance, life-saving work would soon fall by the wayside.

“All options to utilize existing resources to sustain our COVID-19 response have been exhausted, and so are my staff,”  Dr. Loh told councillors on November 12. Council agreed to the hiring of 32 additional temporary positions to aid with the workload. The positions will cost the Region $3.54 million between 2020 and 2022, and will be covered fully, or in part, by provincial funding.

Keeping key initiatives running, like the Region’s harm reduction program, are key to providing life-saving assistance to people who use drugs, especially because these programs are being accessed now more than ever.

“In response to needs identified by community agencies, the Harm Reduction program’s staffing was adjusted to provide harm reduction supports/proactive outreach through the mobile vans during the day at key locations and agencies within the Peel community, including shelters and food banks,” a regional spokesperson stated. “Client interactions in 2020 increased by 52 percent (total: 4,639) compared to 2019 (total: 3,057). This increase was likely largely due to targeted harm reduction supports provided at these locations.”

This is all being done while Peel is one of the lowest funded regions not only for mental health and addictions, but public health — funding for the latter is currently frozen at 2018 levels. This means that while more people move into Peel and require services, Peel’s public health unit is forced to provide services to more people with the same budget.

The Central West Local Health Integration Network (LHIN), which includes Brampton, and the Mississauga Halton LHIN, received $66 and $53 respectively per capita from the provincial government for mental health and addictions support, well below the provincial average of $107 per capita. Much of this funding is targeted to specific agencies, which helps the individual agency and its programming, but can create siloed efforts in the community that are not interconnected, making it difficult for those in need to access them. Further, Peel’s branch of the Canadian Mental Health Association (Peel-Dufferin) is one of the lowest funded in the province, receiving about a third of what other agencies receive per capita.

While a sense of optimism has seeped into the general population with the arrival of warm spring air and more COVID-19 vaccines, 2021 has provided no signs that the horrors unleashed by the opioid crisis in Peel last year are over.

At the start of this month, the Peel Regional Police issued a warning to residents about a tainted drug supply in the region. Between March 5 and 7, officers responded to 6 overdoses — two of them deadly — believed to be linked to illicit drug use.

“Illicit drugs have been revealed by Health Canada to contain combinations of narcotics, including Heroin, Cocaine, Carfentanil and Fentanyl.  These combination drugs are manufactured illegally and in ways that cause inconsistency in potency. This process makes the combination drugs unpredictable and increasingly life-threatening for users,” a release from PRP states. “Peel Regional Police want to make the community aware of the unpredictable nature of combination drugs, and when purchasing illicit drugs, there is this additional risk factor.”

More on the Opioid Crisis in Peel:

Beating opioids: a look inside Peel’s plan to turn the tide on the overdose crisis 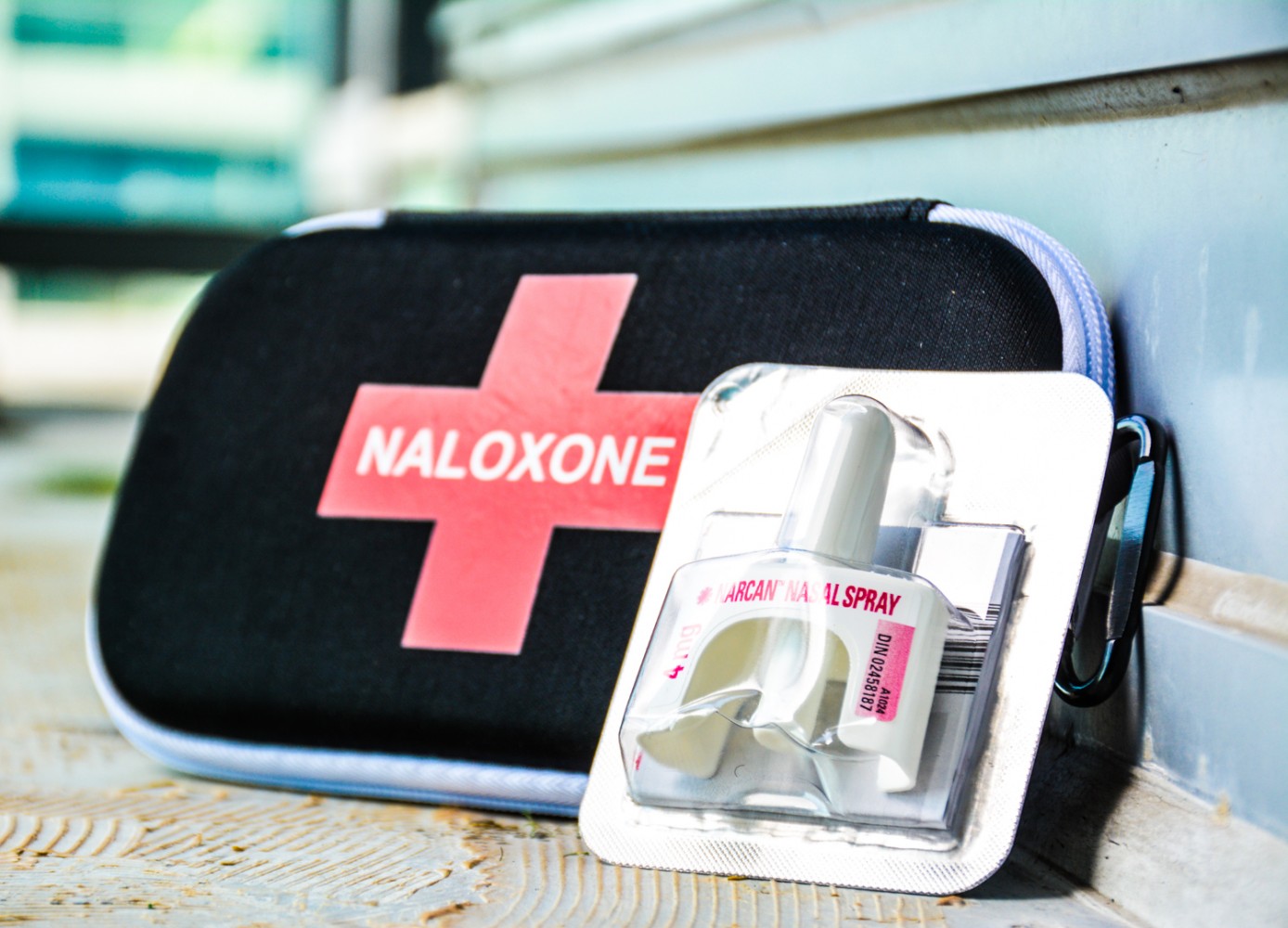