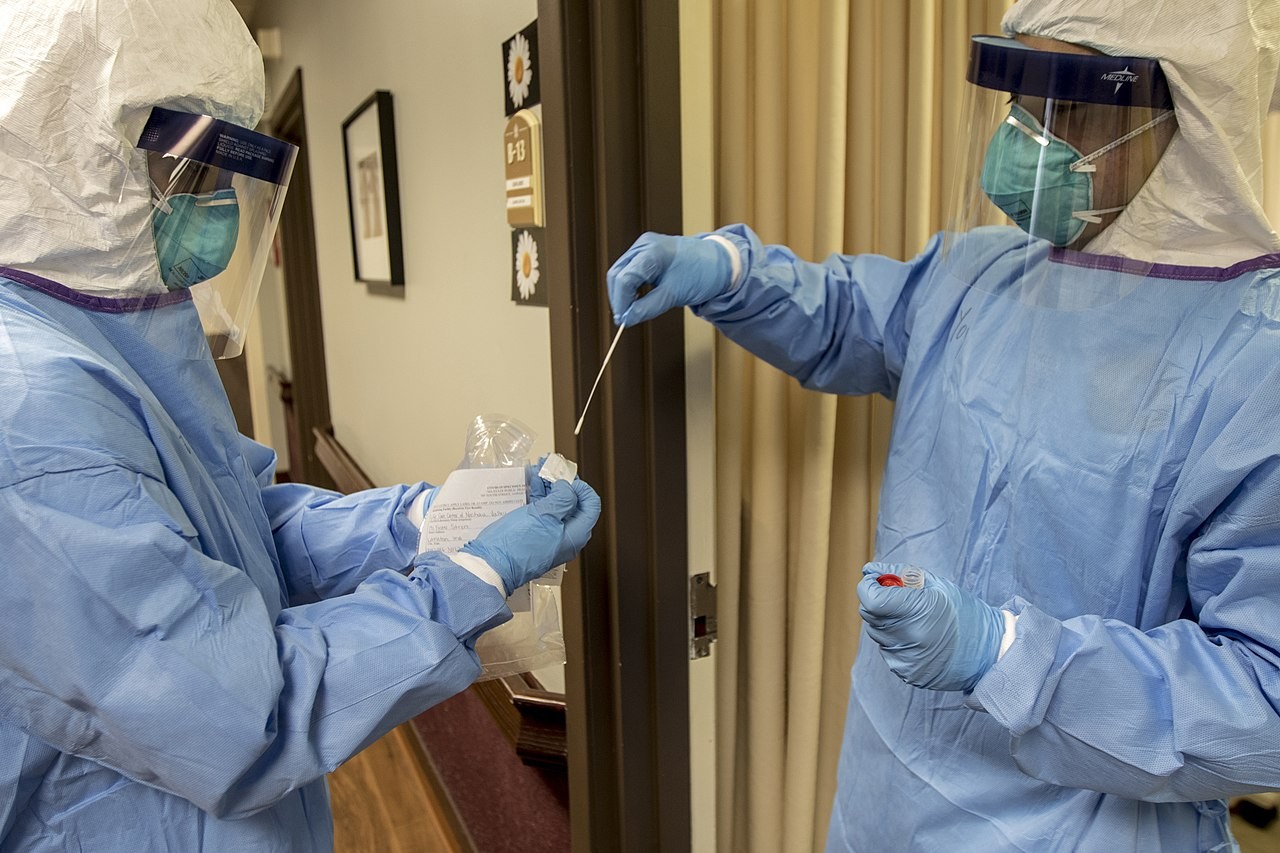 ‘To go to work every day to see your residents dying is a horrible way to work’: care homes need help before next wave

Personal support workers in Ontario’s long-term care sector have been screaming for help for years. When the COVID-19 pandemic struck, it exacerbated a staffing crisis that was putting unbearable mental strain on employees forced to work overtime on understaffed shifts to care for residents with increasingly complex needs.

“This is a sector that is in a crisis,” Jennifer Cloutier, a personal support worker, told reporters Monday at a press conference held by CUPE Ontario, SEIU Healthcare, and Unifor. The three organizations collectively represent more than 70,000 employees within the long-term care sector. “It was terrifying, [it] was exhausting, [it] was emotional,” she said tearfully. “To go to work every day to see your residents dying is a horrible way to work.” Cloutier said at times, as few as three staff members worked in a 24-hour period. “How do you keep a resident alive with three to four staff when I've worked a 20-hour shift and haven't even hydrated or nutritioned myself?” she questioned.

Since March, long-term care homes have been repeatedly forced to deal with outbreaks of COVID-19 within their walls. Four LTC homes in Peel Region declared outbreaks in March that lasted between two and three months. Within those four homes alone, 294 residents tested positive. Only 190 of those cases recovered; 100 positive staff cases were also confirmed within the four facilities, with one staff member passing away. The first four outbreaks started a disturbing pattern which saw 15 outbreaks occurring in April before tapering off into a consistent stream of random infections. 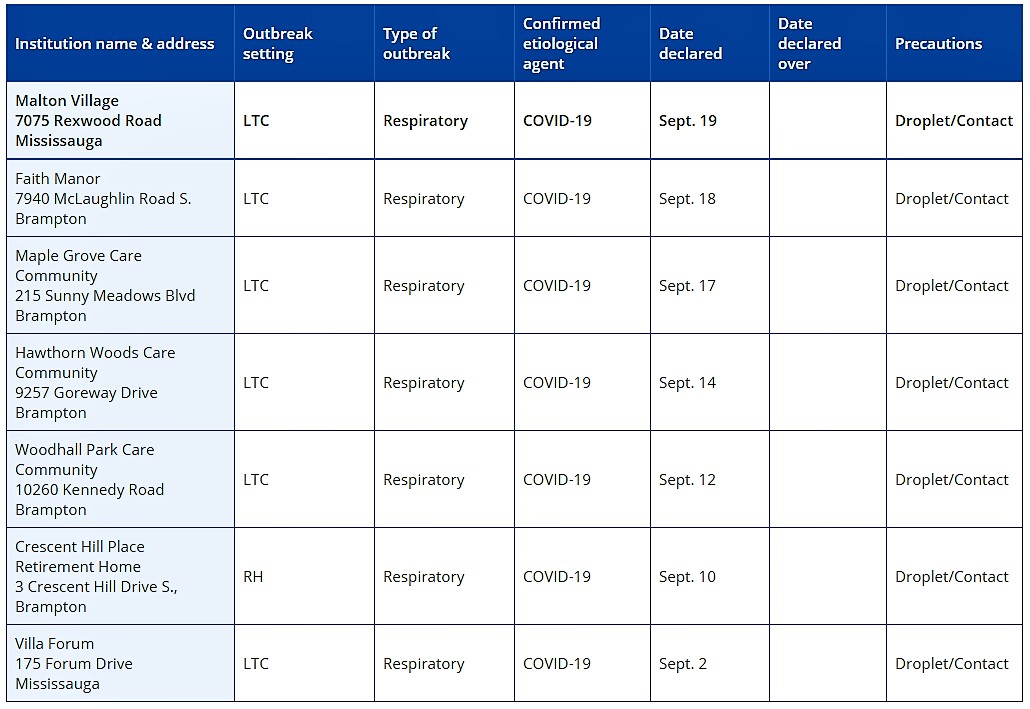 Current outbreaks in long-term care and retirement homes in Peel

Since March, 635 residents have become infected with COVID-19, nearly 200 of them have died. Two staff have passed away while 298 have been infected with the virus.

There are currently six active outbreaks occurring in LTC and retirement homes in Peel Region.

The new outbreaks come as advocates and politicians continue to voice their concerns on how the inevitable second wave will impact LTC homes. On Monday, the Globe and Mail revealed the Ford government didn’t publicly acknowledge recommendations from infectious disease experts to “build prevention and control measures inside the province’s long-term care facilities.” The measures would allow the homes to follow similar COVID-19 protocols as hospitals.

According to the Globe, proposals by the group of health experts representing different hospitals asked for the hiring of “infection-control staff” in LTC homes to be trained by doctors, with one specialist being available for every 200 beds in nursing homes, and one specialist for every 250 beds in retirement homes. The proposal was originally shared with the government back in June.

No concrete efforts have been made by the province and the Ministry of Long-term Care to fill the gaps that were exposed during the first wave. This isn’t the first time the province had been made aware of staffing concerns in long-term care, which was an ongoing problem before the novel coronavirus hit the homes.

The PC government came under fire for funding cuts that reduced the inspection protocol, prior to the pandemic, which is meant to ensure issues like staffing are being addressed at facilities that care for the elderly.

The Ontario Health Coalition (OHC) shared a report in February that outlined the lack of PSWs to attend to the needs of the approximate 80,000 residents living in LTC homes in Ontario. The report showed some homes can be short anywhere from 5 to 10 PSWs within a 24-hour period on the lower end. On the higher end, some homes had a shortage of 25-50 PSWs in one day. This left other staff members to make up the difference, with many pulling double shifts and, ultimately, suffering burnout. An earlier OHC report released in December of last year studied all long-term care and retirement homes in Ontario and found staff shortages were happening in nearly every one of them. A survey of PSWs completed in July by the OHC and released publicly found 63 percent of respondents reported things had only gotten worse since the start of the pandemic.

Another report detailing concerns on LTC homes was released in July, essentially repeating the same points OHC shared earlier in the year. Written by Eileen Gillese, commissioner of the long-term care homes public inquiry, the report outlined a number of recommendations for the province, including improving the “workload and working conditions” to keep staff on the job.

The lack of staffing played a role in seven facilities receiving emergency support from the Canadian Armed Forces, including Brampton’s Grace Manor. In a whistleblower report released by the military in May, numerous alarming realities were highlighted at the facility, including staff moving between units with positive and negative COVID-19 patients without changing their personal protective equipment.

After spending a further month in the facility, the military released an exit report. It stated things were better, but deficiencies still existed, specifically pertaining to the “education” of external staff to ensure they followed the policies of long-term care facilities.

Members of the Canadian Armed Forces detailed a number of problems in Ontario's long-term care homes after stepping in to assist them in battling COVID-19.

While other provinces are moving forward to prepare vulnerable long-term care homes for a second wave of COVID-19, Ontario's PC government has yet to address any of the recommendations or concerns that continue to swirl around staffing at LTC homes.

“You cannot pretend that care levels will increase, without a comprehensive staffing strategy and funding commitment,” Candace Rennick, Secretary-Treasurer of CUPE Ontario said at the joint press conference Monday.

When The Pointer asked Peel Public Health how it plans on dealing with a second-wave in LTC facilities, staff said measures put in place in wave one will continue to be implemented. “This includes infection prevention and control, and outbreak prevention measures such as screening and admissions,” staff said.

Elliott said Monday plans for the second wave will be brought forward Tuesday “for discussion and to let people know what we have been planning for some months now.” It’s not clear if such details have already been shared with local health units. 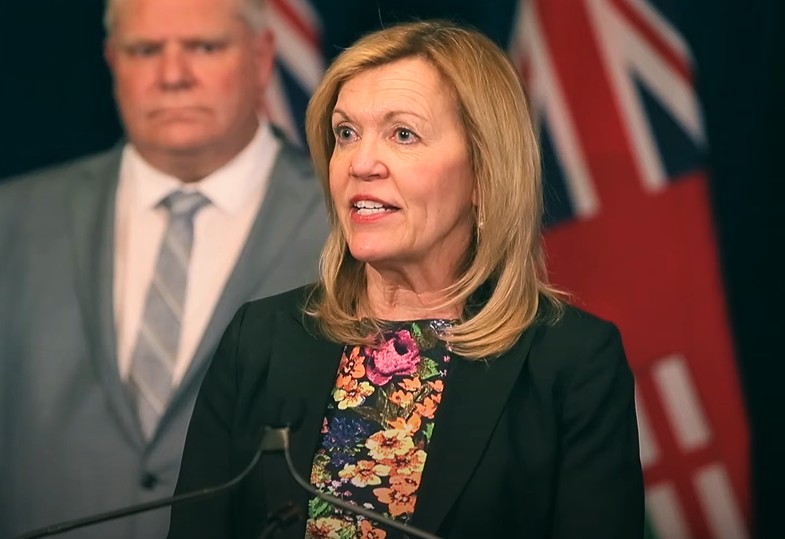 Health Minister Christine Elliott has not offered any concrete assurances that assistance for long-term care homes will form part of the province's plan to handle the second wave of COVID-19.

“No one wants to relive the nightmare that thousands of Ontario families with loved ones in long-term care endured this past spring,” NPD Opposition Leader Andrea Horwath said in a press release, urging Premier Ford to act on the recommendations the experts made.

The dire situation in these homes has resulted in a number of people taking legal action. The latest is a $25 million class-action lawsuit against Camilla Care in Mississauga, where at least 68 residents died because of the spread of the novel coronavirus, according to a press release detailing the lawsuit.

“It is alleged that following Ontario’s declaration of a State of Emergency on March 17, 2020, Camilla Care failed to implement screening measures of its staff and basic social distancing practices, including the separation of infected and non-infected residents. It is alleged that during this period, there was severe under-staffing at Camilla Care and a failure to provide basic personal protective equipment ('PPE') to Camilla Care’s staff," the press release states.

The facility has been under the care of Trillium Health Partners since May 27, with the organization reporting a number of concerning observations, including residents who tested positive sharing a room with someone who tested negative, and PPE being “locked away” and inaccessible to staff at times.

Class-action lawsuits have also been filed against a number of other companies that operate LTC facilities in Brampton and Mississauga.