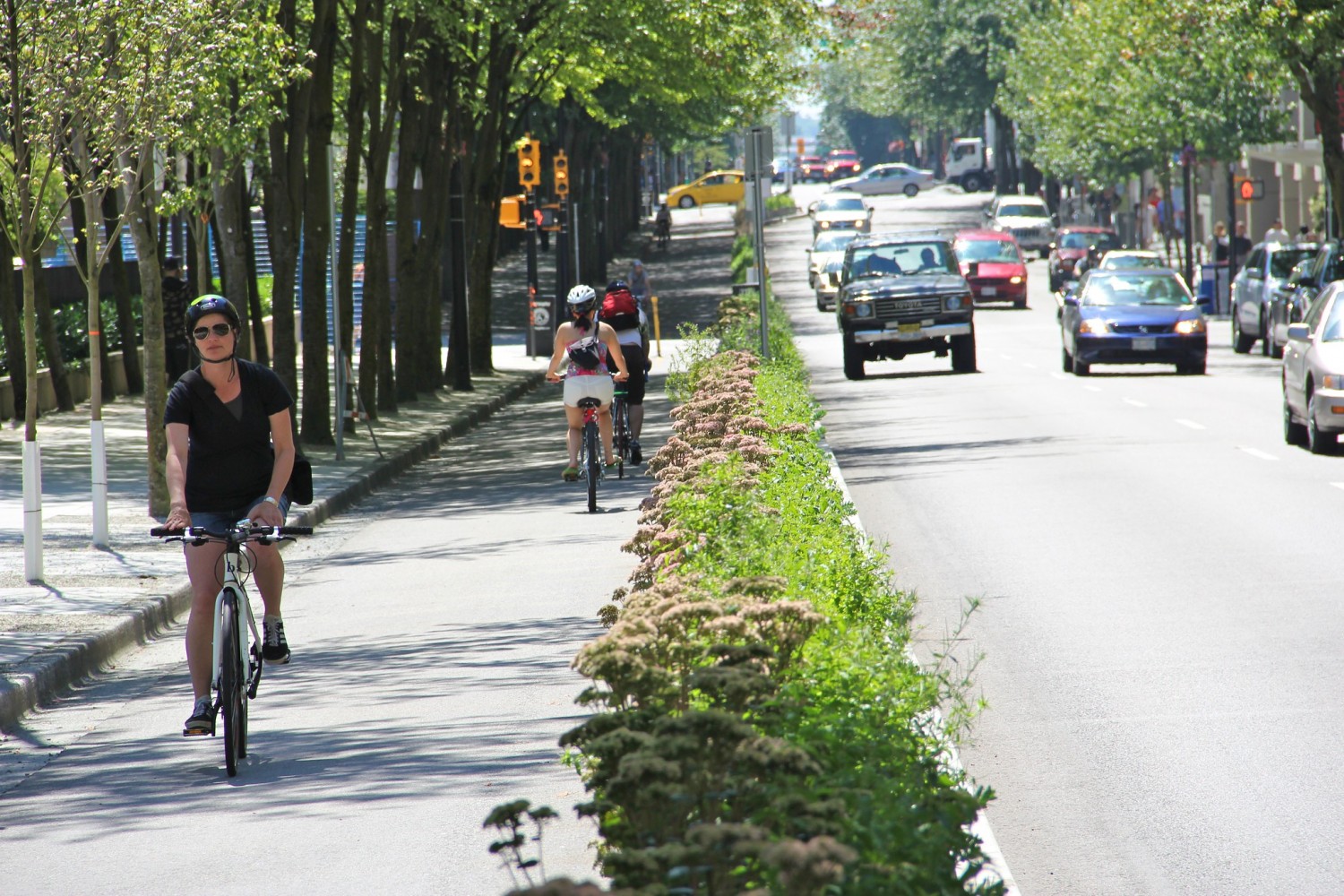 Mississauga investing in cycling as part of its COVID-19 recovery, despite dire financial projections

Mississauga is significantly bolstering its bicycle lanes and pedestrian friendly infrastructure as part of its recovery from the COVID-19 pandemic. Last week, councillors pledged to pour $1.3 million into the new plans aimed at making it easier to commute to work by bike.

By the end of 2020, the City plans to add nearly 18 kilometres of separated and painted bike lanes. The total represents a 30 percent increase in cycle tracks across Mississauga and a small step towards a more comprehensive active transportation network.

Staff also suggested closing some streets to through traffic and shutting busy routes like Lakeshore Road on weekends.

Matthew Sweet, Manager of Active Transportation, told councillors the new plans represent a move towards a commuter bike network and away from cycling as a leisure activity. He said the new tracks would connect those in areas suited to cycling, particularly where residents may rely on the bus.

“We looked at factors such as population density, personal vehicle ownership, workplace destinations and potential increased risk of COVID-19,” Sweet said. “So we wanted to zero in on areas that had a higher proportion of households with one car [or] fewer, and also workplace commute distances under 10 kilometers in length. Areas of the city with a higher rate of shorter commute distances, with a high potential for conversion to cycling as a potential mode of transportation.” 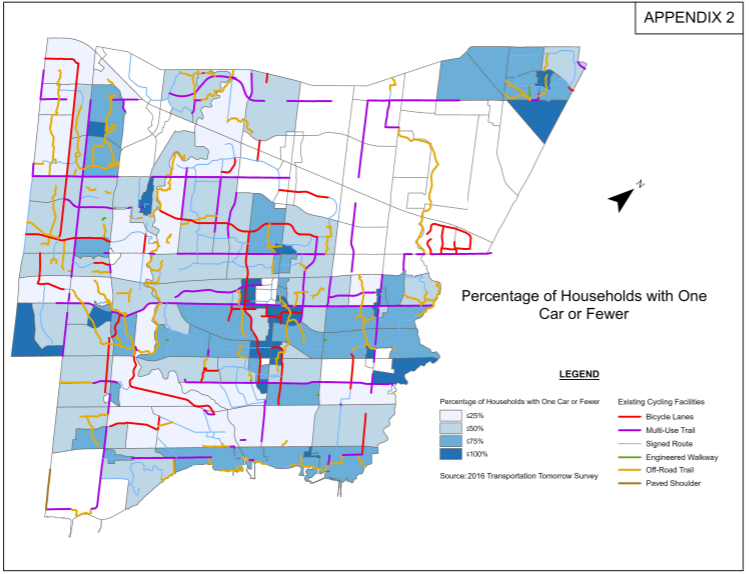 When identifying areas for potential new cycling infrastructure, the City of Mississauga looked for parts of the city with a high number of homes with only one vehicle, a strategy to try and incentivize those most likely to convert to cycling.

The creation of more bike lanes is an aspirational move by the City, hoping better infrastructure will attract more riders. The 2016 census found less than 1 percent of the population commuted to work by bike, a fact perpetuated by poor active transportation infrastructure. In increasing its cycling facilities by almost a third, the gauntlet is being thrown down to residents to leave the car at home.

The COVID-19 pandemic has gutted the coffers at City Hall and turned thousands of lives upside down. The silver lining for car-oriented Mississauga could be accommodating new bikers and pedestrians.

Councillors recently took part in their first budget meeting of the year, where they were presented with a grim reality. A projection for the City’s operating budget across the next four years showed that to simply maintain existing services, the city was looking at a potential increase of 9.2 percent in 2021, 7.1 percent in 2022, 2.8 percent in 2023 and 5.1 percent in 2024, that’s before factoring in any new long-term capital projects.

The decision to invest in bike lanes ties into council's Vision Zero strategy and plays a part in a longer-term project to expand sidewalks and increase space for active transportation. If the bike lanes are a success and convince more to cycle to work, it could also go some way to allowing the City to achieve its climate goals.

Almost 70 percent of the new bike lanes will be protected, meaning some kind of physical barrier will shield cyclists from passing traffic. In total, 12.5 kilometres of the 17.9 being created will offer bikers significant protection, with the remaining 5.4 kilometres representing painted bike lanes. 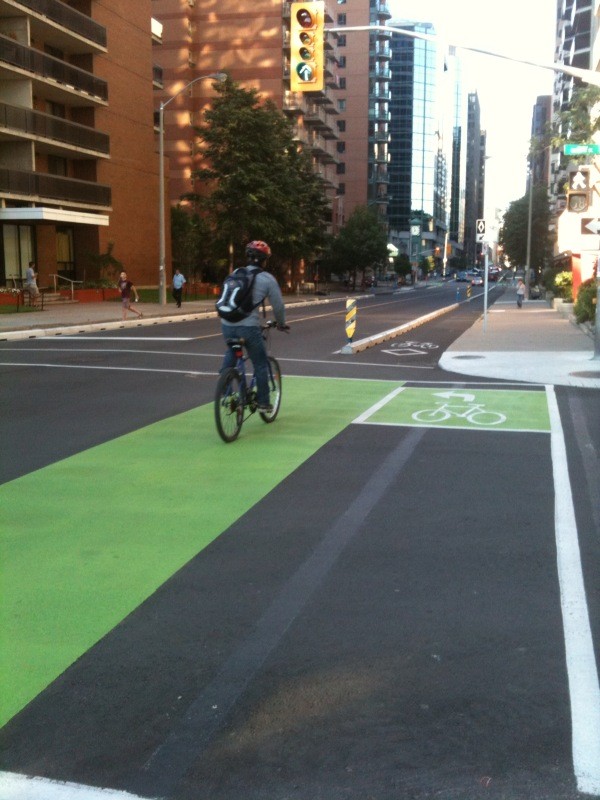 The majority of the new bike lanes planned for Mississauga will be protected, meaning they will have some form of physical barrier between cyclists and automobiles.

The difference between painted lines and physical barriers is vast. Mississauga’s roads have recently come under scrutiny for illegal street racing, while even those observing limits can still go as fast as 80 kilometres per hour in some places. Bollards or concrete between cycle lanes and main traffic act as a safety net for riders; paint leaves room for human error. 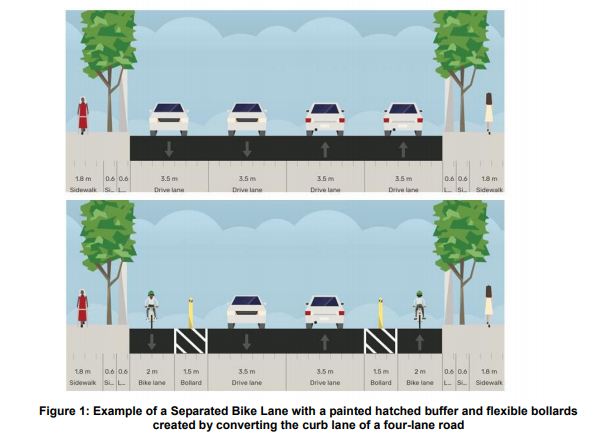 New bike lanes will also play a part in Mississauga’s plans for a bike and scooter hire scheme. At the end of 2019, staff were tasked with investigating how micro mobility rentals would work and what changes would be needed to local roads and bylaws. Additional safe space for residents to cycle would be a step in the right direction, meaning one day residents may be able to hire a bike from the City and ride it to work in a fully protected space.

Phil Green, founding member of the Mississauga Cycling Advisory Committee, previously complained to The Pointer of the City’s inability to deliver decent biking infrastructure. He described bike lanes being built and then destroyed, signs appearing in the middle of tracks and a general trend of inaction that demonstrated how low these projects were on the council priority list.

Alongside the new bicycle lanes, the City will work towards introducing a network of “quiet streets” and some tactical road closures. The Quiet Streets program is borrowed from neighbouring Toronto, where some local streets have been closed to through traffic and residents are encouraged to use road space for walking, cycling, skateboarding and other activities.

“Certain areas of the City continue to see crowding of pedestrians, particularly on weekends, such as Port Credit and other areas along Lake Ontario,” staff wrote. “Weekend road closures can provide additional space to facilitate physical distancing.”

The estimated cost of implementing the entire Active Transportation COVID-19 Recovery Framework is set to be $1.3 million. No new funding is being put towards the projects identified in the framework. Instead, the City will take funds from the Gas Tax Reserve and Development Charges Reserve.

The new infrastructure will have a small impact on winter maintenance budgets, with more space for workers to clear. 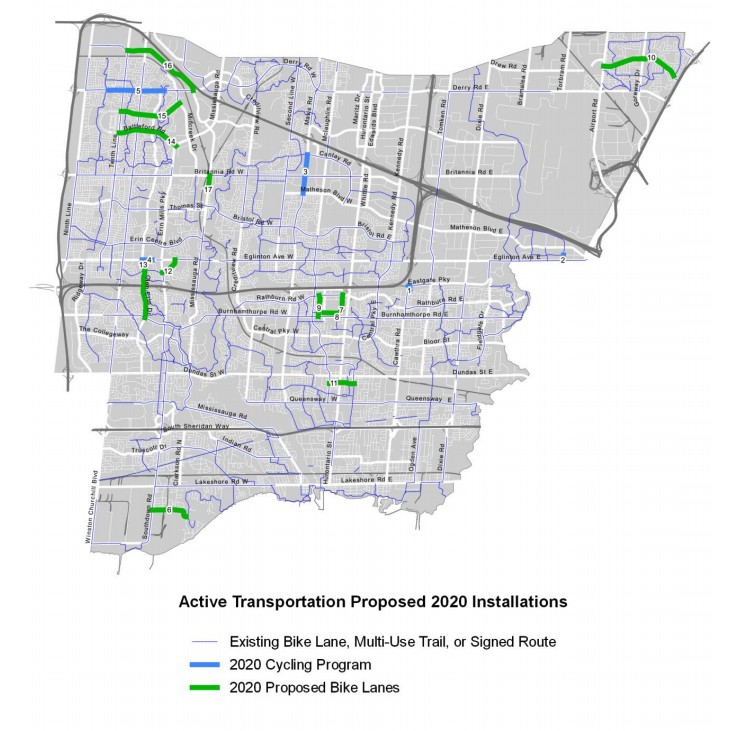 Mississauga’s new plans for active transportation infrastructure build on several interim bike lanes (made with construction cones) introduced between April and June of this year. Sweet said those lanes offered an instant solution to meet the community’s needs for space, but the time has come for permanent plans.

“Those were really our immediate response to needs within the community for safe spaces to go outside and have recreational exercise opportunities while maintaining physical distancing,” Sweet told councillors on Wednesday. “This report and framework really represents us moving into a new phase of this work, focused on transportation and mobility, rather than recreation and leisure.”

For the new bicycle lanes to work effectively, connection is key. Cyclists should be able to safely switch between trails, separated bike lanes and their destination, without having to merge into general traffic.

“It doesn’t actually go into the main part of the business park,” Saito complained of the proposed route. “You’re dumping cyclists onto what is an extremely busy street with no lanes … and they are generally truck routes because there is a lot of warehousing there.”

The Meadowvale example may be a specific case study for Ward 9, but the principle of well-connected routes is applicable across the city.

A spokesperson for the City of Mississauga confirmed the plan was not completely finalized and last minute tweaks could still be made.

“The detailed design of each location will determine exactly what the bike lanes will look like. The locations themselves are also subject to change,” they said.