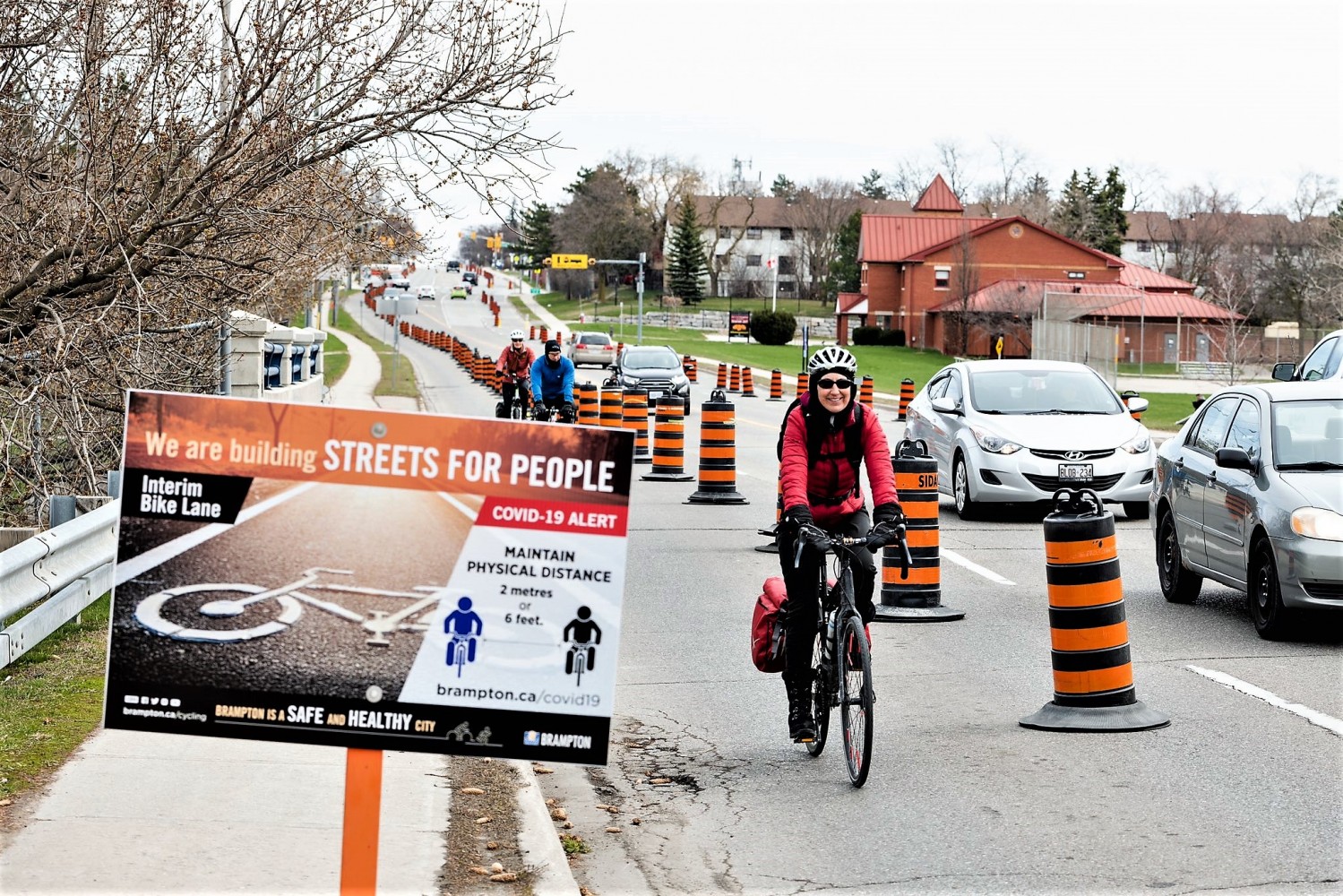 Will temporary bike lanes in Mississauga and Brampton outlive the pandemic?

In every situation, it is natural to look for the positives, but the COVID-19 pandemic can make that challenging. Some people have taken pleasure in finding extra time to read, others are learning to cook. Scores are getting into running, while a few are saving money on transit or fuel.

The cities of Brampton and Mississauga are at the early stages of plans that could see their residents benefit in the long term.

Last week, Brampton officially announced a plan it had been hinting at for some time, turning a small portion of its massive car-clogged road system into bicycle lanes. In normal times, this city built for the automobile is a dangerous and intimidating environment to cycle in, suited to professionals and not amateurs.

Regional roads in the city have speed limits as high as 80 km/h, while Brampton’s grid structure and arrow straight roads, many of which come directly off surrounding highways, encourage drivers to hit speeds that are significantly higher.

Now, with road traffic in the Region of Peel reduced by more than 30 percent as a result of widespread closures, the City is taking the first baby steps toward putting cyclists first. 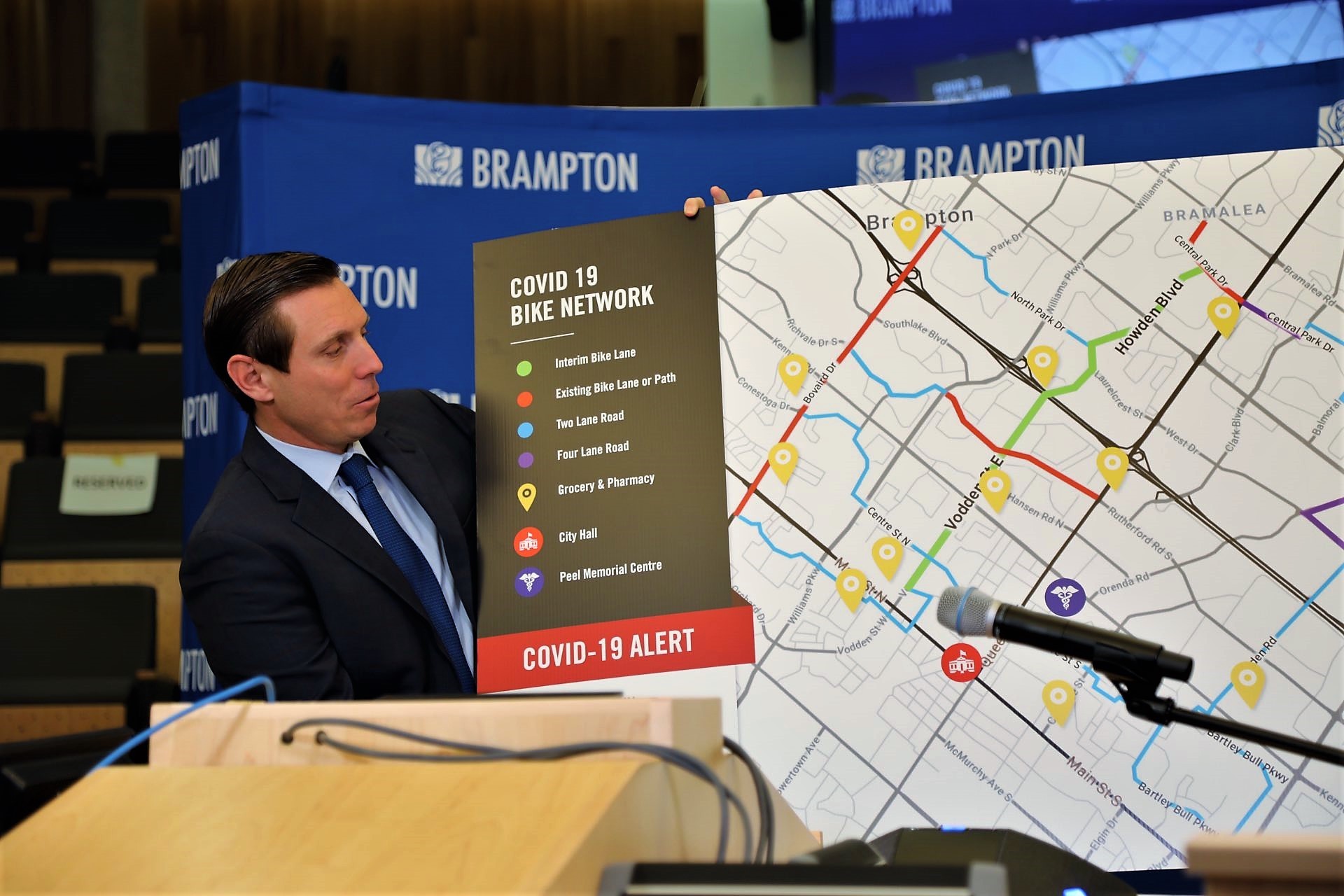 Interim bike lanes, marked out with construction cones, have been set up on Vodden Street to offer alternatives for cyclists navigating the city. As well as protecting riders from the threat of vehicles, the routes allow cyclists and pedestrians to practice improved physical distancing, providing more space without having to step into the road.

Brampton Mayor Patrick Brown issued a media release on the plan, encouraging residents to be “active and healthy” while the enhanced Vodden Street cycling and pedestrian route is rolled out, which will help maintain safety and physical distancing.

The interim bike route is part of Brampton’s plans to improve the city’s active transportation network and make cycling, walking and running easier for residents. Data from the 2016 census shows they have a long way to go.

According to the national survey, 0.26 percent of Bramptonians commute to work by bike, while 1.6 percent of the population walks.

Anyone who spends any time in the city can tell you it is dominated by the car, but the current council has made inroads toward active transportation.

The problem is, current council members have also supported its sprawling, car-dominated past, sending out mixed messages.

While members support the cycling initiative they have voiced zero opposition to the biggest issue standing in the way of a greener, more active future: The GTA West Highway.

Despite the ample research showing it’s a disastrous environmental plan, one killed by the previous Liberal government which cited research that showed it is the worst of transportation planning that is stuck in the past, Brown has publicly supported it, and along with the rest of council, voted in favour of a motion that was behind the Ontario PC government’s push to reignite studies to get the highway back on track.

Environmental groups across the province have said it will put protected greenspace in jeopardy while creating even more carbon emissions in an already over-polluted, gridlocked region.

It will also lead to more sprawling subdivisions developers are advocating to build, with wide roads to service them that force residents into their cars.

Introducing more, separated bike lanes would go some distance to solving that problem. The temporary structures on Vodden Street represent a good starting point, but permanent structures and ambitious changes to busier thoroughfares such as Kennedy Road, Queen Street or Main Street will be key to making cycling viable for the city’s population of bike sceptics. 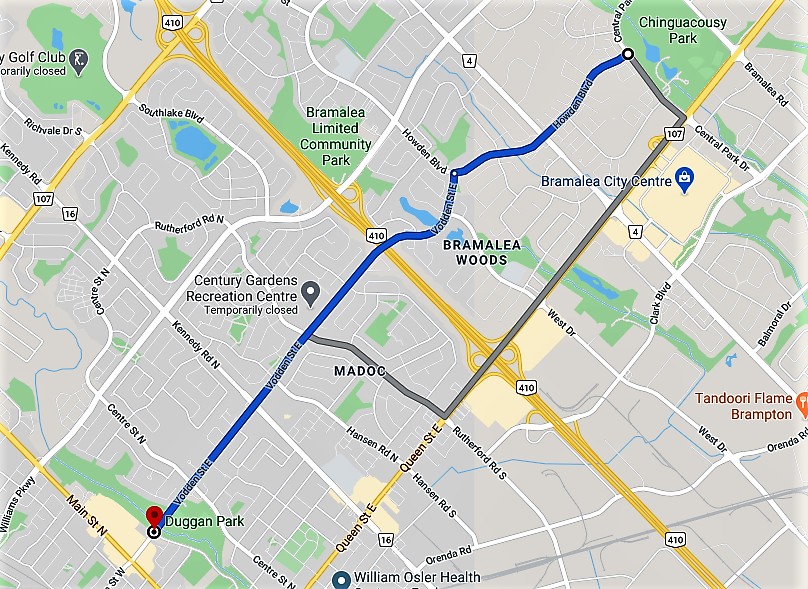 Google Maps indicates it would take 17 minutes to travel the Vodden bike lane, on average

Regional Councillor Rowena Santos, a vocal advocate for active transportation in the city, explained the plans for bike lanes on Vodden were already in place; COVID-19 has simply provided the opportunity to implement them.

“All of this stuff was already approved in terms of route, it was COVID-19 that just forced us to create more temporary dedicated lanes because of physical distancing protocols,” Santos told The Pointer. “That’s something that we talked about … what pieces of the Big Ask [Active Transportation Master Plan] can we actually expedite now? So, when COVID-19 is over, we don’t disrupt car traffic and congestion because of the construction of those bike lanes.”

Mississauga has been working on the same plan as Brampton. On April 14, Ward 9 Councillor Pat Saito indicated lanes would be added to streets in her ward via Twitter. “Watch for Glen Erin Drive from Britannia to Aquitaine being reduced to one lane to add space for cyclists and pedestrians during the state of emergency,” she tweeted. “Working on Thomas Street. Other streets in [the] city being reviewed.”

The first bike lane in the city just opened on King Street in Cooksville on April 24, with more expected to follow. “There is a list of streets the commissioners have proposed and they’re working with local councillors so that we can close those streets off to traffic and use them for pedestrian walkways and for cycling,” Mayor Bonnie Crombie said at a Wednesday press conference.

The plans to close road space in Peel are admirable and Brampton’s move has drawn praise mostly from outside the city and among its small number of bicycling enthusiasts.

However, this comes in the context of dramatically reduced traffic in an unprecedented time. The true test of the two cities’ resolve will come when the crisis clears and Peel residents get back in their cars.

Mississauga is much better situated for a more fundamental shift to active transportation, primarily for one reason: it has far more jobs situated within its borders thanks to the efforts of its council over the past two decades to attract some of the biggest employers in the world. It’s next to impossible to move away from a car-driven commuter culture in cities where the overwhelming majority of jobs are situated elsewhere, forcing the use of highways or the GO Transit network.

Brampton’s current council has talked about embracing the 2040 Vision, the city’s planning document for the future, which embraces active transportation and the dense urban design required to support it, but members have routinely wavered while supporting the same old sprawling subdivisions that many residents and local developers continue to push.

It’s partly because Brampton has more undeveloped land, but also because the two cities have a very different commitment to density, which is the key component for active transportation.

Brown claims to support cycling use instead of cars, but has also been vocal in his desire to see The GTA West Highway built.

For now, the pandemic provides an opportunity for active transportation advocates such as Santos, to push a more progressive agenda.

In Milan, in northern Italy, an ambitious bar is being set to do the same. The city is at least a month ahead of Ontario in its pandemic curve and is cautiously casting its eye to the future. As part of its transition and recovery, it has announced 35 kilometres of expanded sidewalks, making space for cyclists and pedestrians instead of cars. The city is also reducing the speed limits of some roads to 30 km/h.

“Of course, we want to reopen the economy, but we think we should do it on a different basis from before.”

In Peel, there are hopes the moves in Brampton — which fit directives laid out in its 2040 Vision and Active Transportation Master Plan — are just the beginning. Both cities are allowing their councillors to take the lead on the streets in their individual wards best suited to cycle lanes, hoping to see significant expansion in the future.

“We would move to put other temporary lanes in place across the city where it makes sense,” Santos said. “So if councillors, for example, in Wards 2 and 6 or Wards 9 and 10 are interested or their residents are interested in asking for some extra lanes that are temporary, I don’t think we’d be opposed to that.” 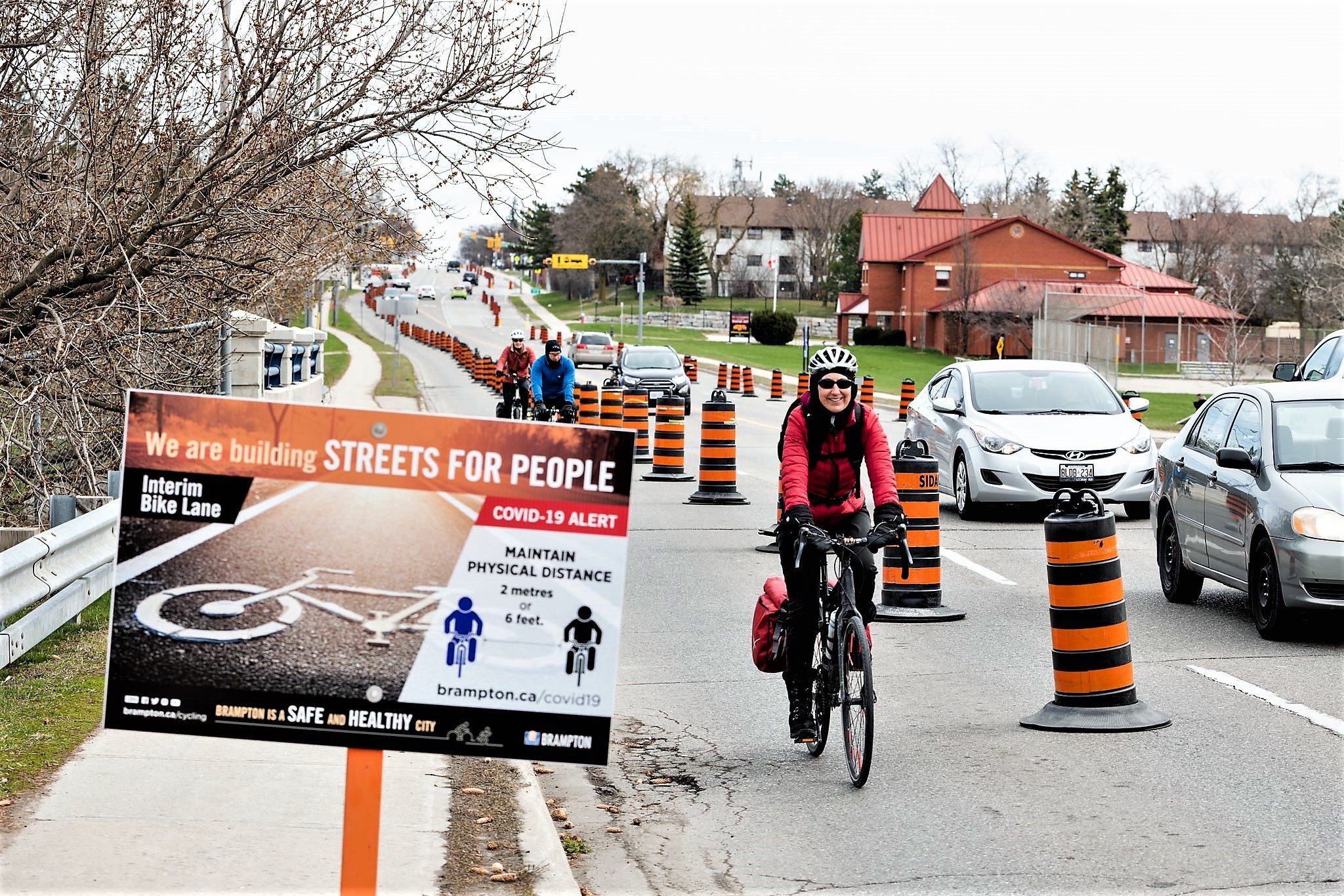 On the issue of more permanent moves, Crombie was supportive, but did not commit without the backing of council. “It’s a great thought that we look to keep some of them open permanently, but it's a discussion our council is yet to have,” she said.

Santos was more definitive in her language. Lamenting the various difficulties for residents caused by the pandemic, she said she hoped this could be one positive to come out of it.

“It’s a huge opportunity for us to make lemonade out of COVID lemons,” she said. “It's a pretty sh**ty situation we’re all in and it would be really nice at the end of this to have something new that is not that status quo, that has actually shifted the culture of the way that Bramptonians move around.”