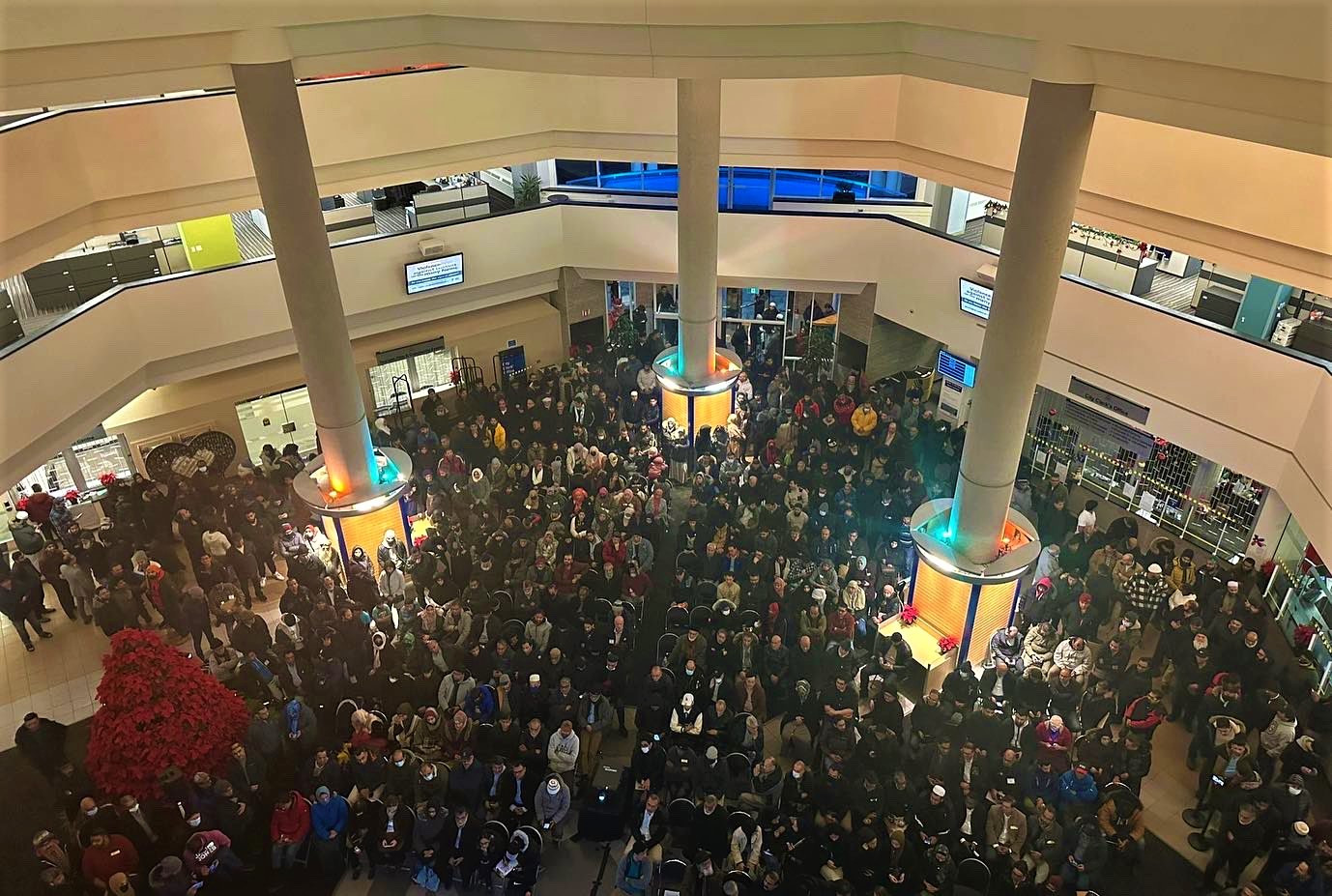 ‘Us Canadians are not a threat to you’: Are old world conflicts behind the ugly outcry against a new Mosque proposal in Brampton?

In a far corner of the city, to the north of the proposed site for the Brampton and Regional Islamic Centre, sits low density housing and a woodlot; to the south is a strip of businesses; Highway 50 forms the eastern edge and more low slung housing trails off to the west.

The 116-square-metre, two-storey facility proposed at 9445 Clarkway Drive would include a place of worship, school for religious teachings, Islamic library, gymnasium and fitness space. A total of 94 parking spots are included in the plan with two separate access points on Clarkway Drive.

The Brampton And Regional Islamic Centre (BARIC) currently sits at 4525 Ebenezer Road, serving as the only Masjid in East Brampton.

In an interview with The Pointer, a representative for the Centre said their current facility is not big enough to support the local Islamic community as its numbers continue to grow.

“For a proper mosque we need many things,” the spokesperson, who asked that no name be used, told The Pointer. “We need a prayer place, we need rooms for workshops, seminars, we need facilities for gymnasium, basketball — we want to engage the younger generation so they’re not attracted to drugs or lawlessness. So this is absolutely helpful for the area, helpful for the people. Our people are very, very cooperative, very, very peace loving.”

A report detailing the proposal was presented to Brampton Council Monday night, offering an opportunity for community members to share their thoughts. While the agenda accounted for 200 delegates, that number grew to over 400, filling the lobby of City Hall and requiring Council to only allow handfuls at a time into the chambers to delegate. The meeting itself lasted until 4 a.m., with each delegation reduced from five to just two minutes.

Brampton Council will need to rezone the parcel of land, currently designated for agricultural use, to allow the facility to be built. An amendment to the zoning bylaw will be required to proceed.

For anyone familiar with the longstanding tension that has defined so much of the political, social and cultural dynamic of the South Asian subcontinent for centuries, what unfolded Monday night and into early Tuesday morning was an unfortunate reminder that far away conflicts are often imported to Canadian shores.

The Islamic Centre’s spokesperson hinted at the likely motive behind the intolerance expressed during Monday’s meeting.

“We want to live peacefully together. We want to be helpful to our neighbours, to everybody. This is the model of our religion and so we want to live in peace and harmony with other people. They may be Hindu, they may be Sikh, they may be Christians. We don’t have any hatred for anybody. We believe Canada is for all people.”

Scrolling down the long list of delegates signed up to speak during the planning meeting, the vast majority of names have one thing in common: they are Hindu.

A point not lost on some who commented using Twitter.

When accommodation of Friday afternoon prayers for devout students in the PDSB who practice their Islamic faith closely became an issue in 2017 it was largely right-wing Hindu-nationalist sympathizers (an ideology exported from India and driven by the country’s extreme ethnonationalist BJP government, which openly promotes an anti-Muslim agenda) who led protests against the school board’s accommodation. A man named Ron Banerjee, who led rallies outside the PDSB’s Mississauga headquarters, is a notorious Islamophobe and has run Hindu advocacy groups in Canada that have promoted anti-Muslim views. He was sued by a well known Mississauga businessman and had to apologize after Banerjee made shockingly Islamaphobic public statements about him.

During the pandemic, when Mississauga moved to allow the Azan, the Islamic call to prayer, outside Mosques, Hindu groups decried the decision, but demanded similar allowances at their own places of worship.

Now, Hindus in Brampton appear to have organized against the approval for a new Mosque location.

During the delegations Monday, two residents, Raima Ahmed and Jawad Malik, said that whether consciously or unconsciously, Muslim community members, like them, have been stereotyped by those claiming to have local community-based concerns about the Islamic Centre proposal.

“I just want to remind everybody that Brampton doesn’t belong to one religion. We are a country of many religions and people coming here, saying ‘We are your taxpayers’. We are all taxpayers, we all belong to this country. Canada is ours and the freedom to practice religion is a fundamental value,” Ahmed told Council.

“We have never shied away from this practice because of such things as hesitancy or traffic or car insurance. I feel like this is deeply rooted somewhere, there’s an agenda going on. I’ve seen with my eyes here, I’ve seen WhatsApp groups against this, telling all of these people here what to say, what point to focus on, what is their weaker point. We’re here speaking from our heart, we’re representing our religion. We want a place to practice our religion, we’re not asking anything unreasonable in my opinion. I understand there are issues such as accidents and stuff, but those are not dependent on our religious facility being built there. The other thing I wanted to say is that it’s just giving me this feeling, are you trying to say that us building a Mosque there or building an institution there is going to negatively affect your security? Are you saying we’re a threat to you? Us Canadians are not a threat to you. This is Canada. We live here, we’ve lived here for generations.”

Those who spoke in support of the project told Council it will be an important social support system for all community members, will have sufficient parking to accommodate patrons, will offer humanitarian aid both globally and locally, provide recreation opportunities to guests, supply food for those in need and will offer a library and research centre to support students.

“I’m 42 and I moved here when I was 16. So as you can see I know how Brampton has grown, but ever since we’ve been here we’ve always thought we’re lacking something,” Brampton resident Nusrat Quazi told Council.

“We see the other community having children going to their spiritual places and getting their teachings and everything, but I feel like we don’t have that place here and this BARIC project is coming up with this wonderful project. I hope even though we didn’t get it, maybe my future children [will].” 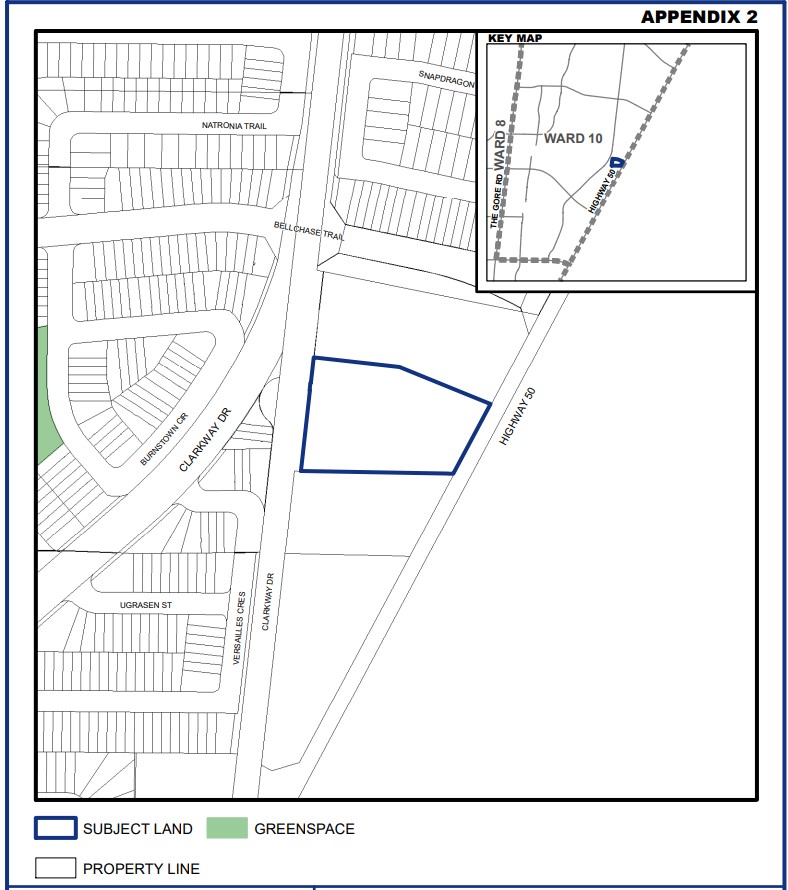 Location map of the proposed Brampton and Region Islamic Centre.

Others who delegated against the project associated the proposal with the potential for increased crime—an unsubstantiated claim—and some suggested it would no longer be safe for their children to play outside.

“I sincerely and from the bottom of my heart request [you to] consider the request of Wards 9&10. We are the affected people, we will be affected. We are your voters, you must protect our interests first, protect Brampton’s interests first,” Brampton resident, Vijay Pandya, who opposed the project, said.

Many cited traffic concerns, worries about increases to insurance premiums (without any explanation) and a reduction in property values. Delegates claimed the centre would create litter and draw outsiders to the community. Detractors claimed trees will be lost, air quality will be impacted, noise pollution will be common and the location is inappropriate.

Delegates with common Hindu names followed each other and made similar claims about the impacts of the Mosque, with no evidence or research to back their assertions.

Hindu aggression toward Muslim communities stems from the invasion of what’s now known as India in the early 1500s, which led to two-and-a-half centuries of Mughal rule over Hindus. When the country was partitioned in 1947, following British colonial dominion, Pakistan was carved out for Muslims, but some 200 million still live in India today. The countries have fought two wars since and India’s commitment to secularism has been replaced by the view of Prime Minister Narendra Modi and his BJP government (the Party promotes Hindu nationalism) that India is a Hindu state.

These sorts of views are opposed to basic Canadian values and the City of Brampton, like Mississauga, has in the past maintained a practical approach when old world tensions have defined local controversies.

The City was widely lauded for its 2008 Places of Worship Policy Review which introduced Official Plan guidelines to ensure Brampton’s diverse faith communities would be properly accommodated.

Past restrictions due to a lack of parking and issues around traffic volumes that often prevented diverse communities from getting places of worship projects advanced, were addressed thanks to the policy and a solutions based approach was adopted with criteria for issues such as parking and traffic.

More recent moves, such as a sustainability measurement to ensure faith-based facilities can be served by transit, have been introduced.

The City’s Sustainability Score for the new Mosque proposal determined the site is transit supportive and meets other criteria for such use.

These types of objective approaches prevent groups from being discriminated against and counter efforts by those with an agenda seeking to oppose faith-based community organizations who want to practice their religion as they are constitutionally entitled to do in Canada.

The groundbreaking Places of Worship policy was a response to decades of Christian opposition to new Gurdwaras, Mosques, Mandirs and other places of worship diverse residents in Brampton tried to establish since the ‘60s, when the first non-European immigrants began to arrive.

In recent years, across Peel, the intolerance around places of worship issues and the establishment of new temples has often involved tension between religious minority groups.

When opposition to a Mosque in Meadowvale, in Mississauga’s northwest area, flared up seven years ago, blatant Islamophobia was disguised in arguments that claimed traffic and parking were the issue.

Mayor Bonnie Crombie called out the behaviour and City officials countered that all parking and traffic issues had been addressed in the application, which met all of the zoning requirements.

“It was uncalled for, it was un-Canadian, it was heinous and it was wrong,” Crombie said at a council meeting, addressing Islamophobic comments that had been made about the Mosque proposal in 2015.

“This proposal met all of the city’s planning requirements, including zoning and parking requirements and addressed traffic concerns,” Crombie said at the time. "All residents must have confidence in their municipal government that applications will be reviewed and adjudicated fairly and without bias.”

It was also pointed out that other places of worship had not received the same scrutiny when they were proposed. The Meadowvale Mosque application was resoundingly approved by Mississauga council. 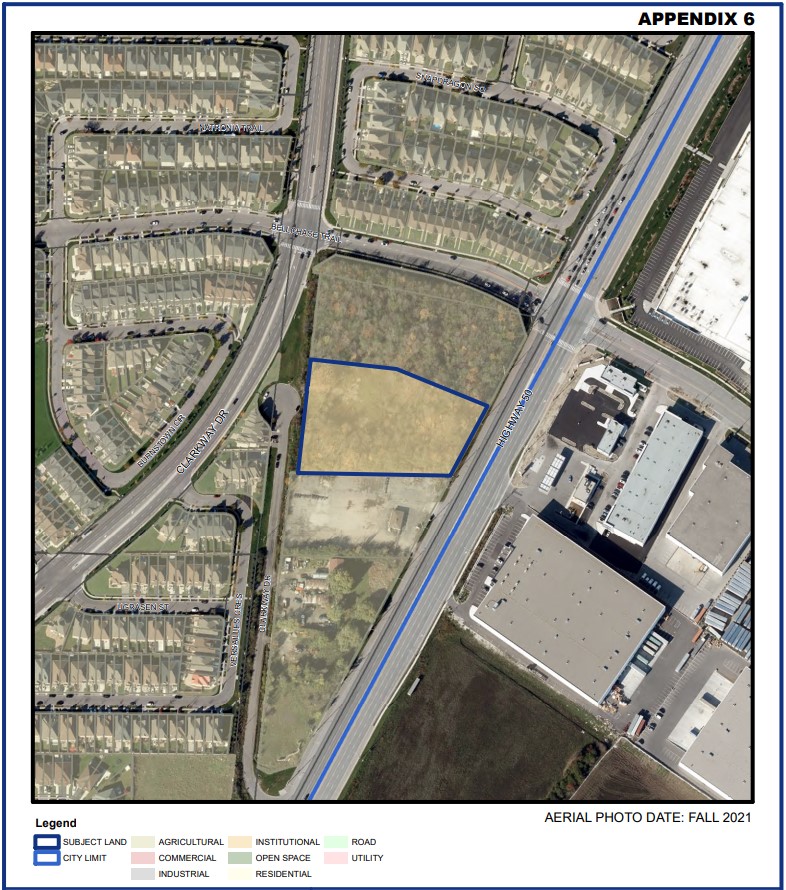 Aerial and existing land use photo showing where the Brampton and Region Islamic Centre hopes to build the facility.

The Brampton and Regional Islamic Centre representative said that although they suspect there may have been ulterior motives behind the delegations on Monday, members do not want to point fingers.

The spokesperson said the new centre would be open to everyone because “knowledge is universal.”