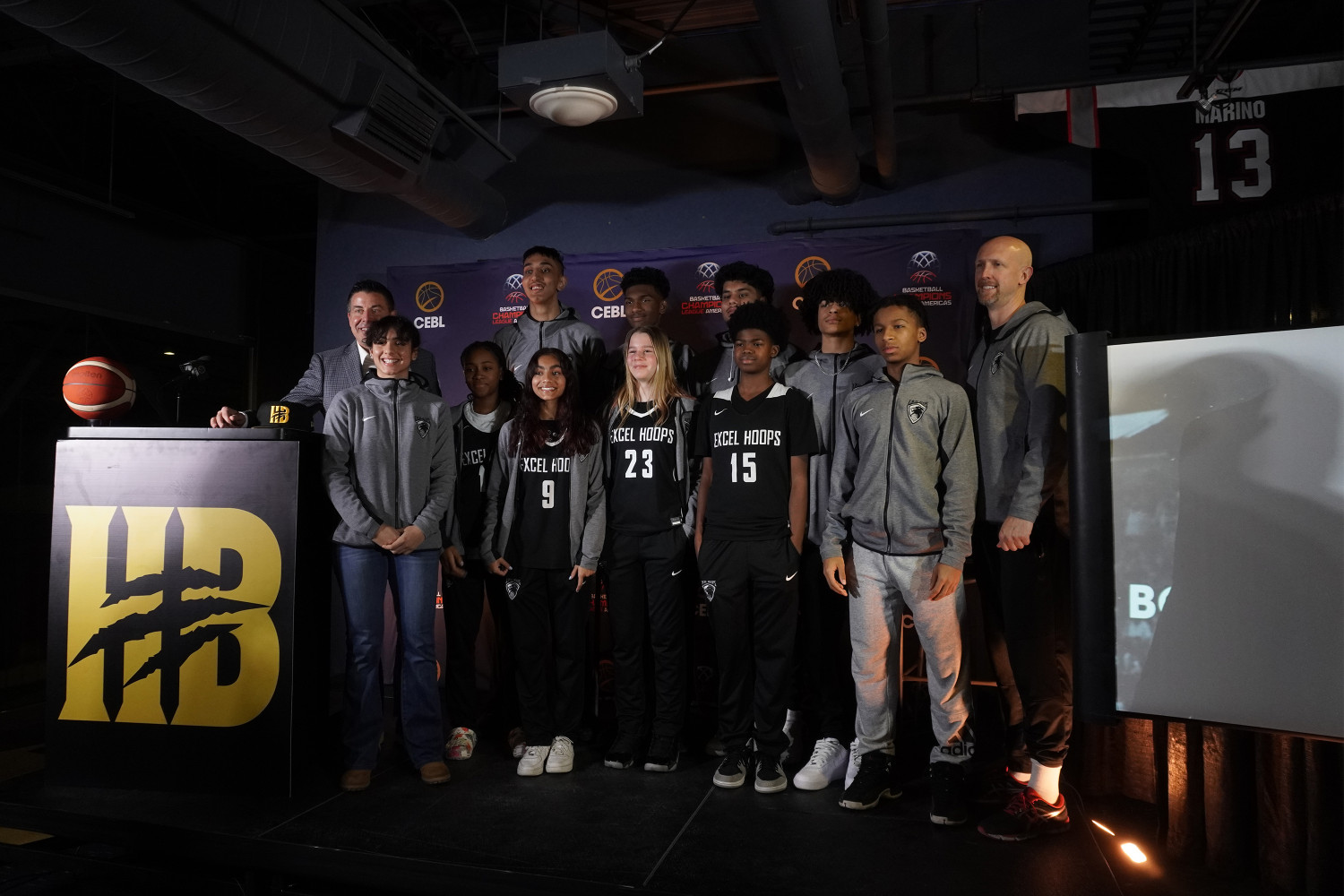 Can Brampton capitalize on the pull of professional sports?: bringing basketball and cricket to a starved market

Seven players raised and developed in Brampton captured headlines across North America during this year’s FIFA World Cup, representing the Canadian side in its uplifting performance on the sport’s biggest stage.

But with the dramatic demographic shifts that changed Brampton’s sports scene almost overnight, mining talent and interest in sports such as hockey and baseball has been a much more difficult proposition in recent decades. Meanwhile, sports like soccer, basketball and cricket have never been more popular here.

The city is now exploring a new world class cricket stadium and the Honey Badgers of the Canadian Elite Basketball League just moved into the CAA Centre.

Could it be a sports renaissance in Canada’s ninth largest city, which hasn’t had much to cheer for in decades?

Power of Sport is the title of a 2022 report by the Canadian Centre for Ethics in Sport. It addresses issues around the multiple ways athletics improves the social, physical and mental well being of children and adults. It also fucuses on community development and the economic advantages to municipalities that capitalize on the potential of sports at all levels. Professional teams in particular can draw significant commercial investment and inject millions of dollars into a local economy, with almost $7 billion spent in Canada in 2018 on sports tourism alone.

Brampton, unfortunately, has not been able to capitalize on such investments.

The building where the Honey Badgers now play had to be subsidized by the city’s property taxpayers to the tune of $6 million as of 2009, due to poor revenues for the teams that used the space. The former principal tenant, the Ontario Hockey League’s Brampton Battalion, eventually left the city in 2013, then the Brampton Beast hockey club took over, only to fold in 2021 after failing to draw much community support. Attendance for both teams was poor and they were unable to serve as catalysts to create a sustainable sports, dining and entertainment scene around them.

With the changing demographics, basketball and cricket could be the answer for those convinced sports has to be a key driver in any big city’s economic development plans.

Mike Morreale, commissioner & co-founder of the Canadian Elite Basketball League (CEBL), said Brampton was chosen, in part, because of the CAA Centre’s availability… and the potential in such a big market.

The Honey Badgers were formerly a Hamilton team, but began looking for another home after being displaced from the city’s FirstOntario Centre due to renovations over the next two seasons.

“Brampton was always on the map, Brampton has everything you would want in a city,” Morreale said during a press conference at the CAA Centre December 1. “Certainly an arena is a very important part of it and that being available is a very important part of it, but also the diversity is incredibly important. The way the city looks and feels and is part of the fabric of the community is important – basketball is relevant, basketball is a global game.”

The announcement, made alongside Deputy Mayor Harkirat Singh, councillor for Wards 9 & 10, and the Honey Badgers general manager Jermaine Anderson, came with a second piece of good news – the CEBL is partnering with the City and the International Basketball Federation (FIBA) to host the third window of group stage games for the upcoming Basketball Champions League of Americas (BCLA).

The competition will feature the 2022 CEBL champion Honey Badgers (who won the title while still in Hamilton) representing Canada, Libertadores from Mexico and Real Estelí from Nicaragua. 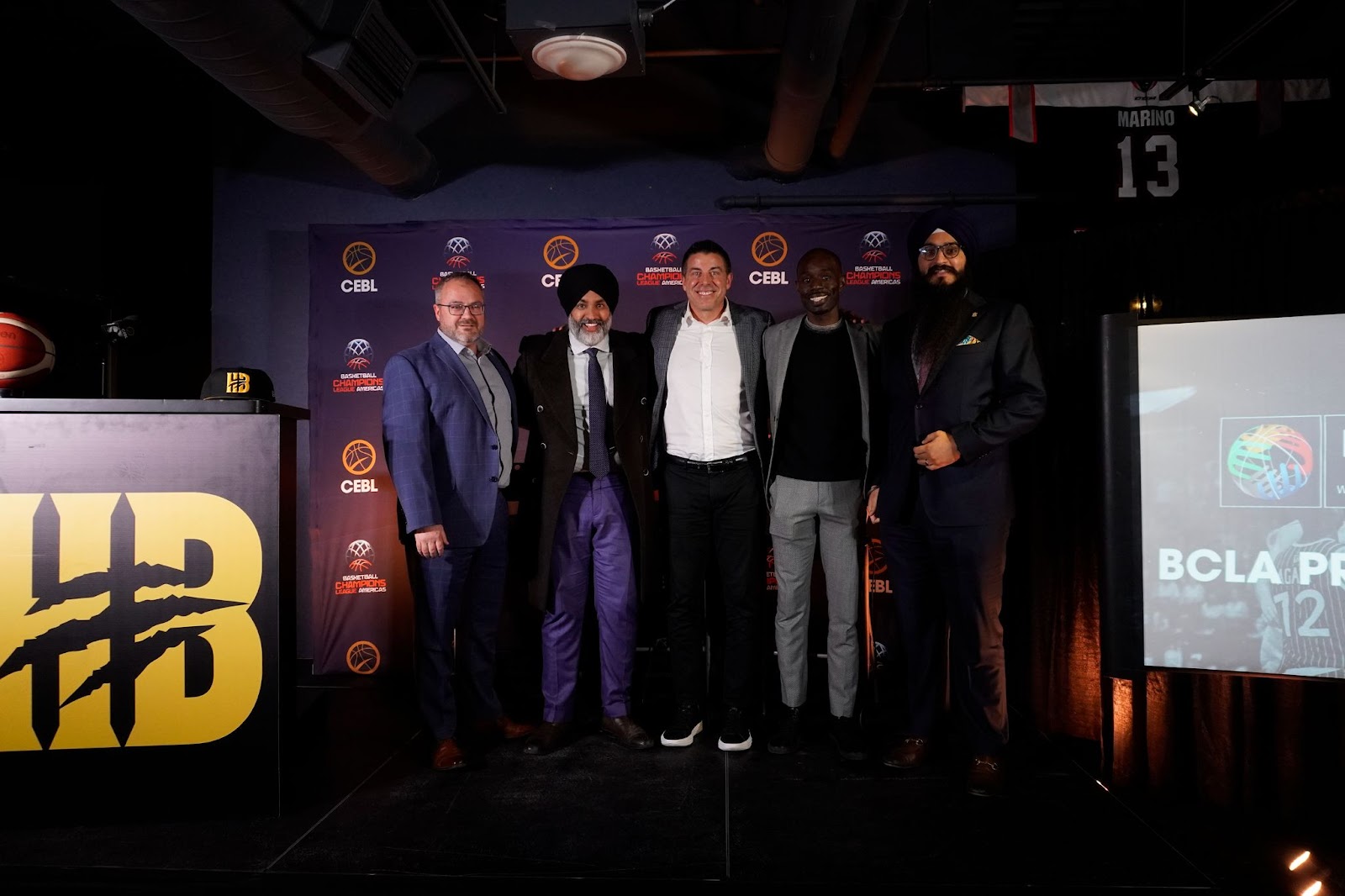 Morreale said the club can anticipate thousands of spectators in attendance over 10 regular season games in the 10-team league plus the potential for playoffs and international tournaments.

During the semifinals and finals this year (both rounds featured the Honey Badgers but they could not play at home due to the renovations) games averaged about 2,800 fans. Morreale has said average attendance throughout the season this year was about 2,000.

He mentions the potential of international competition and what the league hopes to accomplish in the FIBA event (the Honey Badgers later lost their first two games, including a tough one Sunday to Real Estelí, 82-94, after running out to a big early lead).

“Our goal is to become the top team in our grouping and if that does happen we will be hosting two more games here in March and probably some South American teams as we switch over some divisions. So the exposure alone over the next several months will be massive, then as we get into the regular season, having people in this building, eating and getting entertained, and spending money and us being able to deliver a community program.”

Basketball isn’t the only big news for the CAA Centre and Brampton.

On Wednesday, Council approved a staff recommendation to launch an expression of interest in early 2023 for a multipurpose cricket facility on the CAA lands. Staff is expected to return to Council in the later part of 2023 with a report on the potential for a world class stadium to host professional international events for the sport, which is wildly popular in many of the city’s diverse communities.

Staff estimate the engagement, including community surveys and a media campaign to gauge interest, to cost $400,000.

Questions have been previously raised on how the city will pay for such a stadium, but participation numbers show the demand for more cricket infrastructure is there.

One possible option was outlined during a presentation to the City on June 8, detailing a proposed partnership between Cosmos Sports & Entertainment, Precinct Group, Stafford Sports and the municipality.

The proposal involves the transfer of 110 acres of CAA lands by the City to the development group in exchange for a commitment to construct a world class cricket stadium paid for by private partners. The plan also includes multiple highrise condos on the property, other future housing, commercial investment, dining and entertainment, as part of the overall redevelopment of the entire site. 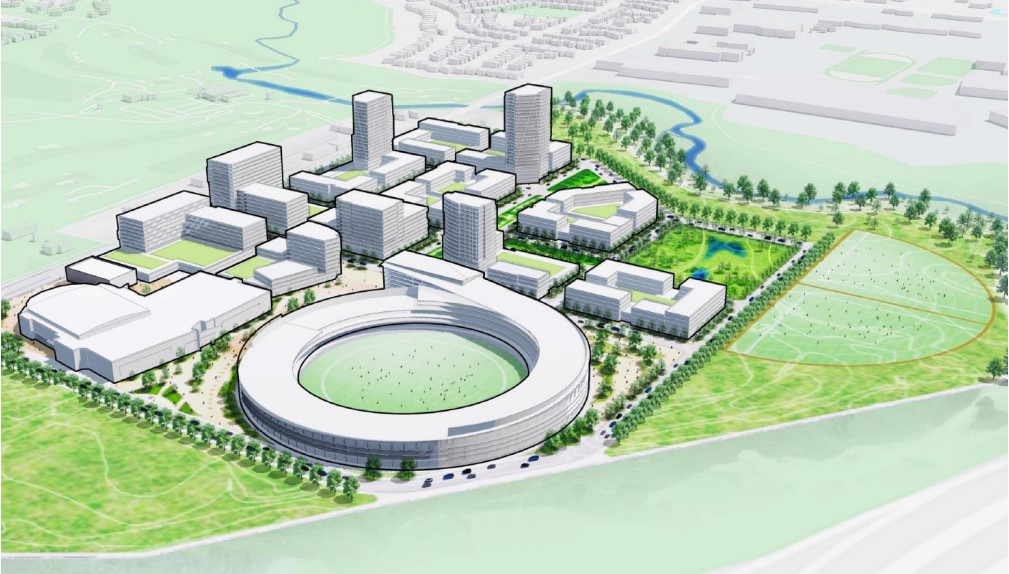 Brampton’s conceptual CAA master plan included in a staff report to Council is similar to renderings shown earlier in the year by a group led by local sports entrepreneur Cary Kaplan.

Cary Kaplan, founder and president of Cosmos Sports, is spearheading the Cricket plan, and was involved with running the Brampton Beast Hockey club. He told The Pointer his group remains interested in a “world class cricket stadium” in Brampton, even though Wednesday’s council decision to move forward with the exploratory work did not include any commitments to partner with the consortium which includes American investors and the support of Cricket Canada.

“What has to happen at the CAA lands is that it needs to be more than just an arena, it needs to be a full development,” he said. “That’s what we found with the hockey team, and that’s what the Honey Badgers will find as well, as it’s a very nice venue but it would be much more successful if it was surrounded with complimenting sports and entertainment on the site.”

Kaplan believes a large-scale development is needed—his team’s presentation in the spring outlined plans for a 20,000-seat stadium surrounded by major residential and commercial developments on the sprawling property just north of the 407 along the east side of Kennedy Road. The City’s own staff report proposes a 5,000 to 20,000-seat stadium.

“The proposal we’ve made doesn’t cost taxpayers any money, in fact it’s positive it will result in tax revenues for the city, tourism dollars, user fees and job creation,” Kaplan said. “We’re sort of standing on our hands and trying to get City Council and City staff to take a serious look at it, and they haven’t yet and we hope they will soon.”

Concerns expressed after the presentation by members of the previous council included traffic congestion in the surrounding area during events and the need for greater community engagement to learn what residents want the giant, City-owned property used for.

Councillor Michael Palleschi said the $1 million per-acre valuation of the CAA lands put forward by Kaplan’s group was as much as four times less than what the land is actually worth. He said, at a minimum, its market value is $2.5 million an acre. Kaplan has said the price of the land is not an issue, and he was only using the figure provided by City staff earlier in the year.

During Wednesday’s recent meeting, discussion was limited, with Councillor Singh thanking staff for their report before moving forward on the recommendation to launch an expression of interest to gauge what the community and other stakeholders want. No information is expected to come back before the last quarter of next year, meaning it is unlikely any money for possible capital costs will be included in the 2023 budget.

Mayor Patrick Brown promised a world class cricket stadium would be built by the end of his first term when he ran for the job in 2018. He then had $35 million for a stadium removed from the budget plan as part of his refusal to expand overall spending by City Hall.

His failure on the cricket front has been partly eased by the CEBL’s decision to move the Honey Badgers to the city. But Brampton’s potential as a professional sports market still has not been properly tested, with the right product for the city’s demographics.

On Wednesday, Singh said the staff report on a possible cricket stadium will hopefully answer some questions.