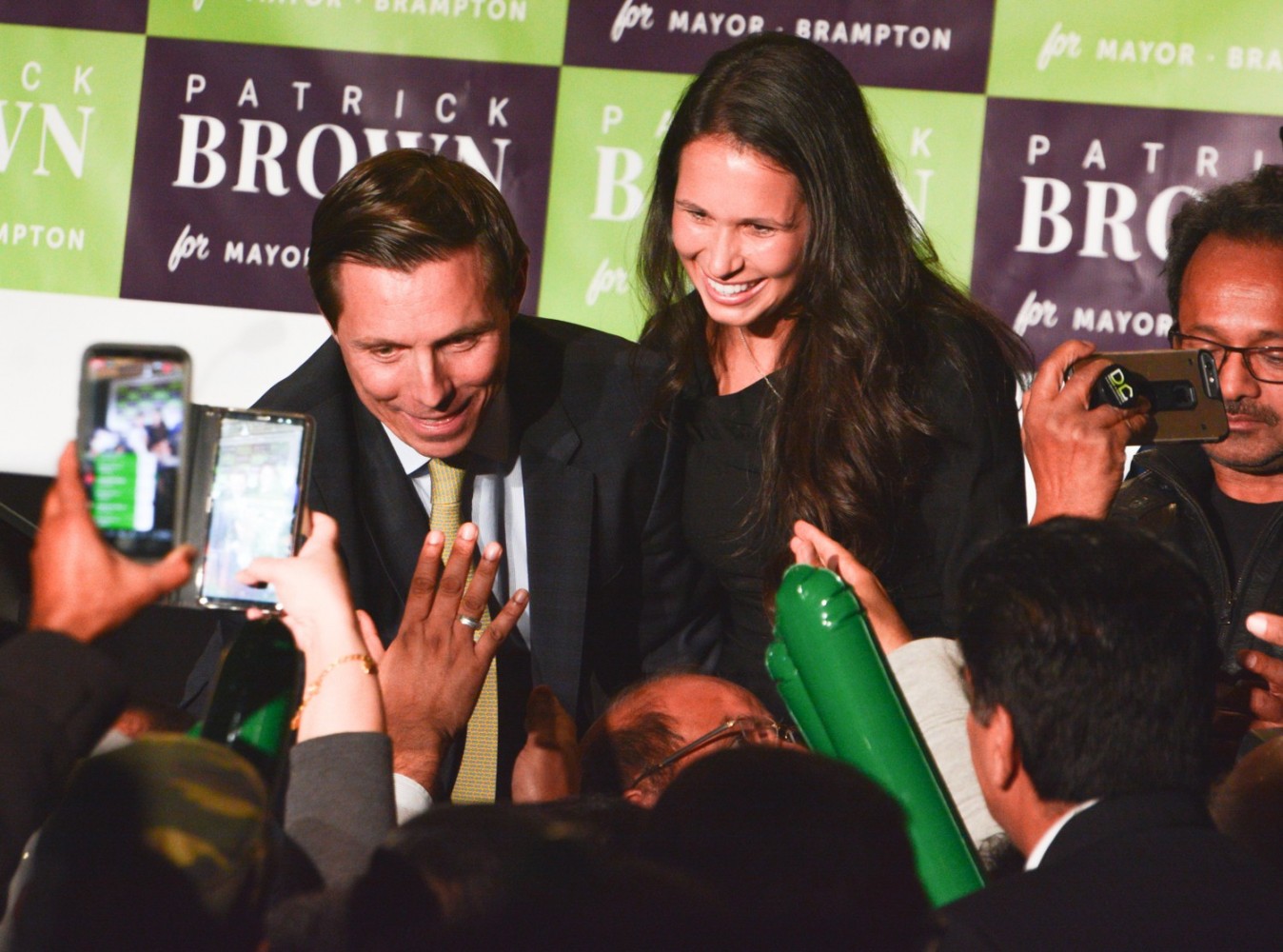 Patrick Brown has been reelected as Brampton’s mayor for a second term, holding onto his seat with 59.65 percent of the ballots cast, followed by Nikki Kaur, who received 25.55 percent of the vote.

“I feel great,” Brown told reporters at his campaign headquarters after the election victory on Monday. “A big mandate and it allows us to go back to City Hall and work confidently knowing that we have the support of the vast majority of the City.”

He was first elected in 2018 with 44.43 percent of the vote, narrowly beating incumbent Linda Jeffrey, who received 40.73 percent.

In one word, Kaur said she felt, honestly, “okay.”

“We’ve done so well. We’ve had a very limited window and we ran one of the best campaigns. I’m so proud of it, not a lot of people can do that. We pulled together everyone in Brampton that was joining these areas and we had somebody with a 20 year political career running around doing his best– that speaks volumes for us.”

The last term was marred by a series of scandals that surrounded Brown, with councillors Jeff Bowman, Pat Fortini, Charmaine Williams, Gurpreet Dhillon, Martin Medeiros and Doug Whillans alleging “democracy is under siege” after witnessing alarming conduct under Brown’s leadership including contracts that were quietly handed to his associates and the hiring of unqualified, politically connected employees into City Hall’s bureaucracy.

Only Medeiros and Fortini are returning after Bowman and Whillans stepped down. Williams moved onto Queen’s Park in June, as an MPP, and Dhillon lost his seat Monday following allegations of sexually assaulting a Brampton businesswoman, which he denies.

Former CAO David Barrick, who was brought to Brampton by Brown, was fired after improper hiring practices and questionable procurements for City contracts were revealed. Questions were also raised after former integrity commissioner Muneeza Sheikh, who was let go when Council learned she had billed taxpayers $321,600 in 2020 then $340,000 in 2021 for the part-time role, was hired despite her association with Brown and her lack of experience.

The six members of Council supported a forensic investigation into the failed Brampton University project after a staff report came back that found work on the contracts that went to friends of Brown and his ally councillor Rowena Santos was never completed. The firm whose point person on the project (Rob Godfrey) is a close friend of Brown received more than three times the amount of money than what Council approved.

Four forensic investigations into allegations of wrongdoing around other procurements involving Brown were also ordered. These include one for legal billing to the City involving a lawyer used by Brown personally; the RFP that led to the appointment of former integrity commissioner Muneeza Sheikh, who had personal connections to Brown; the RFP to shape the Municipal Development Corporation initiative, which was given to an associate of Brown who had no experience in the area; and the RFPs around COVID-19 supply purchases, after a private equity firm was given a contract for masks that was supposed to be for $82,000 but ended up costing $896,000.

During this time, there was a distinct 6-5 split on Council, with Brown condemning the investigations and senior staff changes alongside councillors Santos, Paul Vicente, Michael Palleschi and Harkirat Singh. All four were reelected Monday.

After Williams was elected to represent Brampton Centre as MPP, the divide in Council became 5-5, as the business of the city was ground to a halt following a series of cancelled meetings by Brown. 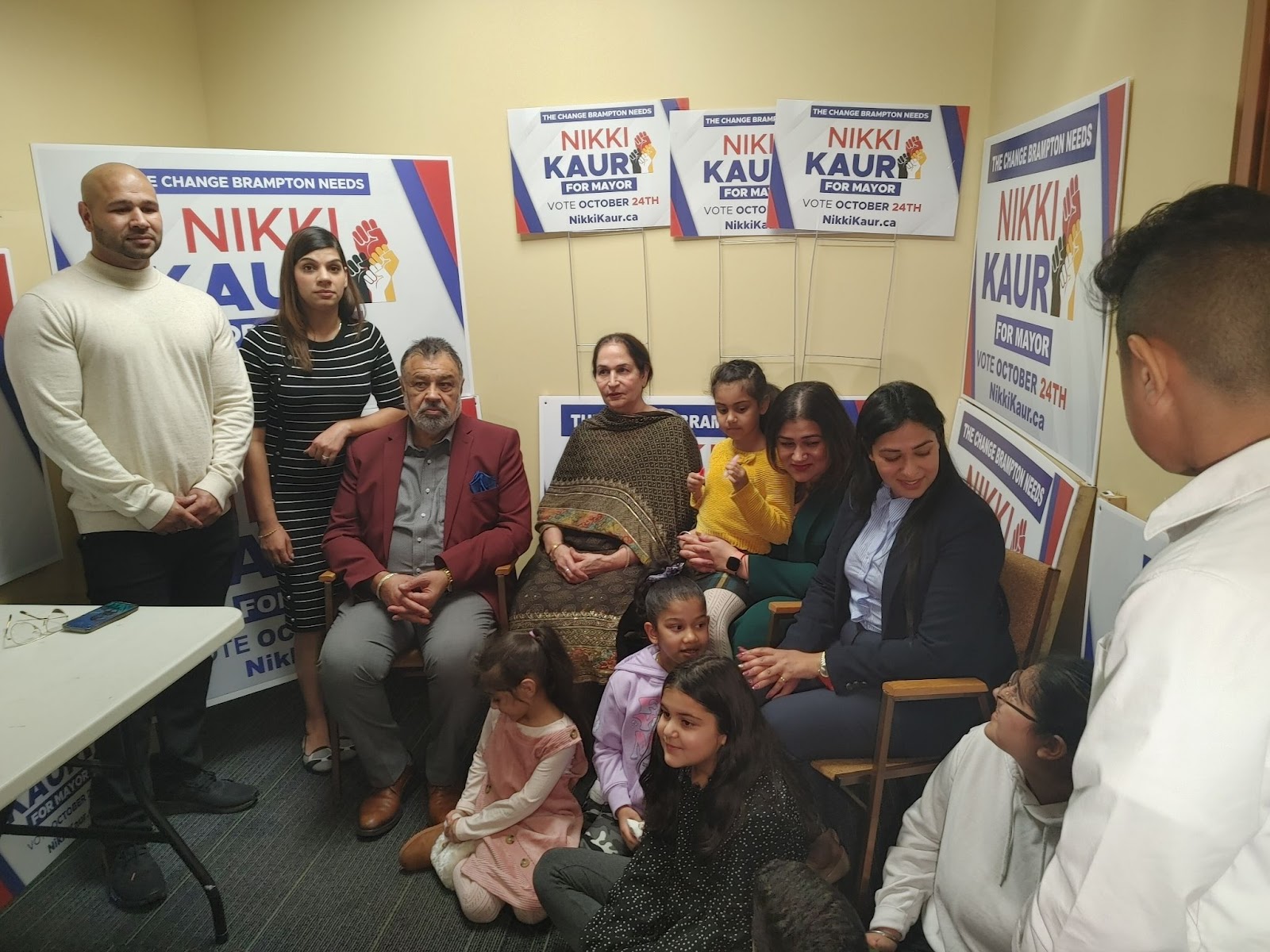 Nikki Kaur watches the results live with her family at her campaign headquarters on Monday. One of Kaur’s main focuses as a mayoral candidate was addressing the mismanagement of finances at City Hall.

Kaur was on an unpaid leave of absence from her role at the City while she campaigned.

After the results Monday, Kaur said she’ll be returning to her job. But first, she plans to see if she can take off a few days extra to spend some time with her family.

“I’m more worried about some of my family members to be honest with you. I’m okay, I’ve seen a lot in my life already and I know this is not the end of anything, this is just the beginning. We set out a brand, we made a brand and we did it in less than two months, which speaks volumes for us.”

She isn’t discounting other possible opportunities in politics, “not saying no to anything in the future.”

Brown said, “This is a win against the politics of negativity, of mudslinging.” After his victory he also tweeted out his congratulations to the same four councillors who supported him through his first term and voted with him to cancel the six forensic investigations.

The abysmal turnout, with less than 25 percent of eligible voters casting a ballot, could have helped Brown, who did very little campaigning on his platform, choosing instead to focus on those groups he had lent political and financial support to.

He promised to hire hundreds of new police officers to combat crime after freezing the City’s budget for four years (before refusing to support a successful hospital levy vote this year). The police budget is covered under Peel Region, where he also tried to curtail needed investments. He did not explain how he will continue to push through budget freezes, as he promised during the campaign, while simultaneously making the badly needed investments he also promised.

He faced criticism for ignoring Brampton when he spent almost half the year campaigning across Canada, while mayor, to win the Conservative Party of Canada leadership race, which he was disqualified from for allegedly violating rules.