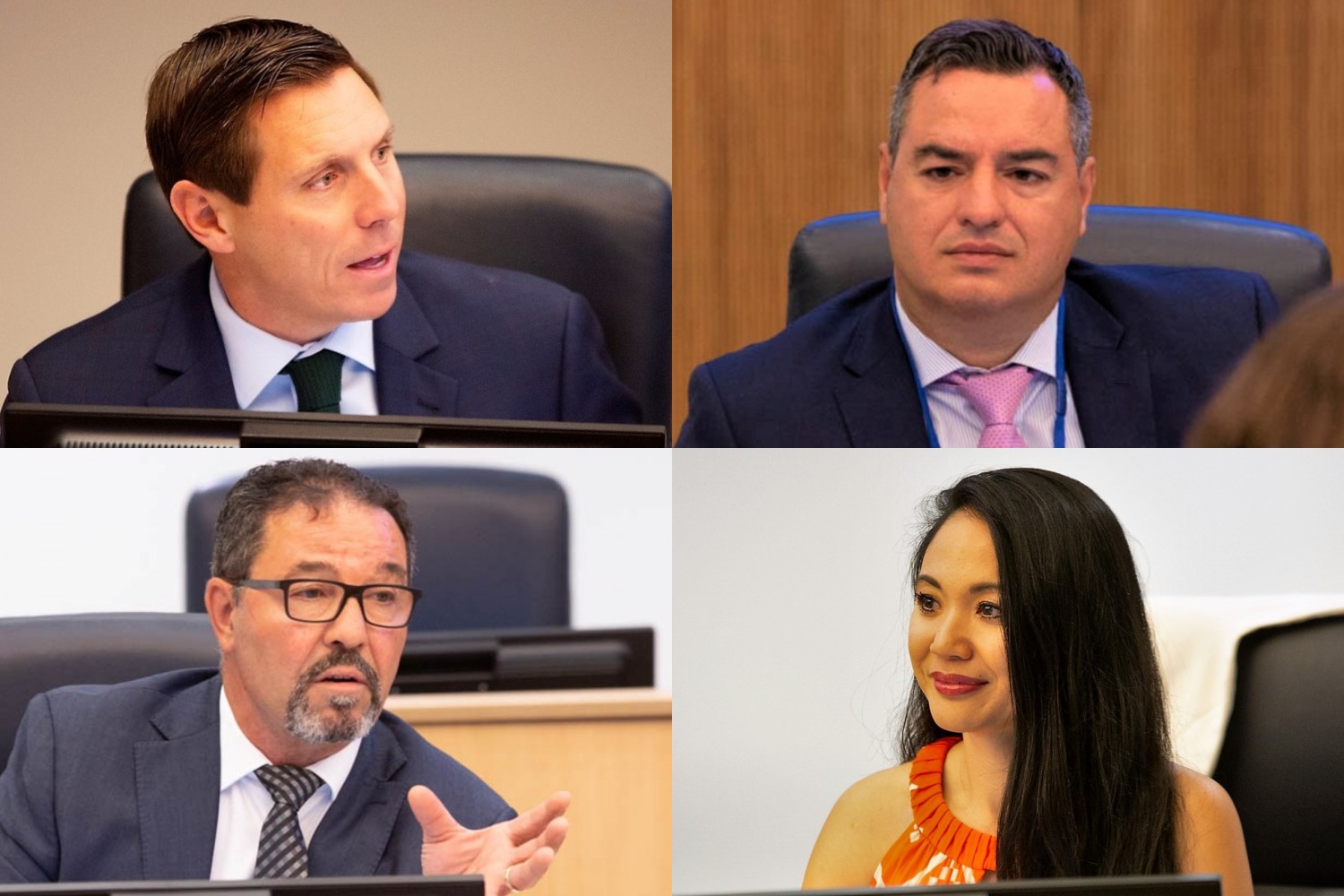 After opposing groups of councillors refused to meet for weeks, Brampton Council’s summer recess was cut short when the city’s elected officials finally agreed to sit down in the same room. But that’s about all they were able to agree to. Two meetings over the last week saw accusations of corruption lobbed across the aisle as warring factions on council continue to drive the wedge deeper between the two sides, providing little hope that key City projects will move forward before council’s dissolution for the October municipal election. However, residents were provided with tidbits related to a pair of significant pieces of work at City Hall: an update on the ongoing investigation into BramptonU and allegations that hundreds of thousands of dollars of City contracts were handed to political allies of the mayor and Councillor Rowena Santos—much of the work for which was never completed.

The full report is expected to be ready for the September 14 council meeting, with investigators planned to attend to answer questions councillors may have. According to interim CAO Paul Morrison, the forensic team is currently conducting interviews with staff.

“What quite often happens in an investigation is it starts out here,” Morrison said, holding his hands out. “And then when you start to ask questions it starts to go here,” he said, stretching his arms. “It has been expanding.”

The audit was ordered by Council on May 18 after a staff report showed much of the work meant to study the potential of Brampton’s own standalone university was never received and some of it arrived 17 months late. At least one of the two firms hired to do the work was not qualified for the lucrative job. Questions have also been raised about the quality of the work that was done.

Morrison says he has stressed to the forensic team that Council’s intent is to have as much information made public as legally possible once the investigation is completed.

“Our staff has been extremely cooperative, as the investigative team has said, with providing the information. So we’re very happy with our input there.”

When the report is completed, Morrison said he will ensure each member of Council receives it at the same time so they have an appropriate amount of time to review it before the meeting. 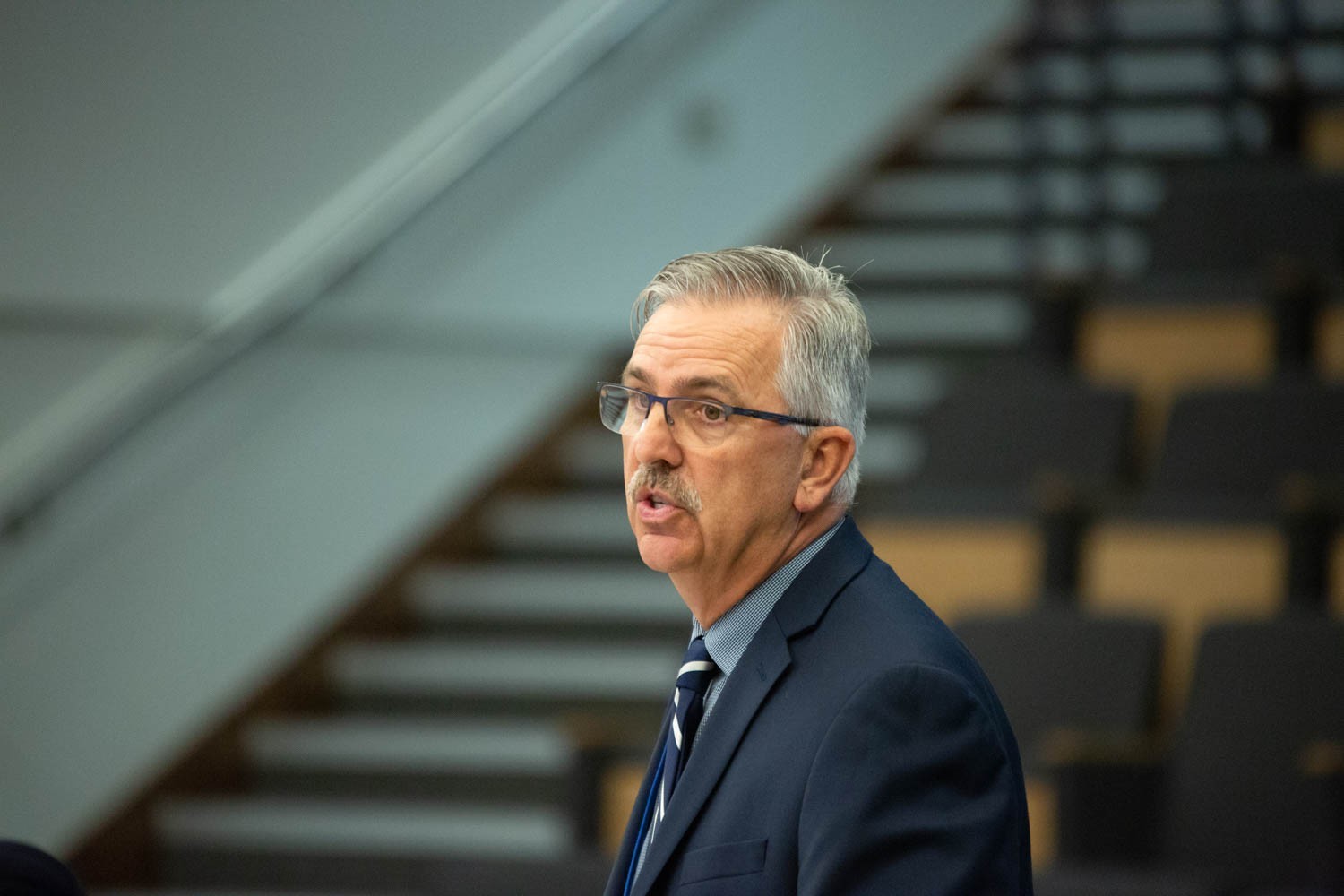 Brampton's interim CAO Paul Morrison says the final report in BramptonU will be made public in September.

The total investigation is expected to cost the City $100,000.

Mayor Patrick Brown claimed the investigation has been “tarnished in terms of neutrality”, and questioned whether councillors have been interfering. Morrison assured him that it has not been interfered with, and the audit’s steering committee, which includes Councillors Gurpreet Dhillon, Pat Fortini and Jeff Bowman—members of Council who have been critical of Brown—do not have the authority to give direction to auditors.

Councillor Rowena Santos and Brown are directly linked to the two firms that billed more than $600,000 for work that either was not completed, or failed to meet the objectives of the project.

It was revealed that Santos engaged her “mentor” David Wheeler, without council’s knowledge, to do the work and that he began billing the City for overseas travel and accommodation (it’s unclear where) before he even had a contract.

The other firm, Stakeholder Research Associates, employed Rob Godfrey as a senior associate when it was given a contract that was only supposed to be for $170,000 to do work to help launch BramptonU. Despite the lack of council approval, and without the knowledge of a majority of councillors, Godfrey’s firm was given more than $500,000, and much of the work was never received. Brown has publicly stated that Godfrey, son of Postmedia Chair Paul Godfrey, is one of his closest confidantes and a key political advisor.

Brown has not been supportive of the investigation. On May 31, he voted alongside Council allies against supplying the independent auditors with whatever materials they may need to perform the audit. In favour were councillors Doug Whillans, Jeff Bowman, Martin Medeiros, Charmaine Williams, Pat Fortini and Gurpreet Dhillon. Voting against were Rowena Santos, Paul Vicente, Michael Palleschi, Harkirat Singh and Brown. It’s unclear why Brown or Santos did not declare a conflict of interest on the vote, as they are both directly implicated in the allegations.

Brown, who has already announced his bid for reelection, has refused to answer questions about his links to BramptonU contractors.

“We are ensuring that this is a very unbiased, just process held by the investigative services,” Morrison said during council. “No direction is given to the investigative team. I can tell you they’re very professional, they receive any information that is said but they don’t take direction—they create the direction themselves.”

Another topic of discussion during Wednesday’s meeting was a proposal for a public-private partnership to build a cricket stadium on the lands at the CAA Centre.

The facility was originally proposed for Gore Meadows Community Centre before the CAA lands were recommended to accommodate the high traffic volumes associated with major events.

Questions have previously been raised about how the City will pay for the project. It’s clear the demand for more cricket infrastructure in Brampton is there.

On December 6, 2021, Council directed staff to report back on a framework and public private-partnership option for a multi-purpose cricket facility at the CAA lands, where the City retains ownership of all or most of the CAA lands, and options for possible private sector facility development and/or management, for a possible request to begin procurement process for Council approval.

At Council’s meeting on Aug. 10, staff requested allocation of $400,000 to move forward with an expression of interest from contractors and the potential plans they would propose for the future site.

A tender for work could be sent out in the second or third quarter next year with a new term of Council, depending on the results of public consultations.

Marlon Kallideen, Commissioner of Community Services said public consultations are expected to take place in the second quarter of next year.

“Staff is going to engage in some fulsome public engagement to finalize the CAA masterplan which will go out. In the meantime, we will be gathering information from the public, getting a gauge of the market place to see how many agencies international or local is going to be interested in it,” Kallideen explained.

“We’ll be coming back and setting up in the new term of Council a task force made up of members of Council and staff from various departments to actually have a look at what the public engagement in the next few months is going tell us, finalize the CAA masterplan, and discuss the RFP process going out, and be part of that evaluation of submissions being received.”

Councillor Bowman requested that further community consultations be done before any expression of interest is sent out to contractors.

“I still have difficulty with going forward with all that work and the expense of doing that before we’ve had public engagement,” Bowman said. “My concern is what if we do the public engagement, and I’m not saying it will or won’t, what if the overwhelming majority of public engagement said this is the wrong place and we’re not interested?”

Councillor Medeiros took aim at the public-private partnership aspect, suggesting that having it done without the private sector shouldn’t be off the table.

“I’m good to support this along the lines as long as we have a real robust public engagement aspect,” Medeiros said. “I do understand sometimes it’s even easier to go to a public engagement once you solicit ideas and then go to them, present the actual ideas instead of pie in the sky, ‘Here’s a piece of land what would you imagine going there.’ I’m willing to go through the exercise, I think it’s a valuable exercise, I’m willing to support it, but I do think there has to be some ongoing conversations.”

Council requested staff return to the September 14 council meeting with a detailed plan on what the public engagement process will be.