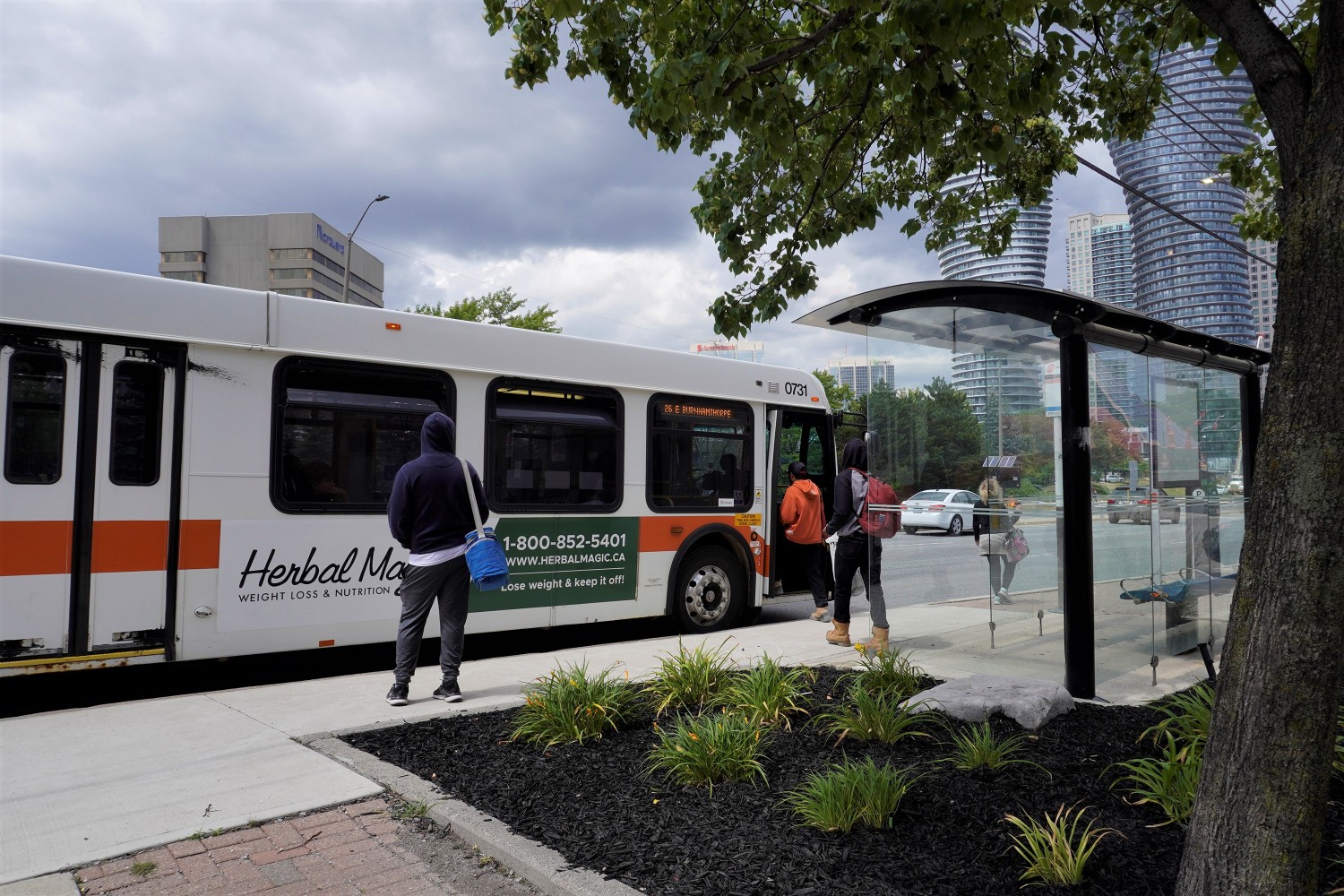 Using public transportation is an individual act that, collectively, is a key to mitigating climate change. Reducing meat consumption, creating less waste and sourcing locally made food, all require the processes around these acts to be as sustainable as possible.

While public transit is much cleaner than the streams of single-occupancy vehicles that criss-cross constantly across the GTA, most city buses still in use throughout the region produce significant greenhouse gas emissions.

Electric vehicle technology, already common in transit systems around the world, is not typical in the bus fleets that move Ontario commuters. 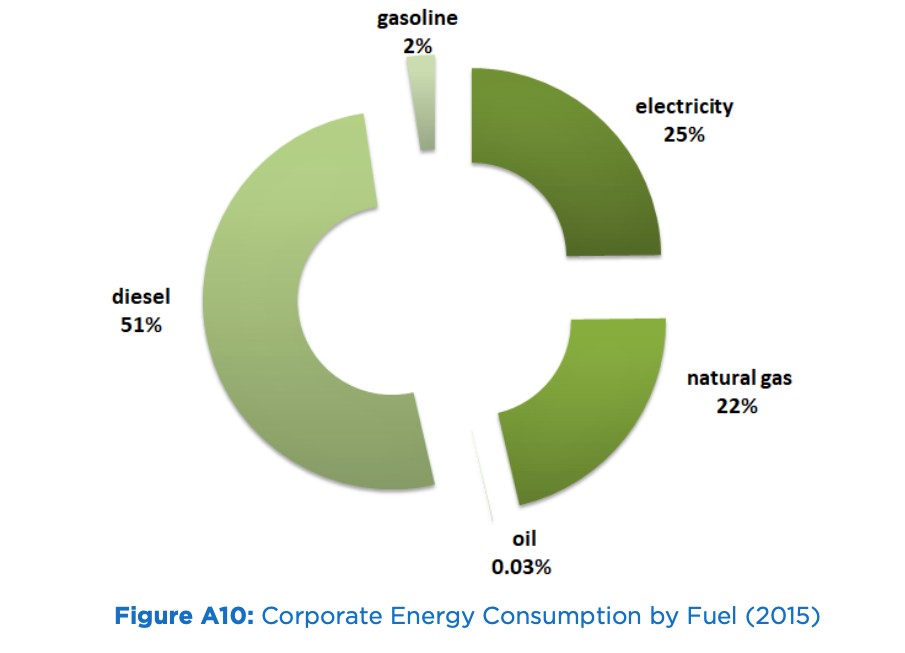 Increasingly expensive diesel is by far the City of Mississauga's largest energy source due to the MiWay bus fleet.

According to the City of Mississauga’s Climate Change Action Plan (CCAP), transit is the largest source of greenhouse gas emissions accounting for nearly 70 percent of emissions from the City’s corporate operations.

In order to meet these targets, MiWay will no longer purchase any conventional diesel buses and will invest in hybrid and zero emission vehicles going forward.

In March, Prime Minister Justin Trudeau announced the Federal and Provincial Governments would be investing nearly $500 million for three key Mississauga transit projects through the Investing in Canada Infrastructure Program (ICIP). The purchase of 314 new hybrid electric buses and the replacement of 44 diesel vehicles will use more than half of the funds. To pay for the new vehicles the City is receiving $142.8 million from Ottawa and another $119.8 million from Queen’s Park.

The historic investment comes as the COVID-19 pandemic changed our way of life. Along with increasingly violent extreme weather events over the past couple of years, highlighting the immediate impact of climate change, these realities have led to a sweeping rethink about how human activity should be organized. 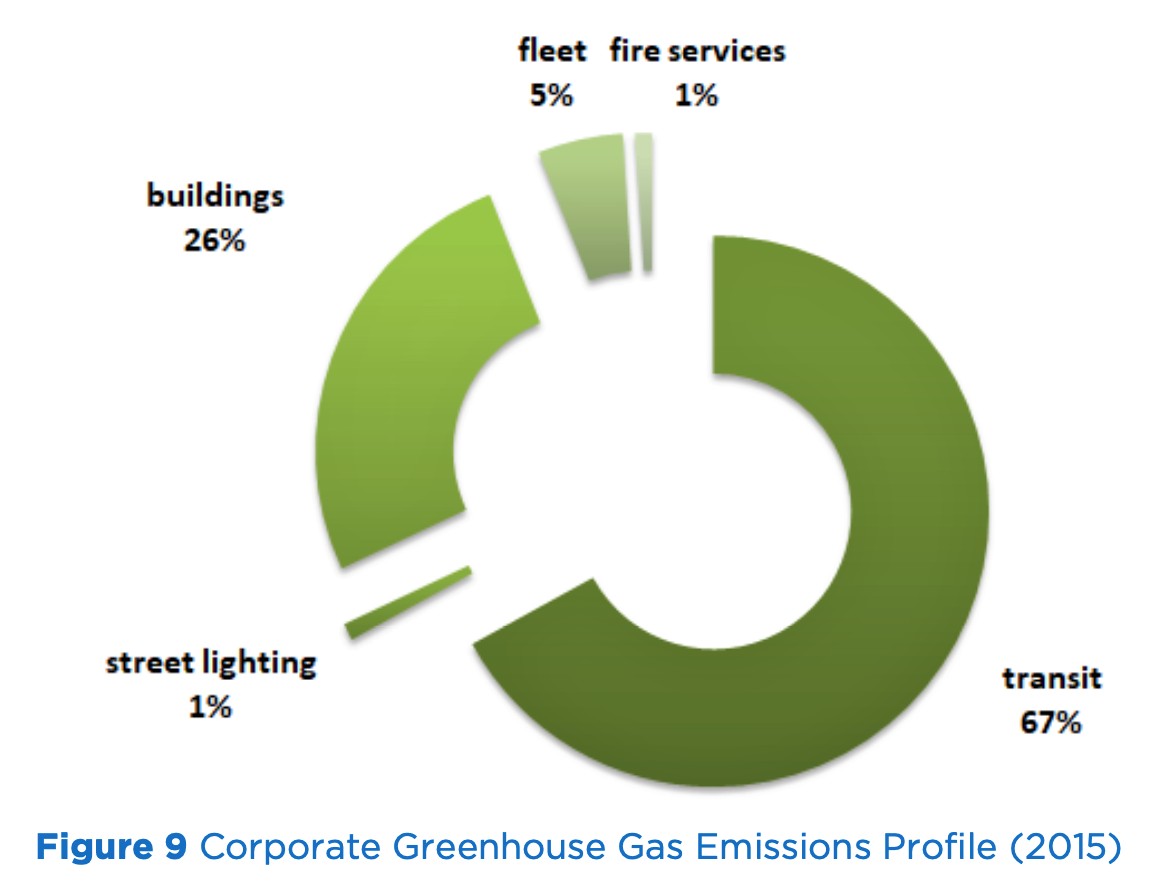 The MiWay operation is the main focus in the City's plan to dramatically reduce its GHG emissions.

For the City of Mississauga, the pandemic increased the urgency to assess on-demand transit and the associated operational strategy. However, there was no funding in the 2022 Capital Budget to operationalize plans to make MiWay more responsive to our current transportation, and sustainability needs.

Earlier in June, the City of Mississauga, working with the University of Toronto’s Transit Analytic Lab, approved a $150,000 budget to conduct an On-Route Charging Feasibility Study and an On-Demand Transit Feasibility Study to curb emissions. The total cost of the two studies is valued at $450,000. The City is receiving the remaining $300,000 from Mitacs (a private company that pursues research partnerships in innovation spaces) and the Natural Sciences and Engineering Research Council of Canada (NSERC).

The On-Route Charging Feasibility Study will confirm if MiWay’s bus fleet at the Edward J. Dowling Transit Facility located on Central Parkway can meet all service requirements if fully converted to electric buses. These buses will be supported by a series of on-route charging stations throughout the city to address space, power supply and building constraints.

The study assumes that minimal charging infrastructure will be located at the main bus garage at Central Parkway and will instead be supported by on-route chargers throughout the City.

“[Y]ou must invest in chargers and electrical infrastructure on the street and/or terminals which is expensive,” the City told The Pointer. 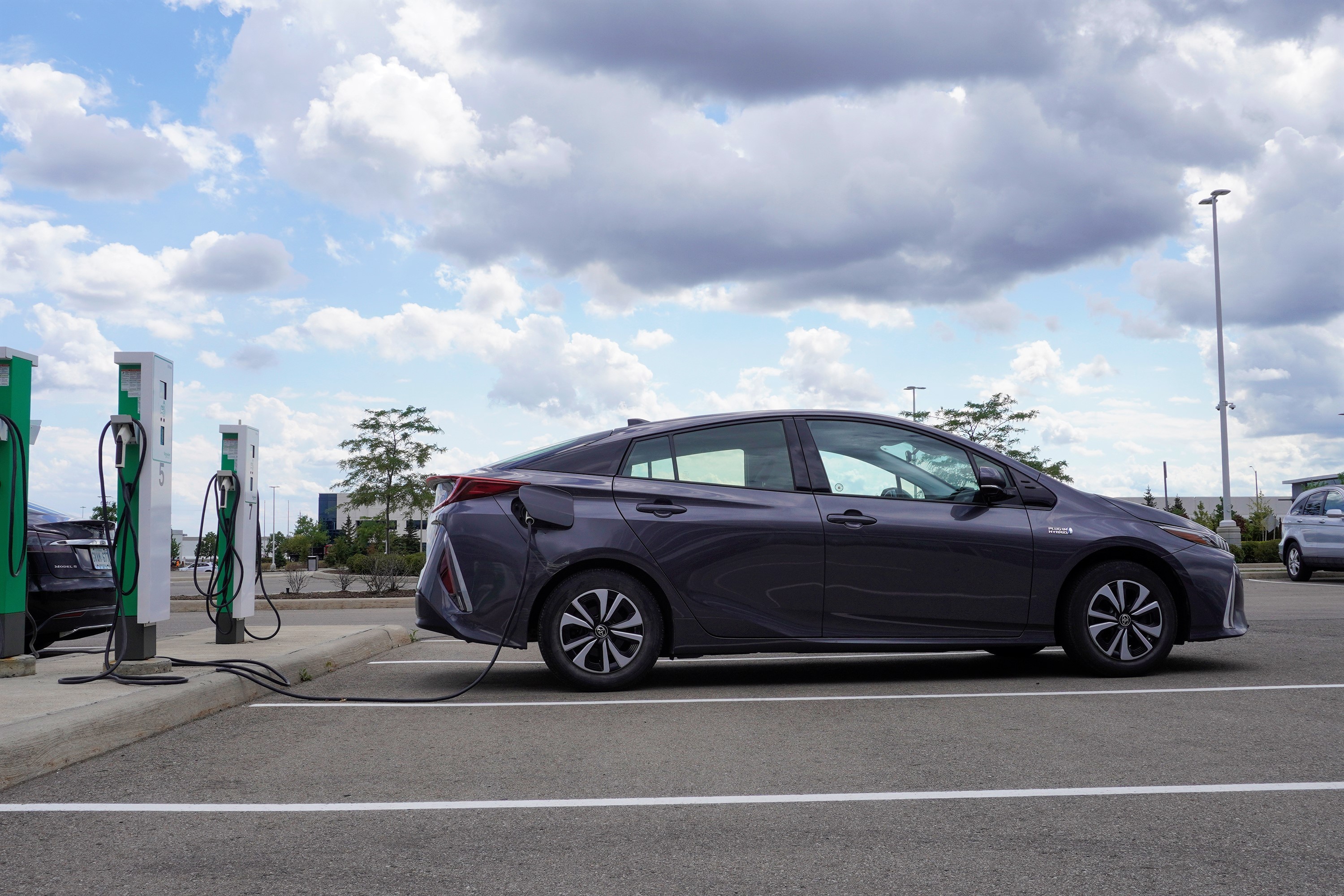 A car charging station along Hurontario Street just north of the 401. As the City of Mississauga decides how to electrify its MiWay system, building green energy infrastructure is a significant challenge to overcome.

The On-Demand Transit Feasibility Study will evaluate the opportunities, costs and benefits for on-demand, round the clock electrified transit in Mississauga.

“This study will be a complete review of the end to end service delivery model that includes integrated trip planning and fare payment, accessible service delivery, infrastructure/capital requirements, and integration with other transit services (neighbouring transit agencies and Metrolinx/GO Transit) within Mississauga,” the report explains.

“The future capability of MiWay’s garages to support zero emissions buses is necessary to ensure that the City’s Climate Change Action Plan targets are achieved by 2050,” the report emphasizes.

Climate activists want immediate action on policies such as electrification but officials warn that the transformation of the fleet from diesel-powered to hybrid to BEBs (battery-powered electric bus) is a lengthy and costly process.

The investment in the study is only one way that Mississauga can work toward its 2030 and 2050 goals. The City has long talked about the slow transformation to a more sustainable bus fleet. Currently, 41 of MiWay’s 507 buses are hybrid-electric. As they near the end of their lifecycle and new technologies become available, they will be replaced with zero-emission buses.

According to the study, this is not enough to cut back Mississauga’s emissions to reach the approved targets.

Even if all buses were hybrid, that still would not be enough to reach the City’s 2030 emissions reduction targets. Hybrid buses are powered by electric motors but they still have a conventional internal combustion engine, though they produce less carbon than standard engines. 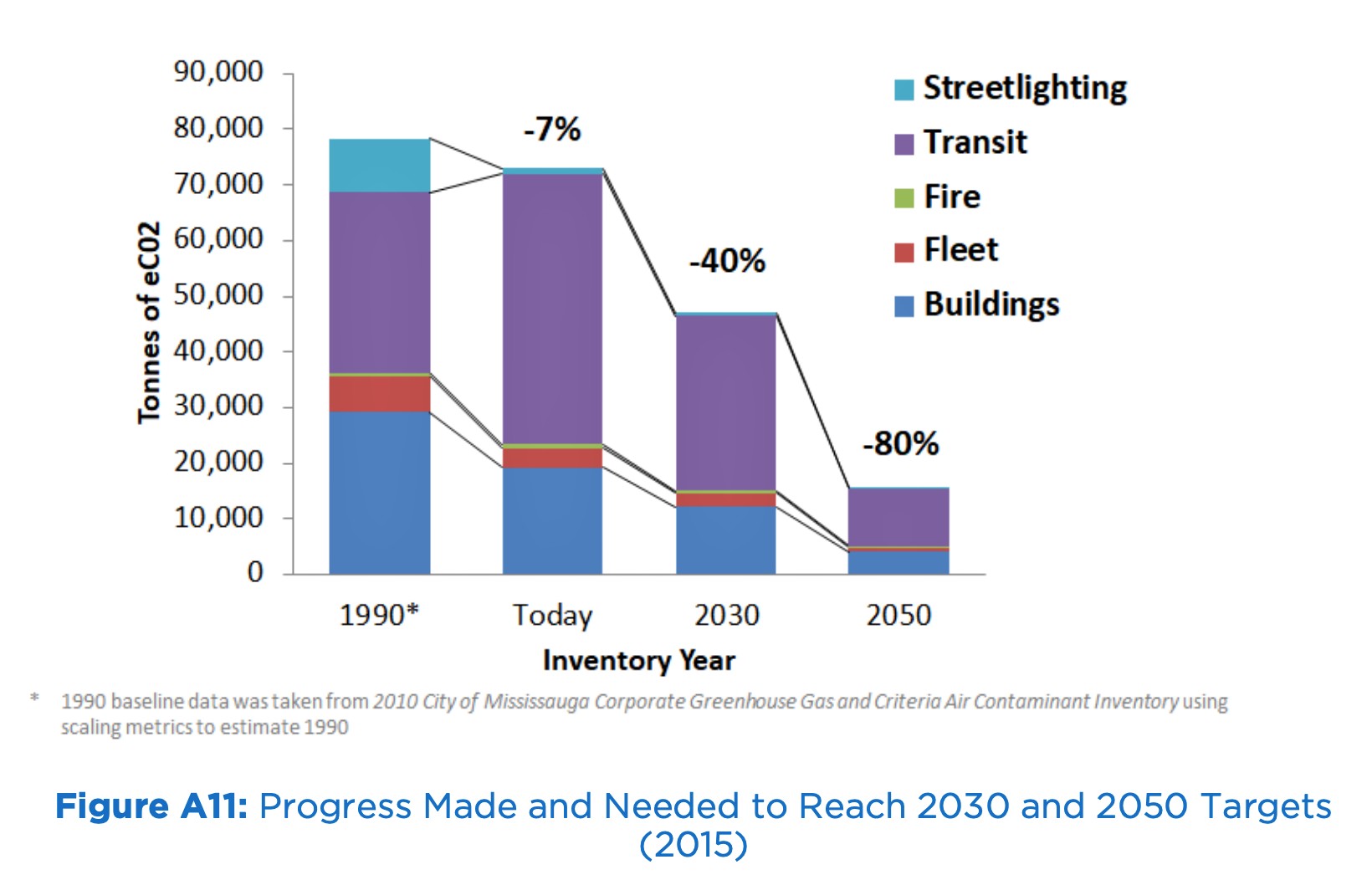 To reach the 2030 and 2050 emission reduction targets, the City will have to switch to BEBs.

In order to curb GHG emissions in Mississauga and meet both the 2030 and 2050 targets, MiWay would need to convert its fleet to BEBs. If the first BEBs are introduced by 2028 and by 2030 the fleet contains 66 BEBs, 369 hybrids and 76 diesels, the 2030 emission reduction targets could be met in 2029, according to a previous report by the City. In addition, 2050 emission reduction targets could be met in 2039 with a fleet of 547 BEBs and 93 hybrids (as the overall size of the transit system grows).

The projected conversion of the entire fleet of buses to BEBs could be completed by 2042, according to the City, depending on funding from all three levels of government.

With nearly 70 percent of the City’s total corporate emissions coming from transit, this would be a huge step toward a greener future for the City.

This green future will come with a significant cost.

A previous analysis by The Pointer found that a total of $197.9 million worth of investment is connected to the City of Mississauga’s plans to mitigate emissions or otherwise adapt to climate change. Of this amount, nearly 80 percent is for transit-related green projects.

Currently, 37 percent of the total capital budget for 2022, which is $476.2 million, is dedicated to transit-related projects.

The most expensive item on the agenda is replacing the fleet’s diesel buses with BEBs. The incremental purchase of the buses will take an early investment of just under $100 million, with future purchases eventually transitioning the fleet to the 547 BEBs that will be needed to meet the emissions reduction targets by 2039. 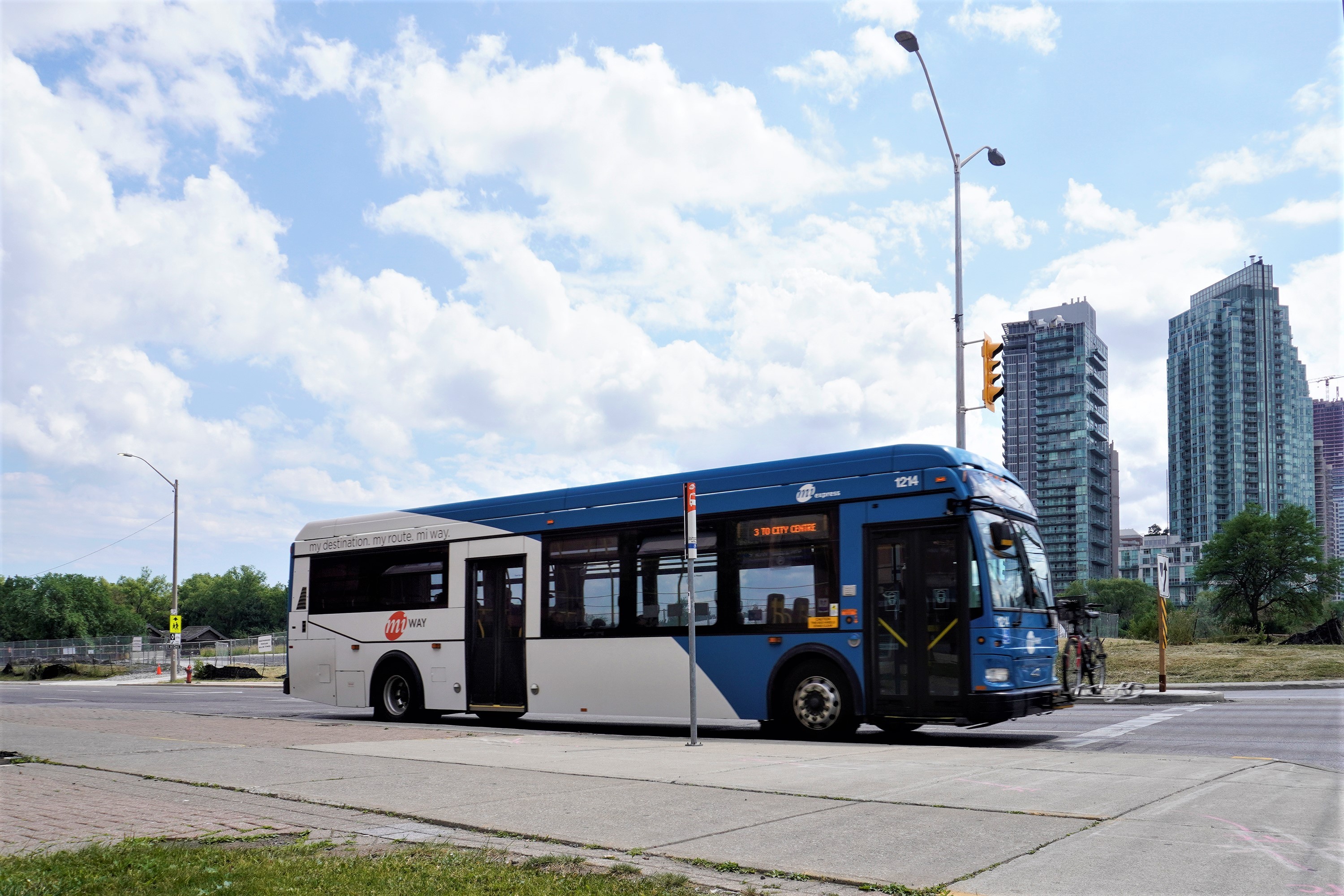 A diesel bus downtown will be an increasingly rare sight as the MiWay fleet transitions from the dirty fuel source to clean, green energy.

A previous report from the City of Mississauga outlined the different BEB technologies that would be available for MiWay to purchase; BEB specifications vary with different battery chemistry and size, carrying capacity and charging capabilities.

“Current limitations to the battery size and external factors such as temperature, weather, terrain, etc., lead to unreliability on the delivery of MiWay’s service plan due to inconsistencies in the distance that could be covered by a BEB,” the report explains. “It is estimated that for every 10 hybrid buses, 13 BEBs will need to be purchased to maintain the existing service delivery capabilities. If additional buses are not purchased, MiWay will need to substantially change how the buses are scheduled.”

The first step in the transition to BEBs is determining the infrastructure that will be necessary to support the fleet.

One of the options for the City of Mississauga is on-route charging which would allow BEBs with a smaller battery that has to be charged before and after each trip. Charging takes between three and seven minutes to complete.

The need to be charged more frequently is a limitation of the technology.

“Once a line up starts you cannot clear it unless you have more chargers which are expensive and take up space.  This becomes more complex when you have a terminal with multiple routes with different frequencies,” the City said.

Whatever the City decides, continuing to use diesel isn’t an option.