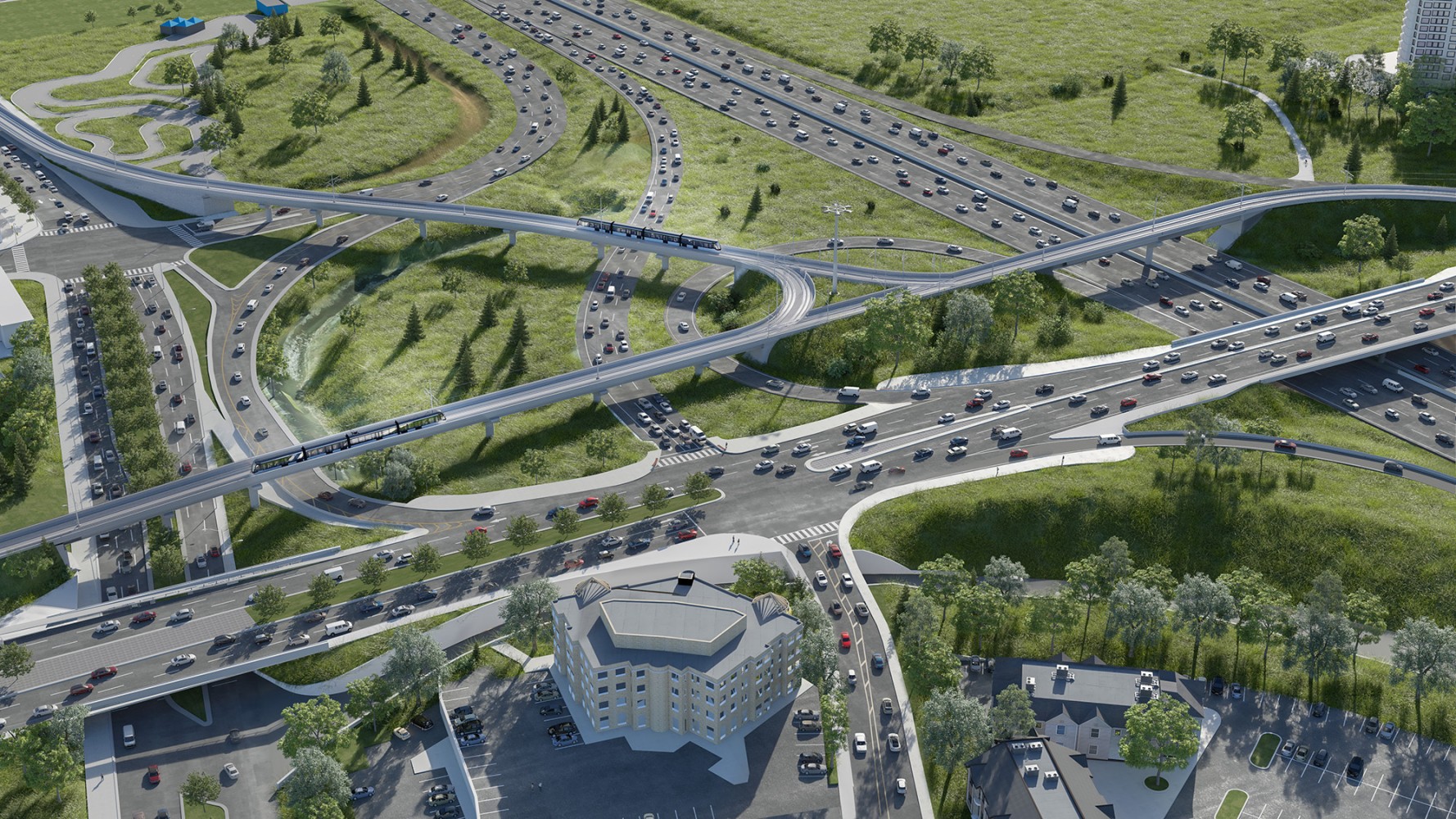 Mississauga’s budget for 2022 is the clearest sign yet that the City is committed to residents who want to ditch the car.

That might be a routine refrain in places around the world that were never designed for the automobile in the first place, but in Canada’s sixth largest city, where the car has always been king, the financial blueprint approved by council this week shows future planning will revolve around transit, not the suburban sprawl of the past.

With MiWay ridership plummeting due to COVID-19 — only returning to about 60 percent of pre-pandemic ridership levels as of September — it would have been easy for councillors to press the pause button on new transit investments in the city.

And while no new services will be added in 2022, the largest chunk of capital funding is being allocated to a number of high-order transit projects, many of which, once completed, will drastically improve connectivity around Mississauga and to the entire GTA.

The City is taking bold steps toward creating a more expansive, accessible green transit system in 2022 — investing $177.2 million into a number of projects, the largest chunk of capital funding being given to any City department. Plans for bus rapid transit (BRT) and light rail transit (LRT) systems are more prominent than ever in the coming year’s budget compared to those in the past.

Mississauga council members  approved the budget on Wednesday, December 8, with little discussion, following a trio of previous budget committee meetings. The budget sees a 4.3 percent increase on the City’s share of residents' property tax bill (when blended with the Region’s portion and the Province’s education share, staff estimate an overall 1.5 percent tax increase on residential properties and a 1 percent increase for businesses).

Ahead of the budget’s final approval, Mississauga Tourism was handed an additional three full-time staff members to help recover from pandemic closures. The last minute adjustment does not impact the final tax increase.

With significant development occurring in key areas of Mississauga, which will bring tens of thousands of new residents to large-scale residential/commercial developments along the lakeshore, Cooksville, the city-centre area, and a number of other intensifying urban corridors, making it easier and more sustainable to get around is a key priority for City Hall.

Ensuring residents and employees can move around easily and in an environmentally friendly way is critical to mitigate the impacts of climate change and meet Mississauga’s carbon emission reduction targets.

A significant contributor to this green transit future will be the expansion of high-order transit. This includes projects such as the Hurontario LRT, Dundas BRT and Lakeshore BRT. These strategic investments are planned around areas of high growth being developed in the next decade and will provide residents with better connectivity to GO Transit systems and those run by nearby municipalities.

About $6 million will be invested in the Hurontario LRT in 2022. According to Mobilinx, the consortium behind the work, the project is on track for a 2024 launch, with construction crews working day and night to meet the tight timeline. 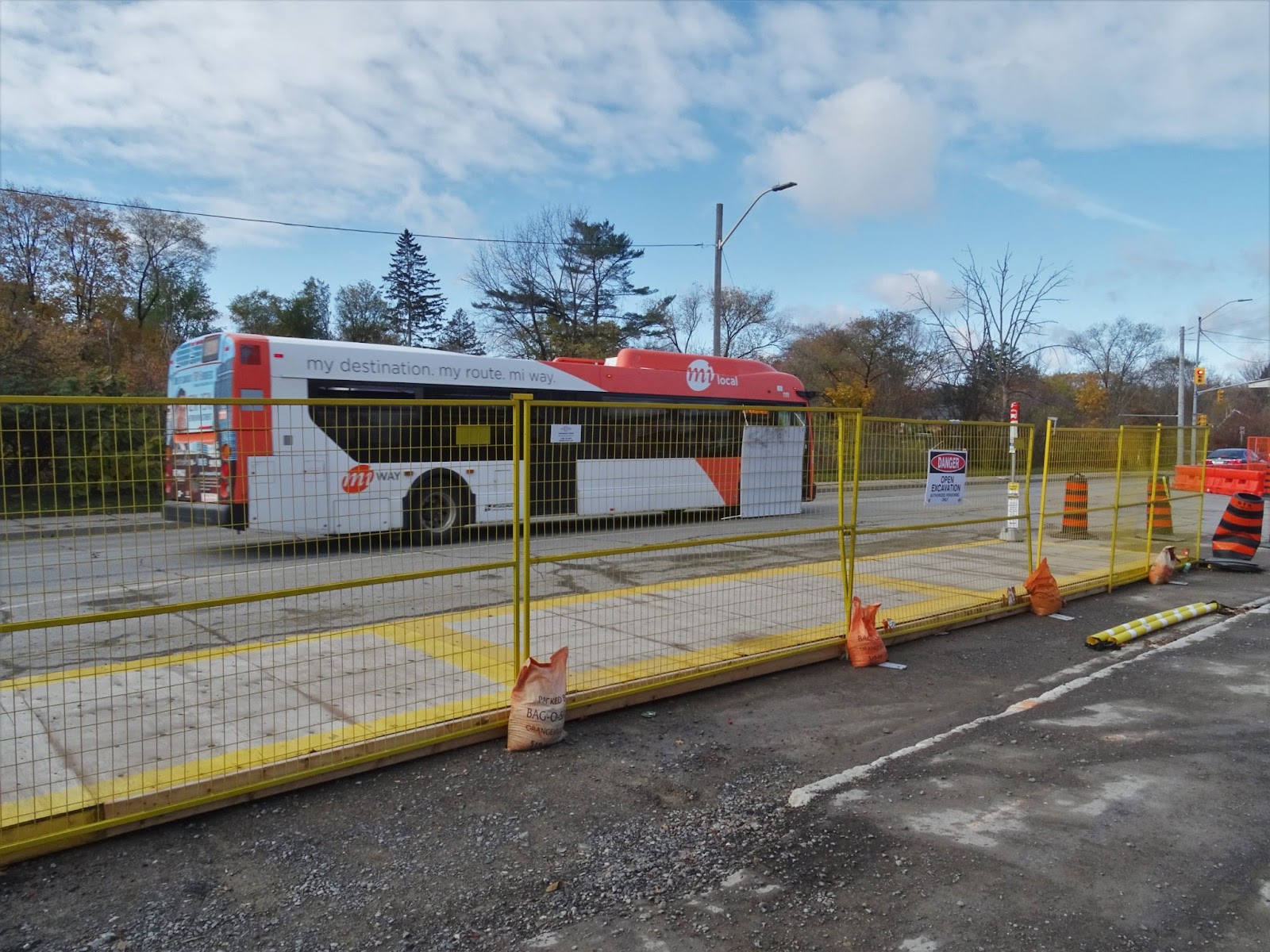 Construction is ongoing on the Hurontario LRT, set to be operational in 2024.

The massive project — which will span the 18-kilometres between Port Credit GO Station and the Brampton Gateway Terminal at Steeles Avenue — is being constructed from both directions, making Hurontario Street a place to avoid during rush hour. The north/south line will offer direct access to the lakefront, city centre and northern neighbourhoods of Mississauga. When complete, it will run from Lakeshore Road to two other GO transit lines crossing east and west, giving riders access to travel in every direction, with MiWay connections also spreading east and west from the Hurontario LRT spine.

The Lakeshore BRT system is mentioned multiple times throughout the 2022 budget document, billed as a prominent upcoming feature for the city’s lakefront community. A sum of $1 million is going toward a Transit Project Assessment Process (TPAP), an environmental assessment involving a variety of studies, including geological analysis and surveys of current traffic levels. The two phases of the TPAP will be funded in 2022.

To make many of its high-order transit dreams a reality, Mississauga will be relying on upper levels of government for support.

At the beginning of 2021, Mississauga welcomed investments from the federal and provincial governments through the Investing in Canada Infrastructure Plan (ICIP). The $113.5 million joint funding will assist the City in financing 12 projects, most notably the Lakeshore Road BRT. 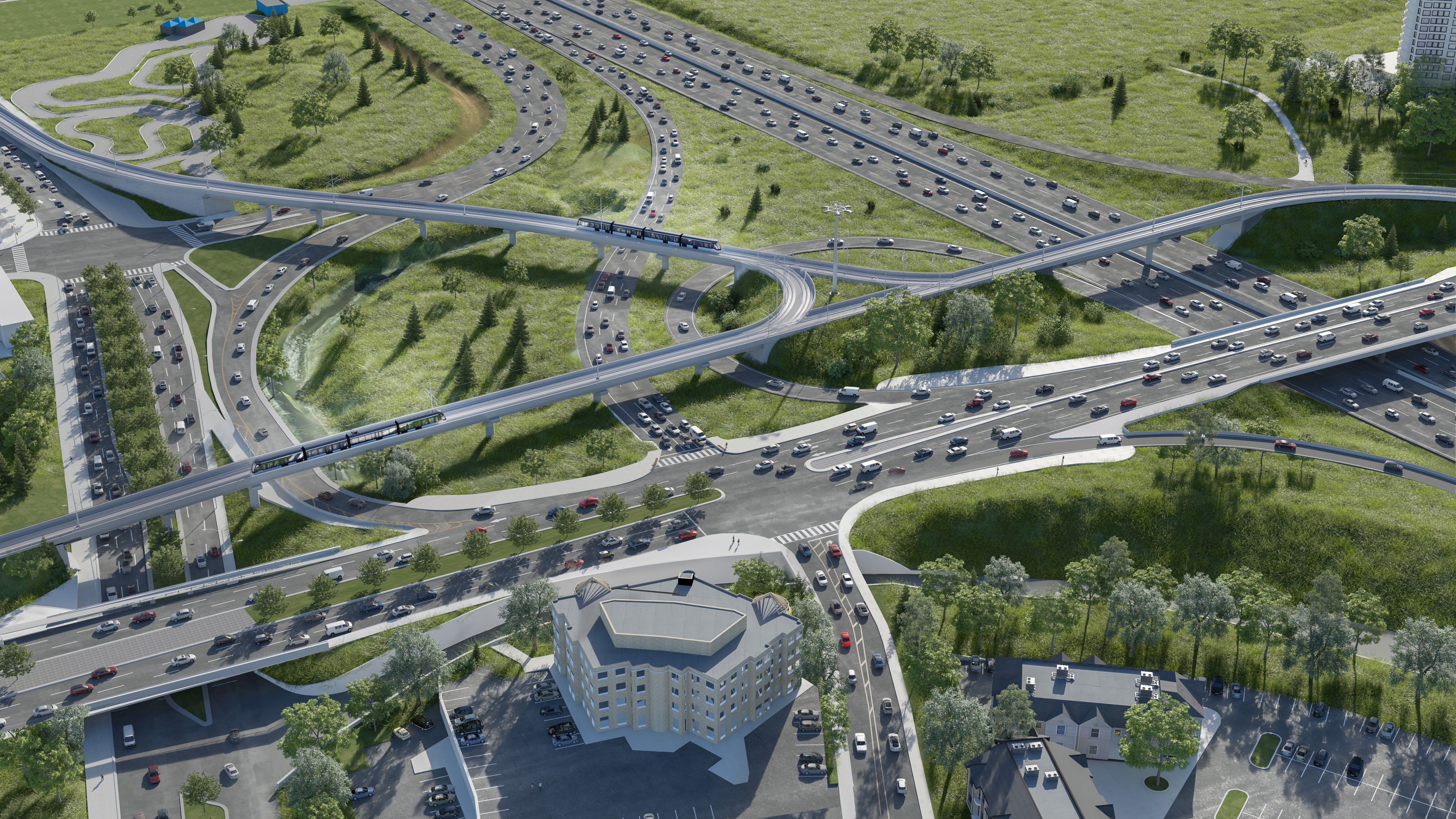 A rendering of an elevated section of the Hurontario LRT.

Despite the good news, it is only a fraction of the total $847.5 million in assistance the City had applied for, which included 17 different requests to grow Canada’s sixth largest city. Money to replace and green an aging bus fleet made up 42 percent of the overall request, while the Dundas Street BRT accounted for 36 percent.

But Ottawa only committed funding for 18 percent of the needs laid out by the rapidly growing city, with no concrete answer on funding for the Dundas BRT. The two BRT corridors are key to future urban growth plans, but the Lakeshore route is considerably smaller with a length of two kilometers and only three stops, while the Dundas BRT will travel across the entire east-west width of the city, connecting with Toronto on one side and Oakville on the other.

The 2022 budget proposes $2.8 million for the design and construction of the Lakeshore BRT lanes from Deta Road to East Avenue.

For the Dundas Street BRT arterial road corridor, the 2022 budget invests $43.5 million toward the project, with the bulk of the approved funds for the design and construction from Confederation Parkway to Etobicoke.

In July 2020, councillors voted to enter a cost-sharing agreement with Metrolinx to assist the city in starting the initial steps. The deal with Metrolinx does not impact the ICIP application to Ottawa, instead it offers Mississauga a cost-saving on the work required before shovels enter the ground. Only planning work will take place in partnership with the provincial transit agency.

Initially the City was expecting to sink $11 million into the planning of the BRT. Instead, with the deal from Metrolinx, the costs are split almost 50 percent, leaving the city to pay around $5.5 million. 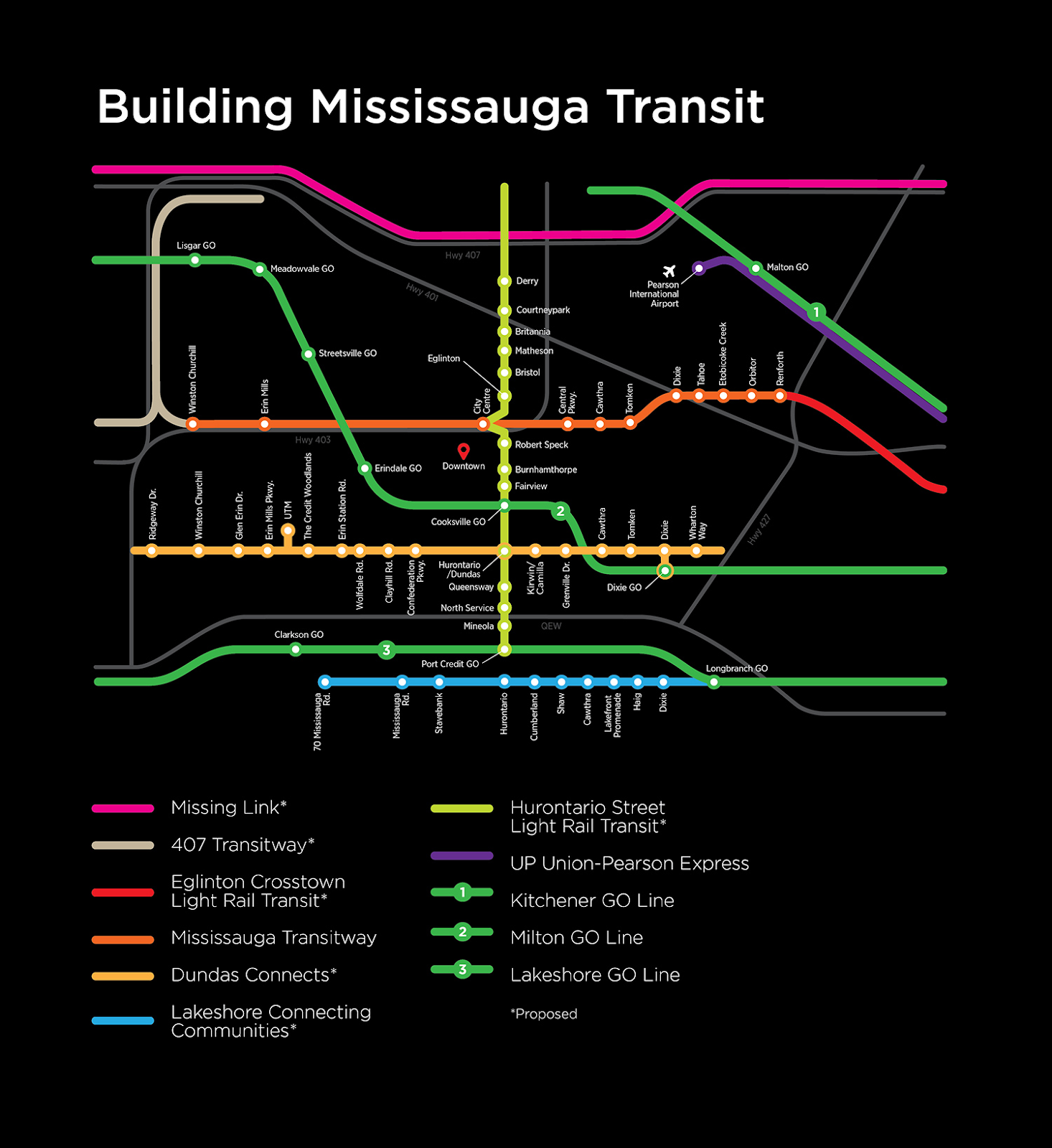 Mississauga dreams of hosting a connected transit system, one that will entice car owners to ditch their vehicles.

The rest of the MiWay budget consists of repairs to washrooms, bus loops and on-street signage for the upcoming LRT and stops. A large investment into the Central Parkway transit station will include a bus loop and washroom for $3 million in 2022.

The transit network is hoping to bring riders back before taking the next step of increasing current service hours. Like this past year, hours will stay the same along with fare prices. Before the pandemic, ridership revenue had grown a healthy four percent between 2016 and 2018, a positive trend that showed the potential of continued investment in the City’s growing transit system. According to Mississauga’s 10-year capital plan, an investment of over $1 billion is required for transit alone between now and 2031, approximately 26 percent of the City’s overall capital spending.

After two years with lockdowns off and on, the system lost $40 million in revenue. MiWay projections show this decline will not last, with sustained revenue gains predicted over the next 5 years. But as of September, the system was only at 61 percent capacity based on pre-pandemic levels. No one knows for certain how long it will take for all regular and infrequent transit users to feel comfortable getting back on a bus. 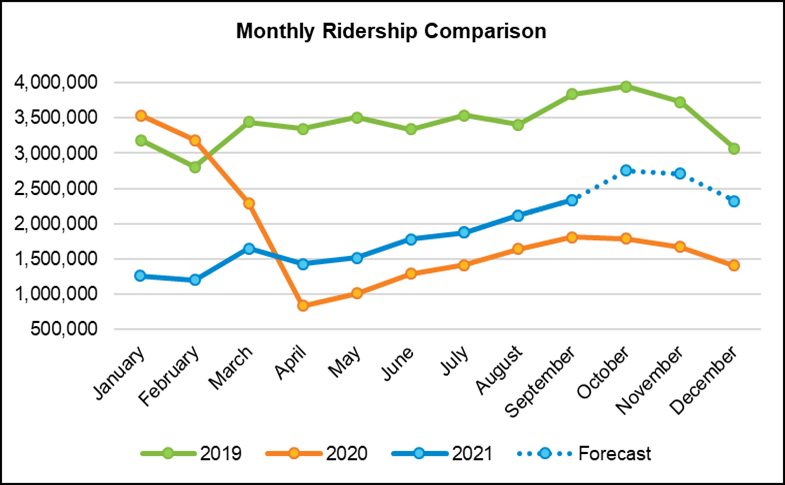 At peak times, the transit system could welcome almost 4 million riders in a month.

MiWay is going to be spending $108.8 million on bus maintenance and new hybrid buses in 2022, along with more minor repairs to fare boxes. Just under $100 million will go toward replacing retired diesel buses with hybrid technology. The overall budget is increasing $5.2 million over 2021, mostly due to labour and diesel costs.

By the end of 2021 the fleet will consist of 507 buses, 41 of which will be hybrid-electric and the remaining 466 buses will be powered with cleaner diesel. This crucial investment will help the city get closer to reaching its carbon emissions targets, as the transit system accounted  for about two-thirds of Mississauga's corporate emissions in 2020.

Transit projects as multifaceted and expensive as MiWay’s require funding and planning for more than one year. The 2022 to 2031 capital projects list includes plans for upcoming projects to be funded at a later date. The two BRT systems have funding trickling down until 2027 for a planned 443.2 million investment in about a half decade.

The other key green initiative includes the replacement of buses to switch over to sustainable technologies, which will cost $438.6 million by 2031, as MiWay looks to move away from diesel vehicles.

These are signs that a city built for the car could become the poster child for municipalities committed to funding a cleaner urban landscape.