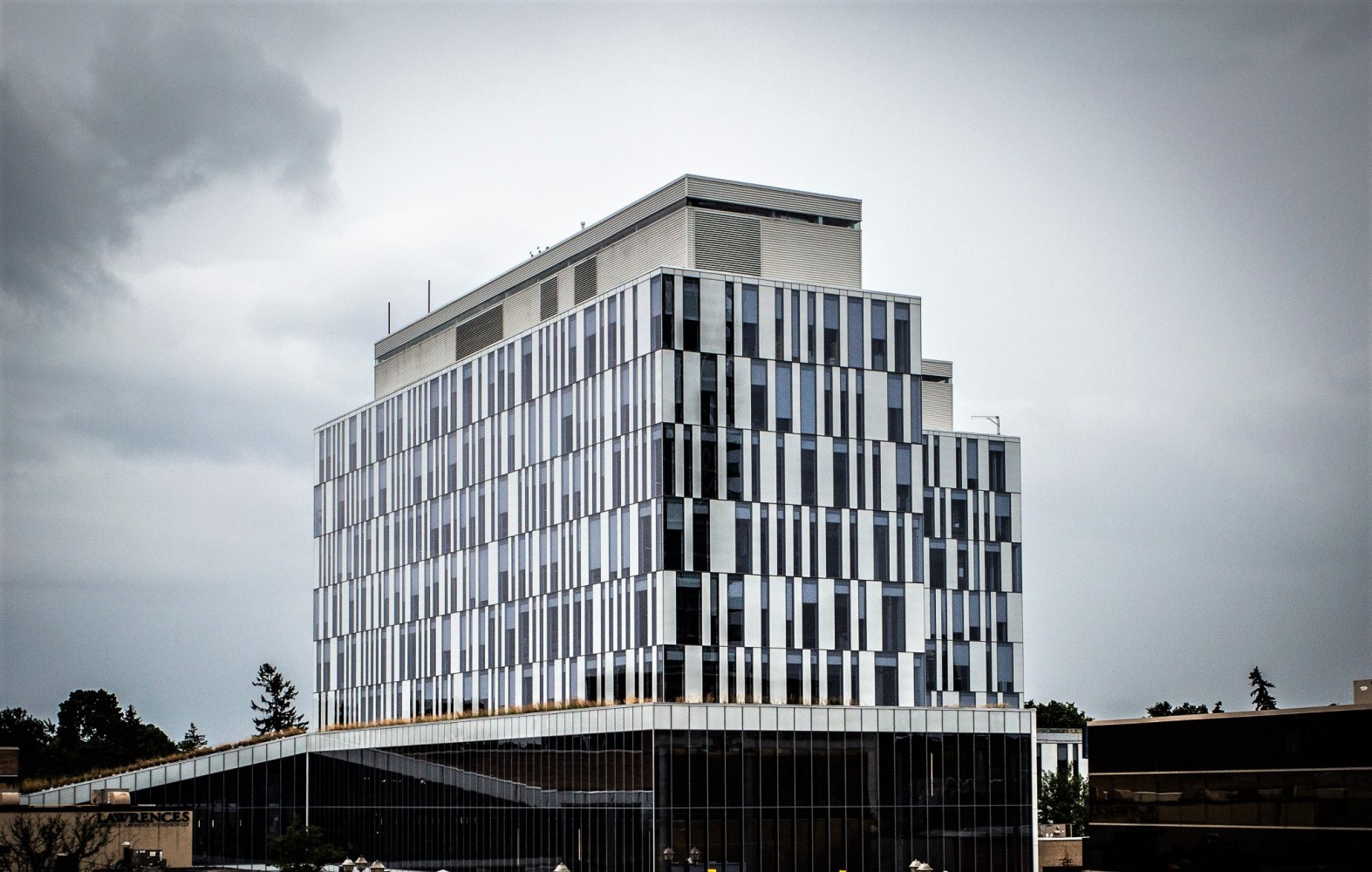 Photo from The Pointer files

Brampton Mayor Patrick Brown often claims he wants to leave a better world for future generations. He has repeatedly pledged his support for environmental actions while simultaneously supporting destructive initiatives such as the proposed 413 Highway, which he bragged about putting on the PC Party platform as leader in 2018.

“We want to protect these environmental jewels for future generations of Bramptonians to enjoy,” he tweeted in 2019, after Brampton City Council passed a resolution to clean up local bodies of water like Heart Lake and Professor’s Lake. As the leader of the Progressive Conservative Party in April 2016, he echoed the sentiment. “We owe it to future generations to take action,” he said in a statement on World Earth Day.

“When I was the opposition leader at Queen’s Park, I put [the highway] in the platform. I personally put it in the platform,” he bragged in 2019 while aggressively pushing the environmentally disastrous 413 Highway proposal.

His contradictions about caring for future generations extends to budgeting.

The proposal for the City of Brampton’s latest financial blueprint, released this week, looks set to heap debt on future generations living in the city in pursuit of short-term popularity. Brown will be a key voice shaping the budget when council begins its deliberations at the end of November.

The mayor has proudly presided over three consecutive budgets which he claims offered relief to property owners through a tax freeze. But sharp increases to a range of costs, including utilities, certain user fees or licencing and registration charges, on top of increased costs for debt that Brown has used to make up for the shortfalls, have continued despite his claims.

His claim is also misleading because many residents who saw the assessed value of their property increase, had to pay more in property taxes under Brown.

What his revenue freezes have done is choke off the money required for desperately needed infrastructure. Brown’s sleight of hand has left City Hall’s finances straining under growing pressure. It has also spawned an increasingly complicated shell game of project delays and raiding rainy-day funds, while staff rely heavily on debt to finance future projects. Debt that will cost taxpayers even more money to pay for basic needs, all so Brown can claim on the campaign trail that he managed taxes responsibly, while he continues to do the opposite.

To achieve a fourth tax freeze, Brown and the rest of council will need to reduce the 2022 budget from its current state. The document already threatens future Bramptonians with unmanageable debts and tax pressures. It includes an increase of 2.8 percent for the City’s portion, year-on-year, and leans on debt funding.

CAO David Barrick, responsible for the entire City operation, had not run any municipal department, let alone a city even close to the size of Brampton, before he was handpicked by Brown in 2019 to be the City’s top civil servant.

The numbers in the proposed budget document presented by the controversial CAO, who arrived from Niagara after being fired from that region’s conservation agency and his involvement in a major scandal there, do not suggest a well-run city. 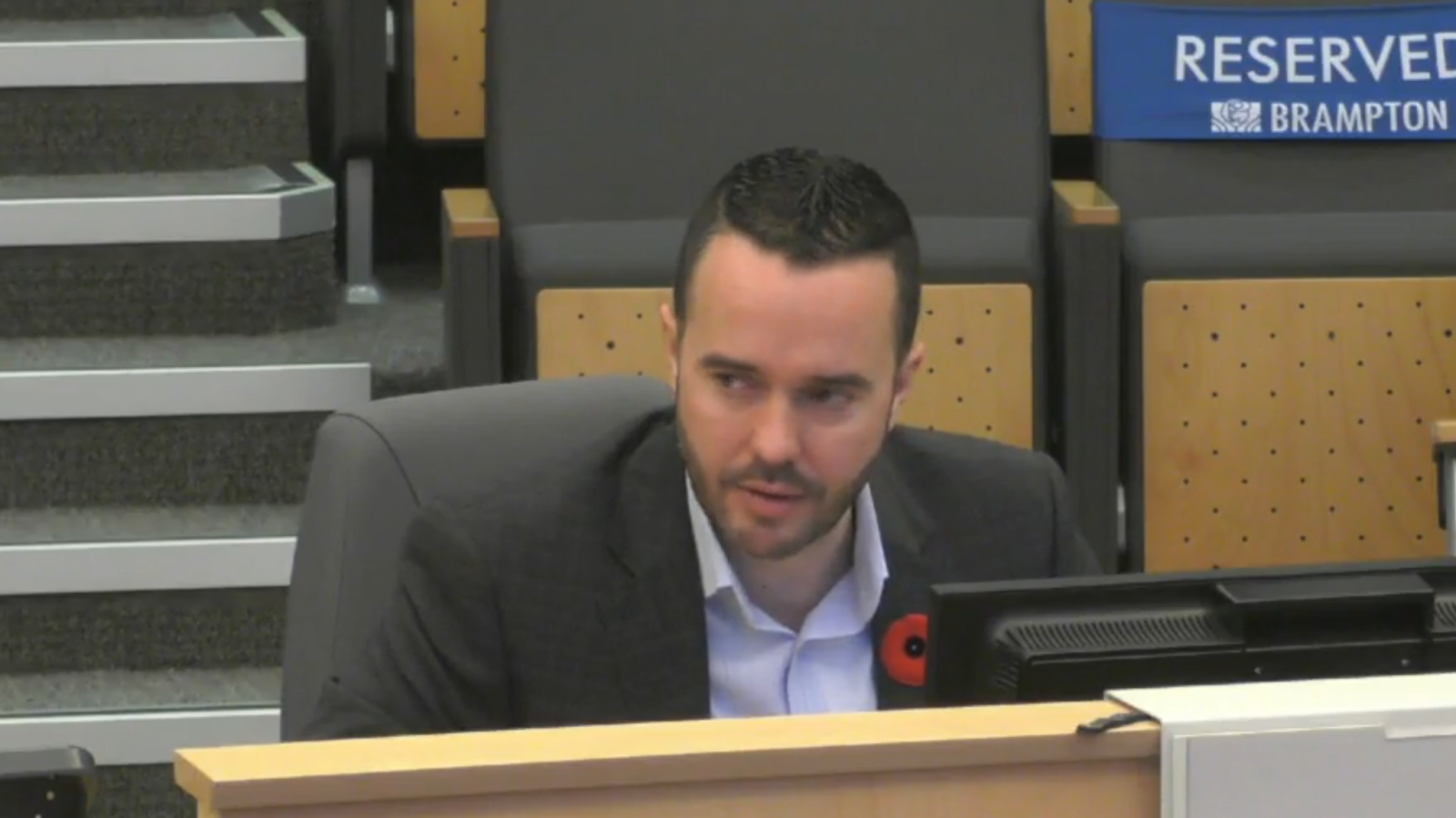 David Barrick, Brampton’s CAO, was implicated in the Niagara “Inside Job” scandal.

(Screenshot from City of Brampton video)

The COVID-19 pandemic is a perfect microcosm of Brampton’s chaotic budgeting.

During the 2021 process a year ago, Barrick and his staff suggested the pandemic was not an important consideration when preparing the financial blueprint that should underpin all spending decisions for an entire year. “We did not budget for the emergency. We did not budget municipally as we didn’t for 2020… instead we’ll be focusing on our tax impacts,” he told councillors last year.

In June, when the predictable financial cracks began to show, as almost all other Canadian cities big and small had accounted for, staff led by Barrick, a former Port Colborne councillor with no finance experience, did a U-turn. After ignoring the obvious impacts for more than a year, a staff report claimed the pandemic was the reason for the “considerable economic uncertainty and challenges facing residents and businesses, as a result of COVID-19.”

But once again, Barrick has flip-flopped, claiming increased revenue from taxes are not needed to deal with impacts of the pandemic.

“As in 2021, the Proposed Budget does not include an increase in property taxes to address the impacts of the pandemic,” the 2022 budget states. “The City will be utilizing funds received from other levels of government and, where necessary, our financial strength through stabilization reserves to weather the storm.”

Stabilization reserves are not meant to offer a tax freeze so a politician can use it as an election slogan. They are meant to keep above-inflation increases in check, but Brown is raiding rainy-day accounts while simultaneously taking on more debt and cancelling a number of badly needed local infrastructure projects.

Future generations will be crippled by skyrocketing taxes to replenish the depleted reserves, cover all the debt financing and pay for all the cancelled and postponed infrastructure work.

What Brown’s handpicked CAO is doing is the equivalent of a company telling shareholders that costs needed to pay for operations will come from its dwindling bank accounts and borrowing, despite falling profits due to the inability to generate extra revenues that should pay for higher operating costs.

A smart shareholder would see this as a sign to sell.

A reliance on reserve funds is key to Brown’s short-sighted strategy.

The budget repeatedly touts “significant contributions” to reserve funds as a success. These accounts, the document admits, are also referred to as “rainy day” or “contingency” funds, designed to bail the City out when unexpected costs arise, such as damage to City property as a result of severe weather events, which are occurring more and more often due to climate change.

Brown chooses to ignore this.

Under Barrick, Brampton is using the funds as a piggy bank for a range of different spending needs. Instead of carefully budgeting the City’s needs line-by-line at the start of each year, staff are spontaneously using reserves with little regard for the future and a less robust public process for the approval of funding provided previously by taxpayers, funds that are not supposed to be used the way Brown and Barrick are using them.

Brampton residents can look south to Mississauga, where taxpayers are paying dearly for decades of financial neglect as former mayor Hazel McCallion demanded tax freezes for decades, to win popularity. Current property owners are now paying the price of her fame.

Brown and Barrick are setting out plans to raid the City’s rainy day funds. The proposed 2022 budget includes projects to be funded by reserves.

A series of reserves funded by the tax base illustrate how resources are being drained. Five separate accounts exist to manage various broad City commitments: asset replacement, joint use of facilities, stormwater, theatre improvements and transit. At the end of 2019, the reserves had a combined total of $33.7 million available, with the majority in the asset replacement fund. At the end of 2021, the total balance of the funds will sit at just $108,000, leaving next to no money to cover future needs.

The 2022 budget proposes to make some minor contributions to boost these empty accounts. It will increase the asset replacement fund by $78.6 million (the fund is projected to end the year with $14.4 million in the red) and $12.3 million will be put into the transit levy reserve, projected to end this year with a deficit of $1.2 million. The City budgeted similar contributions to both reserve funds last year, but they will still end this year completely empty.

These teetering reserve funds are compounded by a plan inside City Hall to increase the level of debt future taxpayers must fund. A series of major projects promised by City Hall and Brown will be funded with money the City doesn’t actually have.

Brampton plans to pay for almost seven percent of its $328 million capital budget through debt that will need to be repaid in years to come.

Before staff even began to write the current budget proposal, the City had borrowed $327 million to fund projects that include the City Hall West Tower expansion ($125 million), a new transit storage and maintenance facility ($60 million) and a centre for innovation ($99 million). According to the budget document, the current repayment sits at $11.1 million per year, a figure that will increase 123 percent by 2025 to $24.8 million, based on the City’s current borrowing plans. 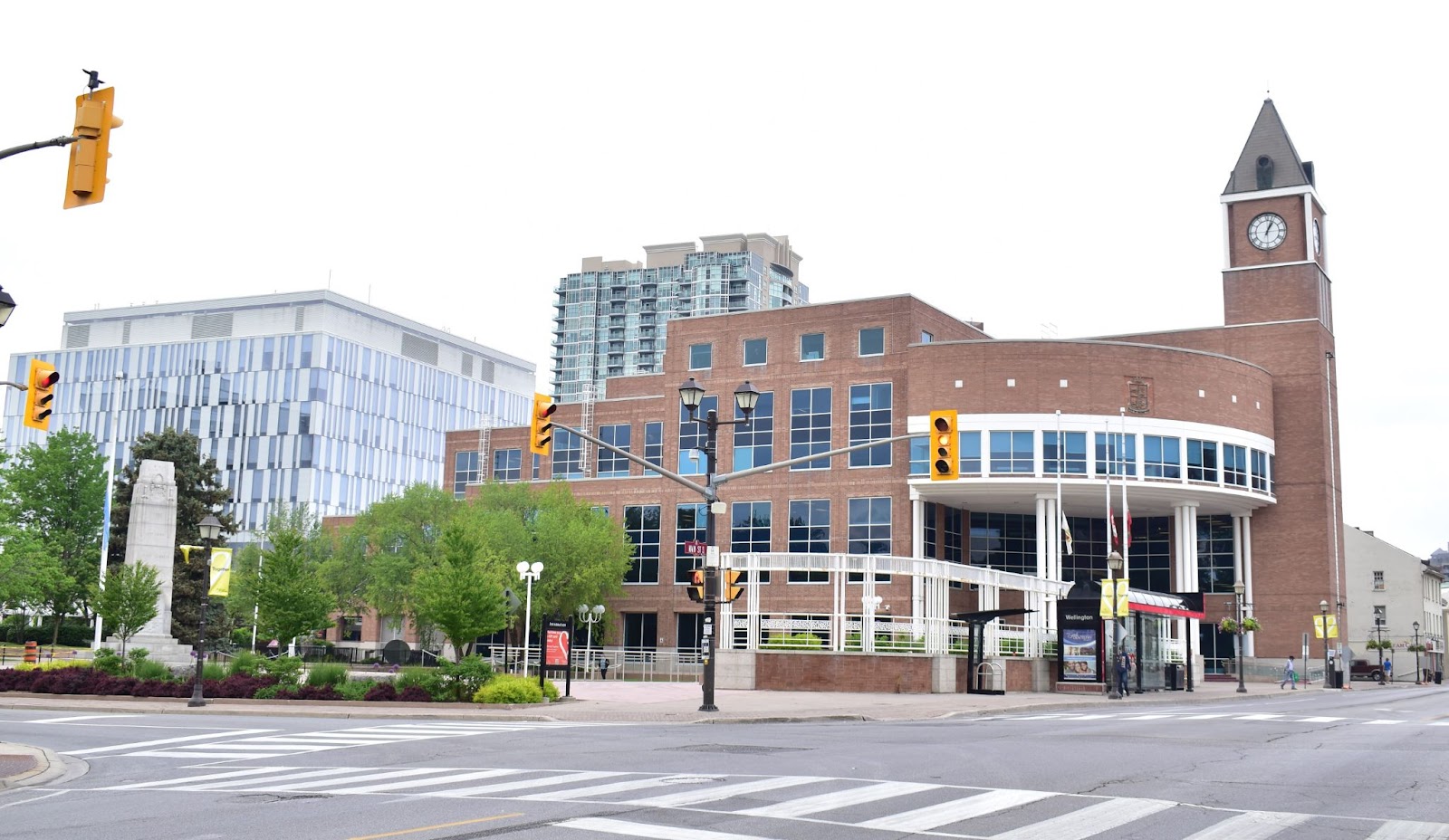 The City of Brampton West Tower (left) was debt-funded.

The actual tax-revenue contribution to the capital budget has dropped in tandem. It sat at $91 million (largely for the public works department) in 2021, while the number is just $67.5 million in 2022.

The budget’s biggest new debt commitment will be $11.2 million next year to pay for improvements to Brampton’s downtown. The plan was recently adopted by council and focuses on a partial revitalization of the area around City Hall. It will widen some sidewalks by three metres on Main Street and Queen Street and replace the surface with stone pavers at a four-year cost of $16.6 million.

It’s a far cry from the comprehensive Downtown Revitalization plan Brown cancelled immediately after his election, following his promise to freeze taxes.

The debt will allow Brown to kick the can down the road, when future elected officials will have to account for the money. Repayments for the downtown work will begin at $210,000 in 2023, increasing significantly year-on-year.

Despite the hefty borrowing against Brampton’s future, confusing reserve funds and a proposed budget increase of 2.8 percent to Brampton’s share, the City’s capital plans are in tatters.

Last year, the budget’s three-year rolling capital plan suggested the 2022 capital budget would sit at $393 million, including $266 million for the public works and engineering department. The latest blueprint has slashed that earlier projection by $65 million to $328 million, a significant portion of which is being funded through debt.

The document punts $37 million of those capital costs to the 2023 budget.

At the end of the month, on November 29, councillors will sit down to consider the budget document. On top of the standard difficulties Brampton faces, they will be considering whether to collect extra funds to expand Peel Memorial Centre for Integrated Health and Wellness, as well as pressure to fund a $35 million cricket stadium, funds that are not included in the proposed 2022 budget despite Brown’s previous election promise to get it built this term of office.

Other unfunded projects include the Riverwalk, the downtown LRT and the university Brown has promised, all of which will cost hundreds of millions of dollars.

Meanwhile, an alarming report came before council in September, revealing that Barrick has lost track of more than a billion dollars worth of approved capital projects, meaning despite council direction to get the needed work done, the money is “not yet committed or spent”.

As the City’s budget descends further into financial mismanagement under an unqualified CAO selected by Brown, hanging over the entire process is a municipal election that is now less than one year away.

Council members will have to decide between moves to protect their political careers or protecting their city for future generations.