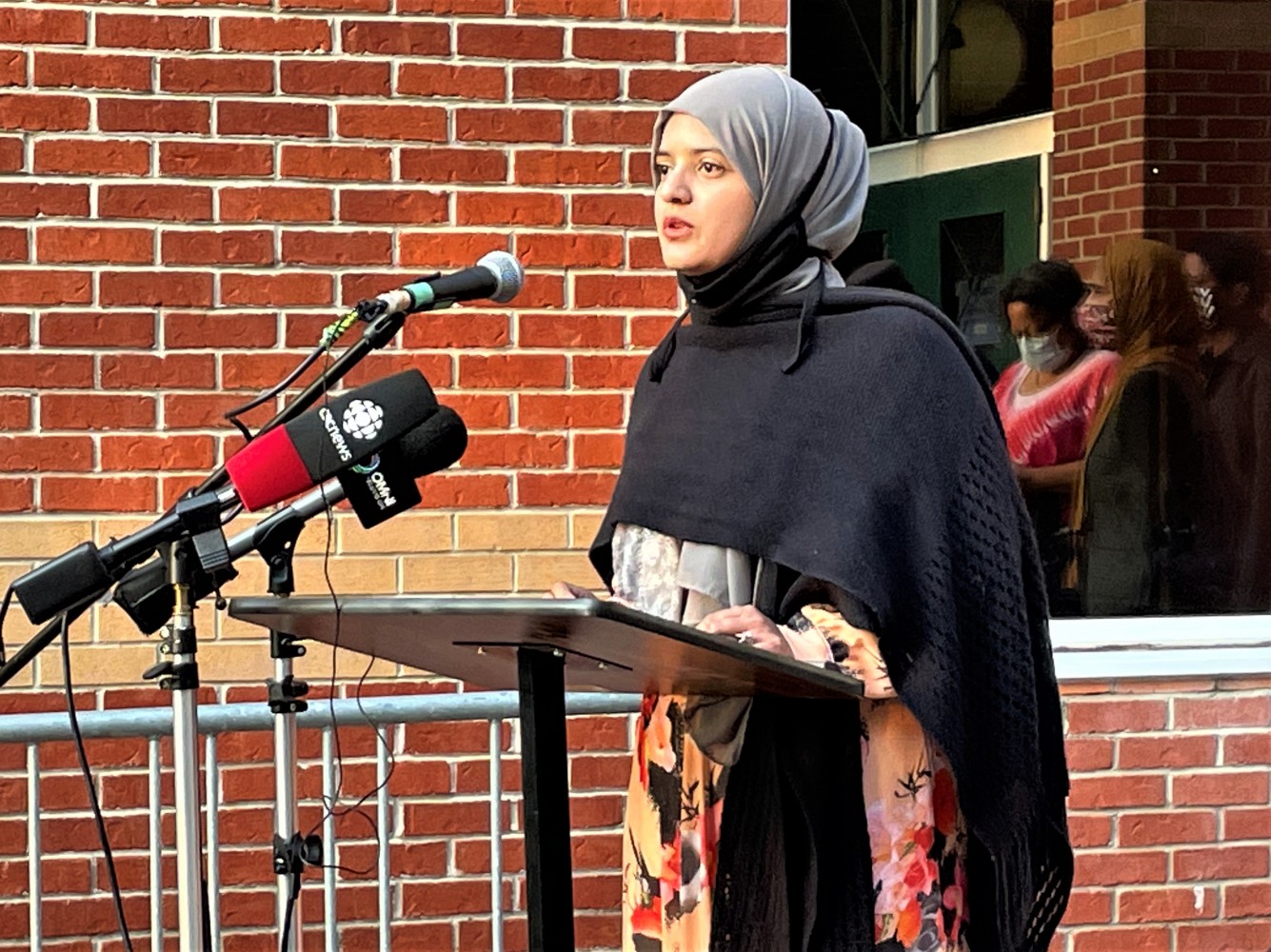 Ibrahim Hindy, chairman of the Muslim Council of Peel and an Imam at Dar Al-Tawheed Islamic Centre in Mississauga, took to the podium Thursday outside the headquarters of the Peel District School Board and shared a heartfelt story.

“I remember a young high school student in Peel, who grew up right down the street from me. His mother told my mother that a group of students in his class kept calling him a terrorist and it happened over and over again. When he went to his teachers and told them what was happening, the teachers just ignored it. Eventually one day he got so upset and angry and he responded with some words for which he was sent to the principal's office and was suspended.”

Hindy says it made him realize he was going to be treated differently because of his religion and unfortunately his foreshadowing of his own treatment came true years later.

“Too often our teachers or educators are looking past these types of aggressions, harassment and bullying that Muslim students face for no reason,” Hindy said. 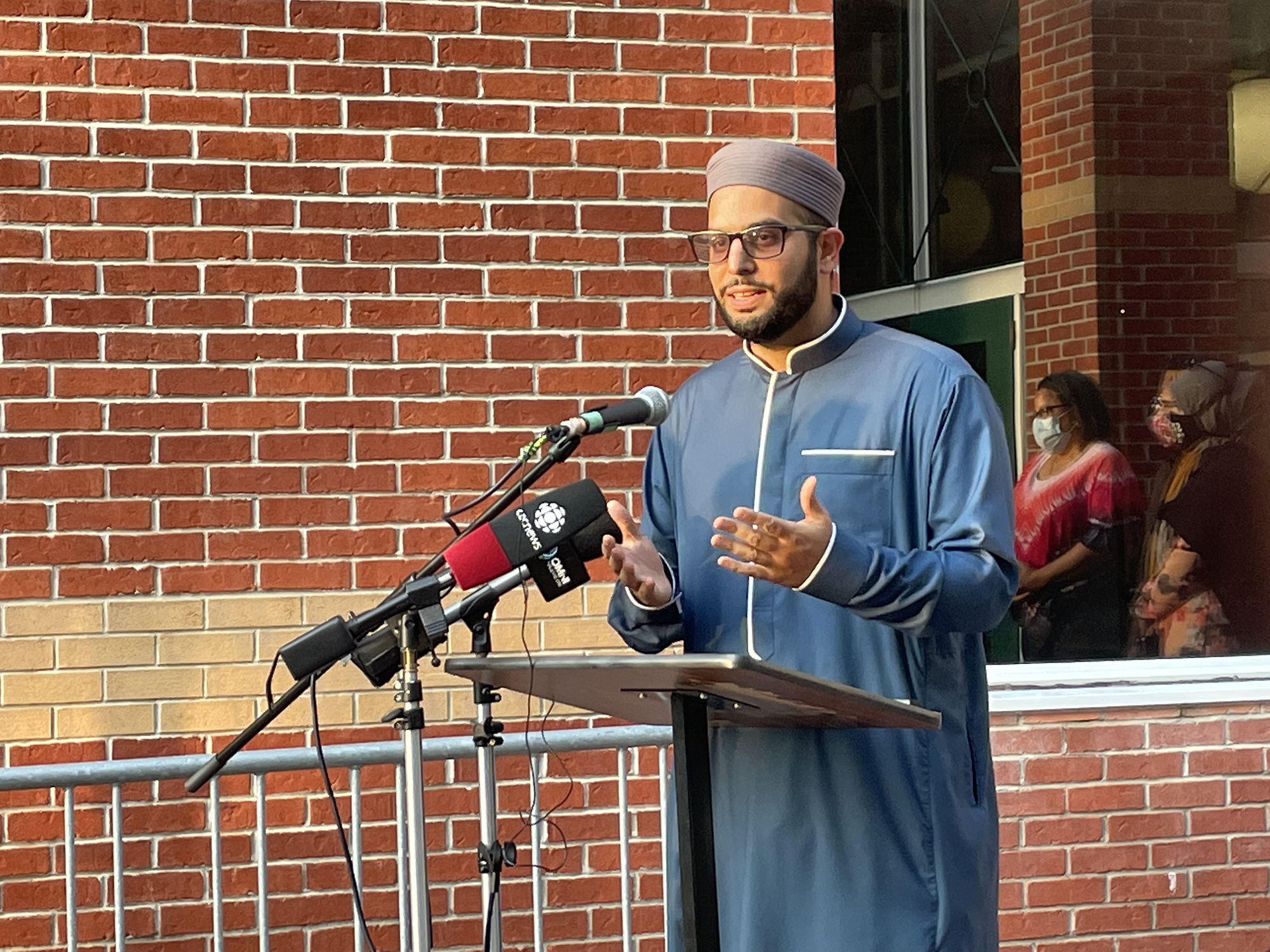 On Thursday, PDSB, the National Council for Canadian Muslims (NCCM), the Council of Agencies Serving South Asians (CASSA) and Urban Alliance on Race Relations, hosted a press conference to announce a groundbreaking new strategy that will be launched in Peel’s largest school board to combat Islamophobia, which has been spreading across parts of the country.

Hindy says it’s long overdue and he hopes with this new approach, no other child has to go through what he and many others faced.

Unfortunately, the reality of intolerance and apathy in Peel hasn’t changed much over the years, despite the lightning-fast transformation of the region’s demographics.

Too often, alongside the remarkable diversity and large numbers of newcomers, fear of the other also arises.

The Muslim Council of Peel estimates that ten percent of the region’s 1.6 million residents are Muslim.

Marwan Ismail, a 17-year-old Grade 12 student was at the press conference and spoke of his own experience.

"When I was in sixth grade, coming home from what was a bad day made worse by two Grade 8 bullies, they teased me on what I wore, how I looked but eventually started calling me a terrorist constantly, repeatedly,” Ismail said.

The manager of education programs at the NCCM, Aasiyah Khan said, “In the last five years we have lost 11 lives to deadly Islamophobic violence in Canada and all these acts of violence were committed by young men.” 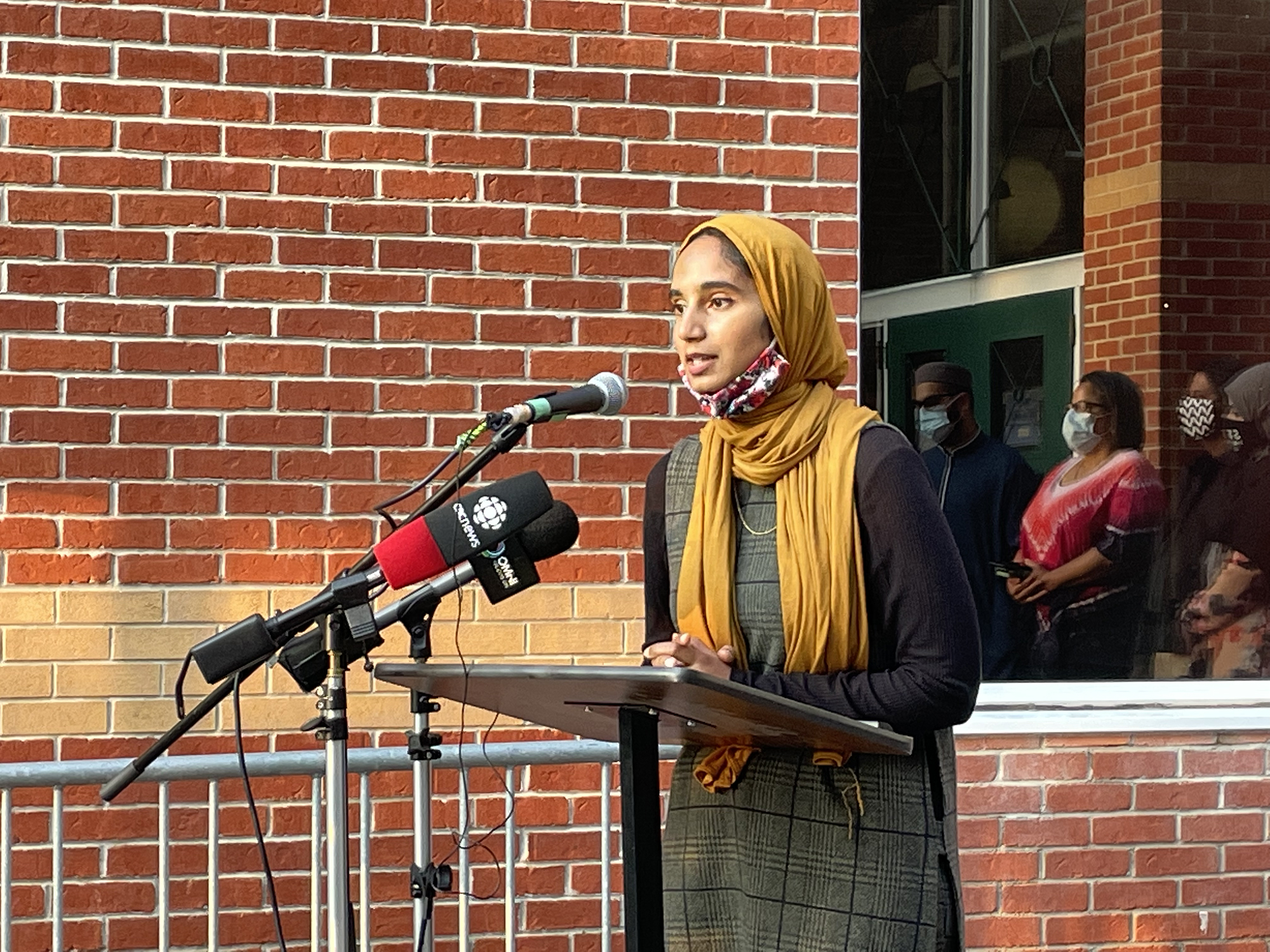 Aasiyah Khan, manager of education programs at the National Council for Canadian Muslims, spoke of the deadly consequences Islamophobia has had in Canada.

“What makes hate run so deep that it would drive a young man to commit such an unspeakable act?” Khan says that education is a long-term solution toward eradicating all forms of xenophobia and toward ending the violence faced by many Canadian Muslims.

“This is a bold, and much needed first step toward eradicating Islamophobia from schools in your region,” she said.

Hasan said CASSA along with other community groups hope to hold the PDSB accountable and will work alongside the board throughout the implementation stage.

“Hate, racism, bigotry, has no place anywhere in society, especially in our schools, where young minds absorb so much of what they learn, as this knowledge shapes their behaviour,” she said. 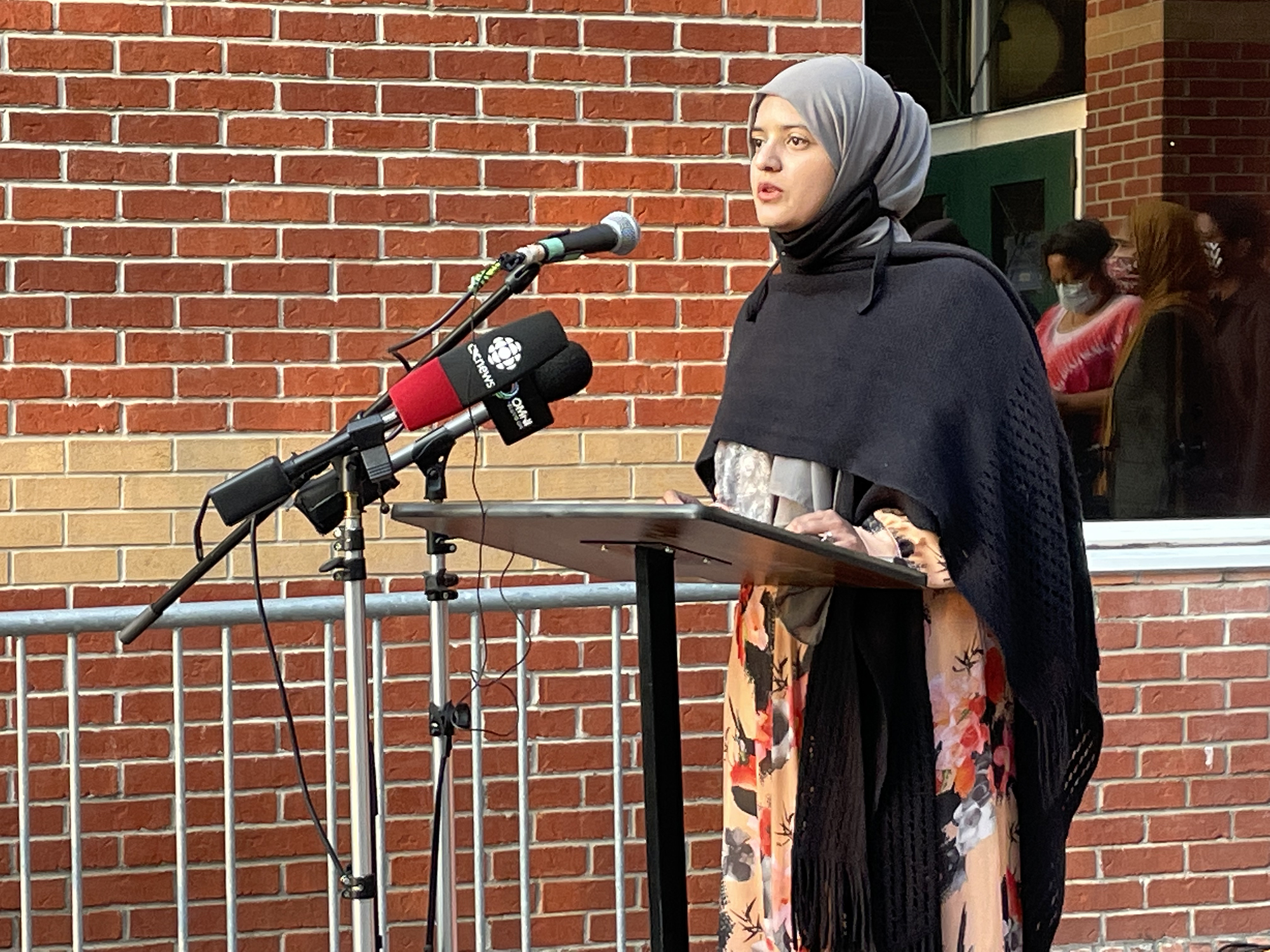 Samya Hasan, executive director of the Council of Agencies Serving South Asians urged the provincial government to adopt similar strategies in school boards across the province.

Hasan says this is a widespread issue and urges the Ontario government to adopt similar strategies across the province.

“I’d like the provincial government and other school boards to heed to the calls of the Black communities, and Indigineous communities to develop anti-racism strategies across the school boards, to revise curriculum to truly reflect experiences in the country,” Hasan said.

“We all know there's a serious level of denial when it comes to naming Islamophobia, so this actually sends a signal that Islamophobia is acknowledged as a problem by the school board as a systemic flaw,” he said.

The pioneering initiative came out of a motion introduced in August by PDSB trustee Nokha Dakroub.

Shan says he hopes the province finally addresses the rise in intolerance and acts of racism, so individual trustees, sometimes fighting for change on their own, don’t have to bear a burden that should be a priority of the entire education system.

“We are hoping the other school boards are listening and watching and they will do the same thing.”

Omar Zia, one of two principals at the Woodlands Secondary School in Mississauga also spoke Thursday.

“There are Black, Indigenous, queer and Muslim [students] and there are Muslims who have a different range of abilities or disabilities, so when we look at wiping out Islamophobia we should look at addressing all forms of racism and discrimination wherever they may be,” he said. 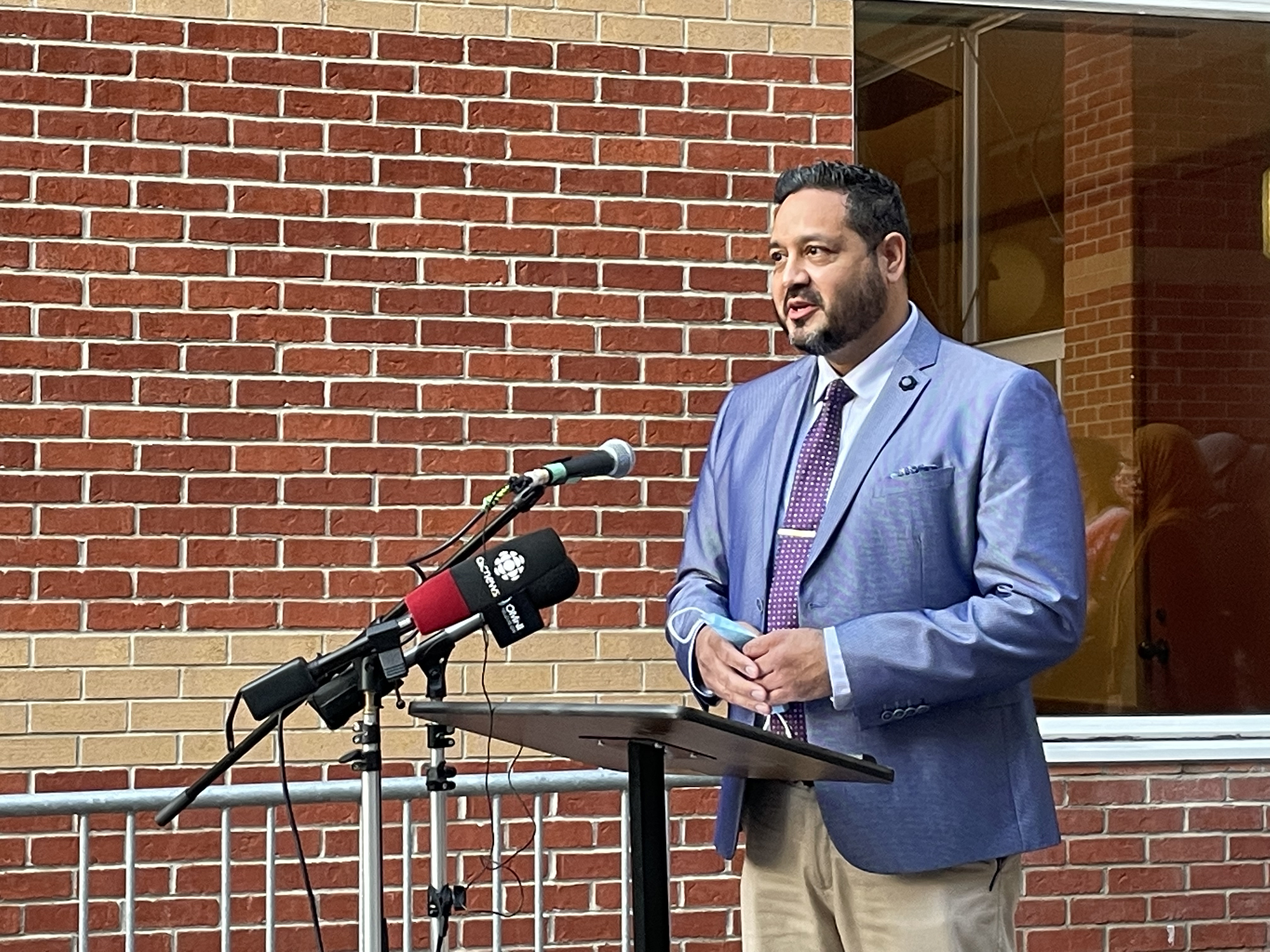 Zia hopes the mandatory training that will be part of the new strategy helps dismantle not only Islamophobia but also homophobia, anti-Sikh intolerance, racism against Black and Indigenous people which are widespread in our multicultural society.

“We must stamp out racism in all forms.”

Rashmi Swarup, Director of Education at PDSB, said that no student should feel marginalized and that PDSB is committed to improving the well being and achievement of all students. 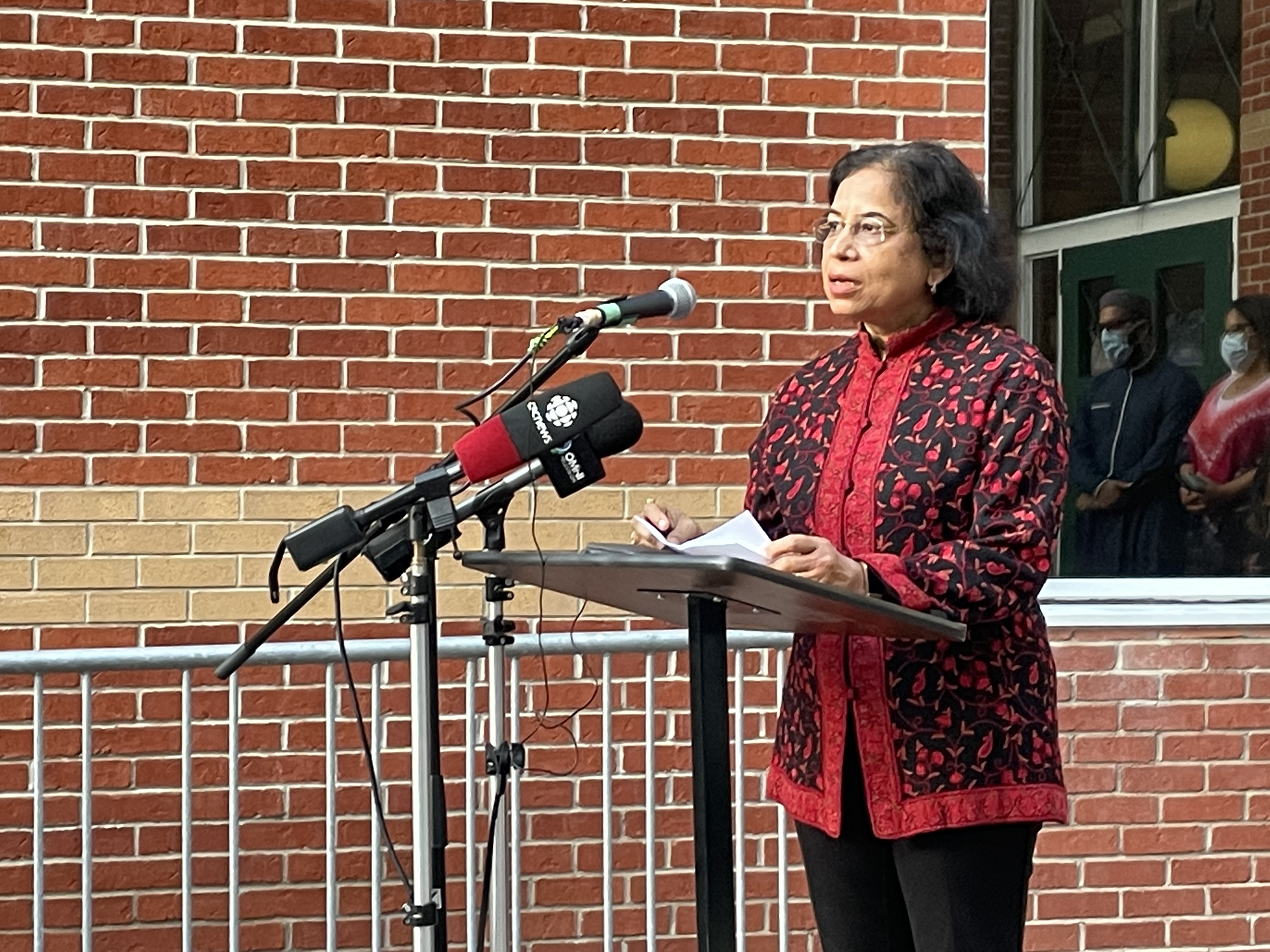 The director of education at PDSB, Rashmi Swarup.

“This means confronting Islamophobia and dismantling the systemic mechanisms that enable anti-Muslim hate with both education and conscious actions,” Swarup said.

“We have to come together as a community, and push back on hatred and bigotry,” Mayor Crombie said.

“I'm so incredibly proud tonight of the Peel District School Board for taking action and taking steps to address the rise of Islamophobia, through the passing of Trustee Dakroub’s motion.”

Crombie has been criticized for taking performative steps to confront racism and intolerance in her city, and Brown recently refused to apologize for inadvertently referring to Brampton as Brown-town in an address to Black scholarship students.

While welcome, the presence of the mayors was also a reminder that words without action has been a problem that has kept many of Peel’s public institutions behind. Both mayors preside over City Halls found to be woefully lacking in equity and inclusion, as evidenced by recent audits inside each municipal administration. 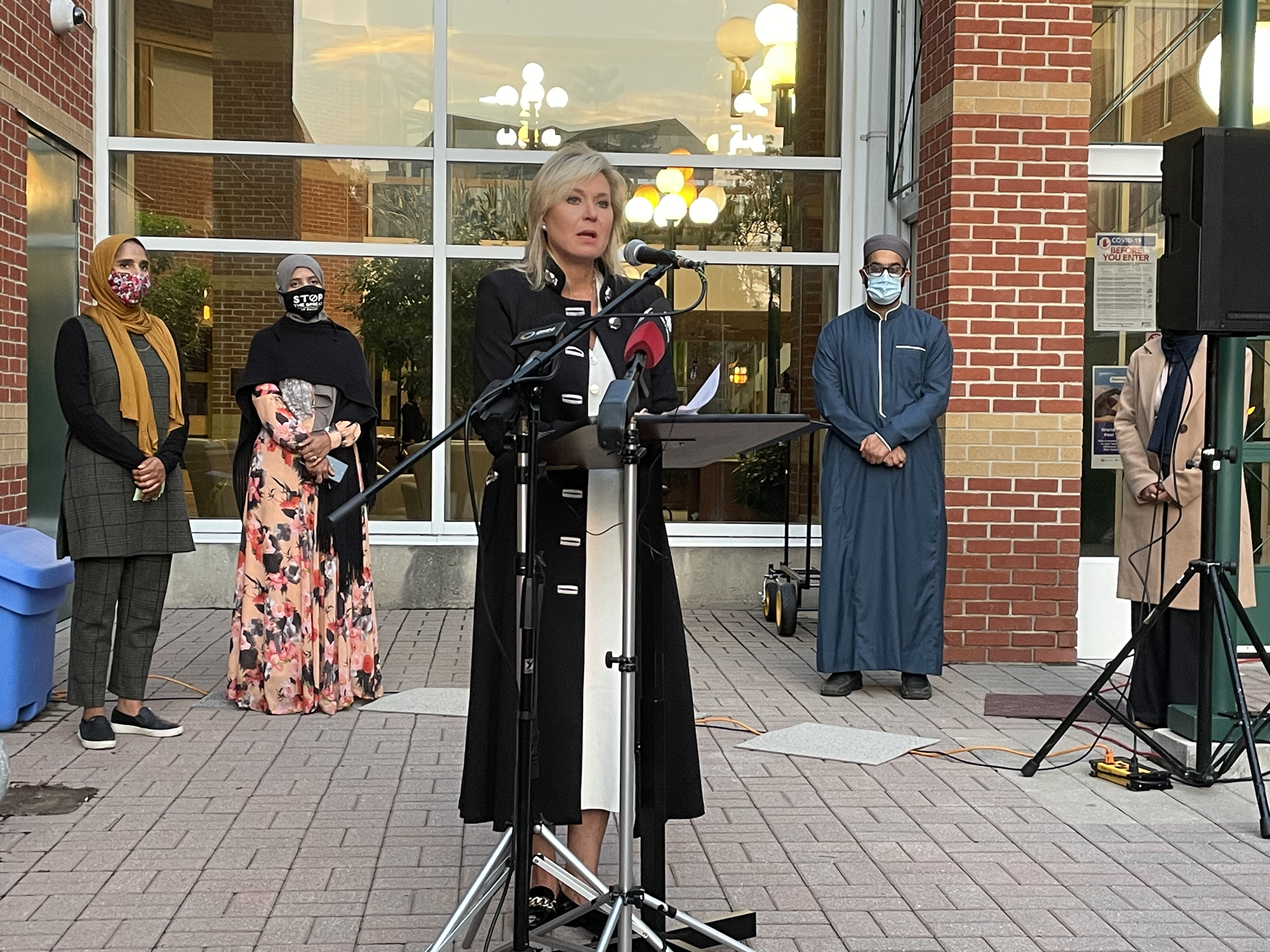 Mississauga mayor Bonnie Crombie at the PDSB head office, said that she’s “incredibly proud” of the PDSB for passing the motion for an anti-Islamophobia strategy.

Rabia Khedr, head of the Muslim Council of Peel, who was a former commissioner of Ontario’s Human Rights Commission, couldn’t make it to the event, but offered her glowing endorsement.

“I hope that Muslim students will feel a greater sense of belonging and inclusion. Hate incidents will decline and all students will benefit in a more inclusive and welcoming environment,” Khedr said in an email exchange with The Pointer.

She says once a strategy is passed, its implementation and monitoring is critical.

“Policies are great to have, but their impact is in practice. Elected officials have to remain committed to a robust implementation process and actively monitor the process every step of the way. As they measure progress, they have to share arising successful practices and tools.”

Khedr also says the upcoming elections should not disrupt this ‘journey’.

“When we commit to transformative change, we have to involve people with lived experience wholeheartedly to achieve it,” Khedr said.

Dakroub, the PDSB board trustee who put forward the motion for the new strategy, said it is meant to include the delivery of mandatory anti-Islamophobia training to all staff, including accountability measures.

Dakroub says Islamophobia’s systemic supports are ingrained in our society and the true meaning of inclusion is in recognizing that we are all different, celebrating those differences and finding common values.

“This is about a young girl who wears a hijab and goes to school, not far away from here, to know that in our country she can be whoever she wants to be, and that she can reach her potential. And her educators and her peers believe in her and that the entire community is cheering on,” she said.

“So to all the (little girls) out there, we are doing this work for you,” Dakroub said. 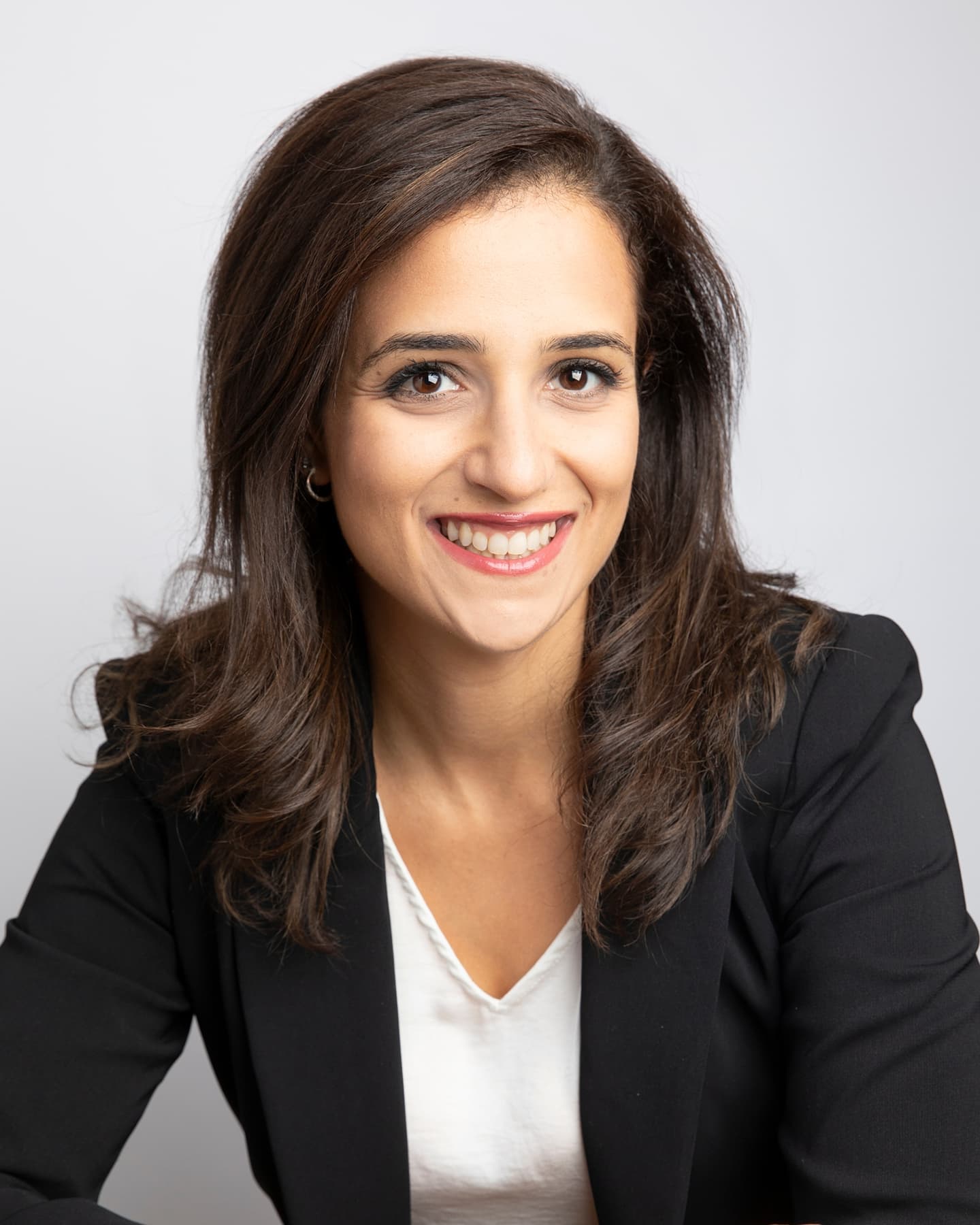 PDSB Trustee Nokha Dakroub introduced the motion for the anti-Islamophobia strategy in August.

Dakroub has been working to address Islamophobia for years but the work toward the strategy only began after the horrific London Ontario attack that saw a young boy orphaned and the rest of his family killed in a targeted van attack earlier this year. Dakroub spoke to The Pointer in a Zoom interview prior to Thursday’s press conference.

“It really dawned on me after the murder of the Afzal family in London, that we have to do something that's going to make a tangible difference in the future. Something meaningful and practical,” she said.

The work toward the strategy began in the summer.

Dakroub says The National Council of Canadian Muslims (NCCM), Council of Agencies Serving South Asians (CASSA) and Urban Alliance on Race Relations have been working for months to put this together.

“We wrote the motion together at one of those meetings, and then I brought it to the board on September 30,” Dakroub told The Pointer.

“This is the first strategy of its kind of in the entire country,” she said.

“I strongly believe that public education is the key to countering hateful narratives.”

Dakroub says Muslim students face bullying and ‘lower expectations’, where they get less attention by staff just because kids do “well-enough”.

Part of the strategy is the requirement for mandatory anti-Islamophobia training for staff. The delivery of the training does not seem like an issue to Dakroub, but certain elements of that training will need to be determined in collaboration with other advocacy groups.

“I think the content is what we're mostly concerned about, we'll have to make sure that we develop that along with the community organizations.”

Because of the ongoing pandemic, the training may occur online throughout the school year. The school board may use a facilitator to ensure staff members are not skipping the important training videos, something that has been observed with anti-Black racism training in the past.

“I don't envision this to be just a bunch of slides, but I can't speak to that because we haven't developed it yet,” Dakroub said

The training is compulsory for the staff, not for the students.

While the announcement is a first step, the Peel community will have to wait for the full details of the strategy, the content of the training and details on its delivery and the benchmarks to measure its success.

Who will be part of the anti-Islamophobia strategy committee has yet to be announced.

“I'd like to have staff representation," Dakroub said, "so that we can problem solve issues together quickly, because in an education system it's really a big bureaucratic environment."