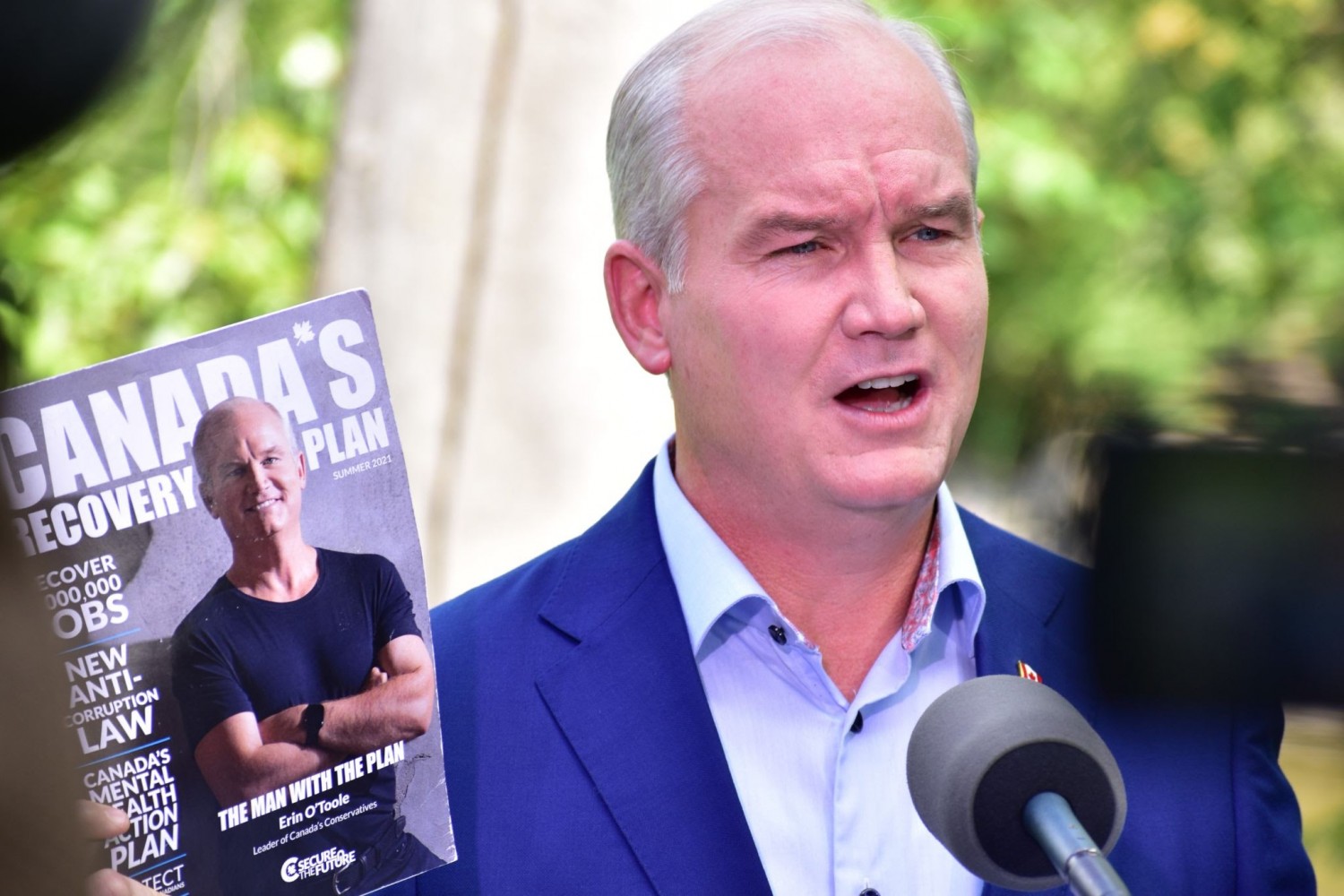 Conservative Leader Erin O’Toole got a very specific Mississauga experience as he stood behind the Port Credit Royal Canadian Legion on the edge of the Credit River.

Boats drifted along the meandering water in the background, which was framed by lush greenery. A stone’s throw away one of the city’s only independent breweries thrives, while regular commuter trains thundered past on the Lakeshore West GO line during O’Toole’s speech.

The portrait of Mississauga was a snapshot of how the city hopes to transform itself. Bold plans include world-class parks, accessible transit and a bustling restaurant scene. A far cry from the sleepy notion of the former bedroom community. But the reality for many still leaves much to be desired. North of Port Credit, residents are stuck on local buses for hours and many are cut off from Lake Ontario and a patio pint along the water by yesterday’s urban planning, as transit has not yet caught up with the city’s future ambitions.

To enable its transformation, the City of Mississauga has made a series of demands of federal leaders. At the beginning of the campaign, Mayor Bonnie Crombie sent a letter to all party leaders demanding taxpayers receive their fair share of funds back from Ottawa. 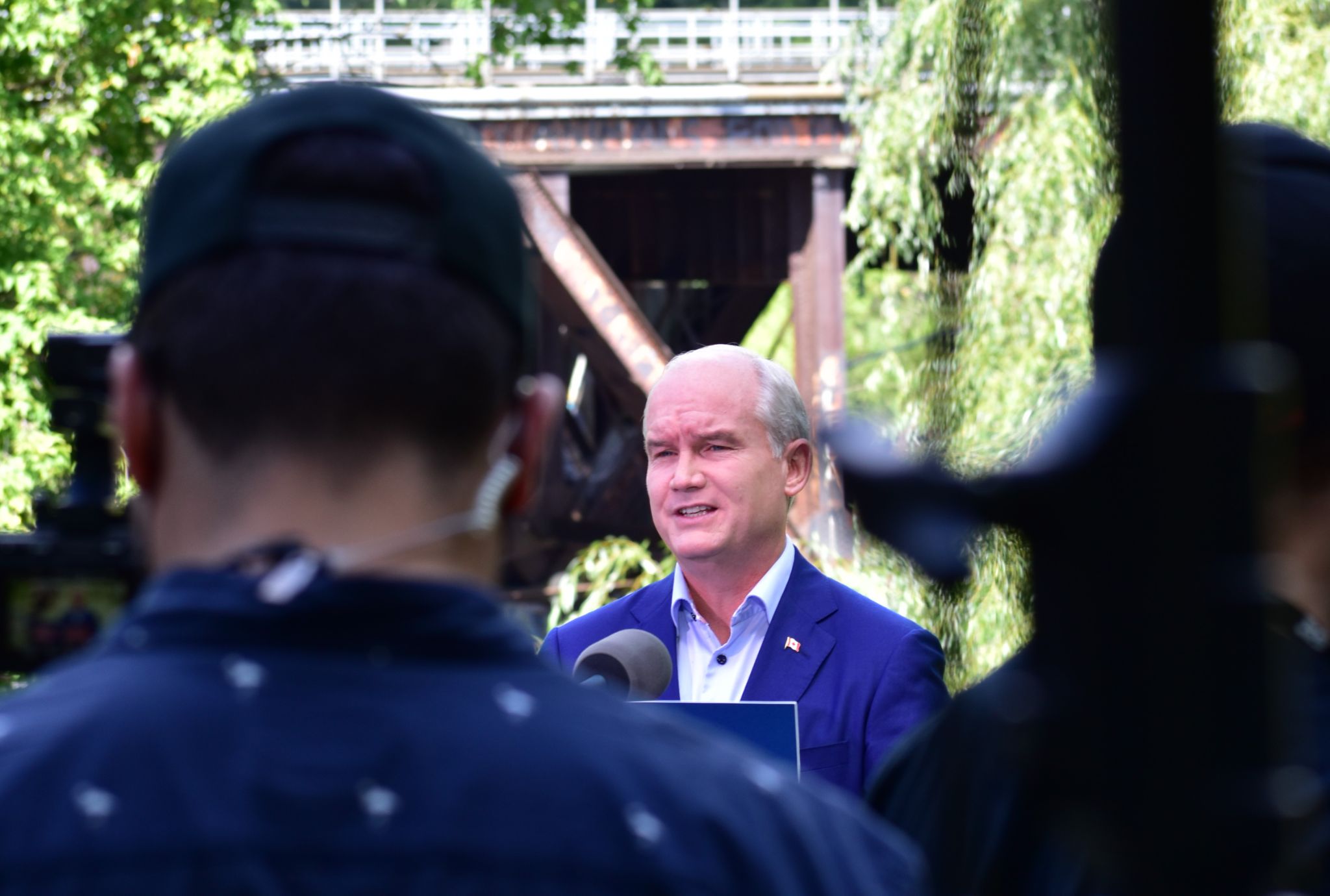 Erin O’Toole appeared in Port Credit in front of a GO rail bridge and the Credit River.

At the top of the mayor’s request was a list of upgrades to Mississauga’s transit network. The city is currently without a meaningful rapid transit system as it waits for the Hurontario LRT to launch in 2024. Its only current high order transit asset is the Mississauga Transitway, an expensive and underutilized bus corridor.

O’Toole is the only federal leader to respond to Mississauga’s request, according to the City’s website. The Conservative leader sent his reply to Crombie early in the campaign but his words, while welcome as a sign of recognition, were light on detail. References to GO Transit expansion and the Eglinton West LRT extension (largely built through Toronto) were his only acknowledgements of specific transit needs.

The City wants support for two-way, all-day GO (something the Liberals have loosely promised) and funding to add roughly two more kilometres to the Hurontario LRT’s route, looping it around downtown, as was the original commitment when the previous Ontario Liberal government announced funding for the full route, before the Doug Ford PCs cut the downtown loop out of the plan, citing rising project costs. The City has also requested a new downtown transit terminal, along with a bus rapid transit route along Dundas Street. 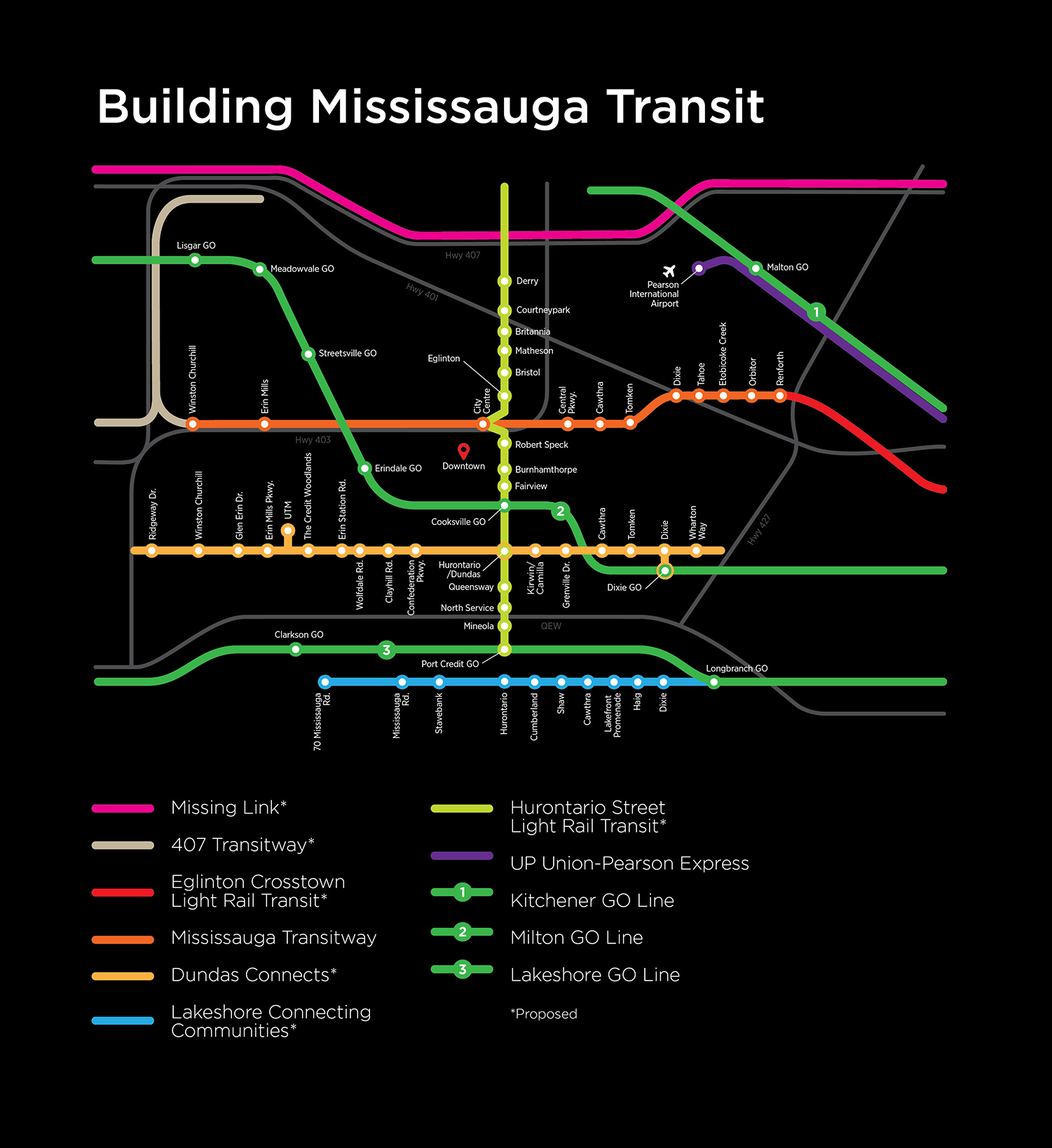 Mississauga’s aspirational transit plan will require significant funding from all levels of government.

Funding for all four requests would catapult Mississauga’s transit network into the future. It would mean subway-style service on the Milton GO line through the heart of the city, buses could bypass traffic on one of the city’s busiest streets and an LRT would serve its rapidly growing downtown population, while providing linked bus routes throughout the city a central rail spine right down to the Port Credit GO Station. A central transit hub would also be developed.

Pre-pandemic ridership data show Dundas Street as the second busiest transit route in Mississauga. The City of Mississauga asked Ottawa to help manage the $305.7-million cost of building a bus rapid transit route along the street in 2019. When Parliament was dissolved and the election called, the incumbent Liberals had not made a decision on the project.

The Pointer asked if O’Toole would commit to Mississauga’s request for Dundas Street funding.

“We want to see success and for the commute times and for the Dundas transit project, we will try and be there as a partner,” he said. “Part of our housing commitment is also to make sure that we push for density and more housing as part of our transit investment. We have got a very comprehensive plan to get a million homes built in three years, partnering with all levels of government as opposed to ignoring these issues and making them worse as Mr. Trudeau has.” 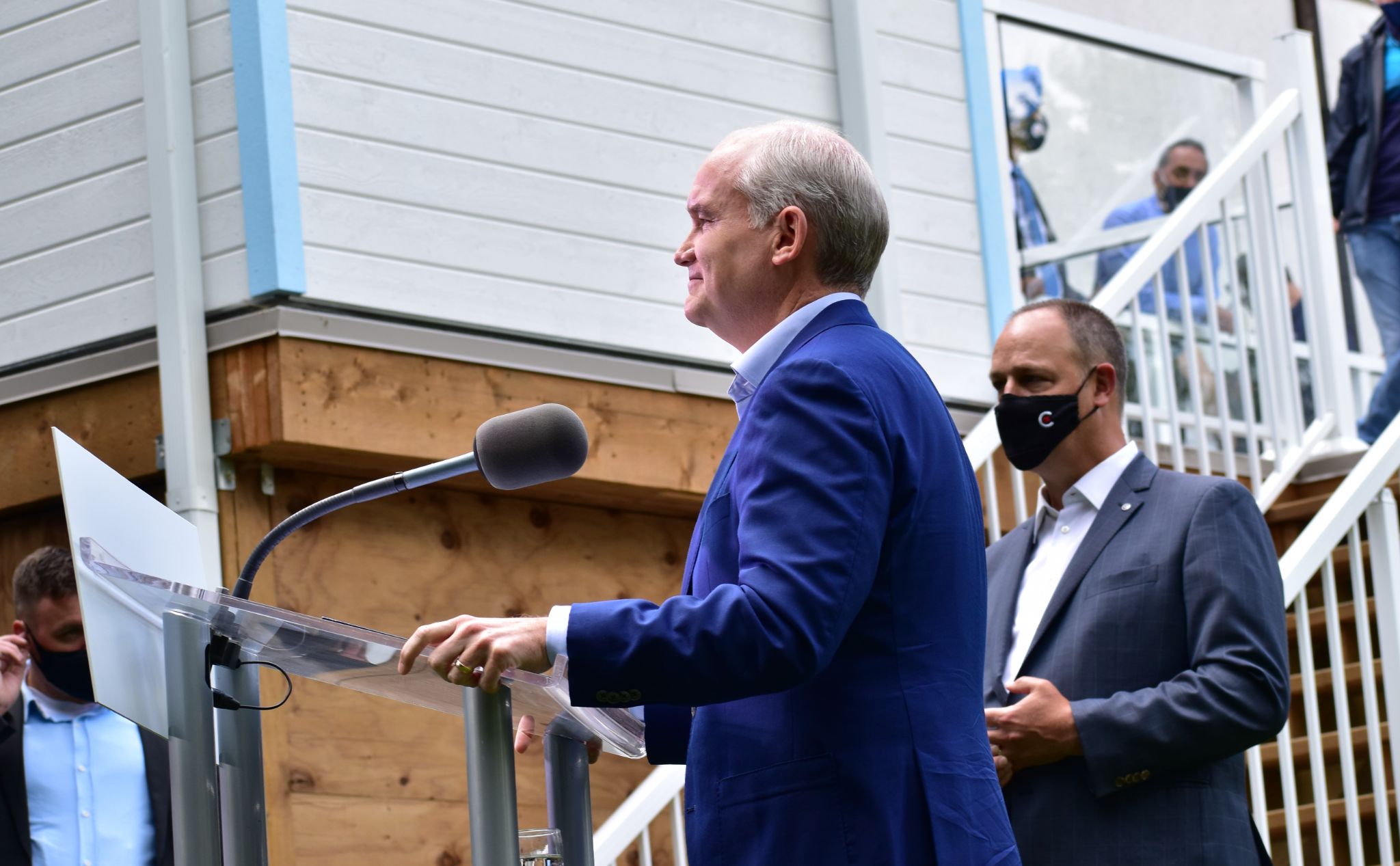 O’Toole listens to a question in Port Credit Friday.

As O’Toole suggested, the success of Mississauga’s rapid transit network could go hand-in-glove with its housing policy under a Conservative government. The Party’s platform says it will “require municipalities receiving federal funding for public transit to increase density near the funded transit.”

It is unclear exactly how the Conservatives would define “near the funded transit” for housing density. The Province uses a system of Major Transit Station Areas to govern its transit-oriented housing projects, only applying the term beside higher-order transit stations such as light rail, bus rapid transit or commuter rail. This would mean to increase density in Mississauga through funding incentives, the Conservatives would have to support requests for bus rapid transit or LRTs and not just dollars to improve its bus fleet generally. The bus system largely extends out to the city’s sprawling subdivisions where density is only found in patches, where the odd high-rise or townhouse development is surrounded by single-family homes.

O’Toole was in Port Credit on his first campaign visit to Mississauga. He was shadowed at the podium by Mississauga—Lakeshore candidate Michael Ras. The riding, a Conservative target in the 2019 election, is also being contested by Sven Spengemann for the Liberal Party, Sarah Walji for the NDP and Elizabeth Robertson for the Greens. Vahid Seyfaie is representing the People’s Party of Canada. 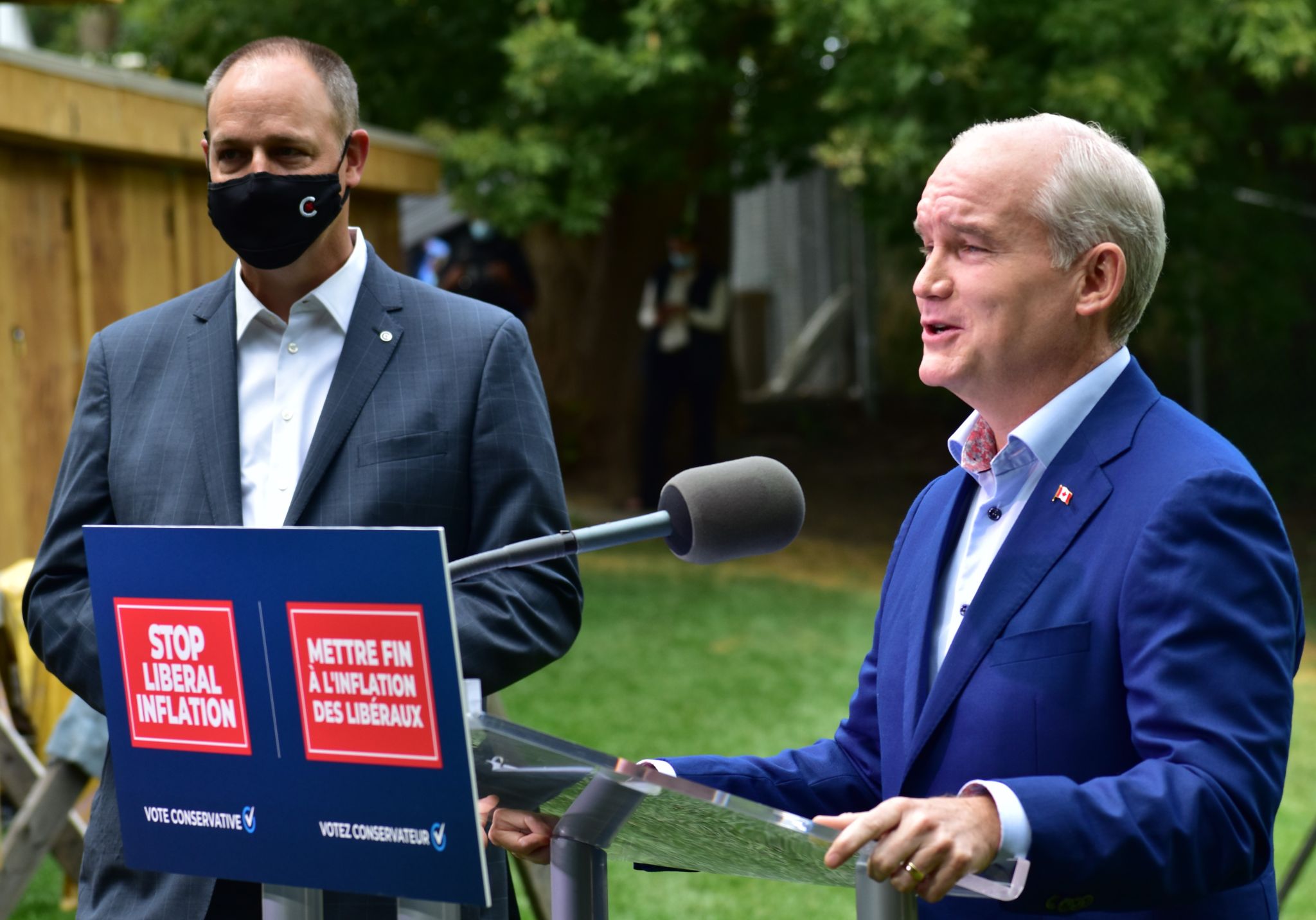 Michael Ras (left) is the Conservative Party of Canada candidate for Mississauga—Lakeshore.

The Conservatives have failed to secure any seats in Brampton or Mississauga in either of the past two elections — the Liberals swept both cities in 2015, and again in 2019, with eleven red seats.

This year, even two or three of those, could be the difference between a Liberal or Conservative minority government, which is what current polling suggests will be the outcome after September 20.

O’Toole is hoping for a return to the 2011 election result, when his party won every seat in Peel.

Across the 905 generally, previous Conservative leaders have struggled to breakthrough. That’s something O’Toole says he wants to change by rebranding his party, including vocal support for action on climate change.

“I’ve said many times, we need to rebuild trust with some Canadians, including some suburban folks in Ontario,” O’Toole said in Mississauga. “We’ve worked very hard to do that with respect to the environment — that’s why we put out a plan in April; with respect to economic recovery — we have a plan to get Canada back on its feet… we’ve got a new leader, we’ve got a plan, we’ve got incredible candidates.”

One issue he did not address is the controversial GTA West Highway. It has become a lightning rod across parts of the GTA and the next federal government will decide its fate, following the conclusion of an ongoing review by the impact assessment agency.

The Conservatives have not issued a formal position on the future of the highway.

With advanced polls open and the election barely a week away, O’Toole and his party won’t have to wait long to see if their rebranding exercise works in the vote-rich 905.