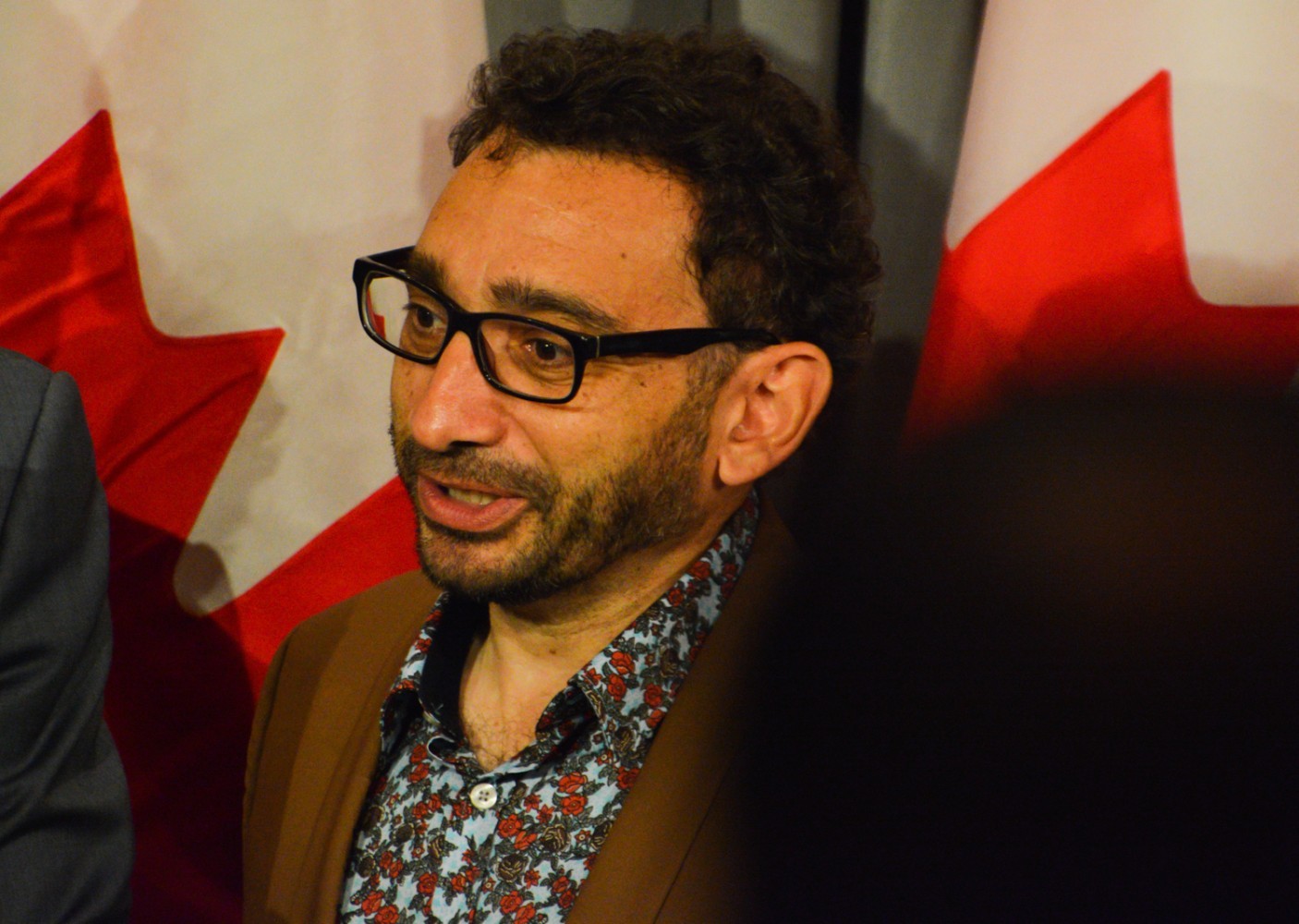 The latest federal election didn’t come as a surprise to Omar Alghabra.

The Mississauga Centre candidate is Peel’s most senior federal incumbent and was a key member of Justin Trudeau’s cabinet. Until February, he sat on the procedure and house affairs committee, which dedicated hours to gaming out the possibility of a pandemic election.

Alghabra was raising the idea of a snap poll as early as October 2020. Speaking in a debate, the Liberal teased a snap election as the consequence of not supporting his party and government.

The democratic process was a theme that ran through Alghabra’s speeches and contributions to Canada’s 43rd Parliament. 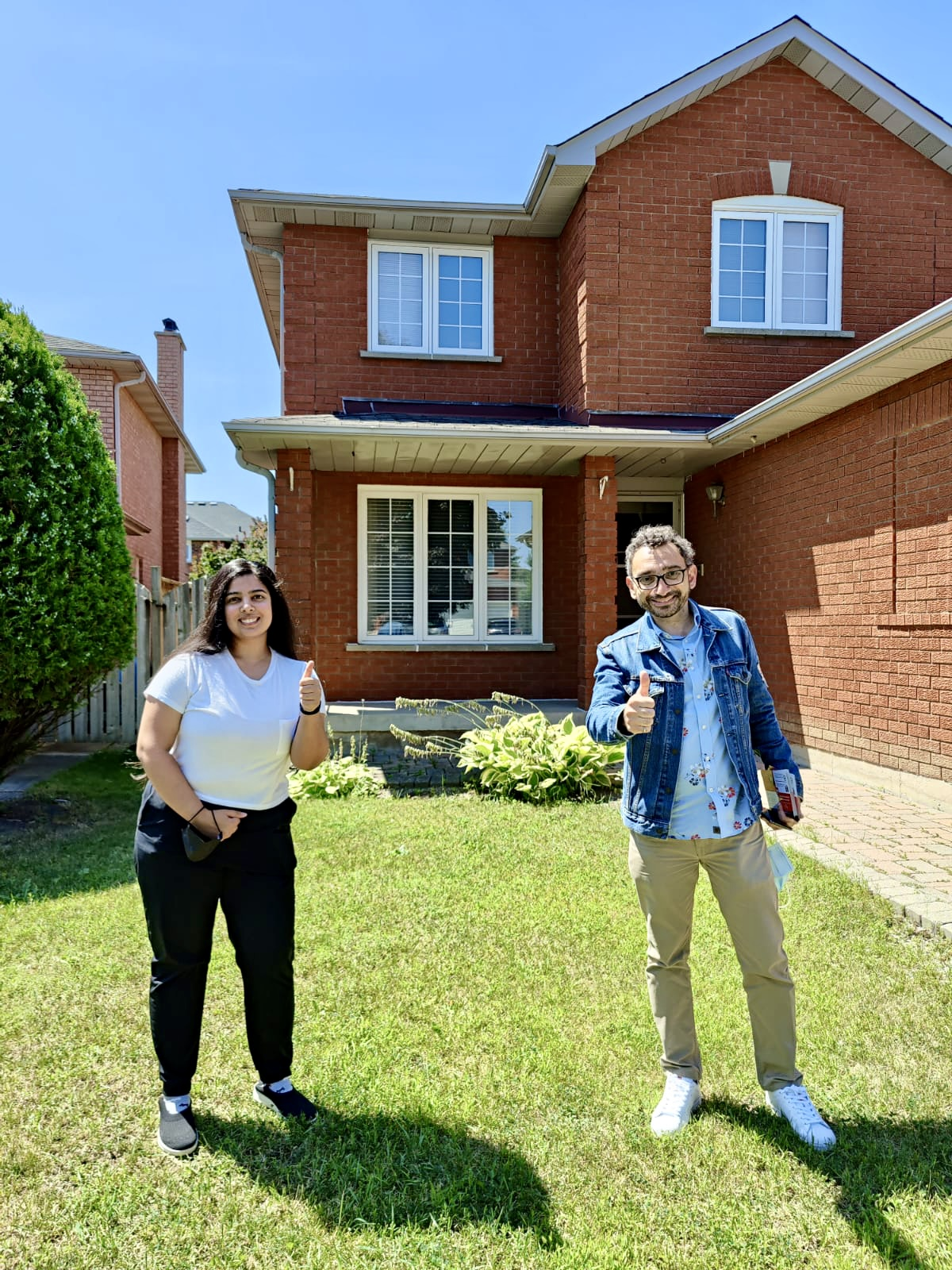 Alghabra with a local resident.

If, as he threatened in his comments, the election had been called at the end of 2020, Alghabra would be seeking reelection as a backbencher. Instead, he is knocking on doors in Mississauga with a much higher profile, as the latest transportation minister.

The Mississauga Centre candidate has, through several speeches in Parliament, cleverly matched the city he represents with his new portfolio.

As transportation minister, Alghabra has been in charge of railways, ports and the aviation sector. His portfolio has bled into health during the pandemic, infrastructure, city building and even housing. All are issues his riding has been grappling with for more than a year.

Mississauga is also home to Toronto Pearson Airport, Canada’s busiest international travel hub and hosts thousands of aviation and transportation-related jobs located in the surrounding area. Many of those jobs felt the impacts of COVID-19, as industries grappled with travel restrictions and global closures that decimated the demand for leisure and business travel.

“Mr. Speaker, as the member of Parliament for Mississauga Centre, where many employees of the aviation sector live and work, I am very much in touch with them, and the anxiety they are going through today due to the COVID pandemic,” Alghabra said in February.

His February speech was one of only a few times he mentioned his home city by name.

According to records on the House of Commons website, Alghabra only made 62 interventions in the parliamentary chamber over the past two years. He made 165 interventions in committee. The Pointer found few direct references to Mississauga Centre in his Hansard records, which show the MP speaking in his cabinet post and as a Liberal Party member more than as a representative of residents in Mississauga Centre.

Mississauga Centre is being contested by Teneshia Samuel for the NDP and Kathy-Ying Zhao for the Conservatives. Craig Laferriere is the Green Party candidate and Elie Diab will represent the People’s Party of Canada.

Alghabra’s party loyalty plays out in his uniform voting record. Even at times when multiple Liberal MPs chose to vote in favour of opposition motions or legislation, Alghabra stuck with the direction of his party.

In May, for example, Marilène Gill (Bloc Québécois) saw the second reading of her legislation to amend the Bankruptcy and Insolvency Act pass with the support of the Green Party, NDP, Bloc, Conservative Party and independents. While 139 Liberals voted against it, 10 opted to vote in favour. Alghabra was not one of those to break ranks.

This loyalty cuts to the heart of how Alghabra views the role of an MP. He does not see public dissent as a constructive approach to representation, preferring to hash out policy debates in private.

“My job is to carry the voice of my constituents to Ottawa and to our government and to be the voice on behalf of my constituents at the table,” Alghabra told The Pointer at a recent event in Mississauga-Streetsville. “There are a lot of the discussions that happen at the table that are not reported on publicly because that’s the way we need to be able to have an honest conversation internally, and to be able to debate and to figure out the right policies.” 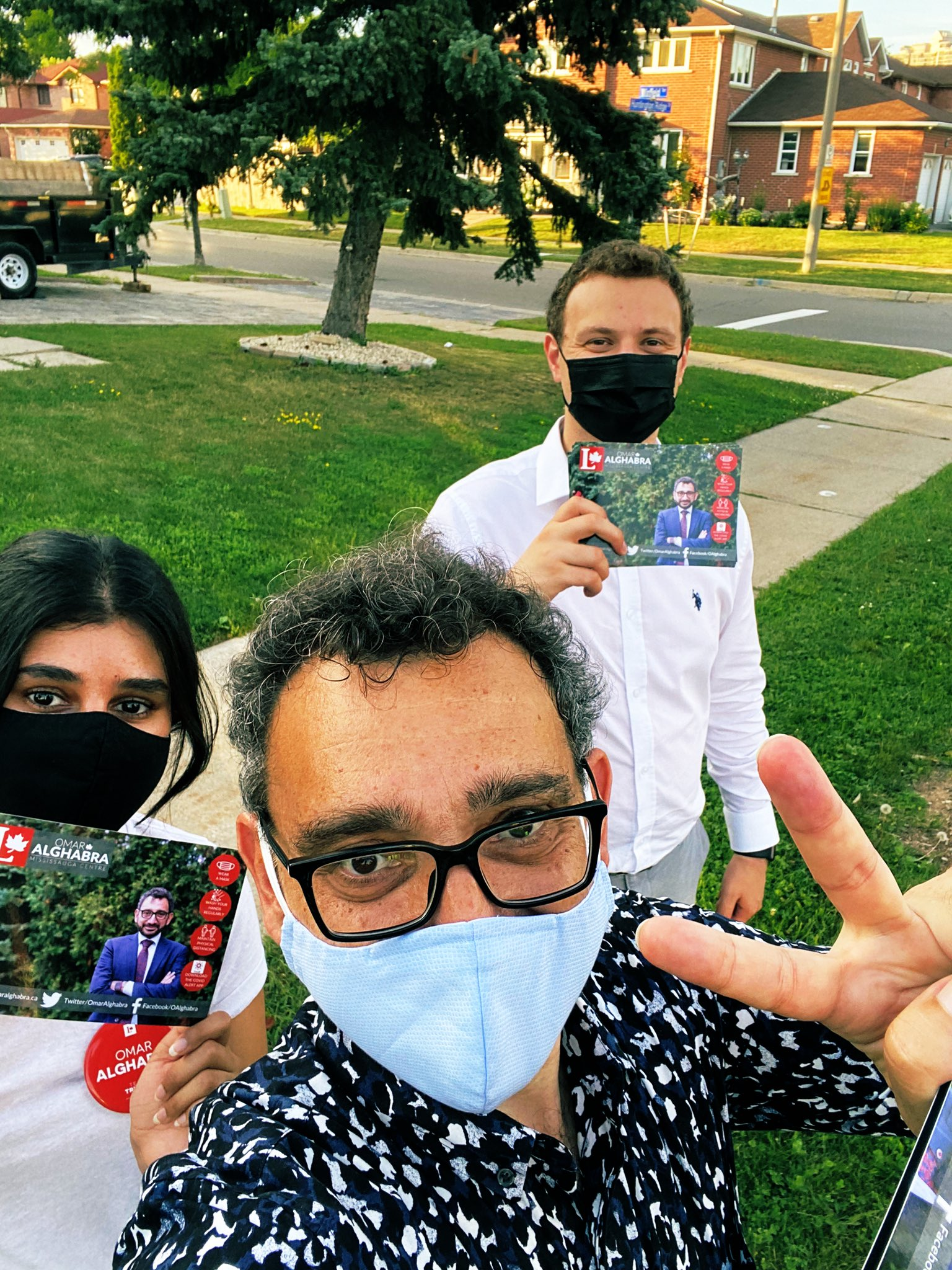 Alghabra is once again canvassing in Mississauga Centre.

Alghabra’s elevation to cabinet capped off a varied resume, where he has gained increasing importance behind the scenes.

His interest in national and international issues, moving beyond the detail of public local advocacy, is reflected in the words Alghabra utters in parliament. Early in 2020, he spoke several times about international trade, the North American Free Trade Agreement (NAFTA) and Chinese-Canadian relations.

In April and May, his focus moved to committee discussions around how parliament might operate virtually during the COVID-19 pandemic. He was central to pandemic election conversations the following November.

Alghabra’s focus shifted noticeably after his appointment to cabinet. He relinquished his position on the procedure and house affairs committee, throwing himself into transportation. Under his watch, the government negotiated a deal with Air Canada to help refund passengers whose flights were cancelled because of the pandemic and navigated the thorny issue of land and sea ports in a world dominated by COVID-19.

“We understand that the pandemic has been hard on everyone,” Alghabra said in his last speech before Parliament was dissolved and an election called. “This is why we made significant progress in securing refunds for Canadians. My colleague knows about the deal that we have signed with Air Canada and Air Transat, and we are working on signing other deals with other airlines to ensure that passengers receive the refunds they deserve. We are committed to Canadian passengers.” 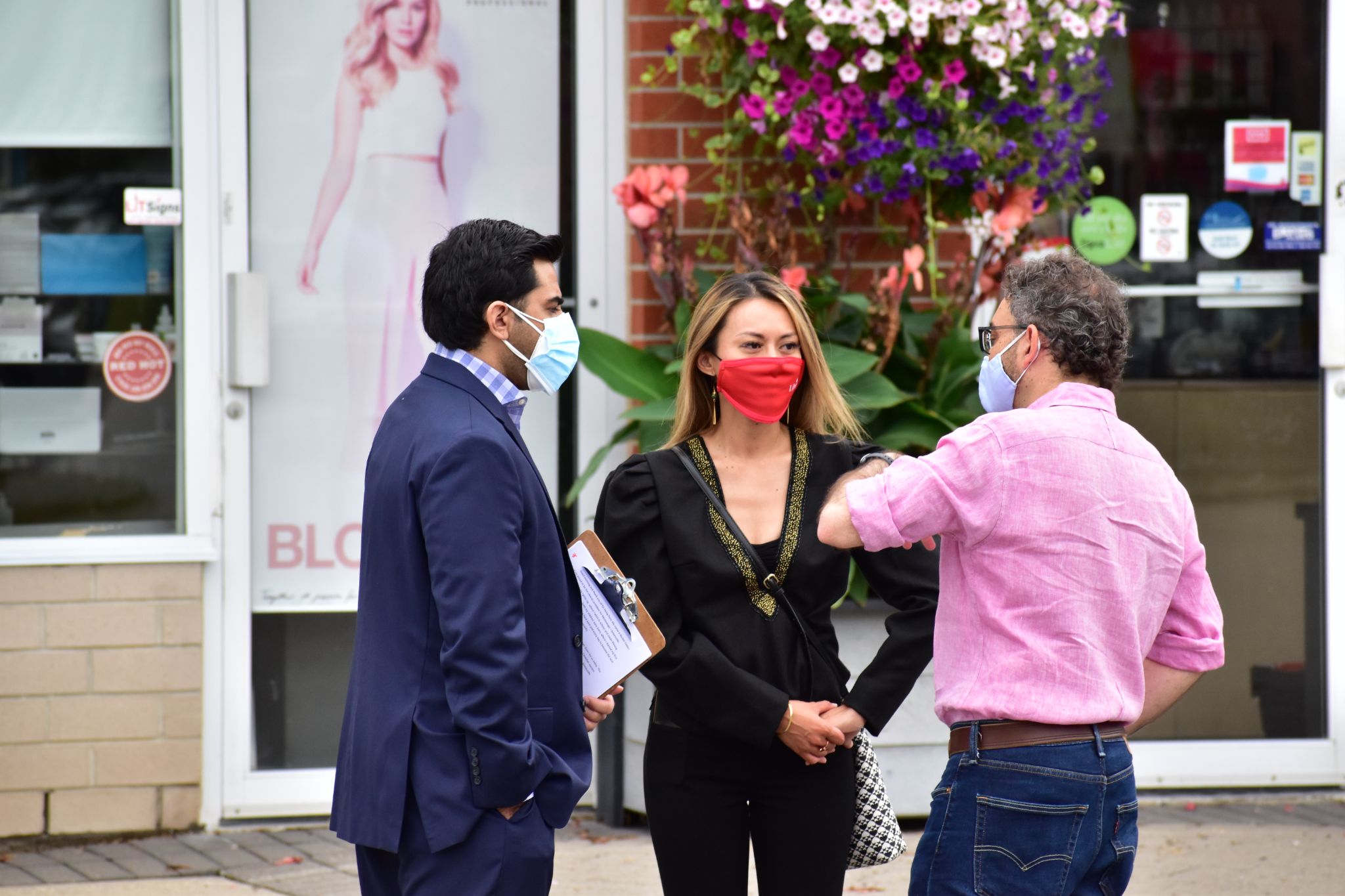 Alghabra (right) speaks to the Mississauga-Streetsville Liberal candidate and a party official.

Alghabra also spent tens of thousands of dollars on expenses during the past Parliament.

The $44,340.63 he spent on contracts between January and March 2021 was in the top 20 percent of contract expenditures for all MPs. A regular expense incurred by Alghabra over the past two years has been for a “subject matter expert” from Fadi Younes Consultancy LTD at around $2,000. On January 25, the MP’s office also hired a communications officer from the same agency for $5,000.

He spent a lot of the past two years dealing in public with the big picture. He waited until the dying days of the Liberal minority to announce a plan with the potential to transform his Mississauga community.

Likely cognisant an election was imminent and keen to motivate residents to send him back to Ottawa, Alghabra promised the funds to bring subway-style service to the Milton GO Train line. The route, which runs through multiple areas in Mississauga, is owned by Canadian Pacific Railways and only runs a handful of commuter trains per day. The cost of increasing the frequency of service has, in the past, been pegged at billions of dollars.

On August 10, Alghabra made an announcement in his dual role as local member of parliament and transportation minister. He said the federal government would fund 50 percent of the cost of two-way, all-day GO on the line. The details are yet to be ironed out, including a finalized proposal from Ontario transit agency Metrolinx and support from the Province, but Alghabra values the project at around $1 billion, and says Metrolinx plans to build an additional track alongside CP Railways’ line.

Just two days later, and three days before the election was officially called, Alghabra was campaigning using the announcement. He stood at Erindale GO station in Mississauga with a team of Liberal campaigners, promoting the newly announced federal policy as a reason to support the Liberal Party of Canada.

Rain or shine, the Liberal #MississaugaCentre team is keeping up the momentum! Mississauga can count on us to continue investing in public transit solutions, like the GO Train announcement we just made! pic.twitter.com/ayw89kg4vY

With one eye on an election most suspected was coming, Alghabra is teasing the benefits of his most ambitious promise, a transformative legacy project, as something that will only be delivered if voters return him and the Liberals to Ottawa. It’s a quid-pro-quo to convince constituents he, and his government, deserve a third chance to deliver.

“The only way I see this not coming is, well, I mean if we change government too at the federal government during this election or if the Province of Ontario doesn’t come through,” he said.