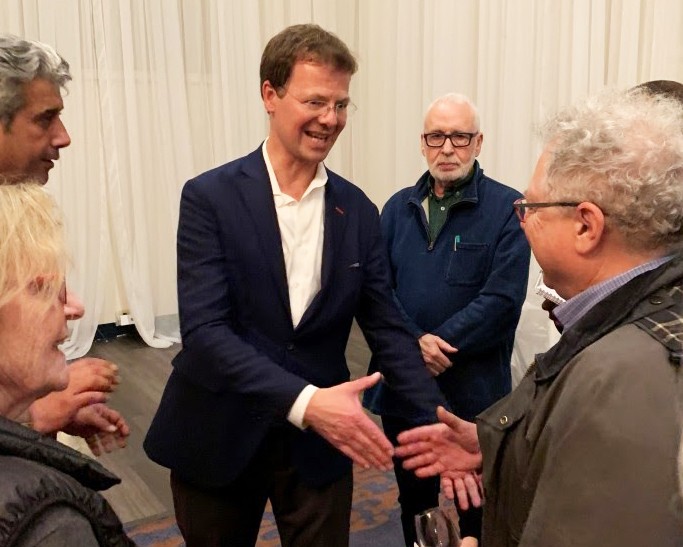 Sven Spengemann was involved with a lot in the House of Commons.

He sat on 12 parliamentary associations or inter-parliamentary groups, and co-chaired the Canada-Africa Parliamentary Association. To say the least, he kept busy over the past two years.

However, where Spengemann shines in committee meetings facilitating meaningful discussion and testimony as a co-chair, he failed to live up to his promises for his Mississauga—Lakeshore riding in Parliament.

Standing only 19 times in the past session, Spengemann offered many words of condolences toward those who have passed, on climate action and to offer thanks to many charity or non-profit organizations in his riding.

After winning reelection in 2019, Spengemann vowed to work on affordable housing and transit for his city.

“We remain very focused on infrastructure. We’ve committed $180 billion over 10 years,” Spengemann told The Pointer in 2019, referring to the Liberal Investing in Canada Infrastructure Plan, before adding that he would work to address any perceived shortfall in investment in Mississauga. “If there are shortages in that plan, I think that will be looked at very seriously, especially in our riding because we have growing density.”

He rose for the first time in Parliament last session in December 2019 to ask about his government’s infrastructure plan.

“Canadians across the country, including the people of Mississauga—Lakeshore, have benefited from those investments, for example those made in public transit and safe drinking water,” Spengemann said. 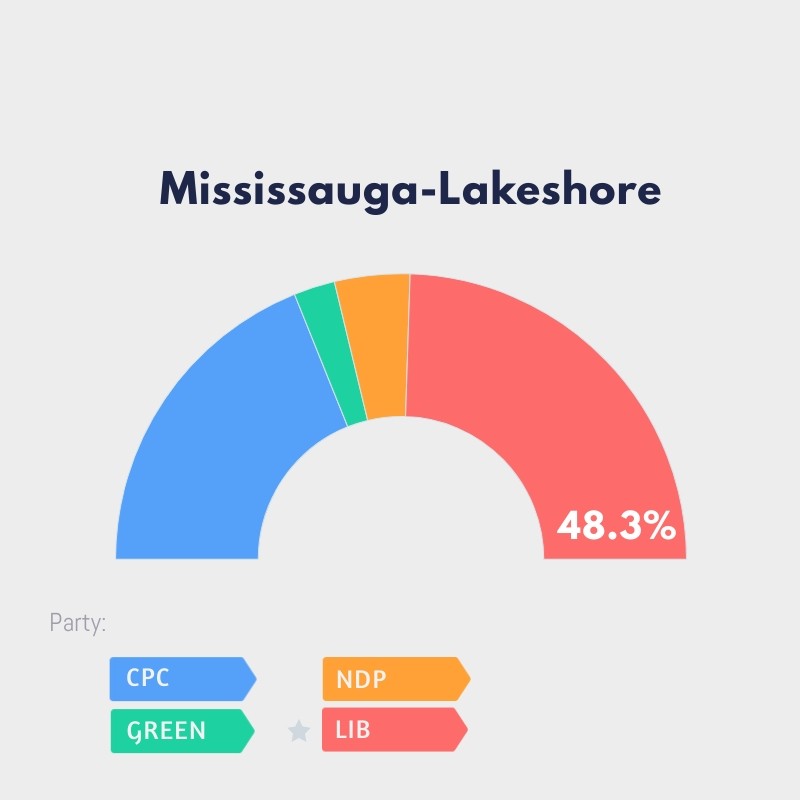 Spengemann won the Mississauga-Lakeshore riding with 48.3 percent of the vote in 2019.

The MP who vowed to work on transit never mentioned the word in Parliament for the rest of his term in office.

And over the past two years, Spengemann has not uttered the words “affordable housing” in the House of Commons.

Spengemann did not respond to interview requests from The Pointer.

Instead Spengemann focused on climate action, a topic very dear to his constituents along the shores of Lake Ontario. His second time rising in the House, he specifically mentioned his riding and the issue of plastic waste in landfills, parks and along the waterfront.

“Canadians across the country, including the residents of Mississauga—Lakeshore, have made it clear that they want action,” he said in February 2020. “Could the Minister of Environment and Climate Change please update the House on what the government is doing to tackle plastic pollution?”

In October of last year, Spengemann rose multiple times to address the House on the ongoing climate crisis, speaking about how, “The climate crisis runs parallel to COVID-19.”

Spengemann used his voice not only to address climate action but to push all three levels of government to use the pandemic as an opportunity for cooperation.

“It is important for all levels of government to stay on the same page. Whether it is about agriculture or health, this is not a time for divisions to open up. This is a time for people to move to the same side of the table,” Spengemann said.

Later on the same October afternoon, the Mississauga—Lakeshore MP rose again to enter into discussion about protecting lands and oceans in the face of climate change.

The riding Spengemann represents hosts some of the most beautiful shoreline parks and beaches in the City of Mississauga. Climate change impacts have been felt in the community when massive storms have flooded basements and streets more frequently, as debris pollutes parts of the shoreline.

The impacts are now routinely seen in neighbourhoods, sometimes costing millions of dollars during severe flooding. The City of Mississauga has poured money into its stormwater management plan, which relies heavily on winding creeks and creating stormwater ponds. The old infrastructure in Port Credit and Lakeview often does not benefit from home-backwater-valve incentives and other flood-mitigation initiatives put in place by the City.

Stopping or reversing climate change would benefit many of the public and private properties in his riding which otherwise will continue to be put under stress, a motivation for Spengemann’s advocacy.

In October 2020, Spengemann spoke three more times in the House and was then silent until December. On October 19, he recognized the Mississauga Food Bank and other agencies and how his government invested $100 million in an emergency relief fund for local organizations tackling food insecurity. 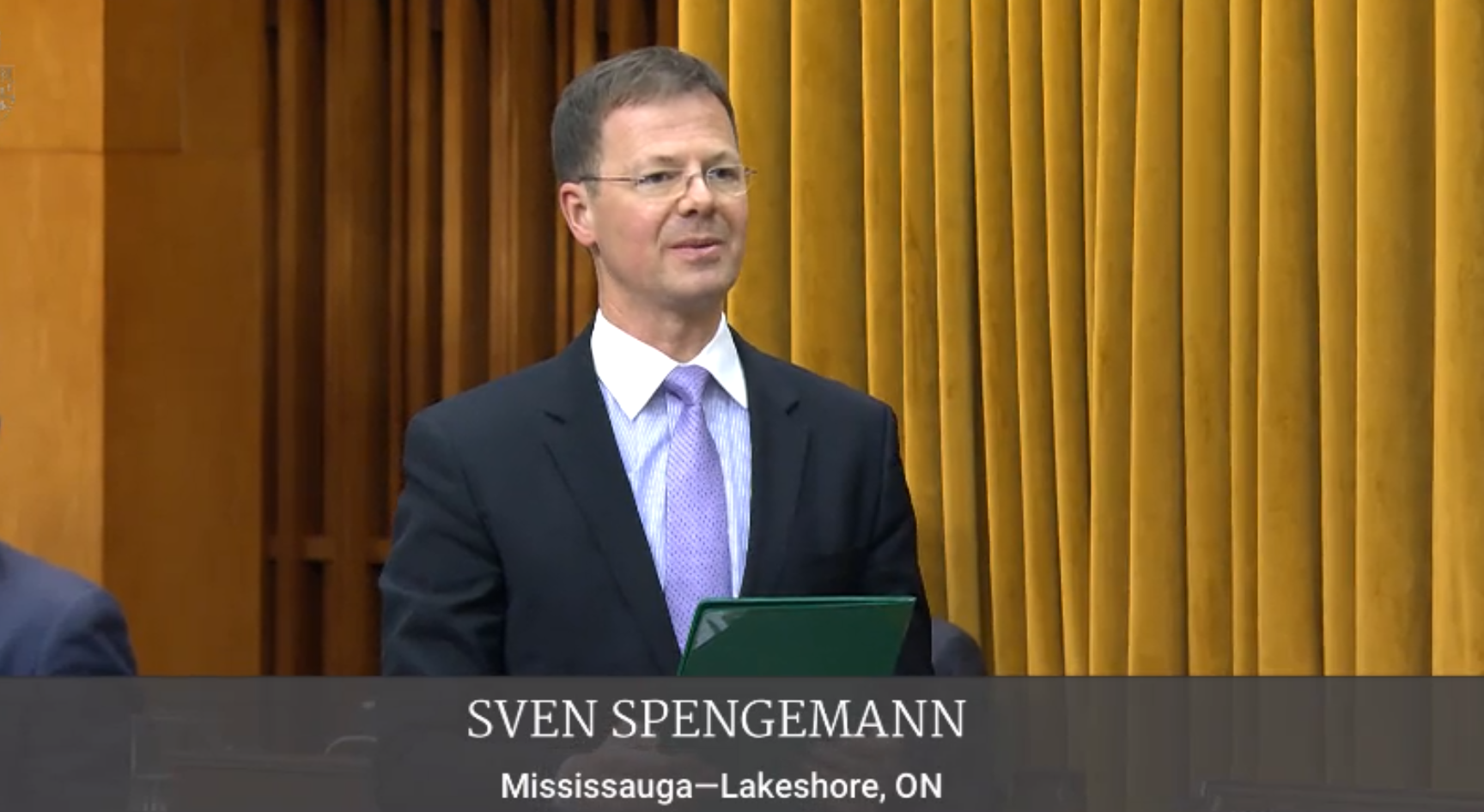 A man of a few words, Spengemann rarely spoke this past session in the House of Commons.

(Screenshot from Government of Canada)

On the second last day in October, the MP stood to address those in mourning for his riding as community leader Beatrice Moreira-Laidlow passed away. Three other Spengemann rose in the House to express his condolences after the loss of members of his community, during periods set aside for ceremonial matters where controversial issues and the business of government are not dealt with.

Broader infrastructure needs or asking questions about affordable housing funding, which he pledged to do, were not part of Spengemann’s priorities during his time in Parliament.

In December, while Mississauga was hit hard by the pandemic, Spengemann offered a “heartfelt thanks” to the nurses and doctors on the frontlines in Trillium Health Partners. He mentioned various other frontline organizations in Mississauga trying to keep their head above water. Later, when Peel politicians were fighting for access to better vaccine allocations, Spengemann was quiet, not offering his voice in the House of Commons to put pressure on the provincial government to fairly distribute vaccines based on need, after the federal government stepped up its efforts to bring more vaccine shipments into the country.

In 2021, Spengemann did not mention any topics of concern for his riding, nor use his position to address riding-specific issues. The last time he spoke was in June of this year when he asked the Minister of International Development how Canada can support Palestinians after Israeli military targeted the Gaza Strip.

“Palestinian civilians are suffering profound hardship, as a result of the recent violence, displacement and loss of life and have endured unimaginable pain. All human beings are born with equal, unalienable rights. We must all work to uphold them,” Spengemann said.

After two terms as the MP for Mississauga—Lakeshore, Spengemann is seeking a third term. Having worked in the community for the past six years many know his background. After immigrating from Berlin at age 14, Spengemann earned a degree from the University of Toronto, then went onto Osgoode Hall Law School and eventually received a doctorate from Harvard Law School.

Just before being elected in 2015, Spengemann was a senior UN official in Baghdad with the United Nations Assistance Mission for Iraq.