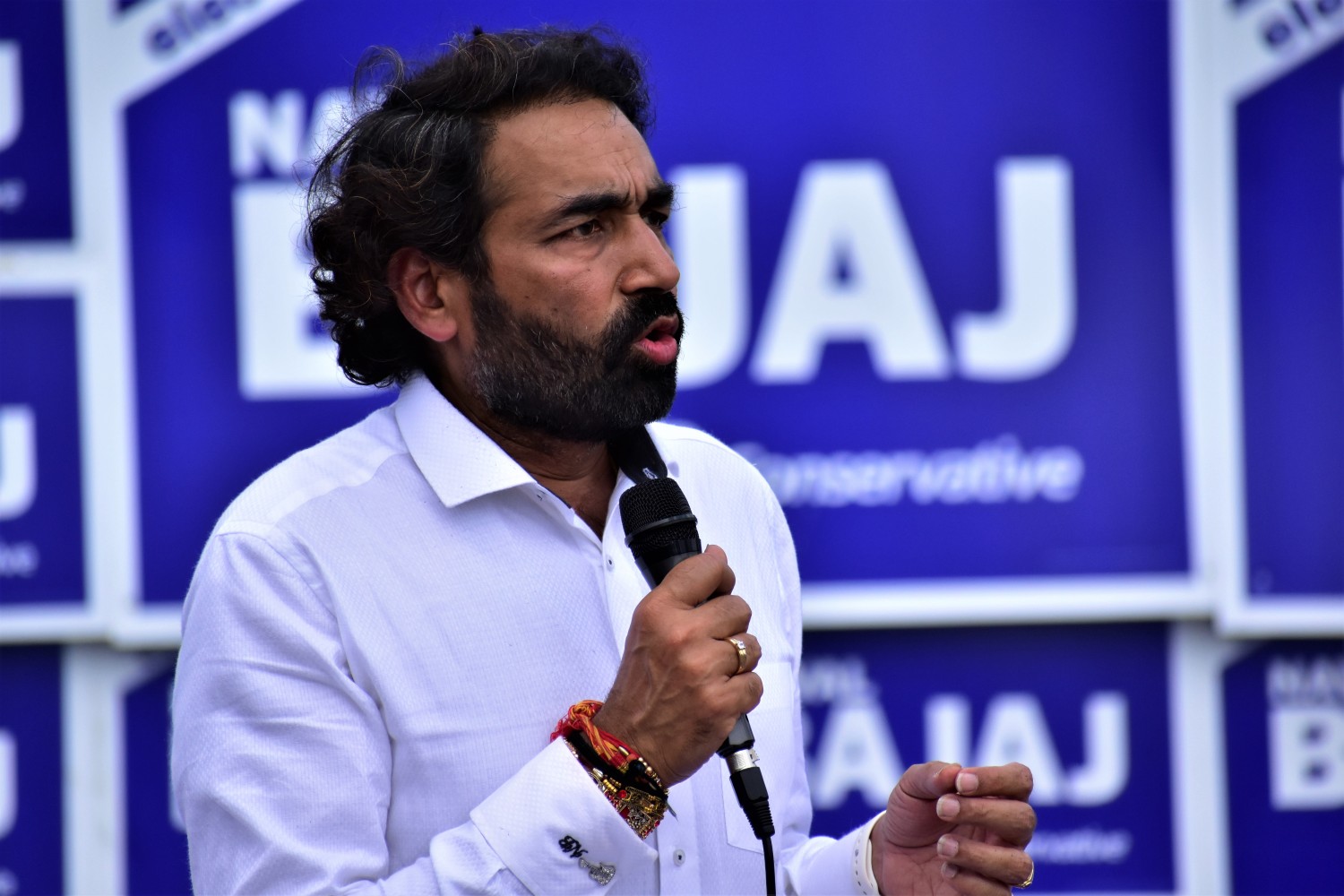 High schoolers in matching blue, red or orange t-shirts chat behind tables filled with food and coolers stocked with bottles of water to battle the scorching heat. Community elders sit in the shade of hastily erected gazebos, while current and former politicians earnestly greet anyone who hovers before them.

These festive political gatherings held in plaza parking lots mark the launch of local campaigns in the contests for Brampton’s five federal seats. The events are a unique expression of community unity and partisan politics.

On August 29, it was Conservative Brampton East candidate Naval Bajaj’s turn to launch his campaign.

Against a backdrop made of election signs held together by tape, a selection of former and current conservatives greeted those gathered under the late summer heat. They told assembled supporters that Bajaj was the man to move the riding of Brampton East forward in Canada’s 44th Parliament. 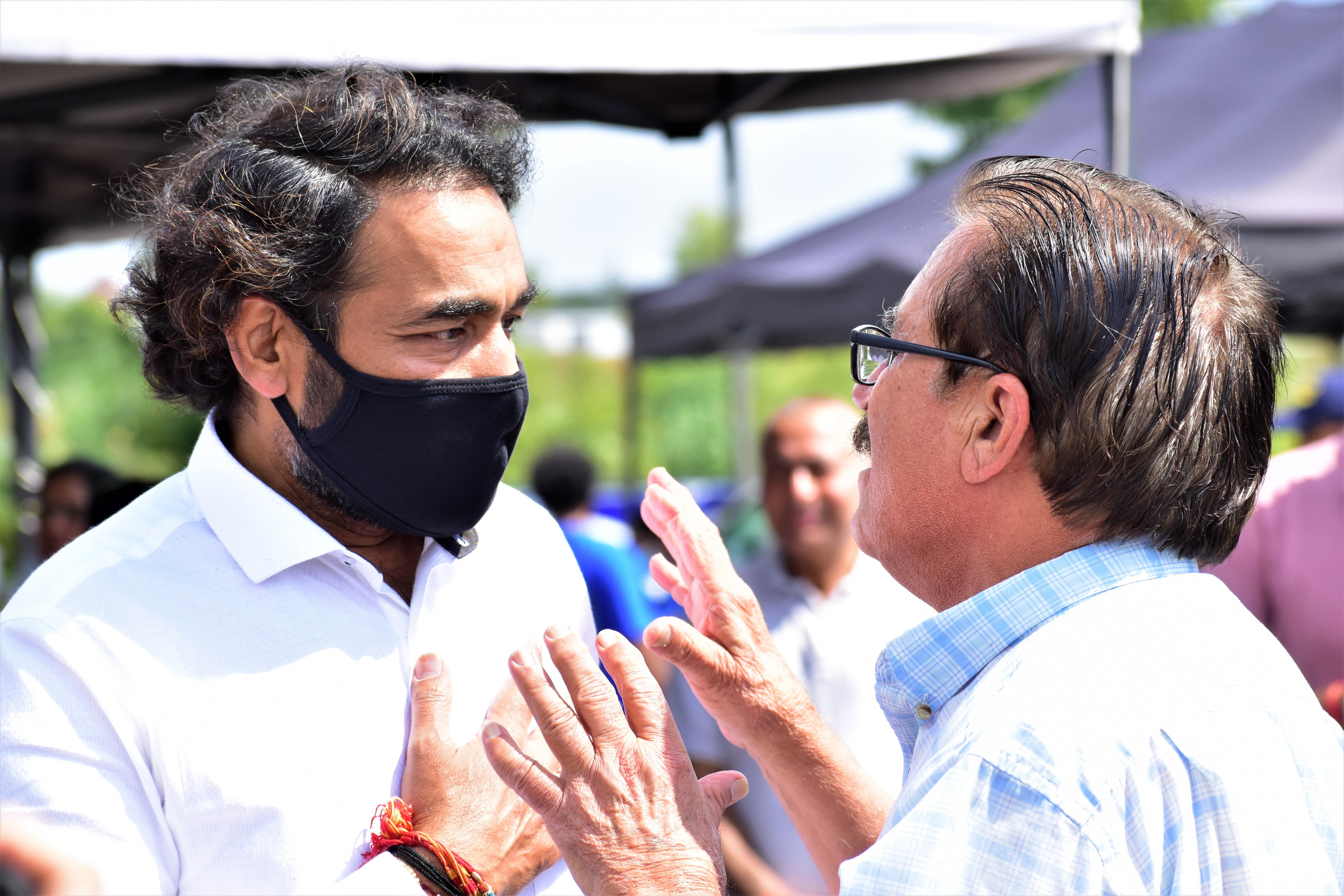 This is Bajaj’s second attempt to win a Brampton seat for the Conservatives. He also ran in 2015 against eventual winner Raj Grewal, who was removed from the Liberal caucus in 2018 after walking back a commitment to resign due to a gambling problem. In 2015, Bajaj only received around 10,000 votes compared to more than 23,000 cast for Grewal, in what proved to be a resounding Liberal sweep of Brampton and Mississauga under the party’s new leader at the time, Justin Trudeau.

He was unsuccessful in his bid to secure a Progressive Conservative nomination ahead of 2018’s provincial election. He now says he is ready to represent the riding he lives in on Parliament Hill, where he feels the Liberal Party has had, and squandered, its chance to rule.

Bajaj has a background in business and commerce. His bachelor's degree, like many political hopefuls, was in law before he began studying for a masters in engineering and then moved onto business administration instead.

According to a profile in the Canadian Immigrant, his business background includes working as a consultant for 7-Eleven. Bajaj helped advise the corporation on how to grow its operations in Canada.

Asked about his background, Bajaj keeps it simple. “I have been most in the retail industry”.

The Brampton East candidate’s track record on international business relations between Canada and India is a key area of experience his campaign is keen to highlight. He is the former president of the Indo-Canada Chamber of Commerce (ICCC) and the experience gained negotiating relationships between businesses in India and Canada could help reap rewards for his riding, where 56 percent of all immigrants were born in the sub-continent’s largest country, whose almost 1.4 billion residents represent the import and export potential of future commercial relationships between the two countries.

Bajaj’s campaign website boasts that he secured the ICCC’s headquarters, a building in Toronto, when he was president, an achievement that could translate to future investments in Brampton as well. His philanthropy is also not exclusive to his home city, having raised funds for Toronto General Hospital and Scarborough General, along with Brampton Civic.

“I am hard-pressed to think of one country where our relationship today is better than it was six years ago and no more can that be the case than with Canada-India relations,” John Baird, former Conservative minister of foreign affairs who has been attending candidate events across the GTA, told supporters at Bajaj’s launch. “We had a strong, great relationship with Prime Minister Modi and the Government of India… That’s why we need Naval, so we can get along better with India.”

The Conservative star power in attendance was an indication the party thinks the riding is winnable. Liberal incumbent Maninder Sidhu performed poorly in his first two years as an MP, failing to advocate effectively for his riding after his nomination in 2019 raised questions about how the unknown candidate secured his name on the ballot with no experience in public office and very little indication of any work done in the community. The NDP nominated a strong candidate in the riding as well, Gail Bannister-Clarke, well known for her broad experience in education. 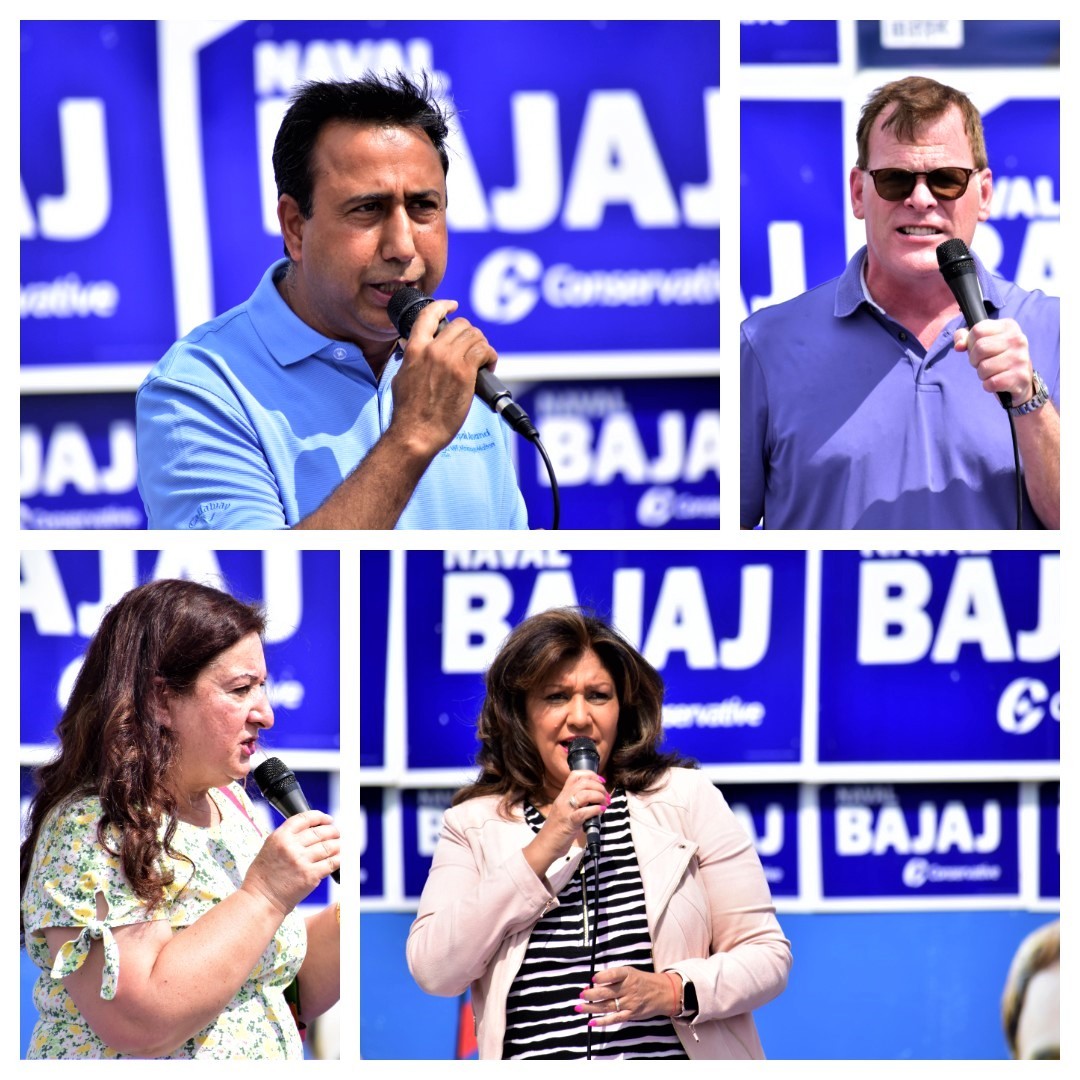 His international experience is something Bajaj says he wants to bring to Ottawa. The candidate stresses his commitment is to Brampton, but he also wants to be included in key policy conversations about international relations and trade to benefit all Canadians, if he wins on September 20.

In every riding, it is these local issues that matter the most.

Party leaders and the cabinet, backed by an army of civil servants, are tasked with the intricacies of foreign affairs, while individual members of parliament bring a local lens. Housing, local immigration priorities or public transit fall under the care of individual representatives.

The City of Brampton is pushing a very specific list of projects. City Hall wants an $850 million commitment to extend the Hurontario LRT north into downtown, $250 million for a rapid transit route along Queen Street, $75 million to electrify a bus storage garage and $42.2 million for enhanced active transportation networks to get people out of their cars. Bajaj is vague on the details of how he will deliver on these demands but says that he will do “whatever” it takes to secure “as much funding as possible” for Brampton.

As he knocks on doors in Brampton East, hoping to win in a riding the Conservatives finished third in last time, he is offering a pragmatic pledge. He does not promise to change the world overnight, but will advocate for an area he believes, like many of his fellow constituents, is being left behind.

“It’s not that the solution is going to be [in] the first 100 days, I cannot say that, but at least [I will be] laying [Brampton’s needs] on the table,” he says. “[I will] work with honourable Erin O’Toole, the prime minister, to make sure... we are ready to deliver all the promises that are being made.”