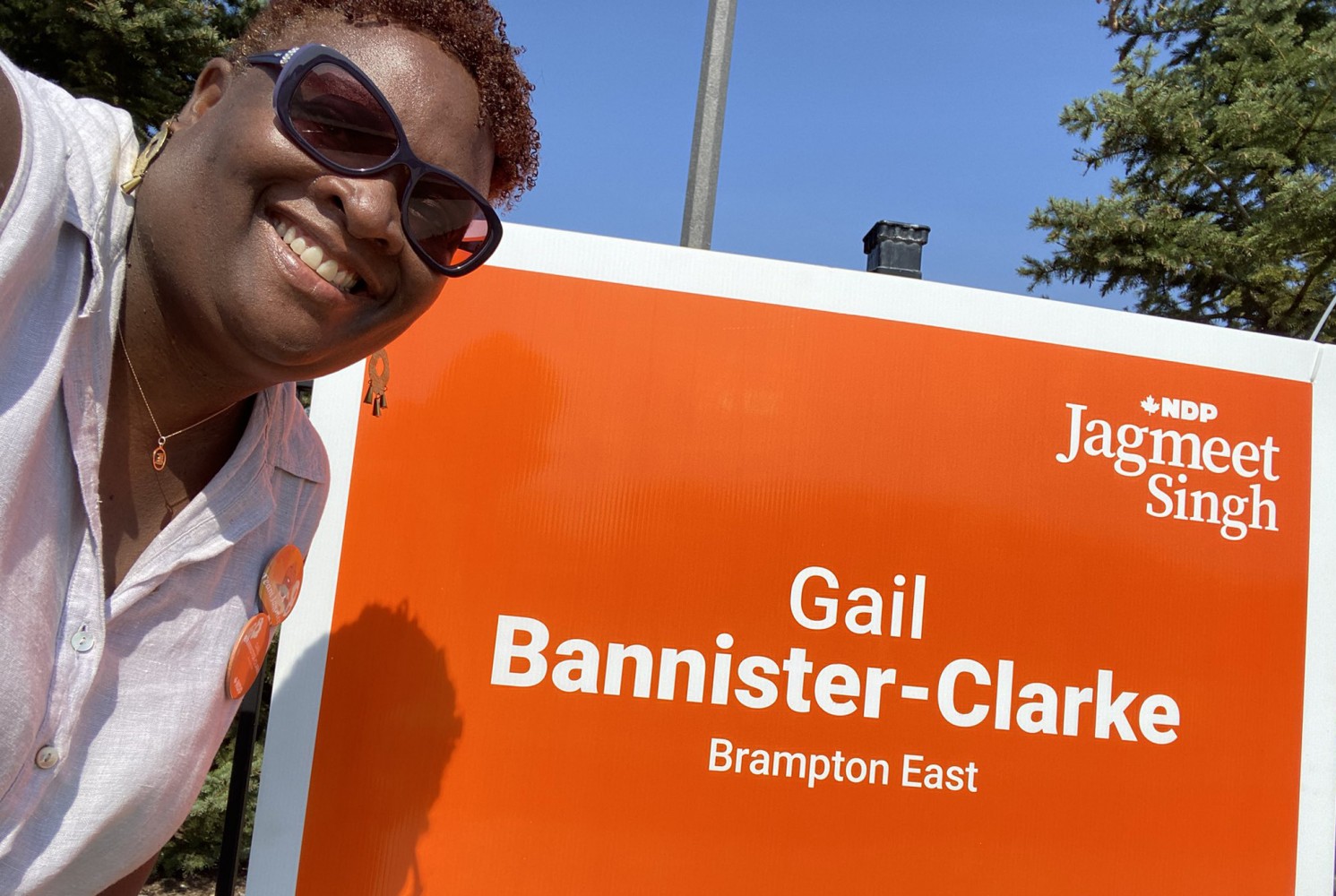 Canvassing in the oppressive August heat, Gail Bannister-Clarke has heard from many Bramptonians who say they have simply had enough of being neglected.

The NDP candidate for Brampton East, and president of Peel’s local Elementary Teachers’ Federation of Ontario (ETFO) union, says the basic needs of Bramptonians — frontline healthcare access, help with rising prescription drug costs and pathways to secure housing — are being ignored by the city’s Liberal members of parliament. If elected, she vows to change that.

Bannister Clarke is challenging incumbent Maninder Sidhu, a rookie MP elected in 2019 following the resignation of Raj Grewal after his gambling problems. Naval Bajaj is running for the Conservative Party of Canada and Manjeet Matharoo for the People’s Party. The Green Party does not have a candidate in the riding.

The slow trickle of funding to Brampton has been a point of contention between local councillors and the city’s federal representatives in the past. In November 2018, Grewal — who later resigned — told The Pointer that “At the end of the day, the buck actually stops with council.” He pointed to dysfunction around the council table at the time and said a lack of funding applications received from the City was the reason why money for critical infrastructure needs was not flowing into Brampton. Ahead of the 2019 election, Brampton’s funding from the Liberal government’s multi-billion dollar Investing in Canada Infrastructure Plan (ICIP) was dwarfed by the funding allocations of other large Canadian municipalities. Despite having five MPs as part of the Liberal majority government, the city received only $40.3 million dollars between 2015 and 2019. By contrast, the City of Edmonton received $1.9 billion. Brampton North MP Ruby Sahota claimed during the 2019 campaign that there was a disconnect between City Hall and local MPs, with those in Ottawa being unaware of applications being sent for them to advocate on.

The needle has slowly started to move in the right direction over the last two years with the federal government pledging approximately $166 million to the City through the ICIP since 2019. However, the funding remains contingent on the local municipality being able to deliver on its share, and is still just a small fraction of what Brampton’s per capita funding should be.

Bannister-Clarke says regardless of the level of funding, it falls on local MPs to ensure that the systems are working properly to connect Ottawa and Brampton so a fair share of dollars coming back to the city’s federal income-tax payers continues to flow.

“It absolutely begins with the MP,” she says. “Even if someone else isn’t doing their job, I think it’s up to the MP to ensure everyone is doing their job.”

Prior to the pandemic, which turned Brampton into a COVID-19 hotspot, the city was grappling with a number of crises that were putting the health and wellbeing of its residents at risk, including a dearth of emergency healthcare services, a lack of in-patient hospital beds at the city’s lone full-service hospital, an opioid crisis that has rapidly worsened in recent years, claiming more lives in 2020 than ever before, and a housing crisis that sees rentals and ownership out of reach for 80 percent of Peel residents.

“They have so many needs and those needs are not being addressed,” Bannister-Clarke says. 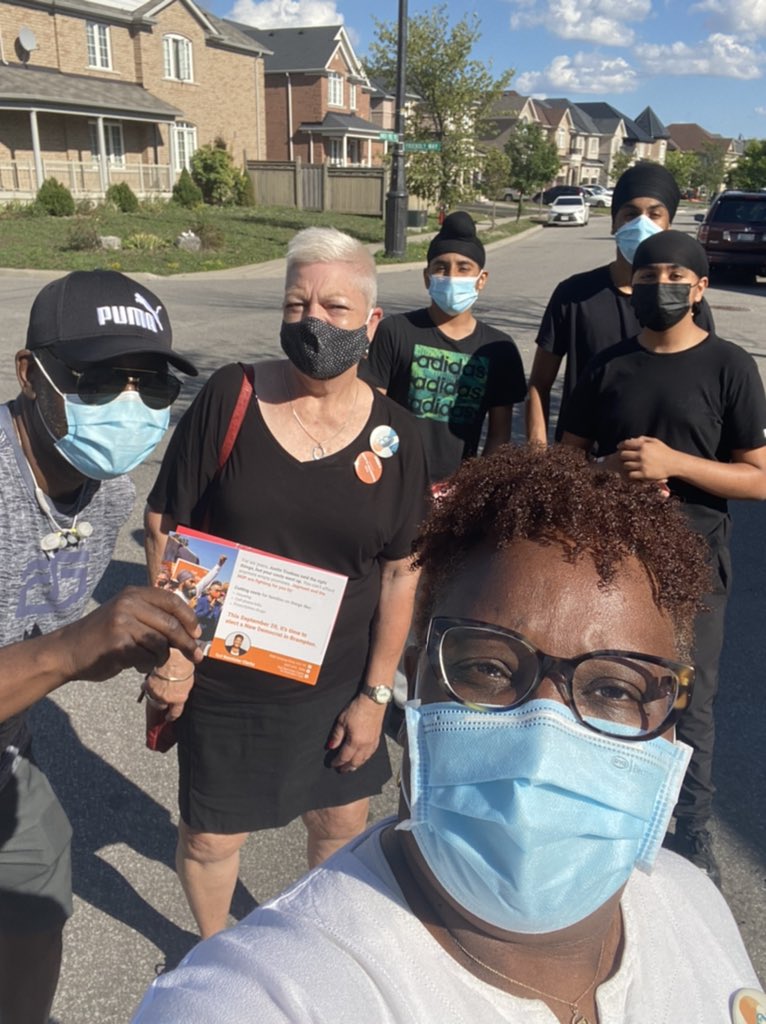 Beginning her teaching career with the Peel District School board in 2006, she was elected to the ETFO provincial executive in 2015, and is the first Black president of the Peel Elementary Teachers’ Local. She served as PETL’s chief negotiator, chair of the status of women and constitution committee and worked in the organization’s mentorship program for women. Throughout the pandemic, the ETFO has pushed the provincial government for more resources to make schools safe for students to learn during the ongoing pandemic.

It all combines to create a professional body of work and complex experience that would serve her well in Ottawa, she says.

“Going through the pandemic and working in my position as president of the Peel teacher’s local, I really saw how Brampton was under-served by the government and as we headed into this election realizing that we have had six years of Liberal MPs here in Brampton, who haven’t put us on the map, they haven’t brought our concerns to Ottawa,” she says. “I’ve had a lot of experience navigating at different levels and strategizing and networking in order to accomplish what was needed.”

Bannister-Clarke has called Brampton home for over 30 years and raised two kids in the city. If elected, she hopes to maintain that connection with the community through practical measures that allow her constituents to contact her directly, as opposed to questions and concerns being filtered through different channels or staff members.

“I am the sort of person who returns calls.”