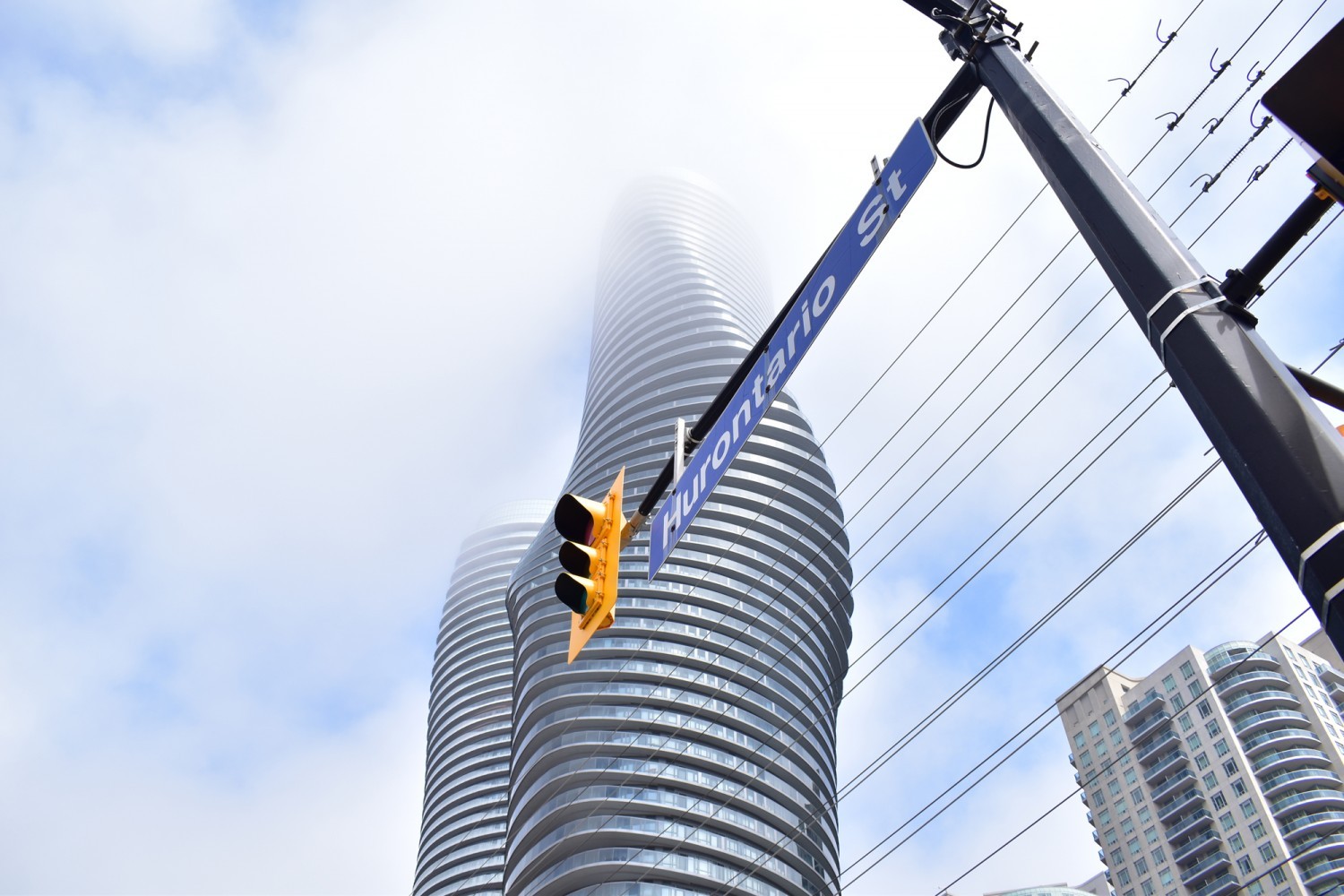 Image from The Pointer files

The City of Mississauga is calling on parties and candidates looking to win any of its six seats in September’s federal election to commit to a wide-ranging list of priorities. Staff and councillors are reprising the Mississauga Matters campaign, rolled out during the 2018 provincial and 2019 federal elections, to push for specific promises to move crucial city building forward.

Priorities include big-ticket transit projects like funding the Hurontario LRT loop around downtown, cancelled by the Ontario PC government, and two-way, all-day service on the Milton GO line.

“Mississauga needs a committed federal government partner to provide consistent, predictable, direct and long-term funding to allow us to build Mississauga into a world-class city and effectively recover from the effects of the COVID-19 pandemic,” a May 2021 staff report outlining the strategy explained.

Funding for the Port Credit Marina, public parks and active transportation are part of the campaign. As is a bus rapid transit route along Dundas Street and resources for zero-emissions transit. More general housing policies and significant business support for post-COVID recovery plans will be pushed forward too.

Federal dollars are key to Mississauga’s future growth. The municipal government is responsible for a huge infrastructure portfolio, including roads, community centres and libraries, much of which is rapidly aging. Plans to move towards a transit-oriented future, develop a world-class waterfront and keep municipally-owned facilities in working order all heavily rely on funds flowing from higher levels of government.

“Municipalities own 60 percent of all infrastructure in Canada, yet only receive nine cents of every tax dollar collected, compared to approximately 44 cents for the province and 47 cents for the federal government,” the City’s staff report says. “Municipalities like Mississauga need the federal (and provincial) government to provide more long-term, predictable funding for infrastructure.”

As a rapidly growing community, Mississauga is at a crossroads.

More than half of the City’s infrastructure was built at least 30 years ago and is in desperate need of repairs. Ambitious plans to green its transit fleet, increase public transport usage through convenient rapid transit lines and end Mississauga’s reliance on the car cannot be achieved through debt-financing, development fees and the property tax alone.

The City is currently awaiting the result of applications for federal support to build the Dundas BRT and green its bus fleet. Other requests like the downtown loop are key to its future, but don’t qualify for an existing federal grant. 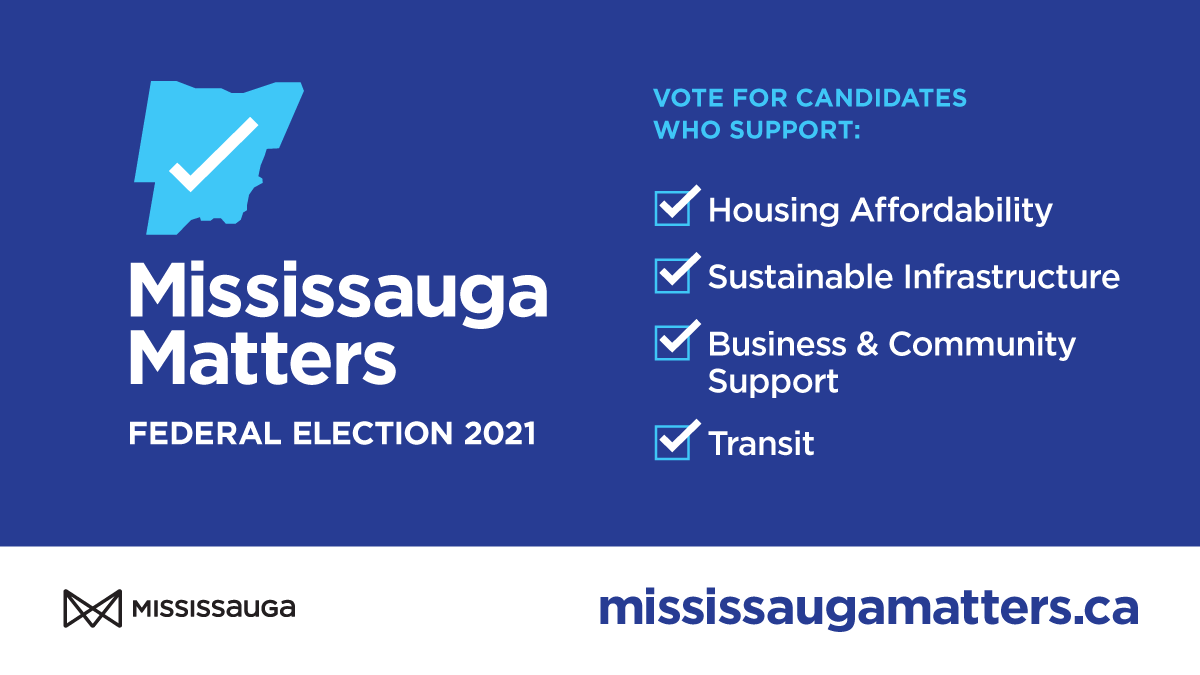 Mississauga Matters, the City’s attempt to ask for its fair share, is being blasted across social media, promoted through paid advertising and open letters, among other options. One tactic to test local candidates' commitment to Mississauga is missing: a city-wide debate.

“The City is preparing for a Mississauga Matters candidate and resident info session (not a debate),” a spokesperson told The Pointer. “We will be issuing an advisory once details are confirmed.”

The education session will be a virtual format that puts no pressure on candidates to make commitments if elected or answer the questions of residents. Instead, an online event will be hosted by City staffers to lay out their priorities and candidates will “be invited to submit questions” to learn more about local needs that desperately rely on federal funding.

Candidates will not appear on screen and they will not be questioned by a moderator, councillors or residents.

Mississauga’s decision to host a generic education session online instead of putting candidates on the spot during a debate comes after it was forced to cancel its Mississauga Matters debate in 2019. Almost two years ago, the municipality quietly called off its debate, scheduled to draw attention to demands from election hopefuls. The cancellation came after local candidates failed to sign-up.

The only successful Mississauga Matters debate was held in 2018, when provincial candidates for the Greens, Liberals, NDP and Progressive Conservatives squared off on topics related to bettering the City.

“We have sent briefings to all local candidates and to the leaders,” Mississauga Mayor Bonnie Crombie told The Pointer at a Thursday press conference. “This is only a 36-day election and we are in the midst of a pandemic and we’re worried about so many things right now, including our new vaccination policy here at the City, so this wasn’t something that we had planned to do.”

Liberal leader Justin Trudeau’s decision to set the election for September 20 has left parties scrambling to nominate candidates and cities without the time to maximize advocacy. The truncated timeline has reduced the ability to advocate effectively, including organizing municipal debates, arguably limiting the effectiveness of the democratic process.

The minimum length for a campaign is 36 days and the maximum is 50, according to Elections Canada.

A spokesperson said the City would “follow up” with candidates in the next few weeks about the briefings sent to them, suggesting no local responses have been received. 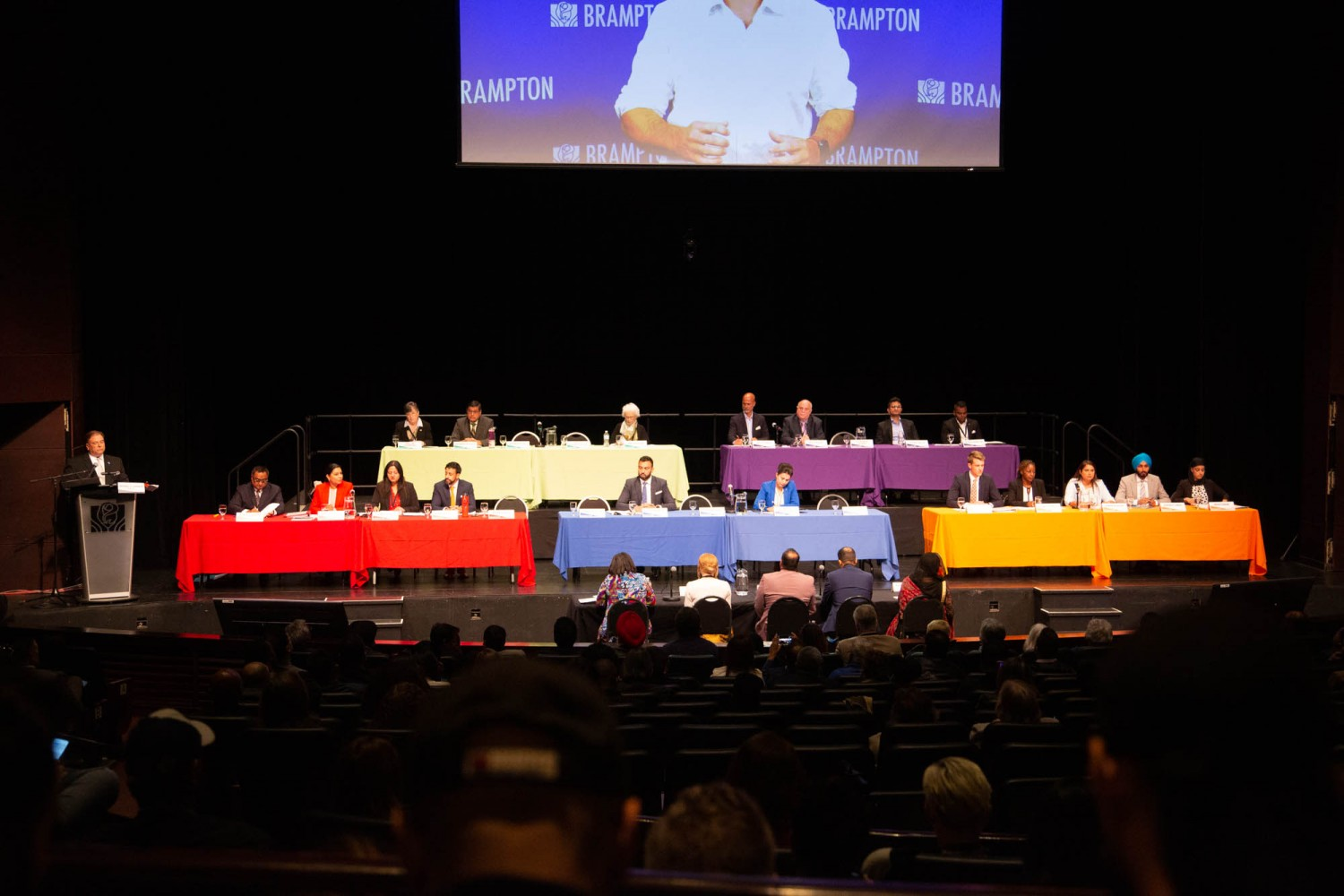 In 2019, neighbouring Brampton successfully organized an all-candidate debate at the Rose Theatre.

Conservative leader Erin O’Toole is the only party leader who has responded to Mississauga’s demands so far. His reply to an open letter from Crombie broadly outlines relevant policies in his platform, but fails to make any specific commitments to the city. Throughout his response, O’Toole mentions Mississauga 10 separate times without identifying any of the City’s local asks.

“Canada’s Conservatives are committed to improving public transit in cities across the country, including Mississauga,” reads one of several boilerplate responses.

The NDP did not confirm if Jagmeet Singh had responded to Mississauga’s letter in time for publication and the Liberals provided a general response.

“The Liberal Party of Canada understands how important it is to work in partnership with municipalities to build a better Canada for everyone,” a spokesperson wrote. “We will continue to work with Mayor Crombie.“

Mississauga’s decision not to host its own debate does not mean residents will be without a chance to see candidates discussing their city before casting a vote. The Mississauga Board of Trade (MBOT) has organized a virtual all-candidates debate over Zoom for September 10. The event will be free for residents to watch online.

“As per previous practice, we follow the same criteria set by the Leaders’ Debates Commission, with one candidate representative per party across the six Mississauga ridings,” Trevor McPherson, MBOT President and CEO, told The Pointer.

Further details, including which candidates have confirmed participation, will be revealed as the date approaches. 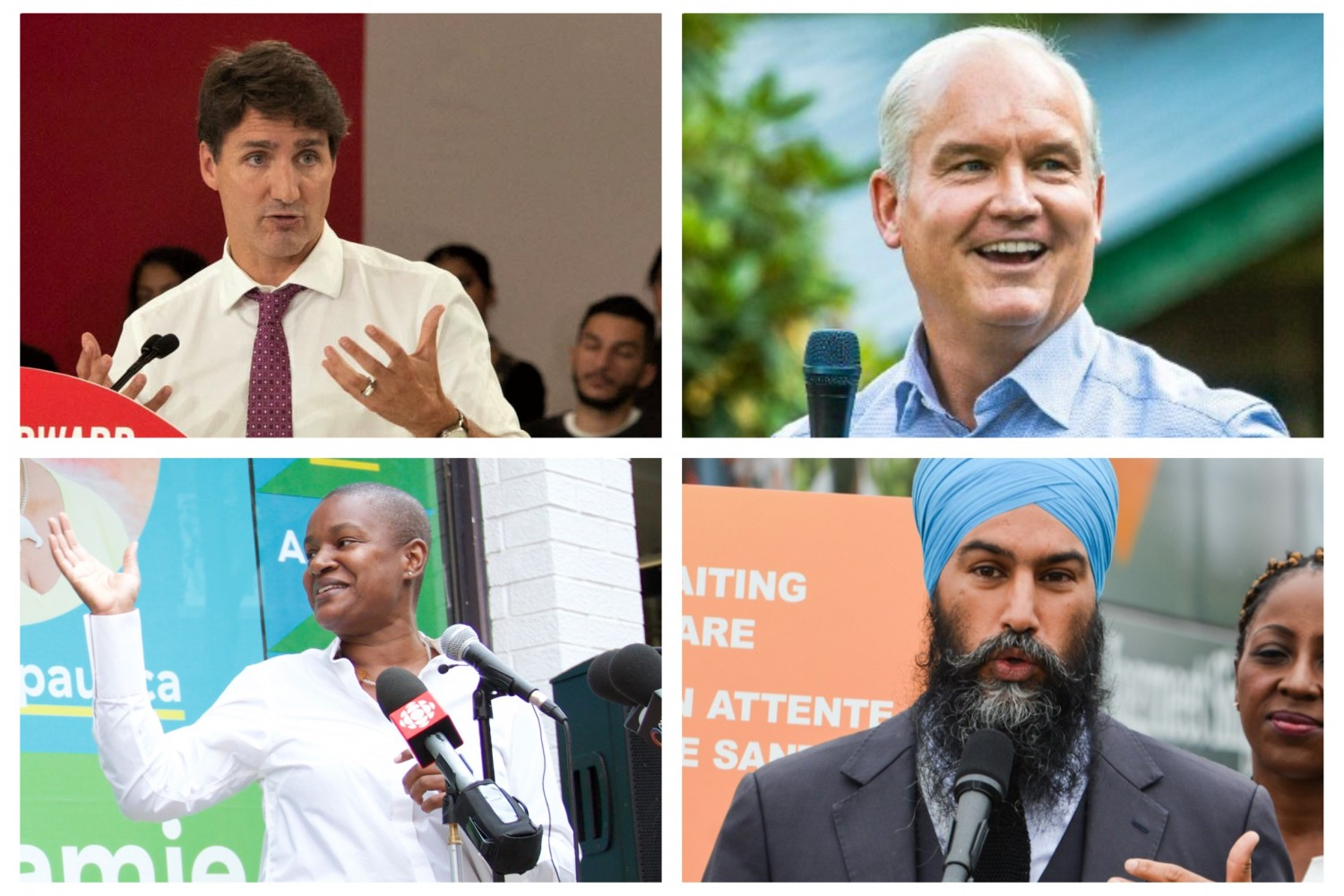 (Image from The Pointer files, Erin O'Toole-Twitter/Green Party of Canada)

Without a debate of its own, the City is relying on business-as-usual advocacy tactics. One such plan will be to produce paid and organic social media engagements to raise advocacy issues to the top of mind for voters.

The City has spent $797 on Mississauga Matters Facebook advertisements so far, according to the platform’s advert library. A total budget of no more than $35,000 has been set for the entire campaign, which will include paid advertisements in local and cultural media. The Facebook campaign has yielded a reach of up to 105,000 people.

It is unclear if the City’s current approach will bring success.

Educating candidates and asking for their commitments through briefing and open letters lacks the immediacy of a debate and leaves room for centralized campaign teams to respond instead of the various candidates themselves. O’Toole’s response, the only meaningful engagement the campaign has achieved so far, shows how easily candidates and leaders can dance around the issues in writing instead of during a live debate.

Despite rolling out its Mississauga Matters campaign and imploring candidates to buy in, City Hall has been somewhat distracted.

Peel’s mounting fourth wave and Mississauga’s new vaccination policy - asking all staff to be vaccinated by Halloween or face regular testing - have occupied the organization. Council, which met briefly this week, is still officially away for the summer.

The brief election campaign period means the City has been unable to juggle its immediate priorities and the long-term importance of securing federal commitments.

“Because of COVID we have been consumed with proof of vaccination, proof of vaccination policies and our operational deficit and getting our message out - the Mississauga Matters messages out - to the candidates that are running here in Mississauga,” Crombie said. “We had not turned our attention to hosting an online or virtual debate.”