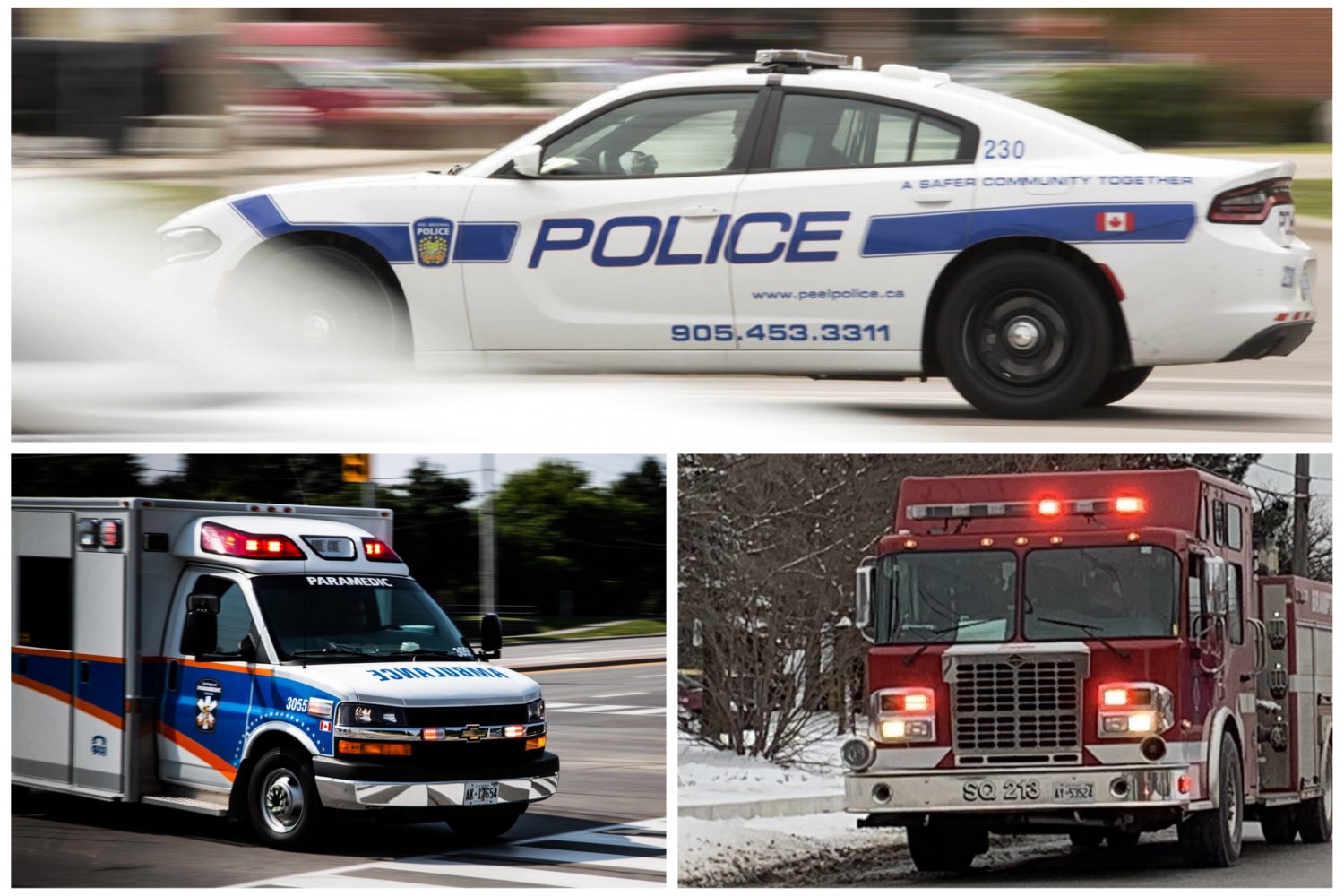 Trained dispatchers try to keep the conversation calm. By the time a call ends, one of the three emergency services will be preparing to race through city streets under flashing lights and a blaring siren.

The services they provide often overlap. Firefighters are often the first responders on the scene of a medical incident or car crash, while the role of police as first responders to mental health crises is well documented. Paramedics arrive first in an acute medical emergency, such as a heart attack or COVID-related problem.

First responders in Peel work for a range of different bodies to provide help to residents when they need it most. In Caledon, the Ontario Provincial Police (OPP) and the Caledon Fire and Emergency Services team respond to fires, crashes and some medical calls. Local fire services do the same in Mississauga and Brampton, while the Peel Regional Police handle everything from break-ins to murders. The entire region receives medical support from Peel Paramedics.

Emergency services are supposed to be offered to residents without bias, with each body properly funded to keep Peel residents safe. But the politicians and bureaucrats who craft and deliver budgets in Peel have not allocated public resources for first responders on a needs-based principle. Significantly more local tax dollars are lavished on the Peel Regional Police than either Brampton or Mississauga fire, while the paramedics are left with relatively little compared to funding for police over the last few years. 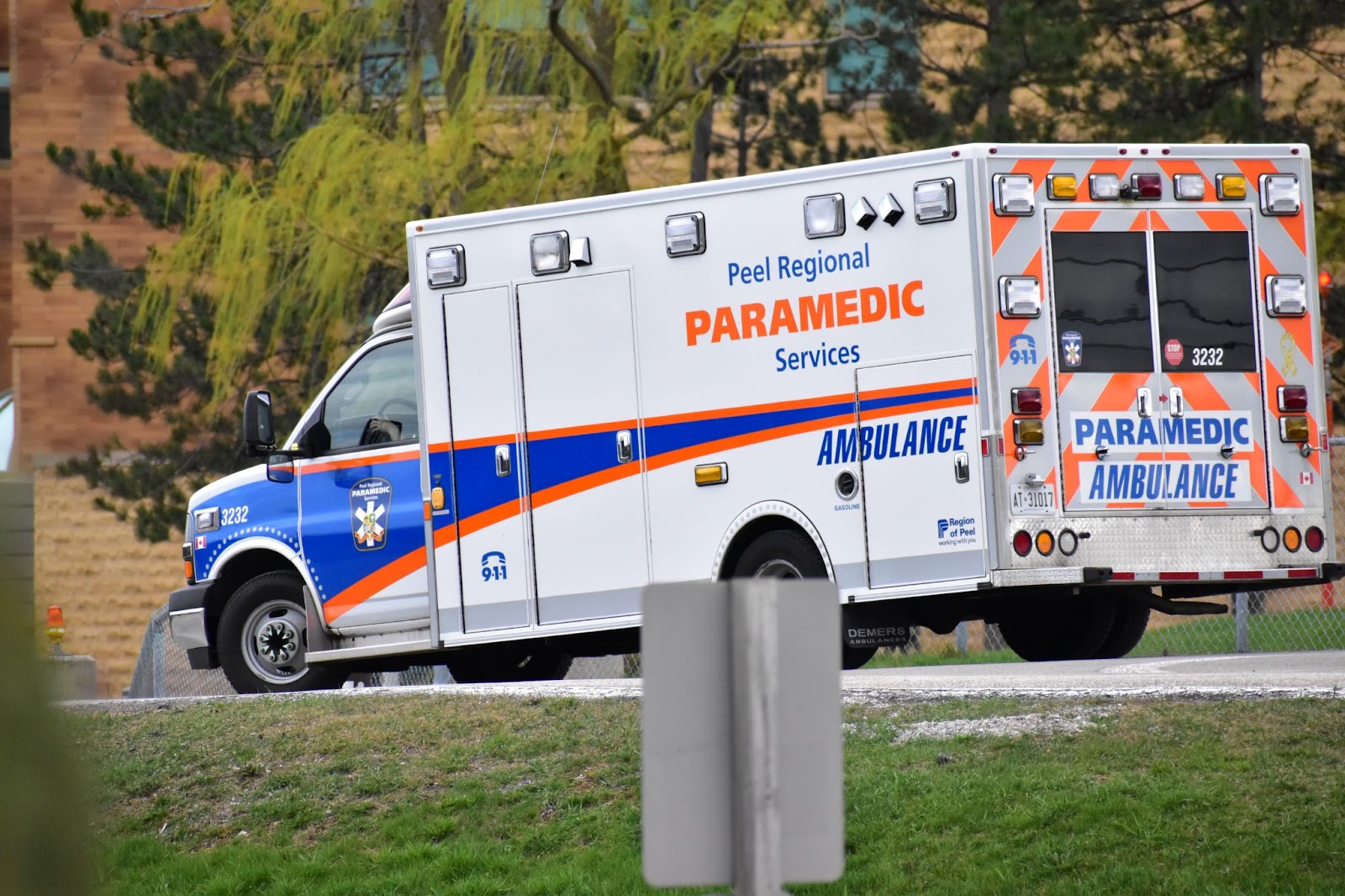 An analysis by The Pointer of emergency service budgets in Brampton and Mississauga over the past six years shows the vast majority of public dollars for the three arms of the emergency service goes to the police service.

Calculations are based on net operating budgets after revenue or grants are factored in, while capital budgets reflect funds from development charges, property tax and municipal reserve accounts. Figures used are the proposed budgets approved each year (The Pointer consulted documents from 2016 to 2021) to capture the figures accepted by elected politicians. The actual annual cost of running emergency services can vary based on factors such as the number of emergencies, cost of fuel or level of overtime worked.

Peel police receives more calls and has a broader mandate than the other two emergency services, however, the rate of increase for its budget has outpaced the fire and paramedic budget.

The total 2021 budget for the Peel Regional Police was more than half a billion dollars, with an operating budget of $462.5 million and a reserve-funded capital budget of $56.4 million. The large public expenditure means the service cost $394.53 per capita in Brampton and Mississauga based on figures from the 2016 Census.

Fire services in Brampton and Mississauga cost less than half the per capita cost of policing. This year, Brampton Fire averages $143.16 per resident for its operating and capital budget, while Mississauga Fire comes in at $184.99. Peel Paramedics, which receives a particularly significant portion of funding from the Province, costs just $66.05 per capita.

Over the past six years, budgets for all emergency services have increased above the rate of inflation. 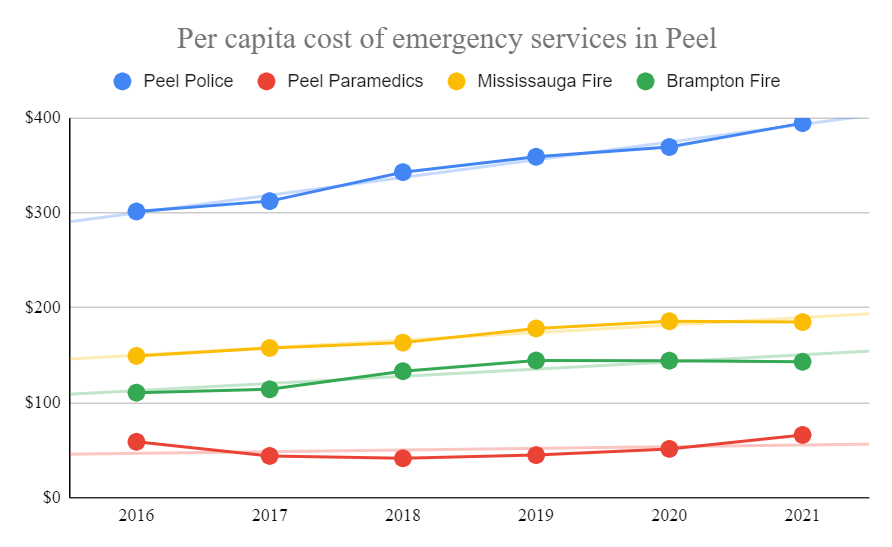 Police are the most expensive per capita service in Peel Region.

The overall Peel Police budget has increased 31 percent over the past six years.

Calls to significantly reduce police funding are unrealistic in Peel, where 94 percent of the police operating budget is tied into wages and benefits linked to union contracts.

Current labour contracts are not open to renegotiation, and the police services board does not have the power to cut or freeze salaries at its discretion. The provincial government is able to issue an order to freeze public sector salaries, including police, but even if the unlikely scenario unfolded it would not impact existing labour costs.

The current contract for officers sees a first class constable start at $100,420 representing a 41 percent increase from the $71,400 starting salary in 2006. The deal is backed by the powerful police union, which would undoubtedly fight strongly against any effort to freeze salaries or reduce staff levels. 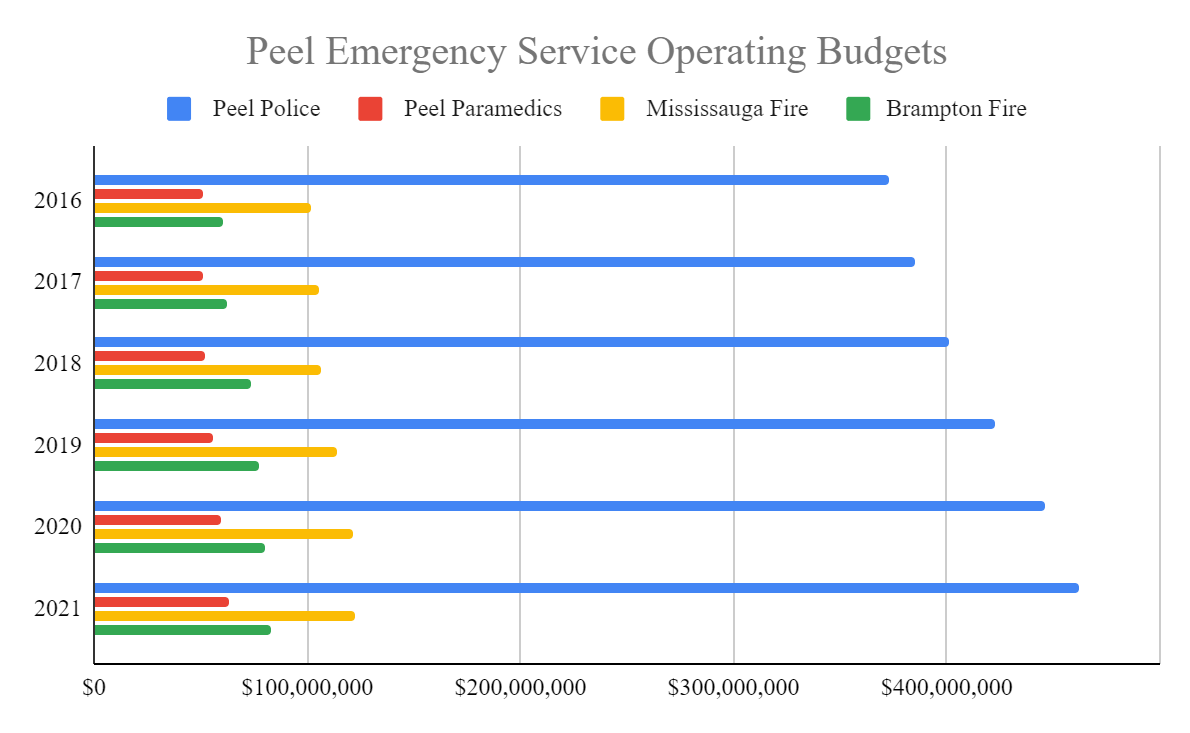 The operating budgets for all emergency services in Peel have grown steadily since 2016.

As around half-a-billion dollars per year have poured into policing, other emergency services have suffered. Paramedics are starved of infrastructure dollars, the City of Mississauga’s fire department faces a hefty building and repair bill, which has been neglected for decades, and the emergency response time for the fire departments in both cities is well below the national standard.

It’s a “dramatic pace” Paramedic Chief Peter Dundas previously told The Pointer and will require significant investment. Projections show a needed capital investment of $139.6 million between 2021 and 2030 in order to add new reporting and satellite stations and expand the ambulance fleet to be able to effectively respond. 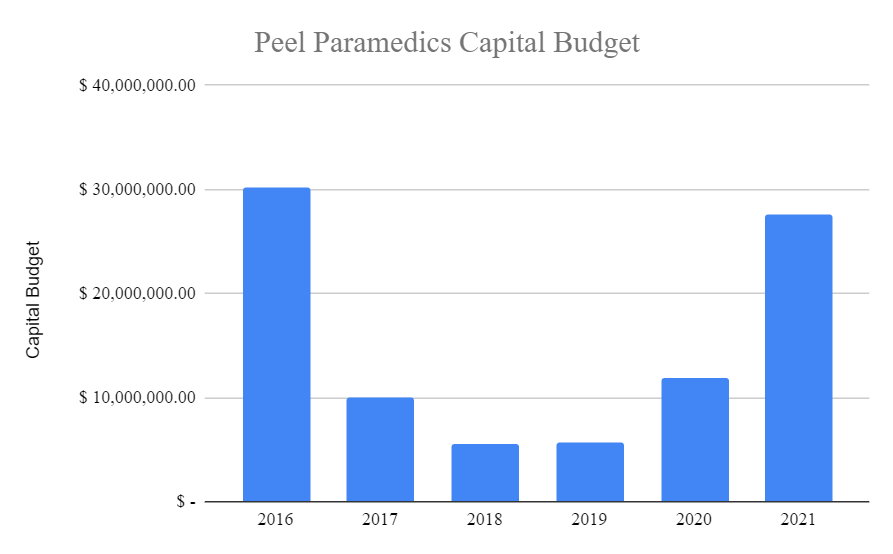 The paramedic capital budget has varied massively over the past six years.

Brampton Fire’s expanding operating costs have been offset by its reduced capital budget, which was slashed to just $2.4 million in 2021, compared to $11.5 for Mississauga Fire.

The former has kept investment to a minimum over the past six years, never budgeting more than $8.2 million for its capital costs in a year. The 2021 budget saw even its limited investments drop further. In 2018, the service’s capital budget increased by 10 percent, rising a further 39.5 percent the following year. In 2020, the capital budget was slashed by 32.3 percent and it fell again by 56.1 percent this year. 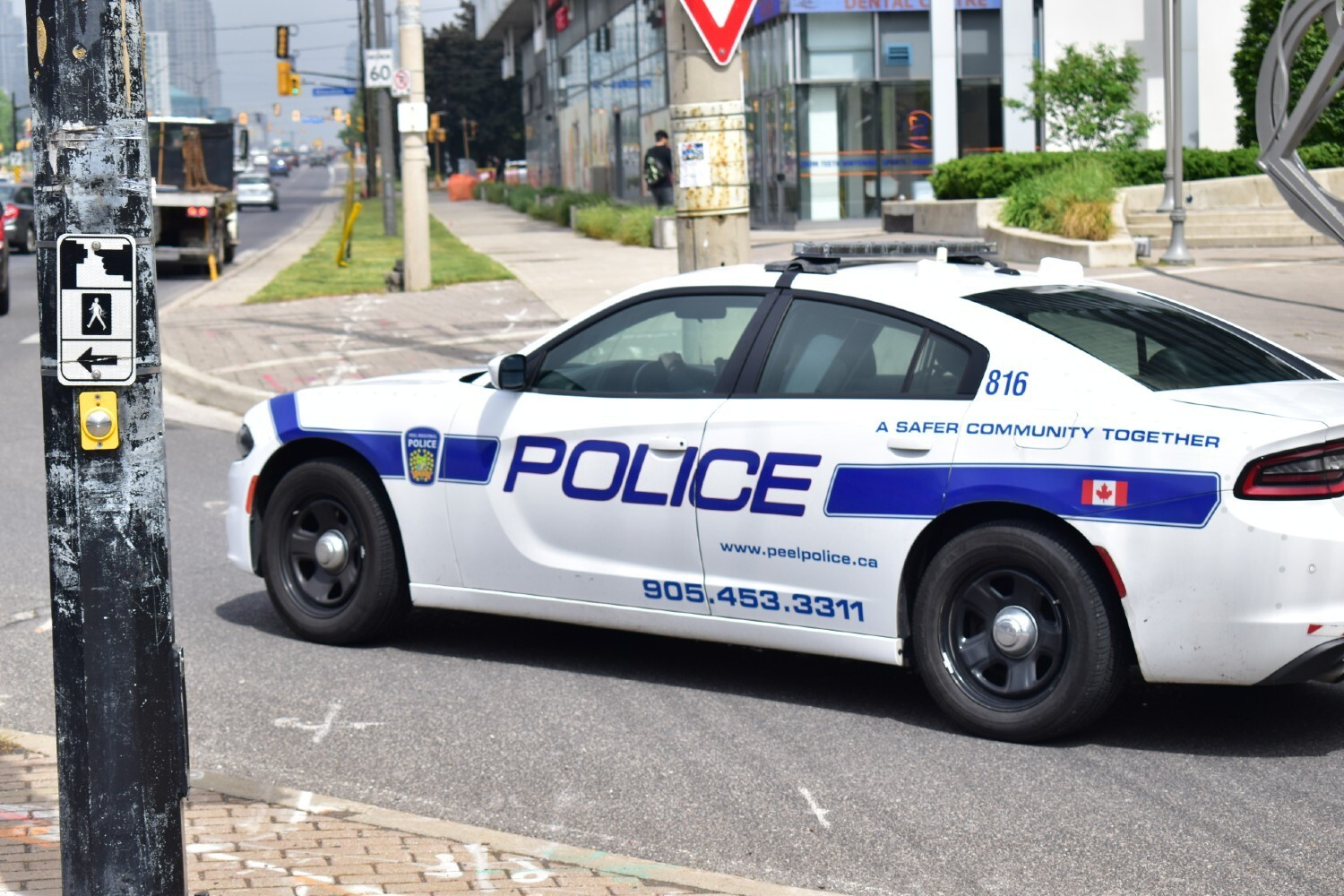 To the south, Mississauga offers a cautionary tale for Brampton about underinvesting in fire infrastructure. After decades of ignoring the pressing need, choosing to invest public dollars in other priorities, councillors were forced to approve $66 million in repairs to 17 fire stations over the next decade and budget for multiple new fire stations that should have been built many years ago to keep up with population growth. This neglect will lead directly to a one percent budget increase every year up to and including 2026.

Mississauga has roughly half the number of fire stations it needs to meet basic standards. The lack of new fire stations, which is directly linked to inadequate response times in the city, came because staff and councillors decided not to prioritize the projects. Tax dollars were spent elsewhere and the rate of budget increase kept to a minimum.

“With competing capital funding needs across the City, a balance was required to fund fire stations, roads, community facilities, and maintain state of good repair of the City’s many assets,” Shari Lichterman, former commissioner of community services and current chief financial officer for the City of Mississauga, previously said.

These “competing” needs include policing, which receives an outsized share of public funding in Peel, while fire and paramedic services make tough choices about the level of service they can provide with what’s left for them.