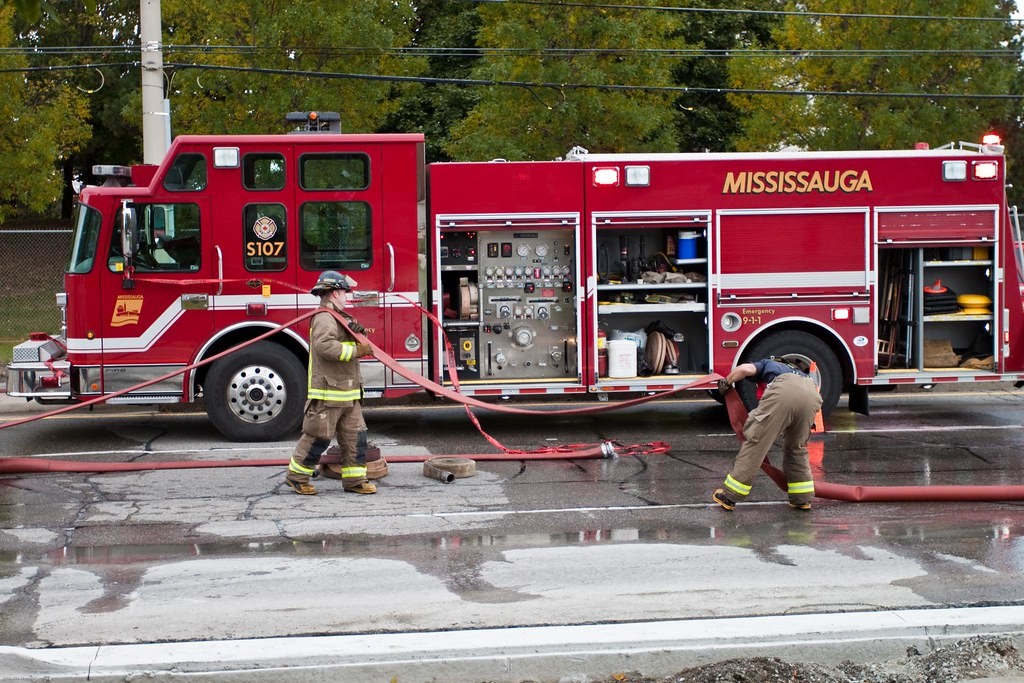 The City of Mississauga is facing an eye-watering repair bill across the next decade to fix its aging fire stations, many of which have not been renovated since they were built decades ago.

A staff report included on the agenda for the City’s budget committee Wednesday was received by councillors without comment or question. It outlines the extensive taxpayer funding that will be required across the next several years to bring upgrades to 17 of Mississauga’s 21 fire stations.

In total, $66 million is needed across ten years to renovate and upgrade at a rate of two fire stations per year. To minimize the impact on Mississauga’s fire service, stations in close proximity to one another will not be renovated at the same time. 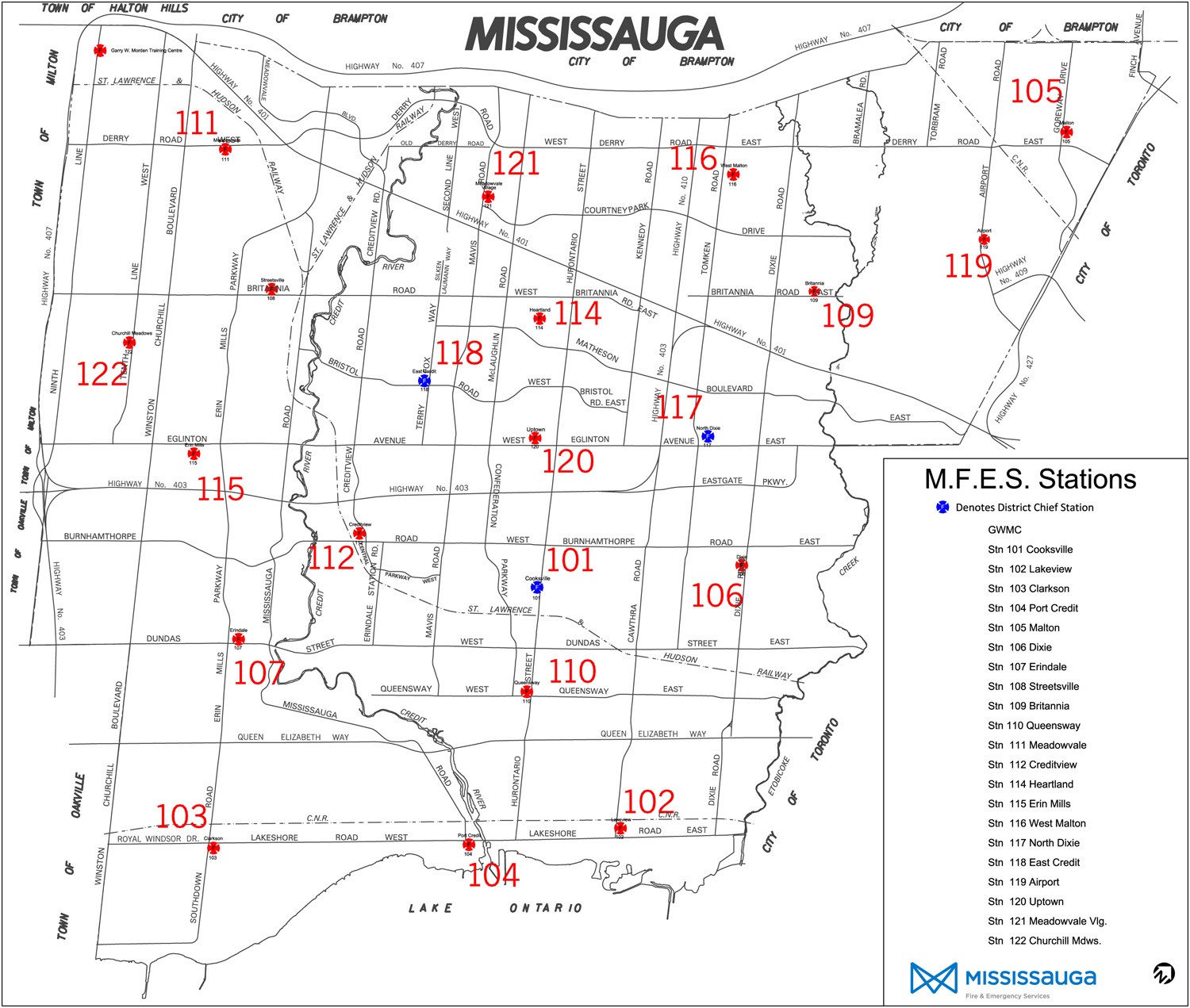 A map of Mississauga's fire stations

The fire department is planning to use two recreational vehicles to house firefighters when renovations mean they have to vacate their building. Stations with two fire trucks will see one crew move to a neighbouring station and another staffed from inside the two RVs.

The cost for each station ranges from $1 million to as high as $8 million, with the most urgent work to be started in 2022 or 2023 at Station 102 and Station 108 in Lakeview and Streetsville, respectively They have not had significant work done since they were first built in 1979 and 1980. By the time they receive their upgrades, the two buildings will have gone more than 40 years without a major change.

In total, 13 of Mississauga’s 21 fire stations (62 percent) were built more than 30 years ago and have not had a major renovation since the ribbon was first cut. In that time, standards have changed dramatically and, even aside from the issue of aging infrastructure, frontline buildings constructed in the 1970s or 1980s are not fit for purpose in their current form. 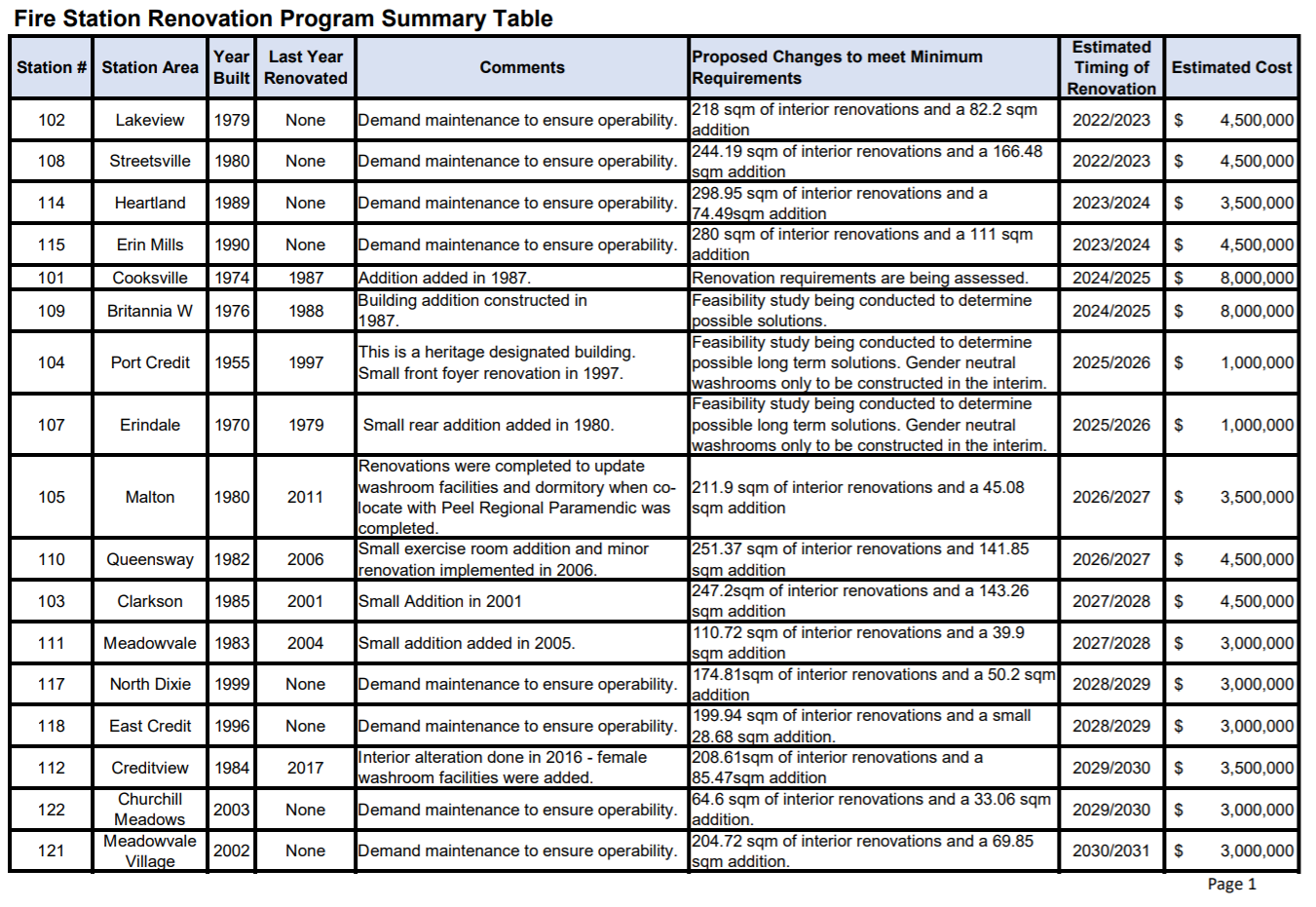 The list of fire station upgrades staff prepared, including price and timeline.

There are several examples of the issues brought on by years of neglect.

One relates to the Mississauga Fire and Emergency Services’ 39 frontline female firefighters who do not have changing rooms or bathrooms at eight of the service’s stations. That figure means 38 percent of Mississauga’s fire stations have no facilities for the female firefighters who put themselves in the same dangerous positions protecting residents as their male colleagues.

Another factor is the growing body of research that shows higher rates of cancer among firefighters compared to the general public. In order to minimize exposure to fumes and carcinogens, fire station design now demands carefully separated ‘hot’ zones for crews heading to an emergency or tooling up and ‘cold’ areas for firefighters to eat, sleep and perform administrative duties. A transitional zone, or an airlock, is also necessary to keep the two separate.

“New design recommendations include proper storage and ventilation for contaminated personal protective equipment in a separate room with isolated HVAC to allow for off-gassing to be exhausted to the outside,” the staff report explains. 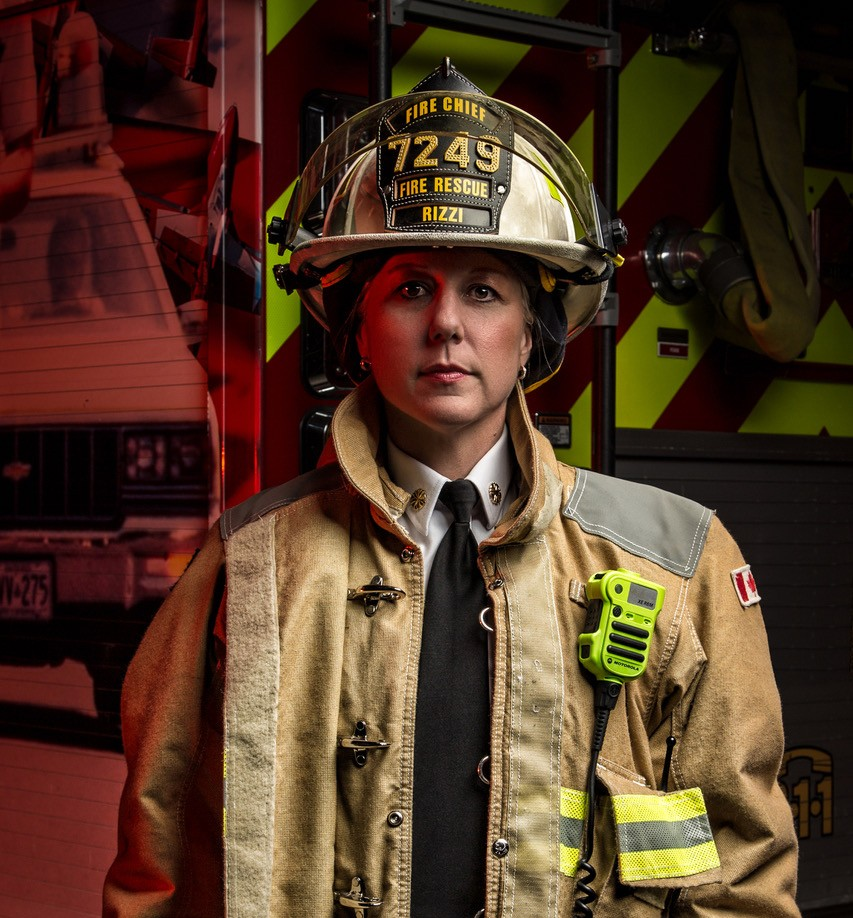 Much of the background for the infrastructural renewal strategy was informed by a building condition audit completed in May 2019. In the audit, which The Pointer reported on in a three part series, numerous issues were detailed with fire stations, including a roof past its lifecycle and windows with significant gaps.

In total, the audit of 14 fire stations suggested repairs would come to $31.4 million, with three fire stations unable to meet standards without starting from scratch. The audit also documented asbestos in nine fire stations the City had known about since at least 2009.

Subsequent communication from the City revealed 11 fire stations have asbestos.

Fire union boss Chris Varcoe, who represents Mississauga’s firefighters, had previously been frustrated by the revelation asbestos is present in the City’s fire stations, saying he had been “assured repeatedly” that the buildings were “free from asbestos”.

He was told about the new changes last year and said he was glad to finally hear progress is being made to deal with the invisible threat that has hung over his members for far too long.

“I think that our voice has been heard now,” he told The Pointer late last year, when the commitment to removing the asbestos was made alongside discussions to finally upgrade the deteriorated facilities. “The management group that is in place today is taking this concern seriously,” he said at the time. “While we haven’t removed any asbestos yet, we’re confident that they’re moving in the right direction and we look forward to continuing to work with them.”

Plans under the Fire Chief, Deryn Rizzi, and commissioner of community services, Shari Lichterman, focus on more responsive leadership that will see attention paid to the aging stations. The 2019 audit called for regular inspections of some of the City’s older stations to ensure structural safety and two regular inspection teams will now be in place to keep an eye on issues. A planned facility maintenance schedule will be in place, along with an annual condition assessment, both of which will be completed by City staff.

The Province is also mandating cities to develop formal asset management programs for all infrastructure to avoid situations of long-term decay.

When The Pointer revealed the audit, few at City Hall were willing to engage with the information. Lichterman had been in her role for a matter of months and Rizzi was still the Vaughan Fire Chief.

Councillors Carolyn Parrish (Ward 5) and Ron Starr (Ward 6) were the only elected officials to respond to multiple requests for comment. Former Fire Chief Tim Beckett was not made available for an interview and Mississauga Mayor Bonnie Crombie only commented on the audit when pushed at a press conference. 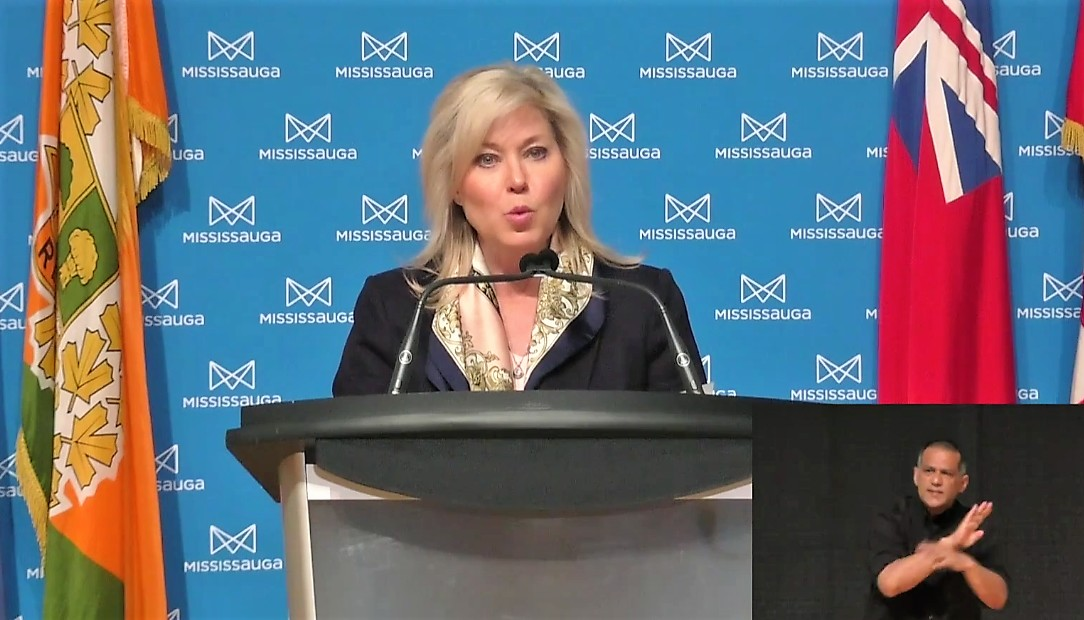 Mississauga Mayor Bonnie Crombie was asked about the audit during a press conference.

“We certainly have a fulsome 10-year capital plan,” Crombie said, when asked in October 2020.

Now, the same capital plan will have to expand significantly to accommodate the desperately needed repairs. Under Rizzi, the list of fire stations in line for renovations across the next decade is 17, with asbestos also due to be removed from the 11 fire stations where it is present.

“This is a team effort and a lot of this has happened because of Shari [Lichterman]’s leadership,” Rizzi told The Pointer. “Before I even came in the door, things started turning around.”

Funding for the renovations will come from extending the one percent public safety reserve tax levy.

The 2021 budget planned to end this additional levy in 2025, but it will now be extended. It was originally set up to fund six vital new fire stations across 12 years and new staff positions for education. The levy stems from the 2019 Fire Master Plan and is designed to introduce the infrastructure and education necessary to improve Mississauga’s significantly delayed emergency response times.

Attempts to keep the tax rate low due to the pandemic during the last budget season meant it was suspended for 2021.

In order to pay for the repairs and upgrades required at 17 Mississauga fire stations, which have been ignored by leaders for years, the levy will be 1.75 percent in 2024 instead of 0.5 percent, continuing at 1 percent in 2025 and 2026. It will end before 2027.

These figures do not include costs to rebuild Fire Station 104 (Port Credit) or Fire Station 107 (Erindale), both of which cannot be renovated to standards. Station 109 (Brittania), previously believed to be beyond upgrading, will be subject to a budgeted $8 million renovation. A short-term cost of $1 million for each station is budgeted to improve the facilities, but the City’s real estate team is currently searching for new land for Station 104, while 107 will also require a rebuild. These figures will also need to be budgeted in future years.

Lichterman says the City is still “willing to invest” in these buildings in the short-term to improve issues such as gender neutral washrooms.

“We went from having three as a placeholder in the 10-year plan to 17 — plus the new stations,” she said. “We are building a lot of infrastructure in 10 years, I think this is lightning speed.” Fire Station 108, which contains asbestos, has not had a major renovation since it was built in 1980.

The cost, important to maintain this infrastructure, will add a heavy burden to budgets for the next few years. Combined with the City’s ongoing two percent infrastructure levy, it guarantees a base increase of three percent will be baked into each new budget, even before staff salary increases or new capital projects are taken into account.

“It is going to be difficult going forward over the next few budget years to incorporate a whole lot of new initiatives over and above that… we’ll adjust the plans based on the amount of funding we get, but this is our best thinking being brought forward to council,” Lichterman said. “We’re feeling their support so far and that’s what we’re counting on.”