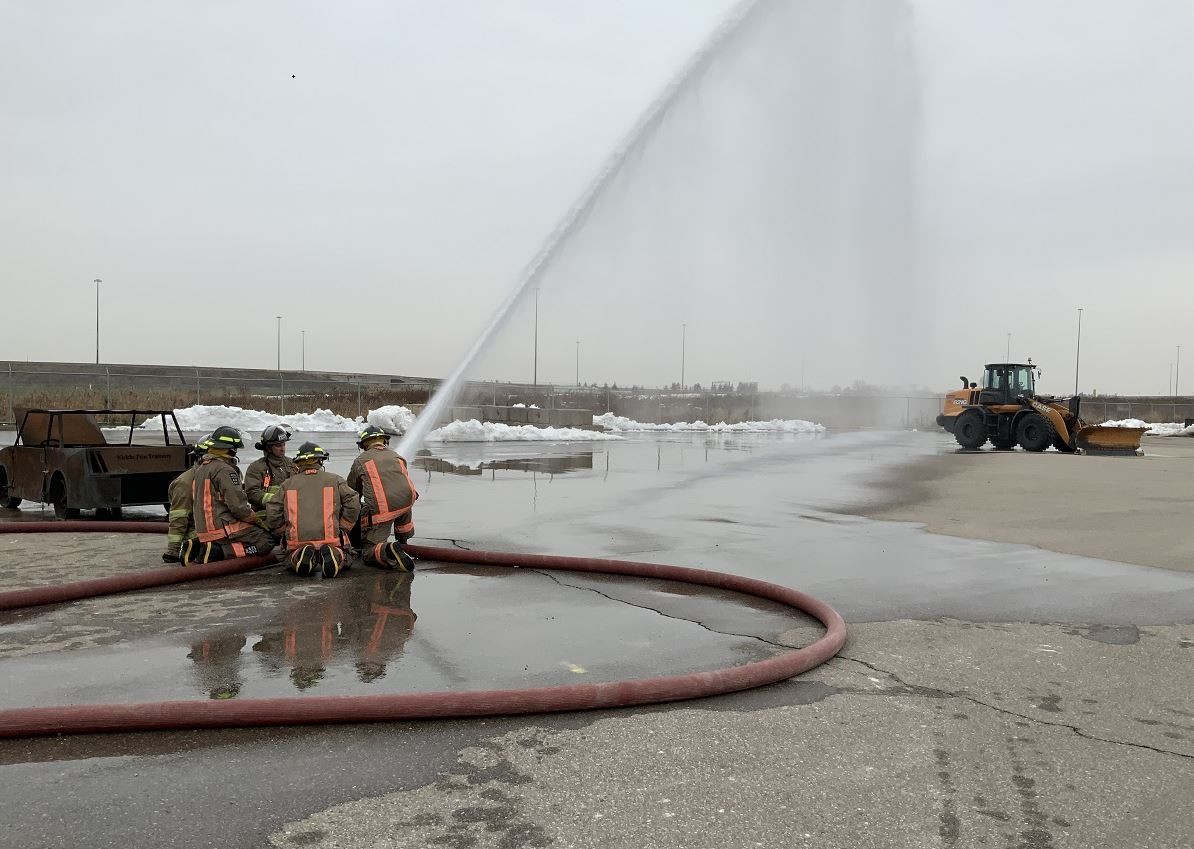 The images of Mississauga in years to come are stunning.

The city’s waterfront has been opened up to the public and painted with modern architecture, while the wasteland of parking lots around Square One has spawned gleaming glass towers that rise to the sky.

Hurontario Street boasts a sleek and modern LRT, while Dundas Street has its own rapid transit corridor shuttling residents from east to west and back again. The air is clean and Mississauga has become a destination for everyone.

Renderings of the future of Mississauga's waterfront, like those created for the Lakeview development (above), paint a beautiful picture, but is it achievable with the city's aging infrastructure?

Those renderings of Mississauga in the next ten to twenty years are exhilerating, inspiring and creative, but they’re relatively easy to conjure. A talented graphic designer and an urban planner with half an imagination can easily create the beautiful mockups, specifically designed to draw pre-construction down payments and other investments into the projects.

In the short term, there is a huge obstacle to this vision. Years of underinvestment in rapidly aging infrastructure have taken their toll and the city faces a laundry list of urgent problems it must tackle before it can really embrace its future.

Nowhere is this neglect more apparent than the fire service.

At $122 million, Mississauga Fire and Emergency Services (MFES) makes up 22 percent of the City’s net 2021 operating budget. The service is proposing a modest increase of two percent in its operating budget, driven largely by labour adjustments in its union contracts, which are already set.

Despite its status as the single greatest expense Mississauga taxpayers bear, the service is woefully below its required response times and has buildings in a desperate state of repair. Difficulties as a result of COVID-19 mean education and enforcement plans designed to reduce call outs and offset terrible response times have also been delayed.

Figures included in the 2021 budget refer to 2019, the last year for which a complete dataset is available.

In 2019, the number of fires the City responded to grew, after falling slightly in 2018. Last year, there were 167 residential fires and 384 in buildings of all kinds. According to staff, a comparison of data from 2018 and 2019 shows a significant increase of 19 percent in unintentional fires related to mechanical or electrical failures. 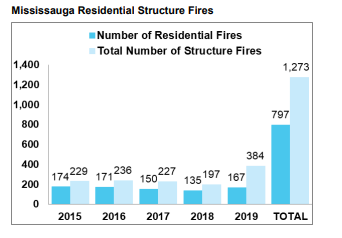 The risk of hard-to-fight fires will only increase in the years to come. Already, the city is home to 340 buildings exceeding a height of 18 metres, a point at which they are deemed “high risk” by firefighters. With massive high-rise projects on the planning horizon, such as Oxford Property’s 37-tower Square One development, that number is going to go up with every passing year.

A risk assessment completed by MFES found industrial fires were another key worry for the city. Only 1.9 percent of property in Mississauga is industrial, yet 12 percent of fire loss takes place in these settings. “This is significantly higher than the provincial average and higher than expected given the actual number of industrial occupancies,” the budget says. 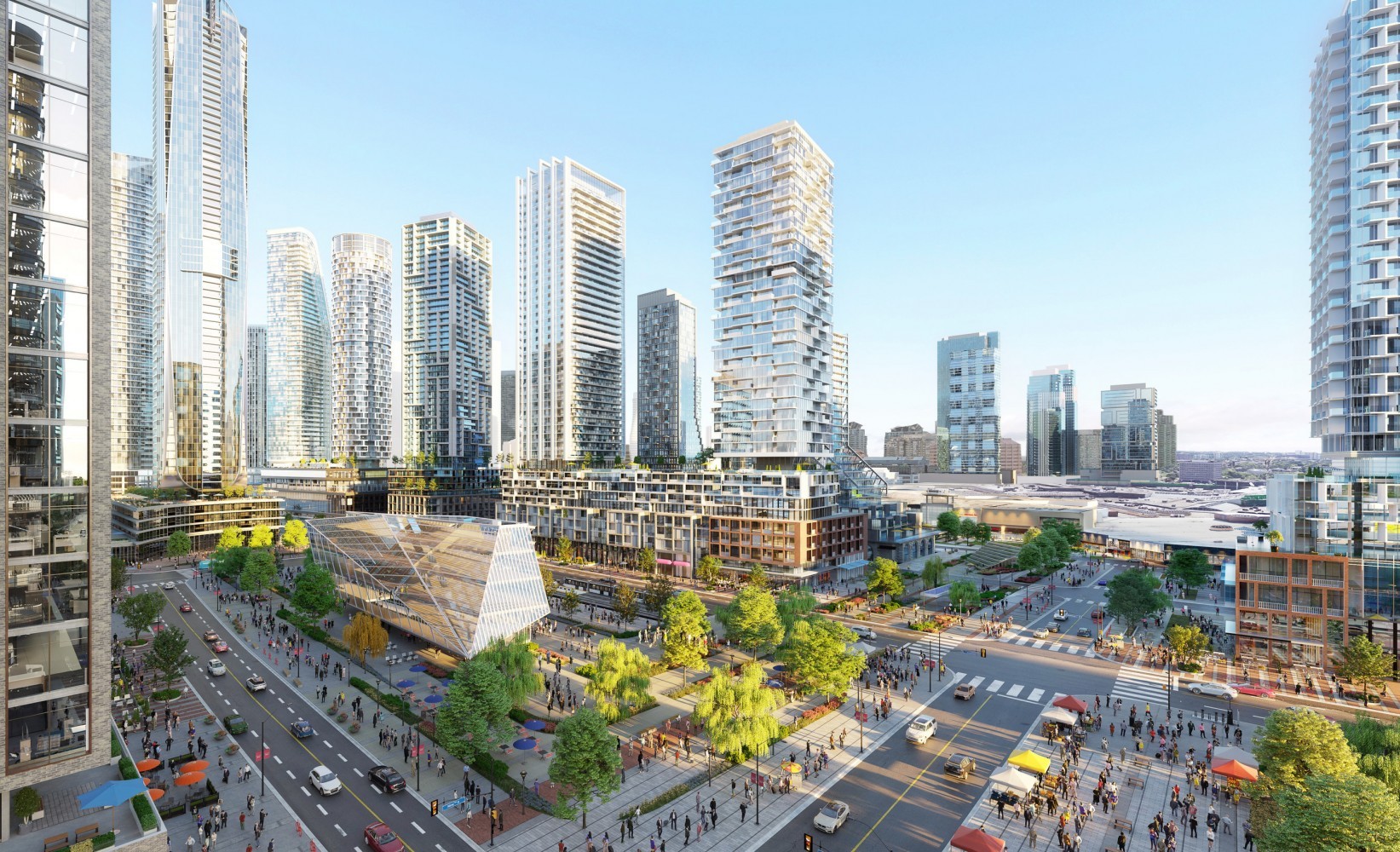 Even with the increase in fires, the number of calls attended by the service was down in 2019. An unlabeled chart in the budget document shows calls significantly below 2018 levels, after years of consistent increases. 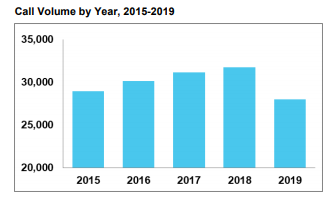 Mississauga Fire’s central and well-documented failing is its response time. The National Fire Protection Association (NFPA) sets a target for the first vehicle to arrive at a fire within 384 seconds of a call coming in 90 percent of the time. To achieve this, the standard target is 240 seconds (four minutes) for travel time.

For years, Mississauga has failed to hit this target. In 2019, the department admitted defeat and asked council to lower its target to 240 seconds 75 percent of the time instead of 90. On its internal metrics, MFES does better, but on both fronts 2019 saw travel times barely improved from the previous year and concerningly far from their targets. Mississauga’s plan to close the gap is two-fold.

The first pillar is a capital program to add six stations over 12 years. The first of these was opened in 2019, with strategic locations identified to attempt to reduce callout times by targeting underserved areas and reducing how long trucks spend in traffic.

The Public Safety Reserve levy, designed to raise funds to buy land and build these new stations, was collected in 2020. For 2021, the City has put it on hold “to assist in managing the 2021 tax impact,” but says it will not have an effect on construction. A delay in acquiring land for Station 124 means the costs will fall into the 2022 budget instead.

As The Pointer has previously reported in a three part investigation, the City’s problems go beyond its need for new infrastructure. Fourteen of Mississauga’s 21 fire stations are more than 20 years old and some are in desperate condition. Three cannot be upgraded to meet standards and will need to be rebuilt from scratch, while City documents also show at least nine stations have asbestos in them.

The internal audit that informed The Pointer’s reporting estimated $31.4 million to get the 14 stations up to standard, excluding the cost of rebuilding the three unfixable stations. No money has been put into the 2021 budget for these projects, with promises to get to them eventually.

The 10-year capital plan suggests funds will be put aside to renovate Fire Station 102, 108 and 115. However, Fire Station 108 is the only building included in the City’s damning audit slated for repair from 2022 onwards.

Chief Nancy Macdonald-Duncan told The Pointer a plan to repair the other stations featured in the audit would be presented to council in January 2021. The move means funds can’t be set aside until at least 2022, when the City is already predicting a significant tax hike.

“The plan is to return to Council in January on this topic,” Macdonald-Duncan told The Pointer by email. “The Fire Building Condition Audit study was completed in 2019, and with the disruption of COVID-19 in 2020, it was difficult to integrate the study’s recommendations into the capital plan in time for the budget presentation. This is still a work in progress.”

The second part of Mississauga Fire and Emergency’s plan is to increase targeted enforcement and education. The service hopes improved public awareness and safety can reduce the number of callouts, freeing up trucks and reducing response times as a result.

This need for education and inspections is glaringly obvious. Data from the past four years show 62 percent of all fire calls are to locations that do not have a working fire alarm, despite it being a legal requirement to own one. 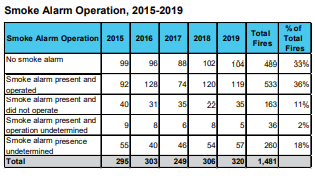 The Interim Chief says, while budget savings are a welcome bonus, the pandemic means the two programs would be difficult to deliver even if funds were flowing more freely.

“COVID-19 closures and precautions did not allow for a normal public education program nor for the full implementation of proactive inspections,” she said. “Public education traditionally involves attending and hosting public events, meetings etc. Proactive inspections were difficult to conduct when businesses were closed or in the interest of limiting exposure between inspectors and the public. So this program would have been deferred or greatly reduced due to COVID19 anyway; the hiring deferral did help the City with its deficit situation, but the delays made sense from a program standpoint as well.”

As strong as the pandemic justification may be, it doesn’t avoid the reality of the situation facing Mississauga fire. Response times remain well below their targets, fire stations are in desperate need of repair and inspections can’t yet take place.

The plan? Wait until next year.