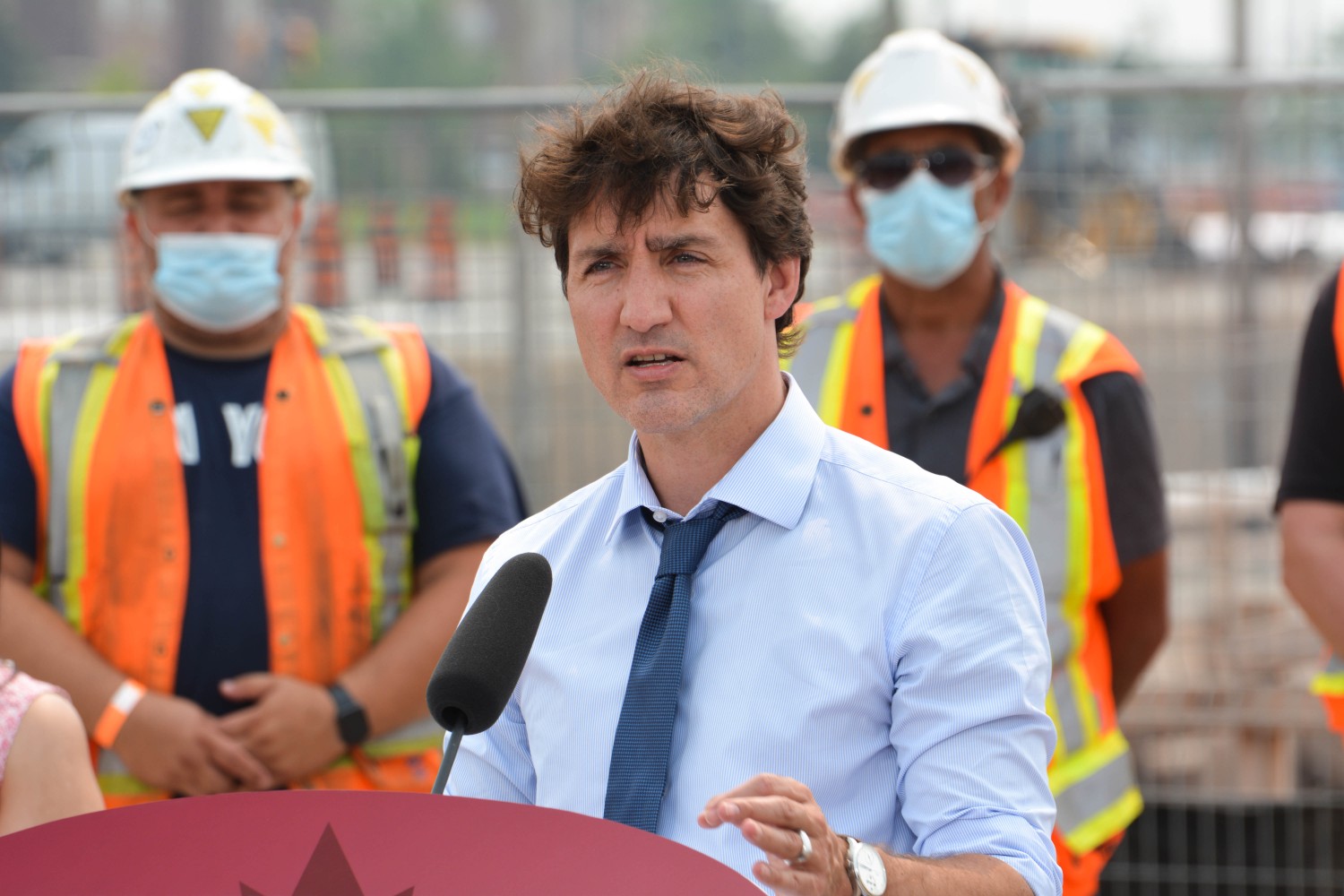 Amid speculation of a federal election, Trudeau visits Brampton for campaign-style housing commitment

Monday was another sweltering, soupy day in Brampton. For those in precarious housing, jammed into secondary basement apartments or waiting on Peel’s ridiculously long affordable housing waitlist, the heat can be another oppressive reminder of their bleak situation.

The steamy summer afternoon was made a little more bearable for those in the city who work in the affordable housing sector, trying to find solutions to a growing crisis. Federal bigwigs, including Prime Minister Justin Trudeau, Minister of Families, Children and Social Development, Ahmed Hussen, Minister of Transport Omar Alghabra, and all four of Brampton’s Liberal members of parliament, toured the construction site. A small crowd of passersby collected, surprised to see the leader of this country standing in their own backyard, in the oppressive humidity.

Prime Minister Justin Trudeau stands in front of the cranes constructing an apartment tower as part of the Mount Pleasant Village development. The building will now include 302 affordable units.

Rumours have swirled for weeks about a move by Trudeau to ask for parliament to be dissolved ahead of a fall election.

Brampton has been one of the country’s hottest campaign stops in recent races and the Liberals know Peel’s 12 seats can act as a beachhead in the vote-rich 905, where a party’s fortunes can be won or lost. Trudeau’s team won every riding in Brampton and Mississauga in 2019.

Trudeau touched on the key talking points Peel’s residents often focus on during a federal election, everything from immigration to housing.

“The Liberal Party has always been the party of immigration, we will continue to make sure that we have a strong, rigorous but generous immigration system to allow people to come build their lives here and build our country better, every step of the way,” the Prime Minister said in front of a large gathering of local and national media.

Last August, when Hussen made a $276 million affordable housing announcement when there was little talk of an election, Trudeau did not come to amplify the good news.

But he was front and centre Monday to drop the news of a 26-storey residential tower that will have 302 affordable units for Peel residents. The project will receive $120 million, funded by federal taxpayers through a national program. The amount is much less than what was announced last year, without Trudeau’s presence. 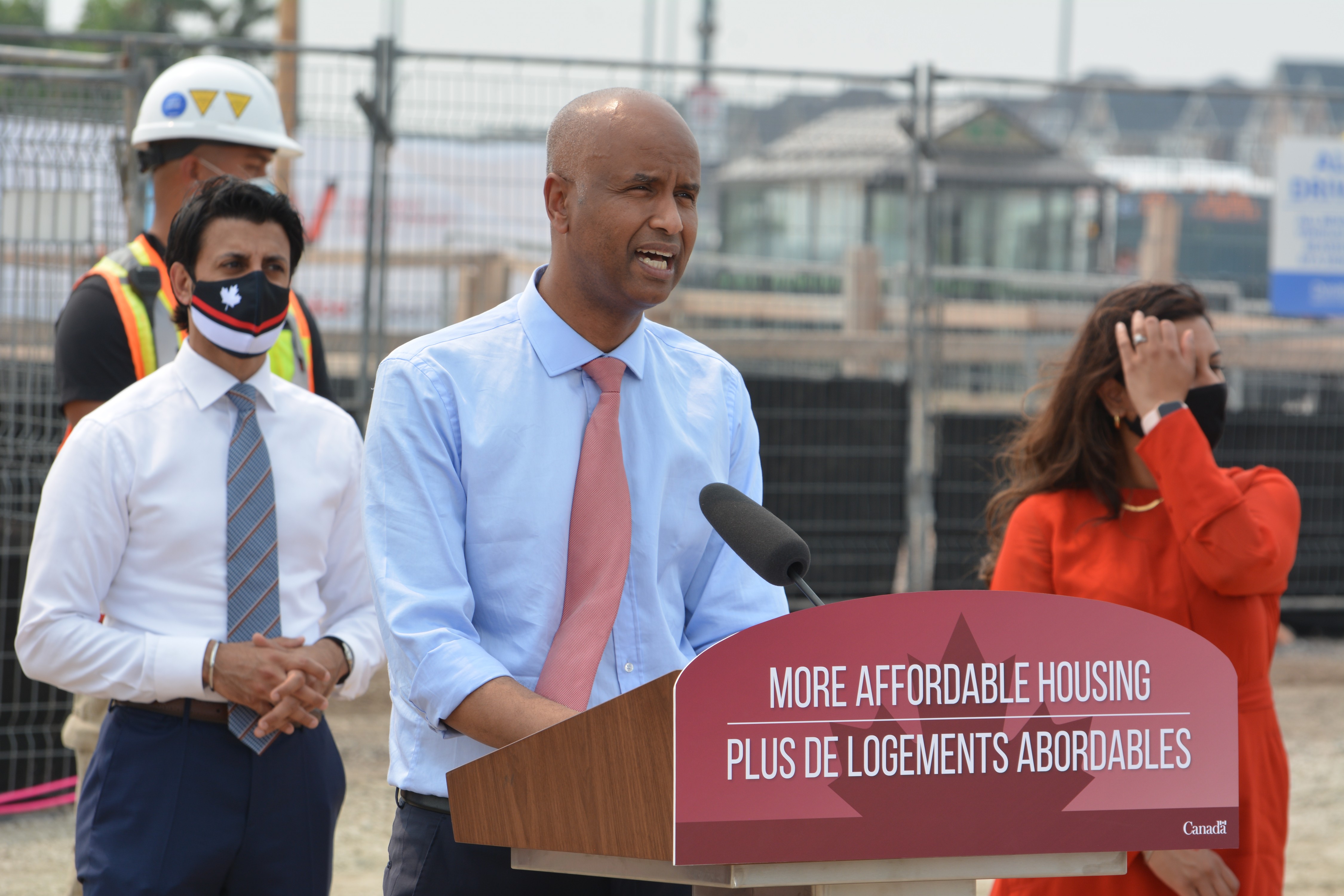 Trudeau was joined by a host of his Liberal colleagues for the campaign style announcement, including Minister of Families, Children and Social Development, Ahmed Hussen.

He said the money will come from the Rental Construction Financing Initiative first announced in 2017. The plan gives loans to developers to build units in areas where the demand for rental supply is high.

While the building is certainly cause for a small celebration, its added supply comes nowhere close to addressing the affordable housing crisis growing in Peel every year. A crisis that has persisted while the federal and provincial governments have thrown only the occasional funding commitment for housing projects Peel’s way.

The Region’s centralized housing waitlist has exploded during the pandemic. Near the end of 2019, there were 14,997 households on the waitlist. By the end of 2020, the number ballooned to 22,445, a 50 percent increase in one year alone.

According to a June 2020 report from the Region, rental housing prices are out of reach for 80 percent of Peel households.

One solution to the long-standing problem was the Home for All Plan; a 10-year housing strategy that launched in 2018 with the approval of regional council. Approximately 75,000 units would be constructed by 2028 and of the 7,500 units to be built annually, 2,000 had to be affordable, offering families much lower rentals than what the market dictates.

The plan has been a complete failure.

“The 10-year Peel Housing and Homelessness Plan (2018-2028) identified that more than one in 10 new homes that are built must be affordable to low-income households to keep up with forecasted growth – since 2018, less than one in 2,600 new ownership homes built have met that threshold,” the Region’s dire update stated.

The report illustrated the Region is the only level of government trying to effectively address the crisis, claiming it can’t do it without proper funding from the two higher levels.

Affordable housing used to be Ottawa’s responsibility until the Liberal government of Jean Chrétien downloaded it onto the provinces in 1996. In Ontario, the Mike Harris PC government immediately kicked affordable housing down to the municipalities and it has been largely ignored since.

The $276-million announcement last summer was part of the Region’s larger Housing Master Plan (HMP), an overarching strategy that needs $1 billion to implement all of its goals. 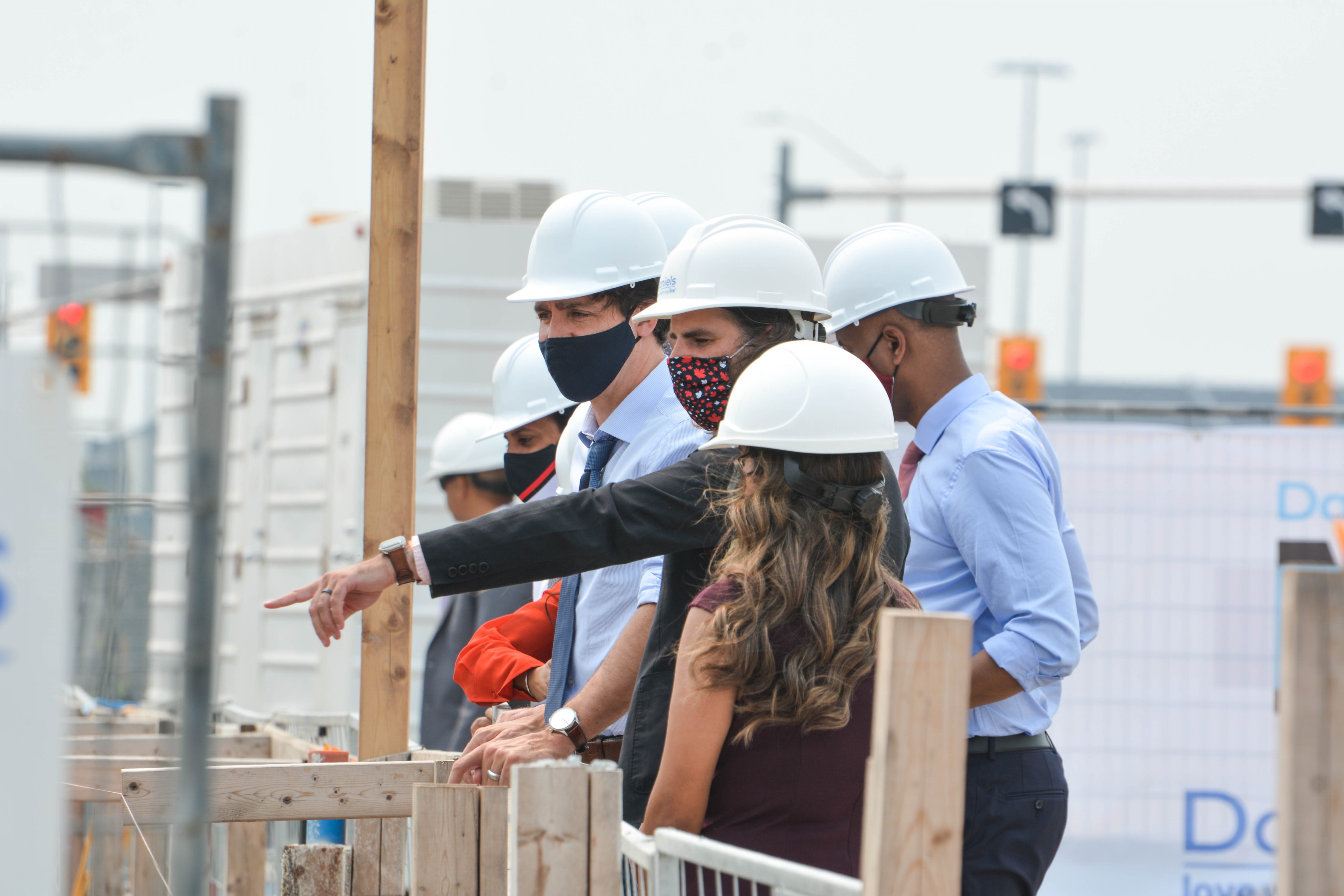 Trudeau receiving a tour of the Mount Pleasant Village construction site. The Prime Minister did not commit to creating a Peel specific housing strategy when asked repeatedly by The Pointer.

It’s clear there’s a disconnect between the federal government's understanding of what’s needed in Peel and the reality of the region’s ongoing crisis. Trudeau said Monday’s commitment will increase the rental supply in one of Canada’s fastest growing regions, but in reality, it barely makes a dent given Peel’s staggering waitlist.

Trudeau was asked by The Pointer if the federal government would take steps to create a specific housing strategy targeting Peel, which welcomes an outsized number of newcomers each year. Trudeau took the opportunity to praise the affordable housing work his party has done since he was first elected as prime minister.

“When we arrived in 2015, the federal government had removed itself entirely from the business of investing in housing and therefore we had some catching up to do. That's why we invested historic amounts in the National Housing Strategy to kick things off,” he said, before listing off a number of the housing initiatives his government has committed to.

A follow-up question about any possible pledge to support Peel’s under-funded housing plan, specifically, was handled by Hussen, but the answer did not change much, as neither politician committed to a direct partnership with Peel to provide sustained funding to meet the region’s ambitious, but badly needed housing targets under its master plan.

Both acknowledged more needs to be done.

“I join the Prime Minister in saying that, of course, there's always more work to be done. But we have, of course, substantially invested in this region because we know the need is great and… more work needs to be done, absolutely,” Hussen said.

The Liberal government’s national housing strategy, A Place to Call Home, launched in 2017 with the goal of investing $40 billion over 10 years to create 100,000 new affordable housing units, find homes for 530,000 households in need and reduce the number of chronically homeless individuals in shelters across the country by 50 percent. From the outset, advocates were concerned that the plan did not do enough to address the long-term needs of families looking for housing.

“The National Housing Strategy includes some bold moves and puts affordable housing in Canada on a much better foundation that it has had for two decades,” Greg Suttor, a lead researcher with the Wellesley Institute, stated shortly after the Liberal strategy was launched.  “The scale of programs could take a bite out of affordability problems, but won’t widen the options for people looking for an affordable place to live.”

In Peel, the crushing waitlist for affordable housing is proof.