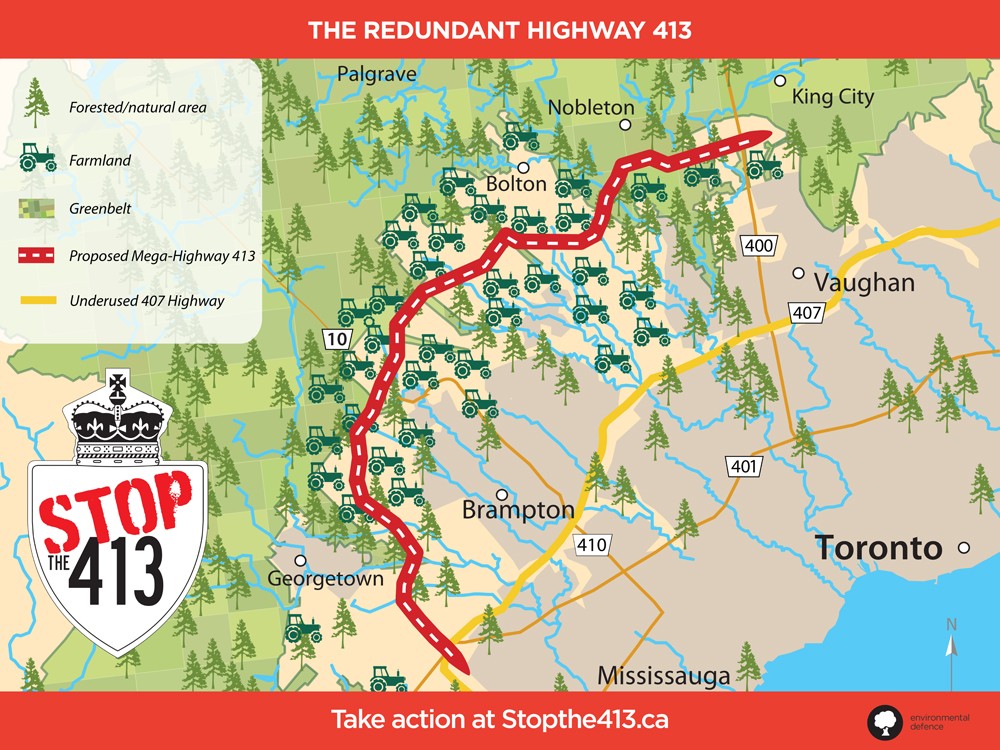 To the north of Brampton, in the fields of Caledon, a white blanket of snow covers the pristine landscape.

Ontario’s Greenbelt, the lungs of the entire region, runs right through the rural municipality.

The rolling hills and untouched nature are rare in the GTA, where endless development and choking traffic push out all signs of the natural world. 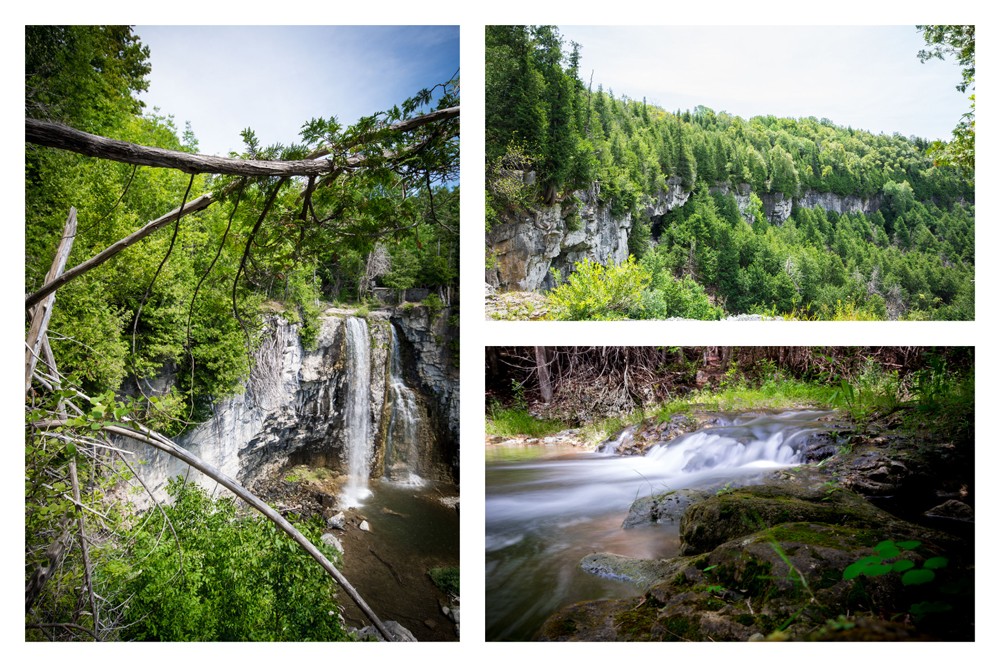 The vast landscape of Ontario's Greenbelt, the world's largest quilt of protected green space, faces numerous threats as development pushes in on all sides.

This pandemic has reminded humans on the hamster wheel that stepping off and finding refuge in wide open spaces, surrounded by trees and big skies, breathing in crisp, clean air, is essential to our well-being.

Over the next few years, a Progressive Conservative plan will turn over more untouched land for the human hamster wheel. Large stretches of south Caledon, right along the protected Greenbelt, will be replaced with asphalt, gridlocked vehicles emitting tons of carbon and sprawling single-family subdivisions.

The Province’s new 400-series highway, known as the GTA West Corridor or Highway 413, means a massive new thoroughfare will be laid from Halton Region up the western side of Brampton, east through Caledon and then onto Vaughan. 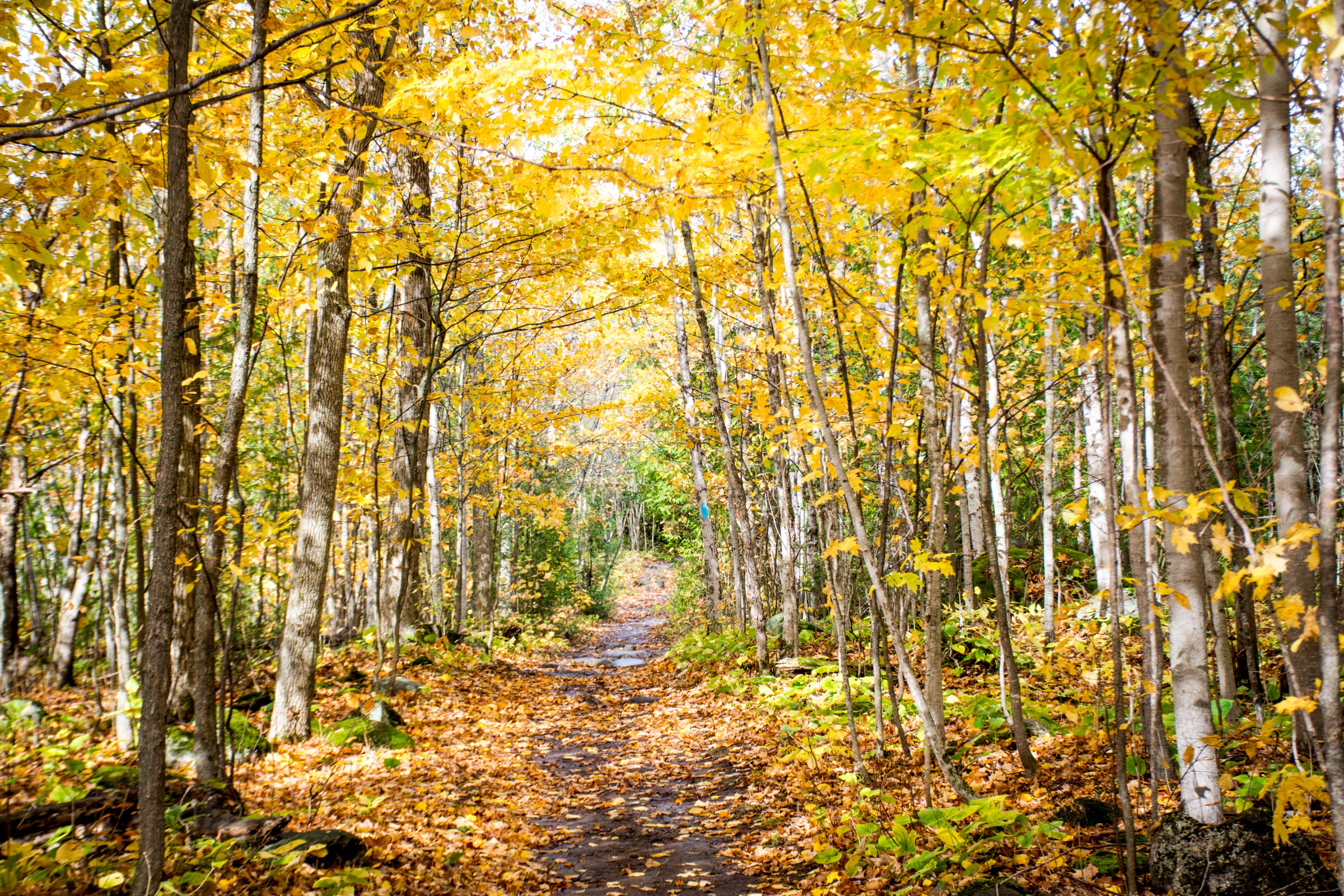 The COVID-19 pandemic has reminded many GTA residents of the true value of stepping outside.

The NDP now says it will scrap the highway if it forms government or works in a coalition after the next provincial election in 2022.

In an interview with The Pointer, NDP Transportation and Highways Critic Jennifer French, pledged for the first time that her party would put an end to the sprawl-inducing plan.

“The NDP cannot support what is a costly and unnecessary highway which will destroy protected areas,” she said.

The GTA West Corridor has been a significant priority for Premier Doug Ford and his PC government since they won a landslide election victory in 2018. It was current Brampton Mayor Patrick Brown who put the highway on the PC election platform when he was party leader, before he was driven out by former colleagues following allegations of sexual misconduct against Brown (which he denies). 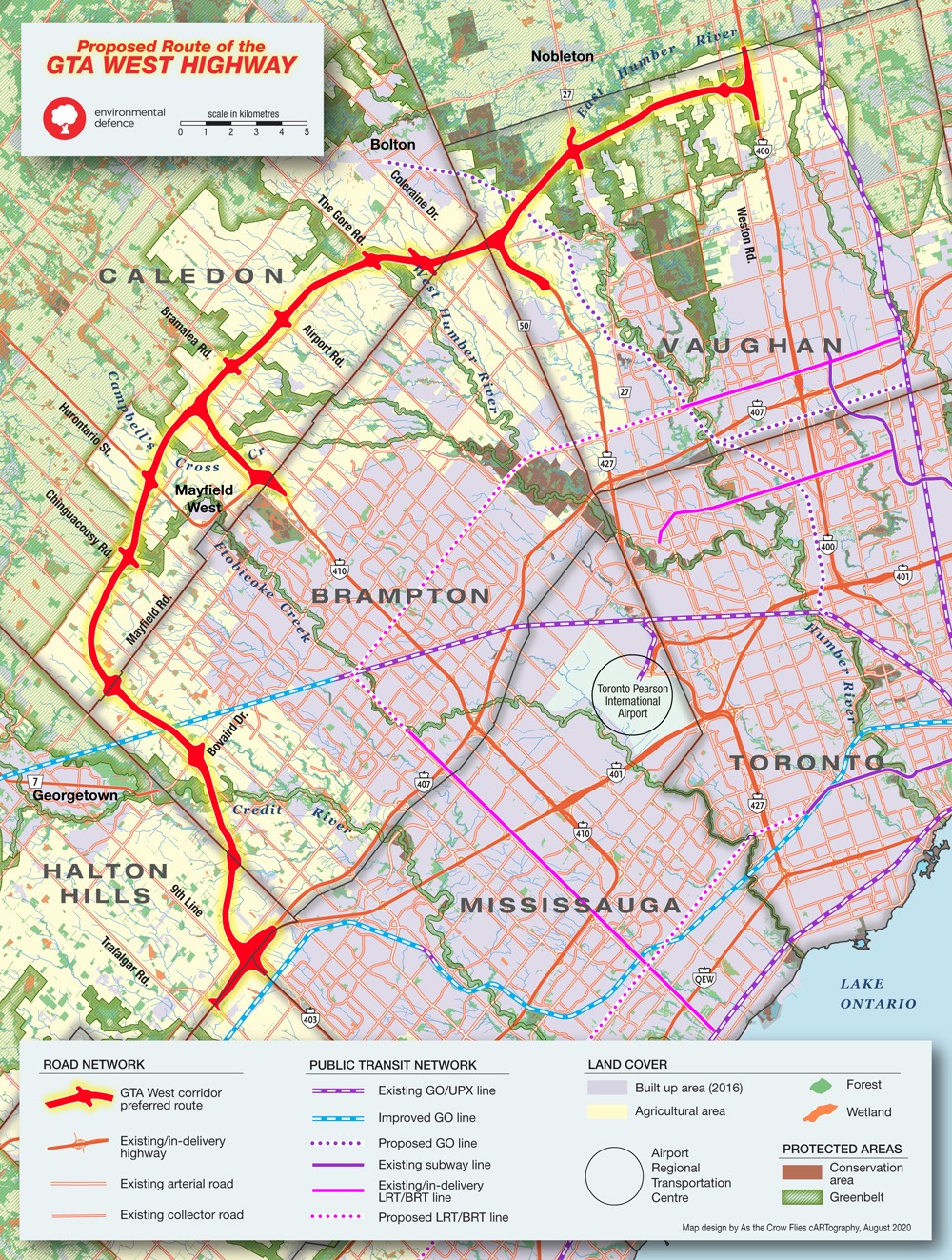 The proposed route of the GTA West Highway, which runs mostly adjacent and partially through the Greenbelt.

The moves were necessary because the previous Liberal government chose to scrap the project, after an expert panel found it would not significantly improve the GTA’s chronic congestion issues. The panel weighed up its environmental impacts, costs and noted the meager 30-second saving it offered on commutes would be better achieved through policy changes such as congestion pricing or investments into public transit.

Specifically, the panel found it “would deliver few benefits, and could not be justified.”

But Ford was caught on video during the 2018 election campaign promising developers that if he won, the Greenbelt would be opened up for construction. The 413 Highway is the key to doing this.

If the highway is built, it will replace this: 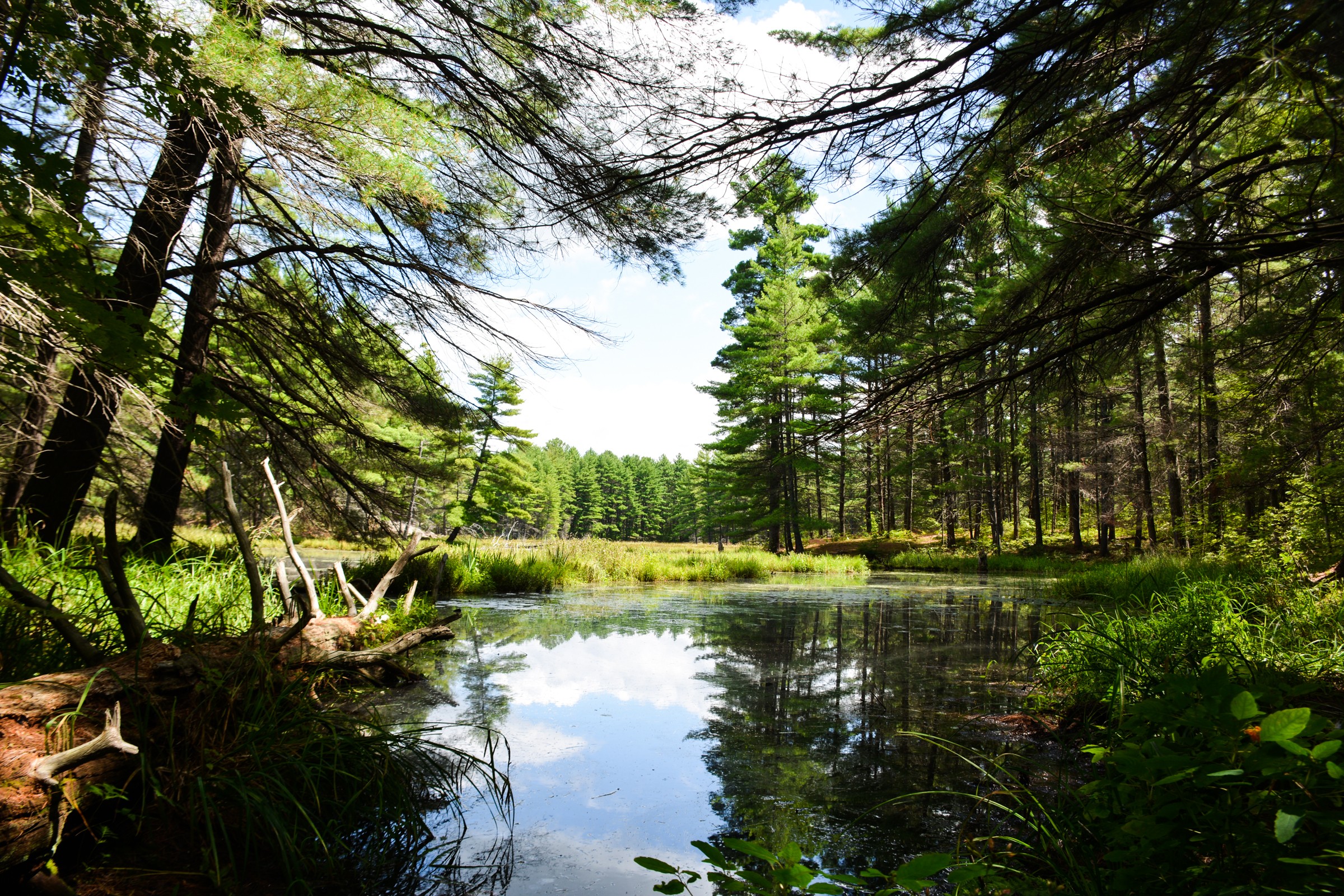 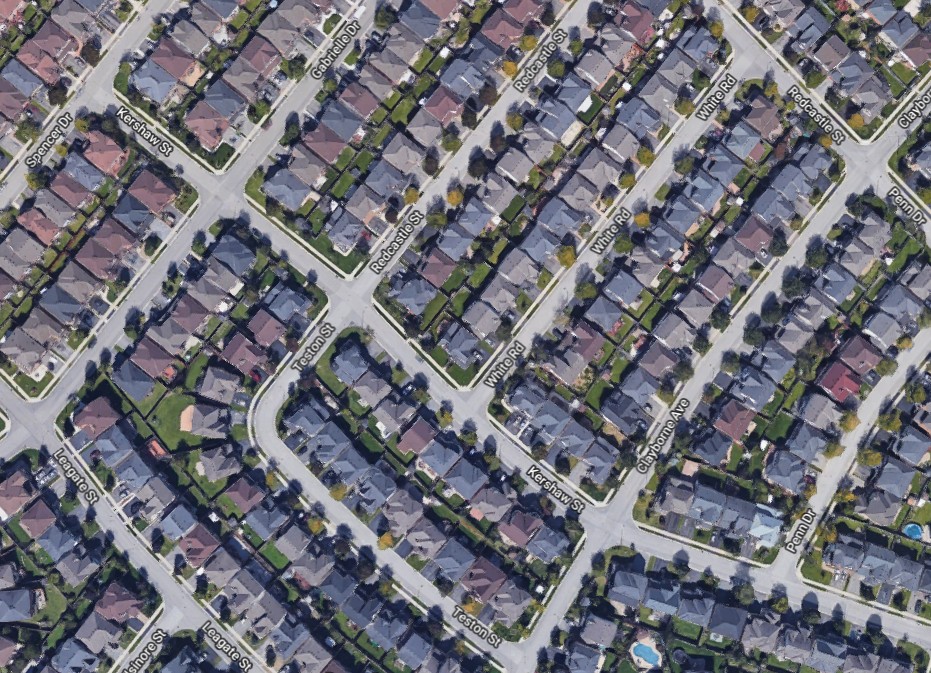 Undeterred by expert opinion, the Ford government has attempted to ram the project through. Frustrated by the highway’s proposed timeline, legislative changes over the summer will reduce the project’s EA process and speed up its delivery. Plans to side-step crucial environmental-study processes promised only to “eliminate duplication while maintaining environmental protection” without offering many concrete examples of how the PCs plan to expedite the EA work.

Even with its shortened EA, it is unlikely the GTA West Corridor would be ready for construction until after the next election in 2022. The route’s true point of no return may not be reached until after Ontarians return to the polls.

“This project is one more clear example of the government looking out for developer interests and we — and many others alongside us — would hope for better leadership from the government when there are so many other avenues or opportunities to do better without doing the environmental damage, to do something that will have better economic benefits, that isn’t a direct attack on green space,” French said. 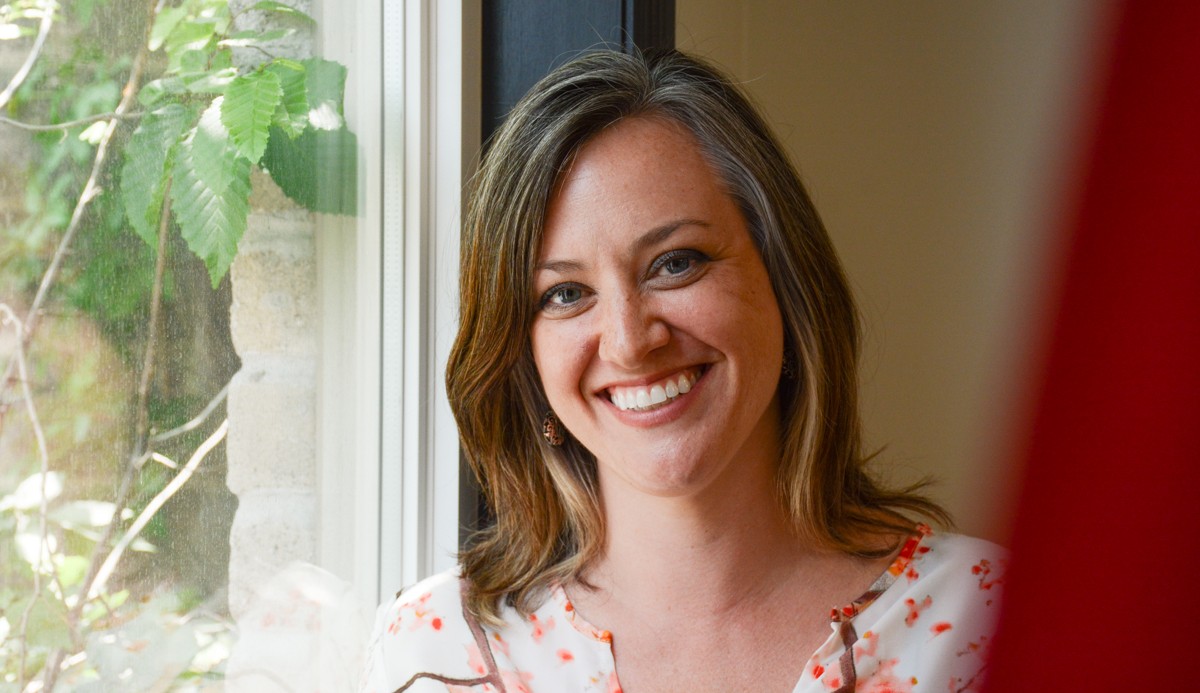 Cancelling the estimated $6 billion project would unlock a world of alternative investment possibilities. The City of Mississauga recently received $51.5 million from the Province to fund various transit investments, while Brampton received $37.8 million for its bus network in the summer. These costs pale in comparison to the price tag for the GTA West Highway, a figure that could work out to $2 billion each for Halton, York and Peel if it was reinvested in smart, clean transportation for the regions the highway will pass through.

A summer report by Environmental Defence, a group that has spearheaded opposition to the highway, suggested an eye-opening number of projects that could be funded for a similar cost.

It calculated that expansion of the Kitchener and Milton GO lines, a Bolton GO station, a Brampton LRT extension and bus rapid transit corridors along Dundas Street in Mississauga, Queen Street in Brampton and Major Mackenzie in York could all be achieved for $6.9 billion instead of the highway’s $6 billion. Some calculations for the projects, including $300 million for the Brampton LRT, may be on the conservative side, but the list shows just how wide-ranging the impact of reinvesting the funds could be.

Potential projects that could be funded if the GTA West Highway is cancelled.

“I think whatever it looks like needs to answer to the actual needs of the communities, not the needs of developers,” French said. “Whether that is taking the time and being thoughtful in the alternative — investing in public transit, ensuring that downtown’s have what they need to grow… if you’re not going to take the time and work with planners and be thoughtful, then you’re going to see what you see with this government, which is just reaching for the developers’ wish list.”

Just how isolated the PCs are in their support for the highway is unclear, but aside from the powerful development lobby and some pro-development municipalities (Caledon being one of them), opposition to the highway is wide reaching. Environmental groups from across Ontario, including the David Suzuki Foundation, the Federation of Urban Neighbourhoods, and Environmental Defence are all advocating to the province to change course. Municipalities along the proposed route have also spoken out against the project. Halton Region wrote to Ford in the fall telling him the proposed highway was completely incompatible with its plans for the future.

Mike Schreiner, the Green Party’s only MPP, has been vocal and clear in his opposition to the project, even visiting Caledon in the summer to showcase the protected areas it risks destroying. The Liberal Party, originally responsible for the route's cancellation, has chosen to sit on the fence.

“Our platform process is underway and we look forward to sharing our plan for the province over the coming months after a real, meaningful consultation with party members and supporters,” Will Wuehr told The Pointer, on behalf of the Ontario Liberals.

“Right now we're focusing our energy on a grassroots platform consultation to make sure our members and supporters are able to have their ideas heard and represented in the platform,” he added in a follow up when pushed for a commitment and asked how current Liberal MPPs would vote on anything related to the GTA West Corridor.

With the pandemic slowing all kinds of infrastructure projects around Ontario, there is no guarantee shovels will enter the ground on the GTA West Corridor before the next provincial election. Depending how successful the current government is in its attempts to rush the process, the NDP or Liberals may be presented with an opportunity to slam the breaks at the eleventh hour if the PCs can’t hold onto power.

“I certainly don’t advocate for the building of more roadways willy-nilly,” French added. “Everything needs to be carefully planned with municipal partners. Not just, ‘Here’s a map, let’s draw a line straight through it’.”