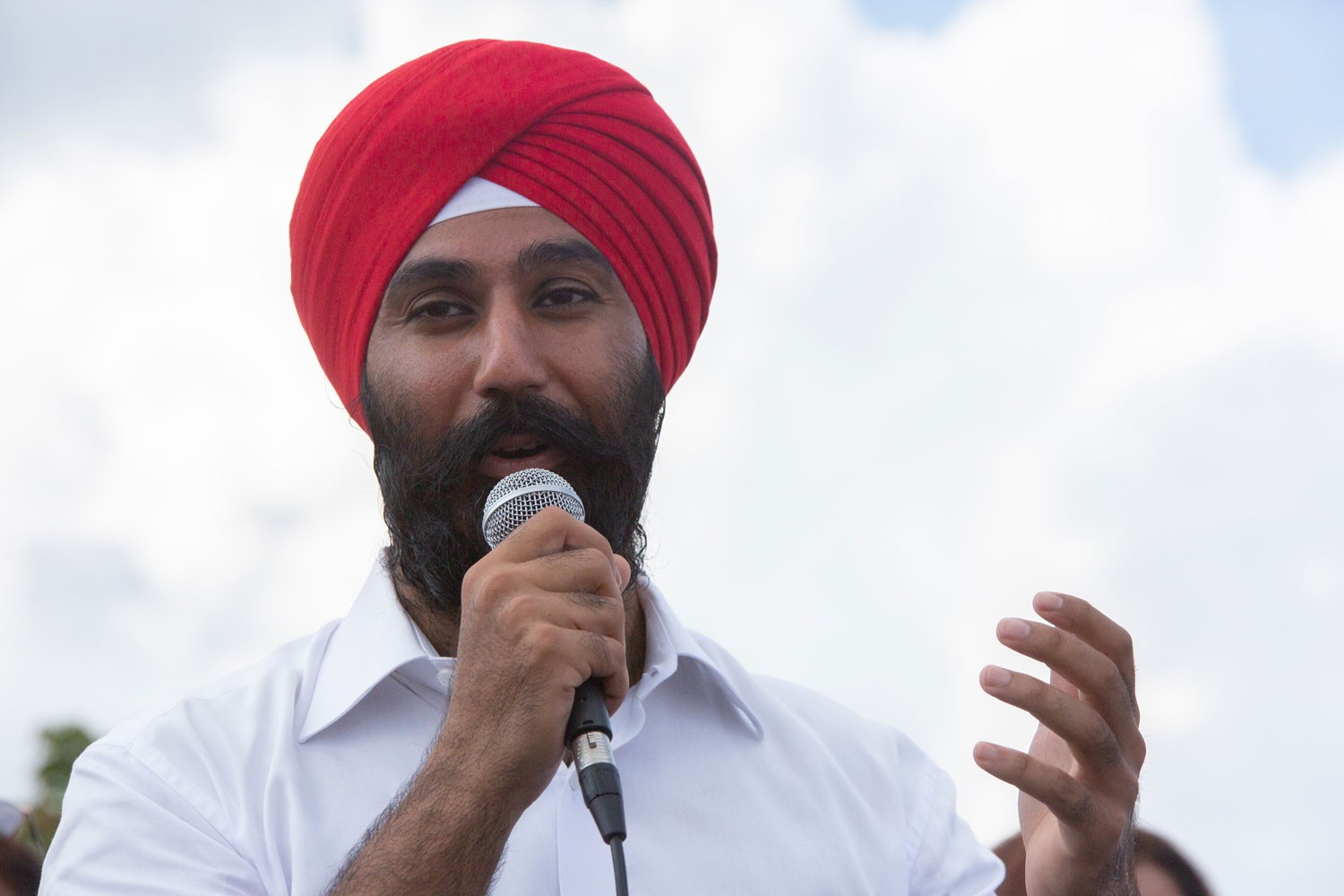 On Friday, after a three-year-long “extensive criminal investigation”, the RCMP laid five charges against former Brampton East MP Raj Grewal for fraud and breach of trust during his time as a Liberal member of Parliament.

According to a release from the RCMP’s National Division of Sensitive and International Investigations, the charges stem from Grewal’s failure to report his receipt of “millions” in personal loans to the Parliamentary Ethics Commissioner, “in circumstances that constitute a criminal breach of trust.”

Grewal faces four charges of breach of trust and one charge of fraud over $5,000. He is expected to appear in an Ottawa courtroom on October 6. 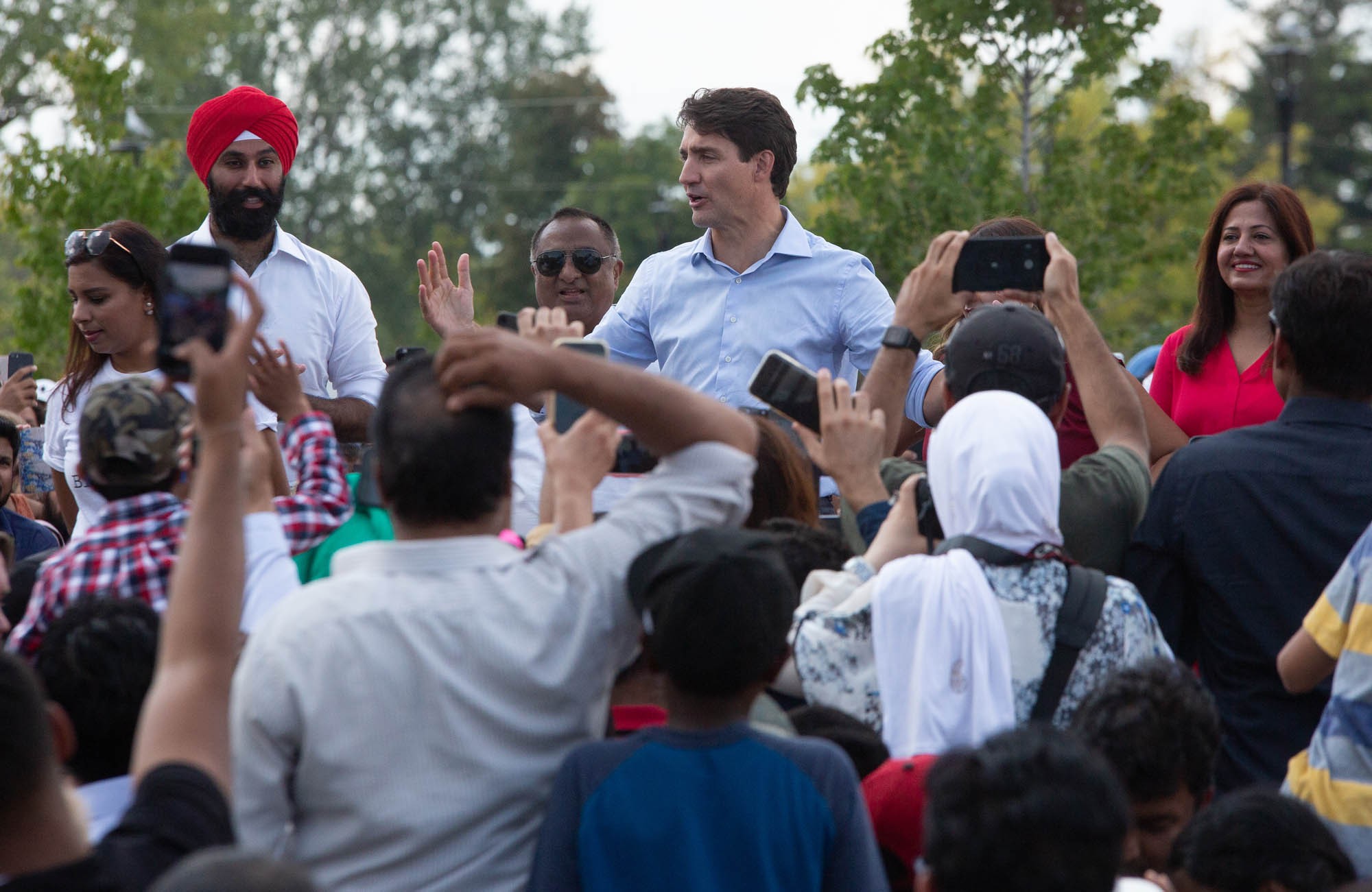 A spokesperson at Grewal’s RSG Law office in Brampton said he would not be commenting at this time. The disgraced former MP, who made national headlines at the end of 2018 for his questionable financial activity and eventual admission of a gambling problem, is still listed as a member of the Law Society of Ontario.

In Friday’s release, the RCMP note the charges stem from an investigation that began in September of 2017 following disclosures from the Financial Transactions and Reports Analysis Centre of Canada (FINTRAC) “regarding suspicious transactions involving Mr. Grewal during his time in office.”

No further information is provided about the amounts of money Grewal allegedly misused. His problems were not revealed until a year later, when they were widely reported in the media, well after the RCMP investigation began.

In 2018, the Globe and Mail reported that the RCMP had been investigating the actions of Grewal months before his eventual resignation due to a “gambling addiction” in November 2018 — a decision he would later walk back — and had analyzed millions of dollars in transactions made by the former MP, including at a casino near Parliament Hill.

Quoting anonymous sources, the Globe reported that the RCMP had been tipped off to Grewal’s financial activities by the FINTRAC, which requires casinos to report transactions of more than $10,000 made in a day. Another of the Globe’s federal sources said Grewal crossed that threshold many times at an Ottawa-area casino. 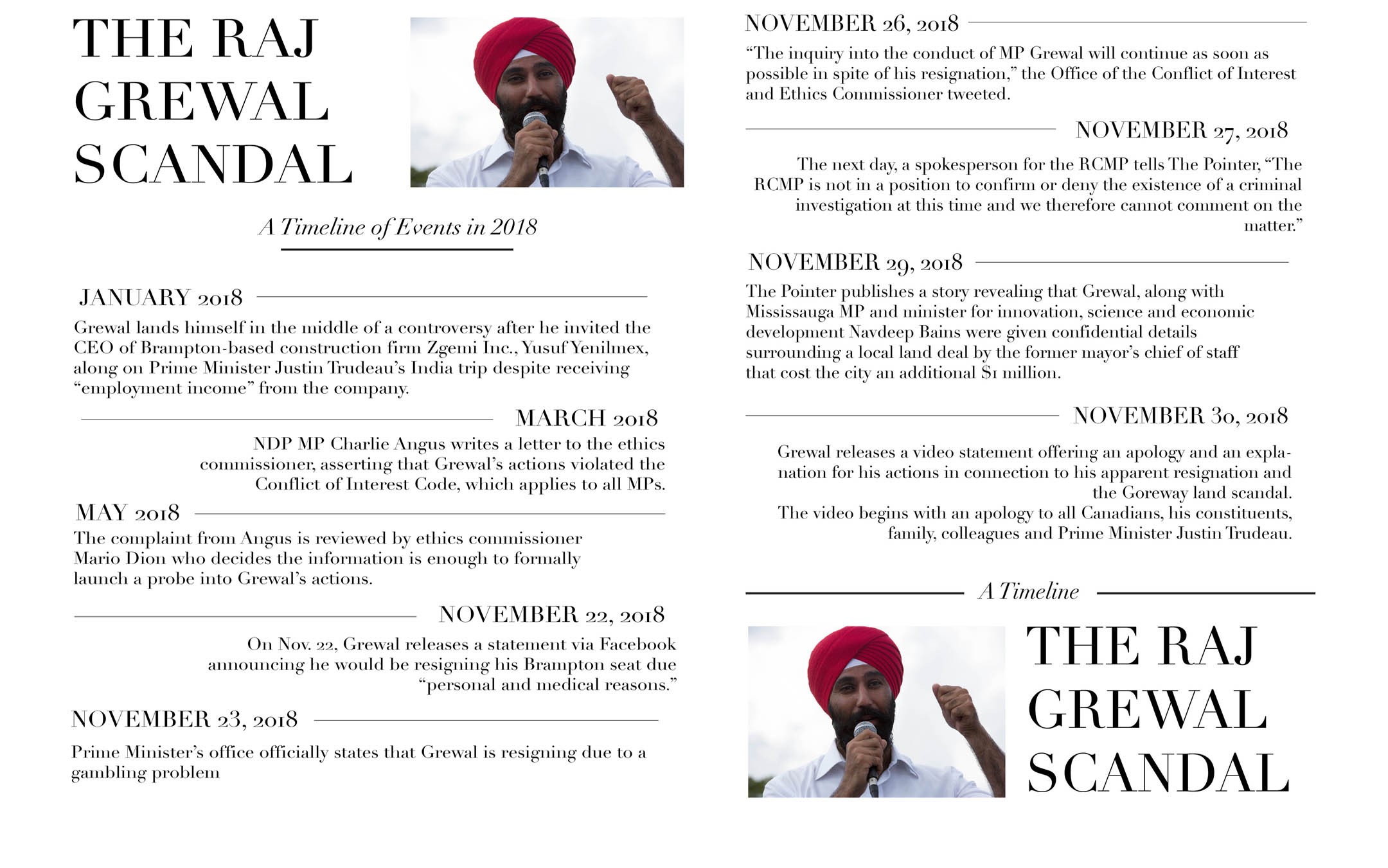 The Globe also reported that in January of 2018 Grewal and his girlfriend, Shikha Kasal (who he later married), bought a pair of condo suites in downtown Toronto, one valued at $1,295,575, secured with an HSBC Canada mortgage of $1,499,999. As well, Grewal had lines of credit with Royal Bank, TD Bank and the Bank of Nova Scotia.

Grewal was first elected as part of a Liberal red wave that swept across Brampton when he contested the 2015 federal election, beating out Conservative incumbent Bal Gosal. During his final months in office, he was no stranger to scandal.

In March of 2018, a complaint was sent to the federal ethics commissioner, Mario Dion, asserting that Grewal’s conduct on Prime Minister Justin Trudeau’s much-maligned trip to India in January of that year, violated aspects of the Conflict of Interest Code, which applies to all MPs.

Grewal, who attended the trip alongside the PM and other Brampton MPs, invited Yusuf Yenilmez, CEO of a GTA construction company, Zgemi Inc., with him on the visit. Yenilmez attended functions during the official trip, which featured meetings and events with influential politicians, business people and bureaucrats from Canada and India.

It was revealed, in a disclosure to the commissioner, that Grewal was receiving employment income from Zgemi Inc.. After assessing the complaint, the commissioner determined it warranted an official investigation and a probe was launched. The outcome of that investigation has yet to be announced. 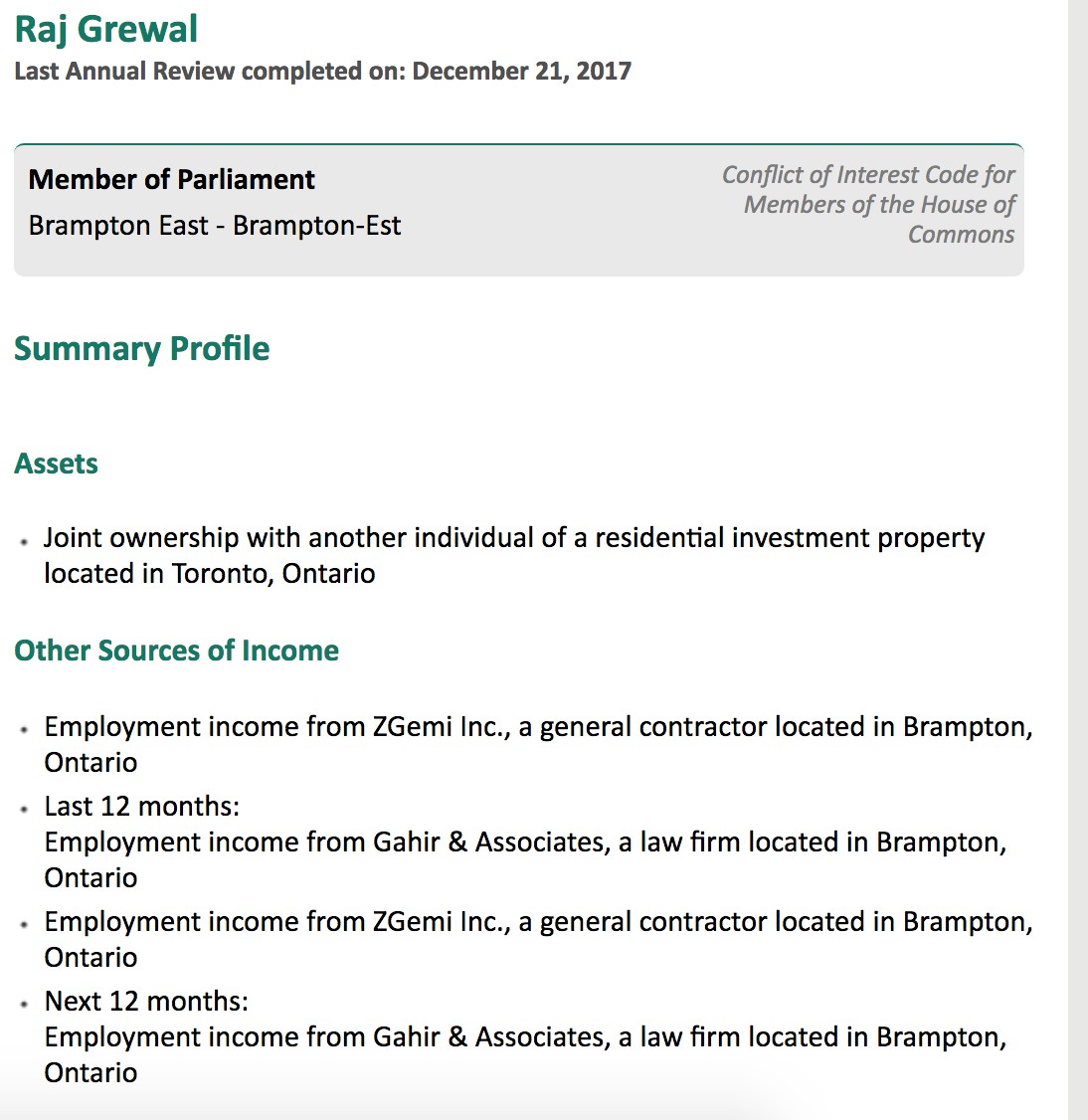 In November 2018, while still an MP, Grewal made the surprise announcement on his Facebook page that he would be resigning, explaining that he was leaving due to “personal and medical reasons.”

About a week after his resignation, the troubles continued for Grewal when Brampton City Council decided to send the RCMP the findings of a forensic investigation into an inflated real estate deal that cost the city an extra million dollars. It remains unclear whether this information is part of any of the charges announced on Friday.

The City needed a provincially owned 20-acre parcel to solve a traffic congestion issue on Goreway Drive, south of Steeles Avenue. Punia revealed confidential details, including the agreed price of about $3.3 million, to Grewal and Bains, Minister of Innovation, Science and Economic Development. The deal never went through, but the land was snatched up by a private consortium called Goreway Heaven Inc. shortly afterward for close to the same amount and then resold to the city only months later, for $4.4 million. Members of the consortium that made a handsome profit had ties to the Liberal party.

At that time, after the internal investigation findings were passed along by the City, the RCMP did not confirm any investigation into Grewal regarding the matter.

“The RCMP is not in a position to confirm or deny the existence of a criminal investigation at this time and we therefore cannot comment on the matter,” the RCMP told The Pointer after Council sent its forensic findings to the federal police. It is now known the RCMP were indeed investigating financial activities of the former Brampton MP.

At the start of December 2018, Grewal responded to the allegations, explaining in a video statement that he had repaid gambling debts in the millions of dollars and that he was re-thinking an “ill-advised” earlier decision to resign from his job.

“In a highly emotional state, completely exhausted and facing extreme time constraints I made an ill-advised statement on Facebook that I would be resigning my seat,” Grewal stated in the 11-minute video.

In it, he explained he gambled recreationally since university, but the habit developed into a mental health issue when he started to play high stakes blackjack at an Ottawa-area casino next to the hotel he stayed at as a parliamentarian.

He said he started to borrow money solely from friends and family to continue gambling, and that all the money had been paid off, largely with the help of his family.

He said he had decided he would be leaving the Liberal caucus and would take a leave of absence to focus on his mental health and a treatment plan. After the Liberals removed him from the party, he would later stay on for the remainder of his term as an independent MP. He did not seek reelection in 2019.

Grewal also addressed his involvement in the Brampton land deal controversy. He said he had requested updates on the Goreway Bridge project from the mayor’s office so he could keep his constituents informed about the issue. He said he received an “unsolicited confidential report” from Jeffrey’s chief of staff, Hasneet Singh Punia, on Nov. 21, 2017. “I did nothing further with this report,” he stated. Any suggestion that he leaked the confidential information to anyone is “categorically false,” Grewal stated at the time.