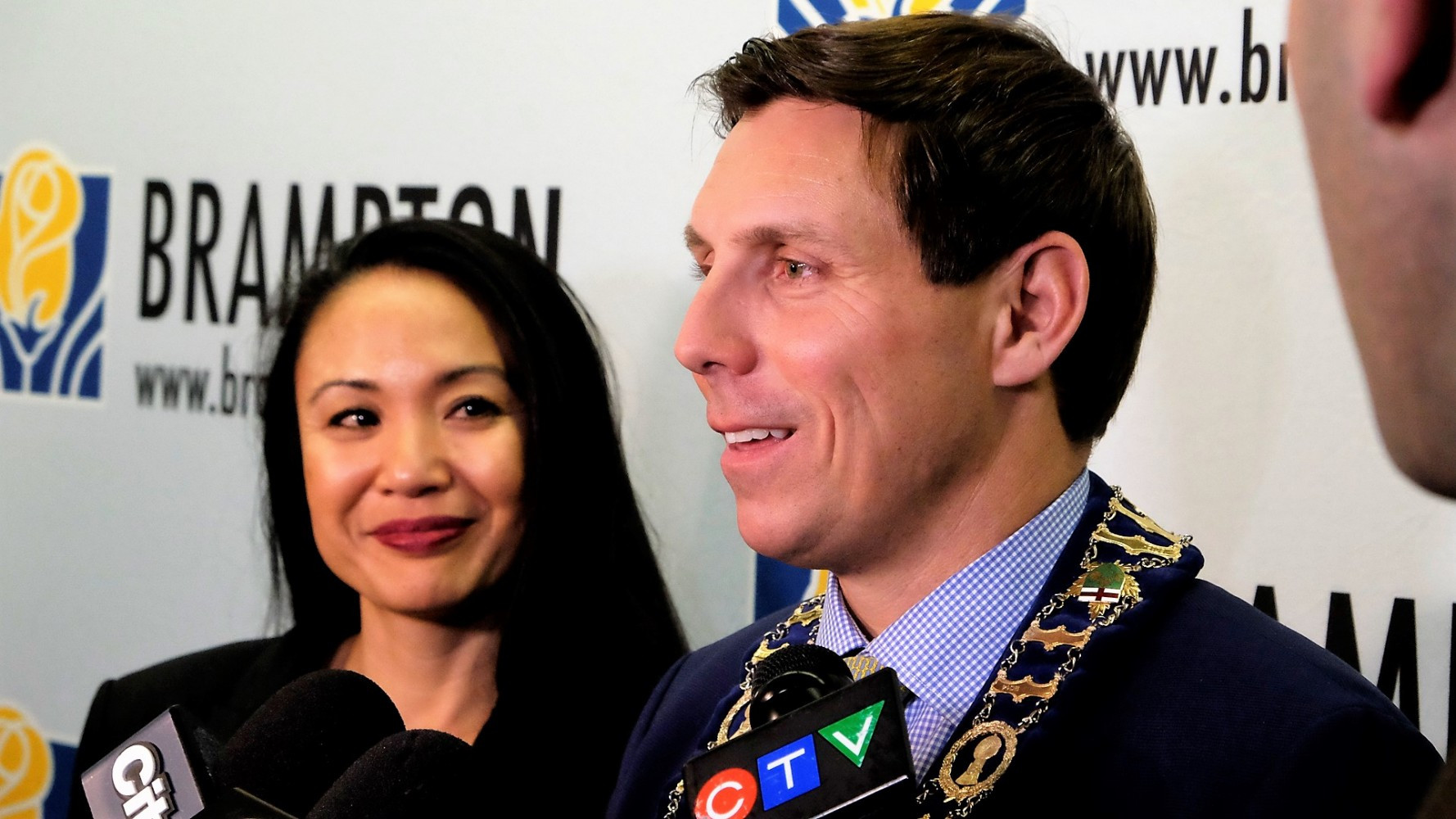 The same Brampton Council members who passed a motion that bans outdoor election signs are responsible for 1,083 election sign violations during the recent municipal campaign – about a third had Mayor Patrick Brown’s name on them.

When the motion was brought forward on November 23 by Rowena Santos, who had pushed to ban election signs shortly after she used them to win her seat on council in 2018, she and other members claimed that widespread violations of election sign rules was one of the main reasons elected members should ban the outdoor use of signs that are a staple of the democratic process across Canada.

When staff revealed almost 4,600 election sign violations by candidates who ran for council, eight of the eleven members attempted to brush the issue aside, voting to excuse the fines, while the names of those who broke the rules were kept from the public.

After public outcry, the vote was turned around, and all fines were reintroduced. However, names were not provided. The Pointer had to file a freedom of information request to obtain the names of violators, the number of violations by each candidate and the fine amounts.

Brampton’s chaotic council maneuvering, led by Santos, has taken more twists on the sign front recently. After the motion for a ban on outdoor election signs, which she pushed during the November 23 committee meeting, sparked a fierce public backlash including a legal threat by the Canadian Constitution Foundation, Santos, Brown and the City appear to have walked their ill-conceived scheme back.

They are now claiming the move was just preliminary, even though the vote was clearly intended to enact the ban, through a motion that passed unanimously at the committee level before it was to be ratified, as a formality, during the next full council meeting.

The Pointer, however, could find no ratification of the vote, which should have happened at the next full Council meeting (it appears staff and members of council have somehow kept the motion off any subsequent full council meeting agenda, despite the usual practice of ratifying a committee vote at the next council meeting).

The move by Santos, Brown and others appears to have blown up in their face.

“In selfishly protecting their incumbent positions with this by-law by banning outdoor election signs outdoors on private property, Brampton politicians have trampled on the rights of residents to express their political opinions in the most crucial time – during an election,” she said.

In Brampton, all signs, including election signs are regulated under the authority of the City’s Sign By-law 399-2002. 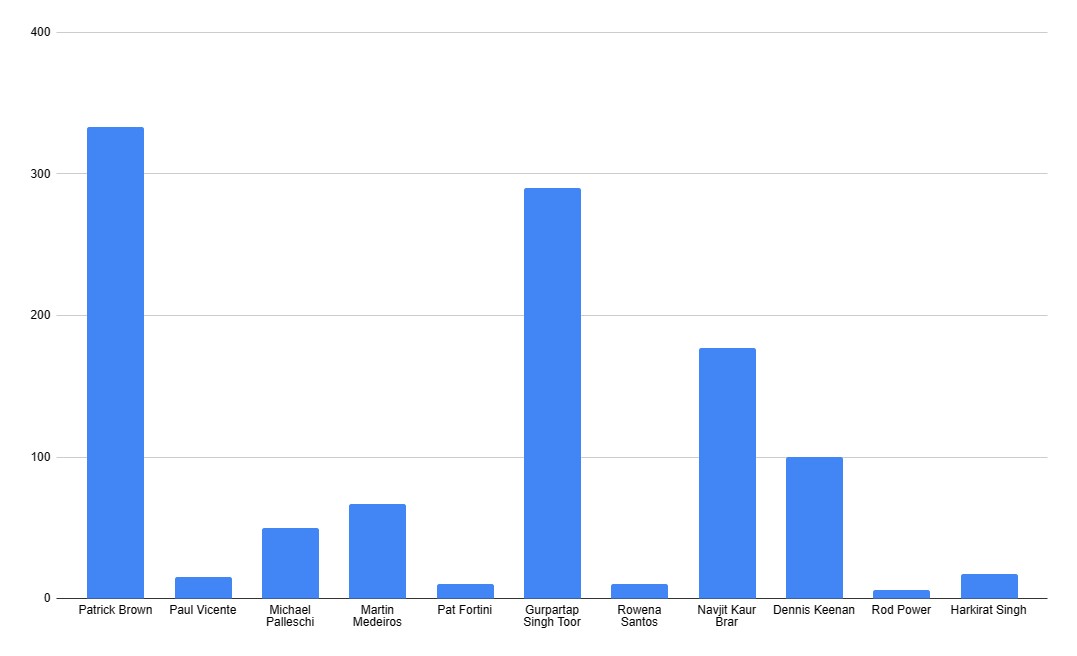 The member of council with most election sign violations for their respective two wards was Gurpartap Singh Toor at 290, only beaten by Mayor Patrick Brown whose campaign racked up 333 violations across all of Brampton.

Illegal election signs include those that are placed on any public property or on private property without the consent of the owner; those that exceed the maximum size or number of signs permitted by the Sign By-law; and those that continue to be displayed 72 hours after an election.

According to staff, the volume of complaints requiring investigation into illegal election signs continued to grow this year. In the 2018 election there were 1,440 complaints, resulting in 1,167 violations. In the 2022 municipal election race there were 4,574 violations by mayoral and councillor candidates and 4,936 when school trustee candidates are included. 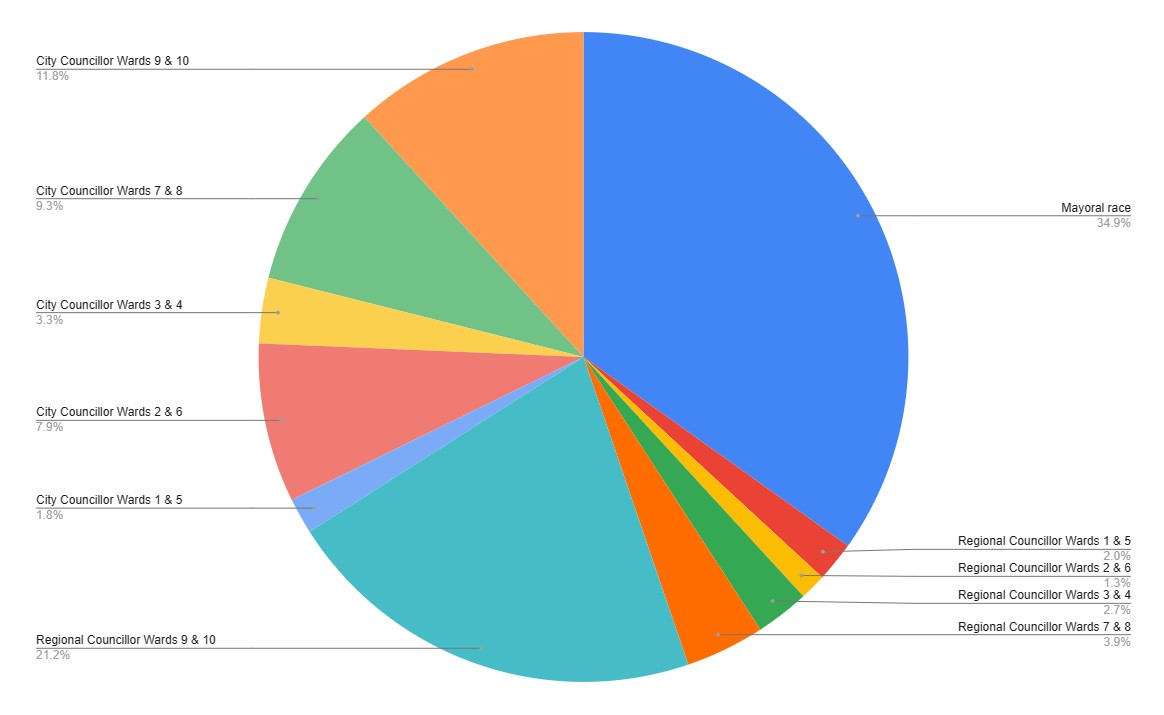 After staff highlighted the increasing number of violations on November 23 Council voted to ban outdoor election signs displayed on private property, limiting them to posters inside of homes and displays through windows.

Brought forward by Santos, the motion prohibits any outdoor sign during all elections for all three levels of government. Her name appeared on 18 illegal signs, the second most violations in the City Councillor Wards 1 & 5 race, out of seven candidates. She did not mention this when claiming violations were a key reason for bringing her motion forward.

After the public backlash and legal threat by the Canadian Constitution Foundation, Santos, Brown and the City suddenly changed course.

On December 14, Council voted to hold public consultations on the ban, following an in-camera discussion about potential litigation. Staff will be reporting back to Council with recommendations.

Members of the public demanded to know why Santos, Brown and others did not consult the public prior to bringing a motion forward, without making any effort to gauge how residents feel, including some who just voted to be properly represented by them.

In a release, Van Geyn said the CCF is pleased with Council’s backtracking.

“Our sincere hope is that following this consultation period Council realizes that their plan to restrict election speech is legally flawed and changes course. This looks like the first step in a walk back of this by-law, and if that ultimately is the case, it is the right move for Brampton voters.”

The motion, which passed November 23 in committee, remains unratified.

Brown, who had 333 violations, has since tried to justify the move to ban outdoor election signs without seeking the input of residents, claiming, after the vote was already taken sparking the backlash, that proper consultation will now be done.

During discussions in support of the ban on November 23, Councillor Harkirat Singh, who had 17 violations, addressed the issue.

“When one person starts doing it everybody has no choice but to follow, otherwise you lose the awareness that you’re running. People think just because there’s so many signs that a candidate is very strong, then another candidate feels the only way to compete is to also do illegal signs. Everybody wants to one up the other and it gets out of control really fast so I think a clear policy where we just have a clear ban on them will be helpful.”

The three candidates responsible for the most violations ran in Wards 9 & 10, which was responsible for 33 percent of the 4,574 council-related election sign infractions, inclusive of the mayoral race. Singh ran as an incumbent.

Manpreet Othi, who ran unsuccessfully for the city councillor role in Wards 9 & 10, had 493 infractions. He won just 1,327 votes, receiving the least amount of ballots among the six candidates, and a bill for $12,325 for the fines.

Ahead of the election, each candidate’s campaign was required to undergo a compulsory information session by the City Clerk’s office with the aid of by-law officials. During the mandatory session, information on by-law restrictions were provided and candidates were able to ask questions (the presentation was also emailed to them).

Among elected councillors, Toor has the most violations, followed by Navjit Kaur Brar with 177, Dennis Keenan with 100, Martin Medeiros with 67, Michael Palleschi with 50, Rowena Santos with 18, Harkirat Singh with 17, Paul Vicente with 15, Pat Fortini with 10, and Rod Power with 6.

Keenan, Palleschi, Medeiros and Brar had the highest number of violations in their respective races.

In an interview, Power, responsible for the least number of violations among elected councillors, said that throughout the election he used a master spreadsheet with the name, address and phone number of every person that agreed to a sign on their lawn. He also used this as reference when it came time to collect the signs.

“There's nothing really that hard, it's simple and straightforward really, follow the rules which are clearly defined, and you shouldn't have too much issue,” he said.

“Regional Councillor Pat Fortini and I were very diligent working together in regard to signs, we were very hands on putting them out and picking them back up. We knew we would have a few infractions, that's normal because there's somethings you can't control like wind, grass cutting, vandalism, etcetera.”

A staff report from 2021, authored by Elizabeth Corazzola, manager of zoning and sign by-law services, noted that a large number of complaints came from signs that had been placed on public property including boulevards and parkland. Other complaints were for excessive signage on residential and non-residential properties, billboards exceeding 2m² in sign area, signs placed on City fences or noise walls and signs displayed for more than 72 hours after the close of the election. 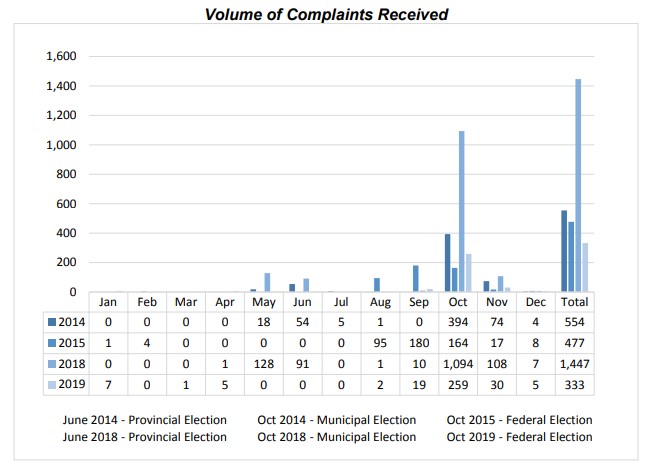 The motion to ban outdoor election signs on November 23 was passed alongside another, shorter-lived motion, clearing all candidates of fines and by-law violations incurred. Each violation carries a $25 fine the candidate responsible for the sign is required to pay. The eight members who initially tried to avoid paying their own fines, through a vote they took themselves, was likely a violation of provincial conflict of interest legislation which prohibits municipal council members from taking votes that benefit themselves financially. Santos, Brown, Palleschi, Vicente Singh, Brar, Keenan and Toor all voted to excuse the fines, while their names were not made public for their own violations (the FOI documents obtained by The Pointer show Brown has to pay $8,325 in fines and Toor has to pay $7,250). Medeiros, Fortini and Power refused to support the motion to excuse the fines, which Singh had brought forward.

After public backlash, those who tried to excuse the fines backtracked and their motion was rescinded.

A summary of the FOI documents obtained by The Pointer: 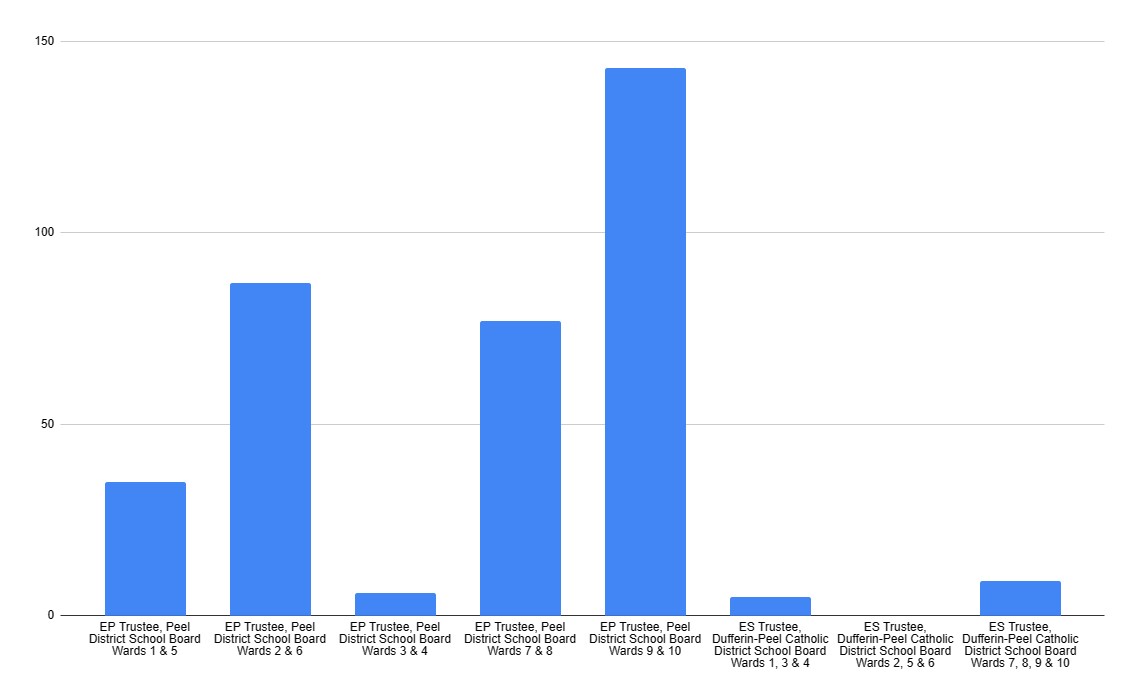 Data for school board trustees show violations for Wards 9 & 10 continue to be high, similar to the data for council candidates.