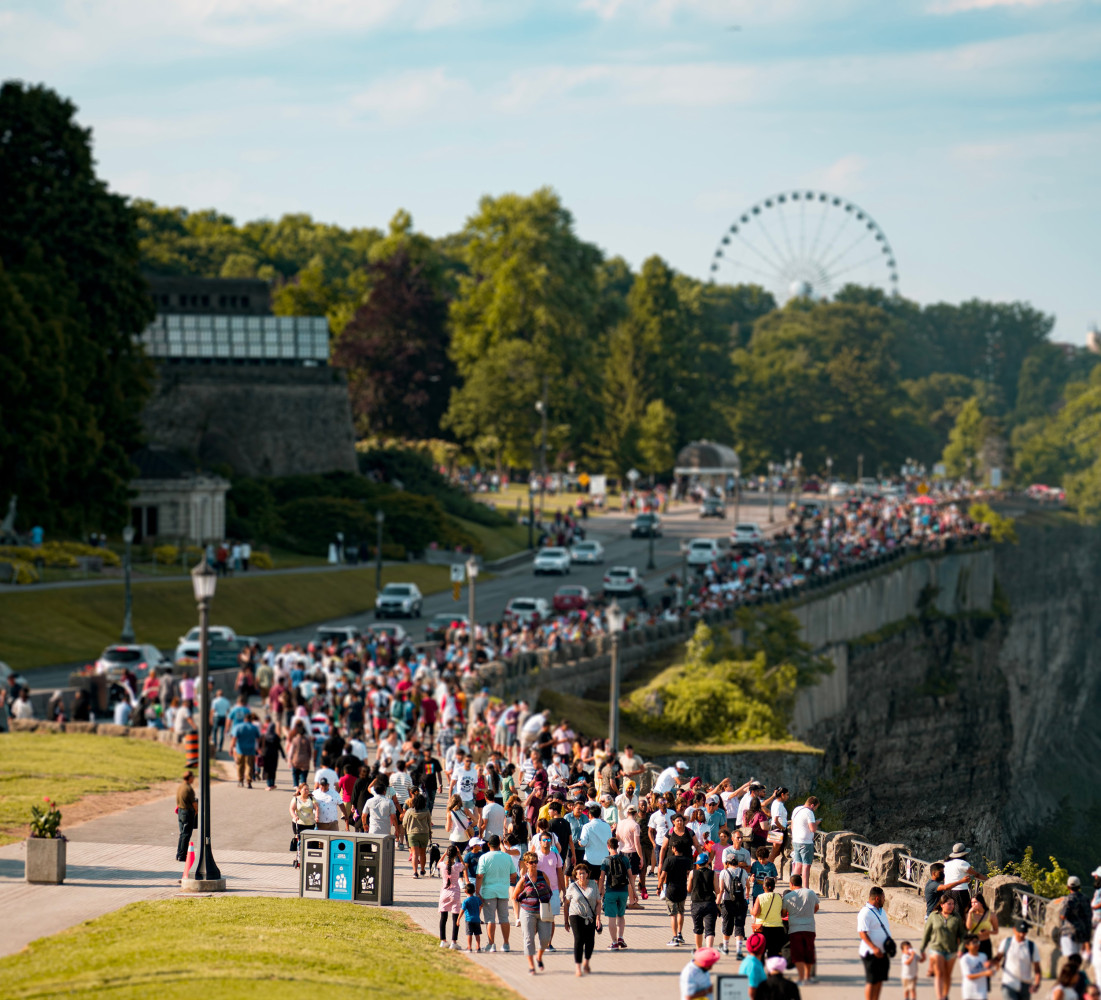 It is mid-October, 2017. The days are getting shorter, the evenings darker and colder. It is approximately 8:20 p.m. and five officers with the Niagara Regional Police are approaching the Canada’s Best Value Inn on Ontario Street in St. Catharines.

The motel, a squat, two-storey structure with 64 rooms, is splashed with bright fluorescent and neon lights from surrounding businesses that cash in on traffic to and from the world famous falls. The constant lines of cars on the QEW are a stone's-throw away.

The setting is why the traffickers chose to set up here for a night with two underage girls.

The officers had received an anonymous tip, and when they enter the hotel room, they find two men and two young girls—both under the age of 18.

The men are immediately arrested, charged with a list of human trafficking offences, and the two young girls are questioned.

“That guy’s your pimp,” one of the officers presumes. One of the girls, shivering in the October cold, denies the accusation.

Due to amendments to Canada’s Criminal Code made in 2014, which effectively decriminalized the selling of sex, but still made it illegal to buy or exploit someone for the purpose, the two girls were not in any real trouble. But for the police, they could be valuable sources of information, even witnesses for a future trial.

These temporary lodgings offer the privacy, and setting to necessitate the business of illegal sex.

The Human Trafficking Unit of the Niagara Regional Police Service is tasked with rooting these traffickers out of their warrens, but it’s a near impossible task for a small unit in one of Canada’s busiest tourist destinations. There are thousands of people coming and going, and millions of places to hide. It’s an insidious landscape.

“The network of highways that allow the ease of access to the region, it drives up the ability for clients to attend for sexual services…which drives the demand to provide them,” explains Det./Sgt. Ryan McComber, head of Niagara police’s human trafficking unit. The large number of tourist accommodations, combined with the spike in the number of short-term accommodations offered through services like AirBnb, which offer more anonymity than traditional hotels, create another smokescreen officers have to search through.

By year's-end, McComber estimates the unit will have investigated more trafficking incidents in 2022 than the prior two years combined. This is despite the region’s tourism sector not having fully recovered from the COVID-19 pandemic, and visitor numbers remaining below pre-pandemic levels. It’s estimated Niagara Region gets anywhere between 12 million and 14 million tourist visits every year, driven by a wide-range of entertainment venues, the pull of the area's countless vineyards, wineries, restaurants and the natural beauty of Niagara Falls.

The hordes of people provide traffickers a lot of room to blend in with the crowds, making them the proverbial needle in the haystack. But finding them, and finding them quickly can help rescue the victims who are horrifically exploited.

“It’s a kind of abuse that is almost impossible to describe,” Monica Riutort, the manager of the Peel Institute on Violence Prevention, previously told The Pointer. “Human trafficking is almost like constant torture.”

The quicker investigators are able to identify, track and free someone being held in this nightmare, there is, potentially, less trauma that will be inflicted on that individual.

It’s a heavy responsibility for a small unit of officers.

Four officers to monitor nearly 1,900 square kilometres; hundreds of hotels and motels—not to mention the large number of Airbnb rentals popping up constantly in the area—and four land border crossings.

This is just the physical realm.

The Human Trafficking Unit estimates approximately 100 advertisements are posted online every day for sexual services, any of which could be linked to human trafficking.

To make matters even more complicated, sex trafficking is only one form of human trafficking. There is also labour trafficking, which with the abundance of agricultural operations in the region, is also a very real threat. McComber says the unit is currently in the midst of an ongoing labour trafficking investigation.

The unit has been operating above its capacity since it first began catching criminals in 2019. Since then, 23 individuals have been arrested for human trafficking, and eight women have been saved from active trafficking situations by officers.

There has been a notable spike in activity in 2022. When The Pointer spoke with McComber at the end of October, he said the unit had arrested 12 individuals for human trafficking since January, laying 38 charges.

There is always a fear that officers are only uncovering a small segment of the criminal enterprise spreading across the region.

Cases of human trafficking have been consistently increasing in Canada over the last 10 years.

Data released by Statistics Canada earlier this month show that throughout 2021, Ontario remained one of the human trafficking capitals of Canada—mostly due to its sizeable population which can drive up statistics, but also, because traffickers favour dense cities with more potential customers. Being one of the busiest tourist destinations in the province with one of the highest rates of human trafficking in the country, Niagara has the unfortunate distinction of being a perfect location to meet the increasing demand for these sorts of criminal acts.

“My (budget) request will continue to increase the resources that are available to the unit. With the addition of investigators there is the capability to investigate more incidents and help more people,” McComber says.

The workload and financial realities of policing—it's very difficult to hire more officers without creating the need for more support positions elsewhere in the organization—means departments need to get creative when it comes to expanding their reach.

One method is providing the knowledge and resources for the community to effectively become eyes and ears for the police, making it easier for regular citizens to spot potential incidents of trafficking when they are staring them in the face.

Many people in Canada admit they would not be able to spot a sign of someone being trafficked even if it was placed directly in front of them.

The Canadian Centre to End Human Trafficking, a national organization dedicated to raising awareness about this crime in Canada, operates the national human trafficking hotline which receives tips about potential trafficking situations and dispenses much needed information for friends or parents looking for help with a loved one. It found in a 2021 survey that 77 percent of Canadians feel they would be unable to identify the signs of someone being trafficked if it was happening in front of them. A 2020 survey completed by CivicAction found that what Canadians think they know about human trafficking are based on cliché and misconception. The survey reported nearly three quarters of Canadians (73 percent) believe human trafficking begins with a kidnapping off the streets, and 47 percent believe it involves being kidnapped and forced into the sex trade. An even larger majority, 85 percent, believe sex traffickers are typically strangers to their victims.

This could not be further from the truth.

Between 2011 and 2021, of victims and survivors identified in police-reported cases of human trafficking, 91 percent of them knew their trafficker.

“People knowing their trafficker seems to be the more common scenario for us in Niagara,” McComber says.

This speaks to an immediate need to educate the community about what human trafficking really is, and how to spot the potential warning signs.

McComber’s unit spreads this valuable information through presentations to community stakeholders and gets assistance from other service providers dedicated to helping survivors of human trafficking.

For example, in September, the Niagara Sexual Assault Centre launched a free online training program for those working in Niagara’s hospitality sector to help them better identify the potential signs of human trafficking and learn how to help.

A report published in 2018 by Polaris, a nonprofit organization in the United States dedicated to combatting sex and labour trafficking in North America, noted that there are many misconceptions about the hotels chosen by traffickers to conduct their business.

“Contrary to popular misconception, trafficking does not only take place in cheap hotels or motels with sub-par accommodations. Instead, traffickers running in-call escort businesses look for a range of factors including convenient locations, buyer comfort, price, a hotel's policies, procedures and infrastructure and whether the hotel is prone to law enforcement monitoring,” the report states. “Survivors in Polaris focus groups also mentioned that these hotels are perceived by traffickers to have distracted and busy staff, which allows trafficking to go undetected.”

The report also found a dire need for training within the hospitality sector. The vast majority (94 percent) of survivors surveyed by Polaris said they never received any help or signs of concern from hotel staff.

“There is a need for more formal and consistent protocols within hotels and motels to better facilitate victim identification. The number of potential victims identified at a hotel is unfortunately still dwarfed by the number of cases reported to the National Hotline that reference exploitation occurring on these properties,” the report states.

Fixing this knowledge gap could create a significant number of additional eyes and ears on the streets and in the hallways of Niagara to assist police.

According to data from Niagara Economic Development, the accommodation and hospitality sector is one of the region’s largest employers, accounting for close to 40,000 jobs in 2018. There were a total of 351 businesses registered as providing “traveller accommodation” in Niagara in 2018. Now could be a perfect time to implement such training programs as the sector sees a large influx of new hires following the COVID-19 pandemic. 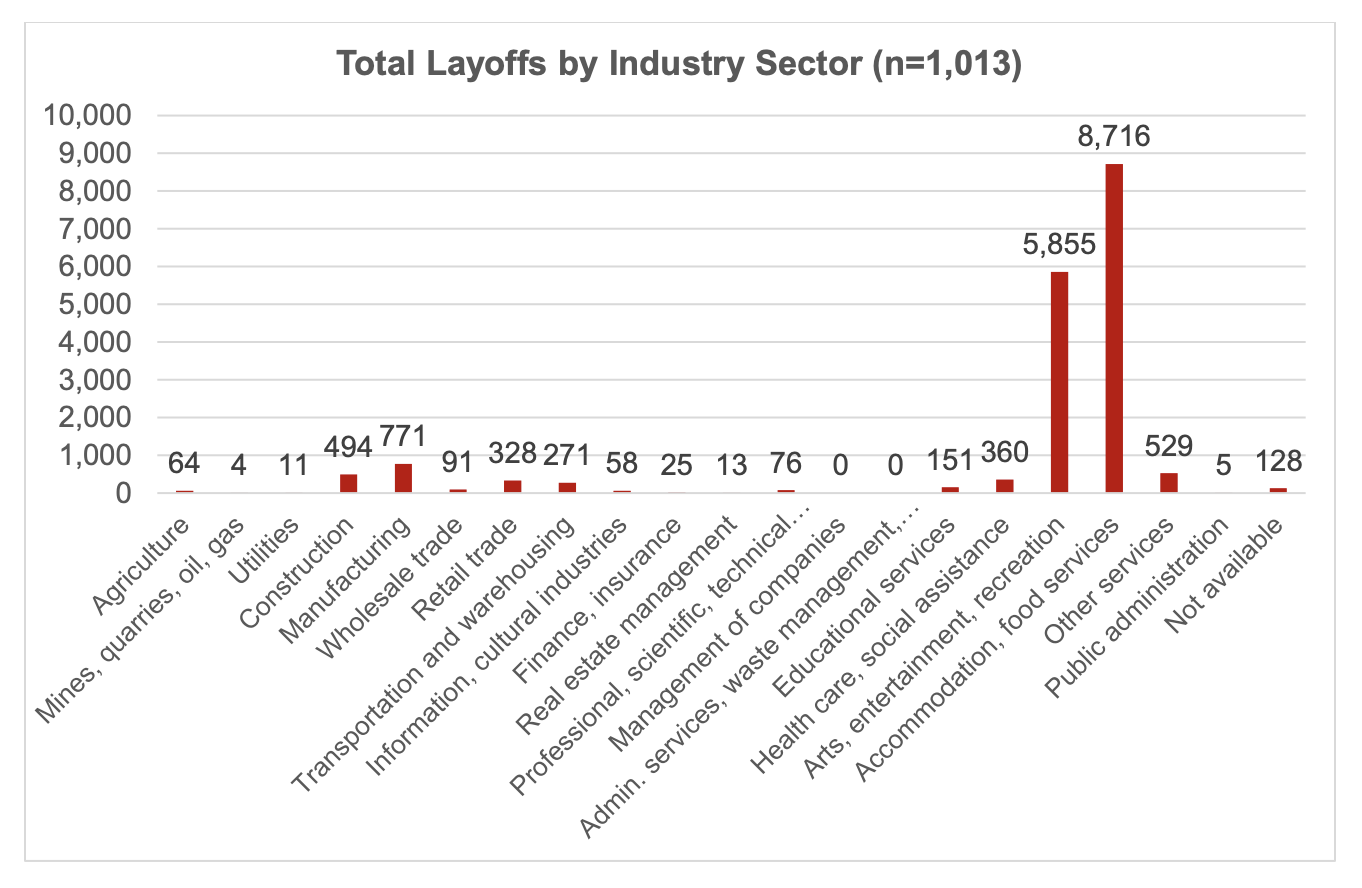 The accommodation and food services industries in Niagara Region were the hardest hit in terms of layoffs at the start of the COVID-19 pandemic.

Niagara Region data show the accommodation and food services sector was the hardest hit in terms of layoffs as a result of COVID-19. As these businesses begin to recover and hire back those who were let go, or bring on new employees, implementing human trafficking education as part of any typical training regime could literally save people’s lives.

Part of Canada’s national strategy to address human trafficking, launched in 2019, includes direction to create training tools for frontline staff, like those in the hospitality and transportation sectors, that are more likely to cross paths with traffickers and their victims. In July, a spokesperson for Public Safety Canada told The Pointer these training tools were currently being produced and will be made public on the government’s website once completed. They have yet to be made public.

Other potential solutions including mandating the posting of the national human trafficking hotline on all hotel and motel properties—which some jurisdictions in the U.S., like New York (on the other side of the falls), have done.