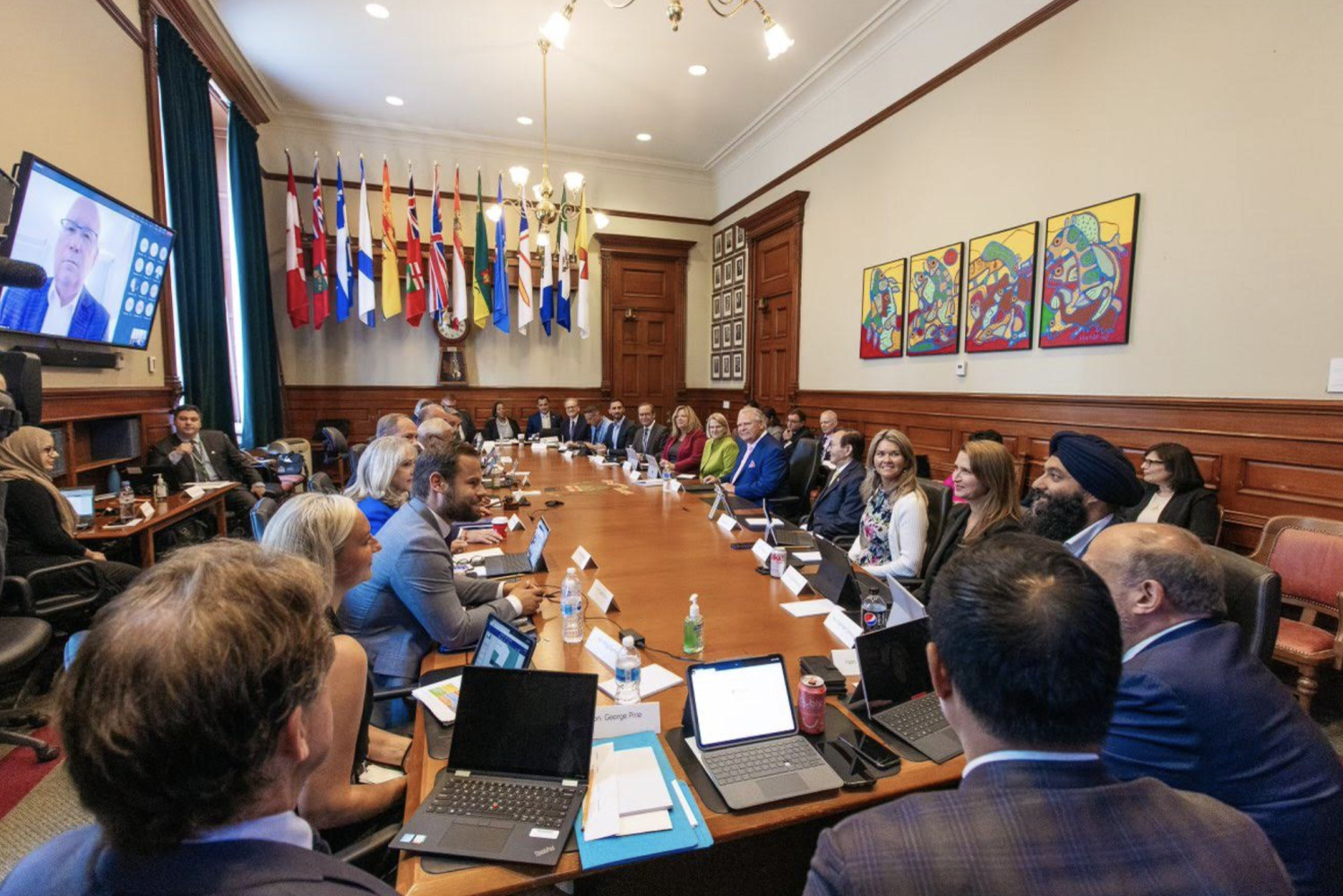 Groups are now speaking out against the disturbing behaviour of the party in power.

“First Nations have been given no opportunity, nor the adequate capacity to be consulted regarding the tabling of Bill 23 and its significant changes to Ontario’s legislative and policy landscapes. The Government of Ontario’s tabling of Bill 23 is a blatant violation of First Nations’ inherent, domestic, and international rights over their ancestral and traditional territories,” Ontario Regional Chief Glen Hare said. “Bill 23 will inevitably harm Ontario’s environmental heritage and weaken land and water environmental protection.”

On November 23rd, Chiefs of Ontario released a statement describing Bill 23 as a clear violation of Indigenous constitutionally protected, inherent and Treaty rights that will cause ‘inevitable adverse environmental impacts’ on First Nations ancestral and traditional territories.

Chief Hare is responsible for speaking on behalf of the 133 First Nations across what we know as Ontario.

“It is deeply concerning to the Chiefs of Ontario that the mandate of the Indigenous Affairs Ontario (IAO) office, which is to ensure collaboration amongst ministries engaging and consulting with First Nations on policy and legislative changes, continues to be unfulfilled,” Chief Hare said in the statement. 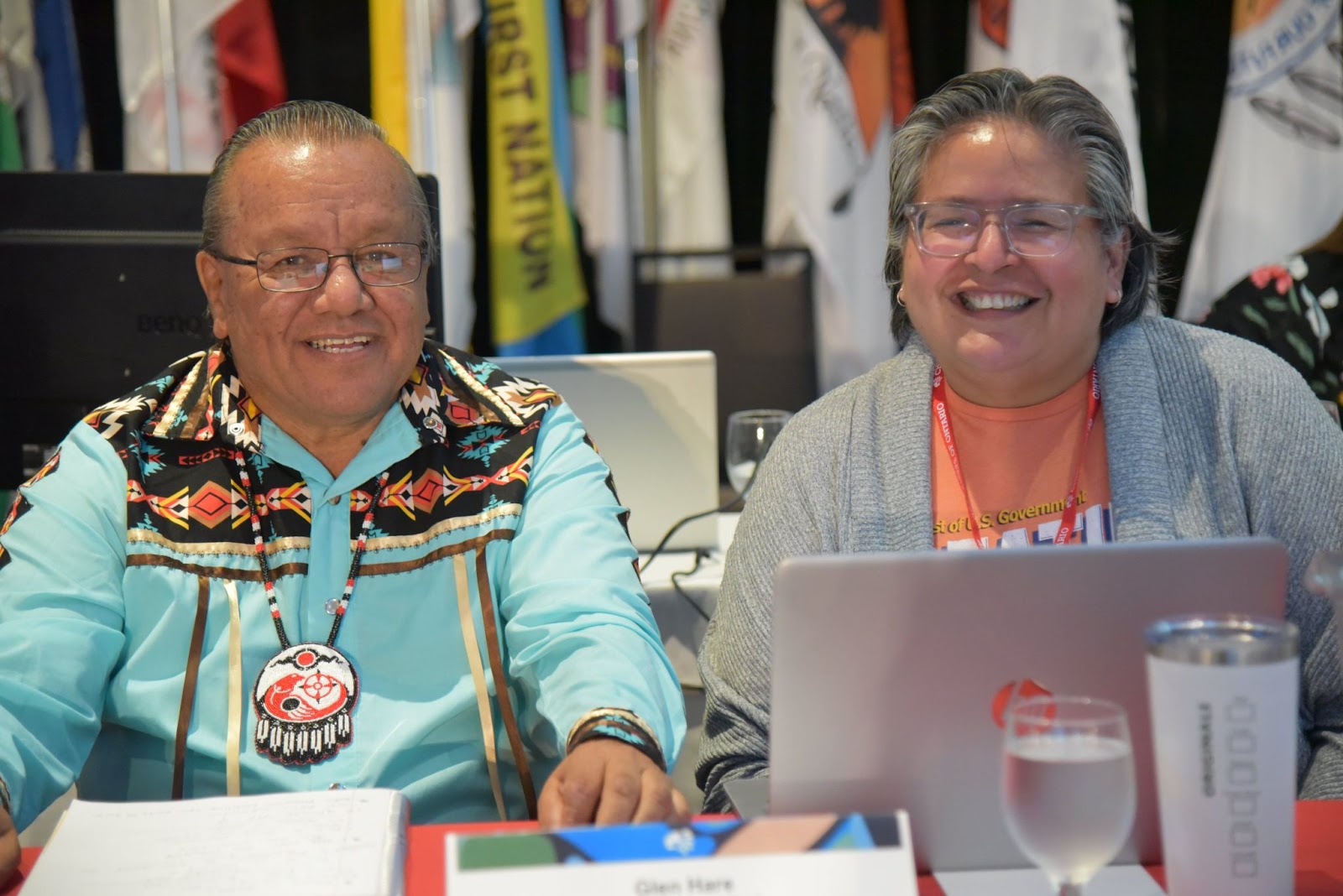 A citizen of M’Chigeeng First Nation on Manitoulin Island, Regional Chief Glen Hare (left) was elected in June 2021 at the Chiefs of Ontario All Chiefs Conference.

Section 35 of the Constitution Act, 1982, recognizes and affirms the existing rights of Indigenous peoples, communities and treaties.

The duty to consult is owed to First Nations, Inuit and Métis as rights may be affected by contemplated Crown conduct and the responsibility to protect these constitutionally protected covenants rests with the Crown and the executive branch of both provincial and federal governments.

Chief Hare stated, “First Nations are not stakeholders; we are sovereign Nations and are entitled to proper consultation based on the United Nations Declaration on the Rights of Indigenous Peoples (UNDRIP) and mutual respect.”

Endorsed by Canada in 2010, UNDRIP reaffirms the need for free, prior and informed consent to conduct effective consultations with affected Indigenous peoples and communities in order to ensure established treaty rights are upheld.

A provincial bill needs to pass three readings. Once the government passes the third reading it receives Royal Assent and becomes law. Before it even reaches the House, there is ample time to seek proper and informed consent from all advisory bodies that might be affected. First introduced in late October – despite rising opposition from various organizations and stakeholders across the province – Bill 23 passed its third reading just over 30 days later on November 28. 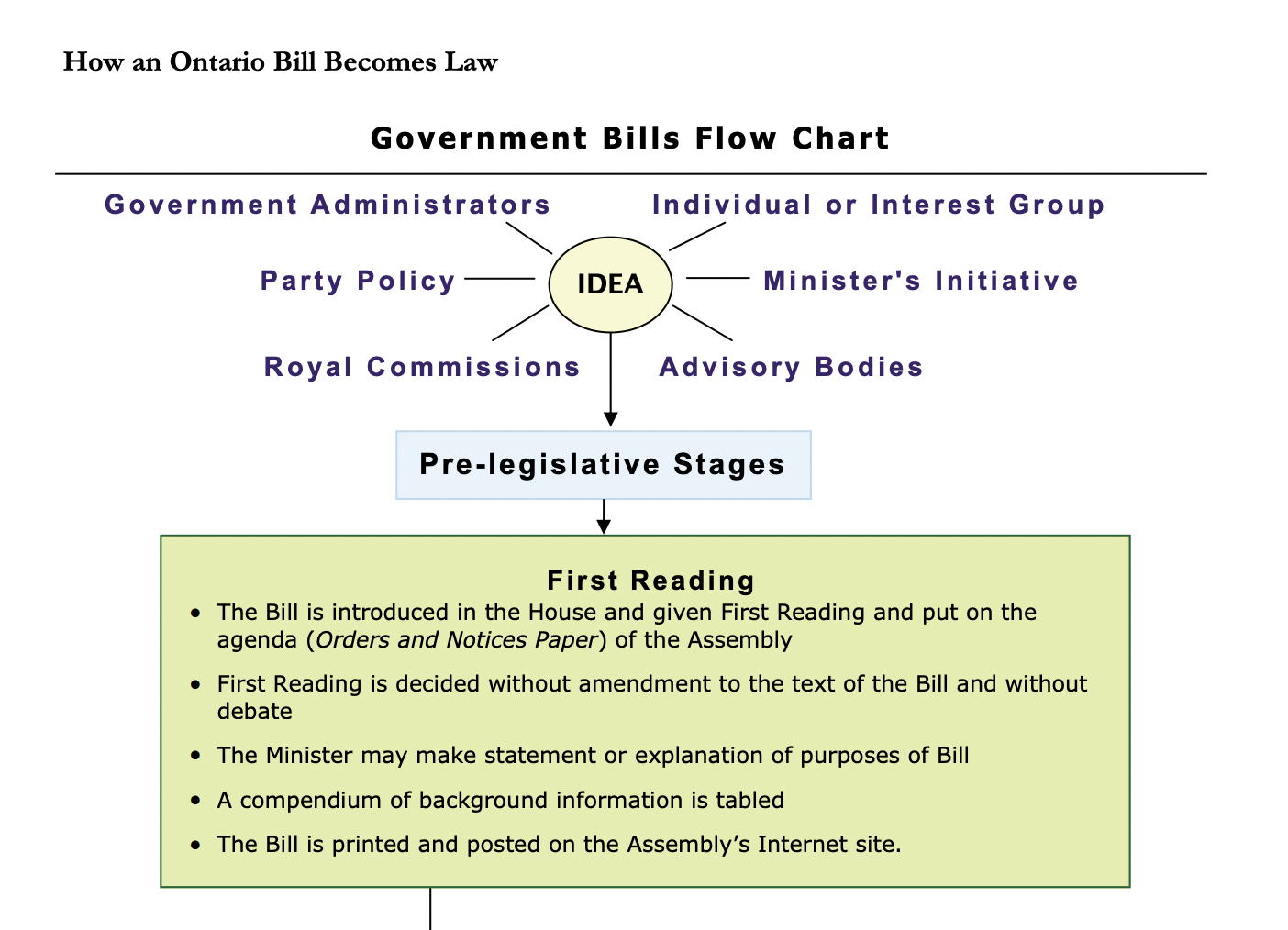 Before a Bill is introduced in the House, the Office of the Law Clerk and Parliamentary Counsel will certify that it is acceptable and in compliance with legislative and parliamentary conventions – giving many opportunities for proper and effective consultation. (Legislative Assembly of Ontario)

Moments after it received royal assent, Minister of Municipal Affairs and Housing Steve Clark said the government will now begin consultations with affected Indigenous peoples and communities—confirming that the PC government did not consult with First Nations prior to introducing, reading, or passing the Bill—a clear violation of the duty to consult doctrine.

The day the Bill passed, Chief Hare told Queen’s Park, "First Nations are in the best position to identify the necessary measures to mitigate or prevent adverse environmental impacts. We are concerned with Clark's comments to 'deal' with First Nations by way of requesting after-the-fact commentary regarding the passing of Bill 23.”

"As we have said time and time again, the Government of Ontario cannot avoid its duty to consult with First Nations by delegating responsibilities and obligations to municipalities.”

Kiiwetinoong MPP Sol Mamakwa, who serves as the NDP’s Indigenous Relations and Reconciliation Critic and the party’s Deputy Leader, criticized the Bill at Queen’s Park, comparing it to colonialism.

“First Nations across Ontario have stated their opposition to Bill 23 due to the clear violation of First Nation’s constitutionally-protected inherent and Treaty rights. It’s 2022. It’s very colonial for Ontario to abuse their power by making these bills without consultation or engagement with First Nations,” Mamakwa said.

Ontario’s Minister of Indigenous Affairs and Minister of Northern Development, Kenora—Rainy River MPP Greg Rickford, explained that the government sees the Bill as an opportunity to build more homes for more families and address a growing housing crisis.

Previous reporting states Rickford has claimed the government has been consulting with First Nation communities and the PCs have “no plans” to back down from their housing initiative.

Jeff Monague, an Ojibway elder and knowledge keeper, writing in in a column in Orillia Matters, states Bill 23 will 'accelerate the demise' of Ontario.

Two days after it became law, Chief Kelly LaRocca of the Mississaugas of the Scugog Island First Nation (MSIFN) released a statement sharing her community’s ‘disgust’ with Minister Clark’s disrespect for Indigenous rights and strongly condemned the Ford government’s “blatant disdain for the democratic process”.

"This is by no means the first time that the Ford government has refused to carry out its constitutional duty to consult with Indigenous Peoples," Chief LaRocca said. "It is appalling that the Minister so cavalierly referenced that his government did not uphold its duty to consult. Only now that the horse is out of the barn is the Minister trying to close the door and offer consultations after the Bill has passed."

Since Doug Ford became Premier in 2018, reports have highlighted multiple instances of the failure to consult with Indigenous peoples and First Nations, despite legal requirements to do so: 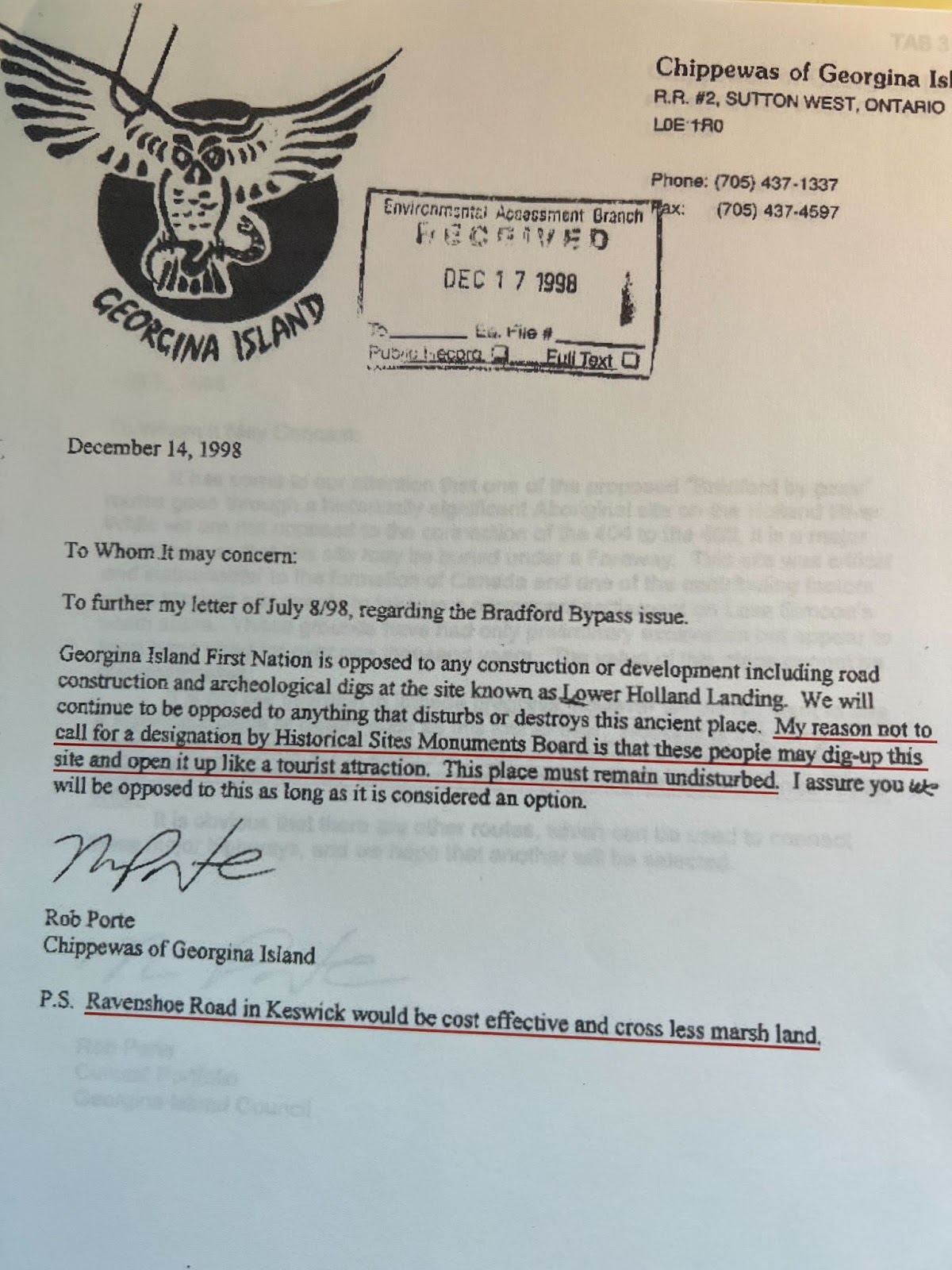 The duty to consult began with the Constitution Act, yet the standard for consultation in what we now know as Canada was set in a Supreme Court trilogy of decisions in the legal cases of Haida Nation v. British Columbia (Minister of Forests), Taku River Tlingit First Nation v. British Columbia (Project Assessment Director), and Mikisew Cree First Nation v. Canada (Minister of Canadian Heritage).

The Parliament of Canada states that, “Court orders to remedy a failure to meet the duty to consult vary significantly according to the situation. Various forms of relief are available when the Crown fails to meet its duty to consult, ranging from injunctions (prohibiting an action from moving any further), to damages (monetary compensation), to an order to carry out the consultation (or to engage in deeper consultations).”

Historically, the federal, provincial, and territorial governments did not consistently consider the impacts of certain actions or decisions on Indigenous communities. As a result, the duty to consult can be viewed as a response to a history of the imbalance of power between governments and First Nations, Inuit and Métis peoples in what we now know as Canada.

Regardless of the severity of the potential infringement of those interests or rights by a government decision or action, consultations must always be carried out in good faith with the intention of effectively addressing the concerns of the Indigenous peoples whose lands or Treaty rights are at issue.

The rushed Bill 23 is more proof that many governments continue to disregard their obligations under law. The PCs might now face constitutional and other legal challenges that could force them to repeal the controversial housing legislation, until they respect the rights of Indigenous peoples and First Nations across the province.