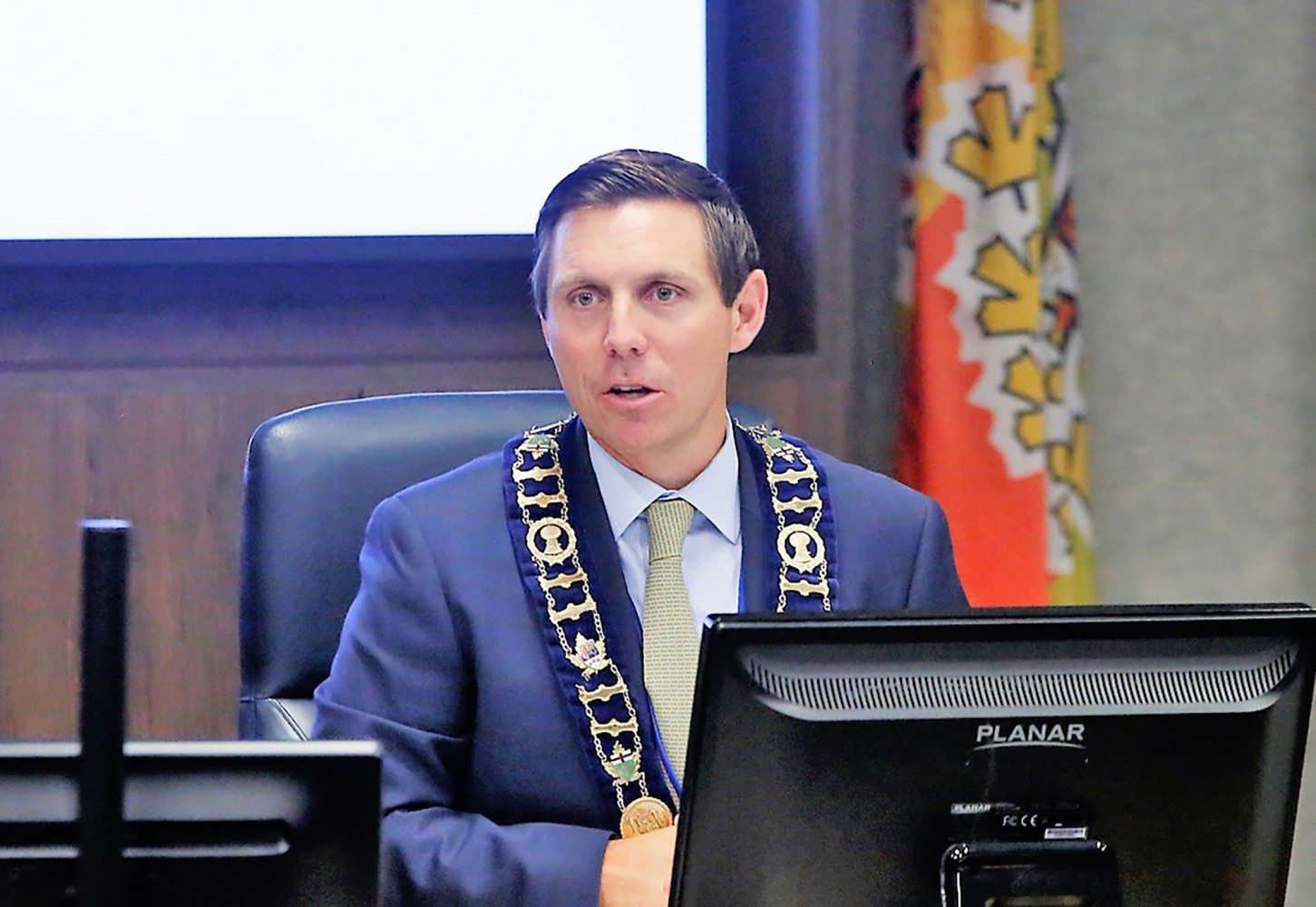 Patrick Brown has deleted a tweet that shows he used work invoiced to the City of Brampton in his failed federal Conservative Party leadership bid.

Brown has also been fined $100,000 by the federal Conservative party, while the Office of the Commissioner of Canada Elections investigates his CPC leadership campaign finances. His social media expenses and invoices sent to the City of Brampton have also reportedly been forwarded to the Commissioner's office, as it carries out its investigation into Brown’s federal campaign finances.

The Toronto Star first reported the fine on Wednesday, after Brown received a letter last week, ahead of Monday’s municipal election, notifying him that $100,000 has to be paid for allegedly violating campaign finance rules, according to the Star’s reporting.

Brown did not disclose the fine ahead of Monday’s election, which he won.

He was disqualified from the CPC leadership race in July when the Party cited "serious allegations of wrongdoing" around campaign financing rules. The CPC (Conservative Party of Canada) said it forwarded its evidence and referred the matter to the commissioner of Canada Elections.

In a statement, Gary Collins, Brown’s director of communications at City Hall, said the mayor hopes the Party will return the funds raised from Brown’s Conservative Party supporters.

“Mayor Brown is entirely focused on Brampton and is no longer interested in the back room games of the Conservative Party,” Collins wrote, under his title as the mayor’s communications director, a role he has held at City Hall since Brown first became mayor. “He does hope the party will return the hundreds of thousands in donations the party has collected from the Brown donation portal to the donors as it was collected on false pretenses by the Party. These donations were made in the spring and were intended to support a candidate intent on making the party more progressive and more moderate. It is wrong for the party to keep these donations.”

It’s unclear why the statement, regarding the CPC and Brown’s ongoing battle with the Party, came from his director of communications in the mayor’s office. Collins was asked to explain why his taxpayer funded role was used to deal with Brown’s federal political affairs. He did not respond.

Brown did not respond to questions.

Brown was disqualified from the federal Conservative Party leadership race following allegations that he violated federal election laws including using a third-party to pay a campaign staffer and money orders to pay for memberships that are supposed to be paid by the individuals joining the Party.

After a freedom of information request filed August 5, The Pointer received 3,047 pages of invoices from Brown’s office indicating the City of Brampton was invoiced for some of his CPC leadership campaign social media work.

Invoices from Mississauga based firm, SolarIt Solutions, detail the work it invoiced the City for. 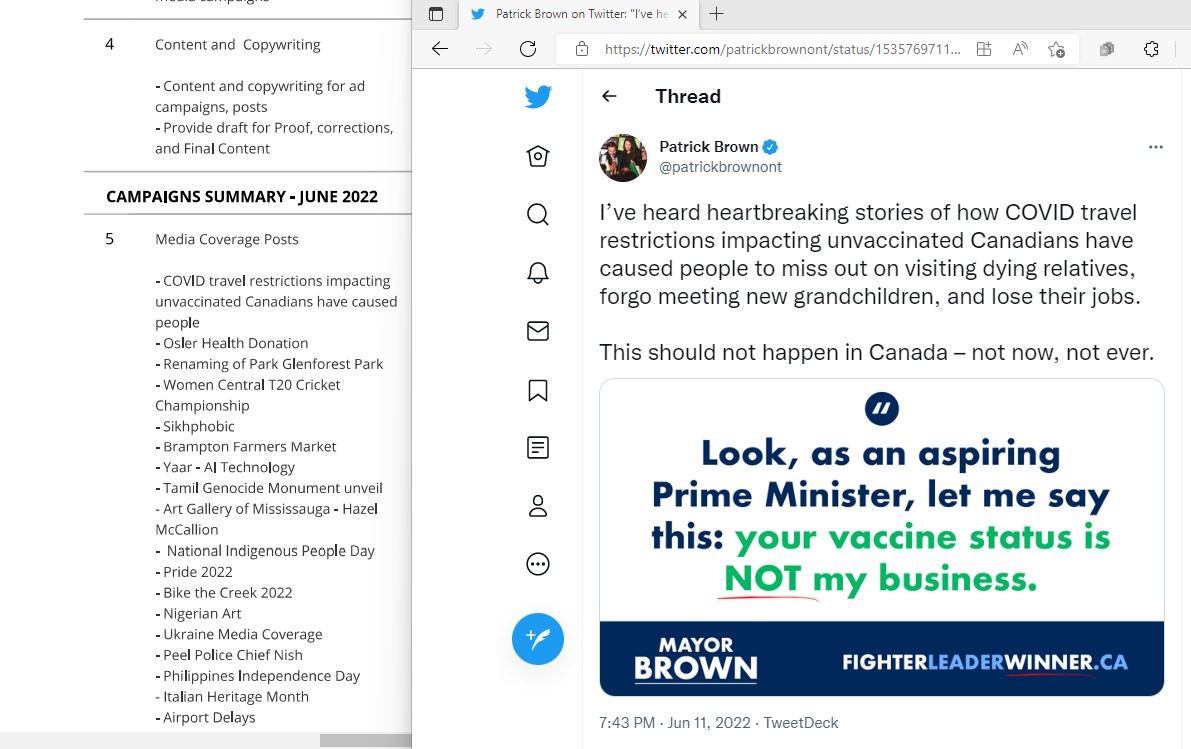 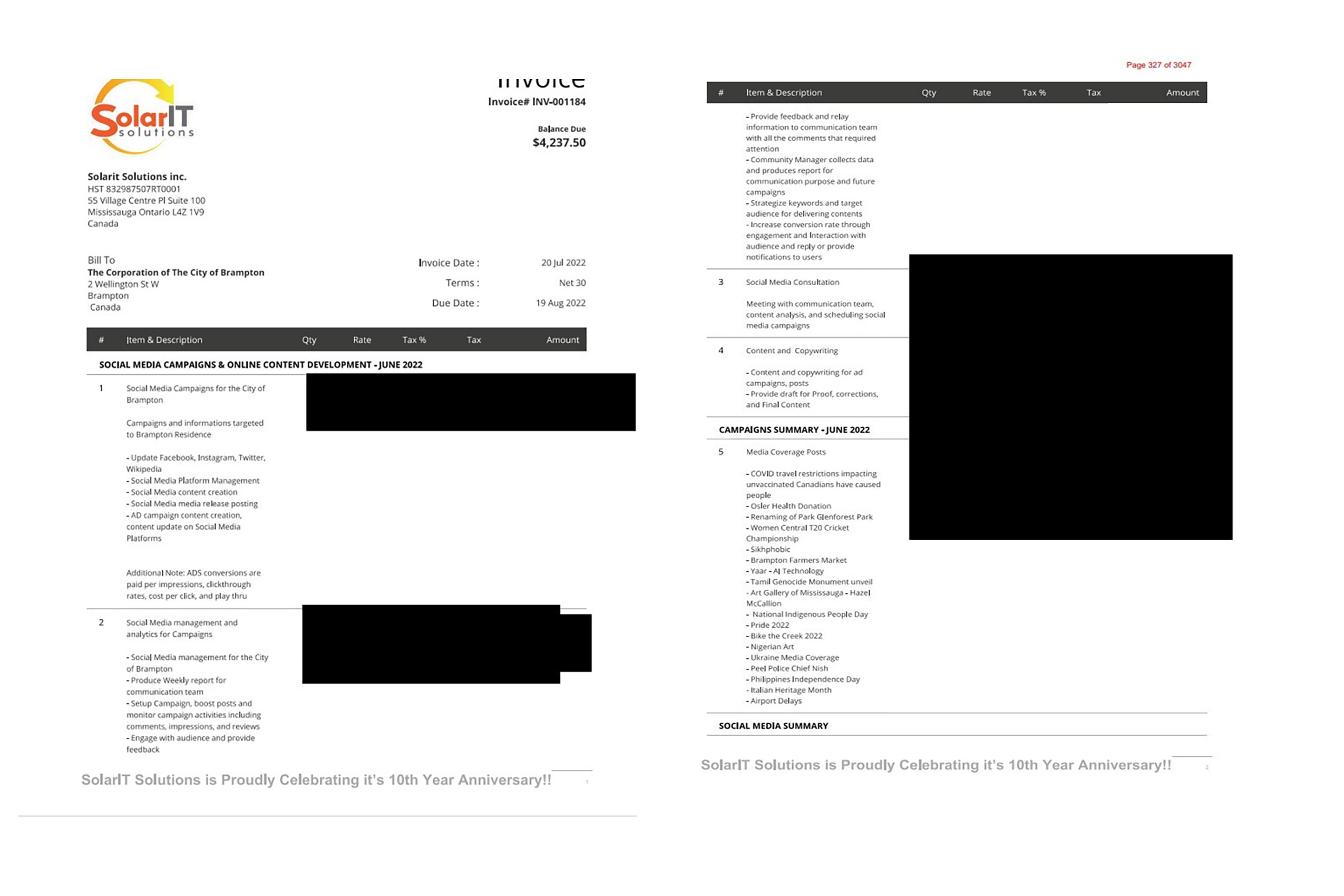 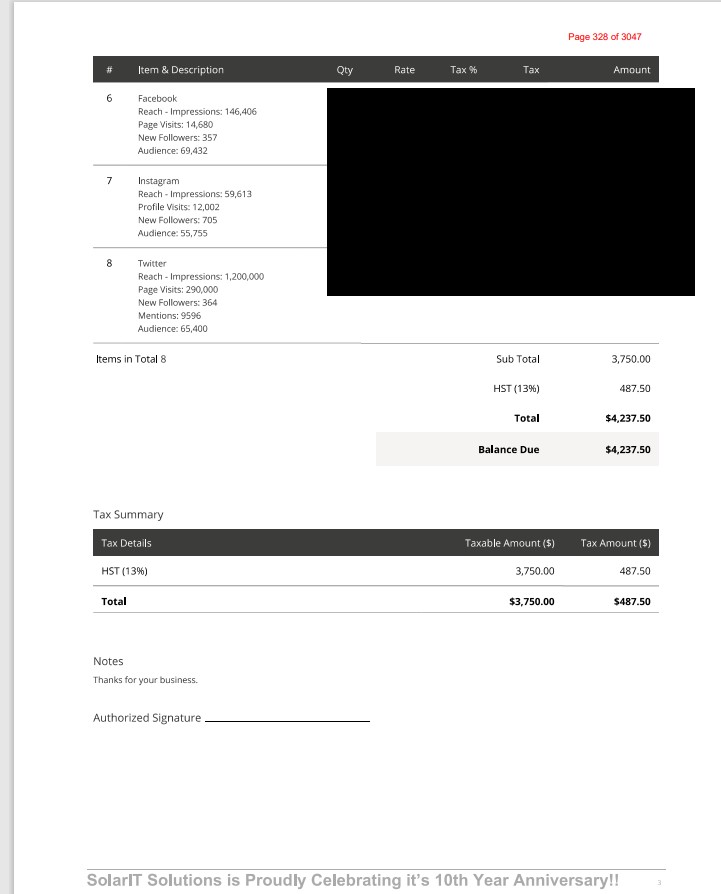 Social media posts by SolarIT Solutions shown in the invoices include some related to Patrick Brown’s CPC leadership campaign. The June invoice includes one of those posts.

Wording in the tweet shown above by Brown, on June 11, which was for his CPC leadership campaign, matches wording in SolarIT’s invoice that describes the work it did in June, for the City of Brampton.

According to the Star’s reporting (which has not been verified by The Pointer) Brown’s social media expenses during the CPC campaign were forwarded to Office of the Commissioner of Canada Elections investigators, who have been in contact with the Party as recently as this month.

Since The Pointer’s article on October 21, which highlighted some of his Twitter posts, including the one on June 11, it appears to have been deleted from his account.

Brown appears to have erased it (as both of the previous links show) despite the possibility that Office of the Commissioner of Canada Elections might investigate his social media use during his CPC election campaign.

Expense statements show Brown’s office social media spending went up from $9,880.76 for all of 2021 to $16,943 for just the months of March and April in 2022, while he was campaigning to be the CPC leader, paid to SolarIT Solutions.

During Brown’s CPC leadership campaign (up until his disqualification in July) his social media accounts featured posts for his federal Party election race. Charges to the City of Brampton for his social media during this period went up almost ten times compared to 2021.

Office of the Commissioner of Canada Elections investigators, according to the Star, are now aware of Brown’ social media spending during his CPC campaign, and the invoices to the City of Brampton.

In a statement to the Star, Brown called The Pointer's reporting “false,” and stated that a separate company did leadership advertising.

Brown has not responded to The Pointer.

In response to the original reporting, SolarIT Solutions sent a statement to The Pointer.

“The Pointer has made false allegations that Solarit Solutions was paid using City funds to post a Tweet on Patrick Brown’s Twitter account related to the federal leadership campaign,” the company wrote. (The Pointer reported that other tweets featured by Brown during his CPC leadership campaign matched wording included in SolarIT’s invoices to the City of Brampton.)

The company’s head, Srinikanth Pannerselvam, wrote to The Pointer: “SolarIT Solutions provides a media and social media monitoring service for our clients, work which captured the tweet you have referenced, in a summary for the Mayor’s Office.

The Pointer has not alleged any wrongdoing by SolarIT. The FOI documents show the firm invoiced the City for work it had done. It was Brown’s responsibility to ensure his CPC campaign followed all spending rules.

SolarIT did not respond to questions regarding the firm’s email to The Pointer, which suggests work it did that matches wording used in Brown’s CPC campaign was done for free, despite the company time that was spent. 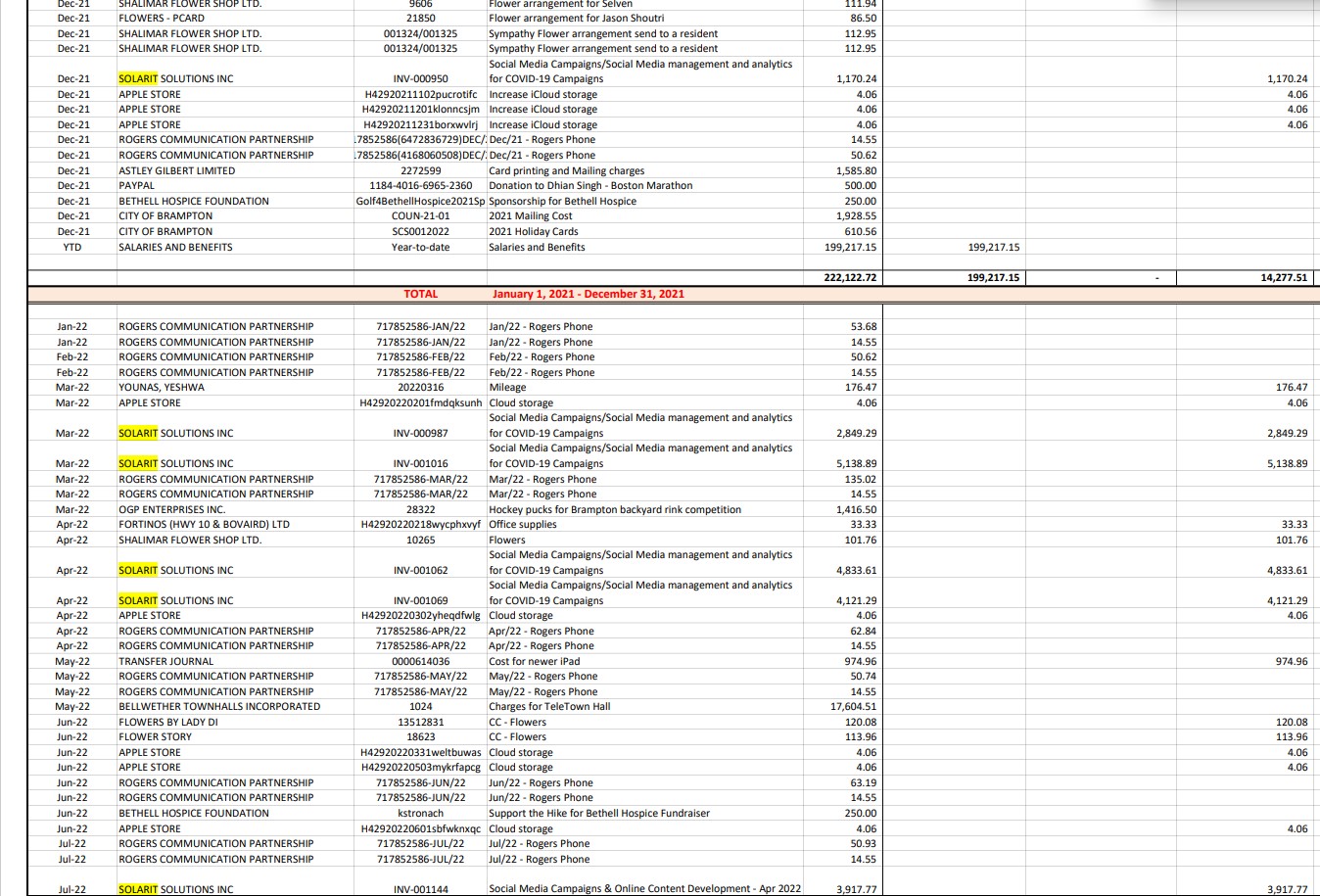