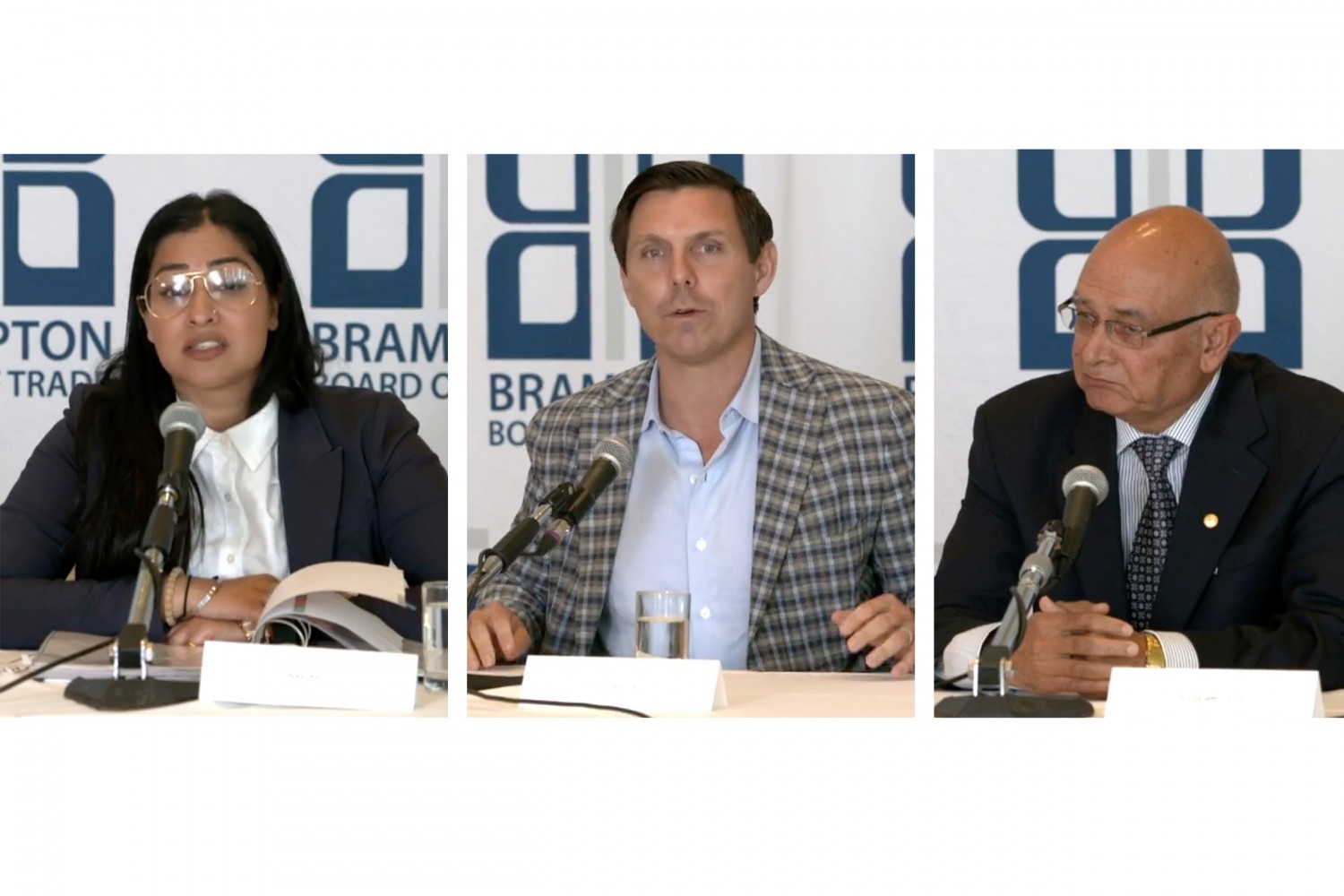 Images from Brampton Board of Trade

Nikki Kaur and Vidya Sagar Gautam shared the debate stage with Patrick Brown Tuesday, during the Brampton Board of Trade’s mayoral debate, with crime and Brown’s controversial time in office dominating the event.

“I’m proud to stand with the police and I’m honoured to have the support of the Peel Police Association and I will continue to stand with them to do everything I can to keep our community safe,” Brown said, addressing growing concerns around public safety.

But he was challenged throughout the debate by Kaur who questioned how Brown expects to address Brampton’s problems while he refuses to make badly needed investments.

“The biggest things we need to immediately address is the crime rate,” Kaur said. “The streets no longer feel safe, violent gun crime is going up in the city and our neighbourhoods don’t feel safe. As I grew up in the city, I’m from Brampton, it has never been like this. We used to play on the streets and it was safe to do so.”

Gautam called Chief Nishan (Nish) Duraiappah a “really well qualified and intelligent person” and said that if he was mayor, he would work with the Peel Regional Police on selective targeting of organized gang activity. 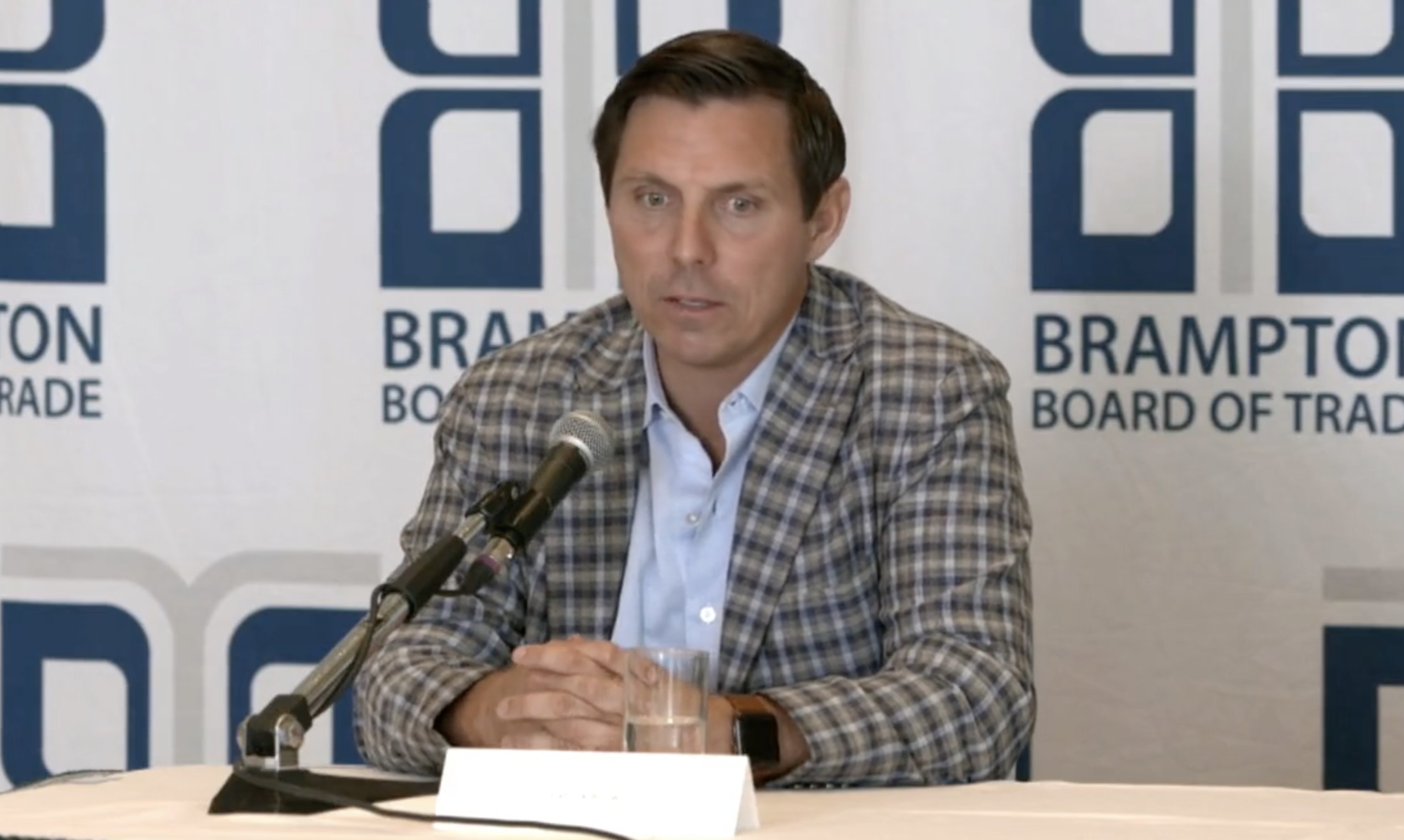 (Brampton Board of Trade)

“I want all of the civilized members of the city, members, please support the police and give the information to the police. We are behind you, nobody will touch you.”

Kaur said she would hire 100 new Peel Police officers and bring back a Brampton neighbourhood watch program. She also suggested implementing “innovative ways to include residents” in crime prevention by using technology to develop apps for the public and by better utilizing social media.

Brown said if he’s elected he will help hire 250 officers over four years and 30 new 911 operators.

The promise from both candidates to hire more officers appears to clash with the vision of Chief Duraiappah. Prior to his swearing in as chief, Duraiappah spoke with The Pointer, expressing a desire to shift away from traditional models of policing, which for years has seen police organizations throwing more officers at the increasingly complex criminal elements plaguing modern cities. For years, hiring more officers has not resulted in lower crime rates. Over the course of the last two years of budgets, Duraiappah has actually reduced the number of planned new officers, redirecting funds to other areas of the police budget.

Kaur was quick to call Brown out for failing to take action for four years while he aggressively pushed to freeze budgets, even while alarming criminal activity paralyzed the City.

“…why has it taken us four years to introduce these measures now. What were we doing for four years? Where’s our money being invested or where’s this money being given out? Why are we not addressing these things earlier, why is it taking 500 (stolen) cars, why does it take five deaths on the same sidewalk?”

Throughout the hour-and-a-half debate, Kaur frequently drew attention to the various scandals during the past term of Council under Brown.

“I don’t want to waste money on buddies that have been hired with large salaries by Mr. Brown and this will save us at least $20 to $30 million a year. No more handing out contracts where there’s no real accountability as to where the money has gone or where the work has gone.”

She made reference to the cancelled forensic investigation into the Brampton University project where the City was “duped” out of $629,000. When Brown terminated the investigation in late August, the probe was investigating the mayor’s relationship with consultant Rob Godfrey, one of Brown’s closest friends. Kaur was the former “point person” on the file, working for former CAO David Barrick.

It was one of several investigations into the sourcing of contracts, which Brown cancelled.

“Mr. Brown gave contracts sole sourced,” Kaur said. “There was no check to the best value and the best service. Over $500,000 of your money (taxpayers) was given and we have no university… Just as Mr. Gautam has mentioned, Milton has received a university campus in July 2020, but Brampton still stands (without one).”

(Brampton Board of Trade)

Kaur repeatedly mentioned Brown’s failure to deliver on promises and characterized him as an outsider who spent much of the term trying to get out of Brampton.

She questioned his cancellation of the downtown redevelopment project and his failure to deliver an LRT, which he promised four years ago, much like his claims of building a university and a world class cricket stadium, which he said would be completed by the end of the current term. Brown had the money for it removed from this year’s budget, part of his refusal to expand investments.

Kaur pressed him throughout the debate while promising to make investments to move the city forward.

She forced Brown into a defensive posture for most of the afternoon.

“It’s easy to attack others, what I find speaking to residents in Brampton is we don’t like the negative attack approach that we’ve seen in the U.S., to smear, to mudsling, that’s not who we are in the city,” Brown said, refusing to address the numerous scandals and failures Kaur brought up. “Maybe that’s what hired political attack dogs say you should do, but I find in Canada we’re more optimistic–we’re more positive than that.”