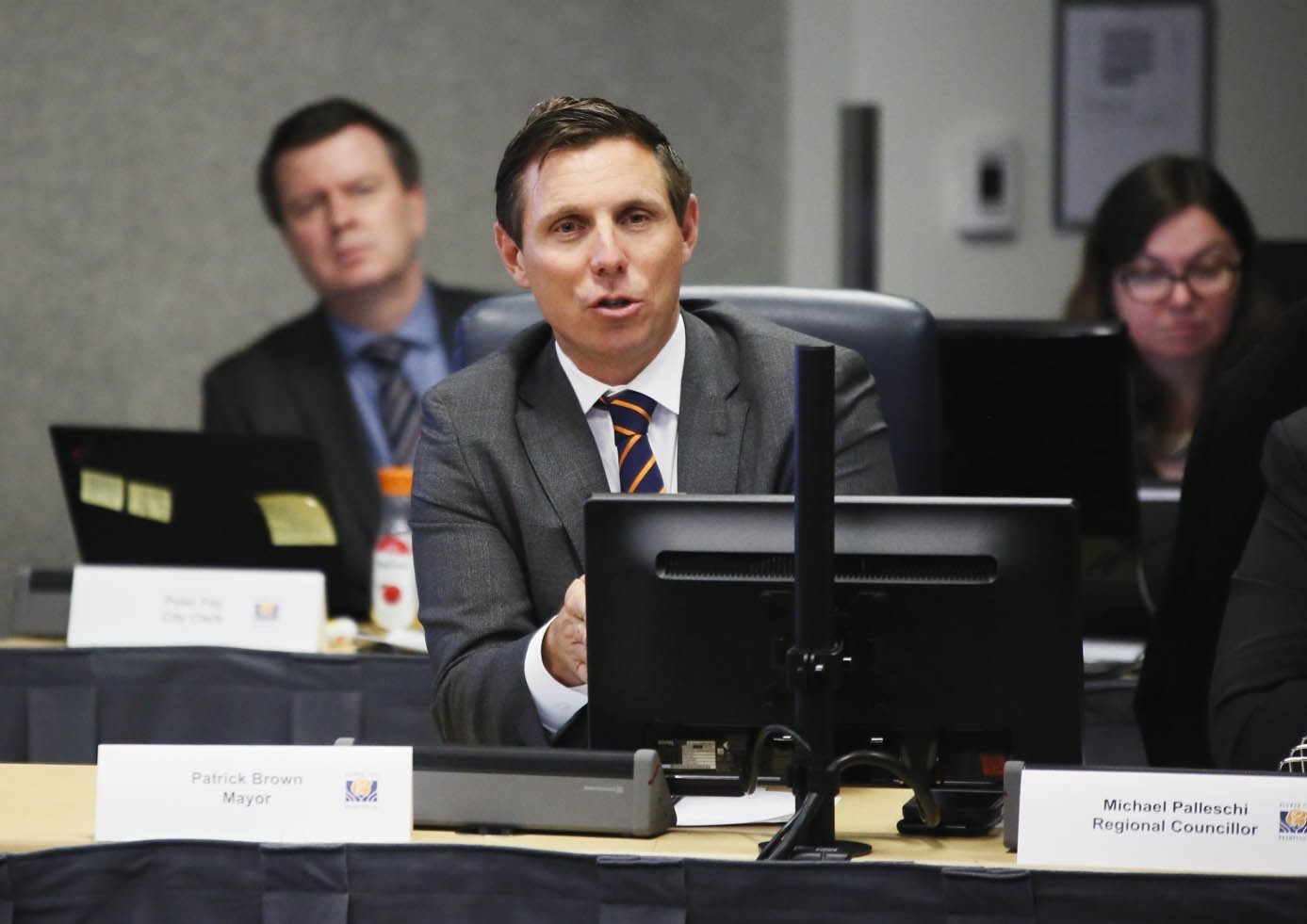 A new report by Froese Forensic Partners shows the auditors were investigating Patrick Brown’s relationship with consultant Rob Godfrey, when the mayor led the snap motion that cancelled the forensic investigation into the mishandling of $629,000 for the failed Brampton University project.

Godfrey is a close friend of Brown.

The investigation update shows Godfrey’s firm was being paid despite not providing proof to the City that work under the contract terms was being done. This falls outside procurement practices that demand public funds only be handed over once vendors execute on deliverables. 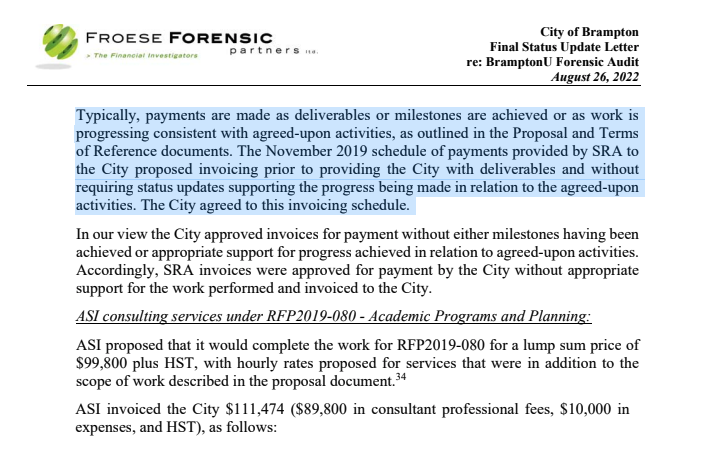 The final report from Froese Forensic Partners states that the City of Brampton was approving payments to Stakeholder Research Associates, without any details about the work being billed for and without proof that the work was even completed.

“The November 2019 schedule of payments provided by SRA (Godfrey’s firm) to the City proposed invoicing prior to providing the City with deliverables and without requiring status updates supporting the progress being made in relation to the agreed-upon activities. The City agreed to this invoicing schedule,” the new report states.

The investigation was in the process of determining why City staff, under Brown’s leadership, agreed to this. But he cancelled the investigation before it could get the answers.

The second update report and its accompanying appendices represent the firm’s final work on the file, from August 17 to 26, the day Brown led a Council motion to end the investigation before key witnesses could be interviewed and before investigators could present their findings to the public.

The last-minute August 26 meeting was called by Brown to cancel a total of six forensic investigations probing allegations of corruption around awarded contracts and hirings under Brown. Council had just received an update from Froese Forensic Partners, hired to probe two contracts for the Brampton University work, saying they found an unfair advantage was given to Godfrey and his firm Stakeholder Research Associates (SRA), and David Wheeler. Godfrey is a close friend of Brown and Wheeler is a close friend of councillor Rowena Santos. Both consultants were given information that helped them win the contracts, information not given to other bidders during the procurement process.

The new report, sent to the office of the CAO as well as the Council steering committee, shows the investigation was zeroing in on Brown’s relationship with Godfrey, whose firm had received almost $360,000 more than what was approved by Council, which only authorized $170,000 for the firm.

The investigation was also obtaining information to determine who was ultimately responsible for approving close to $360,000 without Council’s knowledge. 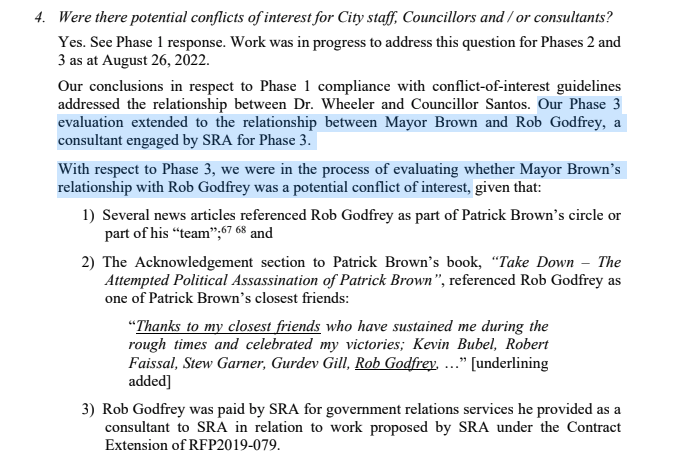 A screengrab of the Froese Forensic Partners update report which notes the investigators were in the process of looking into connections between Mayor Patrick Brown and Rob Godfrey when the mayor ordered the investigation be stopped.

When Brown cancelled the probe investigators were focused on SRA’s contract extensions, which Council was unaware of, for consulting services for a stakeholder engagement for the Brampton University concept.

The investigators found an “unfair advantage provided to SRA and ASI (Godfrey’s firm and Wheeler’s) in the procurement process.”

The new report shows investigators had not been able to interview Godfrey, Wheeler, Santos, and several key City employees.

“With respect to Phase 3 (of the investigation), we were in the process of evaluating whether Mayor Brown’s relationship with Rob Godfrey was a potential conflict of interest, given that:

3) Rob Godfrey was paid by SRA for government relations services he provided as a consultant to SRA in relation to work proposed by SRA under the Contract Extension of RFP2019-079.”

The document also states that payment procedure wasn’t followed on the file, pointing out that typically, payments are made as work is progressing consistent with agreed-upon activities.

“...the City proposed invoicing prior to providing the City with deliverables… In our view the City approved invoices for payment without either milestones having been achieved or appropriate support for progress achieved in relation to agreed-upon activities. Accordingly, SRA invoices were approved for payment by the City without appropriate support for the work performed and invoiced to the City.”

Froese identified one deliverable in RFP2019-079 where there was insufficient information to substantiate whether the City ever received the deliverable as proposed in SRA’s response. In addition, another deliverable was substantially delayed, received by the City over a year and a half late, when the project was in doubt.

The Pointer has examined public documents that show much of what was delivered for the since abandoned Brampton University file did not meet the requirements under the two contracts, and fell glaringly short of what councillors said $630,000 worth of work looks like.

During engagement sessions for the work, Brown, Santos, former CAO David Barrick (who was fired early in the year) and representatives of SRA, including Godfrey, attended a series of meetings.

“While a report was eventually delivered, we are unable to substantiate whether Mr. [Michael] Rudderham [of SRA] performed the contract work, with the time/effort as proposed in SRA’s work plan. There was limited information as to work effort disclosed in available time records for Dr. Wheeler and Ms. [Katharine] Partridge [of SRA] in relation to these activities.”

Froese said supporting records of invoiced time were also missing on the RFP2019-079 file, both on the earlier work and on the contract extension, resulting in the Final Status Update Letter containing limited findings addressing the question: “Was the work contracted by the City performed and were contracted deliverables received by the City?”

This latest report comes two weeks after one member of the steering committee, outgoing Councillor Jeff Bowman, spoke in Queen’s Park urging the province to investigate, after Brown cancelled the six forensic investigations into allegations of sweeping corruption under his leadership. He used 5-4 votes, supported by the same group who have been his allies throughout the term—Santos, Paul Vicente, Michael Palleschi and Harkirat Singh—taking advantage of a councillor’s absence and the vacated seat left after former councillor Charmaine Williams was elected to Queen’s Park in June, to terminate the investigations which had been called by a majority group of six councillors in May. 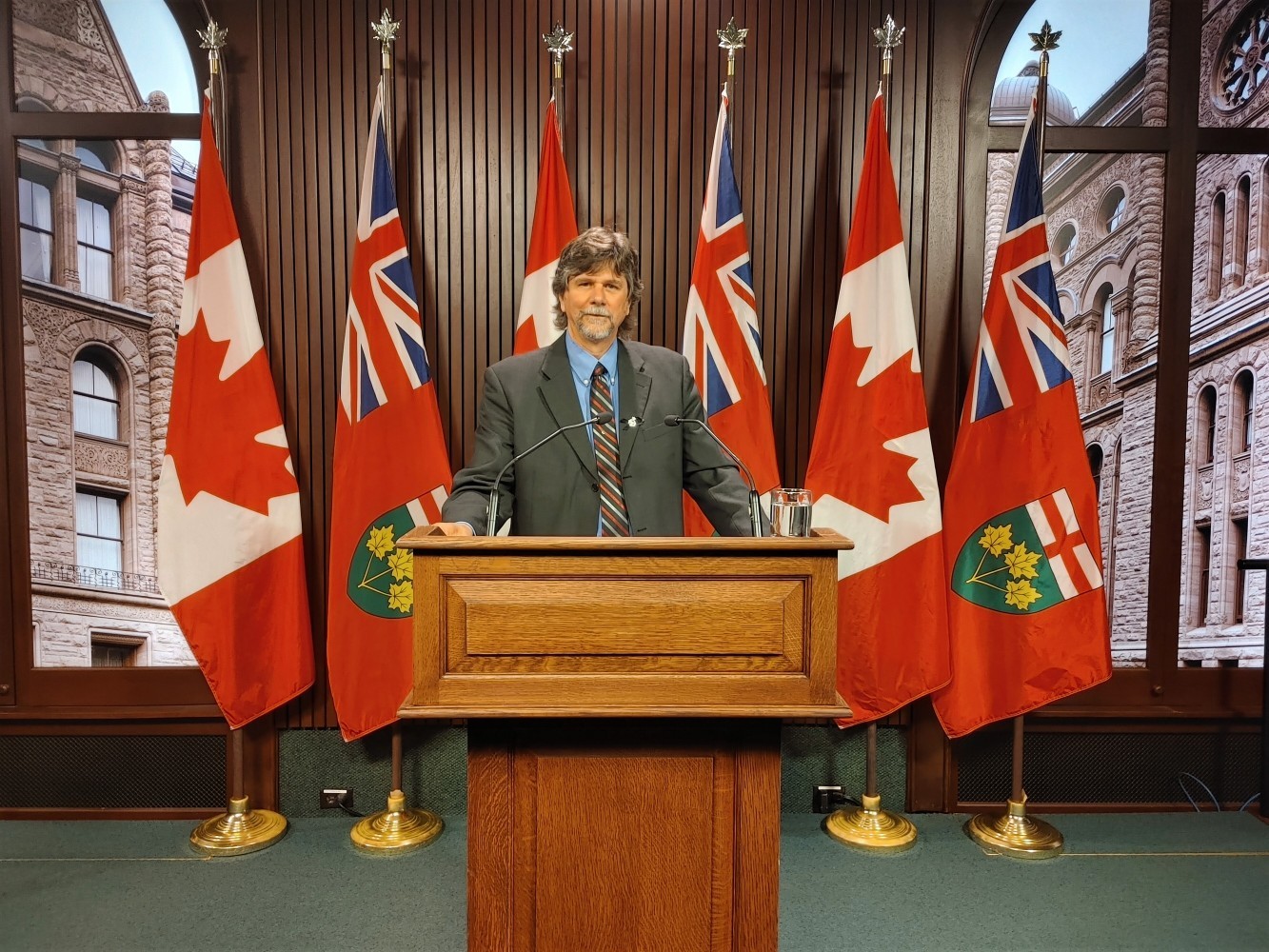 The apparent conflict of Brown and Santos taking votes on investigations into allegations that revolve around their conduct has been raised numerous times, but they continued to vote against the investigations throughout the entire process since May.

“My main concern is the residents of Brampton are oblivious to a lot of this stuff,” Bowman told reporters and provincial officials on September 15 at Queen’s Park.

“That’s why I came here today, because it’s kind of a last resort for me because I can’t get the message out through City Council. So they don’t know what’s going on, they’re going to go to the polls on the 24th, they’re going to vote for someone who may or may not be someone who supports this type of activity that goes on at City Hall.”