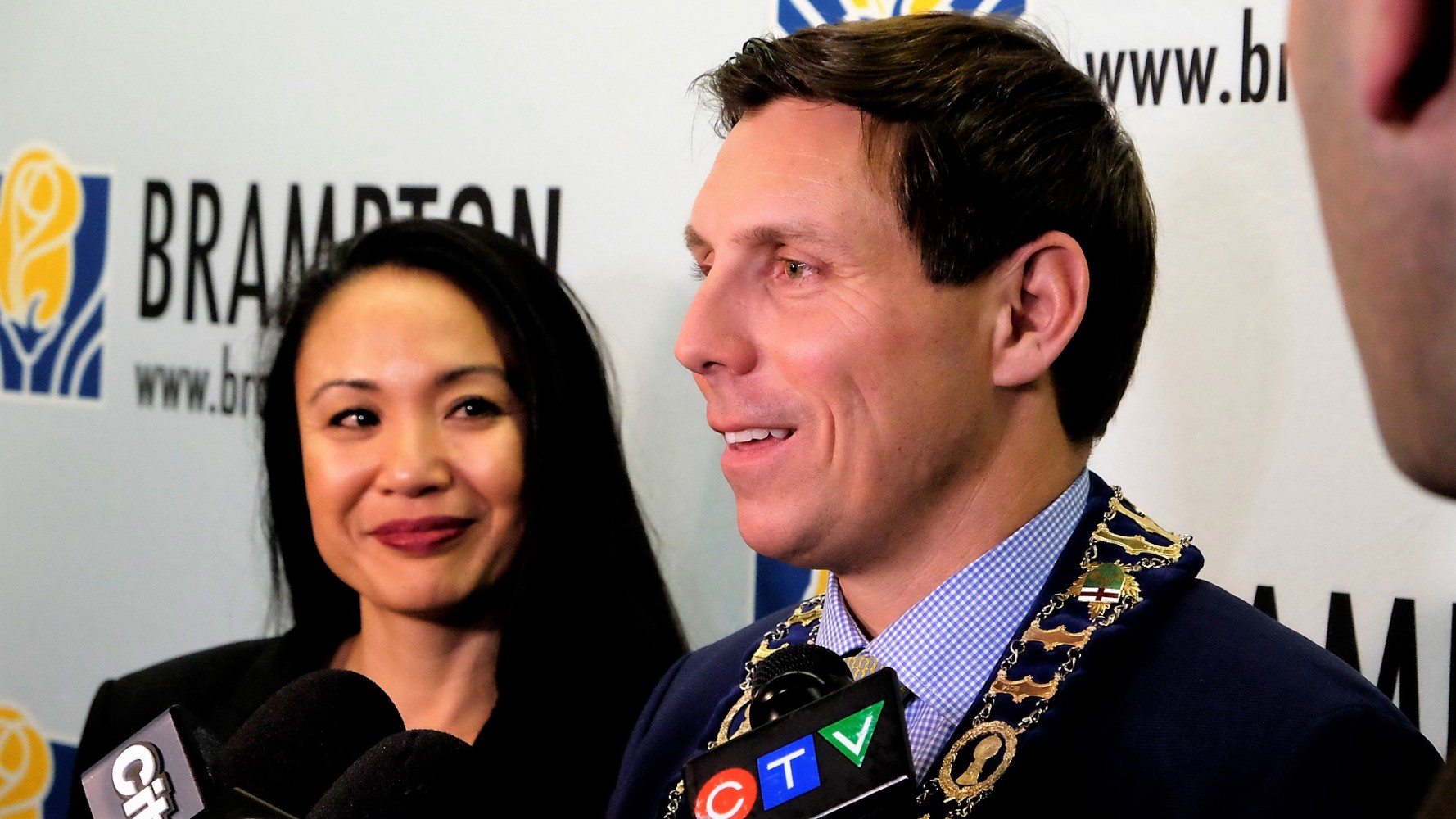 Patrick Brown along with Councillors Rowena Santos, Paul Vicente and Harkirat Singh have called off the majority of Council meetings between now and the October election, following the previous meeting of Council where multiple forensic investigations were cancelled by the mayor.

At the special meeting on August 26, called by Brown with less than 24 hours notice for 3 p.m. on a Friday, he brought forward motions to cancel forensic investigations into the failed Brampton University project, which cost $629,000, and other questionable procurements carried out under Brown’s leadership. He made the alarming move after an update by Froese Forensic Partners Ltd. (hired to carry out the investigations into the Brampton University procurements) revealed widespread wrongdoing in the use of taxpayer dollars for two Brampton University contracts—one given to a firm whose point person is a close friend of Brown, the other awarded to Santos’s close friend and mentor, David Wheeler.

Council was never told of the relationships and City staff revealed earlier this year that much of the work was never completed. Despite this, an additional $360,000 was given to Rob Godfrey’s company; he has been described by Brown as a close friend and political confidante, and is the son of Postmedia Chair Paul Godfrey. 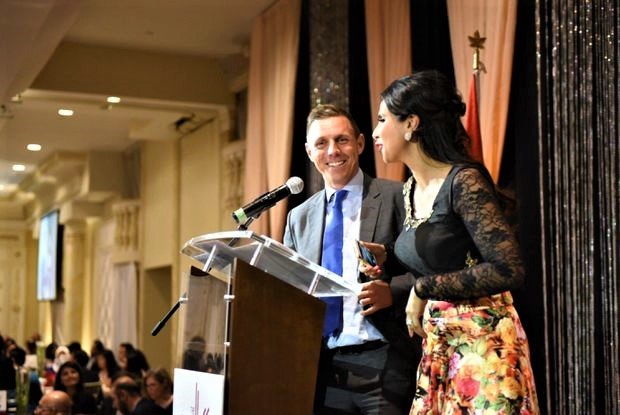 Patrick Brown and Brampton's former integrity commissioner Muneeza Sheikh. A probe into how she was hired, despite ties to the mayor, was one of the investigations Brown recently cancelled.

The 17-page update was provided by Froese Forensic Partners right before Brown cancelled the firm’s ongoing investigations. The document showed widespread wrongdoing in the bidding process for the work and revealed much of what was supposed to be completed for the initial cost of $270,000 was never done.

The investigation firm found council members and staff were in a conflict of interest, Santos had sent an email offering to assist in "cleaning" Wheeler’s presentation to the City’s former CAO, and that the firms awarded the work received unfair advantages in the bidding process because of their relationships and prior knowledge of what the City was looking for, advantages other bidders did not have in what was supposed to be a confidential and fair bidding process.

Froese also found one of the competing bidders had its score altered after the fact so that its pricing proposal would never be opened.

The investigation was moving to its second and third phase, to find out who authorized an additional $360,000 for Godfrey’s firm, after Council only approved $170,000. Other red flags were also to be investigated. But Brown stepped in after seeing the initial update and terminated not just the BramptonU investigations, but forensic investigations by other third-party firms into the awarding of another contract worth an estimated $300,000 to $400,000 that went to another friend of Brown, a man named Brett Bell; contracts for legal work including money given to Patrick Brown’s personal lawyer; how a contract for protective masks went from $82,000 to $896,000; the contract and hiring of the former integrity commissioner who had ties to Brown; and other contracts handed out under his direction.

Councillor Jeff Bowman, who called Brown’s move to terminate the investigations a cover-up, said he had items planned for the September 7 and 14 meetings to address Brown’s cancellation of the investigations without a two-third majority of Council. 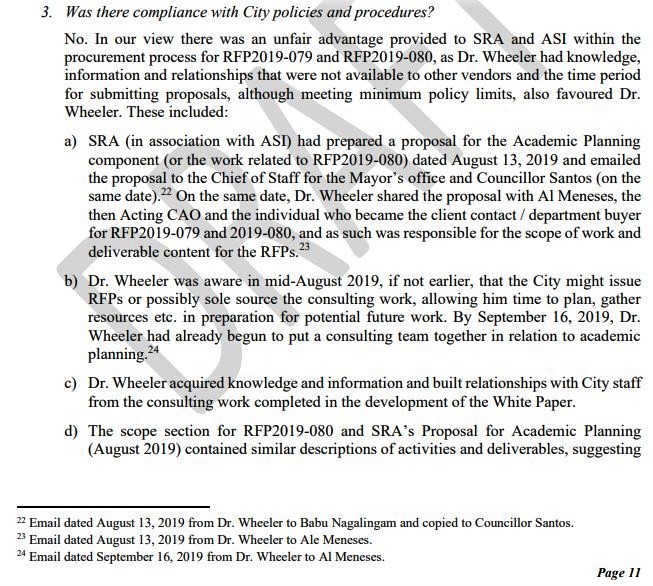 The investigations were set to be completed by the end of September, well before the October 24 municipal election, so voters would have the findings ahead of time. Unless Brown’s cancellation motions are turned around, that likely will not happen now.

Bowman believes the mayor’s motions were not proper.

“If you want to cancel it you have to reopen the discussion on the original motion you had, but also I had a discussion item there on another whistleblower we had regarding the Mayor and regarding hush money paid out by the City,” Bowman said.

The Pointer viewed a copy of the email from the whistleblower which alleges a City department budget was used to pay hush money for Brown, and the matter was supposed to be discussed Wednesday, September 7 to give the mayor a chance to respond publicly, but he instead instructed the City Clerk to cancel the meeting and has not addressed the allegation that he used City funds to make a hush payment.

The cancellation of the forensic investigations was also supposed to be discussed.

In an email sent to members of Council by City Clerk Peter Fay, he explained that the September 14 meeting was cancelled at Brown’s request, while the request to cancel the September 7 Committee of Council meeting was from Brown, along with Singh, Santos and Vicente, who chair three of the five major committees.

Fay said that while there was no specific rule for cancelling the meeting on September 7 that was already scheduled, he chose to make the call after the cancellation was requested by Brown and his three allies.

“While there is no specific rule, precedent or protocol for cancelling a regular meeting with multiple chairs, the practical approach would be to receive approval from a majority of the Chairs before doing so,” Fay wrote. “I have received approval for cancelling the meeting from 3 of the 5 chairs (Councillors Singh, Santos and Vicente).”

It’s unclear why Fay didn’t allow the meeting to proceed, since there is no rule that allows the cancellation of a meeting with multiple chairs. 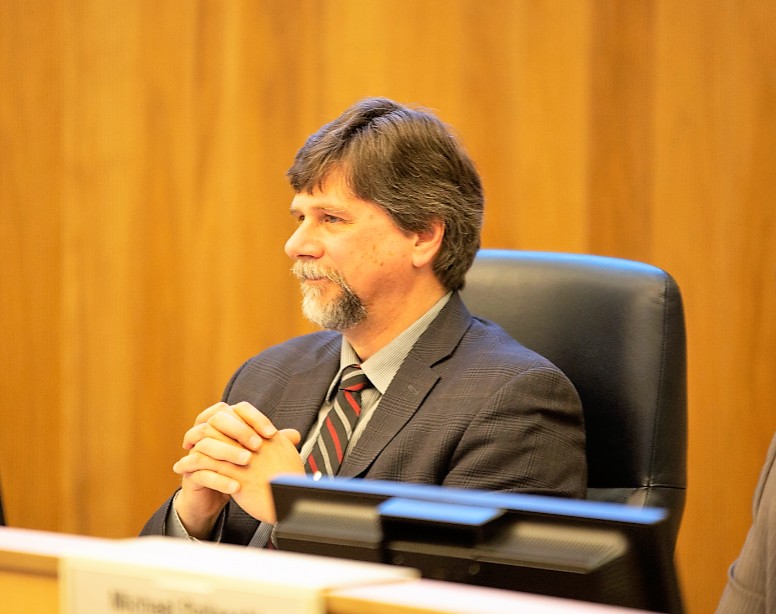 Councillor Jeff Bowman is trying to get investigation findings out to the public, despite the efforts of Patrick Brown to keep them secret.

Moving forward, Bowman said Brown could continue to stonewall any effort to investigate what happened with millions of dollars worth of contracts under the mayor’s direction.

Bowman said any resident of the city can write to the Ontario Ombudsman and request a formal investigation.

If a complaint is filed to the Ontario Ombudsman relating to an alleged abuse of taxpayer money, the Ombud has the authority to investigate but only after a complaint has been filed by a member of the public including a council member. The Ombud will not generally launch a municipal investigation until all other internal options have been exhausted.

Paul Dubé, the province’s Ombudsman, wrote to the City of Brampton earlier in the year, after receiving complaints regarding contracts under Brown’s leadership, but he advised Council to hire its own investigators. Now that Brown has killed that process, Bowman said the Ontario watchdog should step in, especially since the early evidence from the now cancelled third-party investigation reveals widespread wrongdoing, and that is only from one of the investigations. The others, had they been finished, might have revealed even worse conduct, he said.

“I don’t know whether there could be any type of police investigation at this point,” Bowman said. “I guess one of the best options would be to write to the Minister of Municipal Affairs Steven Clark, and ask him, ‘Are you willing to finish these investigations on behalf of the residents of Brampton?’ Those are some of the options I guess could be undertaken by the public.”

The ministry generally does not investigate such matters and has in the past pointed to provincial legislation that empowers municipalities to govern themselves. Since the Ontario Ombudsman was given expanded powers that brought municipalities under its jurisdiction at the start of 2016, the provincial government has relied on the office to handle complaints at the local level of government.

It’s unclear if members of council will seek a judicial review or injunction to halt Brown’s cancellation of the investigations until the courts determine whether the mayor’s motion was legal or not. The Pointer has asked if such legal action will be pursued.

Brown attempted to cancel it on August 26 but failed.

Brown’s motion to cancel the September 12 meeting only had five votes in favour: himself, Santos, Vicente, Singh and Michael Palleschi.

“Unless I have a clear six members of Council who wish to have the meeting cancelled, I will be obliged to proceed to schedule these meetings because the minority of Council cannot be used to undermine something when the majority of Council has spoken on something,” Fay said, rejecting Brown’s attempt to cancel the meeting.

It’s Bowman’s hope that on September 12 further information on the investigations can come forward, and he intends to ensure that happens, unless Brown and his allies refuse to show up, which would force another cancellation.

“We’re six weeks from an election and everybody running has got to be aware the public is watching everything they’re doing now. If stories are coming out about cancelled investigations; there has been no public input because nobody has been allowed to delegate on what the Mayor and his councillors have done—that’s not going to look good as we get closer to the election. So I would hope they show up for the 12th and discuss the items on the agenda.”