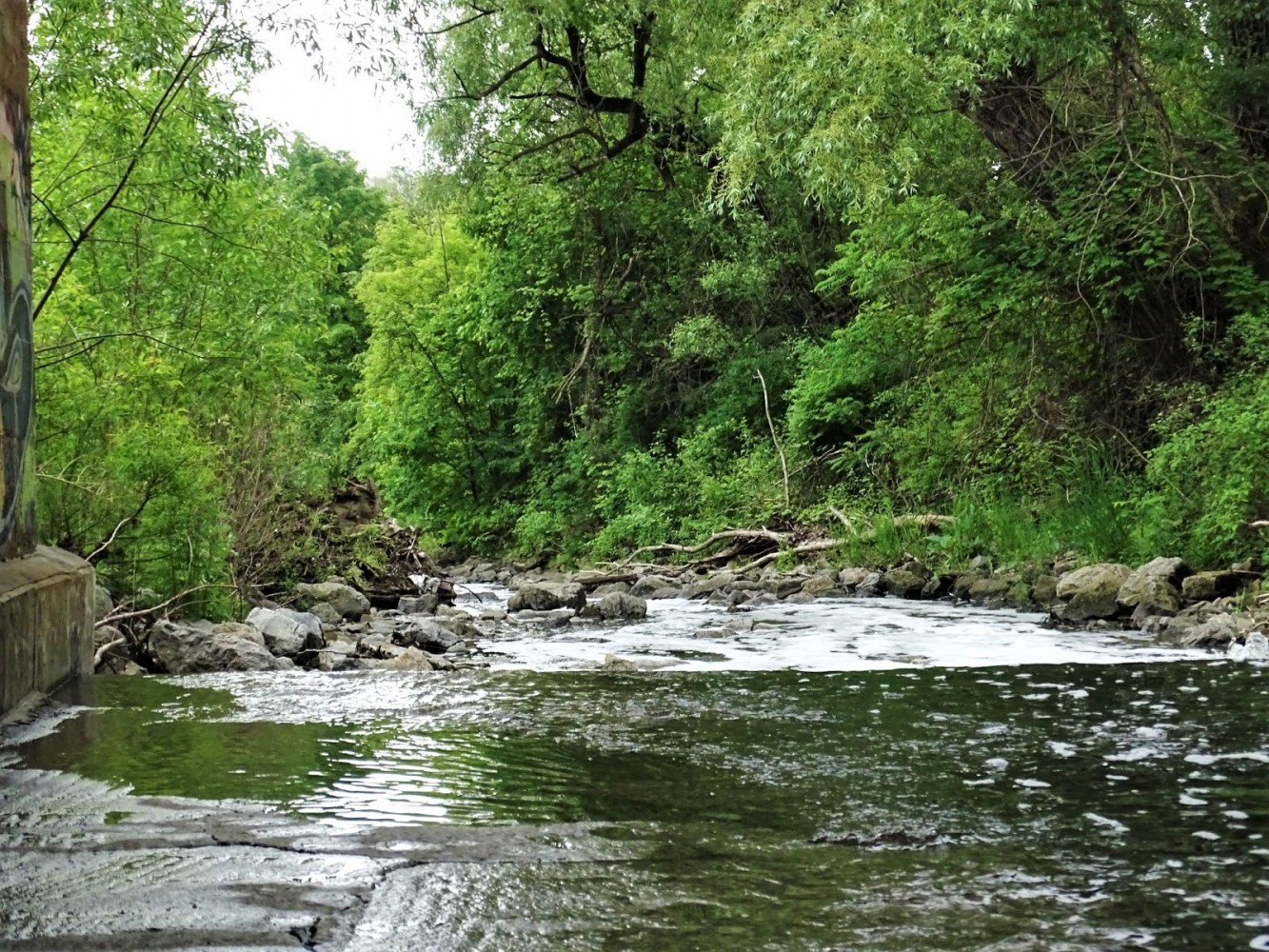 Dundas Street is the oldest road in Mississauga—its design predated any understanding of climate change.

Etobicoke Creek runs south from the headwaters of the Greenbelt and eventually snakes along portions of the Dundas corridor. Due to the narrow topography surrounding the large tributary, downstream flooding during major storm events, as run-off is sent into the creek, is common in the area.

This has caused significant damage to buildings, homes and the roadway.

In 2013 a massive storm event left many pockets across Southern Ontario devastated; Mississauga neighbourhoods along Dundas were among the hardest hit. 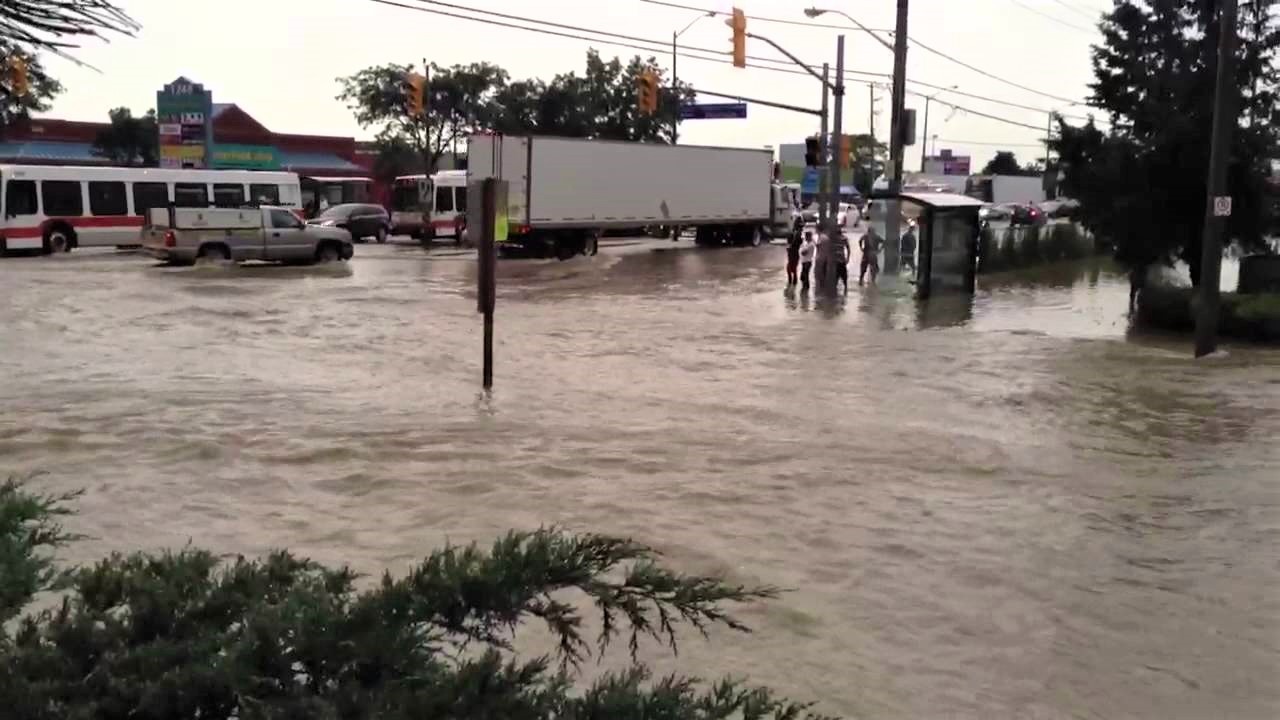 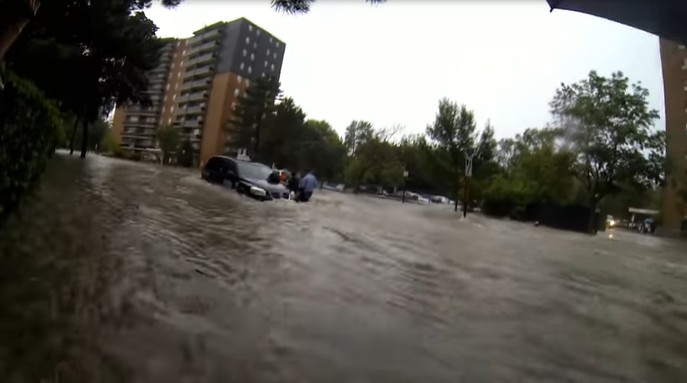 Images from the 2013 flood that hit Mississauga.

The damage cost Ontario $932 million and left many basements flooded. Mississauga has since poured money into its stormwater management system in an attempt to adapt to climate change.

Etobicoke Creek is one of the major watersheds in the city, leaving nearby neighbourhoods prone to flooding after storms. In June 2021 Council approved a $520,000 expansion for an environmental assessment of Etobicoke Creek aimed at finding solutions to accommodate future development and transit projects along Dundas Street, which has been designated as a major transportation spine crucial to Mississauga’s long-term planning.

With its multiple lanes and proximity to businesses, Dundas Street has been designated for a bus rapid transit (BRT) system that will connect to the Hurontario LRT. This hub and the surrounding area has been identified as one of Mississauga’s high-density urban growth zones.

In order to create a BRT and develop the dense commercial and residential mix planned for the corridor Mississauda developed the Dundas Connects Master Plan.

Much of the municipality’s expected population growth is designated for Major Transit Station Areas (MTSAs), making planning along Dundas crucial to future policies such as inclusionary zoning (IZ) which would increase the amount of affordable housing in Mississauga.

The BRT is part of a much broader vision to extend and connect regional transit across five municipalities (from Highway 6 in Hamilton to the recently redeveloped Kipling Transit Hub in Toronto’s west end) along approximately 48 kilometres, allowing residents to commute across the sprawling cities without the delays that come with a non-integrated transit approach.

In March 2022, 7 of the 17 kilometres of the Dundas transit plan, dubbed the Mississauga East segment, was funded by all three levels of government. Provincial taxpayers will contribute $101.8 million, federal taxes will cover $122.2 million and local taxes will fund the remaining $81.5 million for the corridor.

Mississauga’s goal to create a roadway that prioritizes public transit and low-carbon emission travel, could be jeopardized due to one portion of Dundas Street prone to flooding.

“The Special Policy Area (SPA) approval process is one component of the overall planning and development process,” Luisa Galli, manager of planning programs for the City explained in an email. “Its completion will impact only the lands that are located within the defined SPA. Recommendations for other areas within the Dundas Connects Master Plan which are not affected by the Special Policy Area will continue to advance.”

SPAs are designated by the Province, and cover areas that require special planning considerations due to constraints such as flooding risks. Normal development applications and approval processes do not apply to SPAs as unique solutions have to be implemented before development can occur, to prevent future problems. In floodplains, SPAs are often designated, forcing unique mitigation practices that require municipalities and builders to take special measures that ensure public safety and protection of property in the event of a flood.

Three key portions of Dundas Street are affected by flooding, and have SPA designations placed on them to limit development because of the risk of flooding.

To understand the feasibility of flood mitigation in the specific areas, staff hired Matrix Solutions Inc.

The Etobicoke Creek SPA covers a large portion of the eastern area of Dundas Street. 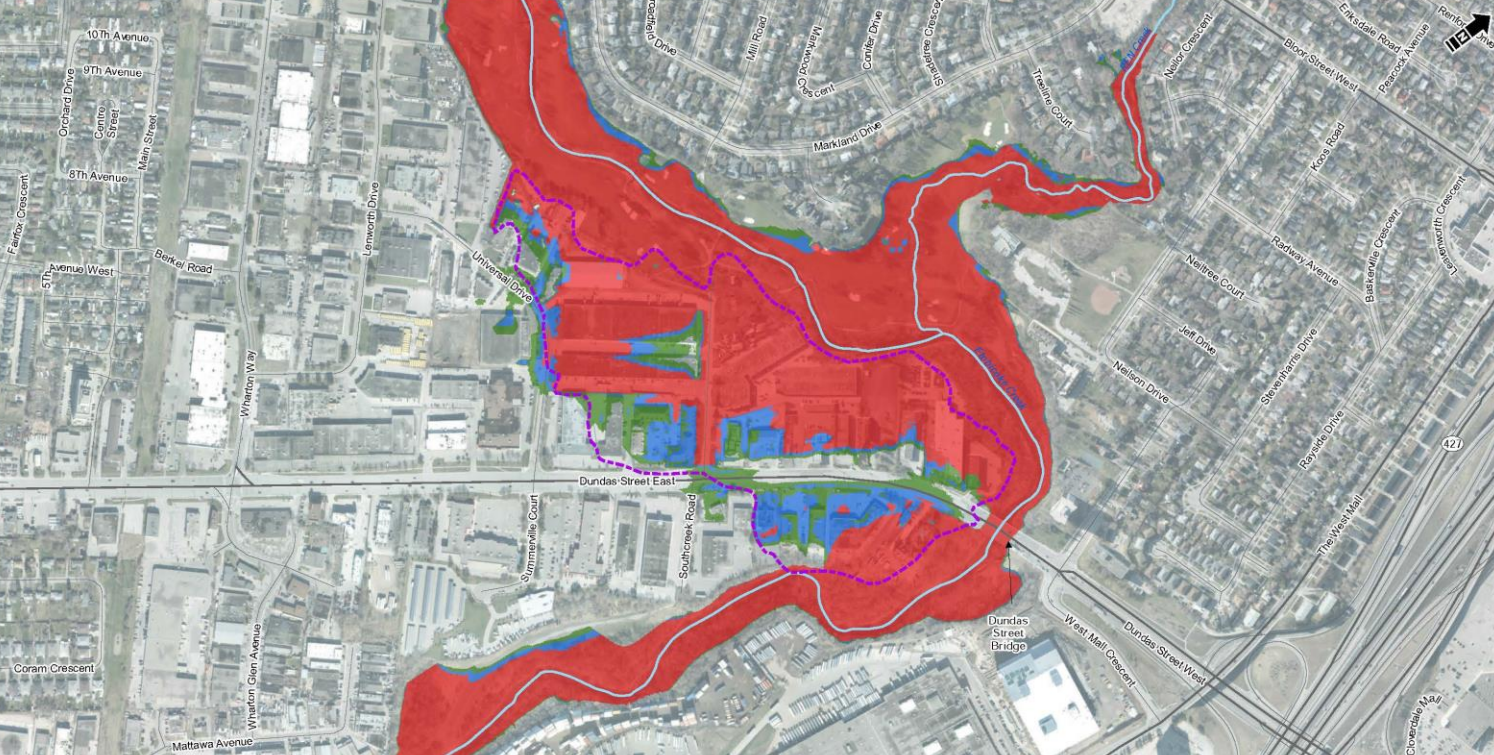 This portion of Dundas Street East is in a high-risk flooding zone, meaning no new development is allowed.

Matrix reviewed a previous study by AECOM (done in 2019) called a “pre-EA” which determined the cause of the flooding and options to mitigate risks.

According to AECOM the main cause of flooding is due to the current waterway being too small to handle the increased volume of water from a significant storm event. Four options were presented: flood proofing at key problem locations; dykes; bridge/culvert improvements; or do nothing.

“The flood mitigation options were determined by AECOM (2019) to be infeasible; multiple flooding ingress points make floodproofing difficult, tightly spaced buildings adjacent to the creek and natural heritage make dyke construction infeasible and replacing the current bridge would not suffice to mitigate flooding,” according to the study. “Therefore, it was concluded that the preferred approach for the Etobicoke SPA was the do nothing option.”

Matrix’s job was to peer-review the study for the City of Mississauga. It found multiple challenges: the bridge crossing Dundas Street East into Toronto is not part of the flooding issue, so replacing it would not have any impact; multiple lines of water and wastewater infrastructure cross the creek and six stormwater pipes discharge into the waterway; if Mississauga were to widen the creek channel, road relocations would be needed (Matrix concluded this could be prohibitively expensive).

When considering solutions, all studies used what is called the “100-year storm” scenario, events that are now occurring every few years.

The Toronto Region Conservation Authority, which covers the eastern part of the Dundas Street corridor in Mississauga, explains the term as an, “attempt to simplify the definition of a rainfall event that statistically has a 1-percent chance of occurring in any given year, at any given place.” However, with the planet continuing to warm rapidly, many climate experts are becoming wary of using this measurement as such severe storms become increasingly common due to the rise in global temperature.

Three separate options were explored by Matrix. The first approach looked at widening and lowering Etobicoke Creek, the second solution offered the same approach but 900 metres downstream of Dundas Street to relieve one pinch point where flooding is common. The third option is the “do nothing approach” which would only allow future development in low and medium-risk areas. 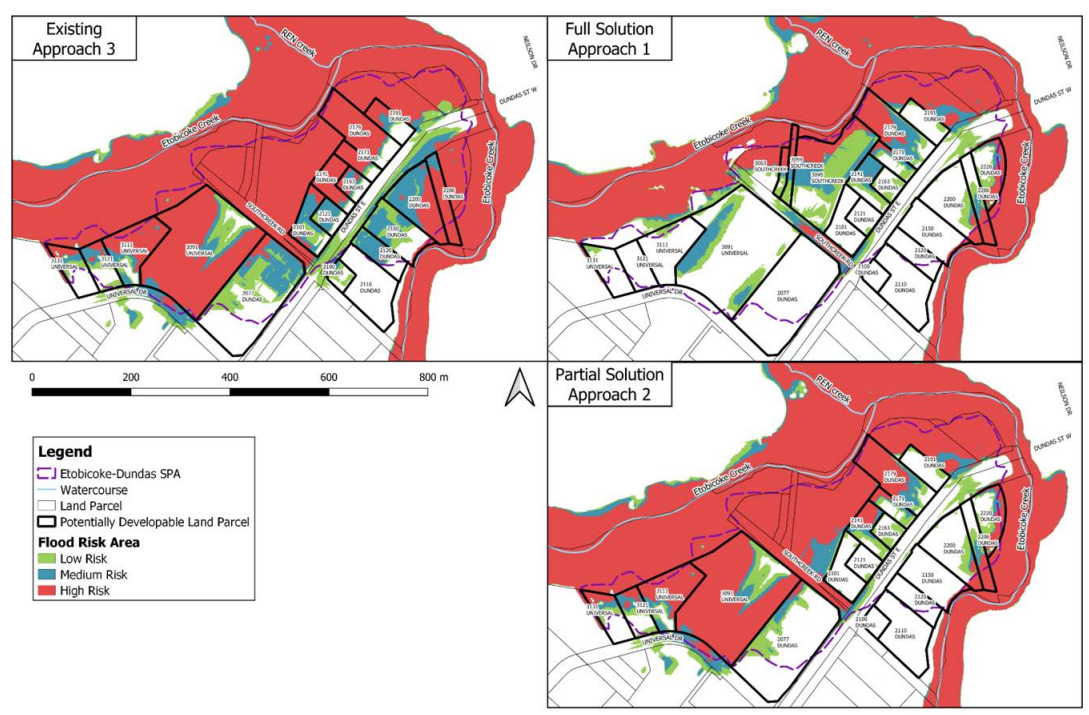 Staff determined through the peer-review and considering the feasible options and costs, the last approach should be taken.

“This option does not require any physical creek modifications or construction work. Proper floodproofing requirements for buildings and limiting sensitive land uses within the SPAs will allow for development along Dundas Street,” the recent staff report explains. “This option still involves Provincial approval as it is a change to the current SPA policies, however the financial impacts would be low in comparison with the other two options.”

Matrix determined the second approach would be the best solution, offering both mitigation and lowering the risk in the area with what it calls an “acceptable cost/benefit solution.”

Instead, Mississauga will be relying on developers to implement necessary flood protection measures within a known floodplain. Without the Province signing off to remove the SPA it is unclear if this portion of Dundas Street will allow for the mixed-use vision Mississauga wants and needs, but can’t achieve unless the flooding issue is properly resolved.

“Flooding issues that limit development for some areas would not be sufficient reason to consider more densities along portions of Dundas Street beyond what is already proposed,” Galli said. “Both the Dundas Connects Master Plan and proposed policy framework acknowledges that not all areas along the Corridor will be able to support the same level of development.”

The Dixie-Dundas SPA and Applewood SPA have completed environmental assessments (EA) to identify if flood mitigation in these areas is possible. 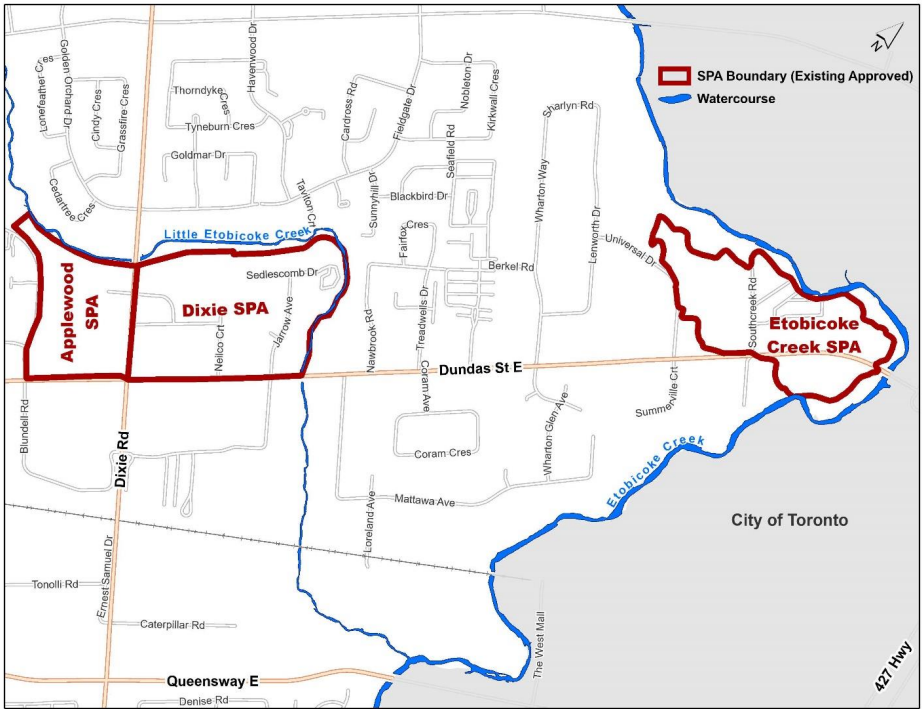 The EA determined this portion of Dundas where it intersects with Dixie Road floods due to columns beneath the bridge that don’t allow enough water to pass during overflow from a significant storm event. The replacement and expansion of this bridge would mitigate flood impacts and allow for the SPAs to be removed. Staff are narrowing down design and construction options for this project.

“[O]nce the infrastructure improvements are constructed, and the lands currently subject to flooding are opened up for development, the Dixie-Dundas and Applewood SPAs could be removed from the Mississauga Official Plan (MOP),” according to a June 20 Planning and Development Committee staff report.

Galli told The Pointer in an email the projects will primarily be funded through the stormwater charge and development charges, which she says is “typical for any stormwater project in the City.”

The removal of the designation would allow for these areas to increase density and developers to create mixed-use walkable communities. With the BRT being planned along Dundas Street, the Region of Peel has designated parts of the corridor near transit hubs as a MTSA. This designation is important for the planning of desired 15-minute neighbourhoods, as grants for transit funding and other pieces of infrastructure required to create dense urban communities are now being prioritized for MTSAs.

It remains unclear, if Council decides to approve the do nothing recommendation for the eastern portion of the Dundas corridor, how the broader vision of Mississauga’s master plan for the future will be achieved.