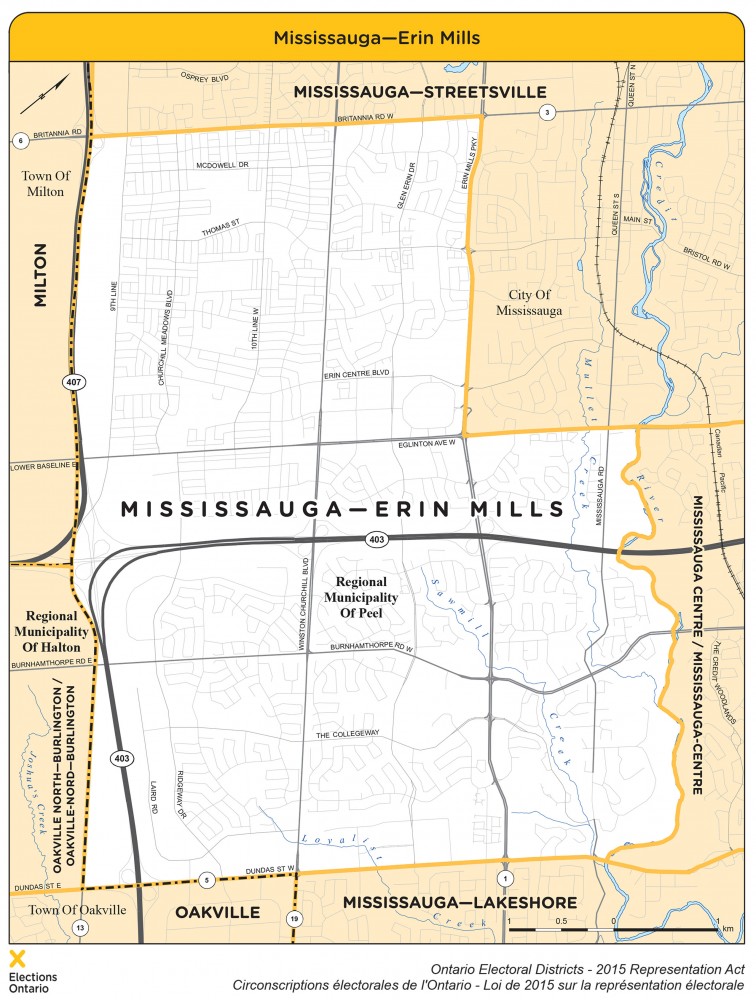 Behind the white picket fences and manicured lawns, the housing picture in Mississauga—Erin Mills doesn’t look so rosy for many residents.

Prospective renters, in particular, have been struggling to keep a roof over their heads as prices explode across Mississauga.

Located on the western portion of the City between the ridings of Mississauga—Lakeshore and Mississauga—Streetsville, the electoral district is one of the city’s largest, with 122,560 residents in 2016.

The residents are young, an average of 38.4 years (more than a year younger than Mississauga’s overall average age) and 57 percent of the area’s residents identify as a first-generation immigrant. There are a large number who work blue-collar jobs in sectors such as manufacturing and transportation/logistics, while other common employment categories include business management, information technology and sales.

Mississauga—Erin Mills also hosts the University of Toronto Mississauga (UTM) giving the riding a unique personality with thousands of younger residents who either commute to the area, live on campus or nearby.

With the student population, large numbers of newcomers and a younger than average demographic, more townhouses and apartment/condo buildings have been built in the riding, as Mississauga attempts to confront the prolonged affordable housing crisis seen across much of Peel.

Statistics Canada also shows that the majority of households have an average of 6.6 bedrooms per dwelling, meaning many multi-generational families, students or other tenants living under one roof.

Illegal secondary units has been a problem that has plagued the area for years, as the housing supply simply cannot meet the needs of the growing population.

Between 2006 and 2016 only 7,420 new residential units were constructed despite the population increasing by 5,361 between 2011 and 2016 alone. Recent reports from the Region of Peel indicate housing is desperately needed with the subsidized housing wait-list growing dramatically during the pandemic.

On the corner of Erin Mills Parkway and Eglinton Avenue West, beautiful eye-catching condos and apartment buildings rise into the sky, offering desirable places to live next to the Erin Mills Town Centre. 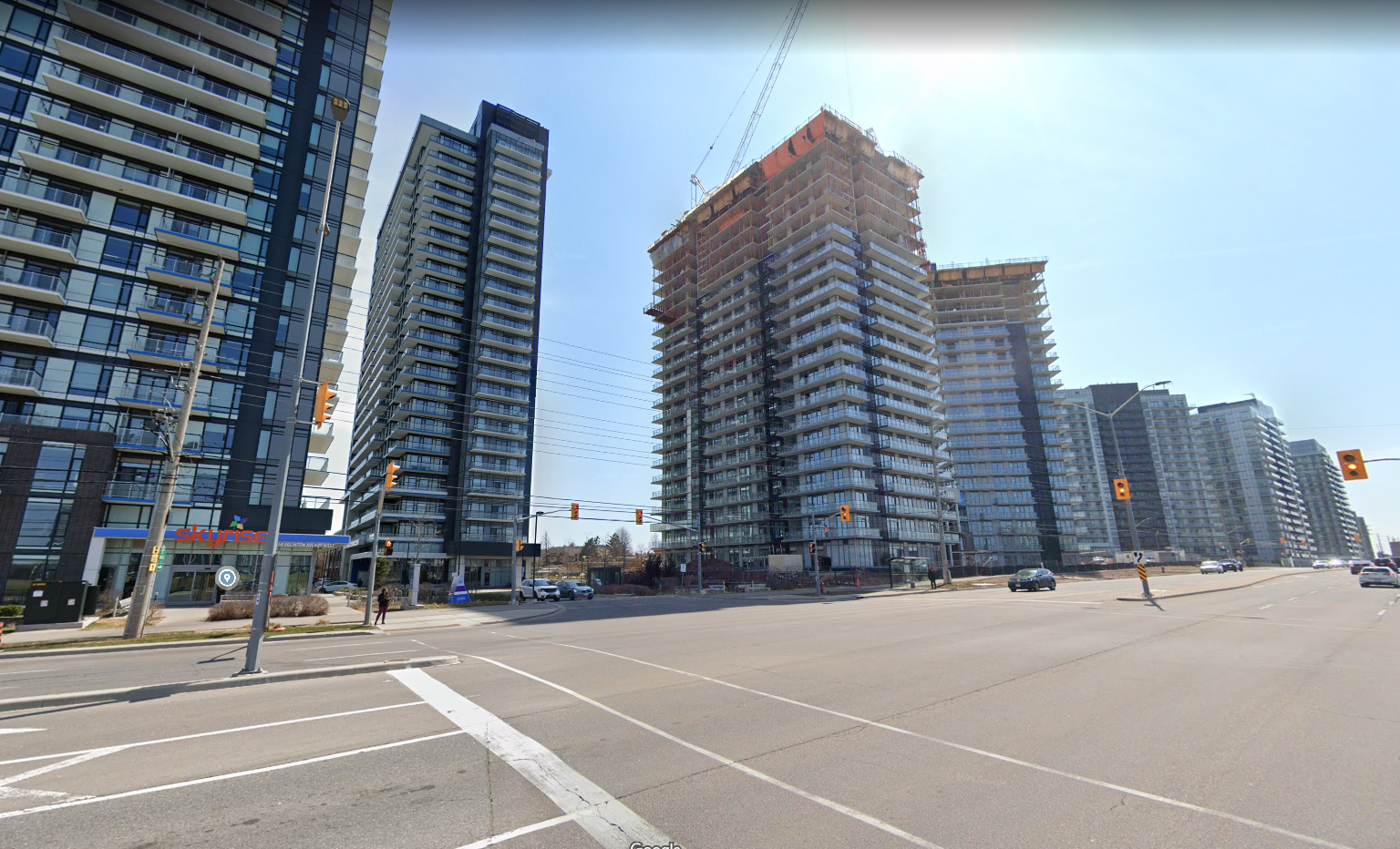 Along Eglinton Avenue West rows of highrise apartments buildings are being constructed to provide a variety of housing to the area.

The commuter hub is designated in the Region’s official plan until 2051 as a primary major transit station area (MTSA) and will eventually feature more housing and transit connectivity that allows residents to ditch the car while traveling entirely by bus or train instead, while active transportation infrastructure will hopefully get more residents walking and cycling locally. The MTSA label will soon allow the City of Mississauga to enact inclusionary zoning bylaws (once the official plan is approved) requiring new buildings in the area to have a certain percentage of units that meet criteria for affordable housing.

Many who still live in a lowrise home routinely have to deal with the effects of climate change.

Mississauga has made efforts to create a better stormwater management system. But as greenhouse gas emissions (GHG) warm the planet, extreme storms batter the communities, ending in expensive insurance payouts and clean up jobs, as the infrastructure has not yet caught up with the realities of climate change.

With the paved runways for water and flood lines through many of the communities in Mississauga—Erin Mills, more and more residents have to deal with flooding often.

Climate change and its impact on invasive species, like the LDD moth, a small caterpillar that wreaked havoc across Mississauga but particularly Erin Mills, Lorn Park and Applewood Heights, is also a concern for many local residents. The tiny insects ate through a large portion of the surrounding urban canopy, sometimes killing older fragile trees in some of the most mature neighbourhoods.

Mississauga—Erin Mills is home to a portion of the Credit River, where large mature trees protect those under the sun who walk and hike the expanse of local trails.

Residents of Mississauga—Erin Mills have voiced the desire for an MPP who will champion affordable housing, while also improving environmental policy and preserving nature.

Created in 2015 and first contested in 2018, Mississauga—Erin Mills was formed from a large portion of the old Mississauga West riding, until 2007 when the map was redrawn and redistributed part of the area as Mississauga-Erindale.

Four years ago, Sheref Sabawy of the PCs won the seat, with 41.61 percent of the vote.

He beat Farina Hassan of the NDP who came second with 27.6 percent of the vote.

Sabawy has spent his term advocating for new immigrants and seniors and is now seeking reelection. He has endorsed his Party’s political plans like the construction of Highway 413 and getting rid of the carbon tax. 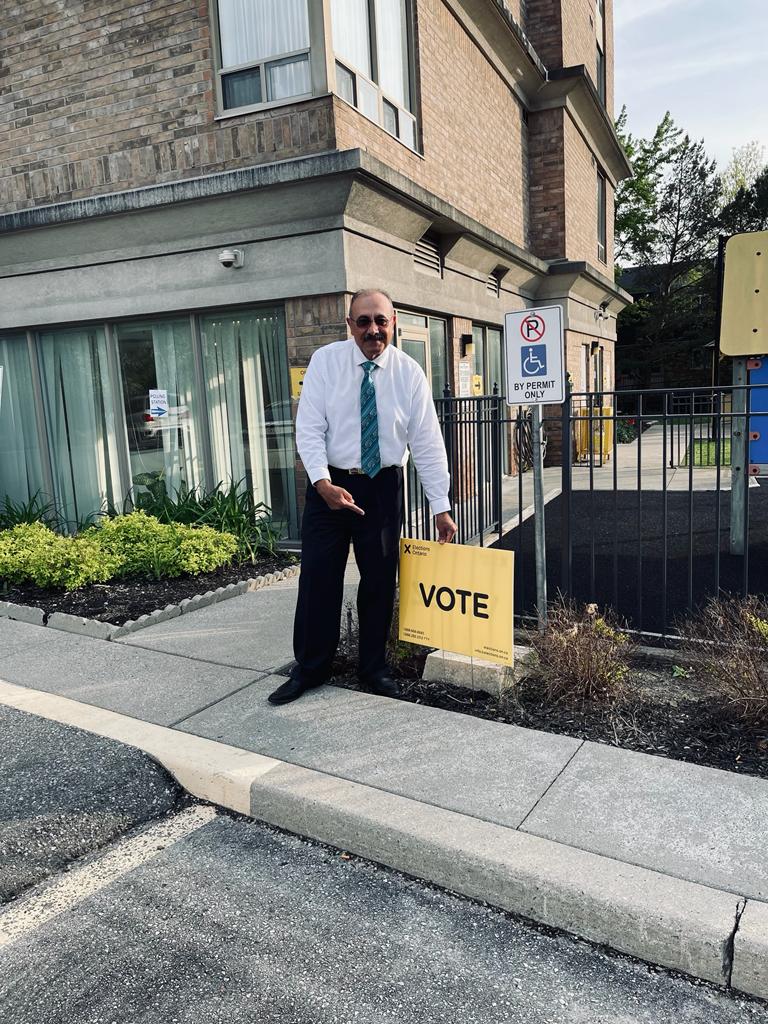 Sheref Sabawy advocated for first-generation immigrants in particular over his term.

“Four years ago Doug Ford and the Ontario PCs were elected with a strong mandate to build a better province for the people,” he said in a video on Twitter. “We put shovels in the ground to build highways and transit projects, we expanded hospitals and created thousands of long-term care beds…Doug Ford and I can continue this important work. The Ontario PCs are the only ones who will get it done.”

Prior to entering politics he was an instructor at Centennial College teaching network infrastructure, design and implementation. At George Brown College he taught networking, security and technology for over a decade. Sabawy had unsuccessfully tried to enter federal politics before becoming an MPP.

Hassan is once again running for the NDP. She has a background in banking and finance with more than 15 years experience. She served as a finance manager for the annual Carassauga event and has worked as a credit specialist at RBC.

According to her website, she has organized food drives, park cleanups and worked with the United Way Peel to alleviate poverty and homelesness.

“I love my community. People here need to have access to services that keep us healthy and competitive,” her website reads. “We can provide that by repairing the damage done to our healthcare system after years of Liberal and Conservative cuts. An NDP government will invest in education and health care to include pharmacare, dental care and mental health care. This will help make life more affordable for families, while we work to create good local jobs.” 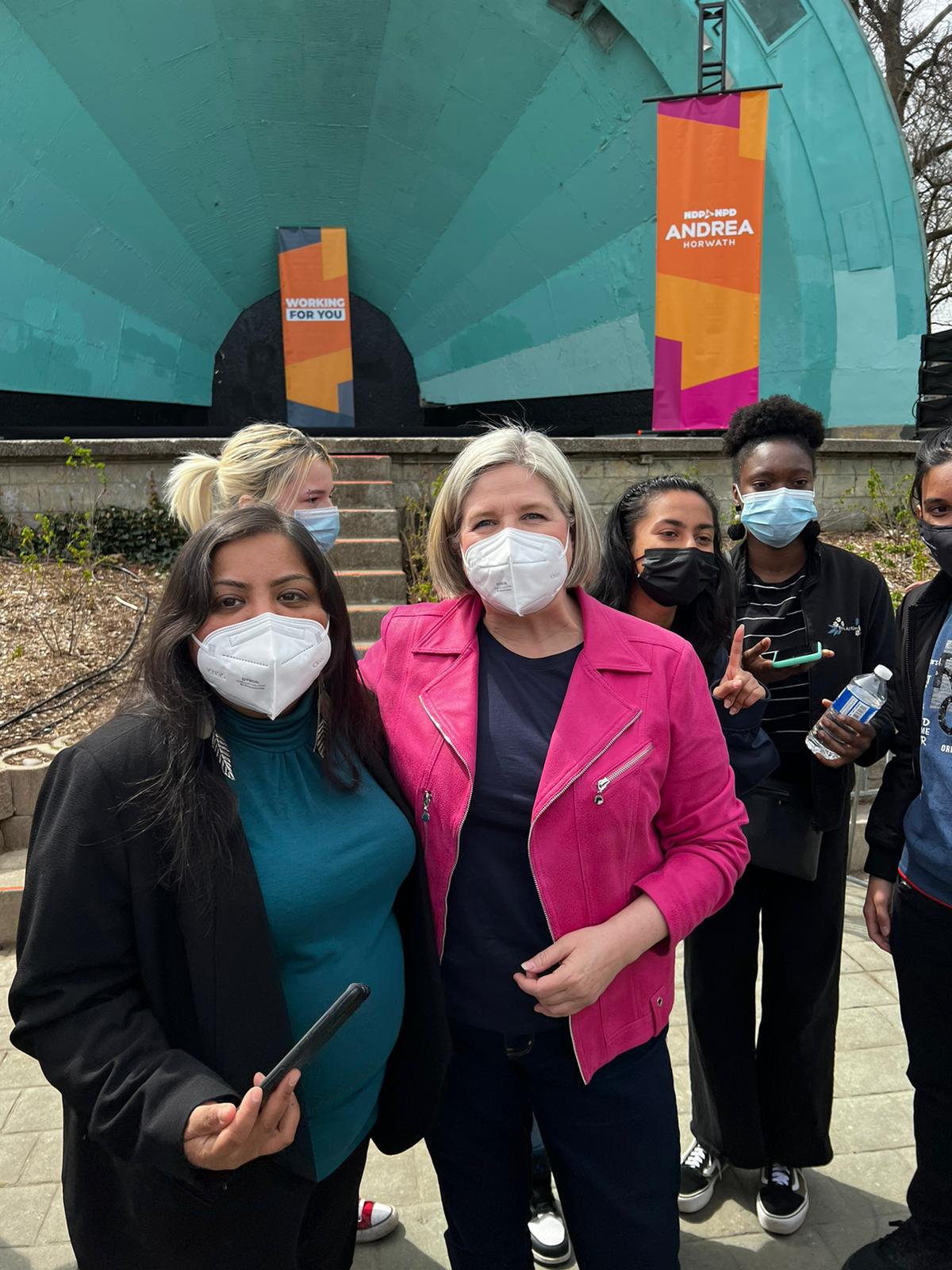 Hassan says she plans to advocate for affordable housing, women’s rights, ending racism/discrimination and gender inequality. She holds two bachelor’s degrees from York University, one in economics/business management, the other in human rights and equity, and a general management certificate.

Michelle Angkasa hopes they can support the younger generation living in the riding of Mississauga—Erin Mills. As a student at the University of Waterloo completing a bachelor’s of Environmental Studies, the Green candidate wants to advocate for the preservation of nature.

“Michelle believes Ontario needs stronger, more collaborative voices in government who will advocate for intersectional and equitable change,” their website reads. “They firmly believe an economically, socially, and environmentally sustainable future for the province is possible, and that this election is the critical moment to push for the bold action we need.” 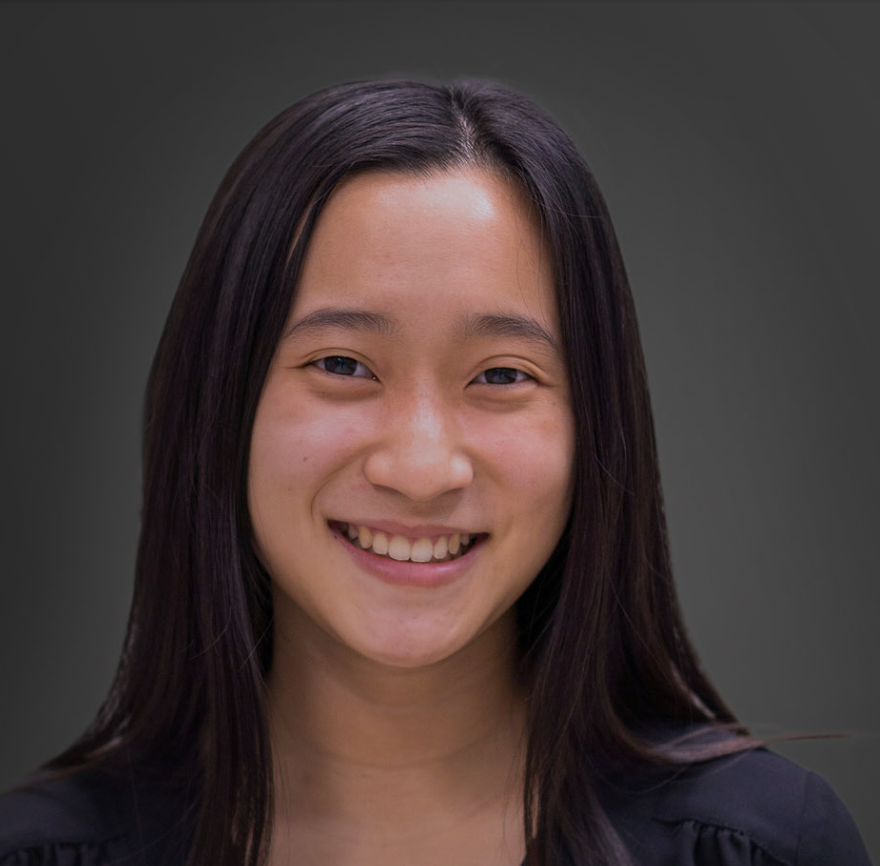 As a student, Michelle Angkasa is a part of the younger generation and is hoping to make an impact with new ideas whose time has arrived.

Angkasa is a first-generation Chinese-Indonesian-Canadian raised in Mississauga and is hoping their passion for youth-led advocacy and climate justice will serve constituents well, if elected.

Currently, they are a student engagement intern at Good & Well Inc. an investment firm and previously was a University of Waterloo Environment Ambassador, Peer Mentor and Campus Housing Residence Life Don. In 2021 they were a policy intern with the Ministry of Children, Community and Social Services.

“From their years of organizing with youth-led groups like Our Time and Future Majority, Michelle knows that housing affordability, mental healthcare access, and the climate crisis are the pressing issues for youth across Ontario – but progress towards real, lasting solutions has been slow and insufficient,” their website reads.

Imran Mian of the Liberals is hoping to take the seat back for his Party. 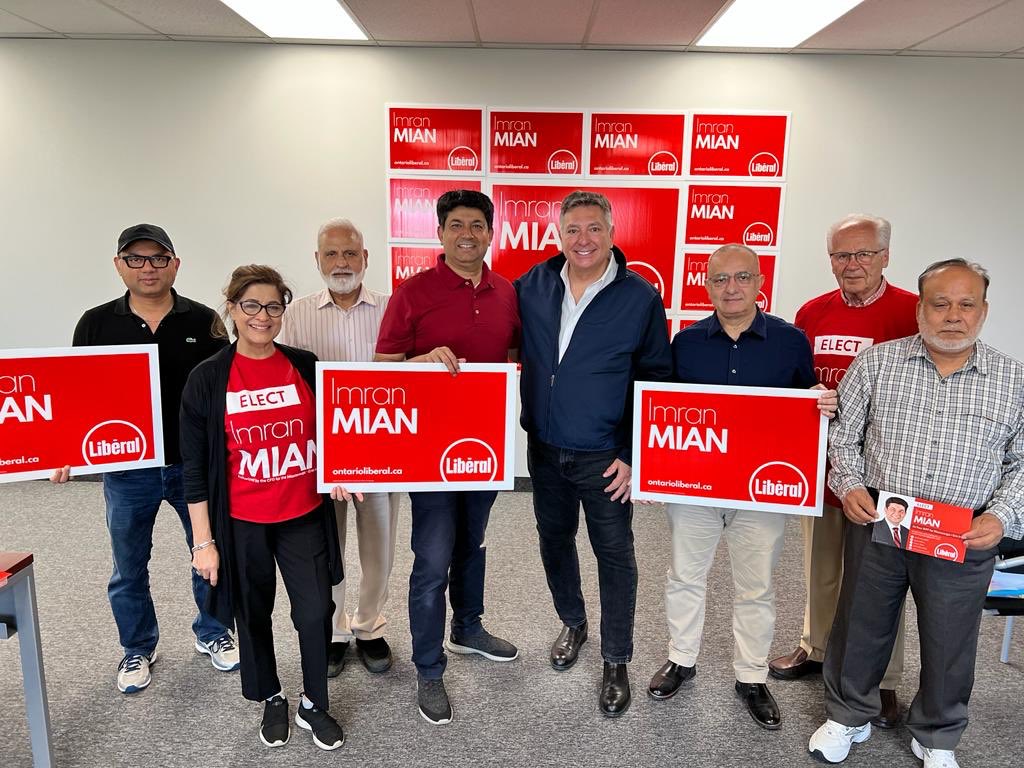 “I will prioritize issues surrounding affordable housing, a publicly funded education system, quality health care, seniors, and climate change,” his website reads. “With over 20 years of business and leadership experience, I understand the challenges facing our community and I’m ready to fight on your behalf for a better, greener and more affordable future for all Ontarians.”

He has participated as a volunteer for United Way of Peel Region’s South Asian Advisory Council as a founding co-chair and as vice president on the board of Family Services of Peel.

Prior to entering politics he worked as vice president of growth at mobileLIVE Inc. a software development company and was a senior commercial sales director at Info-Tech Research Group.