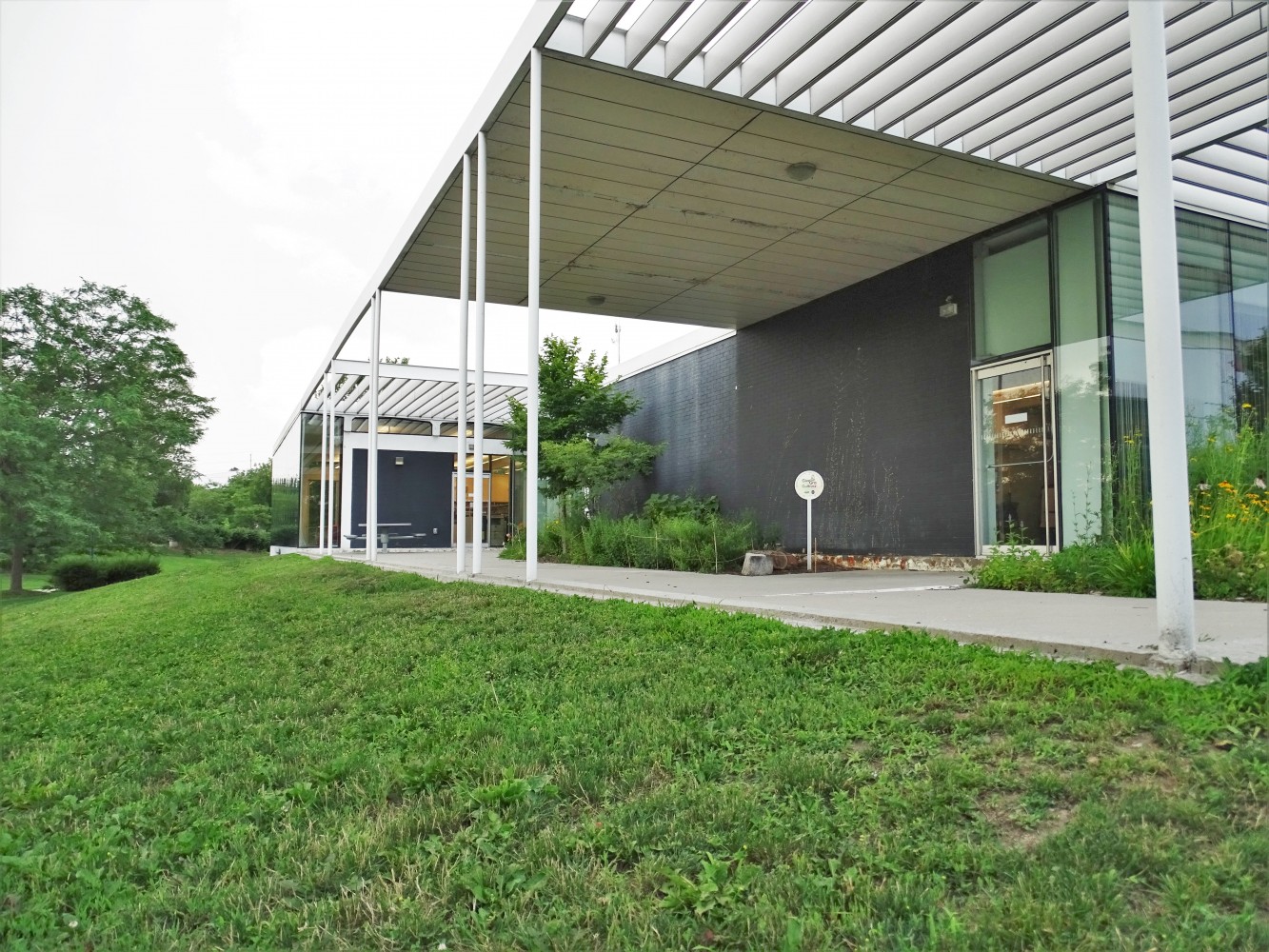 The library’s sleek design enhances the waterfront neighbourhood of Port Credit. Windows allow for natural light to illuminate the rows upon rows of books and the comfortable interior offers a welcoming space to learn, work or enjoy a quiet moment.

In 2013, the Port Credit Library was recognized as a neighbourhood jewel with a Governor General's Medal for its creative design and eco-friendly refurbishment.

“I know the library is at the heart and soul of our Port Credit neighbourhood,” Ward 1 Councillor Stephen Dasko said in a previous City press release.

But for those reading reports coming out of Mississauga City Hall, there was a sinking feeling. Now, an $8 million project has been approved by council to save the facility.

Buried deep under the $3.1 million facelift in 2013, the beautiful building has been slowly sinking into the soft, muddy soil. In July 2021, the structure had sunk so far down into the earth, Mississauga had to shut the doors to not endanger the public.

The sinking library, which has been located at 20 Lakeshore Road East since 1962, is an extreme example of the problems posed by aging facilities in Mississauga—a problem that could become much larger in the years ahead. Rapid growth in recent decades means Mississauga has clutches of buildings that are all relatively close in age, which means when repair bills come due, they may come due around the same time.

About half (52 percent) of the City’s buildings are above the age of 30 and are in need of investments, meaning a significant portion of City spending over the next 10 years will need to be dedicated to these facilities.

Buildings need constant maintenance and repairs to both the exterior shell and the electrical and HVAC systems that make up the inner workings. City buildings, like community and recreation centres frequented by the public, often require more repairs due to the sheer amount of use. As the City grows, this maintenance budget will need to grow with it. Climate change and the threat of more frequent extreme storm events also poses a looming threat to these facilities.

To keep all buildings on track, Mississauga endorsed an asset management plan to inform its decisions making in the years ahead. The report details the City’s two biggest asset classes, roadways/bridges and stormwater, which account for $9.2 billion worth of infrastructure.

The community-focused recreation centers, fire stations and libraries are often last in line when critical infrastructure ages. In a three part investigative series, The Pointer revealed how a lack of investment in City fire halls had led to many of them decaying considerably. The City was told some should even be torn down due to the state of disrepair.

When City staff know a number of assets are fast approaching the end of their life, it starts a debate between which is more critical to replace and the risks associated with its failure.

In a perfect world, Mississauga would be able to address the repairs immediately, but decades of low tax increases and freezes has exacerbated the infrastructure gap. Due to a combination of factors, including downloading of programs from other levels of government as well as constraints on their ability to earn revenue, municipalities across Ontario grapple with the gap between what repairs are needed in a given year, and the amount of money available to pay for them. Mississauga staff estimate the gap is going to total $40 to $45 million annually for the next decade.

In the case of the Port Credit Library, the 50 year old foundation beneath the fancy exterior has been “exhausted.”

Adding stress to the concrete piers underneath the library, is the soft ground from a high water table and landfill waste upon which the building was constructed. Prior to that, the site was home to the Faulkner Marsh. As urbanization occurred, problems grew with it. Residents and the nearby Lakeview Power Plant disposed of their garbage and coal fly ash on the site, but the actions have come back to haunt them.

In 1992, the City carried out the first of many renovations. At the time, there were no reports of structural damage. In 2013, the same year the building won the award, a routine condition assessment showed visual deterioration of some of the 27 piers holding the building up. Three years later a pilot project to address the sinking installed four to six large steel screws around three decaying piers to act as support mechanisms.

To make sure the building could continue to be operational and safe, the City had an engineering firm monitor the foundation bi-monthly until 2021. That was when considerable deterioration was found.

“Further loss of cross-section of some of the concrete piers and based on the recommendation of the structural engineering firm, and out of an abundance of caution, staff initiated the closure of the library for public use,” a council report reads. 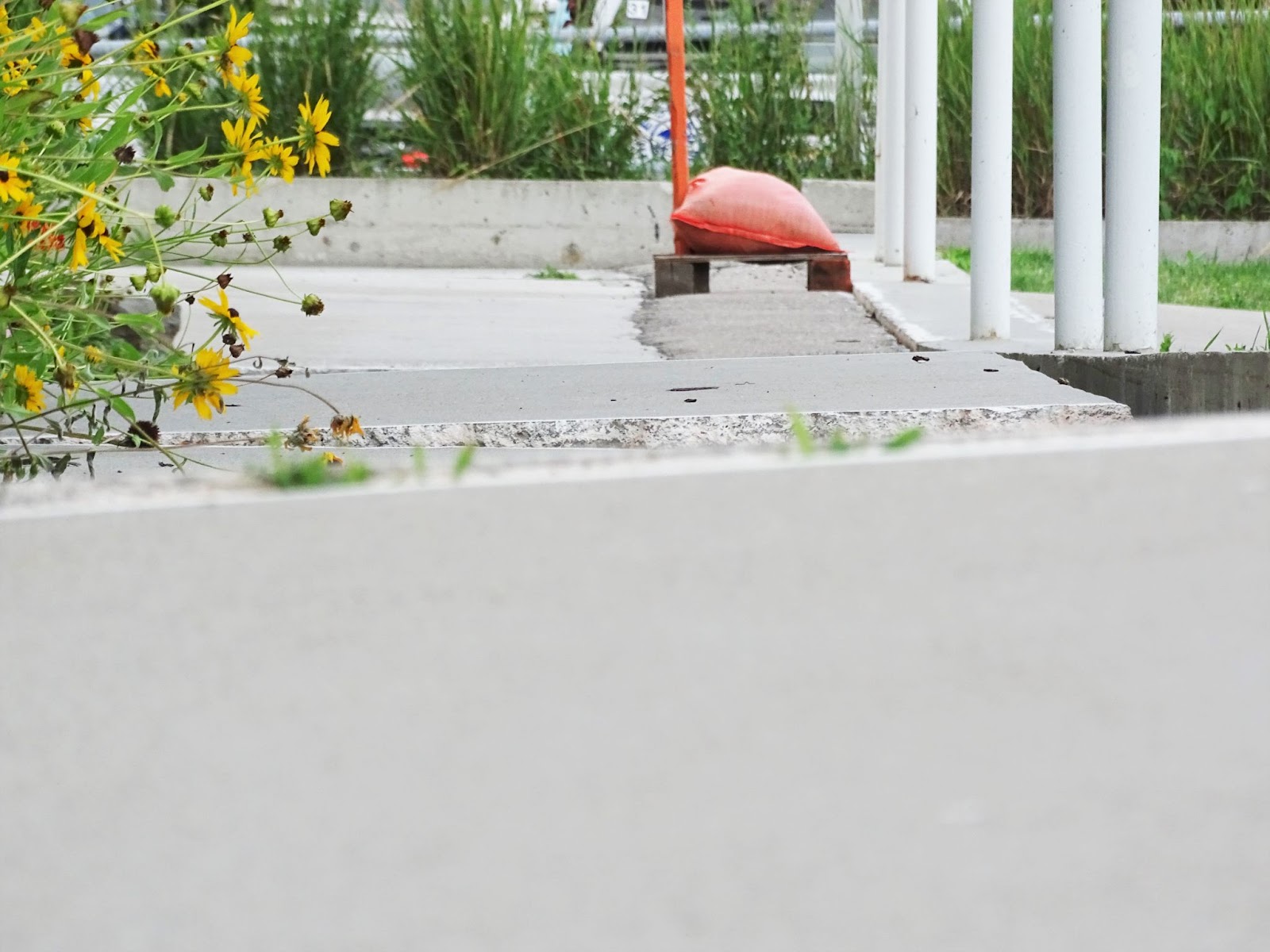 The cement sidewalk around the Port Credit Library shows signs of shifting, perhaps a signal of the sinking foundation.

In February, council approved a staff recommendation to undertake an estimated $6 to $8 million repair on the other 24 piers, equipping them with support beams like the 2016 pilot. The funding is split across two years, with $3 million being allocated in 2022 and the remainder in 2023.

This solution will see four to six support beams installed approximately 50 feet below ground level (or until bedrock) around the existing concrete foundation. With the complexity of stabilizing the foundation while the building still exists, workers will have to excavate most of the earth surrounding the library and slowly work through each of the 24 pillars. The entire project will take 20 to 24 months to complete, staff estimate.

Two other ideas were explored by staff, but not recommended as viable options to council. The first was to rebuild the library on the existing spot. A project that would cost approximately $18 million over three years. However, this option would do nothing to solve the existing problems plaguing the current building.

The most expensive option staff explored was the relocation of the library, an option that would cost approximately $22 million to acquire land, develop the site and build it. While it is the most expensive of the three, the 2022 City budget shows roughly the same amount of money was going to be spent on the library anyway.

Shari Lichterman, Mississauga’s Commissioner of Corporate Services and Chief Financial Officer, explained the City will be amending the amount forecasted in the budget as the approval of the repairs project over the next two years will potentially save $13 million of the expected maintenance and repairs between now and 2025.

“The existing $5 million project budget was included in the $21 million.  Therefore we are only adding $3 million to the project for a total cost of $8 million per the report,” she said in an email. “We are removing $13 million from the budget and returning to the reserves.”

Staff believe the work will keep the library stable for the next 50 years. However, with the building situated in a floodplain, and with increased threat of natural disasters due to climate change, it is possible the foundation becomes unstable much quicker.

“The engineering advice is that this solution allows the library to stay where it is for up to 50 years,” Lichterman told The Pointer. “Nothing is ever certain, but given the success of the pilot, we are confident it will be a viable long-term solution.”

One option not explored by staff was the co-location of the library within an existing or future building. The City of Brampton’s Library Master Plan explains if libraries are located within buildings like schools or community centres they are heavily trafficked and can become central hubs for a community.

The South Fletcher’s Sportsplex is one of the early adopters of the idea, with a co-located library opening in 1997.

This would not be news to the City of Mississauga. The 2019 Mississauga Library Master Plan states that co-locating within an existing City facility can work wonders for foot traffic through a library. Port Credit, Lakeview and Lorne Park libraries are not integrated into other buildings, and with their smaller than average square footage, accounted for only 10 percent of the 2016 to 2017 foot traffic, according to the document. Libraries attached to civic institutions accounted for between 64 and 66 percent of foot traffic.

One of the problems with moving the Port Credit Library or locating it within a new planned development is the current price of vacant land. According to Litchterman this option has been considered, but has yet to be tested.

Until the construction is finished, residents can continue to access books and computers at the Port Credit Arena.