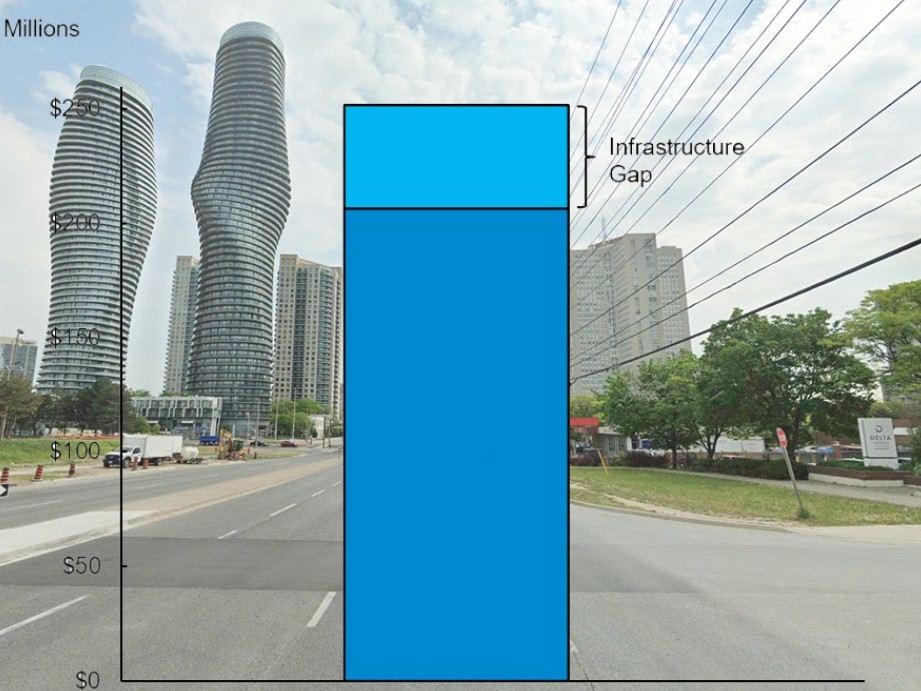 Feature image from The Pointer

After purchasing a new vehicle, the costs to keep it running well throughout its useful life can become an anchor on one’s finances.

Neglecting these investments, a missed oil change, an ignored rust patch, tires not rotated, that brand new car could get old really fast.

Not to mention sky-high insurance payments, sticker shock at the pumps and uncontemplated costs like pricey winter tires.

The needed attention to Mississauga’s buildings, roads and stormwater system, all of which require investments from the annual municipal budget  — but don’t always get them — is similarly challenging.

When money is tight, certain costs get neglected, even if it comes back to bite you twice as hard.

For decades, Mississauga councils have approved tax increases the City’s coffers can not afford, tightening the budget beyond its bottom limit. While politically popular — no residents like to see their tax bill go up — it means there is not enough money to maintain and expand infrastructure in a rapidly growing city. To help change course, and start budgeting more responsibly, council approved a 4.3 percent increase on the City’s portion of the 2022 tax bill, a surprising move for an election year.

City-owned buildings have aged beyond their healthy life-cycle — fire stations have even eroded beyond repair, while the removal of asbestos from some was neglected for years. Others that were badly needed, just to meet minimum safety standards for critical response times, were never even built, putting lives at risk.

The bill is now coming due as critical repairs and badly needed new infrastructure are becoming harder and harder to ignore.

But due to the budget shortfall, councillors are left to decide which roads, bridges, culverts and buildings are the highest priority and which can potentially be left to later years.

The growing infrastructure gap is the reason roads are showing signs of decay, buildings have leaky roofs or inadequate sewer systems get backed up.

The goal — in municipal parlance — is maintaining infrastructure in a “state of good repair”, which means ensuring the public road, bridge or building is safe and usable without major issues, or the water main is functioning properly with minimal risk of a break. To maintain existing assets in good condition, the city is planning on spending approximately $206.6 million each year until 2031.

This will keep the majority of critical assets in decent condition, but there is a list of items being left out of the plan.

In total, Mississauga owns about $13.6 billion in assets. It takes a massive investment to ensure this web of interconnecting infrastructure, from libraries to community centres and storm water pipes to sewers, is maintained in an operational state. In 2022 the City will be spending approximately $30.5 million on stormwater assets, $78.3 million on roads and $91.7 million on remaining infrastructure such as community centres, libraries, and fire stations. 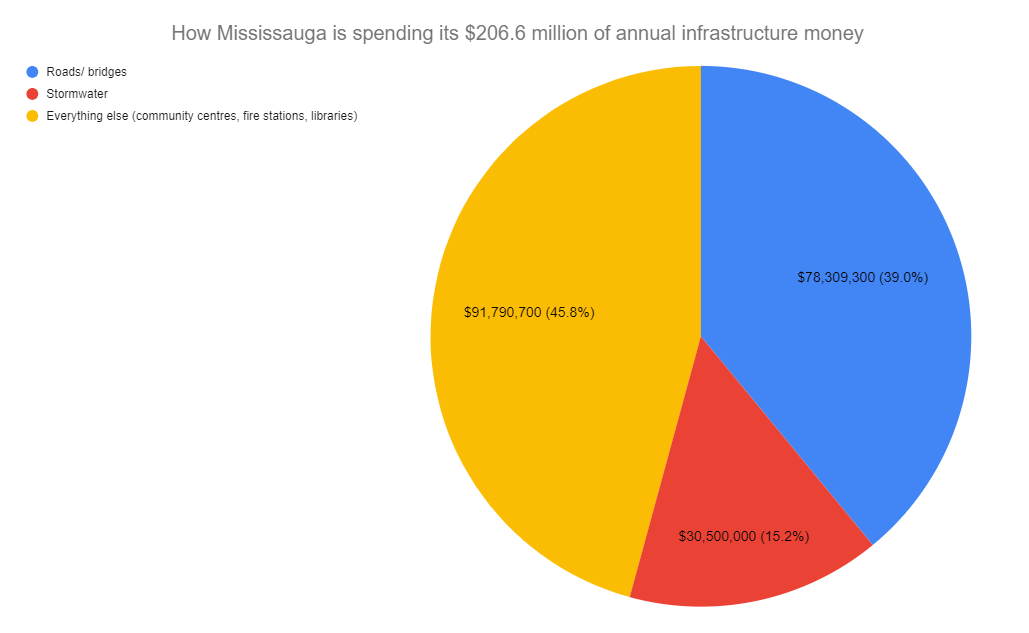 As a city built around the car, roads eat up a large portion of Mississauga’s infrastructure spending. In 2022, the $78.3 million is divided between bridge and structure renewal projects, major road construction and roadway rehabilitation efforts, according to Mississauga staff.

According to figures in the 2022 budget, even with the City spending millions on its existing assets, they will still fall short of the needed investment by approximately $40 to $45 million annually over the next decade. This means by 2031, if Mississauga cannot find the money to address this gap, it will total approximately $400 to $450 million worth of infrastructure investments that are sitting on the back burner.

“The City’s current funding sources do not allow for fully funding of the City’s SGR (state of good repair) needs,” the 2022 budget states.

This is even with the added investment from the City’s infrastructure levy — an additional tax the City has implemented to raise funds for infrastructure needs — and Mississauga’s federal Gas Tax contributions.

The City is relying on its asset management plan — a document that will assist in prioritizing needed investments — and assistance from upper levels of government to help bridge the gap.

“Implementation of asset management best practices as well as assistance from senior levels of government through continued infrastructure funding programs will provide opportunities to address some elements of the funding gap,” the budget states.

Some, but not all of the elements.

Looking at the overall infrastructure gap of $40 to $45 million annually, it does not provide an accurate idea of which assets will be hit hardest by the continued lack of resources. 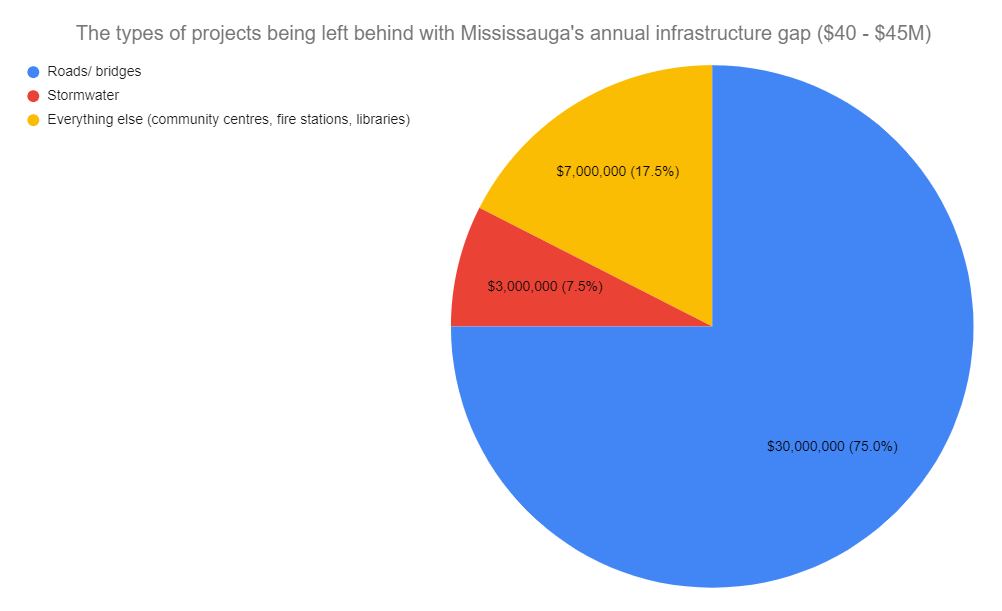 As one of the most costly assets, road projects will see the highest number of items getting kicked down the line over the next decade, with low-end estimates suggesting 75 percent of the projects being pushed back falling into this category. The end result? The City’s own calculations show the pavement quality in Mississauga will deteriorate significantly over the next 20 years.

According to data from the City, the number of pavement related projects that will be left unfunded between 2022 and 2031 is approximately $30 to $43 million. The 2022 budget states the infrastructure gap for stormwater is about $3 million each year over the next decade.

If the city were to lay out all their stormwater pipes straight the, the city could pump stormwater all the way from local sewers to the City of Winnipeg. Mississauga is also home to 80 stormwater management facilities, multiple creeks, rivers and man-made stormwater ponds. These expensive assets have a replacement value of $5.29 billion.

Approximately, $4 billion is the rest of the city’s assets; fire stations, community centres and libraries. This means if Mississauga were to replace every building, roads and pipe it owns the overall total would come to $13.6 billion. 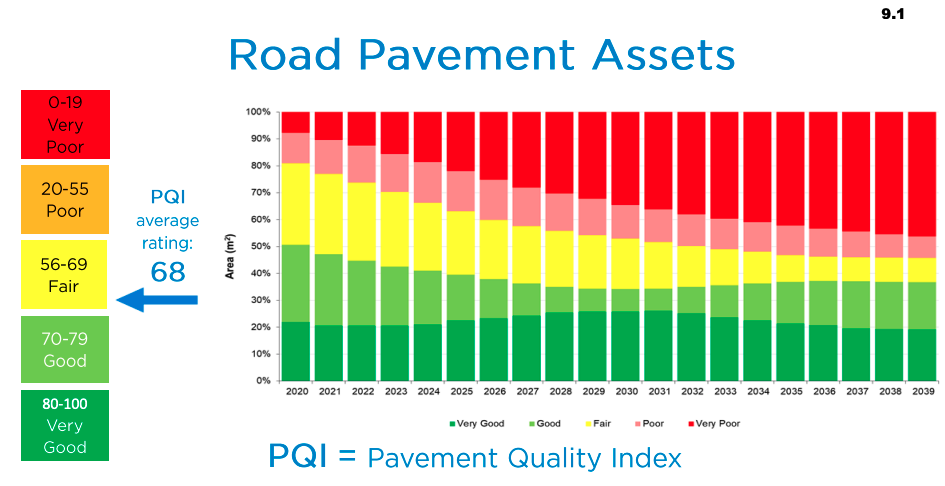 The number of roads that fall into the category of “very poor” quality, will increase drastically over the next 20 years in Mississauga.

(Graphic from City of Mississauga)

New builds don’t need to be fully repaired each year, but similar to a household budget and the necessary maintenance on any home, these buildings need annual maintenance to keep them in good shape over time. Money is put aside from the Gas Tax, infrastructure levy and reserves to assist the city in maintaining all infrastructure, with the stormwater charge specifically dedicated to maintaining those assets.

The majority of funding for large infrastructure projects comes from higher levels of governments. Municipalities can request funding from the Ontario government, but it is left to the government of the day to decide where and how to award resources. Chris Chen, executive director of Asset Management Ontario (a non-profit organization aimed at giving advice to municipalities) says, when handing out project funding, the Province wants to ensure it sees a good return on its investment.

To help make sure the city prioritized the correct infrastructure, Mississauga adopted an asset management plan (AMP). The 250-paged document outlines the state of repair the core assets are, how to maintain them and how large the infrastructure gap is. The AMP states the overall infrastructure is good, but some of the assets are showing its age.

Roads in particular have an average condition ranging from “fair” to “good” — although that will drastically change over the next 20 years — and while many of the bridges and culvert structures are showing general signs of deterioration, they are reported to be in “good” condition.

One of the main principles of asset management is making sure to prioritize funding for infrastructure that has a higher consequence and likelihood of failure. A bridge collapsing has dangerous implications for the safety of the community, whereas the closure of a library will likely not cause danger to the public.

Because of the safety implications of bridges and culverts, Mississauga prioritizes the maintenance and renewal of these structures. Most of them (85 percent) found in the city are in good condition, only 14 percent are listed as fair condition, and less than one percent are evaluated as poor or very poor.

With extreme weather events happening more frequently as a result of the changing climate, cities across the globe are being forced to adapt their infrastructure to handle the water flows these storms deliver. Unfortunately, oftentimes, changes are not made until after disaster has already struck. Mississauga’s flooding in 2013 being a perfect example.

Mississauga’s stormwater system is in an overall “good” state, meaning the city has invested adequately to maintain the infrastructure, or a large proportion of it is relatively new.

Each of these main assets have their own infrastructure gap and contribute to the overall $40 to $45 million gap. Previously the City was presenting each the infrastructure gap on an annual basis. For example, in the 2021 budget, the gap was listed as $291 million.

According to Mississauga staff, the gap was previously calculated based on historic value of the asset, factoring in inflation, and then dividing that number by how many years staff believed the asset — road, bridge, building etc — would remain in usable condition.

Staff say because values for assets change every year, the 10-year evaluation is a better depiction of the infrastructure gap over a period of time.

“A point estimate is probably more misleading because there are so many assumptions that go into how you calculate an infrastructure gap,” Chen told The Pointer. “Calculating the infrastructure gap over a longer duration enables lifecycle management activities to be averaged over time, which is usually a more accurate reflection than just calculating it over one year.”

This effort to maintain consistent investments is further complicated by the fact that municipal councils are elected every four years. Changing the dynamic of who represents the community could see funding moved around, especially around elections when the current council is seeking another term.

According to Chen, the Region of Peel is a “gold standard” in asset management for municipalities across Canada. Peel’s long-term financing strategy is integrated with its AMP and it also has brought all infrastructure planning together, to create good decision-making for all assets.

All Ontario municipalities are required to submit AMPs to the province as per the regulation which passed December 2017. Finalized plans that include evaluations for all city infrastructure are to be sent to the province by July of this year.

The reason Mississauga has moved to showcase the infrastructure gap as a range is because of how quickly the city is growing. It’s a better financial practice to showcase a range that will likely change as large amounts of people flock to the community. If for example, the gap were to change from $40 to $45 million, to $45 to $50 million in 2023, it would explain a dire need for the city to maintain more of its assets.

“You have to actually plan your new infrastructure accordingly,” Chen said, “you may need to replace certain parts of your water wastewater more frequently, if you know that there's going to be an influx of people.”

In the next 30 years Mississauga will grow to approximately one million residents, an estimate which could outpace itself quickly. Without a plan, the city’s long term financing strategy would be decided yearly leaving it exposed to unforeseen costs at a later time.

However you look at the gap, Mississauga is in a difficult position. In an ideal world the city could maintain infrastructure as it ages, replacing it only when absolutely necessary — spreading out the burden on the budget and taxpayers over a number of years. Instead, Mississauga must contend with past decisions of council that have allowed taxes to remain low and infrastructure assets to decay faster than initially expected. That bill is now coming due.