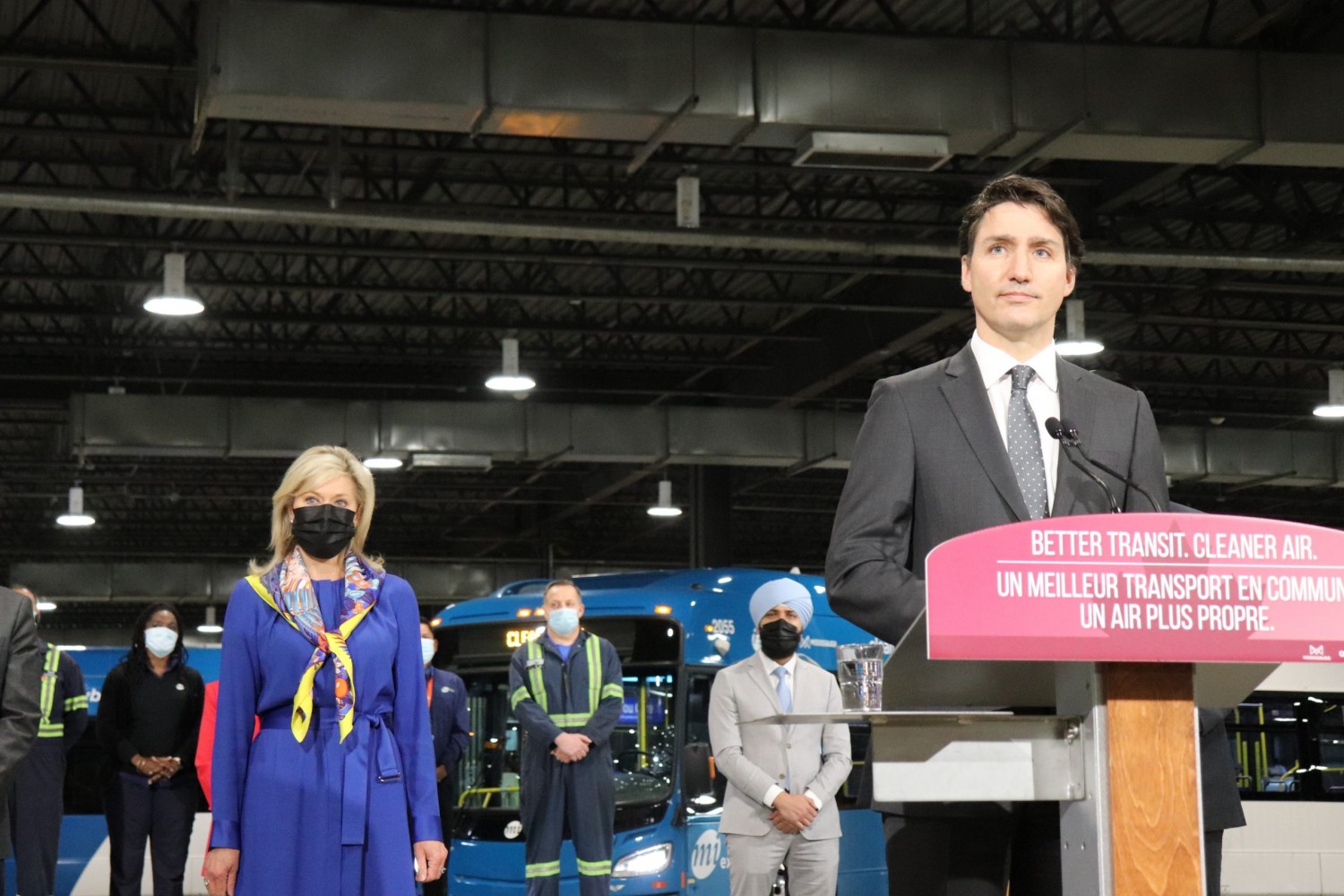 On March 4, Prime Minister Justin Trudeau, standing in a Mississauga transit facility, announced one of the largest funding committments in the city’s history.

The joint investment agreement with the Province of Ontario will see the City of Mississauga receive nearly $500 million for transit initiatives in the city—$271.2 million from Ottawa and $225.9 million from Queen’s Park—including construction work on the Dundas BRT and hundreds of new green buses. The federal money comes through the Investing in Canada Infrastructure Plan (ICIP), aimed at projects that will connect the city across strategic areas of growth and achieve greenhouse gas (GHG) emission reduction targets.

Mississauga will need to pitch in $180.8 million for the three projects.

The announcement sets up Mississauga to realize its historic transformation away from the car, and will allow two of the biggest transit projects in the city’s history to be constructed in alignment with one another. The Hurontario LRT, the city’s largest transit undertaking ever, will connect with the Dundas BRT, and both can now be built on a similar schedule, possibly reducing disruption and the need to tear up surface and subsurface infrastructure twice where the two corridors meet.

They will create north-south and east-west transit connectivity across and up and down much of the high growth municipality.

A large portion of the funding that was just announced will go toward the purchase of 314 new hybrid electric buses and the replacement of 44 existing diesel vehicles in the MiWay fleet. This will assist Mississauga in switching over its transit fleet to greener alternatives and drastically reduce emissions. Currently, two-thirds of the city’s corporate emissions come from MiWay according to a 2020 report. The federal government will pitch in $143.8 million, Queen’s Park $119.8 million and the City of Mississauga will cover approximately $95.9 million for the transformation to a much cleaner local transit system.

A breakdown of the joint funding and the initiatives funded.

Friday’s announcement follows repeated requests from the City of Mississauga for assistance to fund the vital Dundas bus rapid transit (BRT) system. Ontario will invest $101.8 million, Ottawa will contribute $122.2 million and Mississauga is left to fund the remaining $81.5 million for the corridor itself. The money will be used to design and construct the new BRT line from Etobicoke Creek to Confederation Parkway on Dundas Street East, stretching about seven kilometres.

Just under $10 million is set aside for the construction of eight queue jump lanes on Derry Road and Eglinton Road and nine on Dixie Road. These designated lanes allow buses to bypass traffic at intersections either through an individual bus lane or with a specific signal. Mississauga is committing $3.3 million to reconfigure the intersections.

“These investments are important to Mississauga for more reasons than one, making transit more reliable, effective, efficient, and will encourage more people to get out of their cars, and help us collectively reach our climate change targets,” Mayor Bonnie Crombie said at Friday’s announcement.

The announcement comes after years of both the provincial and federal government largely ignoring Mississauga and its desperate pleas for transit funding. Since the inception of the Dundas Connects Master Plan (2018), Mississauga has asked both governments to step up to the plate to assist with funding for a project that will revolutionize the city and integrate its transportation network into the Greater Golden Horseshoe’s plan for a less car-reliant commuter design.

Recently, City Council endorsed recommendations to both governments before the 2022 budgets are finalized. Both documents contained specific asks for sustainable, long-term and predictable funding, with money to support priority transit.

Of the recommendations, the Dundas BRT got a special mention, as the City’s second largest higher order transit project on the go next to the Hurontario light rail transit (LRT) system. Both projects have large price tags—but the benefits for the future of Mississauga are significant.

The ultimate vision for the Dundas BRT is to extend it across five municipalities (from Highway 6 in Hamilton to the recently redeveloped Kipling Transit Hub in Toronto’s west end) along approximately 48 kilometres, allowing residents to commute across the sprawling cities without the delays that can come with taking congested GTA highways. Currently, the funding and design process is for 7 of the 17 kilometres of Dundas, dubbed the Mississauga East segment.

The first part of the project focuses on the eastern part from Etobicoke Creek to Confederation Parkway in Mississauga.

“This is the kind of regionally integrated transit connection that we need in order to secure our future as a competitive and world class city,” Crombie said.

Mississauga has initiated a Transit Project Assessment Process (TPAP), an expedited environmental assessment which is undergoing a public consultation until the end of March. Both preliminary designs and preparations for environmental accommodations have been finished while stakeholder consultations are ongoing.

As the oldest road in Mississauga, Dundas Street has always played a crucial role in connecting people from east to west across parts of Etobicoke, Mississauga, Oakville and Burlington. It is a major commercial corridor and has the potential, with the right transit investments, to house significant residential growth, particularly higher density development that works best near major transit corridors. Currently, a mix of businesses adorn the spread out streetscape, along with some taller residential buildings, but mostly low-slung units that stretch across seven of Mississauga’s diverse wards. 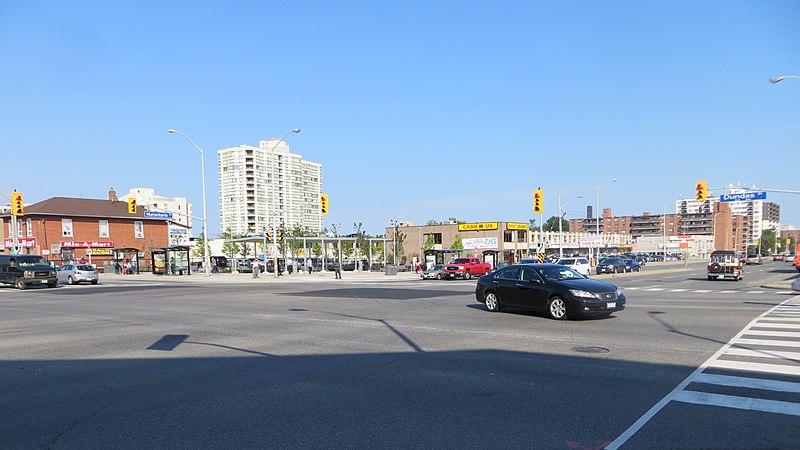 From a pedestrian/cyclist view, Dundas Street is dominated by vehicular traffic. This has created a classic suburban roadway not fit for a walkable community.

Dundas Street is well loved, by not only historians, but car centric residents. Some feedback given to the City expressed just how congested Dundas can get during rush hour, limiting movement and adding pollution into the local airshed. The lack of cycling and pedestrian infrastructure deters the public from enjoying the surrounding features without a personal vehicle. This also creates an unsafe travel environment for cyclists who share the four (at times six) lanes, making it difficult to navigate the corridor without a car.

As part of the Dundas Connects Master Plan consultation process, residents expressed a desire to see the Dundas streetscape improved, with a more mixed transportation design and less accommodation for cars, to help residents make active movement more of an option. The drab pavement, lack of surrounding greenspace and incessant noise of heavy vehicles can create an unwelcoming atmosphere. The construction of the BRT, with elevated design elements, enhanced streetscaping and inviting commercial opportunities served by the higher order transit will turn Dundas Street into a destination, not just a through-route, planners and other stakeholders hope.

The overarching design of the BRT will have a significant benefit for those travelling between cities in the GTHA, while also creating significant local benefits through investments in the corridor. The master plan explains very few trips along the thruway will be excessively long, instead connecting residents to transit, a range of services and nearby amenities that will be located along the route. 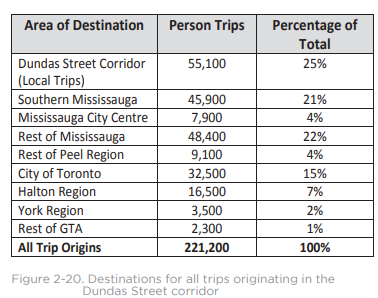 The Dundas Connects Master Plan analyzed how many trips occur on the specific stretch of road and where they originate.

When complete, the BRT will seamlessly match up with the future Hurontario LRT and Milton Go Line, and offer access to Downtown Mississauga and the University of Toronto Mississauga campus.

The City has worked diligently to move the process forward, but it will take years to be completed. In the time since the master plan was released and the TPAP started both upper tier governments have provided very little funding. Both contributed to a much shorter, smaller BRT corridor on Lakeshore Road East.

Early January 2021, the federal government pitched in $62 million, while their provincial partners contributed $51.5 million. Most of the project funding was for state-of-good-repair and technical changes, making the small commitment to the Lakeshore BRT the eye-catching headline, despite its relatively small scope.

Compared to the Dundas BRT, the Lakeshore BRT is much smaller. With only three stops and two kilometres of express routing, the projects are night and day.

The first step of the Lakeshore project is to run buses from Long Branch GO in Etobicoke to Port Credit GO in Mississauga (not all of this would be part of the express route portion), serving the future Lakeview Village and other new developments planned for the high-growth corridor near the city’s eastern Lake Ontario shoreline.  The funding that was committed for the Lakeshore transformation assisted with the design and construction of the first phase.

Just after the 2019 Federal Election, Mississauga made a list of all the projects that needed funding, totalling $847.5 million from all levels of government. Money replacing the aging bus fleet for greener vehicles made up 42 percent of the application, whereas the Dundas BRT accounted for 36 percent, while a number of smaller components and some investment needed for Lakeshore rounded out the almost one-billion-dollar ask.

During the 2022 City budget debates Mississauga did not wait around for the higher level governments, committing its own funding in the 10-year capital plan and budget.

This will invest $43.5 million toward the Dundas BRT, with the bulk of the approved funds going toward design and construction. But Ottawa and Queen’s Park were always going to be needed. This is where council and senior staff deserve credit, for using a mix of pressure and promise to win over both Ottawa and Queen’s Park, where the city’s six electoral seats are highly coveted. 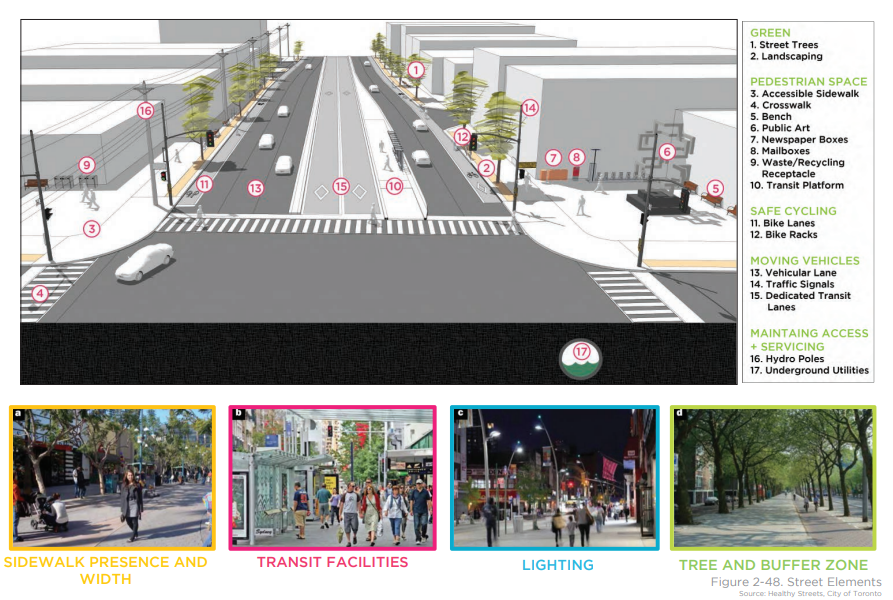 Mississauga wants to revitalize Dundas Street by creating a walkable area for all residents not just those who come in their personal vehicles.

To assist during the tight pandemic budgets, councillors voted in July 2020 to enter a cost-sharing agreement with Metrolinx to assist the City in starting the initial steps for the Dundas BRT. The deal with Metrolinx did not impact the ICIP application to Ottawa, instead it offered Mississauga a cost-saving on the work required before shovels enter the ground. Only planning work took place in partnership with the provincial transit agency.

Initially the City was expecting to sink $11 million into the planning of the BRT. Instead, with the deal between Metrolinx, the costs are split almost 50-50, leaving the City to pay around $5.5 million for the early work.

MiWay committed $108.8 million on bus maintenance and new hybrid buses in 2022. Last week’s historic funding announcement will allow for even better service and faster replacements of the old diesel vehicles. The rest of the funding will be provided over the next few years, as the major construction phase of the BRT begins, City staff told The Pointer.

The massive funding commitments from Ottawa and Queen’s Park have sealed the deal for the instrumental project, allowing residents to eventually move across Mississauga easily using public transportation instead of personal vehicles.