Premier Doug Ford has committed to a one-time $5,000 “retention bonus” for front-line nurses. The payment is offered as an incentive for them to remain in the profession following two thankless years of toiling through a global pandemic with limited time off and meager pay increases, both of which have combined to exacerbate Ontario’s nursing shortage.

In a February 11 press release, Ontario Nurses’ Association (ONA) president Cathryn Hoy said the union was able to negotiate the bonus for all frontline nurses in publicly-funded facilities following two meetings with Premier Ford and Minister of Health Christine Elliott—both have previously pushed back against the key request of nursing organizations, the repeal of Bill 124—which locked pay increases for nurses at 1 percent for three years starting in 2019.

“While the Premier has not agreed to repeal Bill 124—yet—we have negotiated concrete commitments to implement several measures to fix Ontario’s serious nursing shortage,” states Hoy in the press release.

Apart from the bonus, the government has promised to resurrect the Late-Career Nursing Initiative, the New Graduate Program, and work with the Ontario Hospital Association to ensure exhausted nurses can take vacations, according to the ONA.

The Late-Career Nursing Initiative works to bring back retired nurses who could share their experience, expertise and mentor early career nurses, preparing them for the demands of Ontario’s healthcare needs, says Angela Preocanin, the first vice-president for the Ontario Nurses' Association.

The government has not provided any details on the implementation of these new measures, ONA said in a follow-up statement Monday, and any bonus will need to be approved by the Treasury Board. According to Hoy, the Premier indicated the retention bonus discussion will occur at the Treasury Board as soon as next week for approval.

“Premier Ford and Minister Elliott had another productive meeting with the ONA during which they discussed a series of options to attract, train, and retain more nurses,” Bill Campbell, a spokesperson for the Ministry of Health, told The Pointer last week. Campbell did not comment further on whether the ministry is considering exempting nurses from the much-maligned Bill 124, whether the $5,000 bonus would be a before or after taxes amount, or when further information on the rollout would become available.

In its next meeting with the Premier, set to occur next week according to reporting from the Toronto Star, the ONA is looking to discuss fast-tracking programs that help individuals bridge the gap between registered practical nurse (RPN) and registered nurse (RN) much quicker, and ensuring that internationally educated nurses (IEN) can enter the workforce quicker, as well as an increase in the number of full-time positions for nurses.

Preocanin says many IENs that choose to settle down in Ontario have to take up menial jobs, much below their level of qualifications, because the current process to qualify them to enter the nursing workforce can take years. 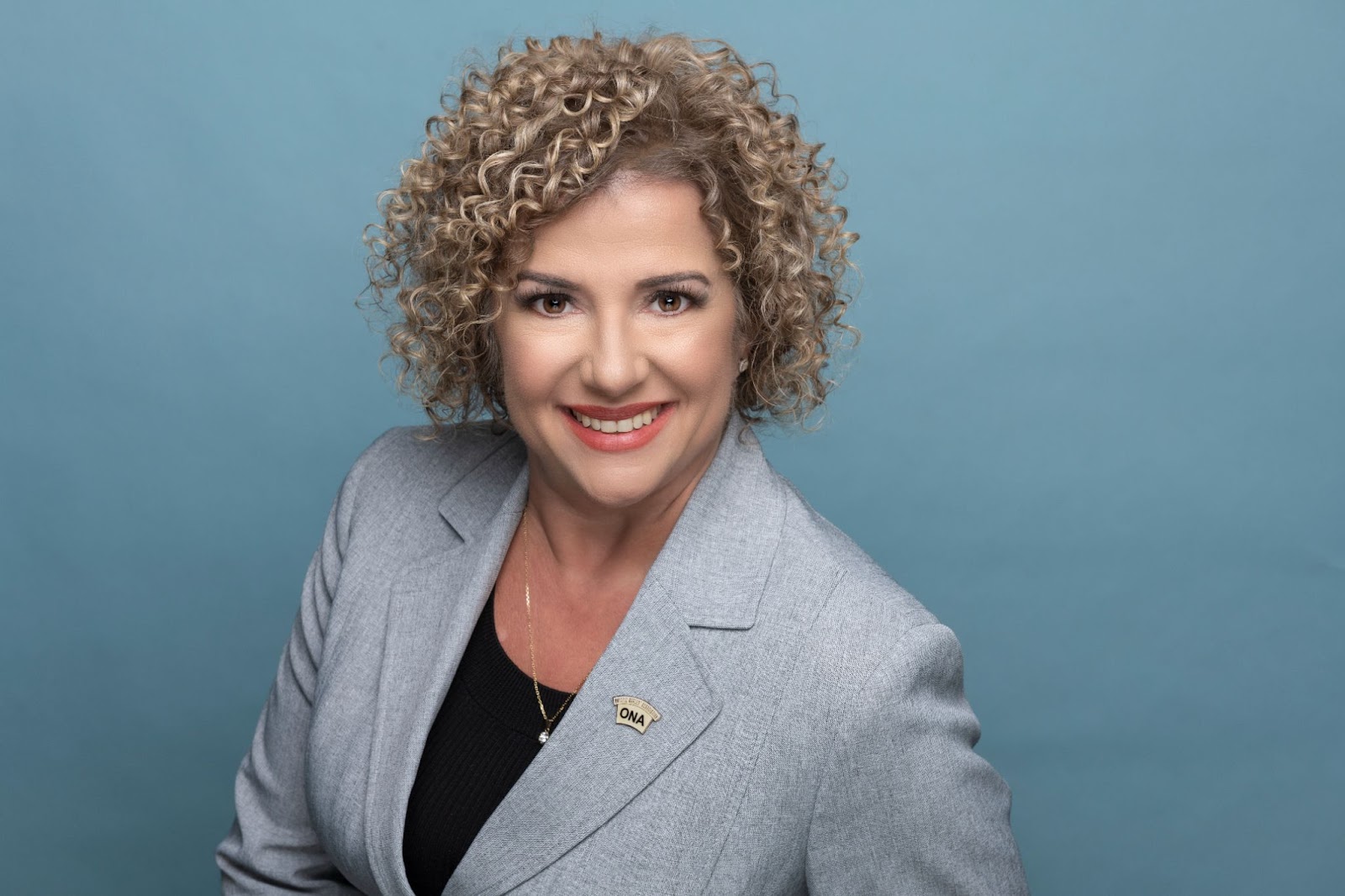 Angela Preocanin, the first vice-president for the Ontario Nurses' Association.

“To have an IEN process through the system can take anywhere (between) two to five years to have them come up into an actual registered nurse, or registered practical nurse,” Preocanin says.

Doris Grinspun, the CEO of the Registered Nurses Association of Ontario (RNAO), says the retention bonus is a nice gesture, but not what nurses deserve.

Grinspun says the bonus is like having “the salad of the dinner.”

“The main course is still missing,” she says.

Dianne Martin, the CEO of Registered Practical Nurses of Ontario (RPNAO)—the organization is also known as WeRPN—told The Pointer that a $5,000 bonus would be very helpful for nurses, but it’s not something that they requested from the government.

Martin says there are some RPNs who would find even $2,000 or $3,000 very helpful, but after the one-time bonus they are still left earning wages which are not sustainable to keep them in the profession.

“The amount of difference it will make in terms of retaining them in the profession probably won't be very big.”

According to a survey conducted by the RNAO in March of last year, 13 percent of nurses between the ages of 26 and 35 reported they were very likely to leave the profession after the pandemic.

The 1 percent salary increase locked in for nurses as a result of Bill 124 actually results in a reduction of pay when inflation is considered, the RNAO has said.

According to Statistics Canada, in January 2022, inflation surpassed 5 percent for the first time since September 1991, rising 5.1 percent on a year-over-year basis and up from a 4.8 percent gain in December 2021. It means the costs of living are increasing at more than four times the rate of nurses’ pay.

Unions and nursing organizations have long been calling on the PC government to repeal Bill 124, which was introduced before the pandemic.

Preocanin says the wage suppression bill has affected nurses’ ability to collectively bargain, and not having a wage increase in several years, despite crushing workloads due to COVID-19, is disrespectful.

The province was short of 22,000 RNs before the pandemic. COVID only made matters worse.

“The staffing ratios are horrific, and nurses are just not mentally prepared to take any more. So, they're leaving – they’re saying ‘I can't cope anymore,’” Preocanin says.

The already short-staffed nurses, many having worked without any vacation in the past two years due to the demands of the pandemic, have been working more than 12-hour shifts despite facing compassion fatigue — without much support from the province.

Last week a survey by the Canadian Mental Health Association (CMHA) found that the number of people seeking mental health support in Ontario has gone up from 1 in 5 to now 1 in 4 people.

While there is an increase in those seeking mental health help across the board, nurses are affected more than any other profession, Mental Health Research Canada (MHRC) data show.

“Our previous research indicates that the profession diagnosed most frequently is registered nurses,” the MHRC website states. 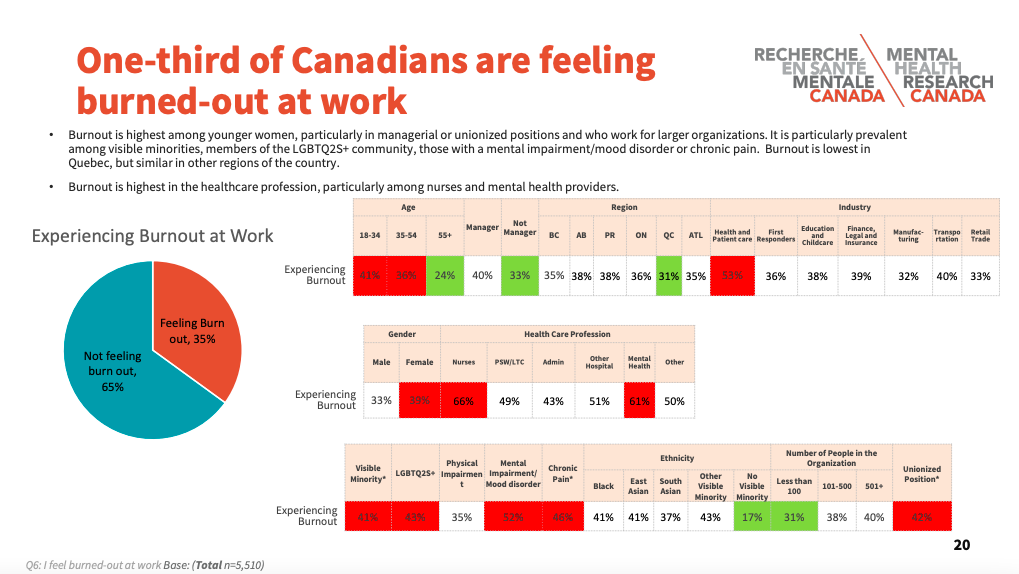 Burnout is highest in the healthcare profession, especially nurses and mental health providers.

Out of all the people feeling burnt-out at work, the number is highest among nurses and mental healthcare professionals, the survey by MHRC found.

The December 2021 survey shows that 66 percent of the nurses in Canada reported feeling burnt-out.

Manuel says she would have been much happier to see the Premier consider additional designated funding to support counseling services for nurses and other healthcare professionals.

Advocates and nursing professionals are still left with many questions about who will receive the bonus—RNs, RPNs or both—and when it will materialize.

“We are asking that the $5,000 (be) for every single nurse— for RN, RPN and Nursing Practitioners (NP)—in all sectors and we are still asking that because if not, there is nothing actually for the current nurses,” Grinspun says.

She is hopeful that this dialogue with the government and the retention bonus is only the beginning.

“So that nurses know something else is coming up and that's what we're expecting,” she told The Pointer last Thursday.

This Thursday, the RNAO plans to host an event at Queen’s Park to lay out recommendations for alleviating the ongoing nursing shortage in Ontario.

Minister Elliott and Ontario opposition party leaders Andrea Horwath, Steven Del Duca and Mike Schreiner have confirmed their presence, but Premier Ford is yet to respond, a spokesperson for the RNAO told the Pointer Tuesday.

The ONA's first vice-president Preocanin, says that the nurses will continue to push to repeal Bill 124.

“That was never an option for us, that they give us the money and we'll stop talking about Bill 124. We clearly identified that Bill 124 was still a barrier for us and that's not going to change,” Preocanin says.

“Nurses are the backbone of health care anywhere in the world. Without nurses, you don't have health care.”