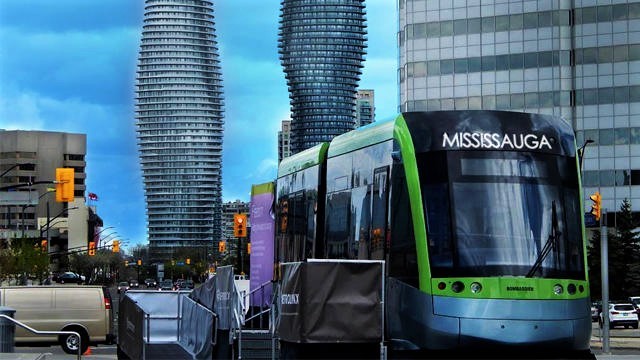 Back from the dead: Ford says cancelled Hurontario LRT loop in Mississauga city centre will be built

The Hurontario LRT downtown loop has been resurrected, after Premier Doug Ford casually offered Mississauga a pre-election gift at a Monday press conference.

Standing at Cooksville Go Station, surrounded by Mississauga’s PC MPPs honouring former mayor Hazel McCallion, who turned 101 (not a typo, for those unfamiliar with the Hurricane), the Premier took his turn to address the crowd.

“After we get moving on this [the LRT] I’m sure [Mayor] Bonnie [Crombie] will be calling me or the Minister [Caroline Mulroney] about continuing the loop around [downtown], that’s something we all want and we’ll make it happen eventually, sooner or later,” Ford said as he looked to the current mayor.

“My Finance Minister and President/Treasurer, will probably shoot me through the screen for saying that right now, but that's our goal to make sure that we finish the loop,” Ford said. 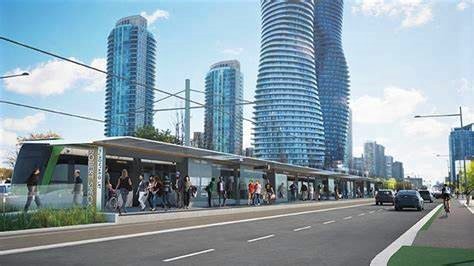 A rendering of the Hurontario LRT near downtown.

During the Premier’s remarks Mayor Bonnie Crombie looked delighted to hear about the LRT loop coming back, something she’s been championing since it was cut by provincial transit agency Metrolinx, under Ford’s cost-cutting budgeting, in March 2019, less than a year after he took office.

“Oh that was overwhelming, that was such great news,” Crombie said, referencing the comments from the Premier on the loop.

In an email to The Pointer, Mayor Crombie explained how important the loop is to making the LRT more accessible for residents and connected to the broader transit system. Since it would travel around the heart of Mississauga’s downtown, jobs, businesses and housing are quickly forming around the route.

“I am absolutely thrilled that the Premier shares our enthusiasm for the Loop and has expressed that it’s something that he wants to make a reality,” Mississauga’s Mayor said.

She confirmed with The Pointer her office is reaching out to the Premier to “determine next steps.”

The seemingly flippant comment from Ford happened at an announcement naming the LRT line after former mayor McCallion. The Premier did not explain a timeline on when the loop could be finished, how many LRT vehicles would need to be added or updated costs and the related funding needs.

Experts have told The Pointer the downtown loop could cost between $300 million and $400 million.

Anne Marie Aikins, head of public relations for Metrolinx, told The Pointer she was unaware the Premier would mention the loop at today’s media event.

“Whether or not anyone knew, I can't speak for that, but I did not know it, personally,” she said.

Aikins did explain the idea of reintroducing the loop was not entirely a surprise.

“It didn't come as a huge shock to me,” she told The Pointer. “We're happy to keep talking about it with Mississauga that's for sure. So the door isn't closed, but our focus is getting it [the LRT] done.”

The downtown loop has been featured in all Mississauga’s asks to upper levels of government ahead of budget season and the federal elections in 2019 and 2021, hoping for concrete funding to bring it back. In March 2019, Metrolinx was attempting to shave costs from the $4.6 billion project; the loop saved, according to Pointer sources, at least $200 million. The axing of the loop cut two kilometres of track.

Originally, three stops were to go around Square One shopping center, helping to reduce car traffic from the area, transform the downtown into a walkable community and decrease transit wait times. Currently the LRT is one straight line from Port Credit to the southern edge of Brampton, at 18 kilometres long.

Since the touted inception, the road to the finish line has been all over the place. 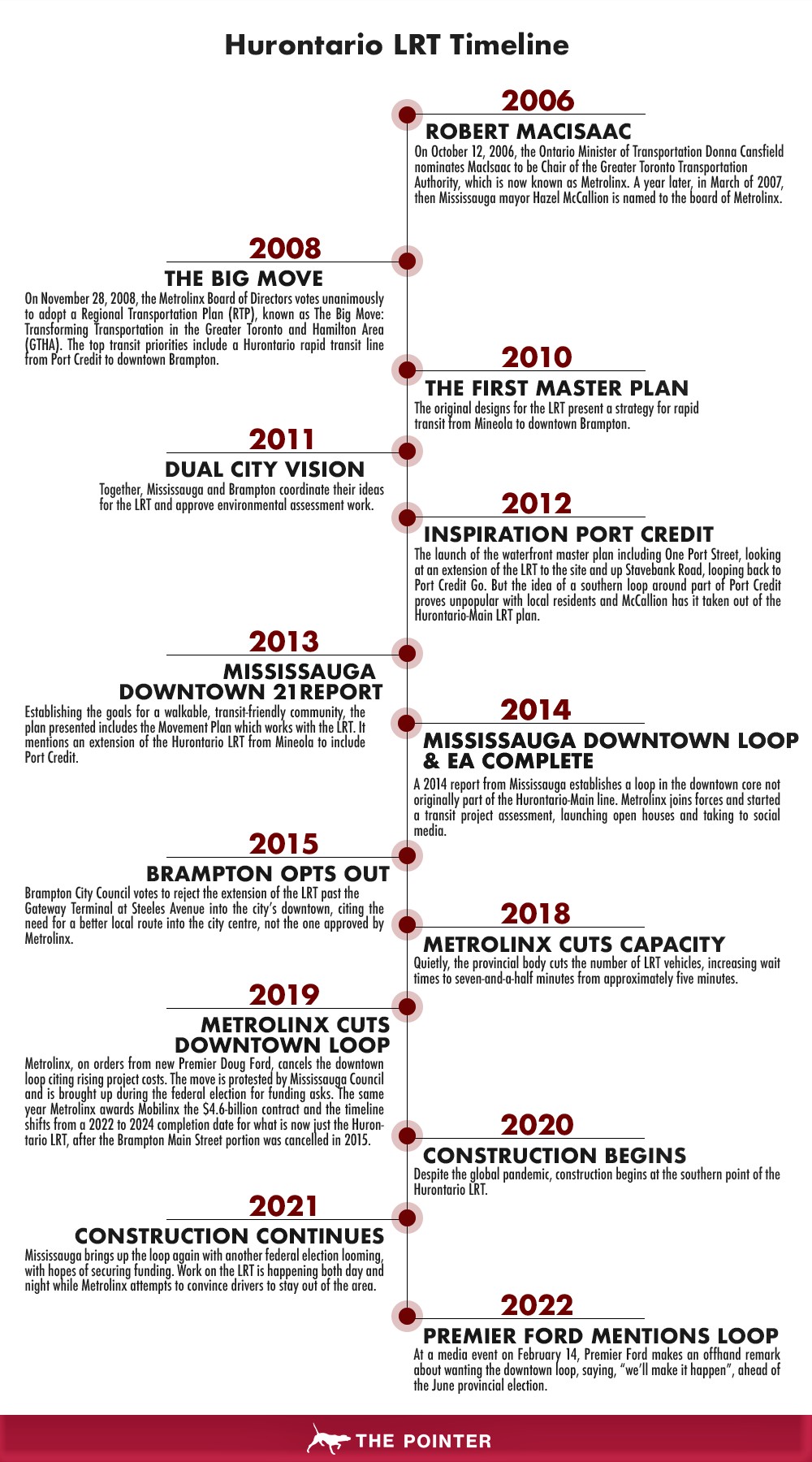 In 2015, Brampton City Council voted to reject the provincially funded LRT for its portion into the city centre. This cut 3.6 kilometres of track and stopped the project from going past Steeles Avenue at the Brampton Gateway Terminal.

Later, prior to the municipal election of 2018, Brampton council was split on which alternate, but provincially unapproved, alignment would be best, one along Kennedy Road or McLaughlin Road into the city centre.

As city council shuffled during the 2018 election, those options for Brampton were scrapped, and the Main Street alignment, with a possible tunnel, was put back on the table, while Metrolinx quietly cut the capacity of the Hurontario LRT, increasing peak wait times by 50 percent. An Auditor General report revealed the number of vehicles dropped from 43 to 28, severely impacting the convenience of the higher order transit system.

The Brampton option yet to be selected (either a tunnel or surface route along Main Street, if either are feasible) remains unfunded and unapproved.

Though the length of the route was cut by about 10 percent due to Brampton opting out past Steeles, the capacity cut meant the number of vehicles dropped 35 percent. With less trains running, passengers can expect a seven-and-a-half minute wait during rush hour, instead of the roughly five-minute time prior to the capacity reduction, making the LRT a less appealing option.

The following year, Metrolinx, under the PC government’s direction, cut the downtown Mississauga loop. The move was protested relentlessly by City Council ahead of the 2019 Federal election, hoping Ottawa would chip in to pay for the cancelled portion. A Mississauga Matters campaign featured the loop as one of the top priorities for the City and Mayor Crombie took every opportunity to revisit the ask.

“We ask our federal candidates, every party, to become familiar with the issues that matter to Mississauga,” Crombie told The Pointer October 2019. “These are council-adopted priorities. But as well, these are concerns that we hear from our residents as well in our planning meetings, in our outreach meetings, in our town hall meetings. We want all candidates to become familiar with us, so they can advocate for them should they be elected.”

While the election was happening, Metrolinx awarded the $4.6-billion contract to Mobilinx, the group previously identified as the preferred partner. While the public was distracted by the federal campaign, Infrastructure Ontario posted a 2024 completion date, two years later than the original 2022 launch date.

Previously through a City spokesperson, The Pointer was told the route’s design could allow for a downtown loop in the future.

Aikins confirmed Monday the design and construction of the line does not “preclude the reinstatement of the loop at a future date.”

She said Metrolinx’s goal is to continue the delivery of the existing project on time and within budget by 2024. While the current designs do allow for modifications, Aikins said, the design and costs will have to be updated if the loop is reintroduced. 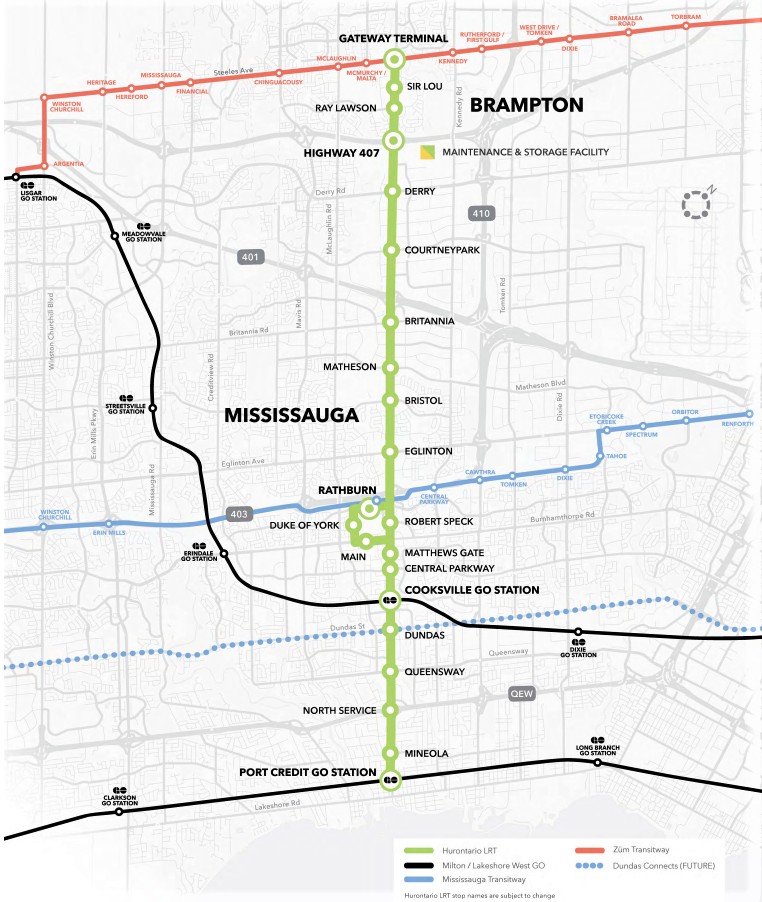 The original loop hosts three stations around Square One.

The contract with Mobilinx is a public-private partnership that will see the Hurontario LRT, which will now be named after Hazel McCallion, designed, constructed and run over 30 years, under the agreement, but still be publicly owned throughout. Crews are currently excavating for the rail line under the GO tracks just west of Port Credit Station. The goal is to successfully create a throughway for the LRT without disturbing GO Transit.

Construction was finally able to start in March 2020, after the negotiations between the Province and City.

Battling the pandemic, supply chain issues and construction on one of Mississauga’s busiest roads, Metrolinx believes its still on track for a 2024 completion.

According to the transit agency, there are between 150 and 400 people working on the LRT night and day. The latest completion update explains the relocation of watermains and storm sewer lines along the route are being finalized.

Over the next two years Hurontario Street will see closures, with Mobilinx attempting to reduce headaches for drivers. Currently, a portion from Queensway East to Dundas Street East is closed overnight until March 6.

Meanwhile, Ford’s off-the-cuff commitment to restore the downtown loop was welcome news for local stakeholders, as he handed out a giant gift ahead of the June election in vote-rich Mississauga, where his PCs currently hold all six provincial seats.

In a city that has proven it can go either blue or red, it could be the difference between slipping to a minority government, or holding onto another majority.