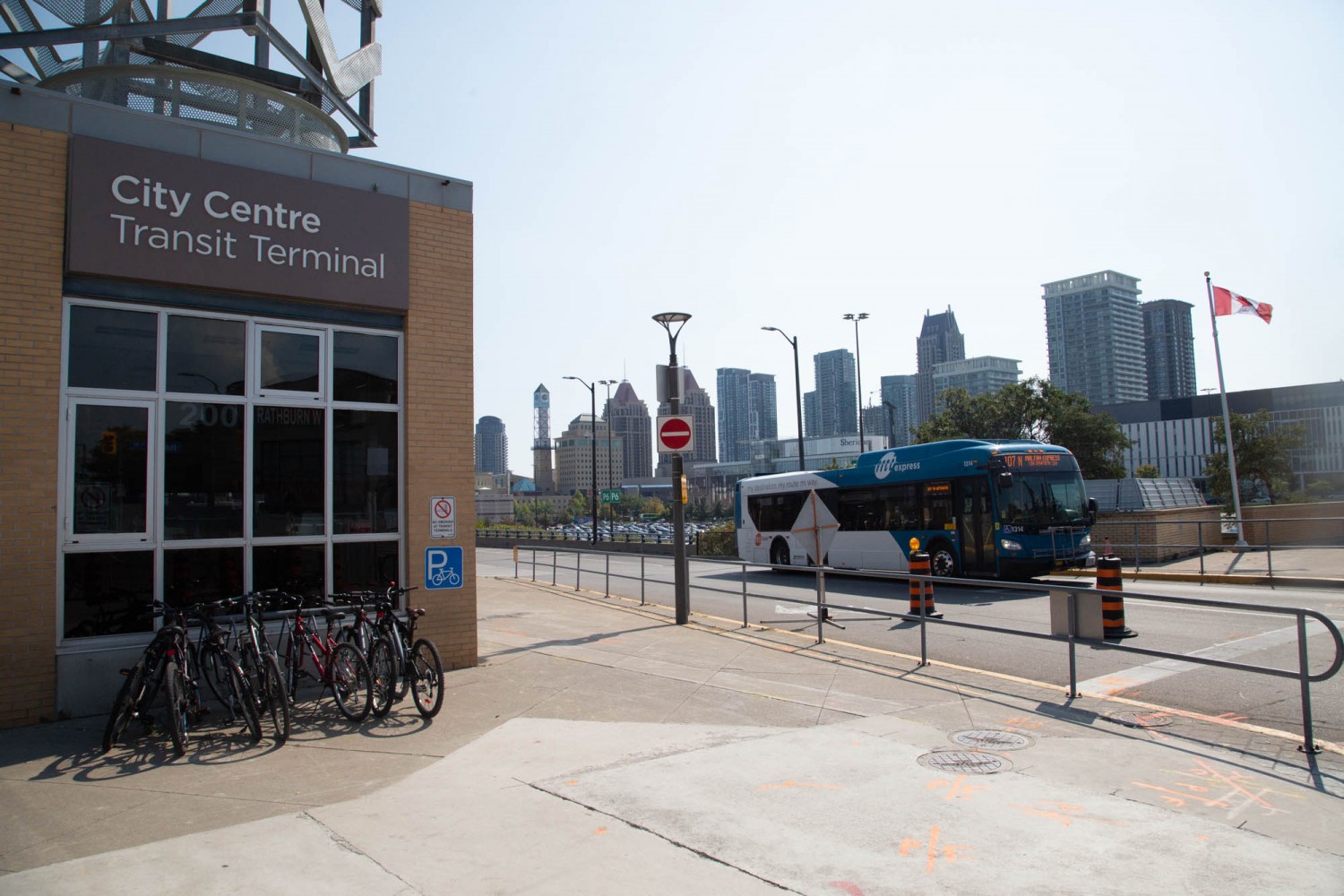 Hurontario LRT moving ahead, though two years behind schedule

While everyone was busy watching the election, the Ontario government awarded a $4.6-billion contract to the Mobilinx consortium for the Hurontario LRT. The group, identified as the preferred option in August, has been tasked with delivering the much-awaited route, which will now be nearly six kilometres shorter and two years later than originally planned.

Slipping the announcement to the public without much ceremony, Infrastructure Ontario offered a new delivery date of 2024. The day before the election, according to a cached version of the Metrolinx website, the project was due to be completed by 2022. The route is also still missing a 2.4-kilometre downtown loop and a 3.4-kilometre extension along Main Street into Brampton, both present in the original plan. 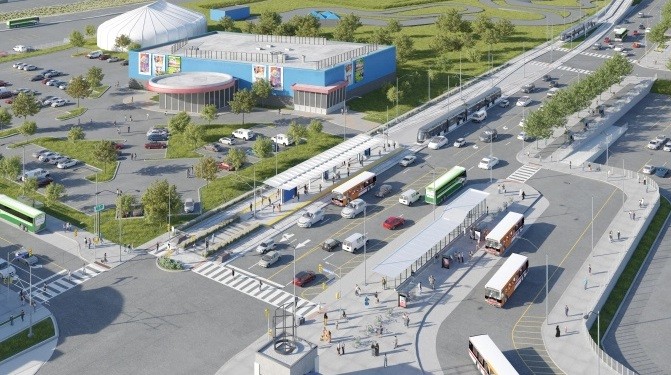 A rendering of the future Hurontario LRT

The contract is a public-private partnership that will see Mobilinx design, construct and run the project over 30 years, though it will be publicly owned throughout. Confirmation of the deal — and with it construction — is undoubtedly good news for Mississauga as its light-rail system moves closer to reality. However, it adds pressure too.

In March, Metrolinx axed the route’s three-stop downtown loop. Since then, particularly during the federal election campaign, Mayor Bonnie Crombie and her council have advocated for the loop’s return. Crombie in particular hoped to see the section of light rail federally funded to the tune of around $200 million.

“It’s still certainly a priority; we would like to do that [re-add the loop],” Stephen Dasko told The Pointer on Wednesday. The councillor was acting mayor, with Crombie absent from council. “It is nice to see we are moving forward and that the commitment is there from the Ontario government, but at the same time we have the belief — speaking for myself as councillor for Ward 1 — that the downtown loop must be factored in.” 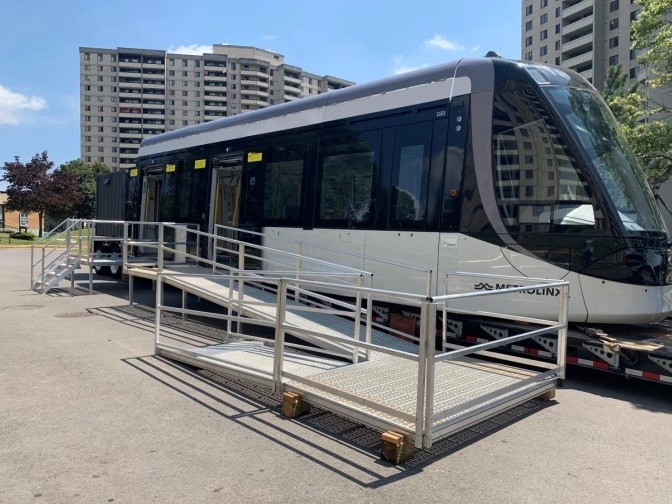 A protoype of a Hurontario LRT vehice, on display at Square One Shopping Centre in August

Crombie responded to questions through her communications supervisor, Nicole McInerney, saying that the route would be built to allow the loop’s addition at a later date. “The downtown loop was removed due to budgetary pressures as the cost of the project exceeded the funding envelope committed to by the previous provincial government,” McInerney said in an email. “From an engineering perspective, design work has been done to ensure the loop can be built and added at a later date.

“We continue [to] engage in discussions with the provincial government about the loop, including as recently as August at the AMO [Association of Municipalities Ontario] conference. The LRT remains one of Metrolinx’s most important projects and will transform Mississauga today while helping us manage future growth from the waterfront to our border with Brampton,” she added.

McInerney also confirmed that the city approached the federal government in March for additional funding, but current payment structures made it impossible. She explained that the Investing in Canada Infrastructure Program is providing money based on a 40 percent federal, 33 percent provincial and 27 percent municipal split. In order for the federal government to add more money for the loop, the feds and province would be required to sit down together again. 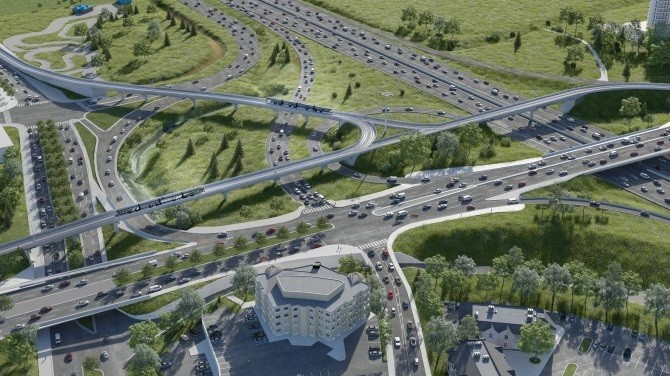 A rendering of the LRT, set to be operational by 2024

A parallel announcement by Hitachi, one of the companies involved in the Hurontario LRT, cast light on a lesser-known element of the route that offers a glimmer of hope to Brampton. In a list of the responsibilities it will undertake, Hitachi said one of the route’s 19 stations would be underground. The news backs up a 2017 tweet by the late Jim Tovey, a former councillor who said the Port Credit LRT station would be built underground.

Brampton, which saw its portion of the LRT largely cancelled under the last council, may take heart from this. Where the project was originally meant to go up Hurontario and continue along Main Street, Brampton’s previous administration blocked the proposal in favour of considering alternative routes, such as Kennedy Road. However, choosing not to wait, the province cancelled the Main Street portion altogether, taking funding off the table and terminating the route at Brampton Gateway Terminal and Steeles instead.

Almost immediately after their election last year, Mayor Patrick Brown and his council voted to make the original Main Street plan the preferred choice once again. However, disagreement has continued, with Brown favouring a far more expensive tunnelled option over a surface-level LRT. The existence of an underground station on the route to Port Credit could be good news for Brampton’s tunnelling dreams, previously dismissed by many as unworkable and too expensive. However, imminent construction means time may be running out.

The contract awarded to Mobilinx will see a number of different companies get involved. Transdev, which is helping to deliver Edmonton’s LRT system, will play a major role.

Infrastructure Ontario confirmed that Trillium Transit Partners — including the transit operator Keolis, which delivered an LRT in the Region of Waterloo — bid for the contract unsuccessfully. 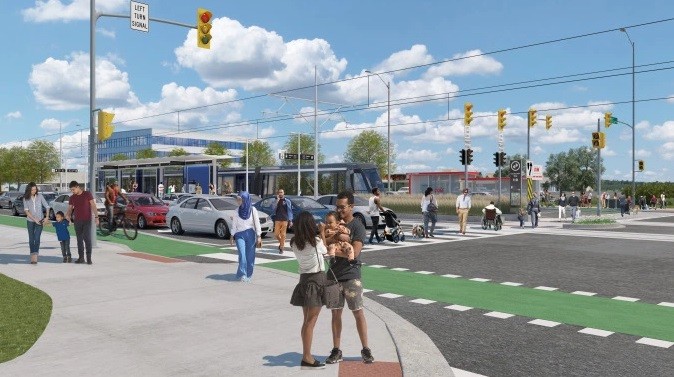 “Major construction” on the Hurontario LRT is scheduled to begin in early 2020. Minor work is already underway, as crews move gas pipes and other city infrastructure to prepare for the project. The project will also add a shared path for active commuters alongside the LRT from Port Credit to Queensway before a dedicated bicycle lane takes over between Queensway and Steeles in Brampton.

The LRT will occupy two lanes north of the Queensway toward Brampton, while Hurontario will be widened to the south to keep traffic flowing. A separate bridge will be constructed over the next four years to take commuters across Highway 401, before the system returns to street level.

The contract awarded to the Mobilinx consortium also includes the creation of a storage and maintenance facility located near Highway 407.