The seventh request for a Minister’s Zoning Order in three months sailed through Brampton City Council last week with almost no debate. The request could spring an entire subdivision in the Heritage Heights area of the city, one of Brampton’s last remaining unbuilt spaces.

If granted, a Minister’s Zoning Order, or MZO, would allow developers to bypass the traditional public planning process. Instead of engaging in protracted negotiations with residents and City staffers, builders will be able to proceed to get shovels in the ground almost immediately.

The provincial government, under Doug Ford’s leadership, and the City of Brampton, under Patrick Brown, have gleefully pushed through a series of MZOs. The argument from both has been a need to rapidly increase the housing supply, while critics call them gifts to politically powerful developers.

The flow of MZOs, which has peaked in Brampton during the fall, could continue.

“The Premier and the Municipal Affairs Minister have publicly indicated, including in the Legislature, that the government plans to continue to use Minister’s Zoning Orders to achieve development aims,” Ontario Auditor General Bonnie Lysyk wrote in a report last week that slammed the widespread use of MZOs in Ontario under the PC government. She was particularly critical of the government’s failure to consult residents on planning decisions that could have massive impacts on the lives of residents, and the environment. 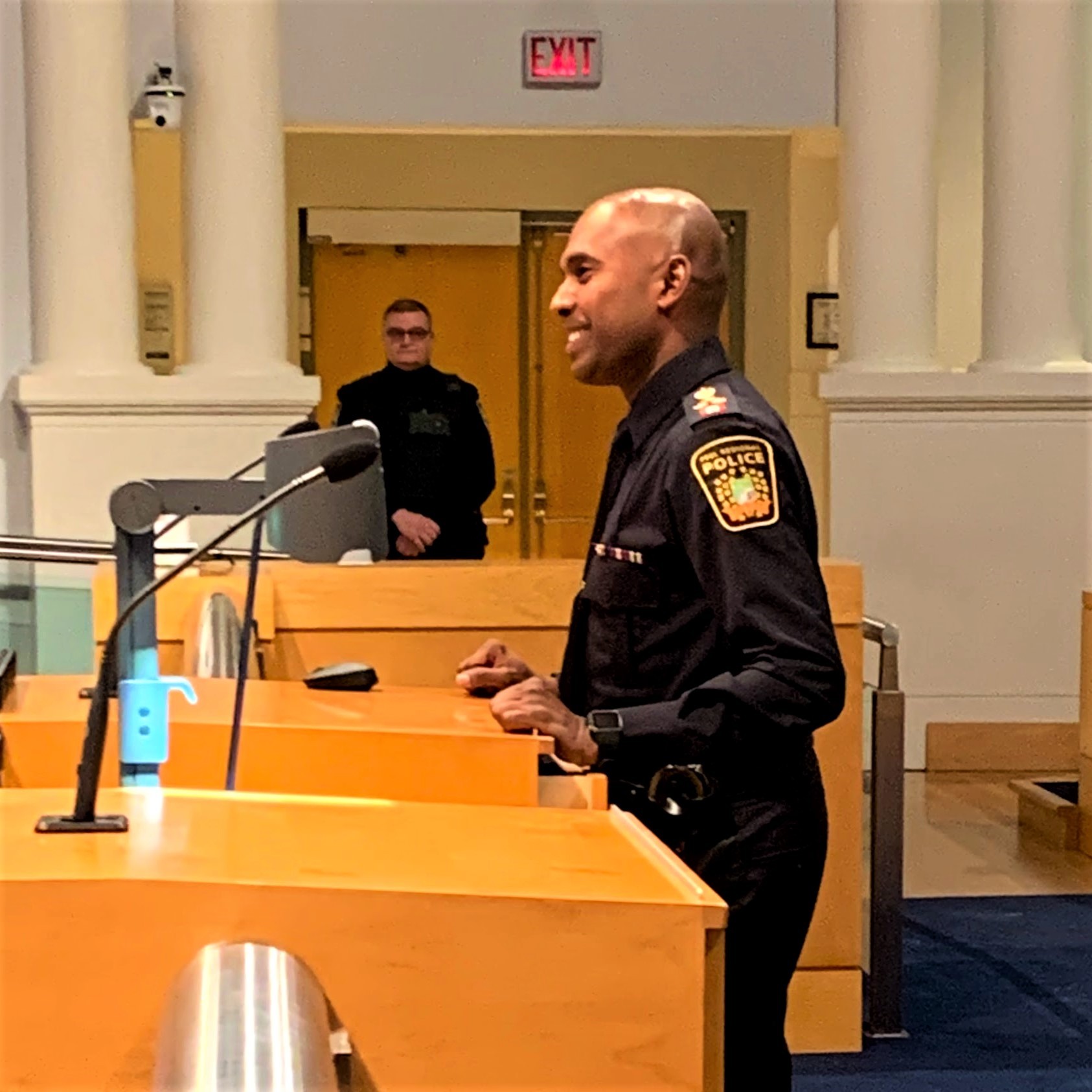 The Province has already approved one of Brampton’s MZO requests, a motion moved on September 29 for a subdivision to be built on a golf course, in an area that has some floodplain designations.

Brampton’s latest MZO request, approved unanimously by council on November 24, is something of a trojan horse.

Argo TFP, a Burlington-based developer that is also involved with Mississauga’s Lakeview Village project, sent a lengthy letter to Brampton councillors asking for an MZO to provide space for a new physical footprint for the Peel Regional Police.

“For over a year, Argo TFP has been working together with Brampton Planning staff on the development of a subdivision plan and associated planning for the subject lands,” the letter says. “In the course of this work, Argo TFP have become aware of the efforts of the Peel Regional Police to identify and secure a site for a new Divisional Headquarters in northwest Brampton.”

The developer’s letter links the development of the full subdivision in greenfield land to the delivery of a new Peel Police division. It says the progress of its full project is key to making the new police division a reality. 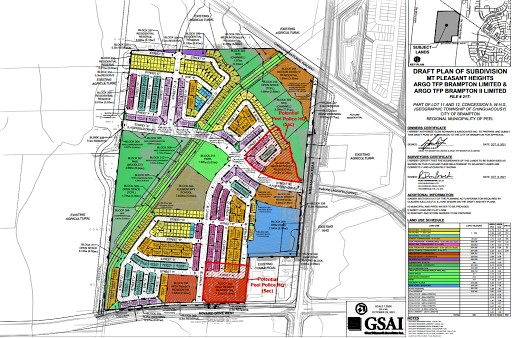 A map of the proposed development, including two potential sites for the Peel Regional Police.

(Image from GSAI/Argo/City of Brampton)

The space required for a divisional headquarters is listed as five acres, compared to a total subdivision that will spread out over 139 acres. The two spaces earmarked as potential spaces for the Peel Regional Police are in the southeast of the development, bordering Mississauga Road, a stone’s throw from existing and developing communities on the other side of the road and CN railway tracks. The police building, which developers are using to justify the request for an MZO, would be less than four percent of the entire site.

The developer has not “settled conclusively on the most appropriate site for the police” and has sketched two potential locations.

In total, the planning report anticipates 1,550 units will be built if the MZO is approved. Roughly 10 percent will be sprawling detached family homes, with around 45 percent set to be townhouses.

“I can verify that I got called by the Chief of Police and the Chair of Peel Region expressing their wishes here for this location for the police station,” Brown said during the brief discussion that led to Brampton council approving the developer’s request for an MZO.

Both the Region of Peel’s Chair, Nando Iannicca, and Peel Police Chief Nishan Duraiappah confirmed their support for the site. They distanced themselves from the request for an MZO.

“The Chief expressed his support for the location but he did not discuss or express support for the Minister’s Zoning Order with Mayor Brown or any other government officials,” a spokesperson for Duraiappah told The Pointer. “PRP is not involved in the MZO decision process.”

Iannicca said he was unaware of the push for an MZO.

He said he had “never, from anyone involved in the conversation at any point in time” discussed a request to rush the development through by using an MZO. He said the availability of the land was first mentioned to him by the local councillor, Michael Palleschi, who also moved the motion at Brampton council asking for the MZO.

It’s unclear why Iannicca recently endorsed a planning position on a potentially controversial development application in Caledon and now is being named by Brown as a supporter of the Brampton plan for the police division.

His position as Regional Chair is supposed to amplify and support the will of Council, and is intended to advocate on behalf of decisions made by the majority of its elected members. Iannicca is not elected by Peel voters and generally needs Council approval to use his position when taking a stance on public issues under his role. 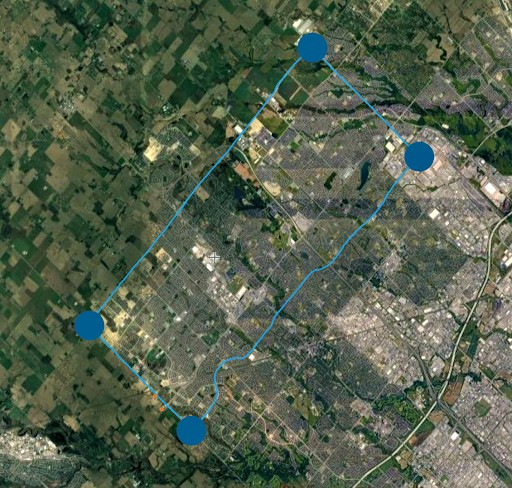 A map of the search area Peel Police is considering for its new facility. Two small orange dots (bottom, left) show where Argo is proposing to host the force.

The location, endorsed by Duraiappah and Iannicca, falls just outside the force’s official search area. “The preferred search area for an approximately five acre site is within the area of Williams Parkway to Mayfield Road, and Mississauga Road to Airport Road,” a police spokesperson said. “We remain confident that an appropriate site will be located and acquired so that Peel Regional Police can continue providing exceptional service to the residents of Peel.”

The urgency of the Peel Regional Police’s property search is the key thrust of Argo’s request for an MZO, which is now being considered by Queen’s Park. The developer’s letter says the police want to establish and open their new divisional facility “within 48 months”, the lower end of Peel’s estimates, but the PRP spokesperson said the timeline was four to five years.

“The Region of Peel and Peel Regional Police are committed to sharing details of any potential new site and associated development plans with the public, but will only be in a position to do so once an agreement has been reached with a vendor and the closing of the transaction has been finalized,” Peel Police said.

Argo is not specific in how much an MZO would speed up the delivery of a police station, or why its entire subdivision needs to proceed under the provincial planning mechanism instead of using the usual local public planning process. The letter simply says it is “unlikely” normal timelines would see the building constructed in time, adding a general line about the need to increase Brampton’s housing supply.

Critics of the cozy relationship between the Doug Ford PC government and the subdivision development industry have pointed out that MZOs are now being used to subvert the local planning process, which is intended to engage the public and ensure adherence to a range of mandated environmental and other land-use safeguards.

An MZO acts as a rubber stamp and circumvents the system of checks and balances.

“Railroading [applications] through and having no public consultation, no ability to appeal… It’s not a secret that developers wield a lot of power in municipalities that they support.”

Brooks said that many of the MZO requests in the last couple of years claim there is a public need, such as affordable housing, when really it’s about maximizing return on the investment in land that’s been assembled for residential/commercial development.

Part of the subdivision is also within the study area for the Province’s proposed Highway 413. Lands along potential highway routes are generally frozen from development as studies are completed and decisions made around the precise route and size of the road. 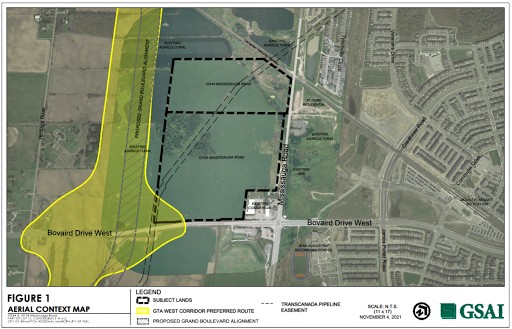 The proposed route of Highway 413 touches the subdivision in its bottom corner.

(Image from GSAI/Argo/City of Brampton)

Ontario will need to explain how its highway will protect the sensitive species to have control returned. If it fails to do so, or if other issues are found, pertaining to federal legislation, Ottawa will take over the environmental assessment process, with the ability to scrap the project if it sees fit.

The Argo MZO is the second such zoning request Brampton has sent that falls within the study area for the highway. A request to build a corporate headquarters in Brampton, also on the proposed route of Highway 413, was approved by council and sent to the Province in October.

The final decision on Brampton’s six outstanding MZO requests will be made by Steve Clark, the Minister of Municipal Affairs and Housing.