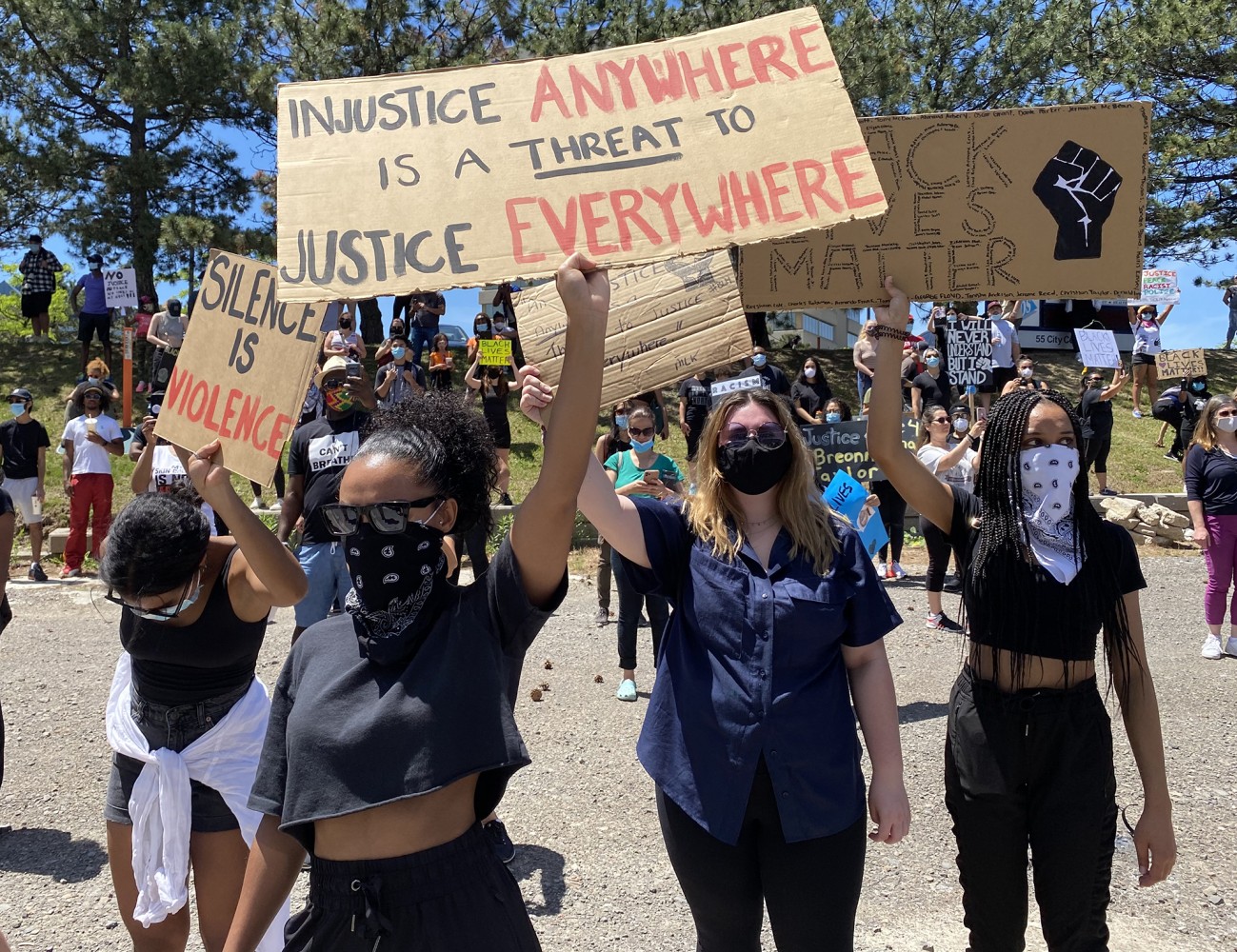 The Peel Police Services Board has refused to take the word of an expert tasked with advising the police on eliminating systemic racism within the force, and ignored the voices of community members calling for the creation of an anti-Black racism committee to help turn around decades of mistrust.

Instead, board members decided to create a diversity and inclusion (D&I) committee at the recommendation of executive director Robert Serpe, despite Akwasi Owusu-Bempah, a University of Toronto sociology professor who has done extensive research on the intersection of race, crime and criminal justice, telling them such a broad committee would not meet the needs of Peel’s diverse Black communities which have historically  suffered disproportionately because of Peel Police’s long-standing problems with anti-Black racism.

“When diversity committees, writ-large, are struck, the views, interests, concerns and issues related to various groups that come under the umbrella of diversity, often get lost,” Owusu-Bempah, told the board in September. The board was discussing a report from Serpe, which recommended the formation of a D&I committee, instead of the proposed anti-Black racism committee recommended by community activist David Bosveld who made the initial recommendation in April. “It is African-Canadians, Black Canadians, who are particularly overrepresented and have particular needs, not only within policing, but in society more generally. When the issues facing Black people are subsumed under diversity, which includes sexual orientation, race and ethnicity, because those two things are distinct, then those concerns do often get lost,” the professor, who has been hired by PRP, advised its members.

Following his statements, the board decided to delay any decision and pushed the item to its October 22 meeting to give Serpe time to come back with more details to support his position that a specific anti-Black racism committee is not needed, which community members labelled as “naive”. Serpe was also tasked with gathering more information about the Toronto Police Services Board Anti-Racism Advisory Panel which provides guidance to the board on a number of issues, including anti-Black racism, and anti-Indigenous discrimination, and recommends policies or strategies to the board to solve these problems.

Serpe has no experience in policing or equity/inclusion work. He was a communications staffer who worked for former Brampton mayor Susan Fennell when she also sat on the Peel Police board, and after he left her office he was later given the top position in the board’s administration.

It’s unclear why he was given the responsibility of providing a recommendation on how to best address problems around police discrimination and the lack of visible minority representation within the force, especially after professor Owusu-Bempah, hired by the Peel Regional Police, provided his educated guidance to the board.

The policing expert has three degrees including a masters and doctorate from the University of Toronto, holds “Affiliate Scientist status at the Centre for Addiction and Mental Health” and has authored dozens of research papers, book chapters and articles on everything from “Justice Statistics by Race” to “Police Stop and Search Practices in Canada”.

But the board ignored his advice in favour of Serpe’s.

At the October 22 meeting, Bosveld once again advocated for board members to change their minds.

“I would like to remind the board that it is Black communities in Peel specifically that experience negative interactions with the police in an extreme and disproportionate manner,” he said. “It is the Black community that is specifically requesting an anti-Black racism advisory panel”.

Recent data from the PRP show that in 2020, officers used force — which along with using physical force, includes drawing or pointing any type of weapon — in 1,092 incidents. In cases where officers were able to determine the person's race, 35 percent of those individuals were Black, despite Black people accounting for only 9 percent of the population.

They were represented in Peel Police’s use-of-force data at a rate more than three times higher compared to white residents.

As Black residents continue to be subjected to unfair treatment, following decades of carding that targeted them in random police stops also at more than three times the rate compared to whites, many are calling on police to finally find immediate solutions to prevent further harm to the community.

“D&I (Diversity and Inclusion) is not comparable to anti-racism work and will not be impactful,” Bosveld told the board. “They are not built specifically to advise on issues of anti-Black racism and policing.”

Bosveld pointed out that the board is choosing to ignore the advice of an expert hired by PRP to advise on these very matters.

“Refusing to take this advice into consideration can not be viewed as a mistake, but as intentional ignorance to the nuance and importance of anti-racism work,” Bosveld said. “It’s like creating an all-lives matter panel when what is necessary here is a Black Lives Matter panel.” 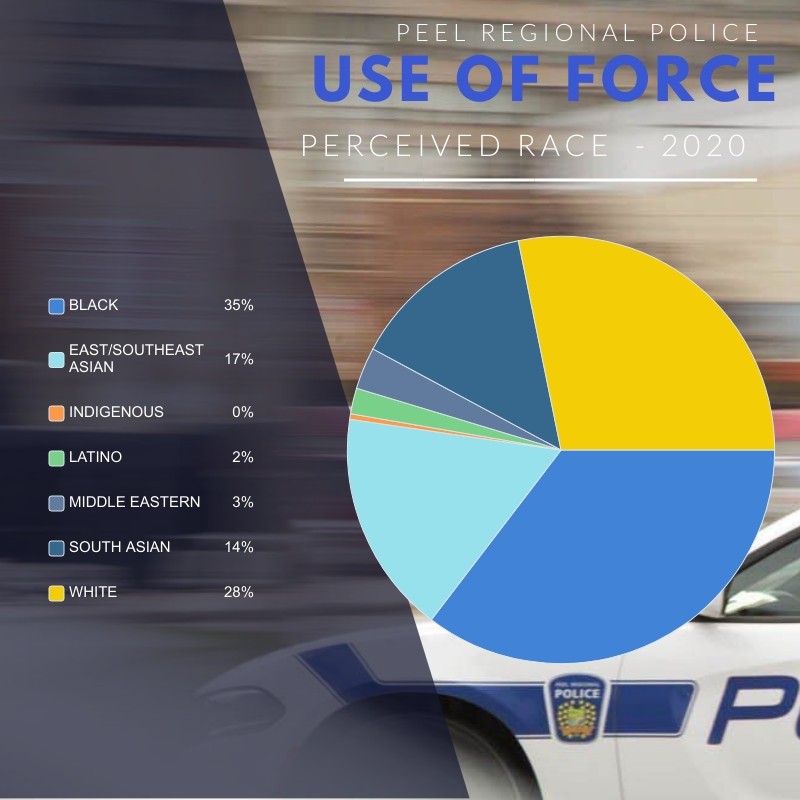 Use of force data from the Peel Regional Police shows the Black populations being disproportionately impacted by these potential harmful events.

Both Mississauga Mayor Bonnie Crombie, and Councillor Martin Medeiros, who sit on the board, agreed with Bosveld.

“I’m moved by some of the comments by the delegation, as much as some of it is hard, tough language. Truth be told, there are some points that are extremely important, and it’s always a challenge of who am I to deny someone in a community group who feels they have not been engaged in the proper manner?” Medeiros said.

“There is a strong argument for prioritizing anti-Black racism and creating its own committee on an equity basis,” said Mayor Crombie, who added she has her own committee that advises her on these issues at the City of Mississauga and feels well served by it. It does not deal with complex policing policies.

Despite their words, Medeiros and Crombie contradicted their claims and voted in favour of the diversity and inclusion committee’s creation, instead of an anti-Black racism body.

Both politicians feared that the creation of an advisory committee to specifically deal with ABR, would lead to the need for further committees to deal with the issues impacting other specific demographics, like anti-Asian racism, or anti-South Asian racism.

“Realistically, we can’t create four, five, six, or seven boards, technically it’s not sound,” Medeiros said. “Creating this board, it’s an opportunity for us to bring those perspectives together,” he added, despite hearing advice from Owusu-Bempah who told the board this method is often not effective and competing voices routinely get lost.

The argument also displays a level of ignorance toward the issues of anti-racism against not only the Black community, but others as well.

The data clearly signals a direct need for dedicated action to address the issues facing the various Black communities. These residents were involved in double the amount of use of force incidents compared to the Asian and South Asian populations in Mississauga and Brampton. If specific issues relating to anti-Asian racism or Peel’s South Asian community were to arise, would it not be prudent for the board that governs Peel Regional Police to have specific avenues to deal with those problems as well?

A request for comment sent to Serpe about the work he did to inform his report, as well as whether Owusu-Bempah’s statements were taken into consideration in his subsequent report, was not returned ahead of publication.

Serpe informed the board that some of the issues raised by Bosveld as it relates to racial profiling and systemic discrimination would be addressed by the committee that is forming as part of the partnership between the Peel Regional Police and the Ontario Human Rights Commission (OHRC).

However, this panel would be set up to advise the PRP organization, not the board, which serves in a governance role for the force but is separate from it.

PRP’s committee is also running into issues after one member resigned due to the actions of officers involved, stating the organization “consistently demonstrated its lack of respect for the community it serves.”

The partnership with the OHRC came after years of criticism dogged a police force that does not reflect the community it serves. Based on the 2016 Census, 65 percent of Brampton and Mississauga’s residents were visible minorities and half the population was female. In 2020, there were 2,236 uniformed officers employed by Peel Police; 78.9 percent were men. Visible minorities comprised only 27.9 percent of the force, while 1.1 percent were Indigenous. People with disabilities made up 0.2 percent of PRP. The recent hiring pool, which was one of the force’s most diverse in years, signals that small changes could be starting to happen.

The terms of reference and the composition of the OHRC commission have yet to be released, drawing criticism from community members who have been waiting for a year to get details of what the partnership will look like.

In a recent editorial published in the National Post, Peel police services board chair Ahmad Attia stated the force is undergoing “dramatic and multi-faced changes” and praised the board’s decision to form the D&I committee, claiming it was a key component of addressing systemic racism within the PRP organization — once again ignoring the statements of Black community members in Peel and experts.

“Maintaining the status quo when it comes to policing is not in anyone’s best interest. In fact, everyone has accepted the challenge of doing things differently and better in order for us to continue the pursuit of providing the best quality policing possible,” he wrote. “This is what the residents of the Regional Municipality of Peel expect and deserve. When it comes to the rest of the country, demonstrating that systematic racism can be addressed head-on will only serve to encourage others to do the same.”