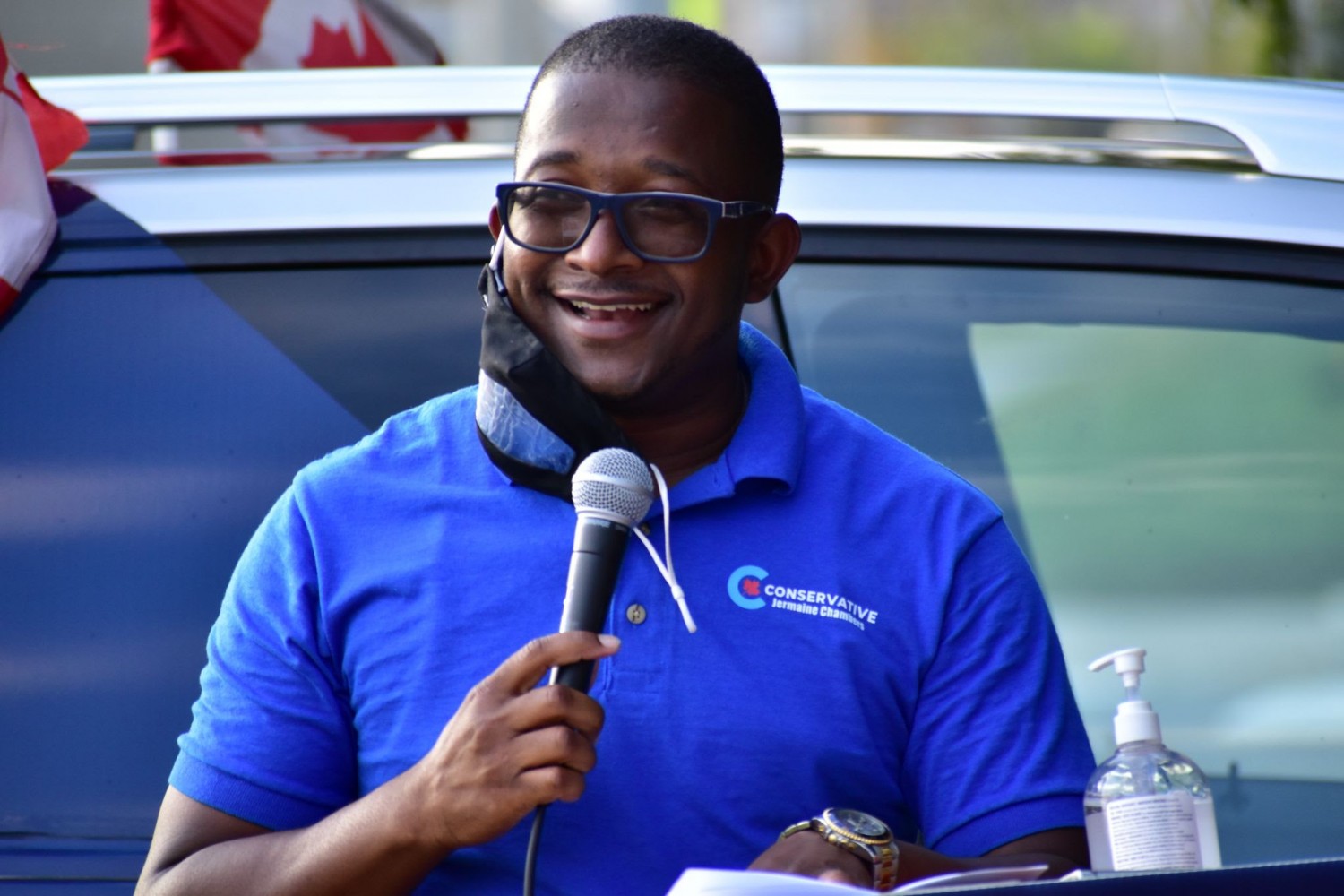 Conservative candidate Jermaine Chambers promises to work with Province, City to get Brampton its fair share

Jermaine Chambers decided he wanted to become a “servant of the people” years ago. So far, it has been a case of always the candidate, never the politician.

The financial advisor ran provincially as the Progressive Conservative candidate for Brampton West several years ago, losing to the eventual winner and member of provincial parliament, Amarjot Sandhu. He then unsuccessfully contested a place on Brampton City Council, failing to unseat Doug Whillans in Wards 2 and 6.

Now, he has won a federal nomination to represent the Conservative Party of Canada in Brampton West. The snap pandemic election has provided Chambers with an early chance to represent his community, an area he says he is desperate to give back to.

“I like to say there is one taxpayer,” he told The Pointer at his campaign launch, explaining why he has run for all three levels of government, each of which is equipped with different powers. “We don’t have a taxpayer at the municipal level, a different taxpayer at the provincial level and one at the federal level; at the end of the day, it’s one taxpayer.” 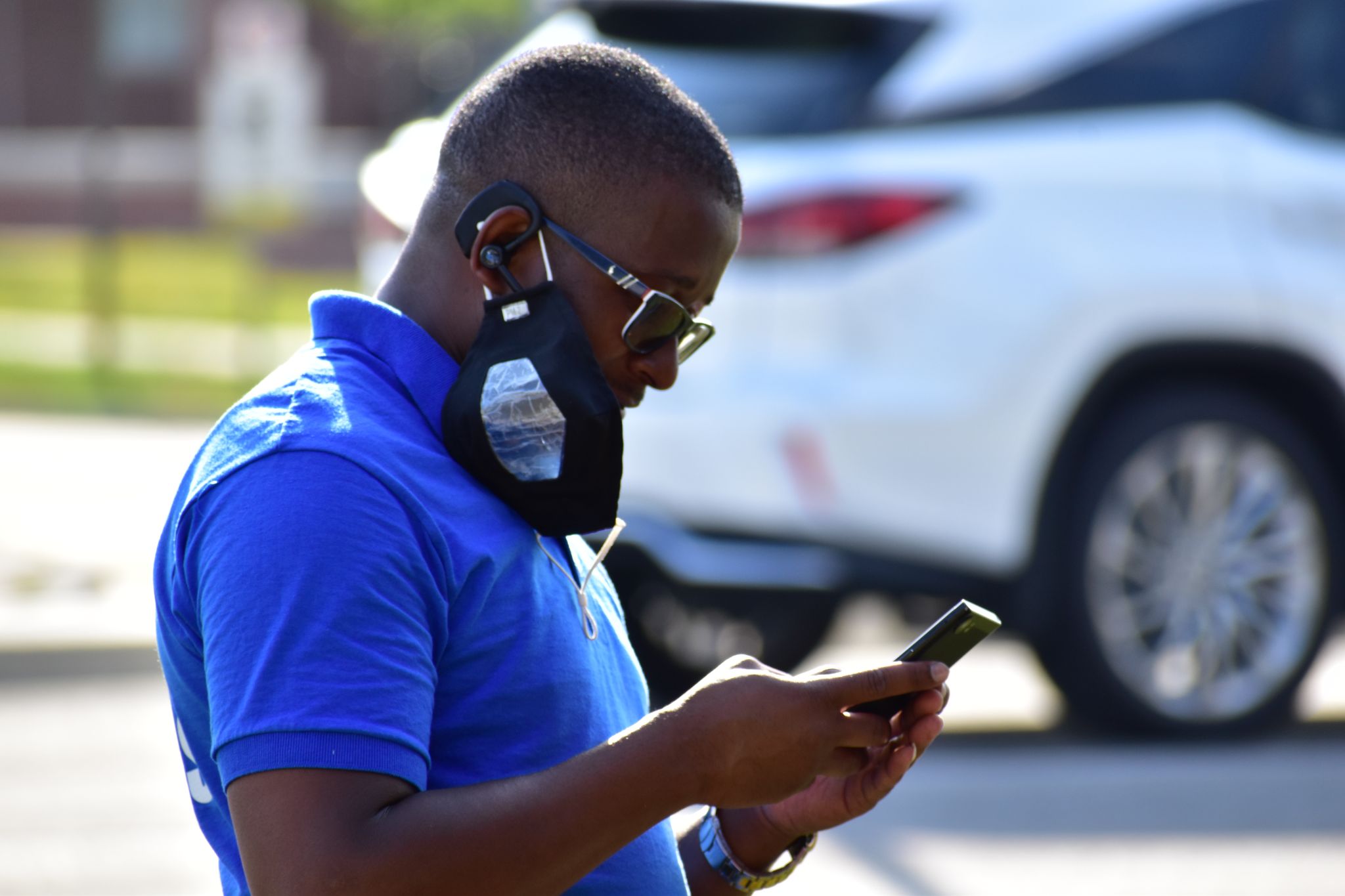 Jermaine Chambers checks his phone at his campaign launch.

Chambers believes his experience campaigning for different seats of power can help the residents of Brampton West if he is elected. As a former provincial and municipal hopeful, the Conservative candidate has an understanding of how different powers are distributed and has promised to make working together with various levels of government a key priority if he wins election September 20.

“We have auto insurance, for example, in Brampton which is one of the biggest issues,” he said. “There is room there for a member of parliament like myself when elected to collaborate and with my provincial partner to say [that] we need to work on these affordability issues for the people of Brampton. They can pass legislation [governing insurance], however, we have access to the competition bureau, for example, we can ask them to investigate [if] there [is] some collusion between the insurance companies that is driving up the cost of insurance here in Brampton West — what is that and how will we fix it? I believe it comes down to leadership.”

Sandhu, who faces reelection next June, appeared at Chambers’ campaign launch at the end of August to endorse the candidate and promise to work together with him. He had previously endorsed Chambers’ run to become a councillor. 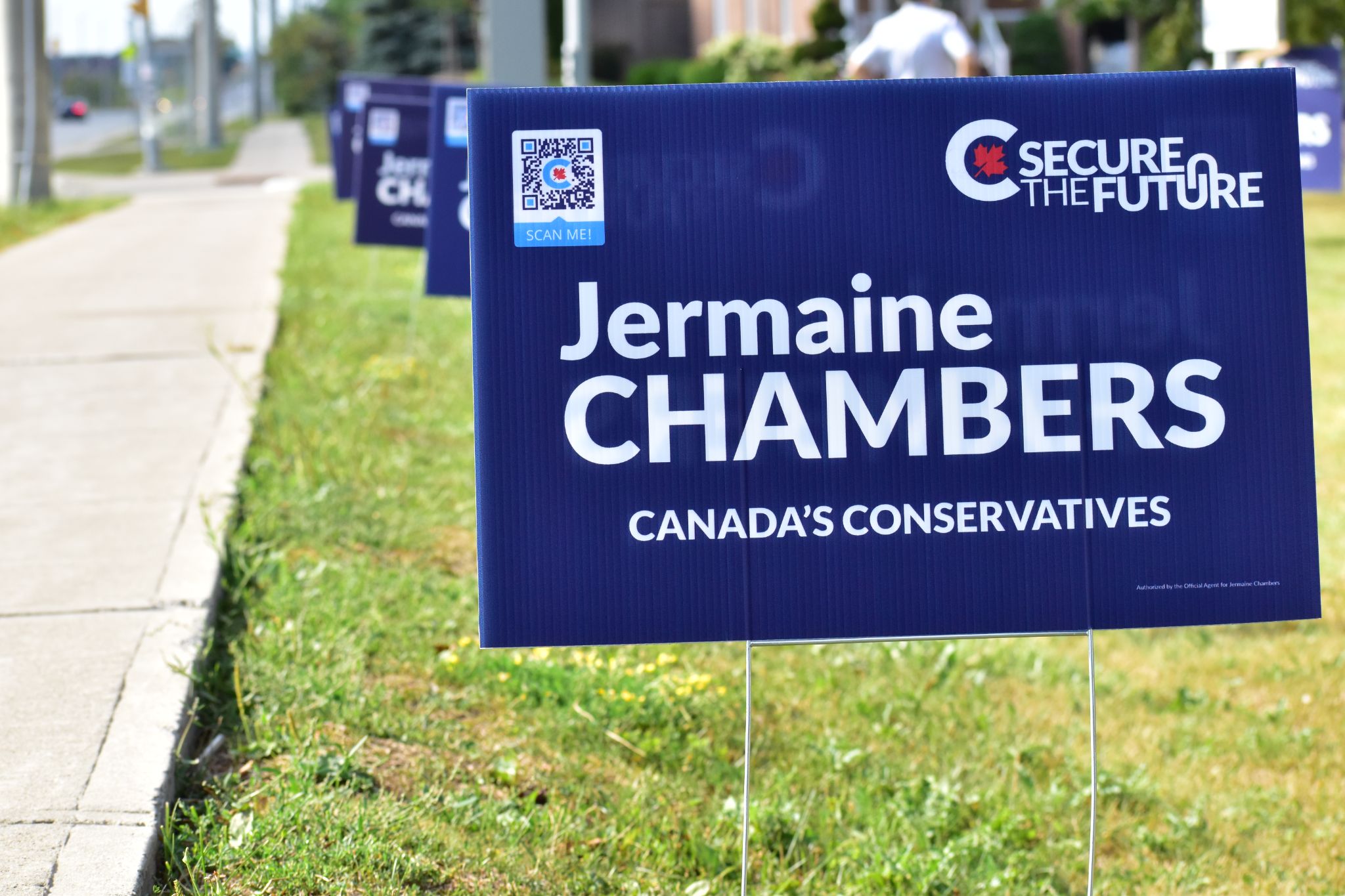 Before deciding to run for office, Chambers spent more than a decade working in the financial sector. He currently offers mortgages, advising families on the financing involved with purchasing a new home.

His undergraduate degree is in business management, while the candidate also has a license to operate as a mortgage agent. “That financial background, I think, is going to work wonders for the people of Brampton West,” he said.

The riding is being contested by Kamal Khera for the Liberal Party and Gurprit Gill for the NDP. Rahul Samuel is the People’s Party of Canada candidate.

Collaboration is a theme that runs through Chambers’ commitments. The candidate, who has been critical of Khera for losing her role as parliamentary secretary after travelling during the pandemic in violation of her government’s own guidance, argues that partnership is the key to delivering for voters. From transit funding to healthcare, bilateral work is at the heart of the Jermaine Chambers pitch.

Earlier this year, the provincial government announced a plan to expand Peel Memorial into a full-service hospital. The announcement, which was criticized for being misleading by opposition parties, promises Brampton a new 24/7 emergency wing at Peel Memorial that will bring 250 desperately needed in-patient beds, far below the 850 Brampton needs and what the City had officially called for. The provincial government had pledged more than 15 years ago to deliver two full-service hospitals to the city, and by the time Memorial is finally expanded to admit patients (it currently has no overnight beds and only a part-time urgent care ward) Brampton will need four full-service hospitals, not just two.

Basic healthcare access for Brampton residents has been a failure of leadership, Chambers said.

“We recently had an announcement [about Peel Memorial] from the Province, and the federal government was absent,” he said. “That’s what we need in Brampton, we need a federal partner, someone who is really going to advocate for the people of Brampton and you can count on me to be there for Brampton’s priorities.” 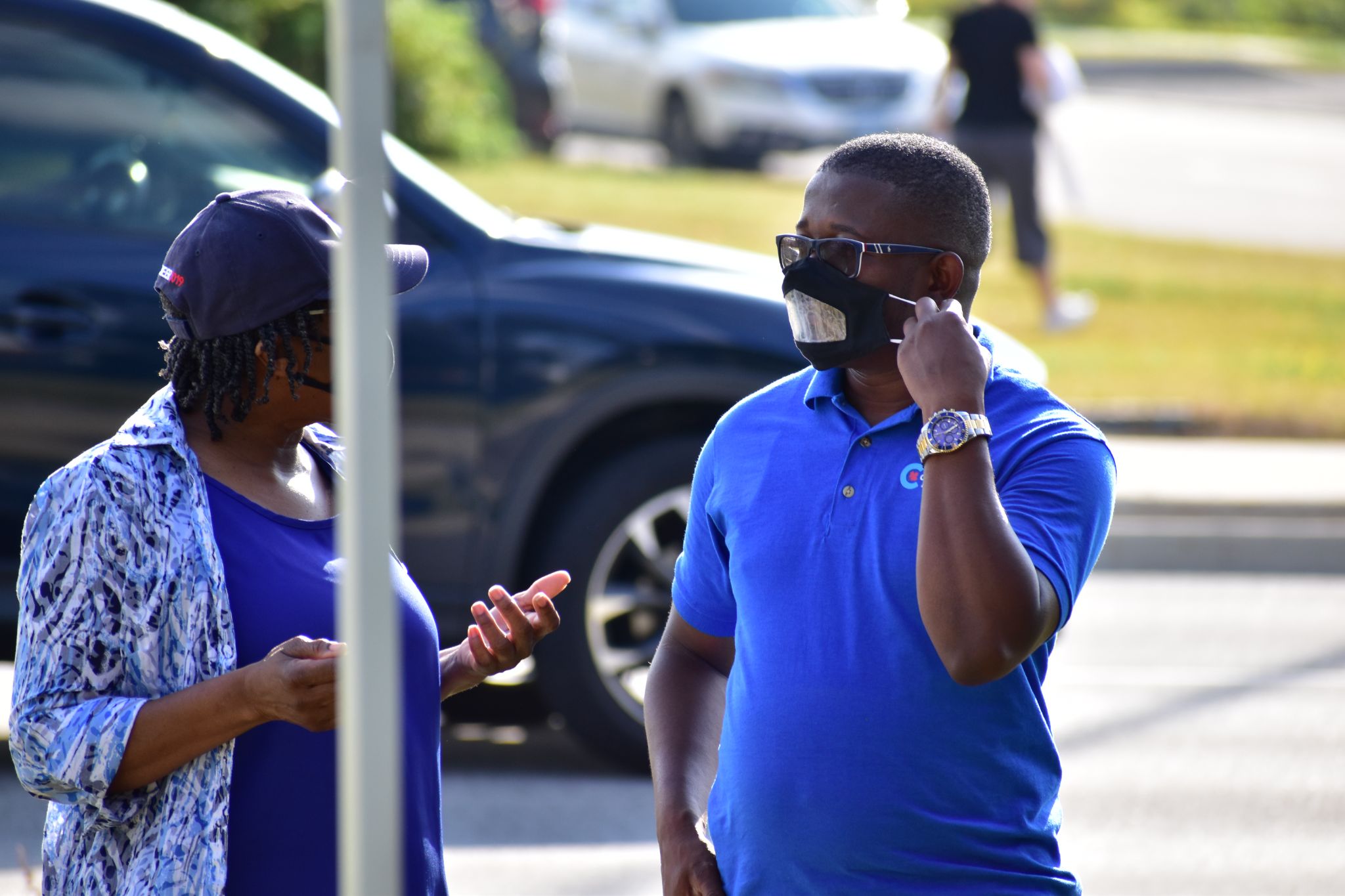 Chambers speaks to a supporter.

Chambers promises that his commitment to Brampton will go above even the party. Asked if he would vote against a Conservative line when legislation pushes against the unique interests of his riding — the city’s two PC members, Sandhu and Prabmeet Sarkaria, failed to push back against their party when it torpedoed an NDP motion for a second Brampton hospital, in a clear show of loyalty to their party ahead of the constituents who put them in office to represent their needs — Chambers said he did not think his Party would propose such legislation. If it happened he said he would consider opposing it.

“Erin O’Toole is on record as saying he is giving members of parliament free votes, except as it becomes [about] supplying confidence to the government,” Chambers said. “As a member of the team, you can’t vote to bring the government down and I would never do that. But my first priority is to the people of Brampton who elect me, if there is something that is coming forward, I think is going to negatively impact the people of Brampton West, my job is to speak up.”

O’Toole has previously said he encourages free votes on “matters of conscience” including assisted dying and abortion. The Pointer could not find reference to free votes on issues such as infrastructure funding or immigration, which are likely to directly impact Brampton West.

Looking at Brampton West specifically, Chambers says the general issue of affordability, particularly when it comes to housing, is top of mind for him.

“It’s affordability, it’s housing,” he said. “I am a mortgage agent and I finance so many mortgages for people, young people, who have moved out of Brampton because they can’t afford it.”