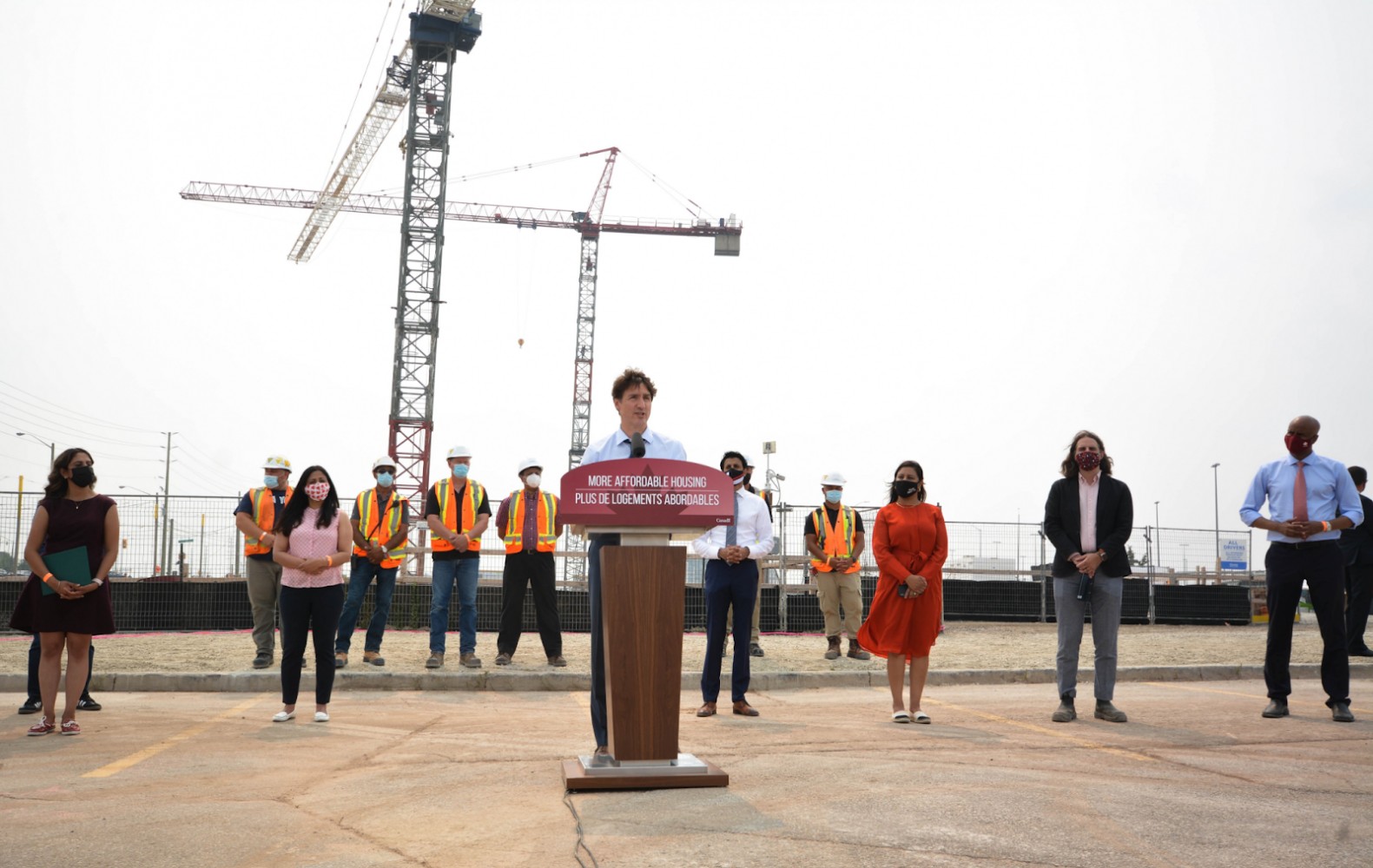 Correction: A previous version of this story stated the average rent in 2019 for Brampton West is $2,183. This figure actually refers to the threshold for rent considered affordable by the federal government's definition of affordable housing. The average rent for a 2-bedroom apartment in the Brampton West riding in 2019 was $1,447. The Pointer regrets the error.

Last week, Justin Trudeau stood in Brampton to announce a federal investment in a 26-storey apartment project. The media event led to a string of stories about 302 new affordable units being built in Peel to address the region’s chronic housing crisis.

It was another stop on the Liberal’s campaign-style summer spending spree across Canada, ahead of the fall election the Prime Minister seems primed to ask for.

Once the press release was out and the latest stop on the tour wrapped, the announcement hit the newspaper pages and smartphone screens that repeated what Trudeau had claimed, almost word for word.

It was a resounding success. The latest win in a region that came through for the party in a red crush that swamped the other parties two years ago. The Liberals easily won all eleven seats in Mississauga and Brampton. The latest news would hopefully go a long way to ensuring a repeat performance, should an election be called in the coming weeks.

But the central attraction of the announcement was not accurate. Trudeau made claims that are far from the truth. It was the type of tactic used during a heated campaign battle in a close contest.

Trudeau said during his Brampton stop to amplify the housing announcement that it was a big win for affordable housing in Peel. The federal government, he said, was helping to build 302 affordable rental units in the 26-storey residential tower being built right behind the podium from where he spoke.

The project will be funded through a $120 million loan from the Canada Mortgage and Housing Corporation’s (CMHC) Rental Construction Financing Initiative. The program is designed to lend the upfront cost of construction to developers and get rental housing projects off the ground quicker.

Eligible developments need to meet minimal affordability criteria. To qualify, projects must offer 20 percent of their units with rents below 30 percent of the area’s median total income and all rents must be 10 percent below the “gross achievable residential income”. Projects can also qualify if they have been approved under a specific affordable housing agreement.

“When we arrived in 2015, the federal government had removed itself entirely from the business of investing in housing and therefore we had some catching up to do,” Trudeau said, positioning his Party — and the local MPs gathered for the photo opportunity — as the solution.

The problem is, the 302 units blasted across the headlines may not all be affordable and those units that do meet affordability criteria could still be far out of reach for the Peel families in desperate need of assistance. 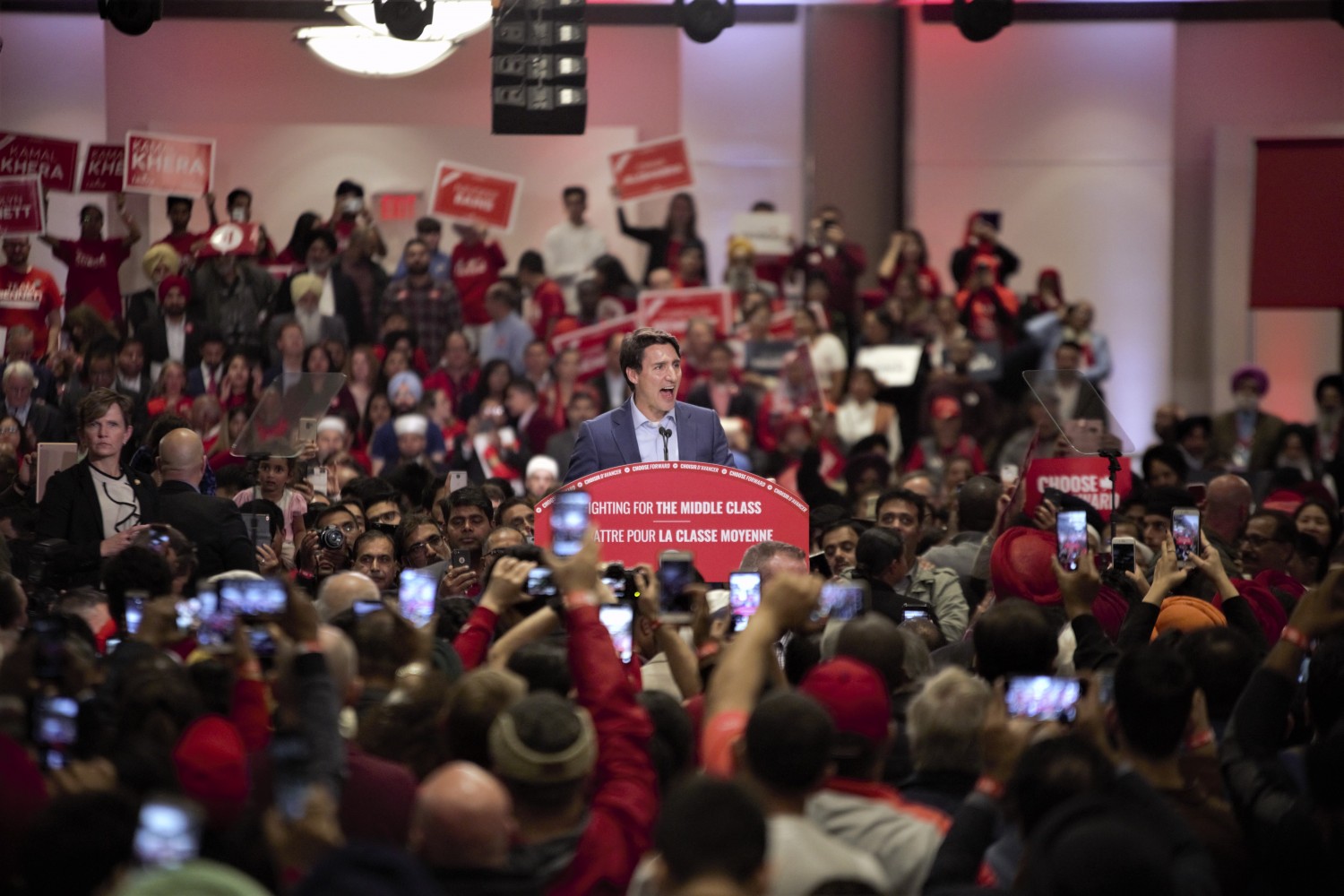 Peel Region is a popular spot for politicians on the campaign trail. Trudeau is pictured here in Mississauga in 2019.

An article by non-profit news organization Press Progress revealed just 72 of the 302 units proclaimed as affordable are guaranteed to fit the technical criteria.

“However, at the time of assessment over 90 percent of the units would be below the cap of 30 percent of median household income for the area,” the spokesperson added. “At the time of initial occupancy the effective rental income will be at least 10 percent less than the potential market rental income.”

That means the building will fit a range of affordability criteria, at a fixed time, but this is subject to change. Over a 21-year-period, only 72 of the 302 units are guaranteed to maintain rates that fit the official definition of affordability—the remaining units could (and probably will) see rental prices increase based on the assessed value in the area. Mount Pleasant, where the building is located, already has some of the highest real estate prices in Brampton, and the city has among the highest rental rates of any municipality in Canada.

All units in the building will initially go to the market at 10 percent below the rental rate for the area, but without any promises to remain that way. Current rental rates in Brampton are already far out of reach for those on Peel’s centralized wait list, and a report by the Region last year stated 80 percent of all Peel residents cannot currently afford the cost of housing in the region. Buildings built in Ontario after November 2018 are not subject to rent control.

Without rent increase controls, units could initially be listed 10 percent below market rates and rise above the cap within a few years. The assessment that 90 percent of units set to be completed would currently meet affordability criteria today already seems misleading, as a ten percent reduction, below the current market rate, would mean a rent of $1,582 in Mississauga for a one-bedroom apartment, and $1,428 in Brampton, according to the latest national figures from Rentals.ca for June. These figures could rise dramatically by the time units actually go to market in 2023.

This means, after tax, a single parent making the median individual income in Brampton would have about $7,000 left over, after rent and utilities, to cover all of their remaining costs for the entire year, under the criteria set for affordable rent, using the 10 percent below market rate condition.

The Prime Minister’s office said the details it published were accurate. “The news release actually contains the right info,” a spokesperson said. “302 refers to the total number of units.”

The optimistically framed announcement is a slap in the face for many in Peel, where the centralized housing waitlist exploded during the pandemic. Near the end of 2019, there were 14,997 households on the waitlist. By the end of 2020, the number ballooned to 22,445, a 50 percent increase in one year alone.

Was it all just an innocent slip of the tongue by the Prime Minister, during what appeared to be an election-style stop?

Trudeau is almost offended when reporters ask him if the grand promises currently being made across the country are little more than a signal for a snap poll. Skeptics just pointed out that he seemed to protest a little too vigorously when NDP Leader Jagmeet Singh asked the freshly appointed Governor General to deny any fall election request.

It was 2019 last time federal candidates went door-to-door for votes in Peel.

The Liberals had a poor track record, sending just $42.4 million to Brampton and $77.3 million to Mississauga through the Investing In Canada Plan since taking office in 2015. Edmonton received $1.9 billion over the same period. The party and its MPs made few specific pledges during the 2019 campaign. Two years later they look like they’re vote hunting once again. 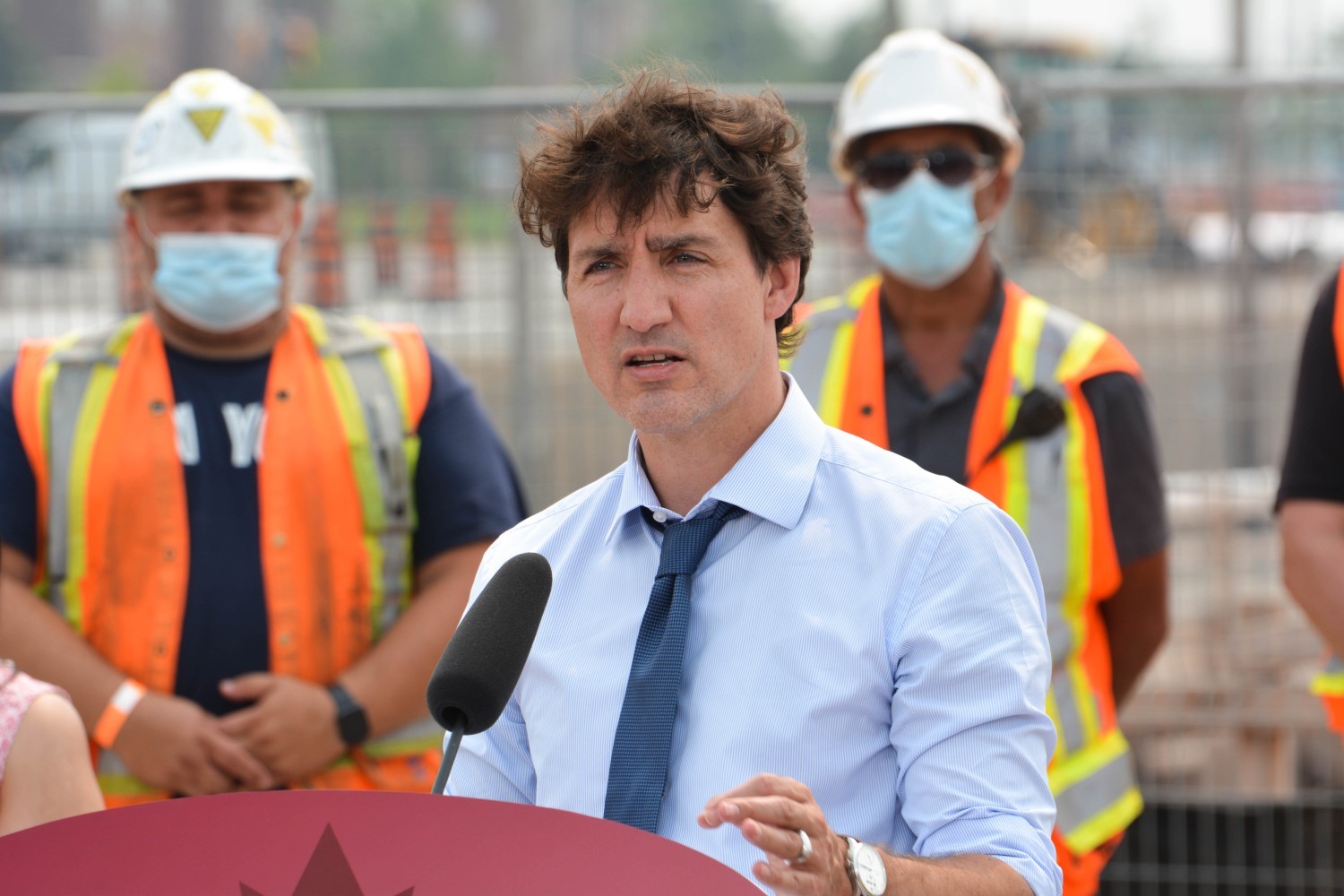 The region’s chronic housing problems are unique and require a tailored solution. A reliable guarantee of funds passed from Ottawa to Peel, similar to the model used to fund healthcare, could bring some stability to the booming area.

Asked if the federal government would take steps to create a specific housing strategy targeting Peel, which welcomes an outsized number of newcomers each year, Trudeau was non-committal.

“Over the years, different governments have co-opted the term ‘affordable’ and created their own notion of what they deem to be affordable that does not actually match affordability on the ground,” Kwan said.

When Trudeau visited Brampton, he failed to hide the fact 302 units, even if they are actually affordable, is a tiny contribution to the needs of a region where 80 percent of residents cannot afford housing. The revelation that just 24 percent of the units he heralded meet long-term affordable standards in a red-hot housing market makes the election-style claim ring more hollow still.

When the Liberals’ national housing strategy, A Place to Call Home, launched in 2017, advocates were concerned it would fall short. The $40 billion promise planned to create 100,000 new affordable housing units over a decade and help find homes for 530,000 households.

“The scale of programs could take a bite out of affordability problems, but won’t widen the options for people looking for an affordable place to live,” Greg Suttor, a lead researcher with the Wellesley Institute, stated shortly after the Liberal strategy was launched. The Prime Minister receives a tour of the construction site he claimed would host 302 affordable units.

The affordable housing claims were not the only shallow campaigning the Liberals pushed on Peel.

Last week, Omar Alghabra, Minister of Transportation and Mississauga Centre MP, appeared virtually at Mississauga Mayor Bonnie Crombie’s final weekly press conference of the summer. The MP grabbed his moment in the spotlight, appearing at a televised event specifically targeted at residents living in Mississauga and before the conference’s media questions rolled around, he was off.

Alghabra cancelled an eight minute interview with The Pointer in February, citing scheduling conflicts. His office ignored a request to rearrange. 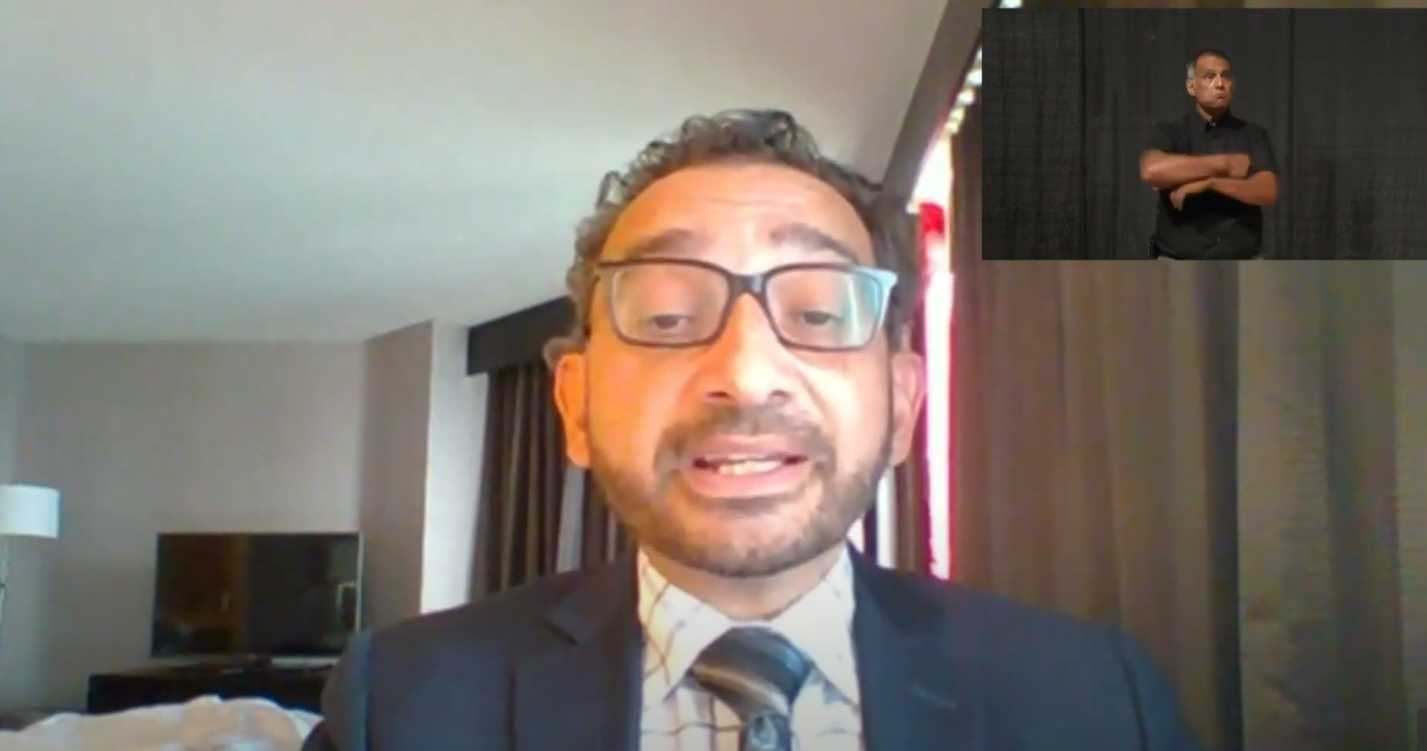 “Oh not at all, Minister Alghabra is a very dedicated member and unfortunately there are always benefits and costs when you have a minister representing your community because of course now they have a larger national role,” Crombie replied, when asked if the MP was taking Mississauga for granted. “And unfortunately, as you heard, he is travelling… he probably has many appointments and many engagements and [is] unable to take questions.”

Mississauga is also represented by Gagan Sikand, the Liberal MP for Streetsville, who has been absent from parliament since the end of October, 2020. His office has refused to divulge when he will return or explain his absence beyond a vague medical leave. The MP’s disappearance has left  more than 118,000 residents without direct representation in Ottawa.

Questions to Sikand’s office, the government whip and local riding association about whether or not Sikand plans to run again in the next election have gone unanswered.

The string of events suggest a party more interested  in preparing to campaign than governing. Jagmeet Singh, as mentioned, has already asked the Governor General to refuse an election request if Trudeau asks.

“With the COVID-19 pandemic still upon us, and with these important measures still before Parliament, New Democrats have urged the prime minister not to call a snap election,” he wrote.

Trudeau responded yesterday at a media event, suggesting the current parliament was gridlocked by politics.

As speculation about a federal election continues to mount, residents in Brampton and Mississauga are bracing for months of posturing and promises. Local leaders will be writing their wish lists and national strategists deciding what pledges resonate most in Peel’s vital 12 ridings.

Both cities have been burned in the past. Misleading promises, bags of cash and bright campaign buses have all visited before. It’s a trend that shows early signs of continuing in 2021.