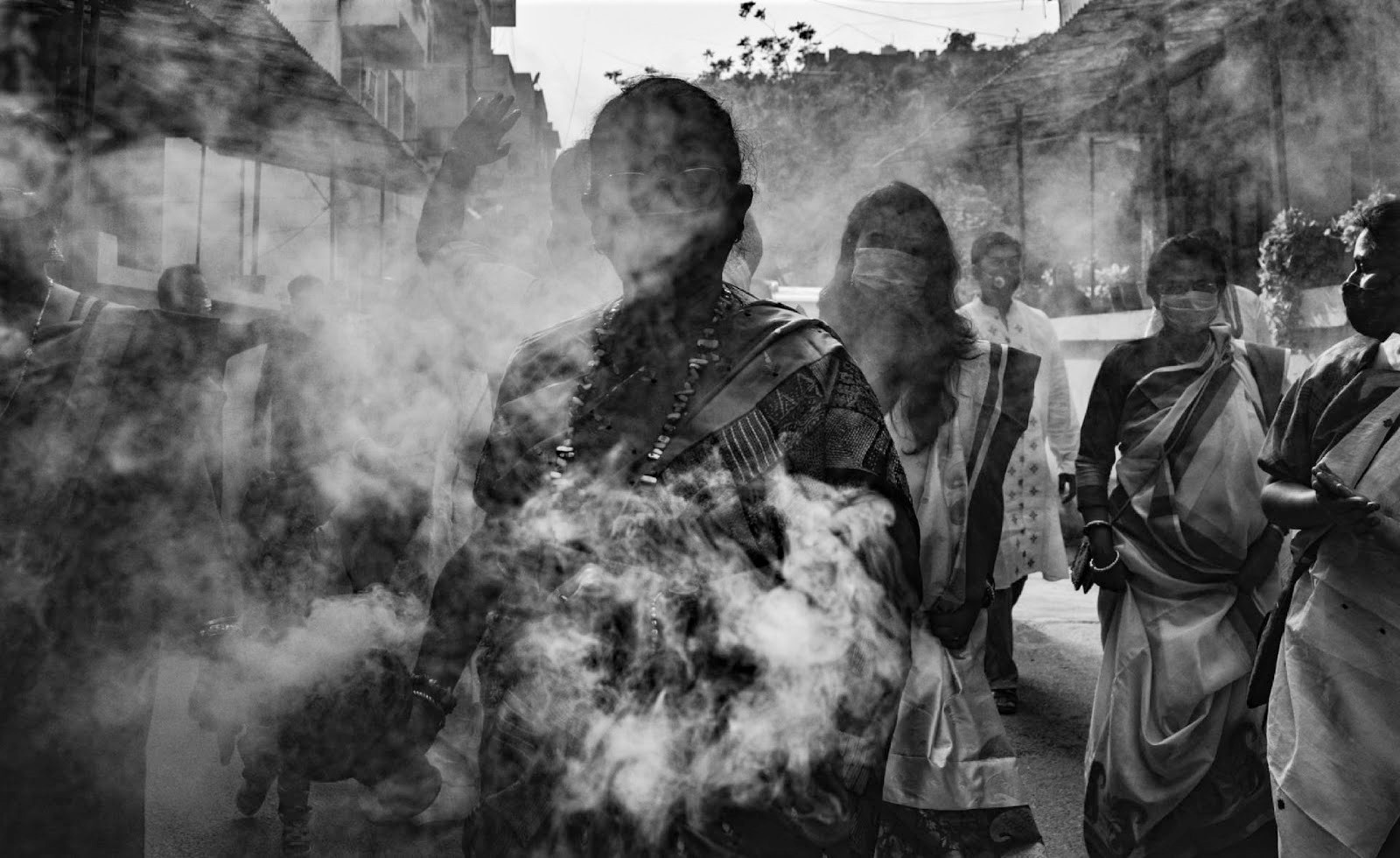 Brampton’s Bansari Shah sits by the phone with her parents waiting in anticipation for news of their relatives in India.

She can breathe a sigh of relief on this day – no updates. No news is good news for the Shah family and thousands like theirs across Peel.

India, the land where more of the region’s residents trace their roots to than any other place in the world, is under seige.

Each day for more than two weeks the COVID-19 crisis in India has been highlighted by ominous records.

On Friday there were more than 414,000 new infections reported in the nation of almost 1.4 billion souls. Some healthcare officials estimate the daily numbers could actually be well over 1 million, but only a fraction of cases are recorded.

In Canada, there have been about 1.3 million infections since the start of the pandemic.

The second most populous country in the world has become the latest symbol of the horrors of COVID-19. The lack of oxygen for medical use has led to shockingly inhuman scenes, as citizens die on the streets outside government-run hospitals that can do nothing for them.

“It's obviously... nerve racking, because all the phone calls you get, hopefully it's positive, not negative,” Shah says.

She and her parents came to Canada about 14 years ago, leaving behind all their immediate family in Mumbai, the country’s hardest hit city, and Anand. Her family has lost two uncles and a grandfather to COVID-19 over the past year. Due to travel restrictions they were not able to attend funerals or ceremonies.

They support family from afar, over the phone, which has turned into a daily ritual.

“I feel like you're still together even though being this far away,” Shah says.

Jinal Patel, a fellow Brampton resident, checks in with family as much as possible. Her grandmother is one of the only relatives still in India. She lives by herself in the small town of Chijgam, outside Navsari.

As reported by the Bing COVID-19 tracker there are currently 5,000 confirmed cases in Navsari. The state, Gujarat, has been one of the hardest hit, with 12,545 confirmed cases May 6. This is actually a slight decrease from previous days and offers some hope that the numbers will start to come down from the unimaginable toll the disease has taken across much of the country over the past few weeks. 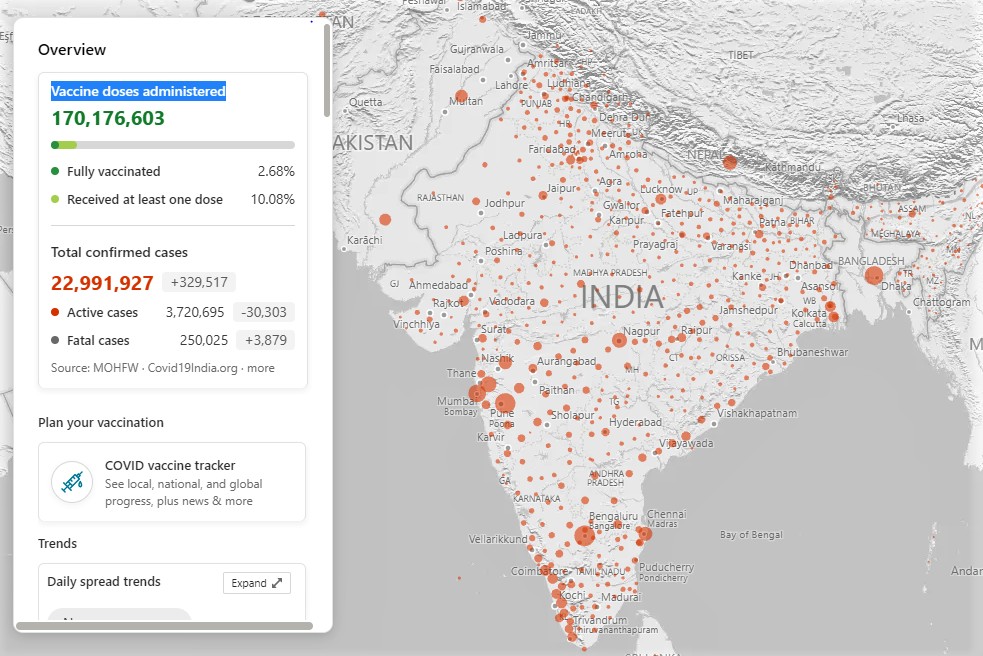 India is home to 1.4 billion people, so the recent spread of the virus could have lasting effects across the country.

It’s been really difficult for Patel to see her grandmother grieving alone – in February, her husband passed away from complications not linked to COVID-19.

“It can be really hard knowing that someone is alone there at this point. I guess just having that mental support through religion, because in India, religion is really big, and through faith that’s our one go to while talking to her and giving her that support she needs,” Patel says.

Patel’s mother speaks of keeping the faith and having a “warrior’s” mentality.

Janki Acharya’s mom’s entire family in India tested positive for the virus in December, after a funeral for another family member. They live in the City of Patan, in Gujarat, which had 9,403 cases as of last week. Her grandparents were the most severely affected and were hospitalized for weeks. Her grandfather was on a ventilator and they didn’t think he was going to make it.

“They were saying, it's like 50/50 if he even survives, but luckily he did survive during those times and we were able to get him back,” said Ancharya, who lives in Brampton with her parents.

She describes tense conversations while her mother is constantly on the phone, hoping and praying that her family will be alright. To send help Patel is a member of the BAPS Charities raising funds for India.

Dr. Madhu Shankar Dewan has been on the front lines of India’s healthcare response since the very first case that was reported in the country. Despite testing positive himself and isolating for 15 days, he continues to go to work in the Sikh holy city of Amritsar, in Punjab.

“I'm on duty everyday, and many other people like me are on duty, the health workers are the backbone of India at this time,” he said.

Photos of mass cremations across the country have shaken the world and showcased just how dire the situation is. In Hinduism, cremations and ceremonies for the dead are extremely important and have been happening “round-the-clock” as BBC News reported.

Many healthcare professionals didn’t even have time to process how devastating new variants of the virus would be in India.

“We were just taken for a shock when the patients started to rise and they didn't give us a time to react,” Dr. Dewan says.

On May 6, India's National Centre for Disease said the B.1.617 variant is a major factor for the rapid viral spread throughout the country. The federal government is resisting another nation-wide lockdown because of the impact it would have on the economy, a decision that has drawn international condemnation.

In Amritsar, where Dr. Dewan lives, the government has imposed nightly curfews to curb the spread. Dr. Dewan told The Pointer he believes things will start to “normalize” around May 15.

Brampton Councillor Gurpreet Dhillon has been in touch with Dr. Dewan, and is assisting to raise funds for his organization. Originally, the maxillofacial surgeon’s charity was created to provide free cleft lip and palate surgeries for children. The Muskaan Foundation, which means smiles in Hindi, is now putting their donations toward oxygen concentrators, medicines and free ambulance transportation for patients to the hospital.

“Whatever little funds we have, we are doing our best,” he said.

Councillor Dhillon’s participation was prompted by all the stories he’s been hearing from his constituents. As of May 10, he has helped raise nearly $40,000. 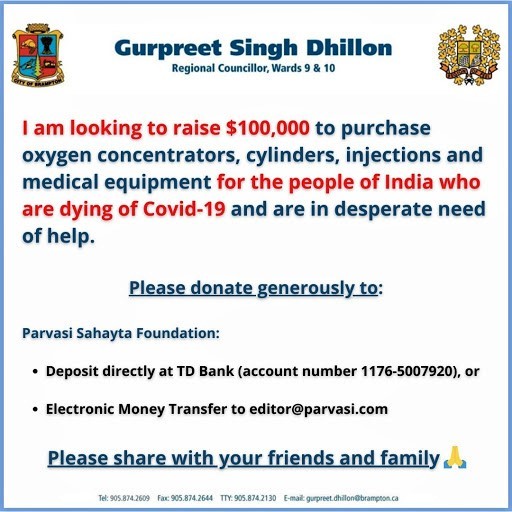 Councillor Dhillon put out a tweet to ask people to help donate to India.

“It's really touched everybody, not just in wards 9 and 10 but the South Asian community across the city,” he said.

In March 2020, The Pointer published an article on how the pandemic in India could drastically change overnight. The country of almost 1.4 billion people with high poverty rates and a fragile healthcare system was the world’s ticking time bomb.

Prime Minister Narendra Modi announced the strictest, military-driven lockdown in the world at the time. The 21-day lockdown left thousands of visitors to the country in limbo, including 21,000 Canadians. This included Brampton and Mississauga residents who have slowly made their way back home from their motherland.

At the time, India was only reporting 887 cases, a number that experts said was wildly inaccurate. There was skepticism over the lack of testing being done during the first few months of the pandemic. Hospitals had started  reporting patients, who likely had never been tested for COVID-19, showing symptoms of the disease that were getting worse by the day.

But by the late winter of this year, Modi and his government began to claim they had defeated the pandemic and the worst was over. They had no idea what was in store.

The country’s leader has faced global criticism for allowing and attending large state-political rallies ahead of recent elections and telling Indians it was okay to gather in large numbers for religious festivals that took place.

Meanwhile, the virus and its variants were about to explode across the country.

On May 6, The World Health Organization reported that India had 414,188 new cases in the last 24 hours. There were 3,915 souls lost to the disease in one day.

As they watch the crisis in India unfold, families like Shah’s know if the phone rings, it’s likely more bad news.