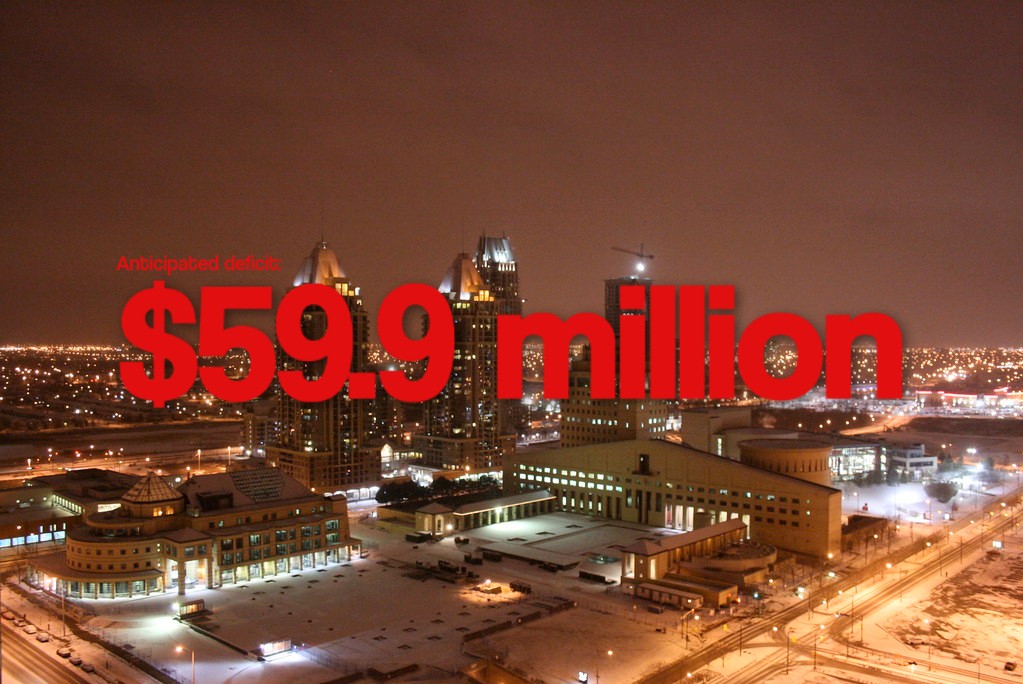 Photos from City of Mississauga/n.karim/Creative Commons

No one in Mississauga likes virtual budget meetings. They mean hours sitting in front of computer screens, distorted audio connections and yet more bad news.

In April 2020, councillors gathered for their first ever online budget meeting. They watched aghast as staff outlined how the City of Mississauga could lose almost $60 million by the end of last spring as COVID-19 restrictions closed recreation and made transit ridership free. Optimistically, staff projections modelled financial impacts based on physical distancing measures remaining in place until the end of April, May or June 2020.

Surely it couldn’t get worse? A year later, Ontario is, once again, under almost precisely the same measures as when the pandemic first hit. Staff projections for the 2022 budget season are as bleak as they were for 2021.

The anticipated shortfall at City Hall by the end of this year is estimated at $59.9 million, largely as a result of reduced transit and recreation revenues, the same factors that caused a major deficit headache in 2020. Further financial pressures are expected to come from Mississauga’s complicated relationship with Toronto Pearson Airport. 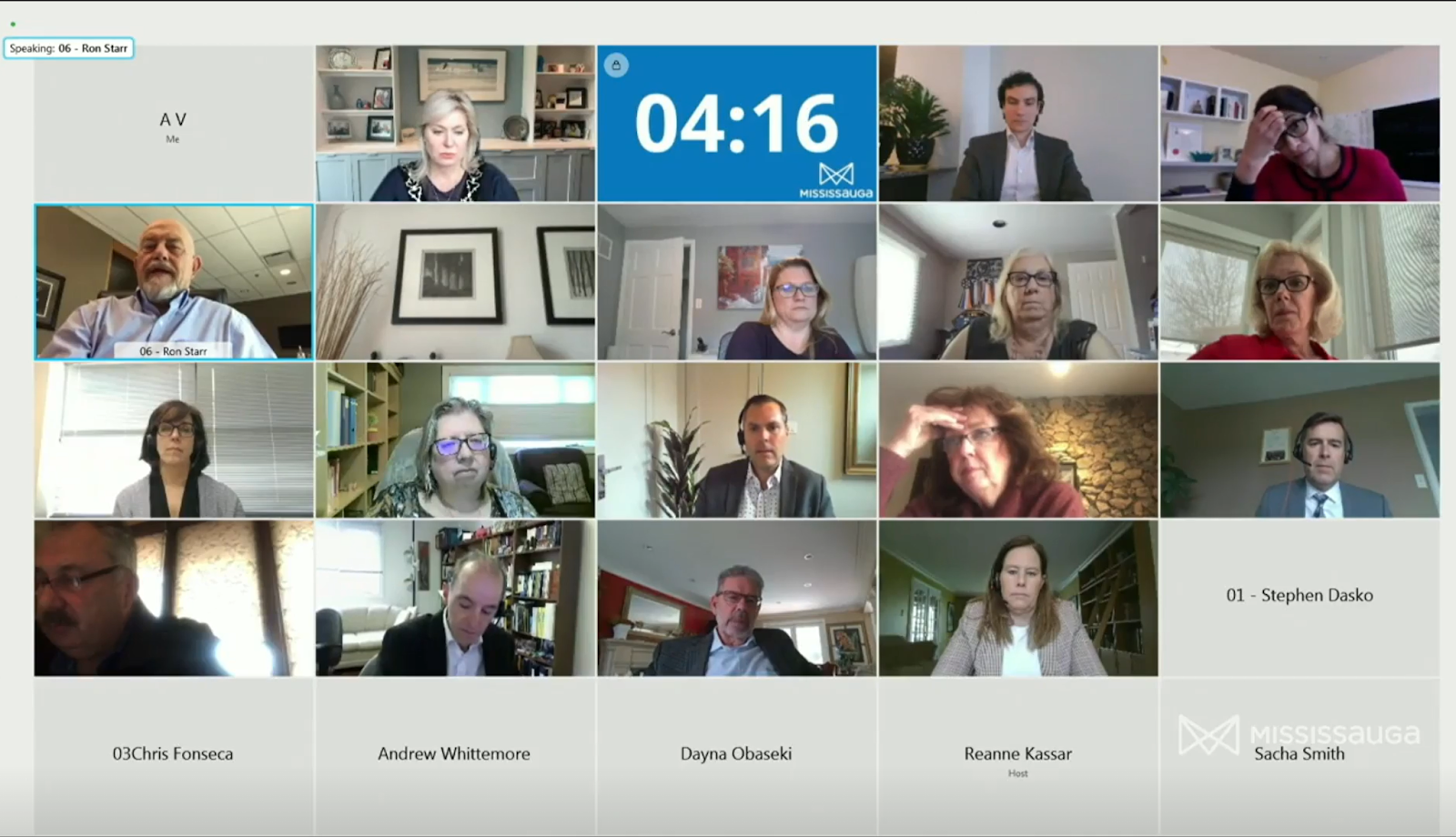 City staff are predicting Mississauga will have a deficit of almost $60 million by December.

The estimate could increase or decrease significantly, depending on future COVID-19 case counts and the need for restrictions. Calculations were made before the current provincial stay-at-home-order was announced, which could lead to more financial hardship. With transit losses driving 40 percent of the City’s projected $93.4 million in losses before mitigating actions are taken into account, limitations on movement are a key factor that could continue to drain City Hall.

Viewed more positively, a successful vaccine rollout and rapidly returning resident confidence could leave the City in a better position than it currently anticipates. A significant barrier to its transit ridership is how safe the public feels.

MiWay’s projected loss of $41 million comes despite the City’s bus service trimming its budget by more than seven percent for 2021. Recreation is expected to lose $28.5 million, parking and licensing could lose $7.9 million and pandemic-related costs like PPE will come with a negative $4.1 million price tag. 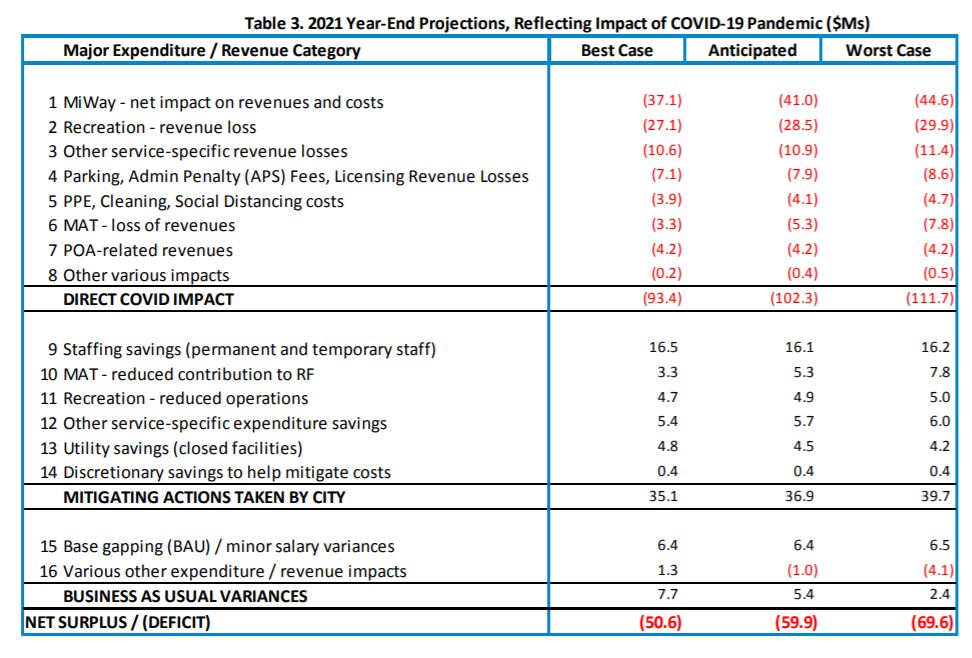 Staff are projecting large shortfalls in recreation and transit.

“This year, I have to admit, it's a little bit less confusing, but probably more frustrating,” Jeff Jackson, director of finance and treasurer, told the budget committee.

In 2020, Mississauga laid off around 2,000 part time staff among other measures to stop the bleeding. By December, thanks to significant funding from other levels of government eventually announced over the summer, a deficit of $55.5 million was recovered to leave a balanced book.

Now, the City faces the same challenge. A series of funds have been announced by the provincial and federal governments, but City Hall is waiting to see if eligibility rules can be relaxed to allow Mississauga to take full advantage of assistance from Queen’s Park and Ottawa.

As of March 31, 2021, Mississauga has been allocated a total of $100.4 million in support from the provincial and federal governments. In total, $35.1 million was used to offset 2020 deficits, leaving $65.3 million to help in 2021 and even 2022. Each portion of funding comes with specific strings attached, particularly the Safe Restart Phase 2-funds which can only be applied to deficits up to March 31. As a result, if the rules remain as they are, $19.9 million of the City’s total could not be claimed.

This would suggest that, assuming no changes to the rules, $45.4 million of relief funding would be available to offset the projected 2021 deficit. “We anticipate that the safe restart funding will eliminate the forecast deficit,” a City spokesperson told The Pointer. “It is very early in the year and there are still many unknowns. That is why it is important to update Council in June.” 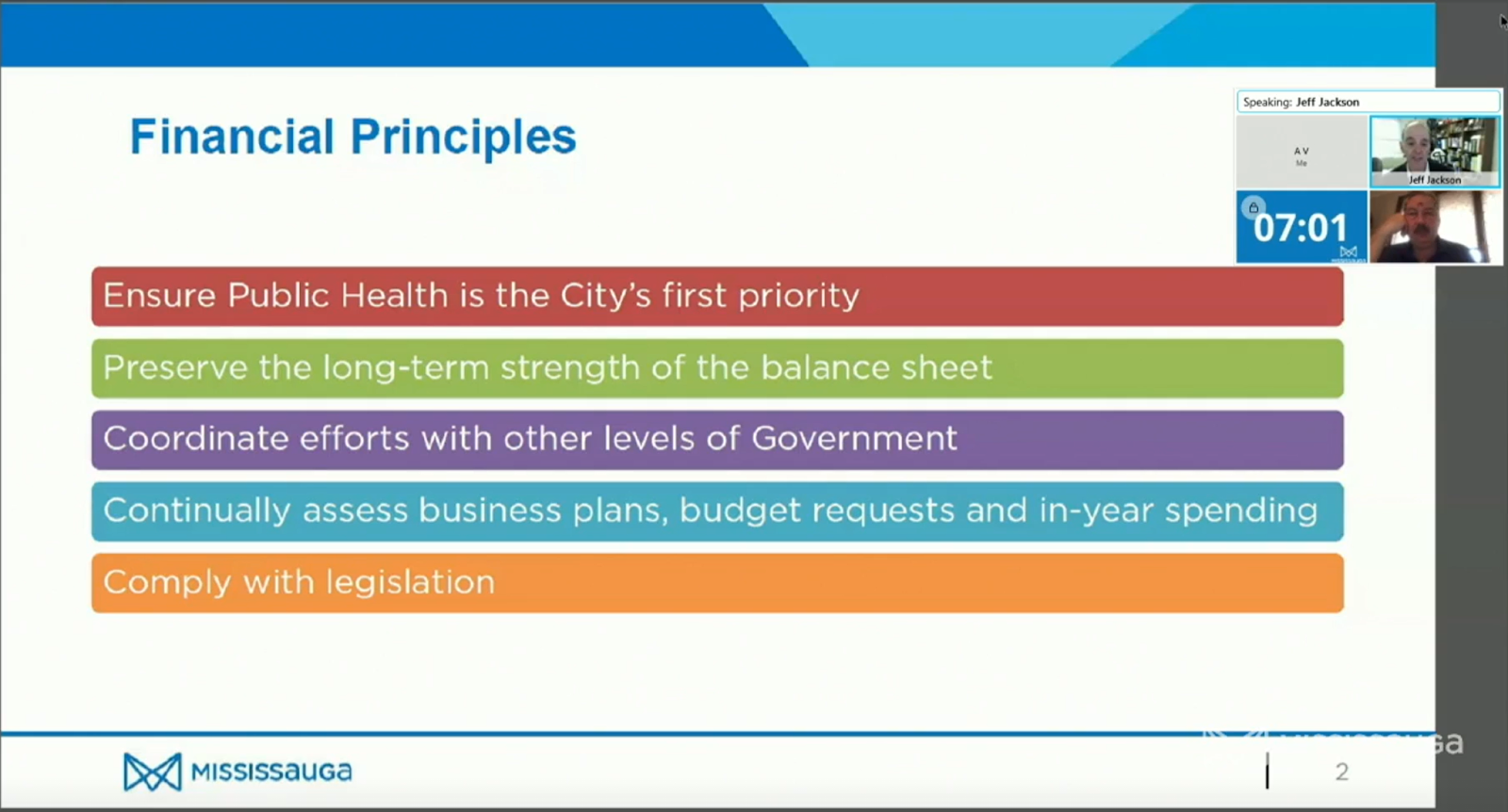 A year after their first virtual budget meeting, councillors endured another set of dire projections through Webex.

One area of the upcoming budget that is less ambiguous than transit or recreation is losses relating to Toronto Pearson Airport. Located in the north east corner of Mississauga, Pearson is causing staff a financial headache in excess of $22 million dollars.

Payments in Lieu of Tax (PILTs) are paid by Pearson Airport to the City of Mississauga in place of standard commercial property tax. The system means the airport pays $0.94 per passenger moving through the airport, with a maximum payment increase of five percent per year. The caveat is that there is no limit to how far payments can fall, meaning that drastically lower air traffic at Pearson as a result of the pandemic will damage the city for years to come (read that story here).

PILTs operate on a delay, so 2020, a terrible year for air travel, will impact Mississauga in 2022. During the first year of the pandemic, passenger traffic fell 75 percent at Pearson Airport, resulting in an impact on Mississauga of just over $22 million for 2022. Because of the upwards cap, which dictates that tax revenues cannot increase by more than five percent a year, even if passenger levels go up by much more than that, the loss will be $21.8 million in 2023 and 21.3 million in 2024.

Staff had hoped the provincial budget would make changes to PILTs, to remove the upward cap or increase it significantly, but it didn’t happen. A vague promise to help out has come from Queen’s Park, but details are scarce.

“We received notification from the Province last month that they were aware of our loss of GTAA (Greater Toronto Airports Authority) revenue and it indicated a desire to assist,” Jackson told councillors. “We don’t know what they have in mind. It could be anything from removing the cap to changes to the PILT formula to grants.”

Ward 5 Councillor Carolyn Parrish, who represents the area where Pearson Airport is situated, said she “wouldn’t hold my breath”.

“That thing is going to be a disaster,” she added. 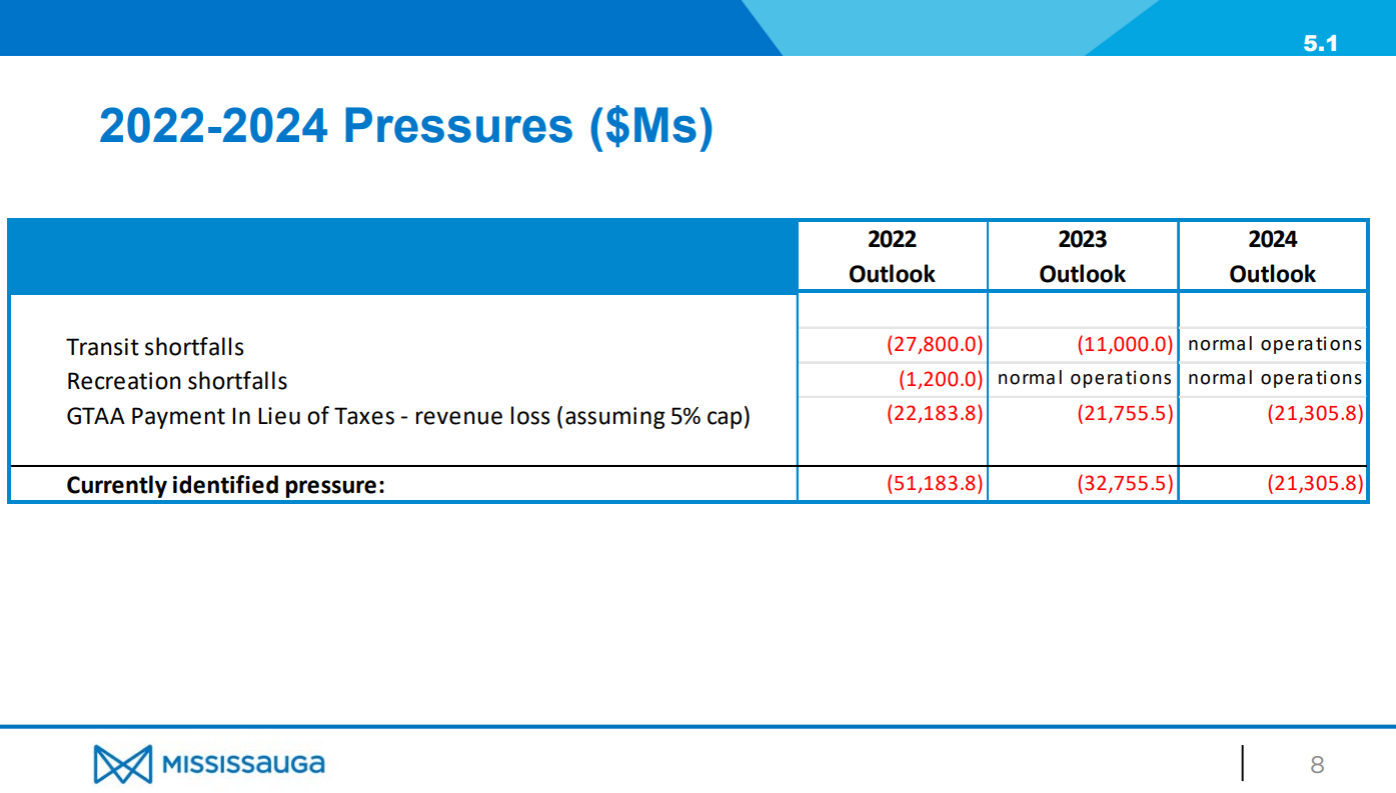 A five percent cap on PILTs means Mississauga is facing a significant budget issue for the foreseeable future.

To make the situation more complicated, Gary Kent, Mississauga’s chief financial officer, will be departing the City to take on a new role at the Region of Peel on May 10. Kent, also the commissioner of corporate services, is a regular voice on financial planning for the City and has taken a particularly prominent role in efforts to deal with the impending PILTs fallout.

“As demonstrated from today’s Budget Committee meeting we have a seasoned and experienced Budget Team with diverse talents and strengths,” Paul Mitcham, Mississauga CAO, told The Pointer by email. “This team has collectively navigated the City’s budget through pandemic. We have started early and will continue to keep our Council up to date with real-time information.”

The City is hoping to fill Kent’s soon-to-be-vacant role by the end of May.