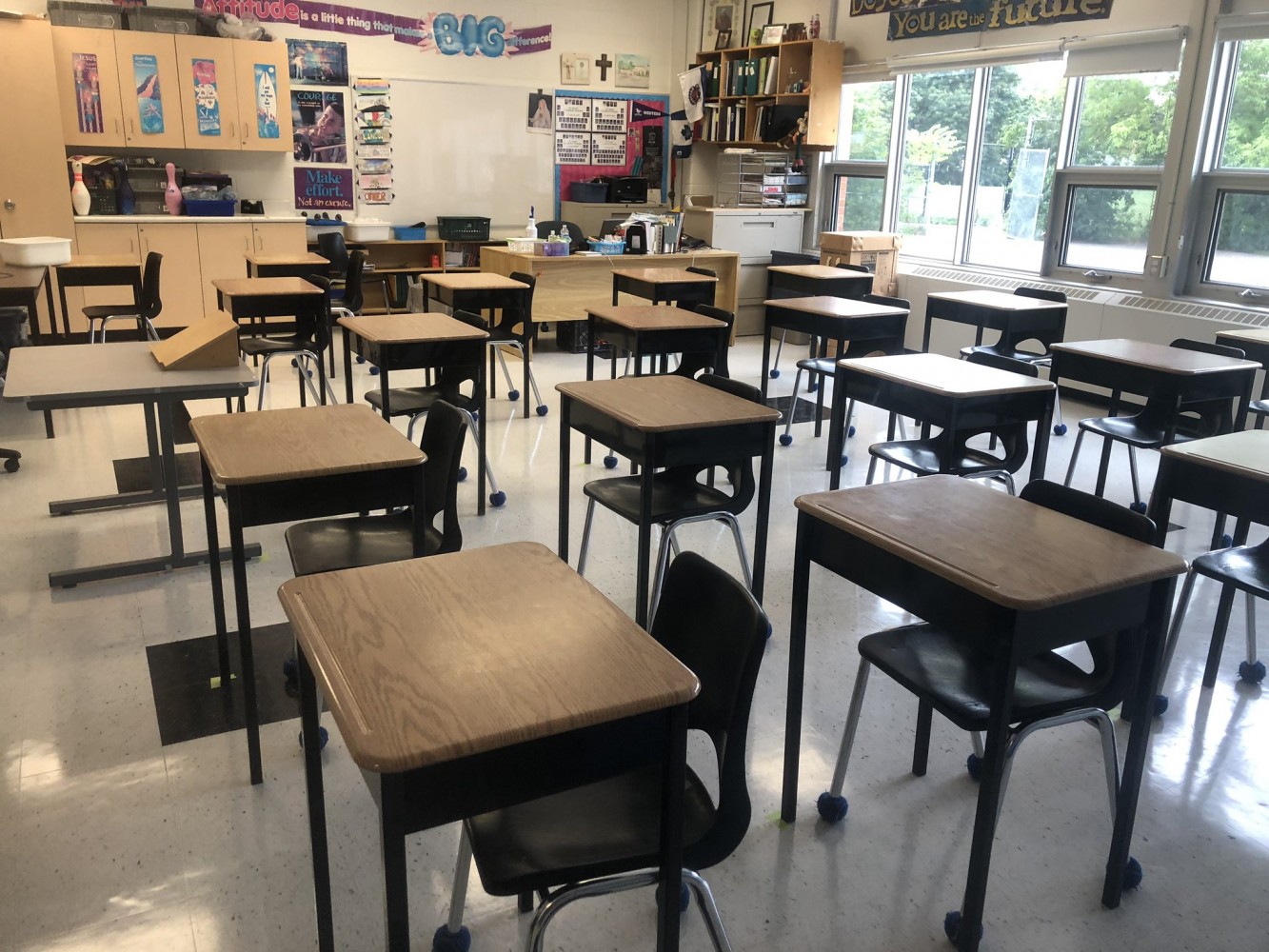 Photos from Government of Ontario/Twitter/DPCDSB

Peel residents saw the writing on the wall at least a week earlier than the Province.

On Monday afternoon, Ontario Premier Doug Ford, alongside Education Minister Stephen Lecce, announced all schools in the province will be moving online indefinitely after the April break as a result of rapidly rising viral transmission and recent hospital ICU admission trends.

“No one wants our kids in school more than I do,” Ford said. “That's where they belong. But with COVID spreading like wildfire. With these deadly variants taking hold in Ontario. We simply can't be too cautious right now.”

As of April 12, there were 619 patients with COVID-19 in Ontario ICUs, the highest seen since the pandemic started, and 1,646 people hospitalized due to COVID-19. The Province reported 4,401 new infections Monday, a near record-breaking number, trailing behind the 4,456 cases reported on Sunday. There were 772 new cases reported in Peel, where hospitals are operating beyond their ability to provide a basic standard of care.

“So, it’s not looking good right now,” Brampton Civic Hospital emergency doctor Kashif Pirzada told CityTV Monday. “It’s crazy. A lot of us are being drafted to work in ICU. Every space in the hospital is being used, even the operating room, the room used for heart attacks is being used. Every last space.”

With the alarming situation facing the province’s healthcare system, the PC government was forced to make a decision about the upcoming plans for in-class education.

“Today we have kept our schools safe, today's announcement is about prevention,” Lecce said Monday. “It is a proactive and sadly necessary precaution as we tackle the third wave of COVID-19. Cases across Ontario communities are rising quickly, and the new COVID-19 variants pose a serious threat. As we tackle the broader situation by pivoting to remote learning, we can support our collective fight, and our effort to defeat this pandemic.”

Although the majority of the province has seen minimal outbreaks in schools, that has not been the case in Peel, where the local Catholic board alone recently had 26 percent of the province’s school closures. Currently, almost 27 percent of publicly funded schools in Ontario have a reported case (1,302 out of 4,828).

The news comes a day after Lecce reassured parents and students that schools would remain open after the current break.

Minister of Education Stephen Lecce released a two-page plan outlining precautionary measures schools across the province were taking to ensure the safety of staff and students. Just a day later, the information was outdated.

“What the government should have been doing is making schools safe, and instead, they didn't want to spend money on reducing class sizes to only 15 students per class, they didn't want to invest in the ventilation improvements and making sure every classroom that had windows had windows that were able to be opened,” the NDP leader said during a press conference following Lecce’s announcement. “[They didn’t] make sure that the kids were reduced in terms of numbers of kids on buses by 50 percent, [or make sure] we had rapid testing that was run by the government that was able to be utilized in schools. None of those things happened. Doug Ford didn't want to spend the money on any of those things. And as a result, parents are in a scramble once again.”

Healthcare professionals have been imploring Ford for weeks to close schools, after dangerous updated COVID-19 modelling showed variants of concern (VOCs) spreading rapidly across the GTA transmit more easily and can have more dangerous consequences in some cases, compared to the original novel coronavirus.

The decision to keep classrooms closed might be a relief for some students, staff and parents, but it does little to lift the frustration many have been feeling for months as the Ford government has mismanaged the education file during the pandemic response.

Recommendations by educators, public health officials and Ford’s own table of scientific advisors have been routinely ignored by the PC government. It has refused to enact a law providing paid sick days, it has failed to focus on hotspot areas such as those across much of Peel, it did not provide resources that educators asked for to ensure safety and, most recently, it did not prioritize those working in the education sector for vaccinations.

“That this decision comes less than 24 hours after Minister Lecce said schools were safe to resume post-break further highlights this government’s ineptitude and internal disorganization,” said Ontario English Catholic Teachers’ Association (OECTA) president Liz Stuart in a press release. “This contradictory messaging has been a constant throughout the pandemic, heightening the fears of parents, teachers, and education workers in an already difficult and uncertain time.”

Frustration lingers even after Ford recently announced those 18 and older in hotspot communities, including 25 postal code areas in Peel, will be prioritized for vaccinations. Many educators and newly-eligible age groups have reported confusing and inconsistent messaging from public health officials and difficulty getting vaccination appointments booked.

Despite new vaccination policies that allow those in hotspots to get shots, many are figuring out how to book an appointment through trial and error, social media and word of mouth.

Peel Public Health, under direction from its medical officer of health, Dr. Lawrence Loh, exercised authority under Section 22 of Ontario’s Health Protection and Promotion Act effective April 6, ordering all schools in the region to move online for at least two weeks.

“This closure is a necessary step to protect staff and students in Peel Region. With increasing case counts and the presence of variants of concern, we need to break chains of transmission and keep our schools safe,” he said at the time. “I know this will be challenging for parents to navigate and we appreciate all the sacrifices parents continue to make as we continue to fight COVID-19 in our community.”

As of Monday, the directive will remain in place indefinitely.